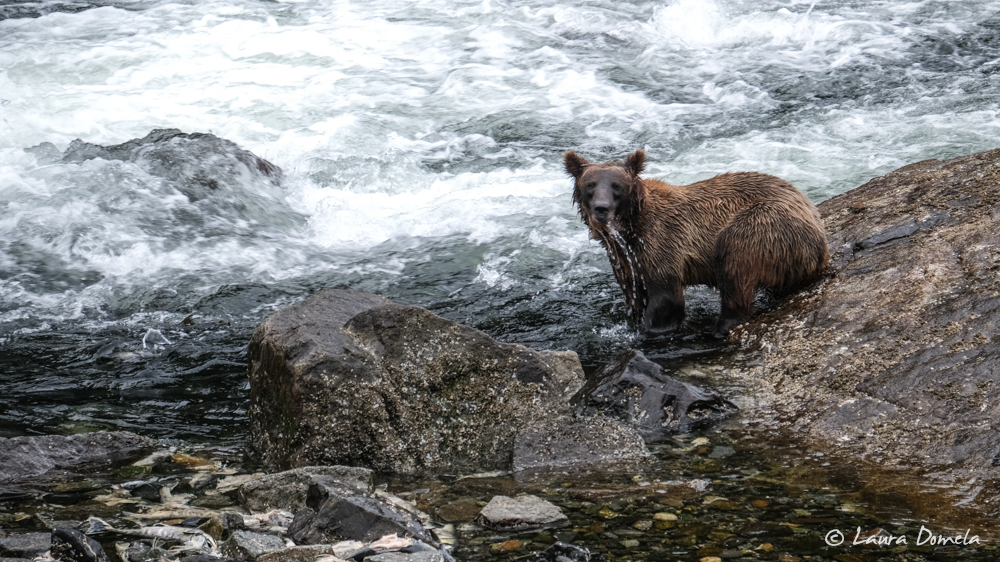 After spending a handful of days in Juneau, we left and headed for Sitka, where we docked Airship for two whole weeks! Kevin had a work thing going on that we needed reliable internet for (and an airport for a trip to San Jose) and we’d already been in Juneau for a handful of days, so a change of scenery would be nice. We spent some more time wandering around town, but the big drama was that an old wooden fishing boat (F/V Zarembo) sank in its slip on the next finger over.

The folks on Salvation eventually got Zarembo partially floated and then towed it over to a nearby beach where they demolished it. Bummer!

Kevin’s brother Craig flew into Sitka (arrived August 2)  to spend a couple weeks with us, and we spent a day showing him the town before we headed out with friends Julie and David (on M/V Dog Star).

We walked the trails at the Sitka National Historical Park, (where by the way, ALL trails are now temporarily closed due to bear activity), and then made a stop at the Sitka Sound Science Center.

The hatchery at the Sitka Sound Science Center was hoppin’ with fish!

We had a fun appetizer dinner with Julie and David the night before we headed out. Spot prawn salad rolls, smoked king salmon and cream cheese, and crab toast! 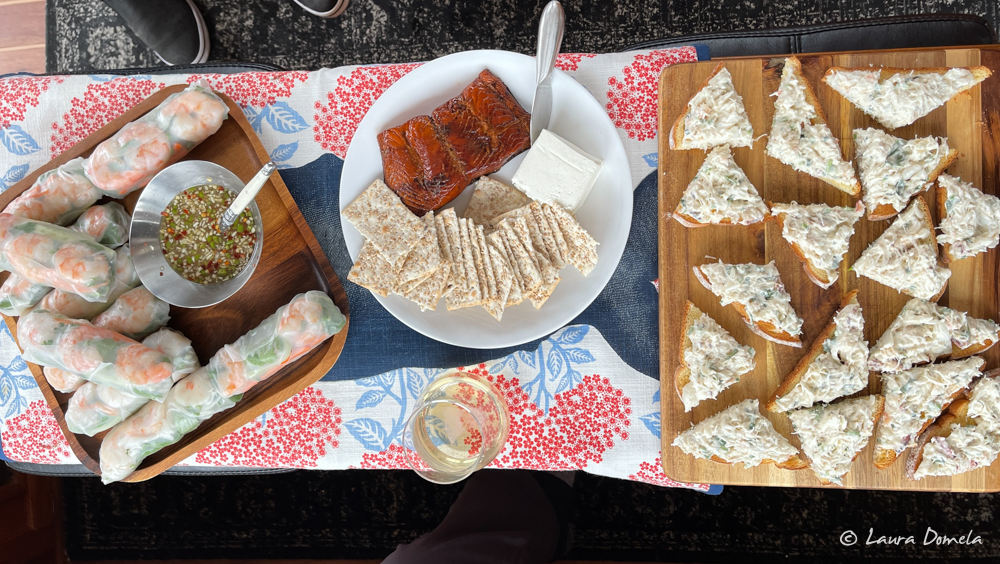 We originally were hoping to take the outside route down the west side of Baranof Island, but the weather was not cooperating (at all) so we headed back through Peril Strait to revisit some of our favorite spots.

Our first stop (after an overnight in Appleton Cove) was Ell Cove. We love Ell Cove (especially when we have it to ourselves like we did this time, since it’s a fairly tight anchorage). After we were anchored and Dog Star was rafted to us, we all dinghied over to Hidden Falls to tour the hatchery and watch bears. 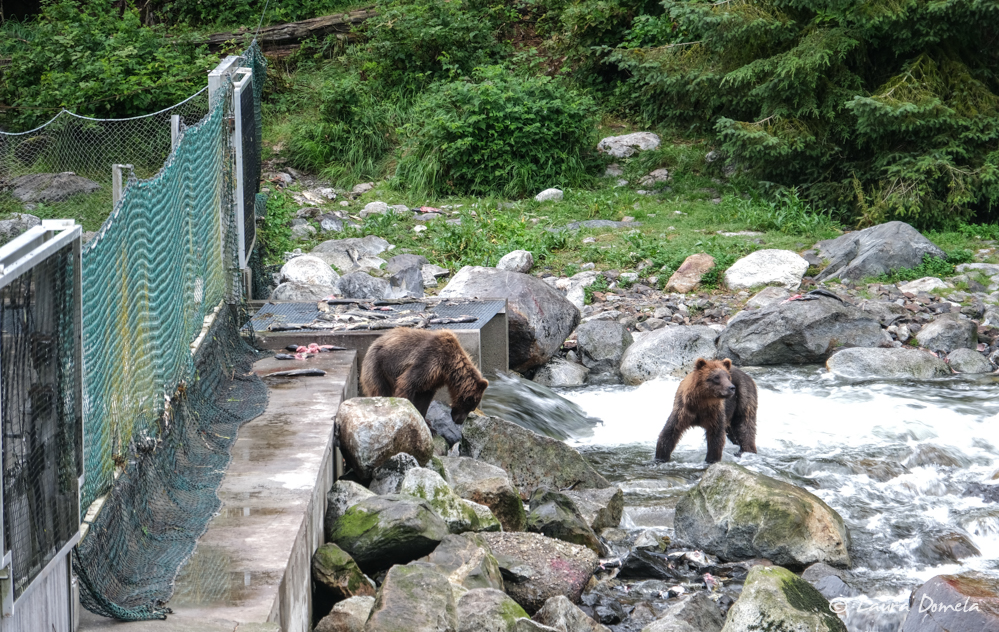 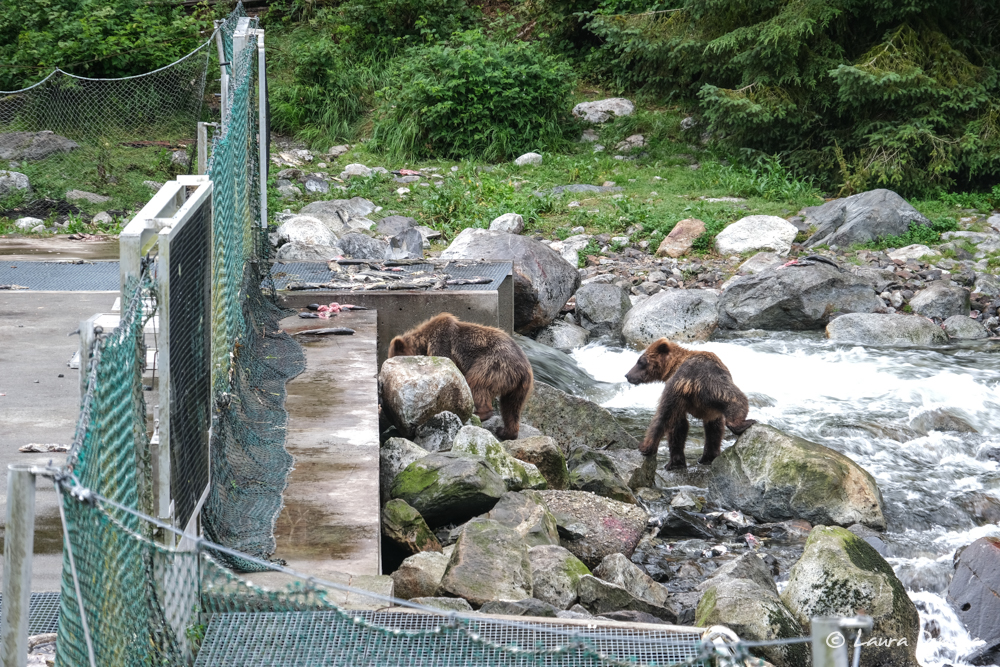 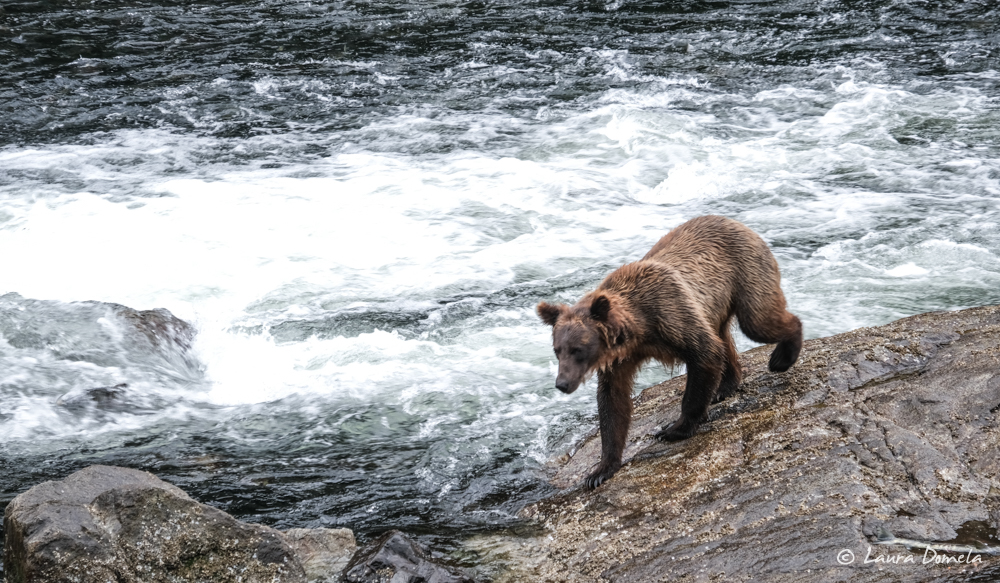 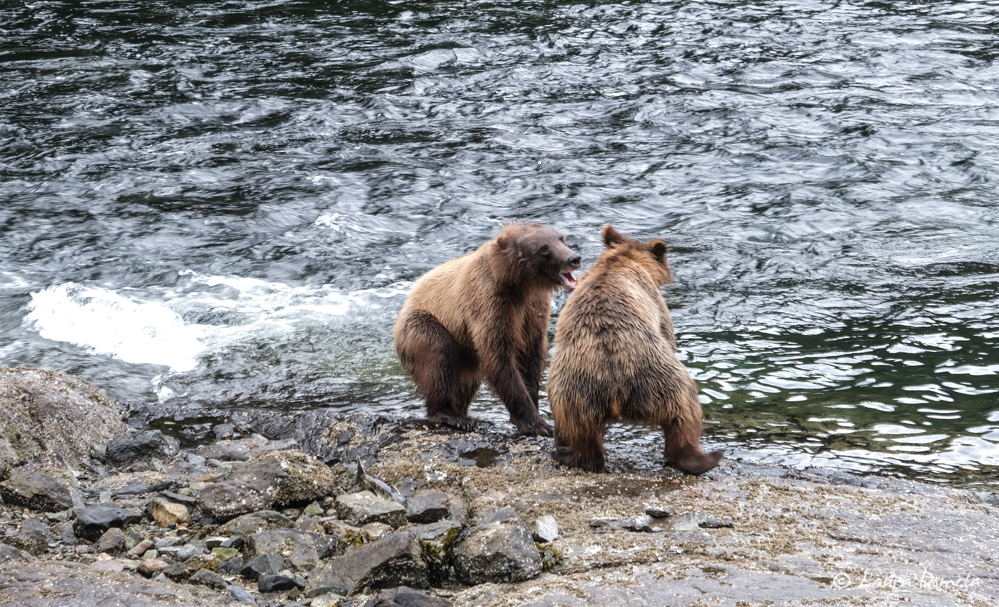 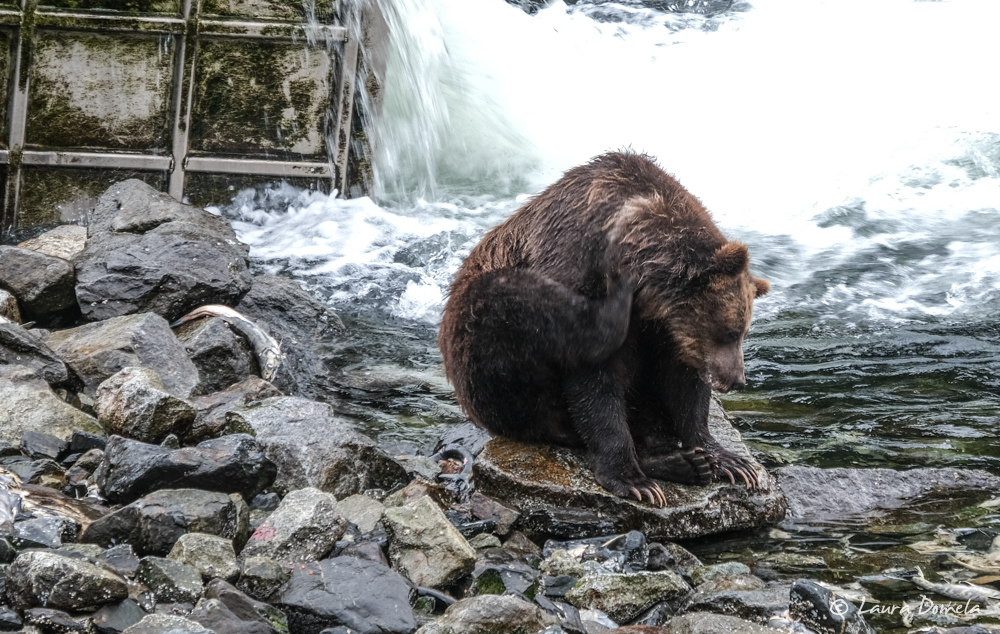 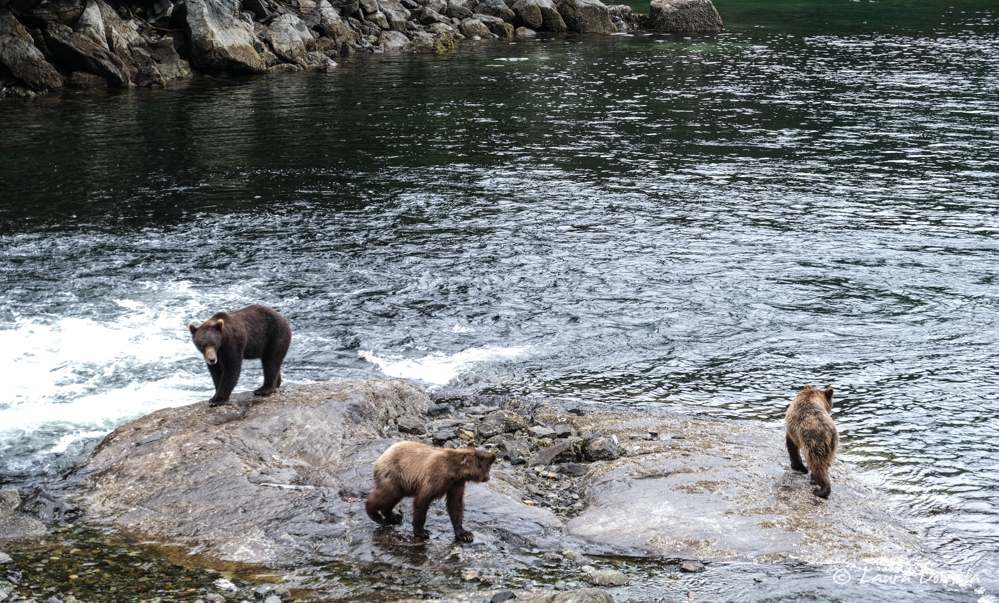 These bears seem to have all they can eat at this point….they catch a fish, and if it’s a female they bit out the eggs so they splat all over the rocks where they can lick ’em up. If it’s a male, they just let it go. 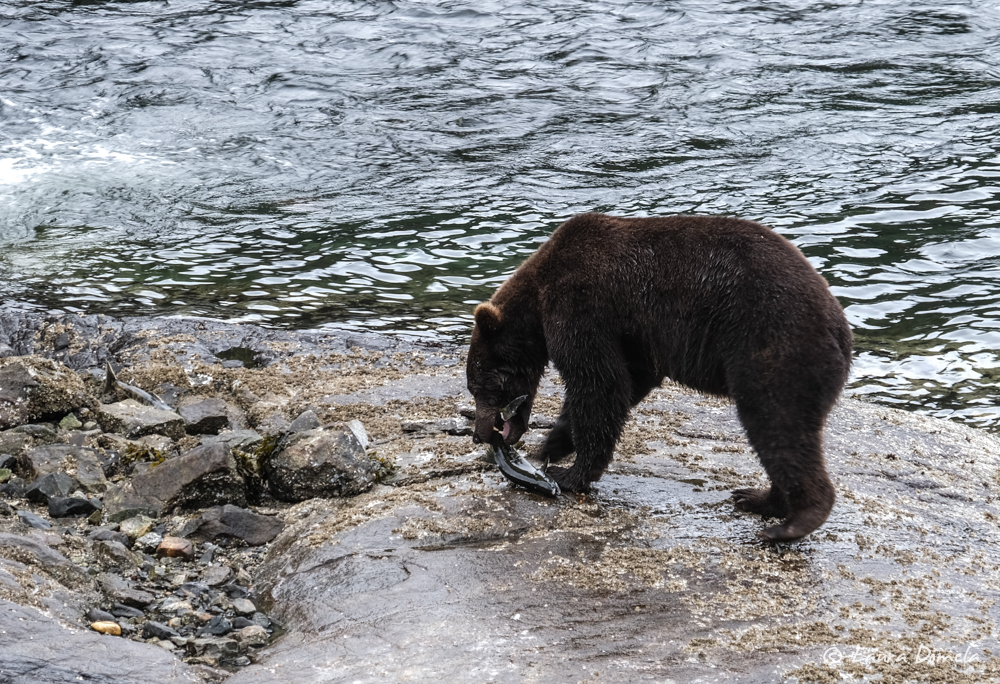 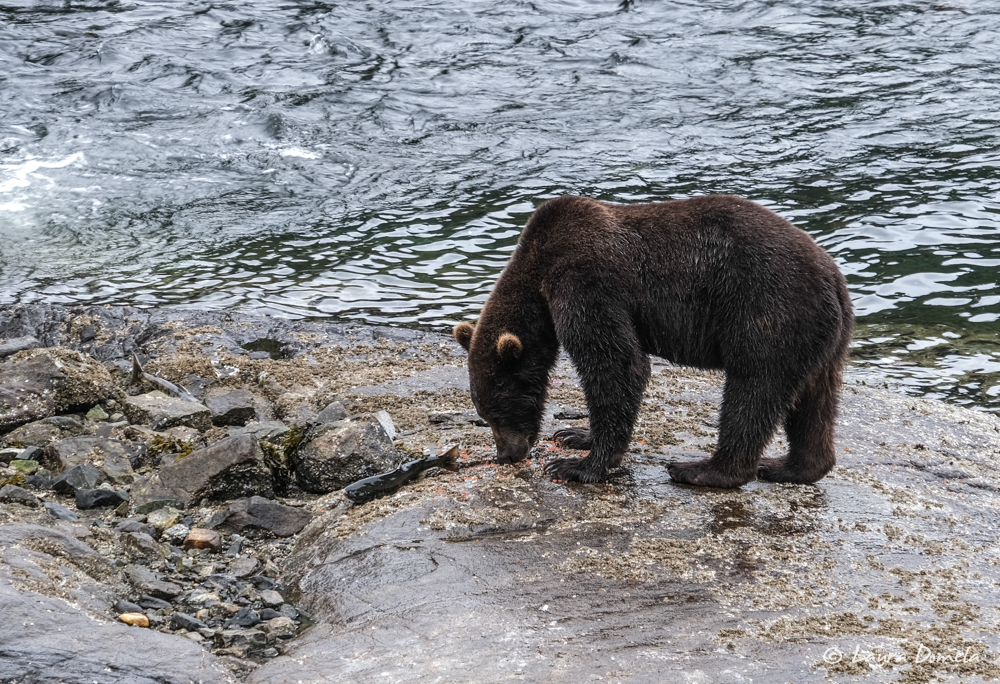 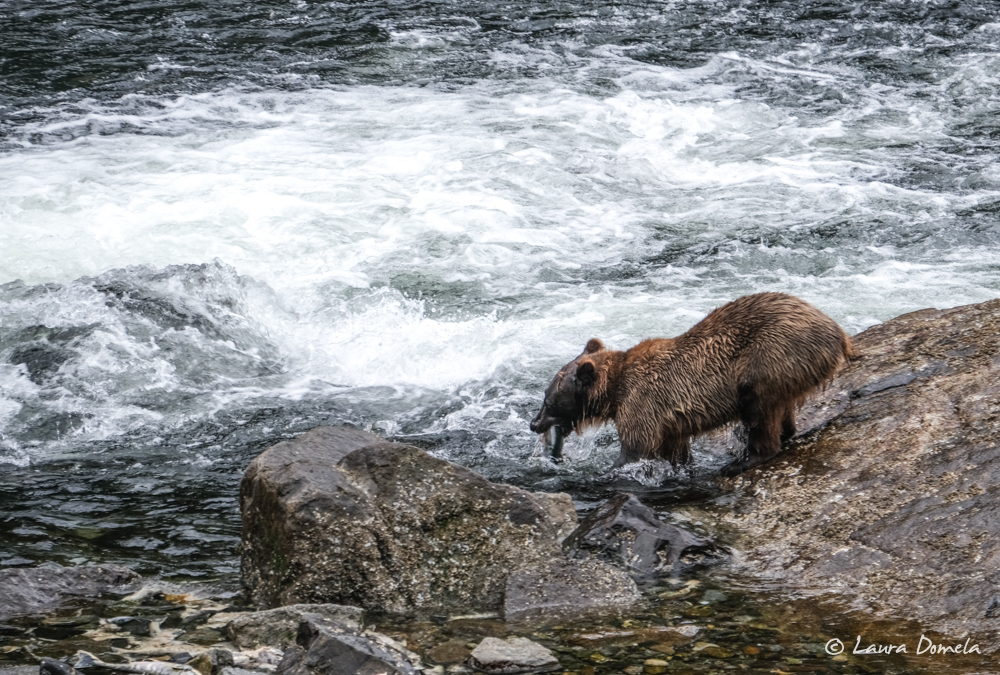 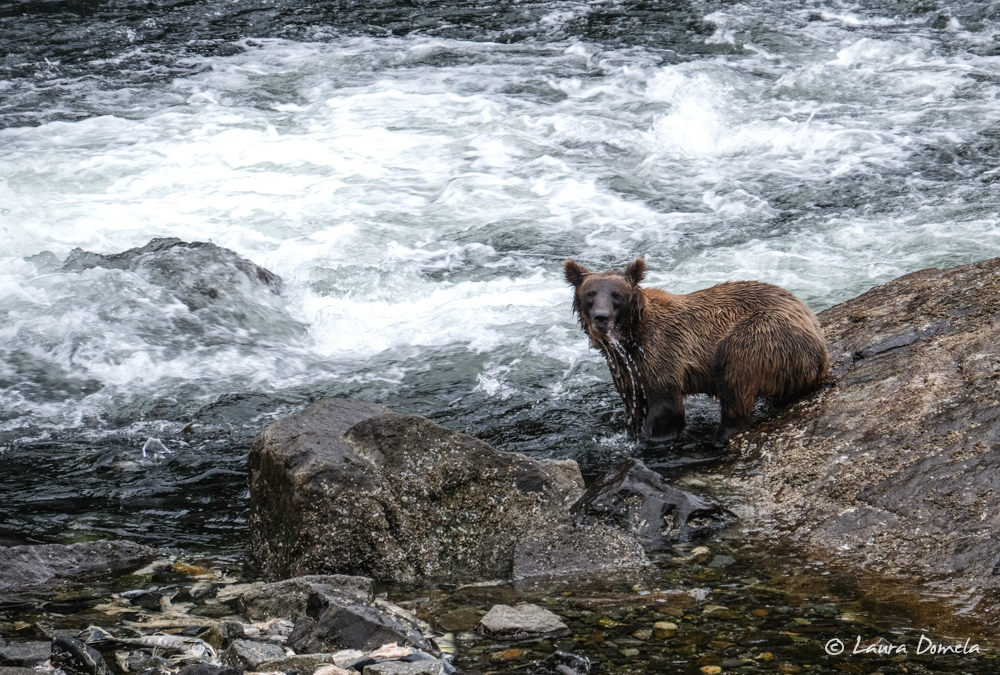 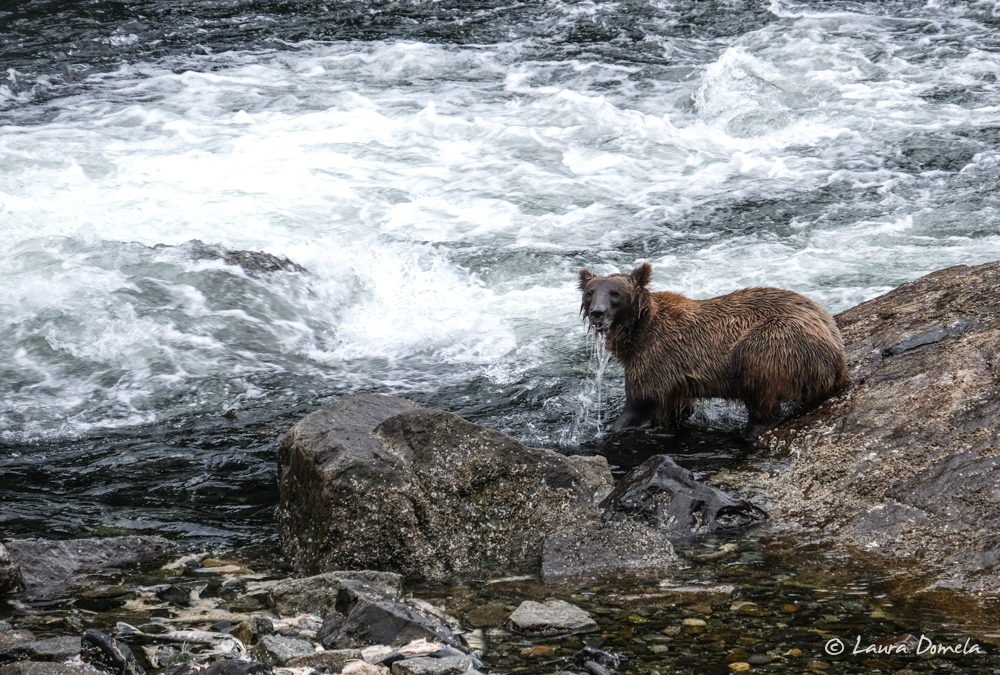 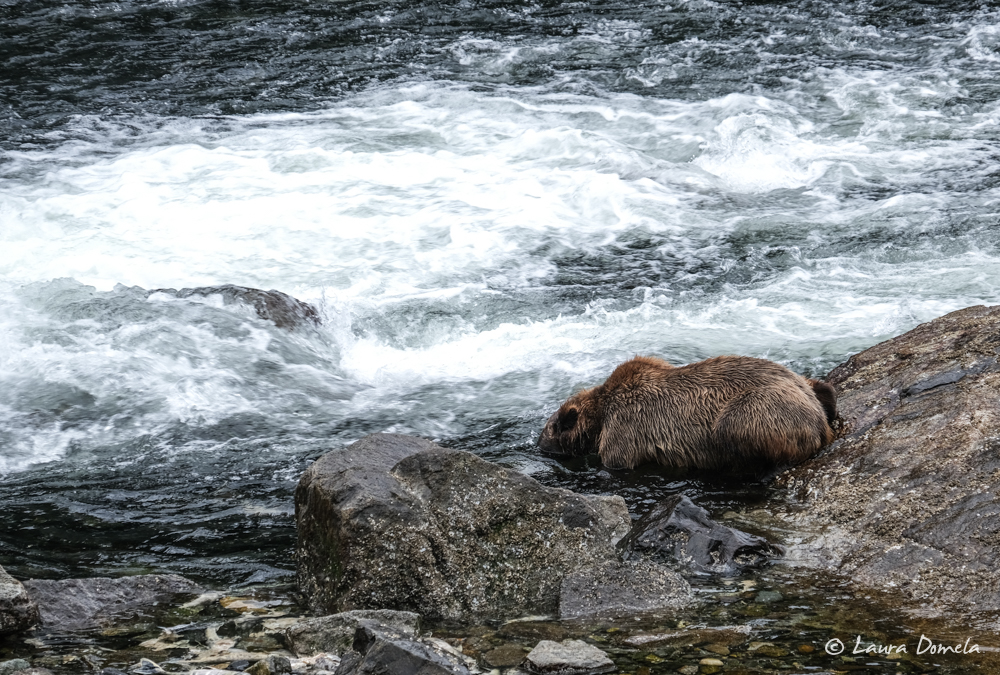 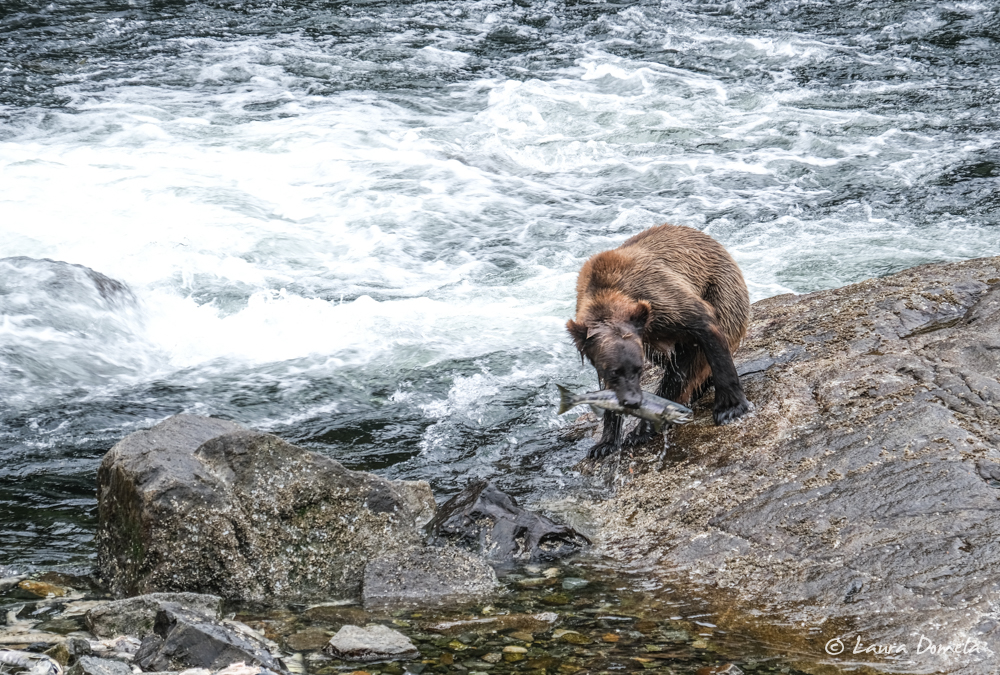 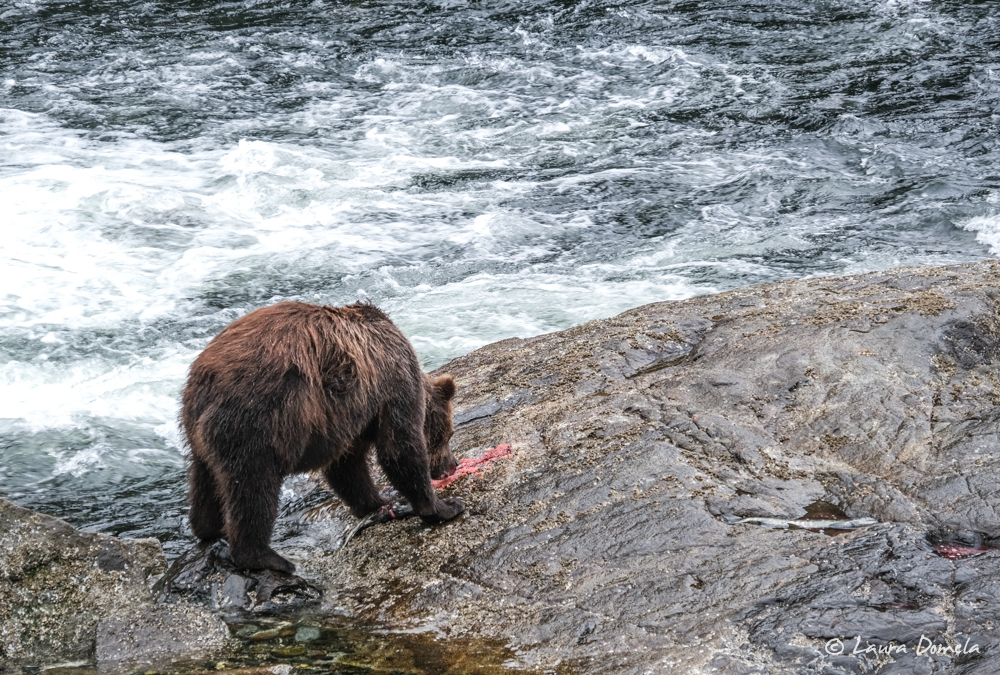 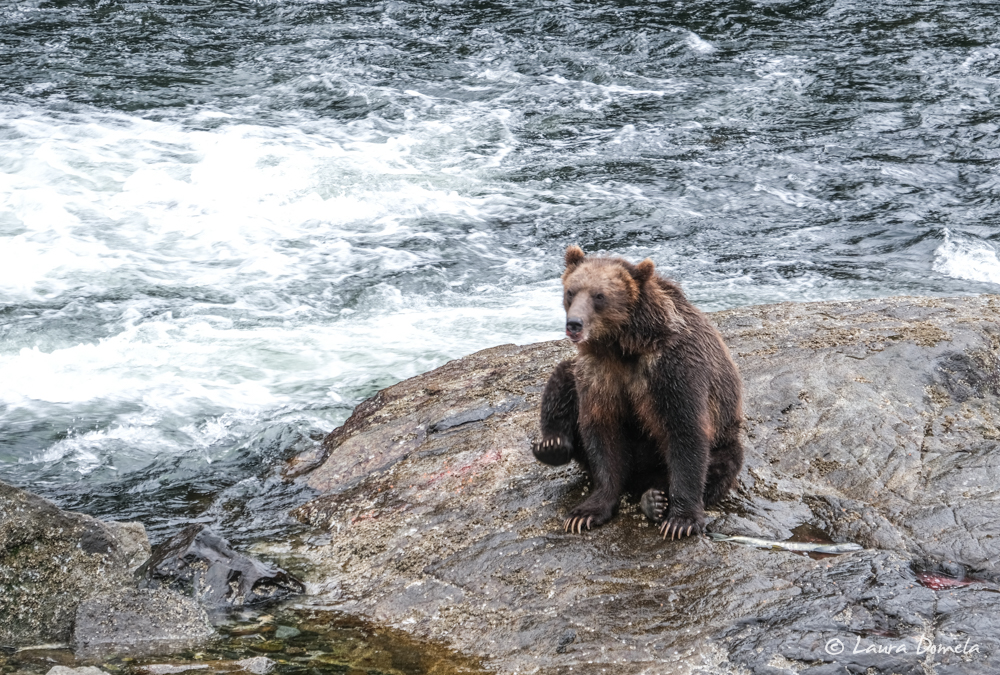 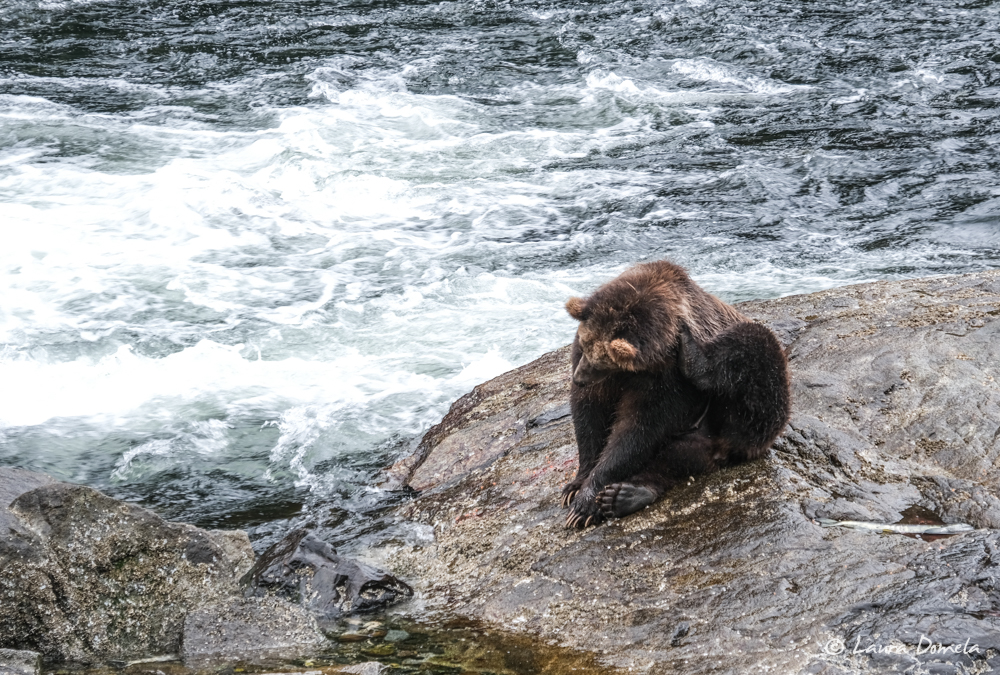 These two were hoping to use the net as an aid to corral the fish, but this strategy didn’t seem to pan out for them while we were watching: 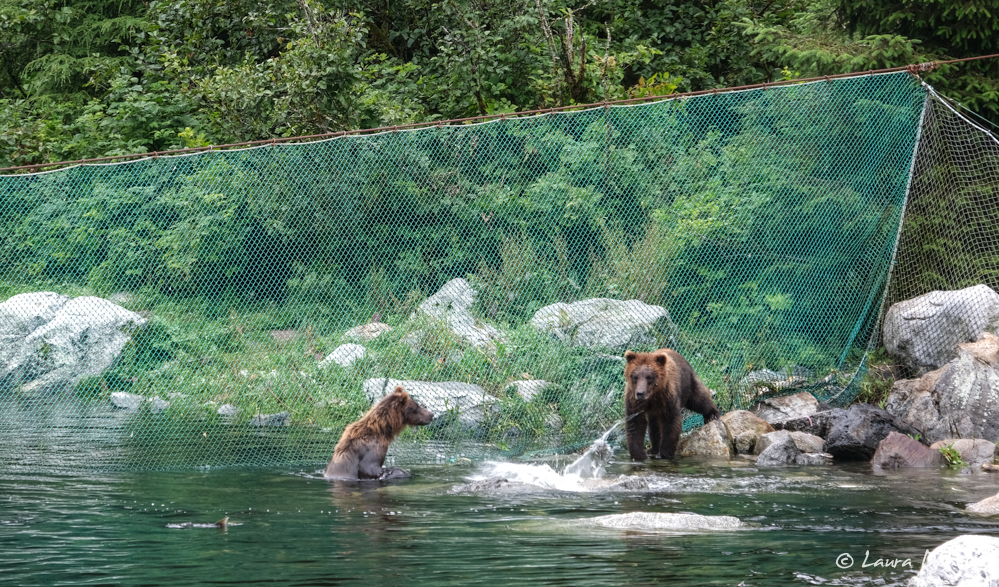 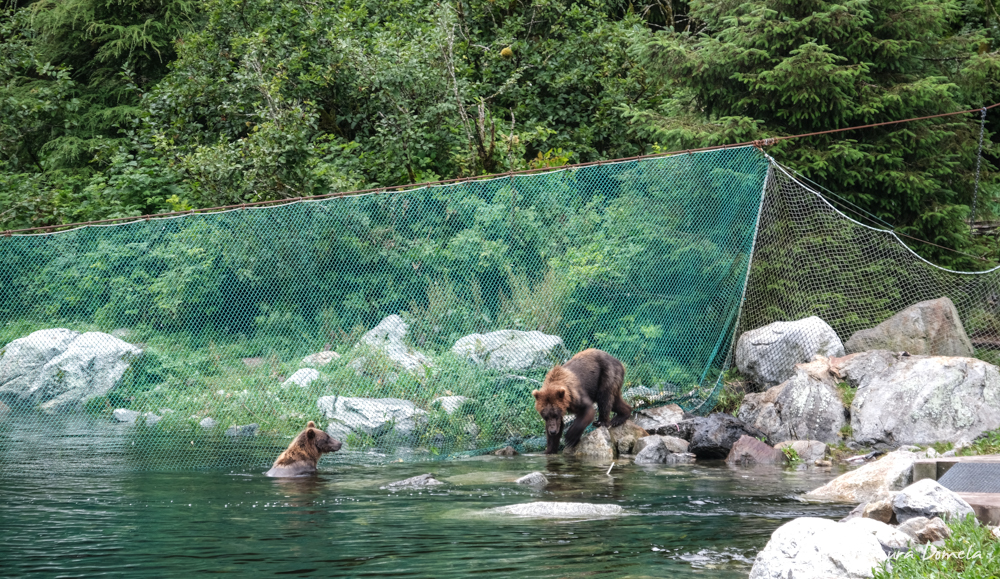 It was pretty cool watching these guys so close. When we first arrived on the dinghy dock and were headed up the ramp, we spotted a bear making its way from the rocky shore to our left, under the dock, and around to the right where the fish were, so we waited for it to pass and then cautiously continued on around. We’ve not visited Hidden Falls when there were THIS many bears around. At first we were the only people at the edge of the river watching them, which felt a little sketchy (though we all had bear spray, and clearly the bears were interested only in fish). Maybe ten minutes after we arrived, a larger group of maybe a dozen or more people on a hatchery tour emerged from a nearby building and came to watch the bears too, so there were more people than bears and those numbers felt a bit better!

The next day we headed over to Takatz Bay, where we ALSO had the anchorage to ourselves (which I’m not sure has ever happened!) We fished and cooked and visited and explored by dinghy and had a great time, and Kevin and Craig each caught a nice sized Coho!

Our next stop was Red Bluff Bay, which was as beautiful as usual. We met some nice folks on a Selene called Moonstruck (hi Greg and Marilyn!!), we explored by dinghy, saw a bear, and caught a bucket full of prawns!

Kevin’s brother is scheduled to fly out of Juneau (after a stop in Pybus Bay and Tracy Arm/Endicott Arm/Ford’s Terror, but the weather is looking a little sporty to the north, so we are looking at options now. We may head south instead!