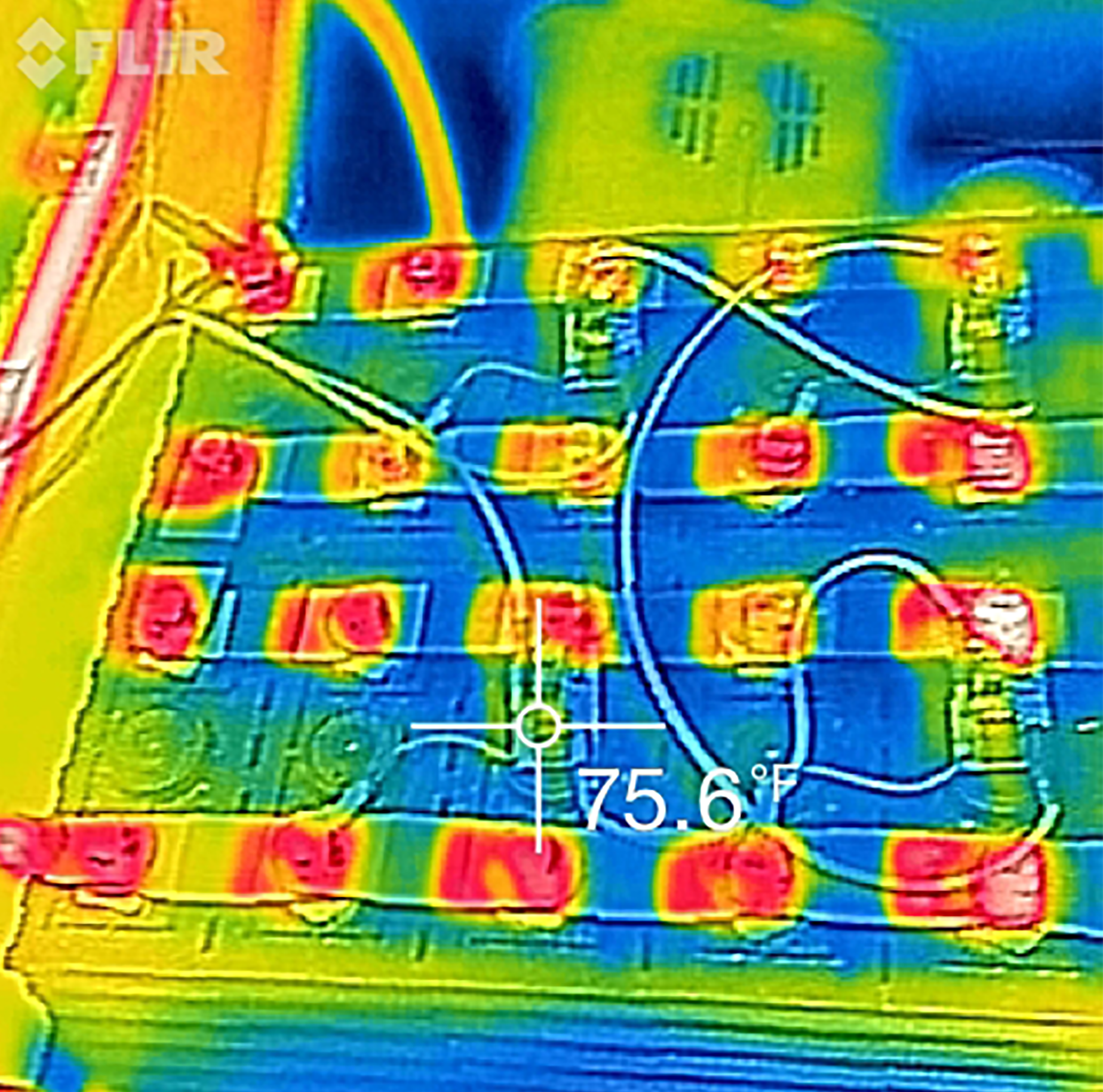 This winter, we posted on Riveted blog about how we upgraded Airship’s solar power system. The two new 260W panels, dual Blue Sky MPPT charge controllers, and BlueSky PNPro control panel are performing great. We have seen as much as 30A output from the solar system already, and are consistently getting over 100Ah per day contribution to our power from solar.

The second phase of the power upgrade for Airship was replacing the AGM house batteries with new 600 Ah lithium batteries from AM Solar in Springfield, OR. The batteries come with a battery management system that protects the batteries from over discharging or over charging (and several other possible hazards). They dropped into our system with a minimum amount of hassle and a simple re-programming of our Magnum inverter/charter and our Blue Sky solar charge controllers. 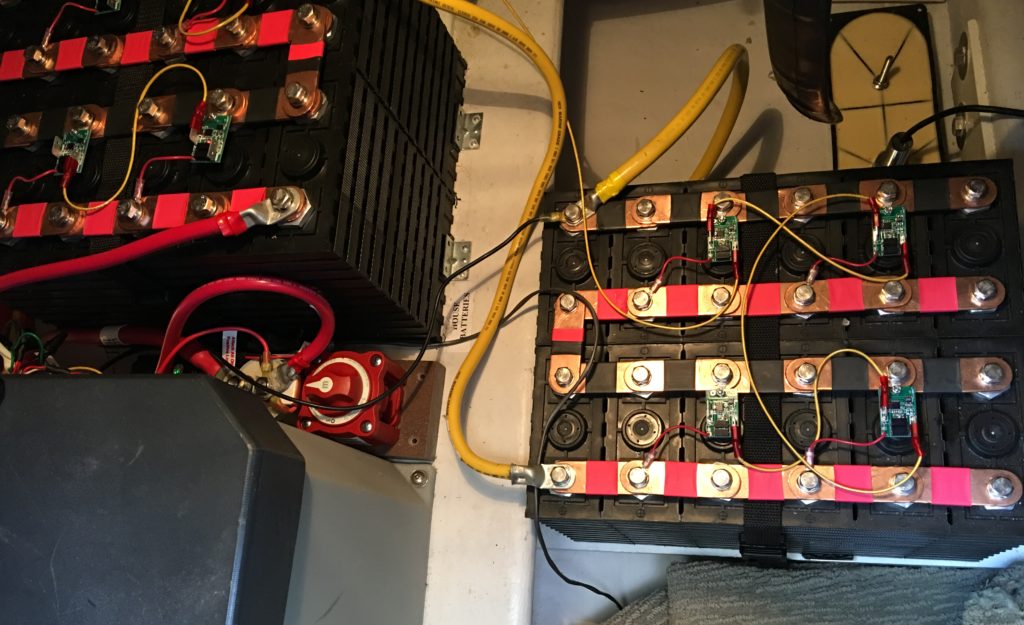 Before we dive into the science and the math on the lithium battery upgrade, let’s just cut to the punchline. These batteries are spectacular! Using them in conjunction with the solar and our (very good) 150A main engine alternator while underway, we just have power. No fussing around, balancing loads, turning this off before we turn that on. No worrying. No turning systems off at night. No running the generator every day. No juggling shore power cords at the marina. You might think you were at home connected to the power grid.

We left our home port 8 days ago (headed up the Inside Passage to SE Alaska), and we have not once connected to shore power or started the generator. We have never once turned off the inverter. We have had hot water continuously. We have washed dishes, taken showers, used the hair dryer, made espresso (too much, perhaps), microwaved stuff, kept the Torqeedo electric outboard batteries charged to power the dinghy, charged the drone batteries, used our laptops most of the day, listened to music, watched a little TV, and run the anchor alarm system all night. We have run a refrigerator and chest freezer continually. We have even used the hair dryer at the same time the water was heating. No problem. No generator. No shore power. Our batteries have been at 100% at some point every single day. They have never dropped as low as 40% (spoiler, Lithium batteries can be discharged below 20% without harm.) Most days the batteries never drop below 50%.

OK, now the details: Our old house array consisted of four (excellent) Lifeline 6V 220 Ah AGM golf cart batteries. Those batteries did a great job. Each pair of 6V batteries were connected in series to give us 12V, and then the two 12V pairs were connected in parallel. That gave us a total of 440Ah of 12V power. With AGM batteries, you should not discharge them more than 50% for longest life, so following that rule, we got about 220Ah usable 12V power stored in the batteries.

If you add that 220Ah usable to the 100Ah we collect each day from solar, that gave us about 320Ah per day of usable power without running the engine or generator or plugging into shore power.

Why would we need more than that?

Well, let’s look at the loads we have aboard Airship. Running all the time, we have the refrigerator and the deck top freezer. Together, those pull an average of about 7A. Multiply that by 24 hours and you get 168Ah per day just to keep the food cold. We have LED lighting throughout the boat, and that actually draws an almost negligible amount of current. We use propane for cooking, so there’s no electricity consumed there, and our heater is a Wallas diesel heater that consumes an amazingly-small 2.5A. But, if we’re in winter and running that guy all day long, it pulls another 60Ah out in a 24 hour period. (Also, in winter, our solar output is cut at least in half, so we lose another 50Ah there.

Add all that up for a winter day, and we’ve used up 278Ah of our 320Ah budget, and we haven’t accounted for any of the stuff that runs off the 120V inverter.  But, if you want to put anything into a normal household outlet, you have to run the inverter (which makes 120V AC power) The inverter itself uses some power just being “on”, even if nothing is plugged it. The cost of having the inverter on is about 2.5A, so if you leave it on 24 hours a day, that’s another 60Ah. That brings our winter-day total to 338 – out of an available 320Ah. Uh oh.

And, we haven’t even accounted for any stuff like laptops, lights – computers, the radio/entertainment system, the coffee maker, the microwave, hair dryers, laptops, phone chargers… you get the picture. Anything you plug into a normal household outlet runs off the inverter.

Then, there is the biggie. HOT WATER.

If you’re from the RV world, you may be distressed to learn that boats don’t have propane water heaters. You may also notice above that the refrigerator/freezers don’t run on propane. If you’re gonna have hot water or cool your food, it’s probably electric. When the water heater kicks on, it pulls a whopping 1800W, which works out to about 15A AC or – 150A of 12V DC. Our hot water heater holds 6 gal, and it takes about 15 minutes to warm it back up when it kicks on. If it runs for even ONE HOUR per day, that’s another 150Ah. That would put us at 488Ah against our 320Ah budget on a winter day. We’d need the generator (or something) to toss in another 168Ah to keep our heads above water, and then, of course, another 320Ah to replace what we used and get us back to 100% to start the next day.

On a summer day, with more solar and less running of the heater, we have a bit more headroom.

What this worked out to in practice was this: Our water heater ran only when we had the generator or shore power. If we were at anchor, we awoke in the morning with no hot water. We also awoke with batteries near 50%, so it was time to run the generator. If we ran the generator 2 hours, we put back about 250Ah into the batteries. That wouldn’t get them to 100%, but it would give us hot water and away from the “danger zone” of over-discharging the AGMs.

Often, in the evening, we’d have to run the generator another hour or two to put back what we’d used during the day and have enough to make it through the night.

With lithium batteries, you can just charge them right up to 100% at basically full speed.

Right now, with the new lithiums. we figure that if we cruise for about four hours each day (with the engine alternator recharging the batteries) we end up with the batteries at 100%. By the time we’re ready to start our cruise the next day, they’re somewhere in the 40%-65% range.

While we’re at it, let’s dispel a few myths that seem to have gotten around about lithium batteries:

First, “will they catch fire?” – no. Lithium Polymer batteries have been known to catch fire (Boeing jets, hover boards, etc.) And, when those catch fire, they can burn REALLY hot. Not good, but also VERY rare.

But, these are Lithium Iron Phosphate batteries. Not flammable. Whole different ballgame. No catching fire.

“How do you cool them?” The idea must have come from the “fire” stories that lithium batteries run hot. They do not. They actually have a lower internal resistance than AGM (or other lead-acid) batteries. That means they run COOLER than your regular batteries. Also, it means they can deliver more current without the voltage sagging, and they can accept charge more efficiently (which makes your solar count for more). Don’t believe it? Here is a FLIR thermal imaging photo of our batteries operating – with a 200A load! 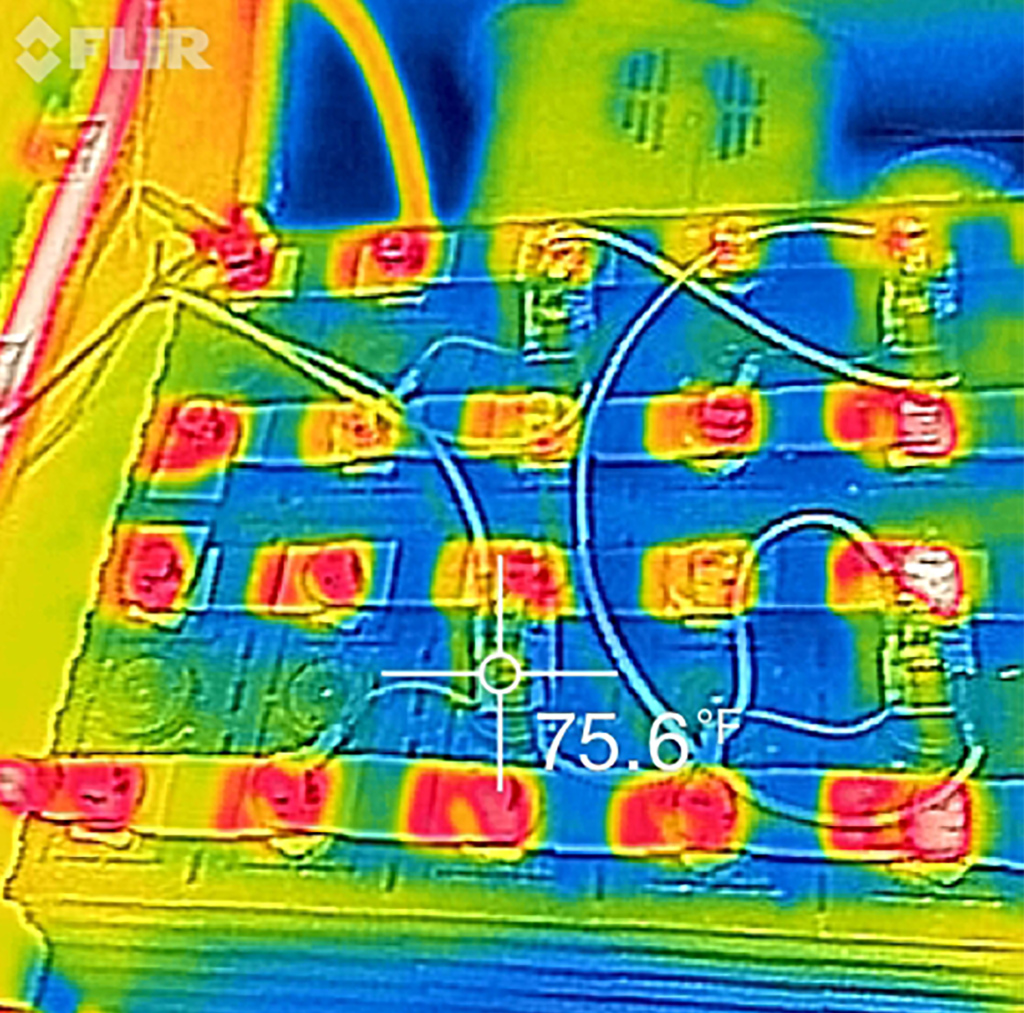 “Aren’t they super expensive?” YES! They are very expensive. An upgrade like we did could easily cost $6,000 or more. BUT – they have an estimated lifespan that is 10x lead acid batteries. Our old AGM batteries cost about $400 each, so the whole set was around $1,600 list. To get the same usable capacity, we would have to have even more AGMs for an apples-to-apples comparison. If we assume our 600Ah lithiums deliver 80% usable power – that’s 480Ah. To get that with AGMs, you’d need 960Ah total capacity. That’s about double what we had, so you’d be looking at $3,200 for AGMs with comparable usable capacity. Multiply that by 10 to factor in the usable lifetime, and $6,000 worth of lithiums equals $32,000 worth of AGMs! Not so super expensive after all.

Finally, the lithiums weigh approximately 1/3 of the equivalent capacity of AGMs. In fact, we had to re-arrange the load on our boat because the lighter batteries made the boat list slightly to one side. Good problem to have!

We’ll report more when we’ve got more use on these, but so far we are super impressed.

2 thoughts on “Lithium Batteries on Airship – For the Win!”