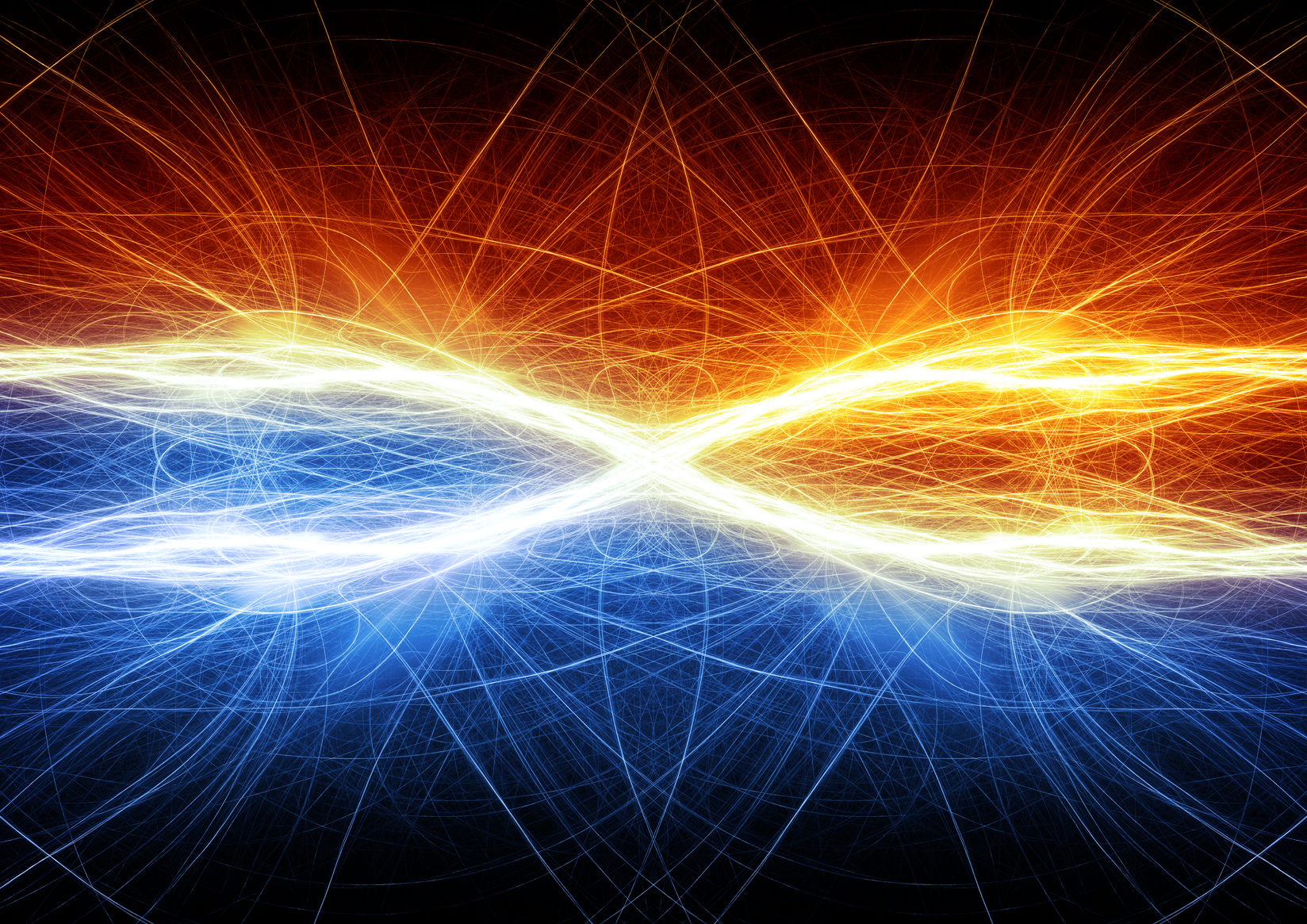 Before our 5-month trip up the Inside Passage to Alaska aboard Airship, we did some major upgrades to Airship’s electrical power system. Now, after five solid months on the boat – mostly away from marinas, here is a summary of how the system performed, what we learned, and what our “ideal” power system might look like.

SPOILER: It was AWESOME! We could not be more thrilled with how robust, reliable, and easy to use the new power system proved in five solid months of harsh use.

BONUS SPOILER: For the first 3 weeks of our trip – from Anacortes, Washington up the Inside Passage to Ketchikan, Alaska, we never once ran the generator or hooked up to shore power. We never once turned off the inverter or the water heater. We basically had all the power we wanted or needed without having to flip a switch, read a meter, or think about “how much power do we have?”

BONUS SPOILER DISCLAIMER: We said we didn’t “have” to read a meter or worry – but we did anyway. We’re data nerds. We looked at the meter about 15 times per day “Wooooo – look at that! We’ve still got 94% of battery left. Whoa! check it out – our solar array is pumping out 30 amps! Wow, we haven’t had to start the genset or hook up the power cord for WEEKS!”

OK, here is Airship’s system and the philosophy behind it.

We think of the power system in terms of power sources, power drains, and power storage. Power sources include the main engine alternator, the generator, solar panels, and shore power. Power drains are things like the refrigerator, freezer, water heater, lighting, laptops, and misc appliances. Power storage is the house batteries.

Power Drains: (note, we are only counting “house” power – not including the navigation instruments, engine electronics, bow and stern thrusters, windlass, etc.).

Our philosophy is to set things up so the batteries can power anything and everything for one full day.

When we are traveling, we often spend only a single night at an anchorage or marina, then cruise several hours the next day to another destination. In that situation, we’d like things to be as easy as possible – no hooking up to shore power, no running the generator, just nice silent trouble-free battery power. And, we don’t want to be constantly worrying about how much power we’re using, turning things (like the water heater) on and off all the time, etc. That means we need a big enough usable house battery capacity to handle one day of our normal use, with a little to spare. And, we need an inverter big enough to handle any AC loads we might have without running the generator or hooking up shore power.

We calculated our daily usage while we were cruising around the San Juan Islands in the winter and spring. It looks like we use up to 450Ah of 12V electric in a typical day – if we leave the inverter and electric water heater running 24/7. (It turns out that the water heater accounts for OVER HALF of our total power usage on Airship).

NOTE: Don’t be put off by the electrical terminology. “Ah” stands for amp-hours. If that’s too unfamiliar, pretend that electricity comes in “gallons” and substitute that in your mind. “Airship uses 450 gallons of power per day.” Pretend that the battery is a fuel tank, and it holds a certain number of gallons. Pretend that the power sources pump a certain number of gallons per day into the battery. You’ll be just fine.

For that reason, we decided that a USABLE house battery capacity of 600Ah would be perfect for Airship. Note the word USABLE there. For normal lead-acid or AGM batteries, you should not regularly discharge more than 50%, so a 600Ah usable capacity would require 1200Ah of total battery capacity. For lithium batteries, however, they are typically rated for 100% of their listed capacity (some companies rate for 80%), so a 600Ah battery capacity gives 600Ah (or 480Ah if 80% rated) of USABLE capacity.

So, with a 600Ah usable battery capacity on Airship, we should be able to run everything just fine for a full day without adding any power to the system and without doing anything particular to conserve.

Now, once we’ve done that, how do we refill the battery for the next day?

Time to talk about our Power Sources:

First, there is the solar. Our two 260W solar panels don’t ever put out even close to 260W each. Solar panels must be rated by a marketing guy who stands in the Sahara Desert pointing the panel directly at the sun exactly at noon. No solar panel in the real world ever comes close to its rated output. Second, even in the Land of the Midnight Sun, it’s not always sunny. You only get a few hours of good, solid sunlight per day, and most of those are at a steep angle, not with your panel pointed right at the sun. Clouds, rain, and fog all cut down significantly on your power output.

Finally, for boats and RVs in particular, there is a HUGE issue with solar that most people are not aware of – PARTIAL SHADE/SHADOW. In a normal solar panel, if you cast a shadow on JUST ONE of the little square cells (many panels have 50-60 of these little squares) – you have just cut the output by as much as 90%! Yep, you read that right. Casting a shadow on something like 5% of the panel almost completely shuts the panel down. And, on a boat, there is usually not a place you can put a panel where it won’t often be shaded by some part of the mast, antennas, or some other rooftop protrusion. Add to that the boat swinging at anchor, and you realize you just have to live with the fact that your solar panels will often be severely under-performing. 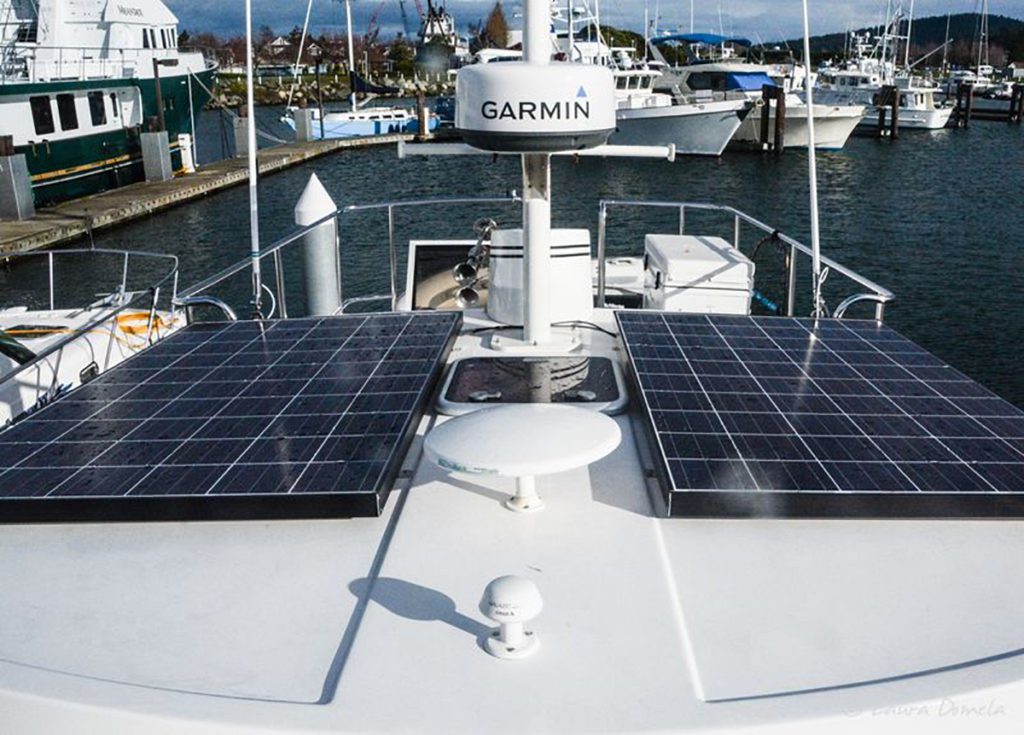 On Airship, we have a mast with a radar dome and several antennas. That means that at least one of our two solar panels will almost always have partial shade. If you have two panels on a single charge controller, that one panel will cut the output of BOTH panels significantly. So, we chose to have a separate charge controller (called an MPPT controller) for each panel. That way, when one panel is shaded and the other is in full sun, each one will have its output separately maximized by the charge controller. But – if you’re adding solar to a boat, RV, or whatever – REALLY pay attention to partial shade. Even a seemingly-small shadow is NOT OK!

We have now measured the output of Airship’s solar system over a wide range of conditions – from winter in the San Juans to mid-summer in SE Alaska. We have seen our total daily output range from 80Ah to almost 200Ah. Now, remember when we said our normal daily usage was around 450Ah? That means our solar provides something like 20-50% of our daily energy needs.

One thing we love about the lithium batteries is that they can be charged at full speed directly to full. Regular lead-acid or AGM batteries have to be charged more gently, slowing down the charge rate as they approach full. Our friend Steve says he thinks of it as pouring beer into a glass – when you get toward the top, you have to slow down to let the foam settle. So, with regular batteries, you have to run the generator much longer to charge them completely. You get to 80% or so pretty fast, but then the charge rate slows way down. Generators like to be run with heavy loads, though. It’s not good for your generator to run “easy” with light electrical loads. Lithium batteries, then, let us run our generator for a shorter time, and under a much better load than if we were trying to put the same charge into conventional batteries. It’s win-win.

Finally, when we’re at a marina for more than one night, we can plug into shore power. This year, our power system was so good, and we so seldom stayed more than one night at a marina, that we hardly ever needed to get out the shore power cord. It was wonderful! (This also means that we saved a few bucks in marina power charges. Power can be expensive in BC and AK since marinas often get their power from generators. Power alone can add $20/day to your moorage fee.)

One thing we did here was reduce the charge rate for shore power. Usually, when you plug into shore power, you have plenty of time, so there’s no need to rush getting your batteries back to 100%. And, if your 30A shore connection is using most of its capacity to recharge your batteries, you can easily trip the breaker if you try to run “other stuff” at the same time. So, we tell the charger to go slowly on shore power, and save some of that capacity for other things – like making coffee.

The one thing we’d maybe upgrade on our system at this point is to change our Inverter/Charger to one of the new “Hybrid” models. These new units have the ability to sense when you’re using more than the available shore power, and actually dip into the battery reserves to boost the output. It can be almost like having 50A power available, even though you’re plugged into only 30A. Then, when you’re using less power, the Inverter/Charger goes back to recharging your house batteries. It would be a nice upgrade.

Overall, we are thrilled with the major electrical upgrades we did to Airship this year. As we said, probably the only additional thing we’d change would be a swap for a “Hybrid” style inverter. If you’re on a larger boat with 240V AC power and/or 24V DC power – all these same principles apply, you just need bigger (and more expensive) versions of the same equipment.

2 thoughts on “Power Made Easy”