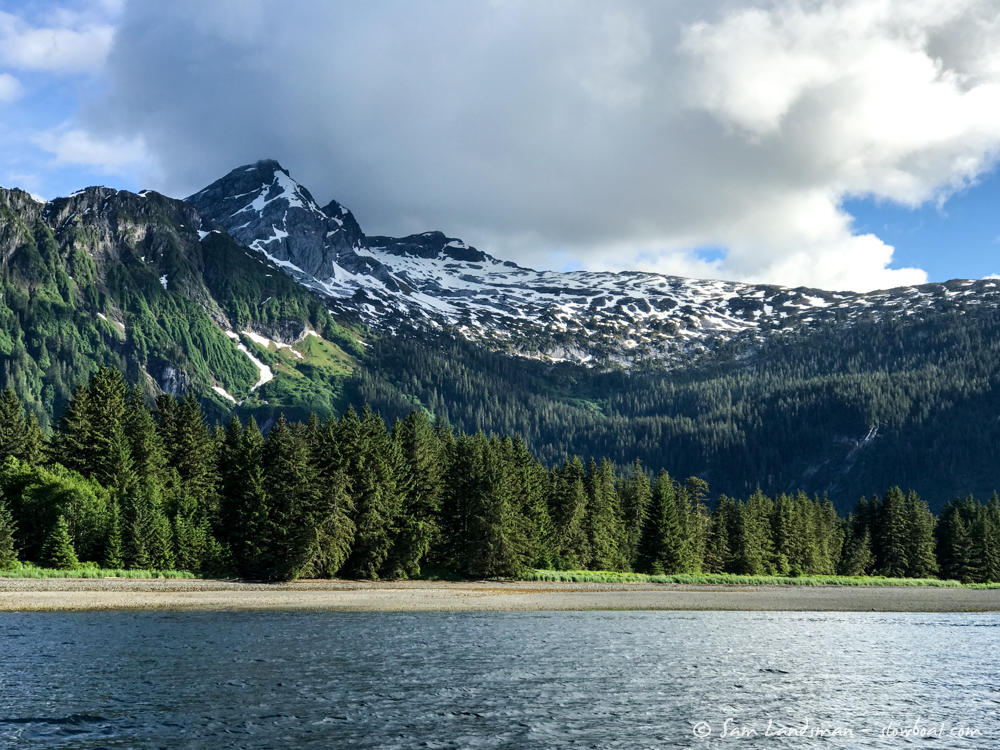 After a few days of chores and goodbyes in Sitka, I headed for Juneau. I would have loved to continue cruising with the group, but commitments intervened and I needed to make it Juneau in time for a flight back to Seattle.

I departed Sitka at 6:00 a.m. to make slack at Sergius Narrows. The earliest departure in weeks! After cruising in company for the last month, the quietness of the radio was a little unnerving. Was it still working? Where were the friends who’d be eager to assist in an emergency?

My destination for night one was Appleton Cove, about 50 nautical miles from Sitka. Owing to the early start, I arrived around noon and promptly napped. Rain fell for most of the afternoon, and I enjoyed a lazy day on board, dry and warm inside. After being on the go for a month, being lazy felt pretty good.

Somehow, on past trips, I’ve always missed Tenakee Springs, so I made it a point to visit this year. The trip from Appleton Cove to Tenakee Springs was smooth and easy (Chatham Strait cooperated), but I didn’t quite make it to town. Trap Bay, at the mouth of Tenakee Inlet, looked too good to pass up. A 3800 foot high mountain, with a prominent ridge connecting it to a second, smaller peak, forms a dramatic alpine bowl, reminiscent of Cannery Cove in Pybus Bay.

The charts don’t have a lot of detail, and Trap Bay isn’t listed in any of the guidebooks, but it looked so good. I nosed in for a closer look. The shoals seemed accurately charted and the depths were moderate. I dropped the hook in about 70 feet of water with plenty of swinging room. It’s not well protected, but winds were only forecast to blow 10 knots. 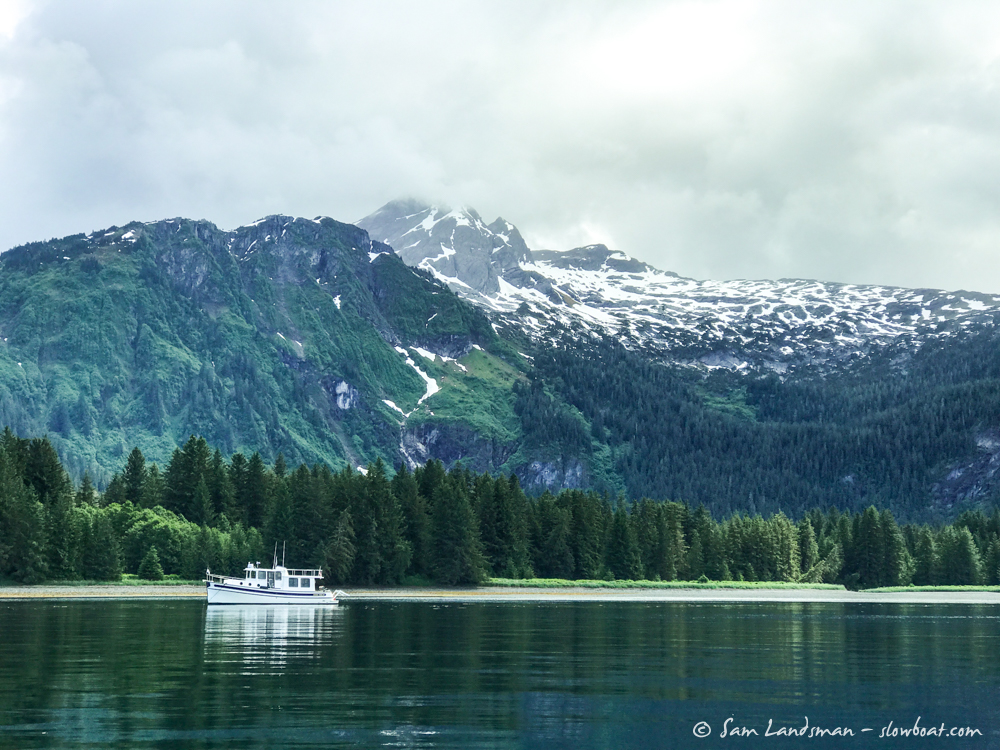 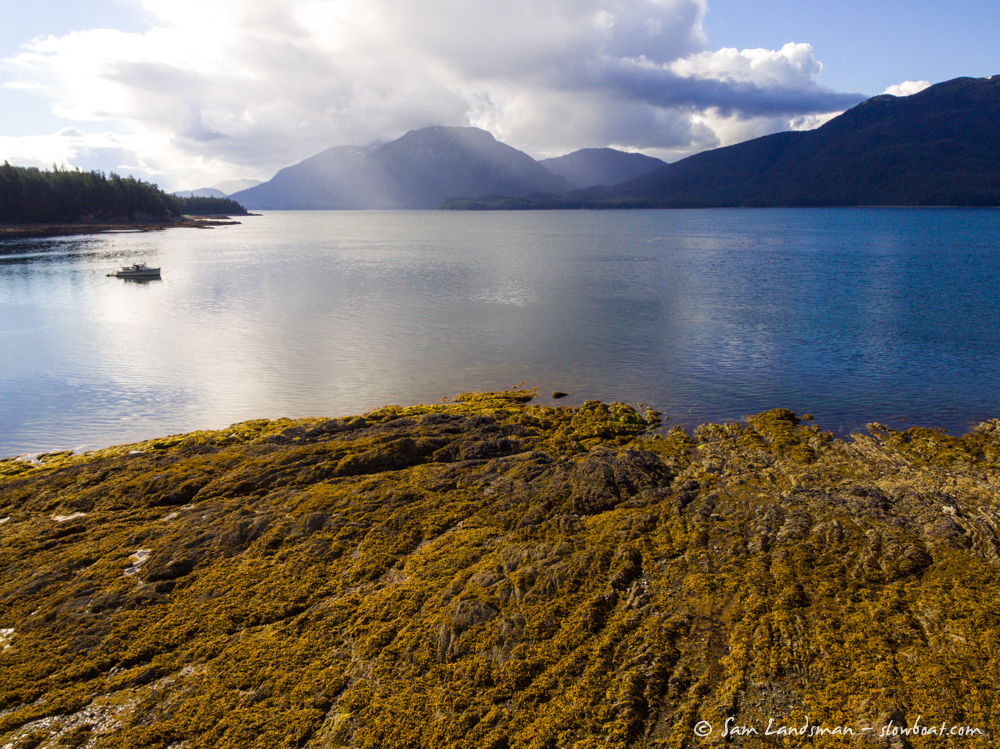 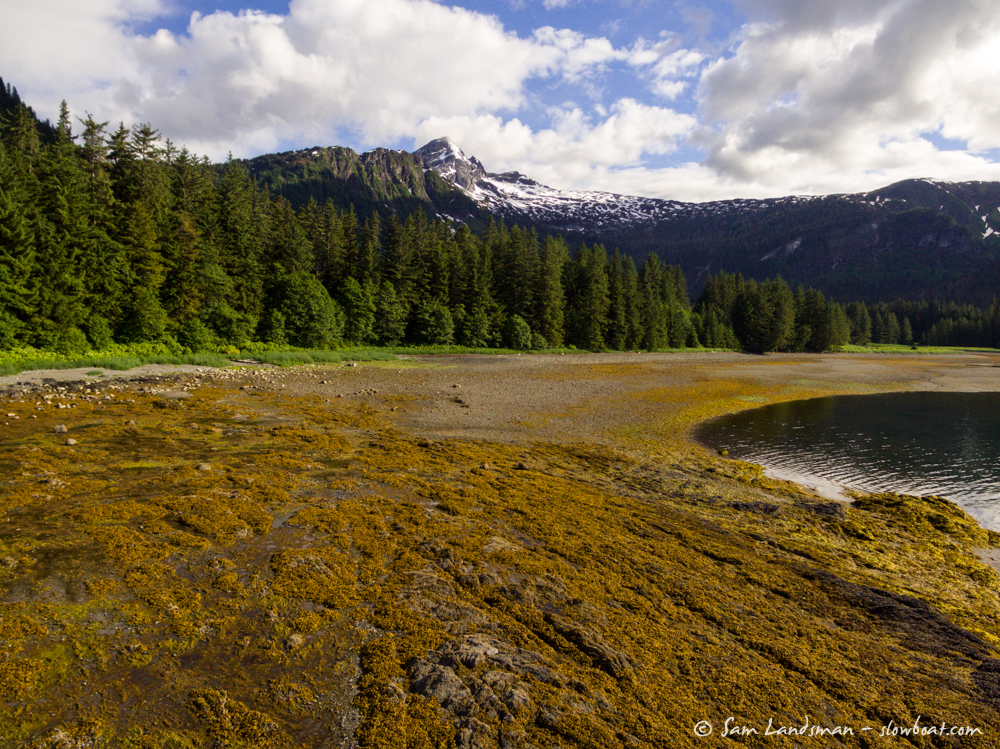 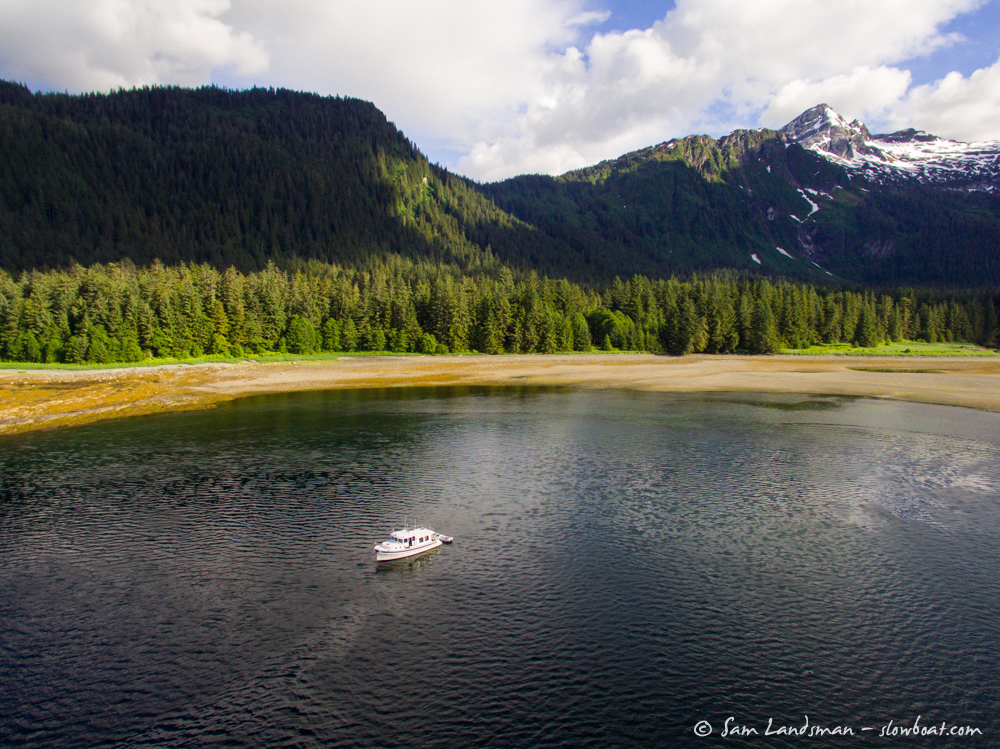 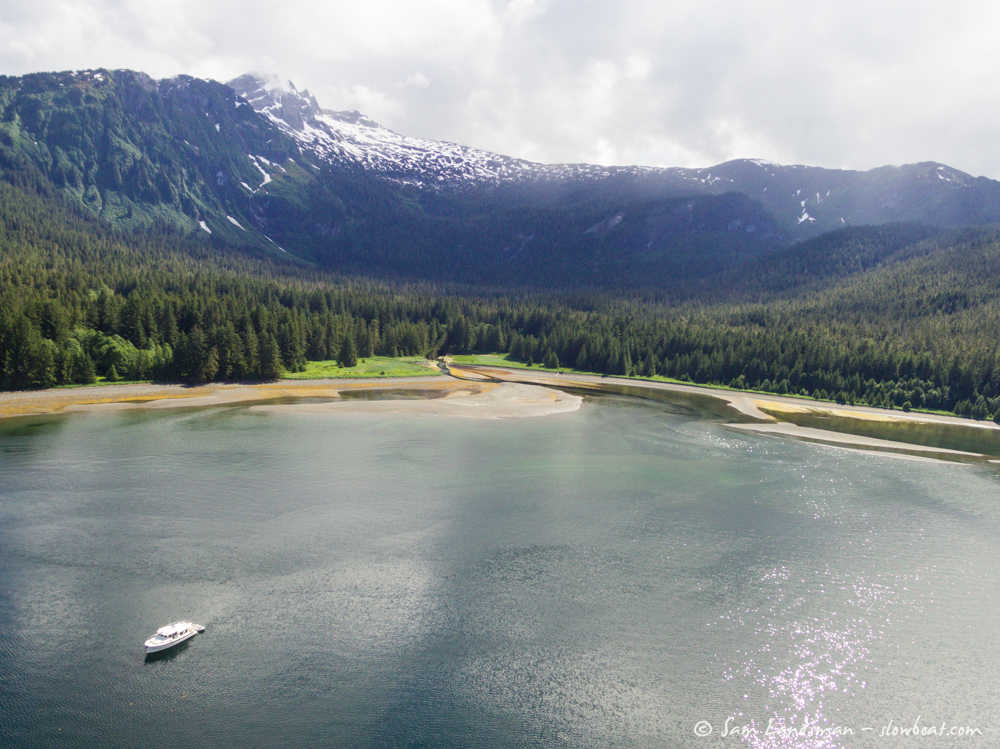 Sun mixed with occasional showers throughout the afternoon. The wind stayed calm. I launched the dinghy and headed for Tenakee Springs, six miles up inlet.

Tenakee Springs (pop. 130) was delightful! A single dirt road runs the length of the village. The store is remarkably well stocked and the bakery had delicious cinnamon rolls and empanadas. Some locals are in the process of opening a small museum, and even though it’s not technically open until July 2nd, they let me in for a quick look.

The bathhouse, which was built in 1939, is the center of town. I had low expectations—it’s a concrete building, genders have assigned hours, and clothes are not permitted. But it turned out to be a highlight. I had the place to myself, and it’s way more than a drab concrete building. Above the bath is an atrium with plants growing. Below the concrete is natural rock, with a huge crack that looks like the abyss. All the concrete has a patina from decades of mineral-rich water flowing over.

On the way back to the boat I spotted a small group of Dall’s Porpoises ahead. As I approached, I throttled back to just keep the dinghy on plane, hoping they would come over and play. It worked! These must be the most happy-go-lucky animals on the planet, and they swooped and splashed around the dinghy for several minutes. I managed to get some video with my phone without dropping the phone or myself overboard.

The next day dawned clear, sunny, and calm. I headed for Funter Bay. Unfortunately I’d come down with a nasty cold, and as soon as I arrived in Funter I fell asleep. By the time I woke up, clouds had moved in. So much for enjoying the sun.

Feeling lousy, and within a day of Juneau, I decided to stay another night in Funter. The day off was restful and I felt the cold slipping away. About 5:00 p.m., I woke from a nap, walked up the stairs to the pilothouse, and glanced out the window towards a group of humpbacks bubble net feeding. No way, I thought, as I rubbed the sleep out of my eyes. Could they really be here, 200 yards from my anchored boat? I watched the water carefully, and sure enough, they were. 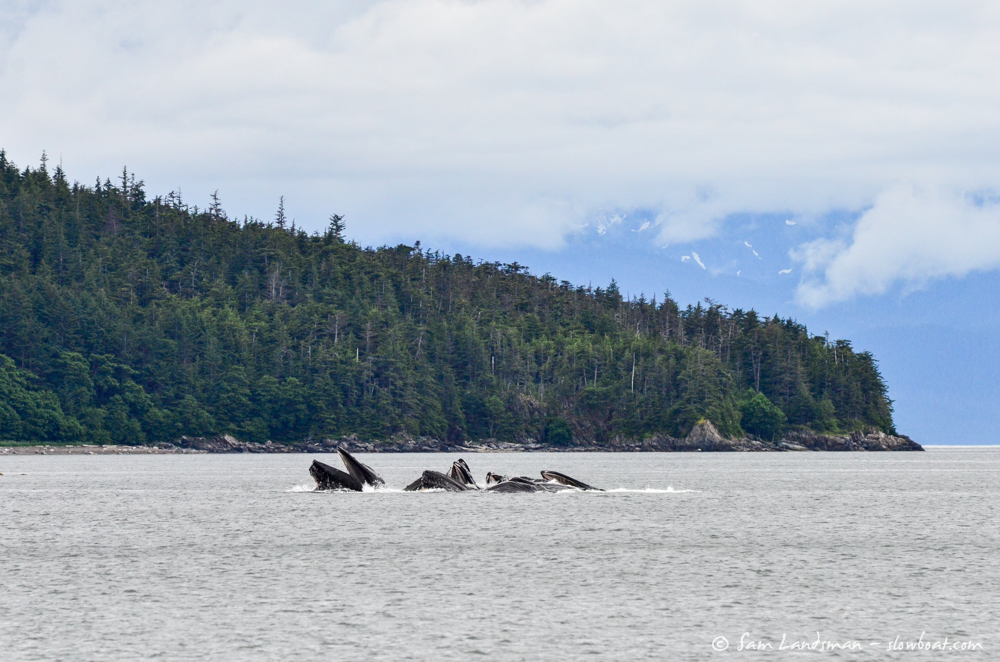 Bubble net feeding is a remarkable phenomenon. Humpbacks only feed during summer, when they’re in cold, nutrient rich water. The other half of the year, when they migrate to Mexico and Hawaii and the like, they focus on breeding. Imagine the caloric intake needed to sustain an 80,000-pound animal for six months! In order to store enough food for the winter, humpbacks feed for up to 22 hours per day during summer. And in order to more efficiently feed, some groups have learned  (yep, it’s not instinctual) to feed cooperatively. It works like this: each whale dives and ends up in a formation of sorts, something approximating a circle. Each whale exhales underwater, which collectively forms a “net” of bubbles, trapping fish in the column of water above them. With the fish stuck in the column, the whales simultaneously ascend to the surface, mouths open, scooping up food.

Still ahead of schedule (no weather or mechanical issues!), I made a short hop from Funter Bay to Admiralty Cove the following day. Just outside Funter, the whales were still in a feeding frenzy. I made my way north slowly, pacing the whales, watching them breach and bubble net feed for over an hour. Awesome! 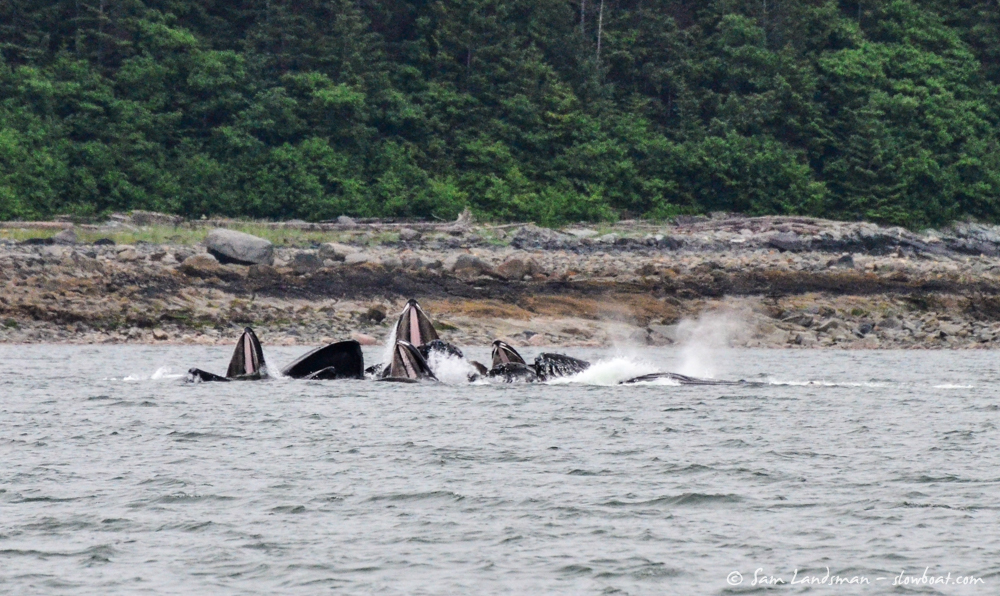 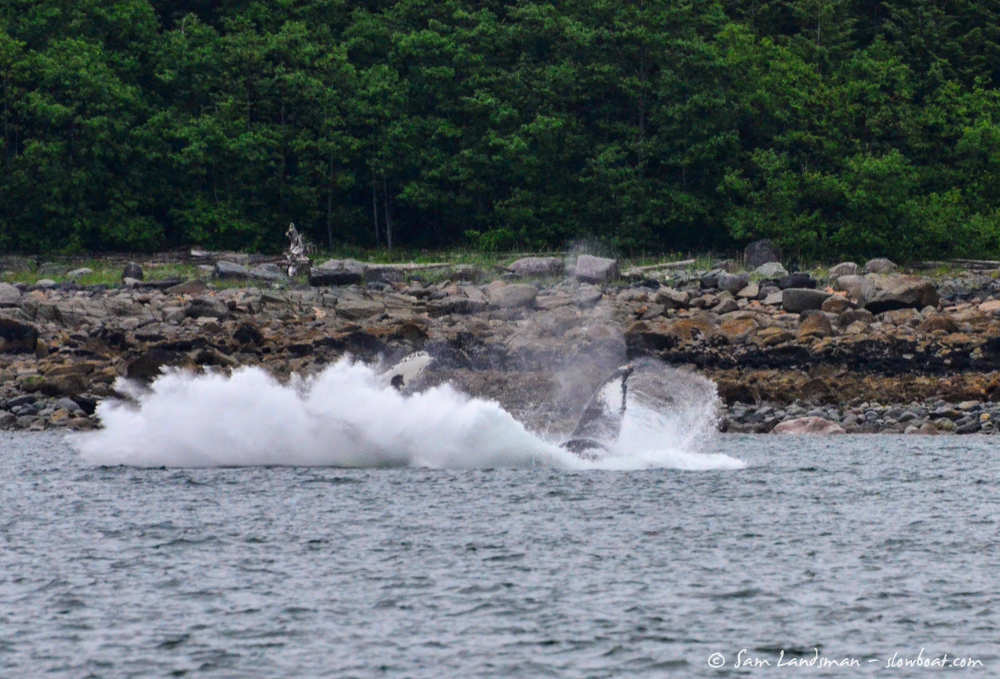 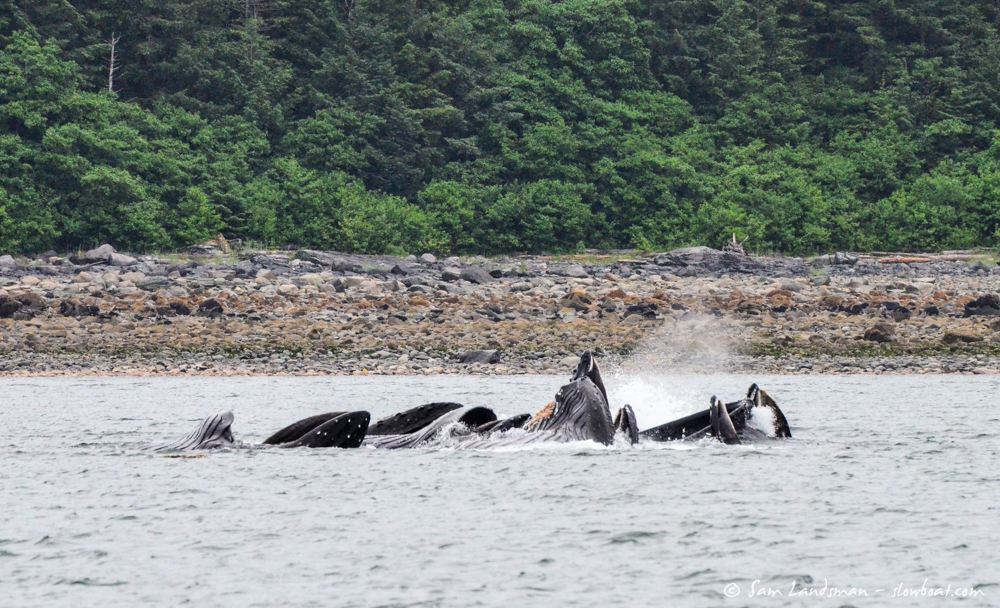 After a quick overnight at Admiralty Cove, I headed for Juneau. Chores, chores, and more chores! Next: Tracy Arm and Ford’s Terror. 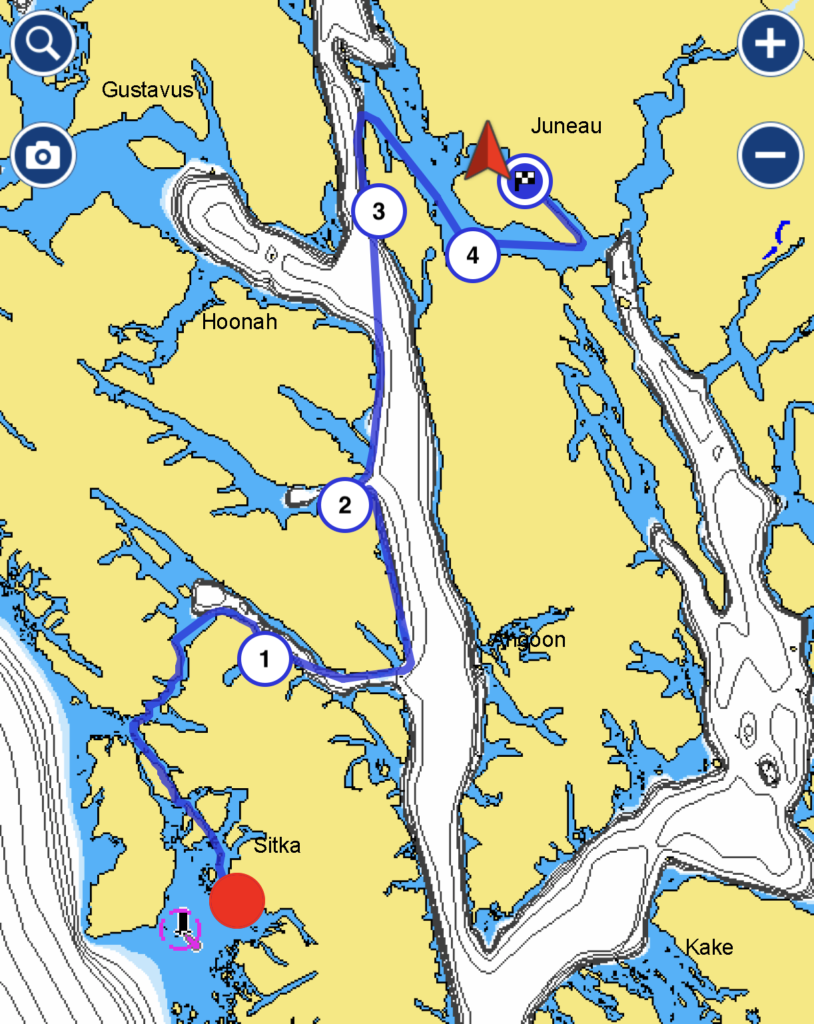