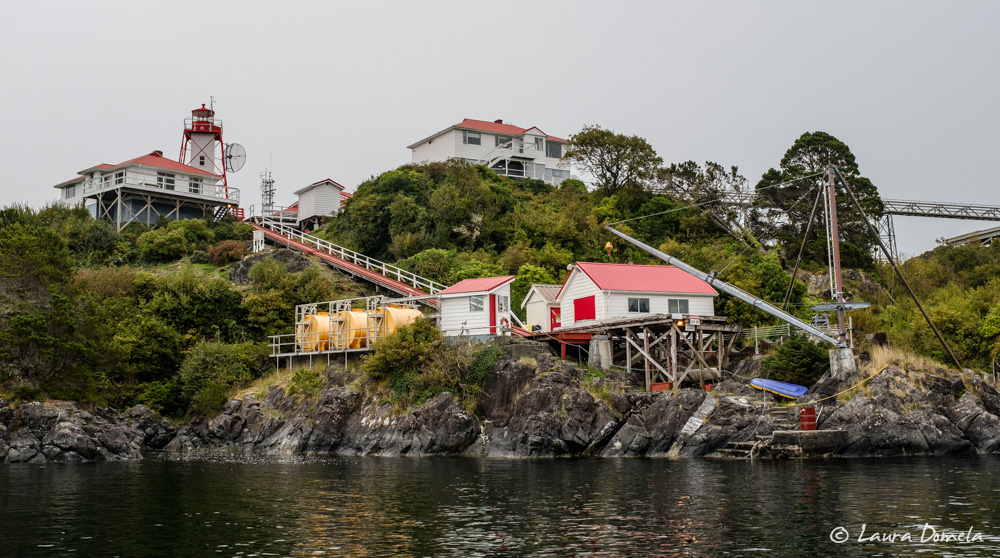 From Nuchatliz we took the inside route through Esperanza Inlet, Hecate Channel, Tahsis Narrows, and Cook Channel to Friendly Cove (“Yuquot” in the native language, which reportedly translates to “wind comes from all directions,” which we’ll get to later.)

Overnight, Environment Canada changed the forecast from light winds to 15 knot south winds. Although conditions on the outside didn’t sound terrible (nor did they sound great), adding three miles to our cruise to be in protected waters sounded pretty good. Most of the day was perfectly calm,  but as we headed south in Cook Channel towards the mouth of Nootka Sound the wind strengthened dramatically, gusting to 30 knots from the south. Sport fisherman who were offshore groaned on the radio about the lumpy conditions. (Scooter was definitely not happy.) We were glad we stayed off the ocean.

We anchored inside Friendly Cove in about 25 feet of water with good protection from the brisk southerly inflow wind.

Only a few people live here — The Williams family of the Mowachaht band, and two lightkeepers — but Yuquot was once the summer home of Chief Maquinna and the Mowachaht/Muchalaht people, housing approximately 1,500 natives in 20 traditional wooden longhouses. 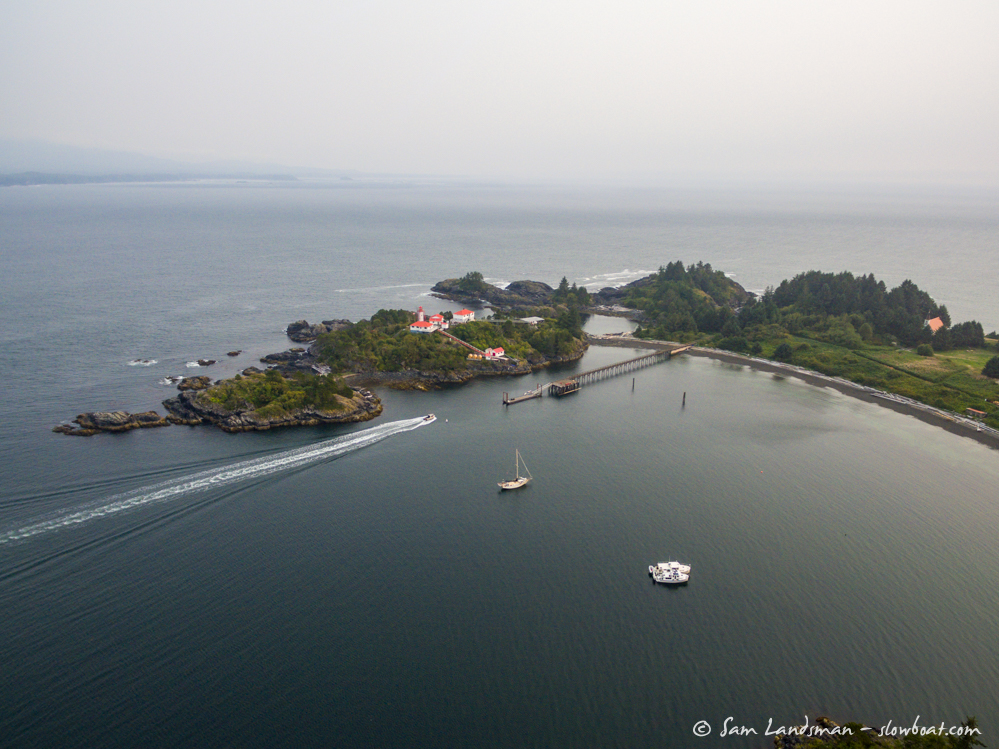 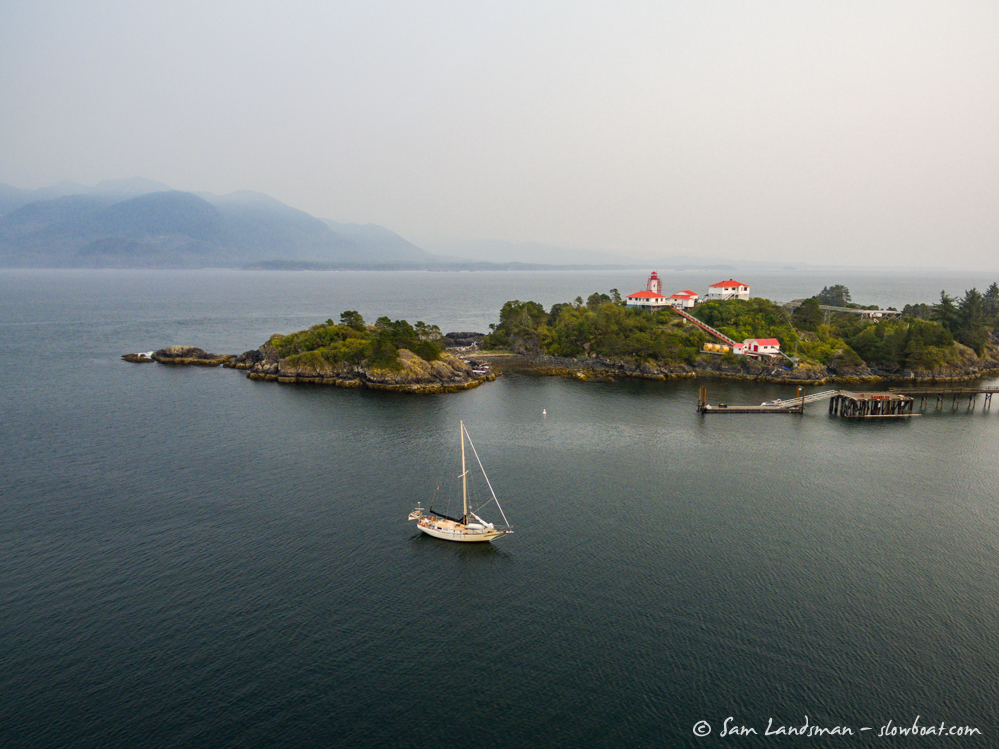 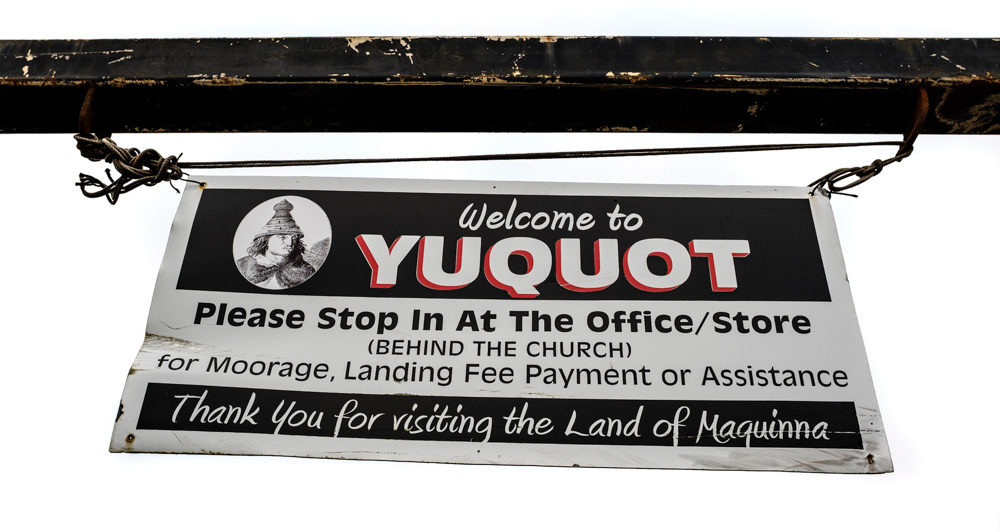 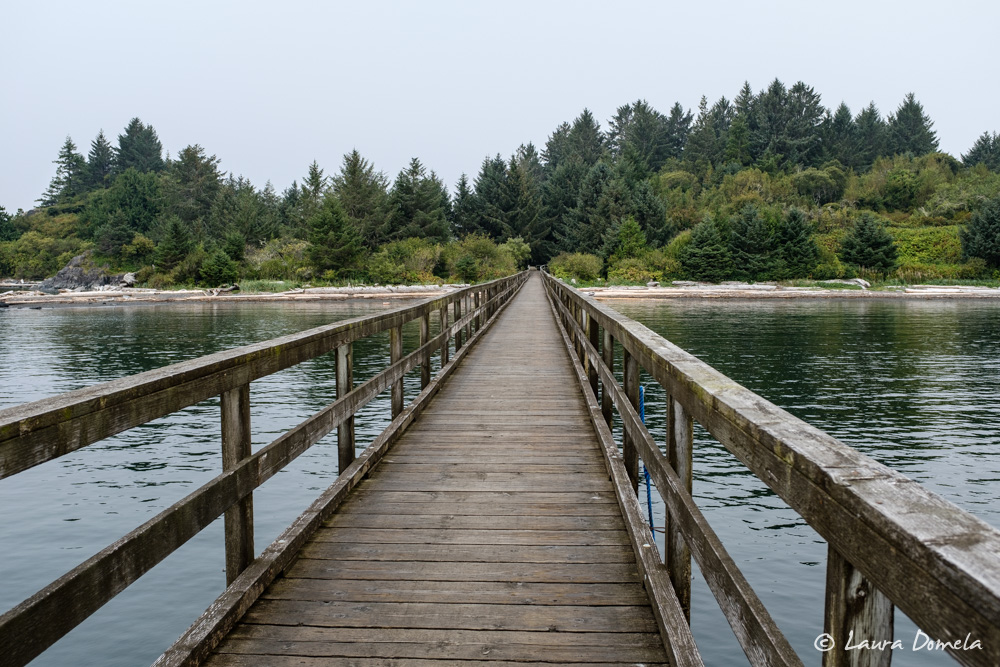 Once ashore, we took the trail over to the old Catholic church. 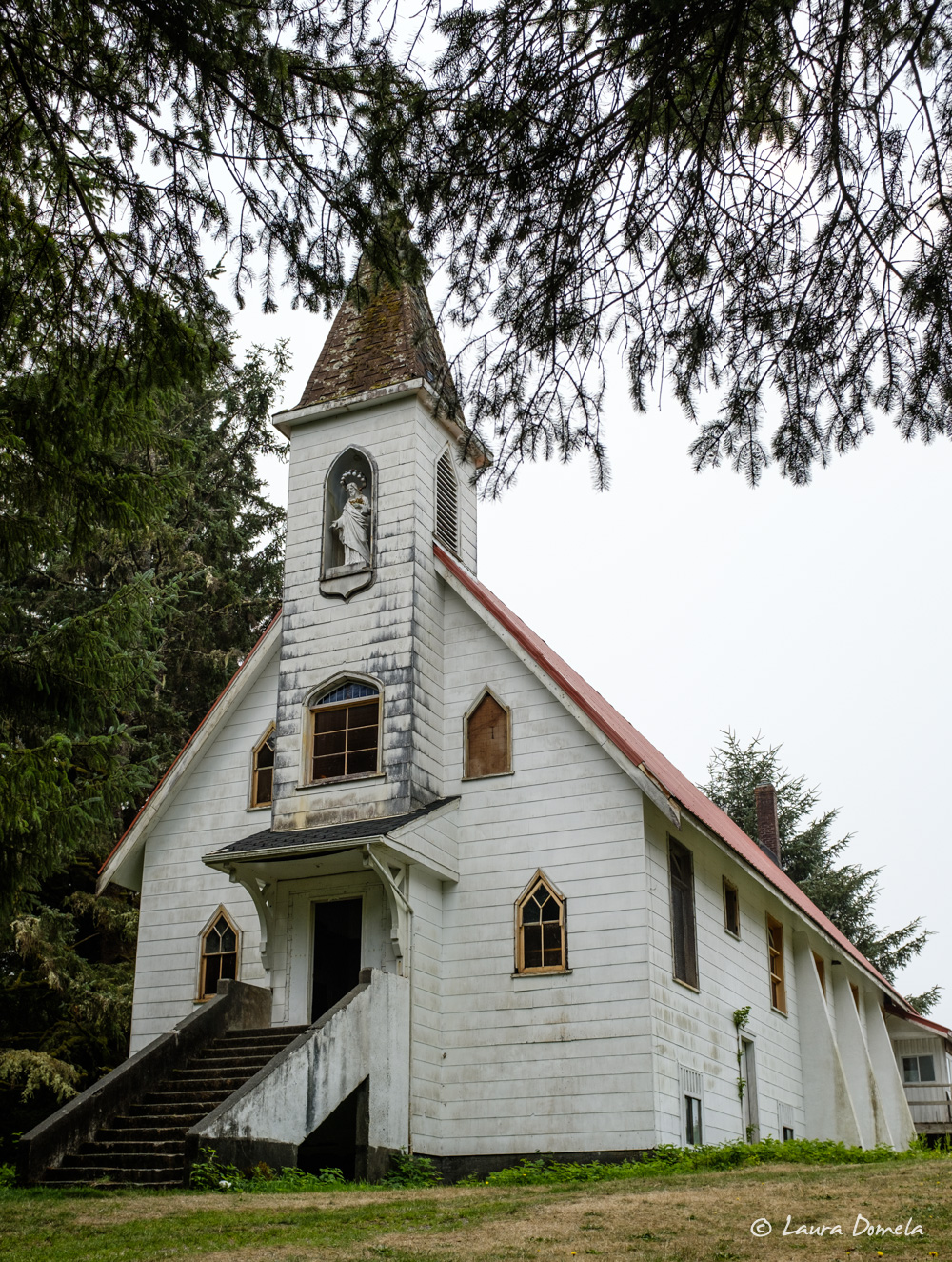 The church is filled with native carvings and totems, as well as a few non-Native religious items. 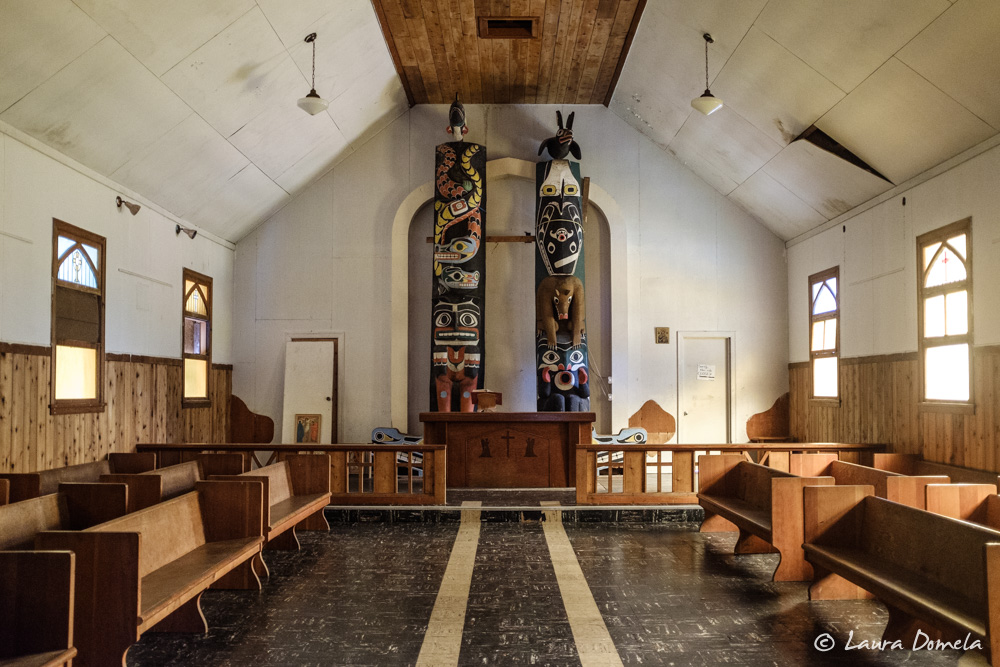 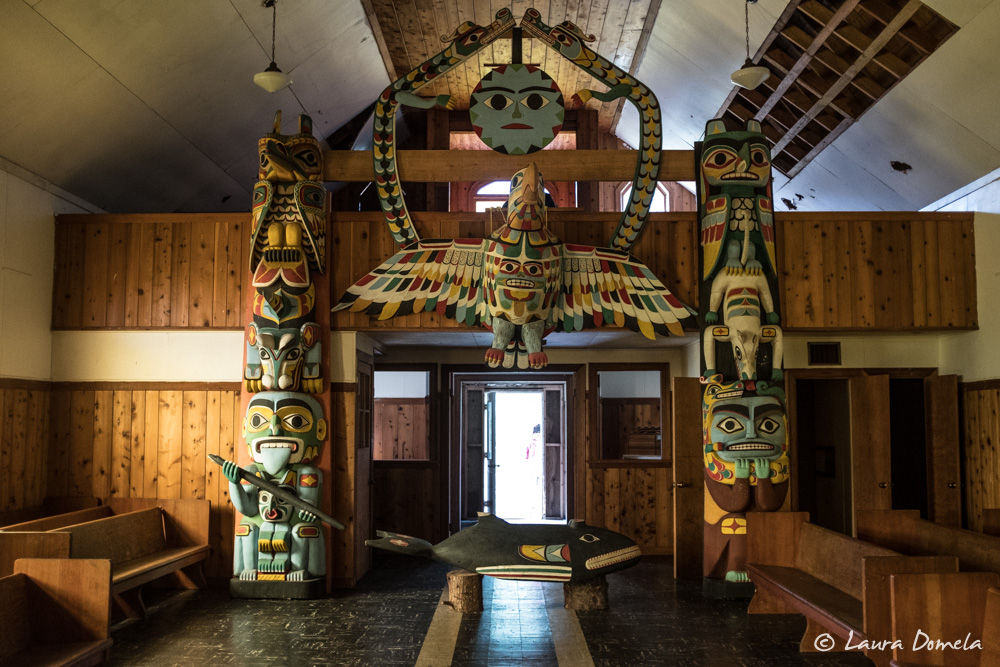 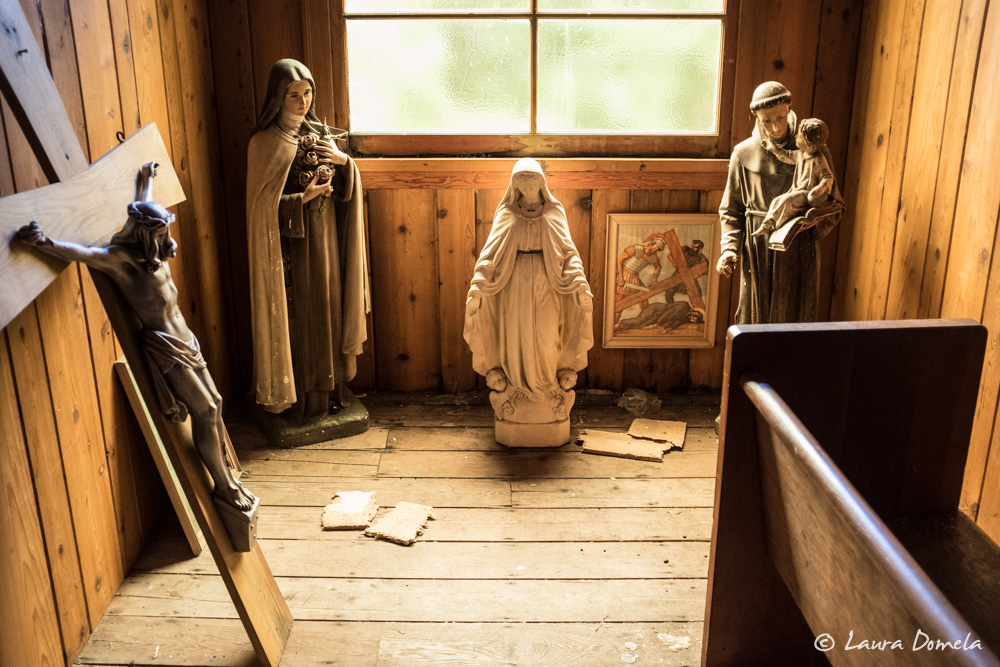 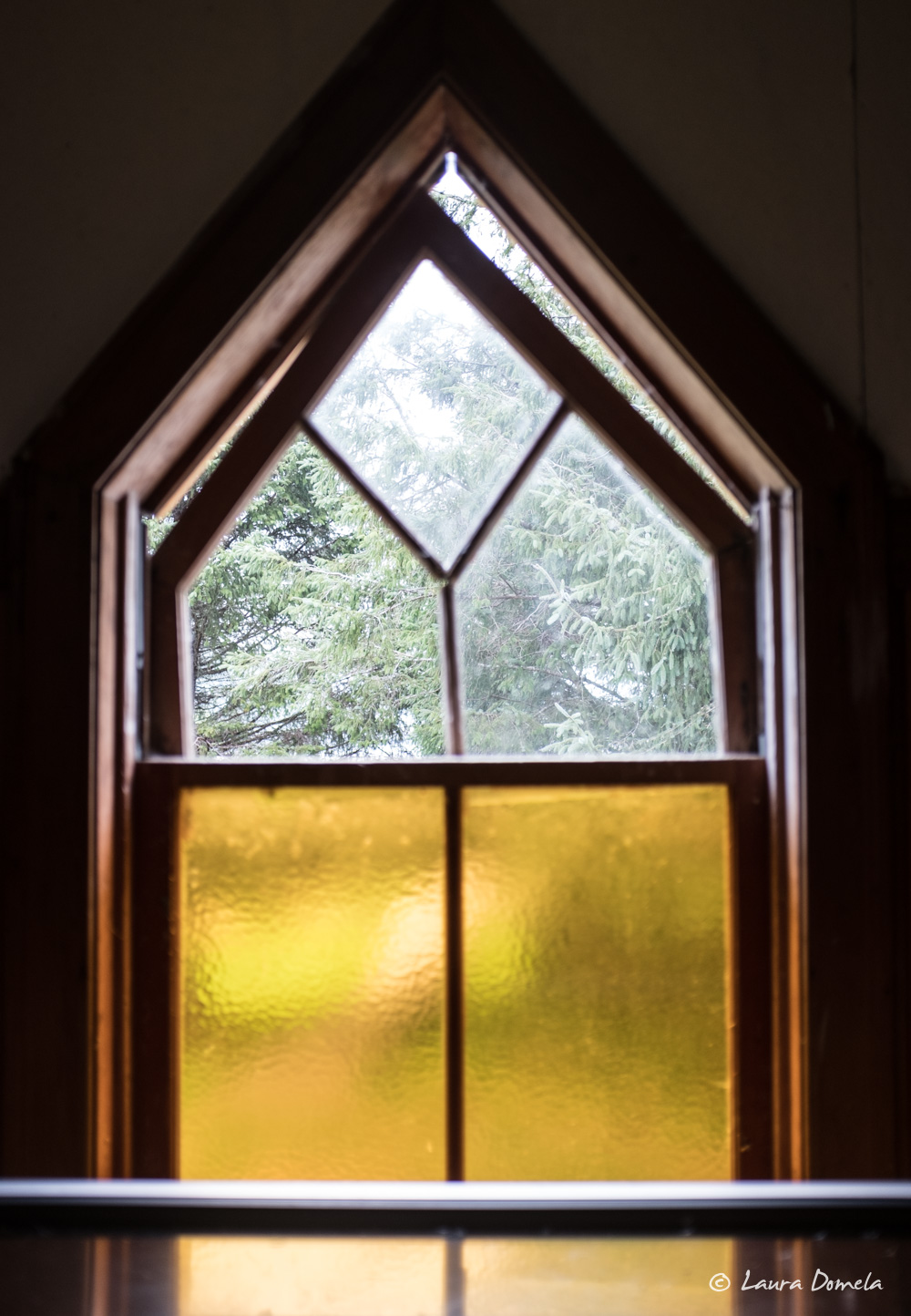 Friendly Cove is notably historic. In the late 1700s, Spain, Britain, Russia, and the United States were all competing for control of the west coast of North America, including Vancouver Island. By 1789, Spain claimed sovereignty over Nootka Sound, constructing the settlement of Santa Cruz de Nuca and Fort San Miguel in Yuquot. Throughout the summer of 1789, Spanish troops from Fort San Miguel seized non-Spanish ships and crews who arrived in Nootka Sound. Eventually tensions over these actions escalated into the Nootka Crisis and war between Spain and Britain was a serious threat.

Three Nootka Conventions, negotiated between 1792 and 1794, resolved the crisis. Friendly Cove/Yuquot is where Captains Vancouver and Bodega y Quadra met in 1792 to hash out some of the details. The Convention for Mutual Abandonment, signed in 1794, settled the issue for good. Both countries agreed that neither country would construct permanent settlements in Nootka Sound, both countries could use Nootka Sound as a port and for trading, and they would work together to ensure no other country claimed sovereignty of Nootka Sound.

Inside the church, there are two large leaded glass windows that were gifted from the government of Spain in 1957. The windows depict the ceremonial transfer of authority that accompanied the signing of the final Nootka Convention. 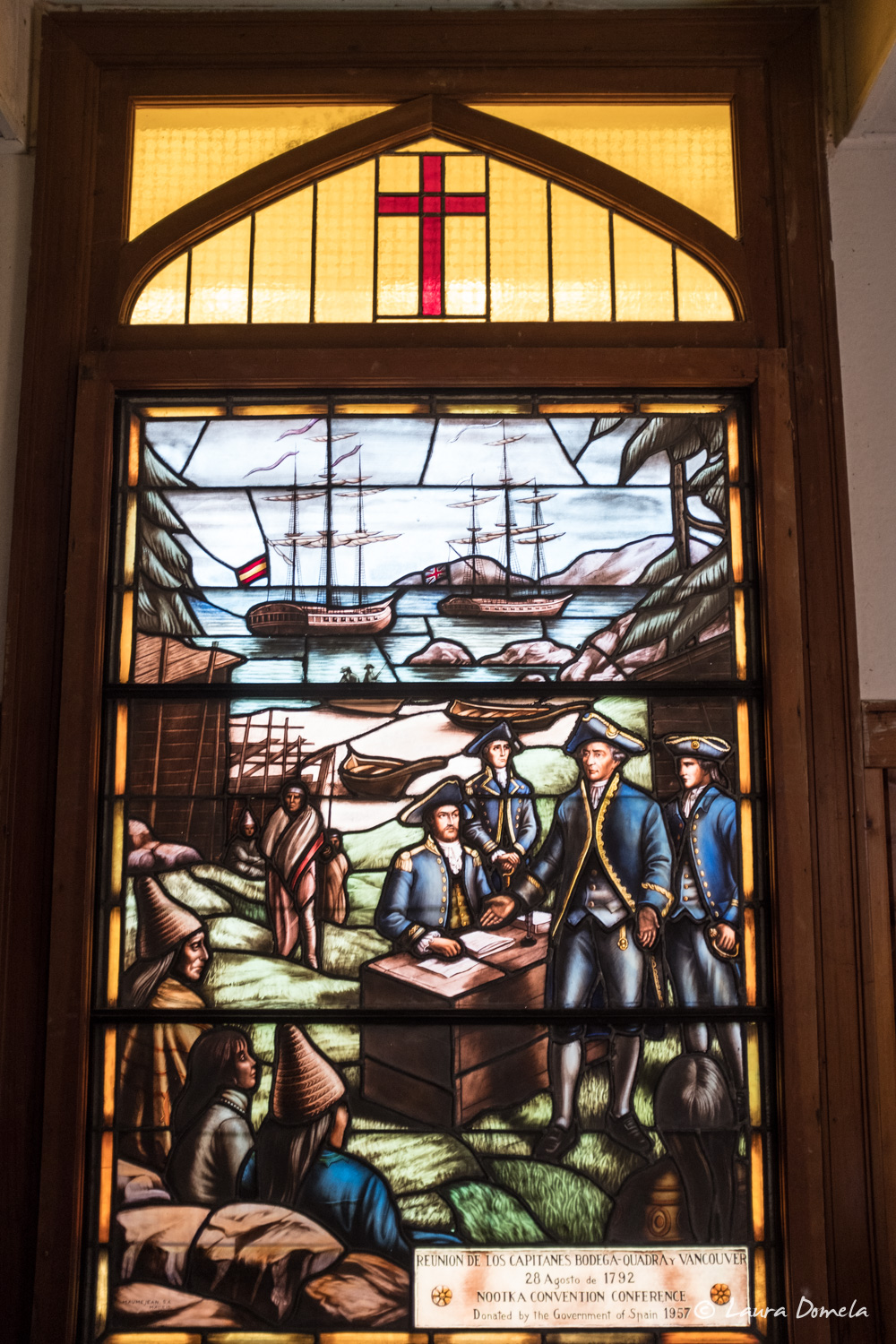 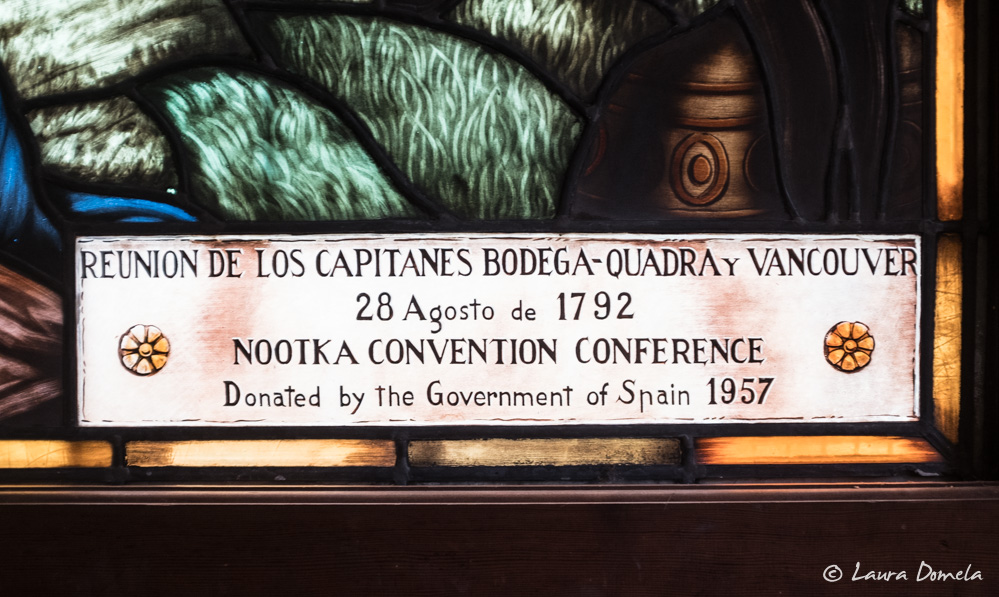 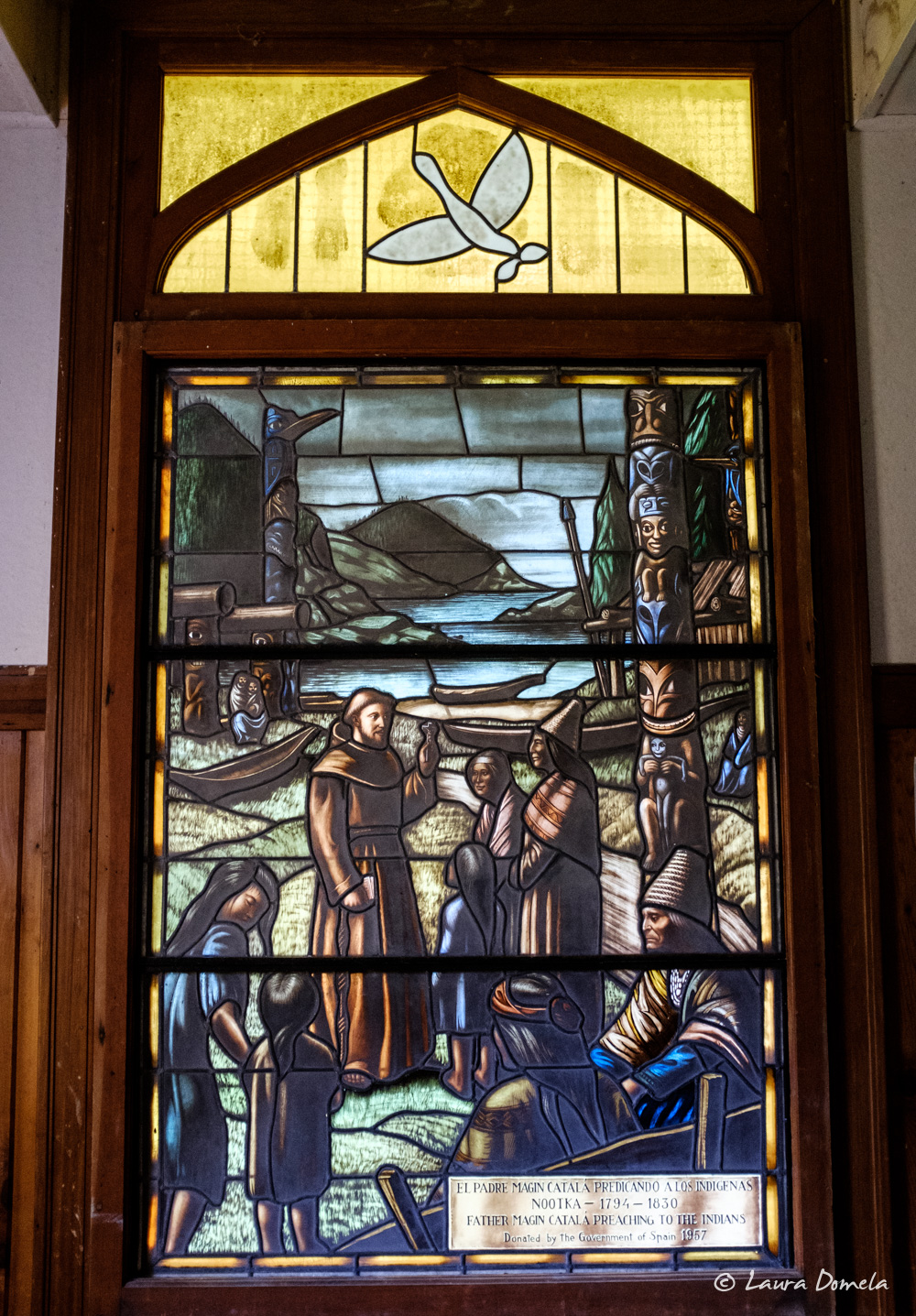 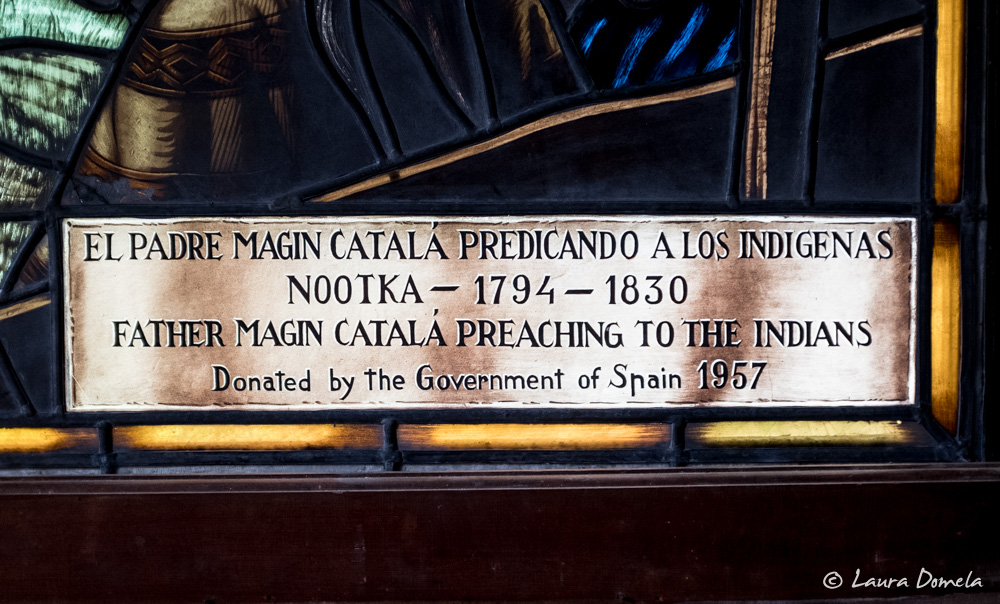 Continuing north toward the lake,  a welcoming statue stands with hands out, facing the ocean. 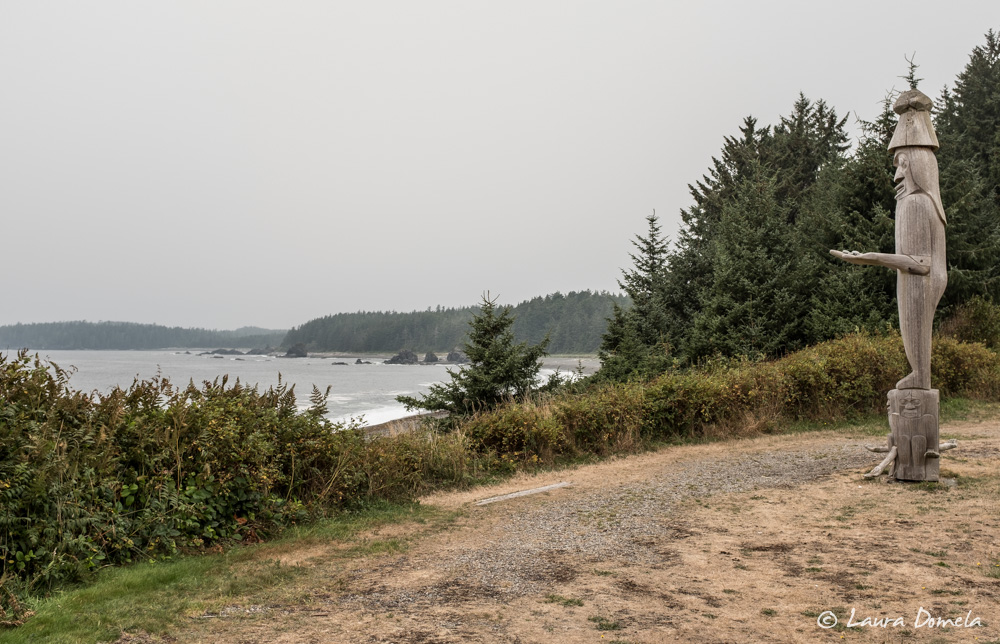 Further along the trail is a Native cemetery, and eventually, Nootka Lake. 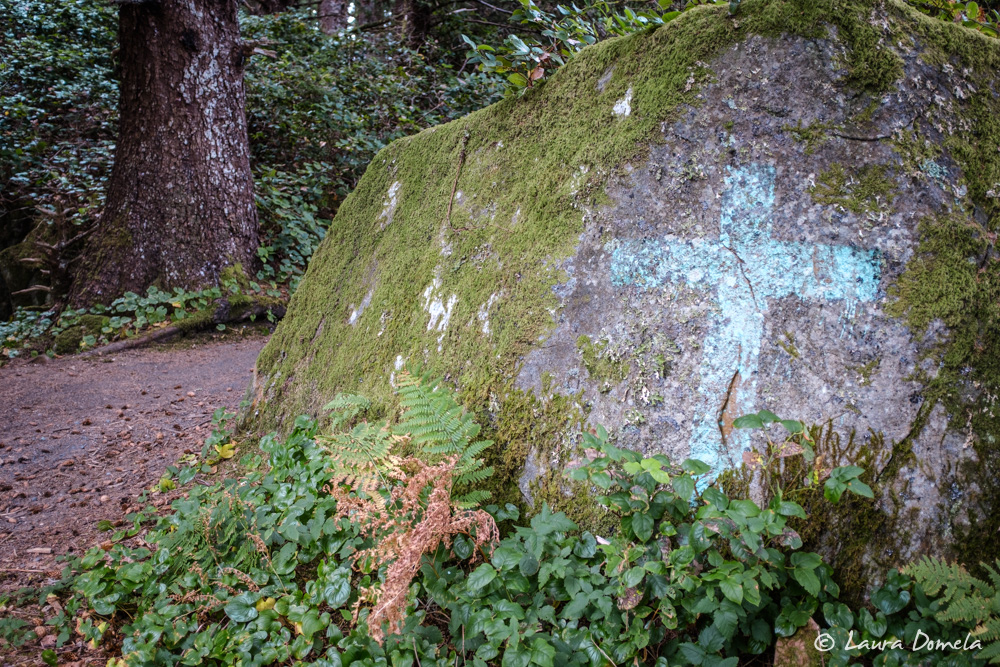 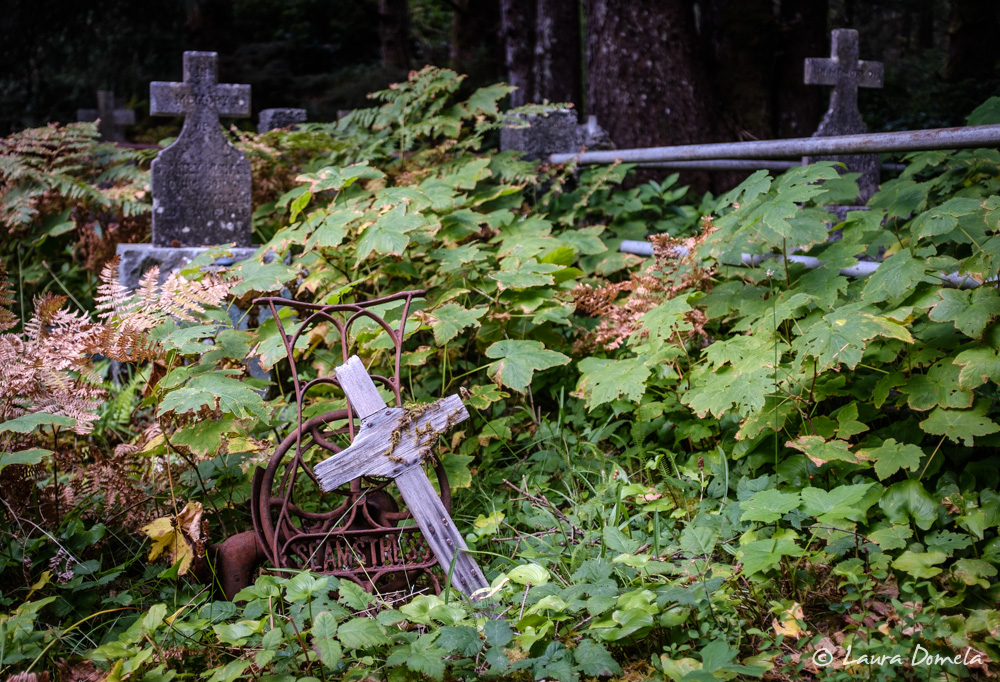 After a quick glimpse of the lake, we headed back to the lighthouse, one of the few lighthouses on the coast that’s easily accessible to boaters.

To get to the Nootka Lightstation, you clamber across a beach trail out to San Rafael Island, then up a series of stairs, rock ledges, and ramps (all very well-maintained) and then across a long bridge, past the helicopter pad, then up a few more stairs. 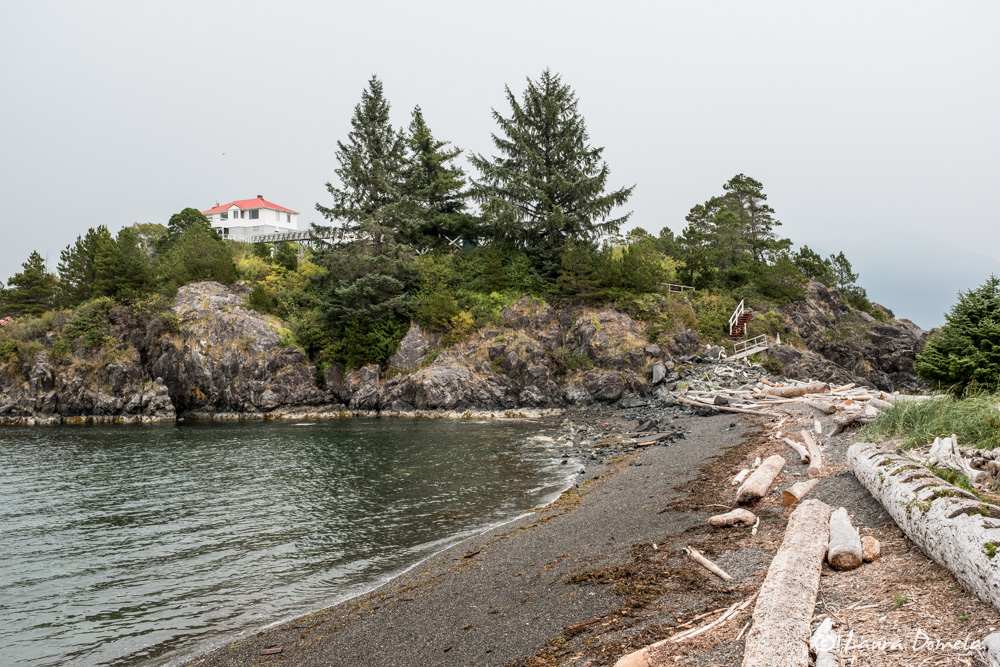 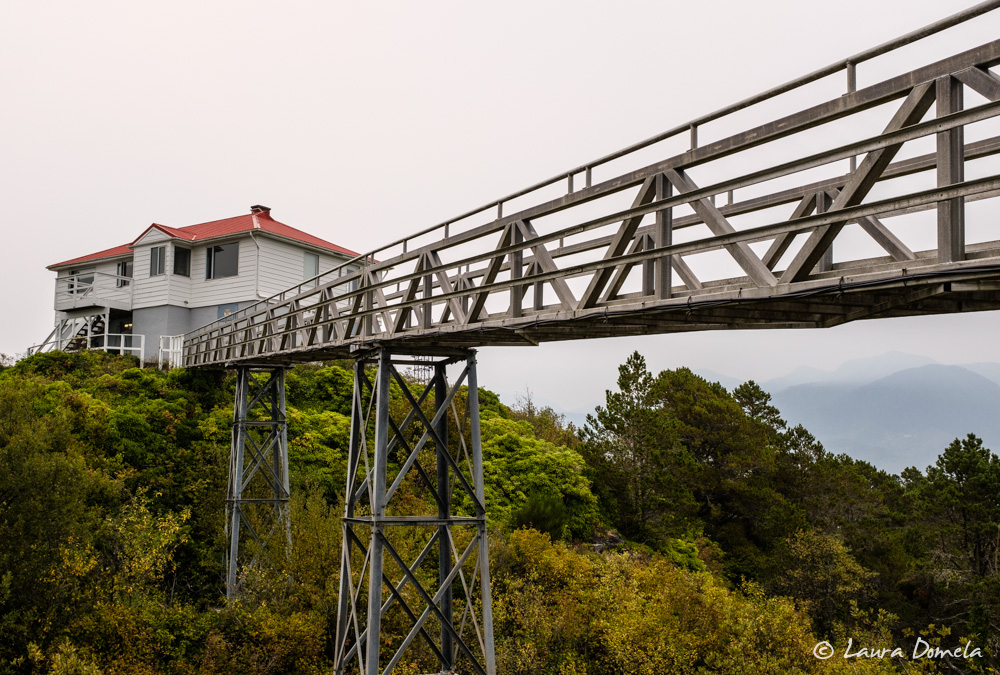 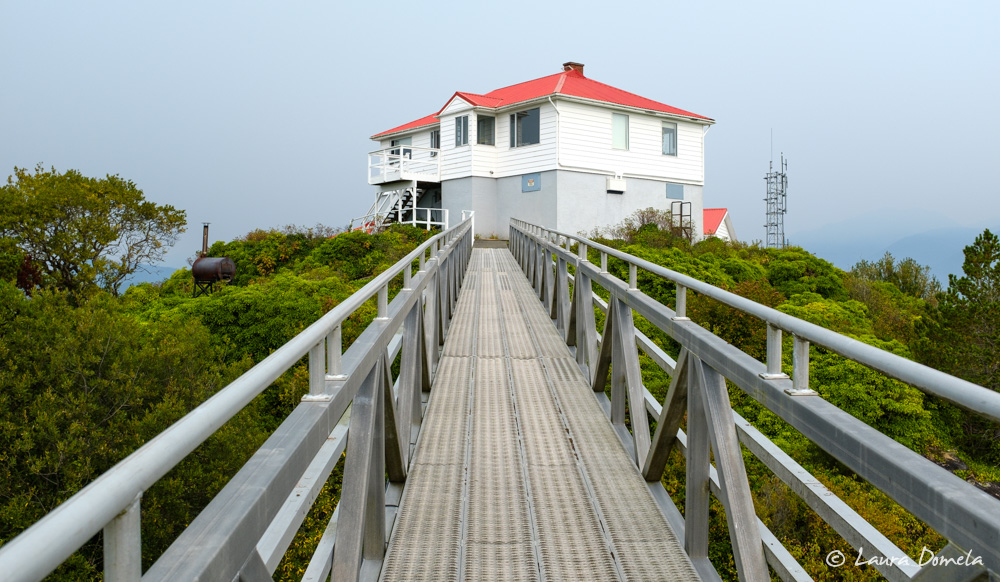 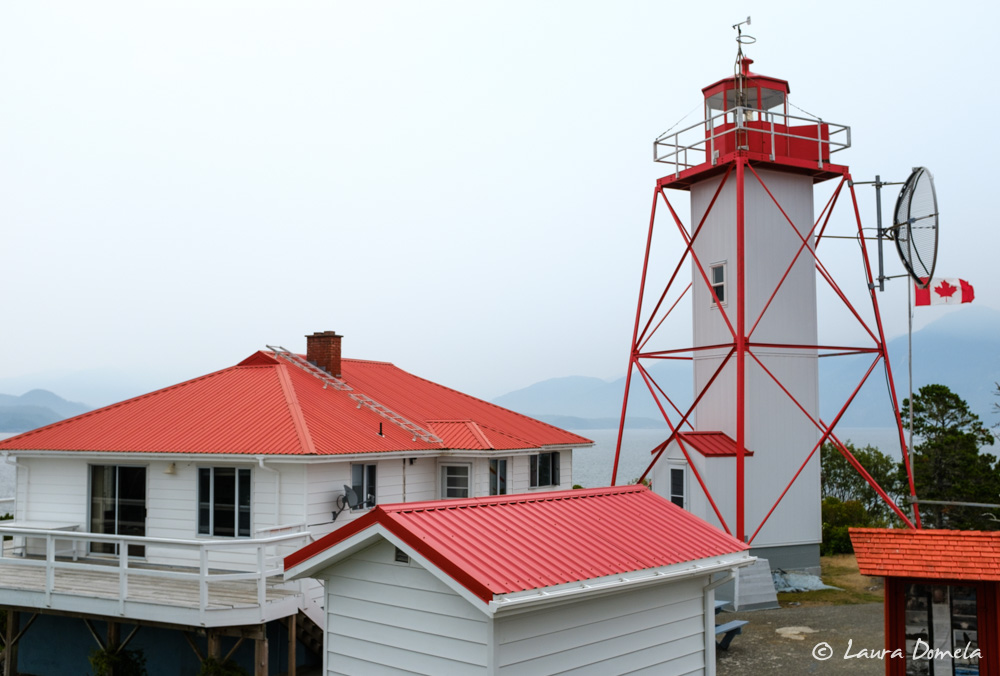 We were greeted by the lightkeeper, Joanne. She and her husband, Mark, (former long-haul truckers from Alberta) have been the lightkeepers here for 12 years, and two weeks from now they’ll be retiring and moving off this tiny rugged island. The Nootka Lightstation is a repeater station for Prince Rupert Coast Guard radio. The job of the Nootka lightkeepers involves reporting weather conditions every three hours, maintaining the light station and grounds, and participating in search-and-rescue operations.

While talking with Joanne, we watched a Beaver floatplane land (with the wind) right between two sailboats in the cove, pick up its passengers and their gear from the dock (a group of backpackers), and then taxi all the way back to shore before taking off…again right between these two sailboats. Impressive! 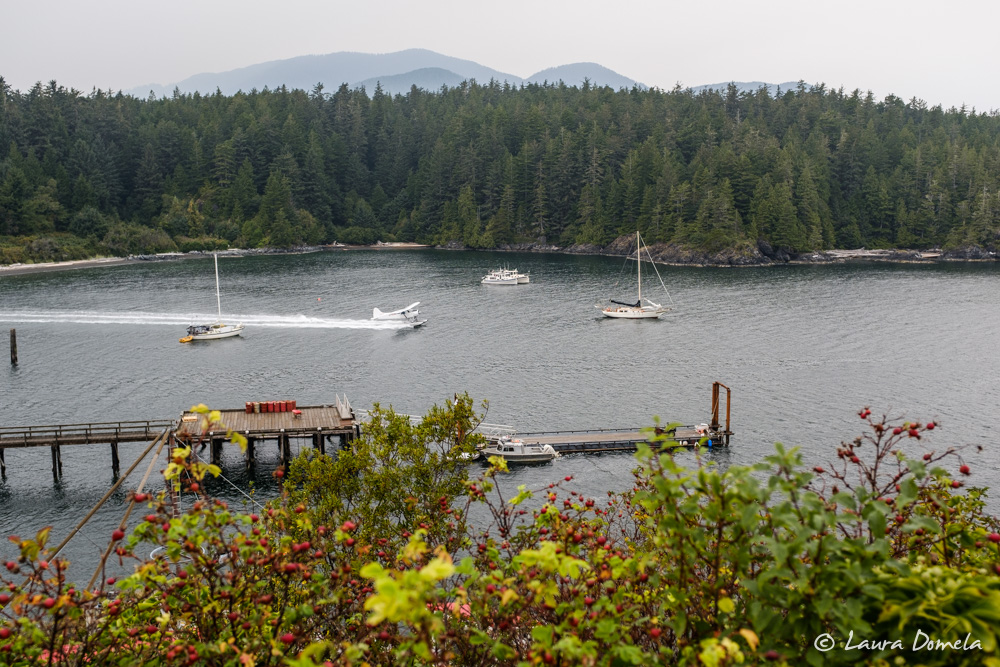 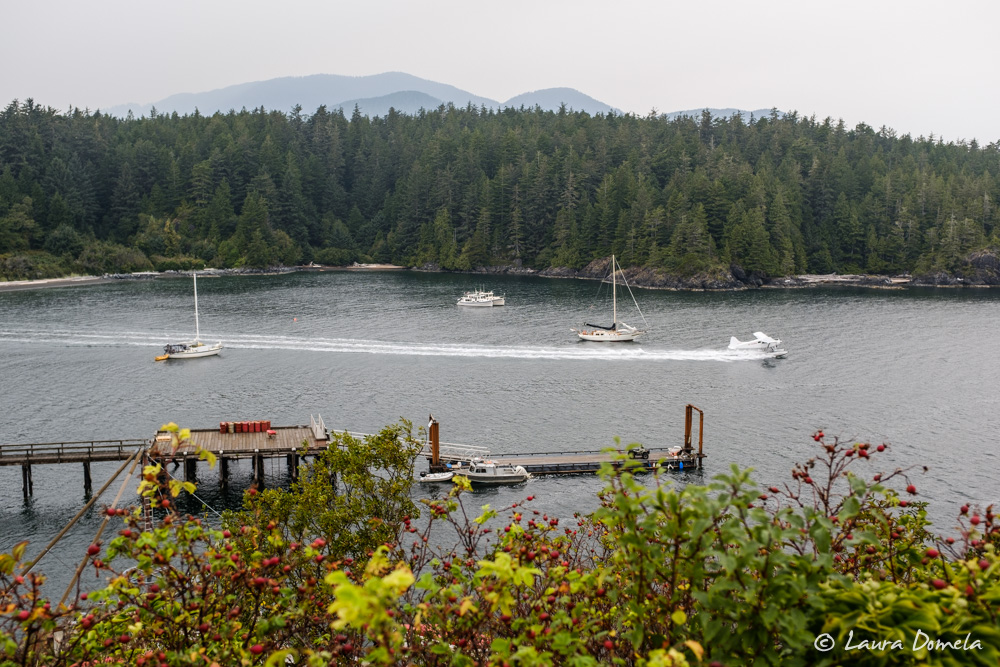 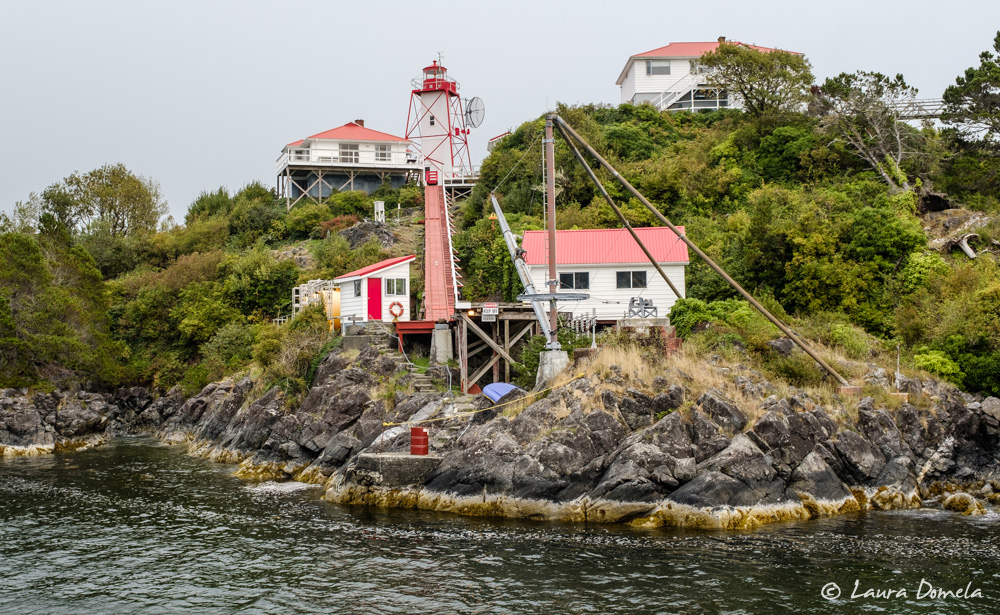 While we were exploring, the wind shifted 180 degrees, from a southerly inflow to a northerly outflow. Friendly Cove is well protected from the south, but not so well-protected from the north. Chop rolled through the bay and we briefly contemplated moving to a more secure anchorage nearby. Then the wind died altogether. Twenty minutes later, the southerly breeze was back. “Wind comes from all directions,” sure seems like an apt name!