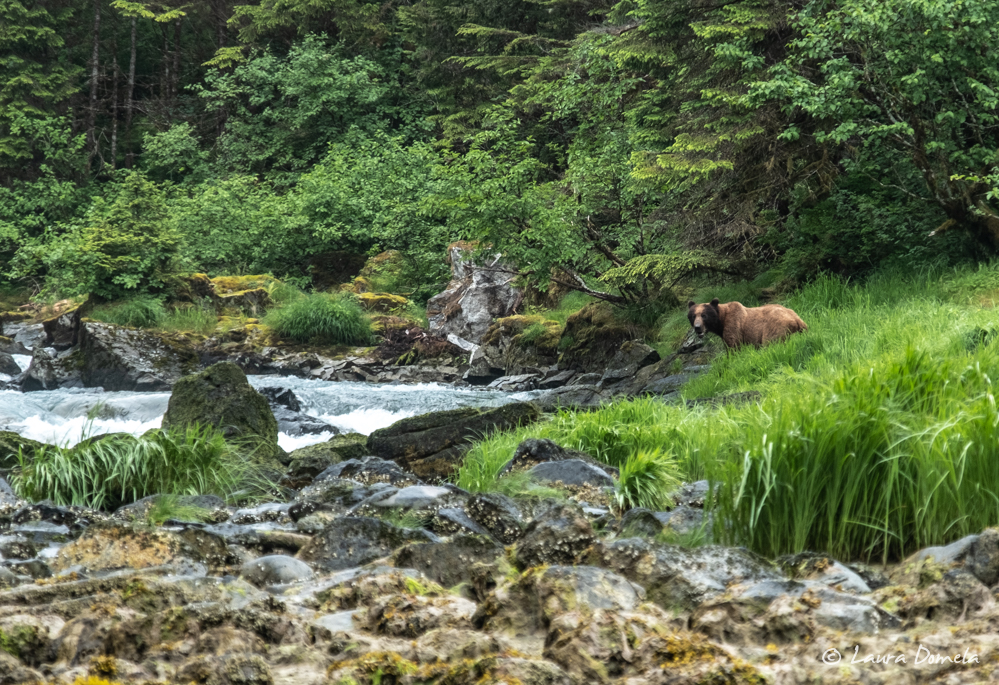 This morning we had intended to walk into the village at Angoon, then take the dinghy back to Mitchell Bay during the afternoon slack. However, when we did a bit more research on the currents, we realized that Bridge Point had a reporting station, and that slack current this morning (turning to flood) was just 15 minutes from the time we were looking it up! So, instead of walking into town, we geared up and headed out in the dinghy to see if we could get in easily and explore Mitchell Bay for a little bit.

When we got to the narrowest part near Bridge Point, the current was still ebbing, but the flow was all laminar and easy to manage. And, because it was still ebbing (and not yet slack) it meant we had even more time than we thought we would inside. 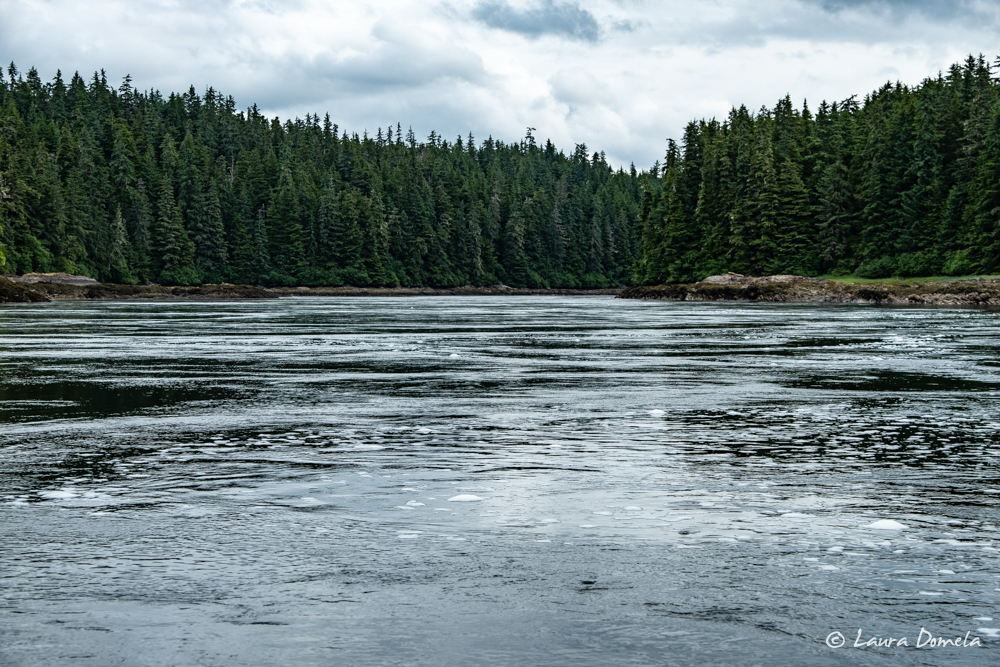 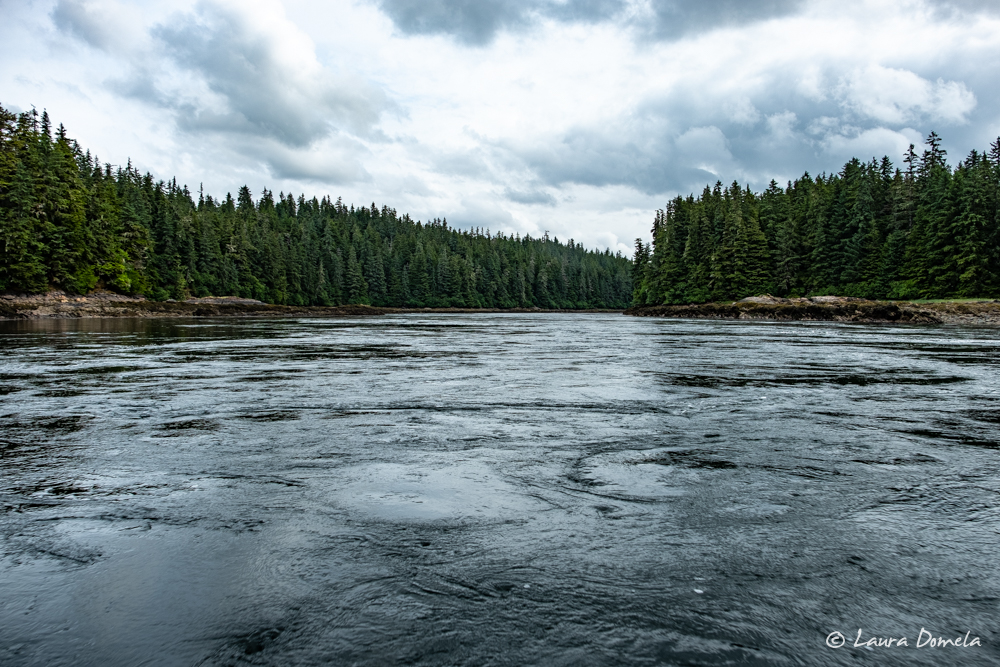 We spent about 40 minutes inside, exploring, but unfortunately it started to rain, so we didn’t get any interesting photos. We saw some porpoises, a couple of deer on shore, and a martin or mink or something on shore. I’d love to come back here on a nice day and spend a bit more time.

Interesting note: the current was still ebbing pretty strongly when we entered (supposedly right at slack, according to Navionics), but when we left 40 minutes later it really seemed like actual slack. Your tide and current tables are good as a point of reference, but always be aware that they can be off as much as an hour (in our experience), so trust your eyes. When transiting rapids always look at the water surface, see which way and how fast the current is going compared with predictions, and adjust your plans accordingly. 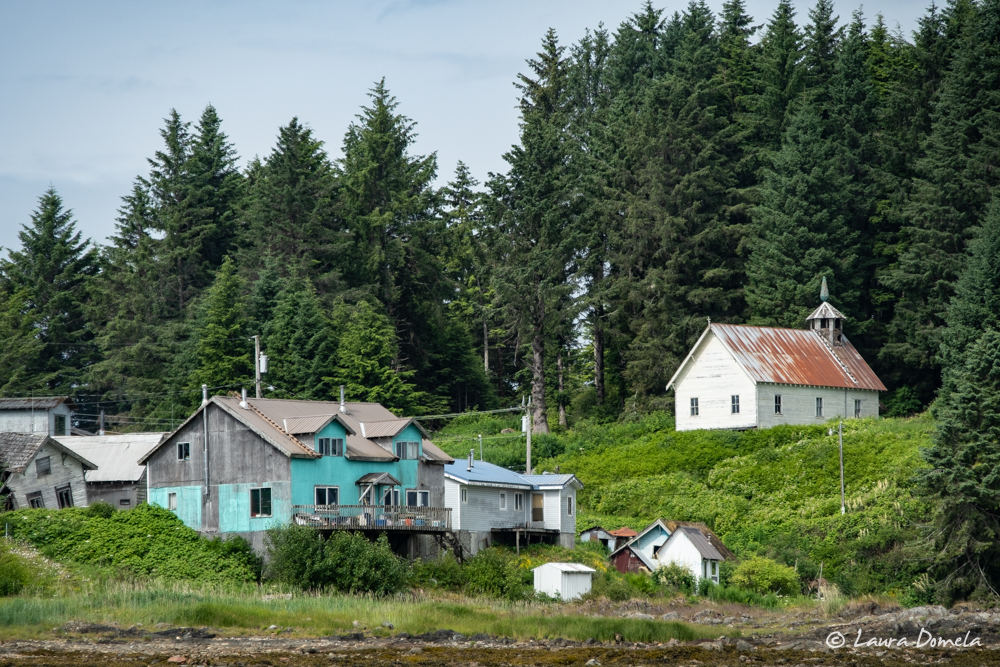 We got back to Airship, cooked some breakfast, and decided that we really should continue on (rather than go back to Mitchell Bay at afternoon slack or walk into the village…next time!) so we left Angoon against a flood current. We mostly saw about 3-4 knots against us, but at one point we had over 5 knots of opposing current. (Airship can go 14 knots when she needs to, which is really nice!)

Kevin took some video of us leaving through the current which might give you a better idea of what it was like:

As we left the channel, this sea lion was trying REALLY hard to get up onto the buoy at the tip of Danger Point. He was having a heck of a time and we watched him (or her) fail multiple times. Poor guy! 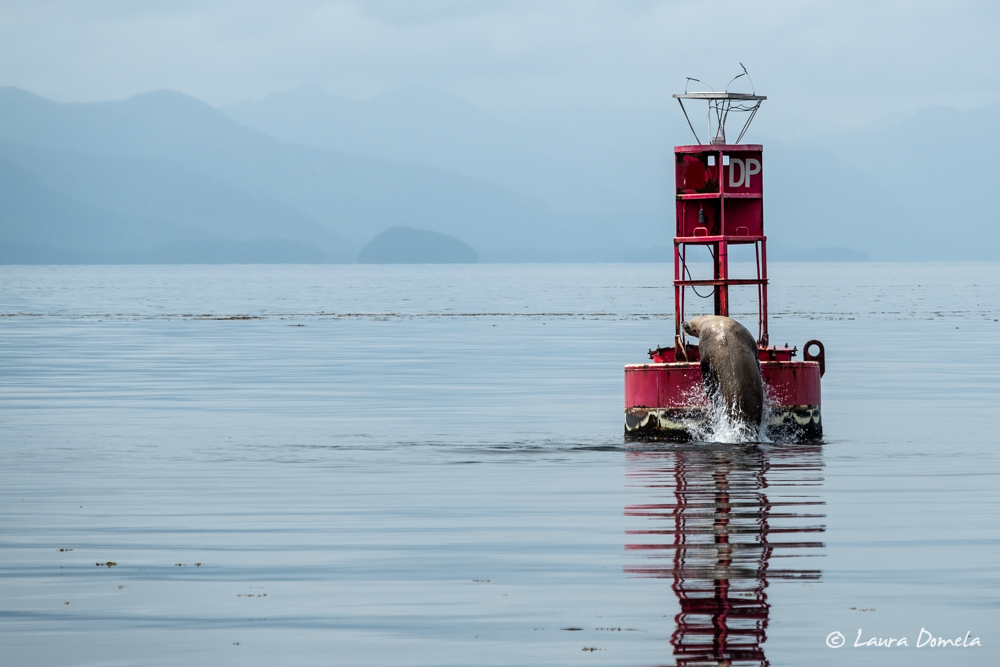 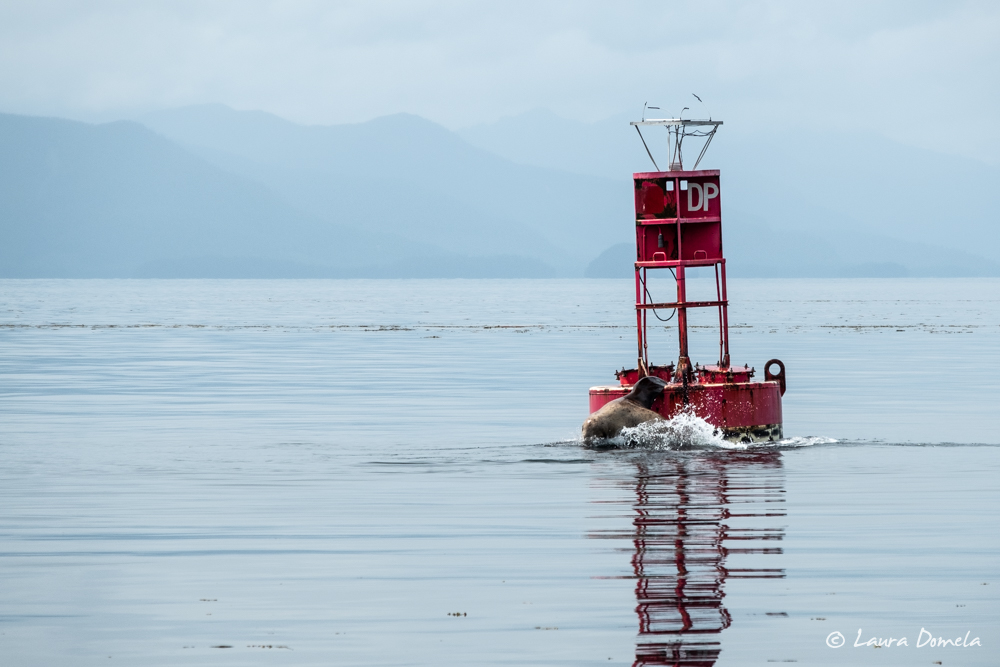 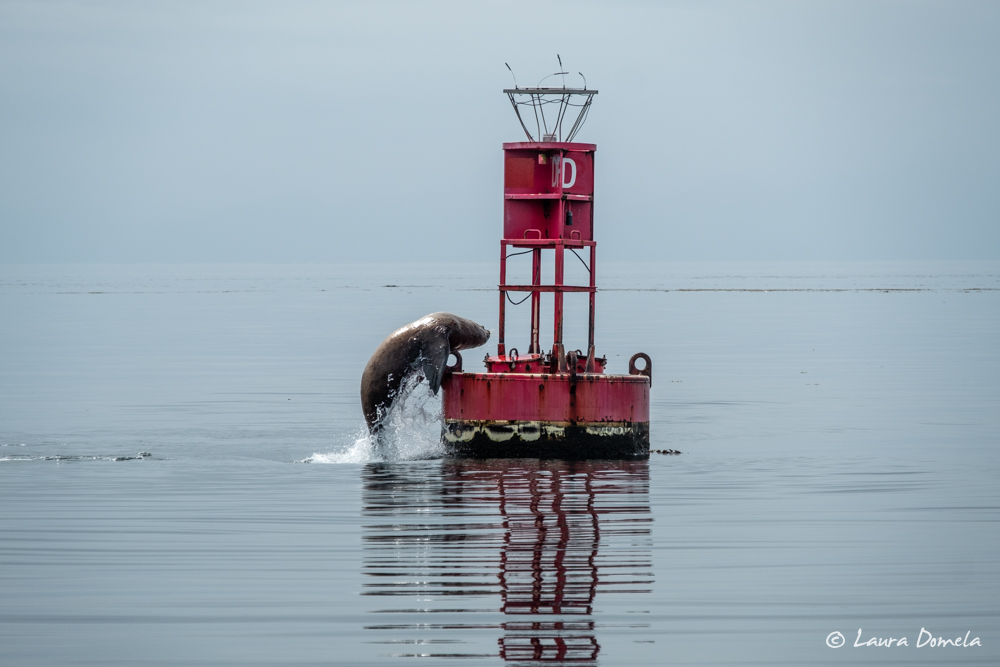 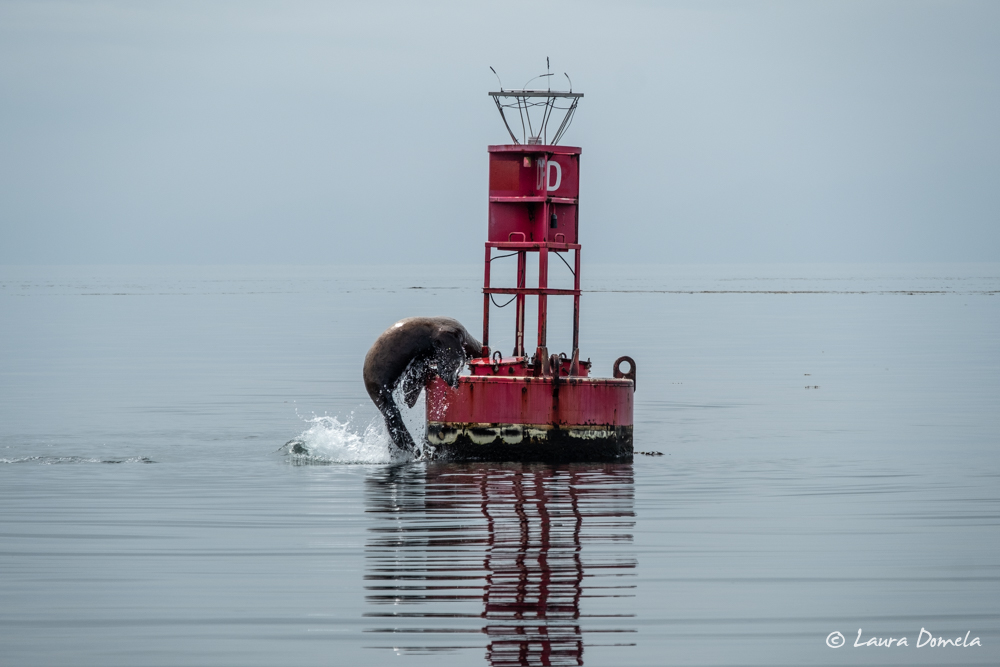 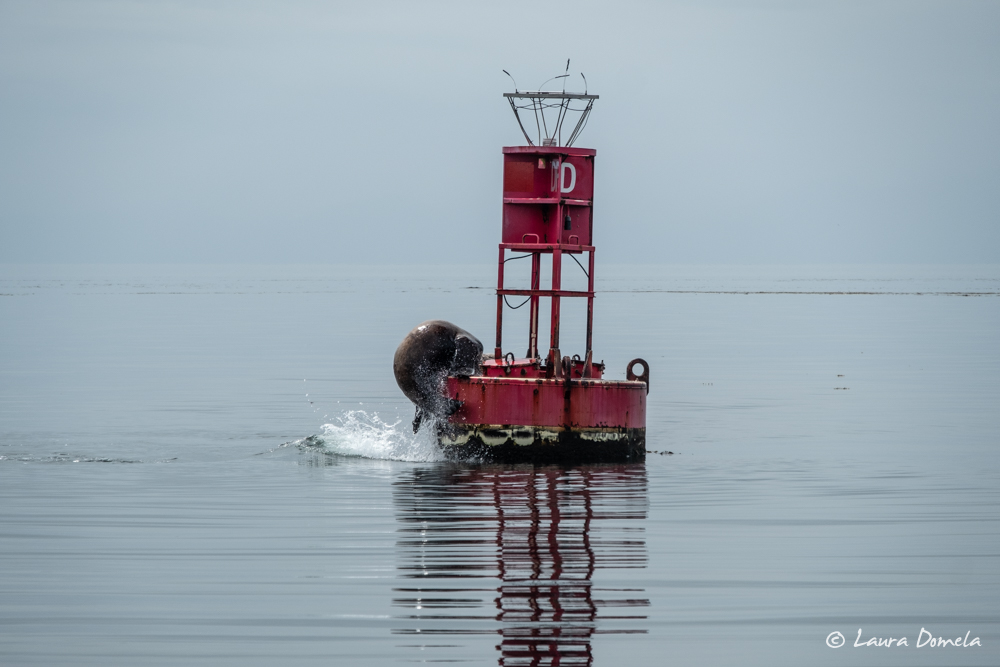 Looks like he’s sizing it up for another shot, but we watched for another minute or so and it seems he may have given up. 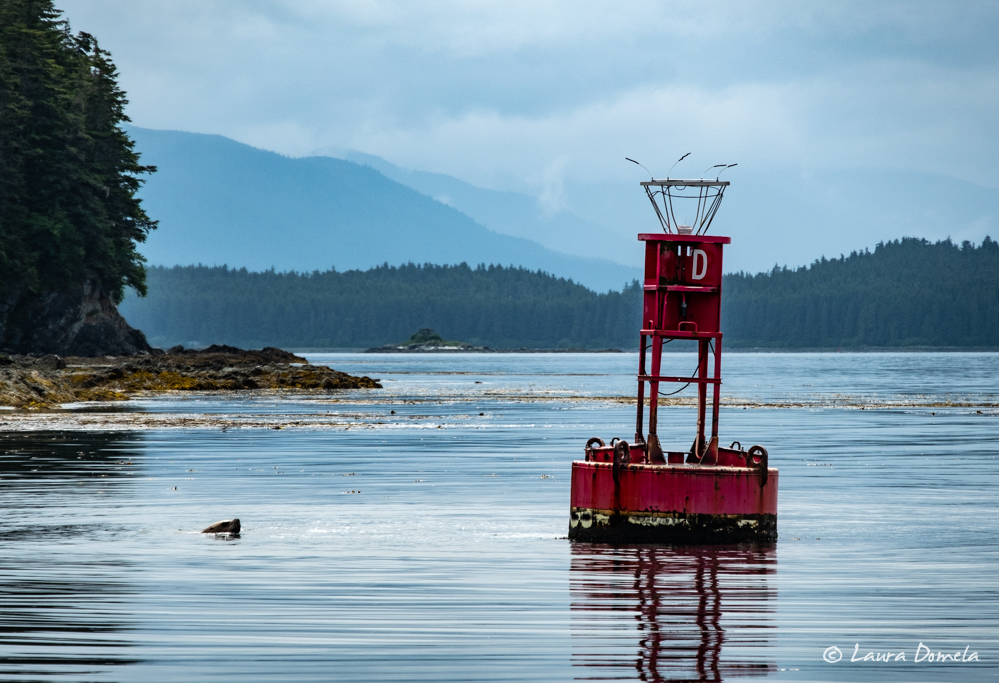 Chatham Strait was calm today — 7 knots of wind or so with one foot chop or less. It was gray and drizzly, but we saw several humpbacks spouting and diving in the distance, and a few trollers and other pleasure boats.

We decided to stop and anchor in Ell Cove temporarily while we ran the dinghy up to the Hidden Falls Hatchery to see if we could get a tour. Unfortunately, we were a bit late, as they close at 4:00 p.m., so we grabbed an info sheet and decided to continue on down to Takatz (6nm further south) and then come back in the morning if we could get a reservation. (Their info sheet gives a link to their calendar, you go to the calendar to reserve a spot via email, and get a note back saying they accept reservations no less than 72 hours ahead, which it does not say on their info sheet. But, according to their calendar, they are open tomorrow with no other scheduled tours, so we’ll show up and see if they can accommodate the two of us.)

Anyway, we anchored in Takatz Bay and since it was high tide we opted to take the dinghy up the short river to the waterfall. We have often seen bears back here, and it’s just beautiful even if there are no bears.

When the tide is high, there’s still a fair amount of careful navigating to be done to get up where you can see the waterfall. There’s a slightly deeper channel to the far right of the tidal flats, and that will get you up to the grass-covered point on the right, but then you need to cut over a little to the other side to be able to go much further. 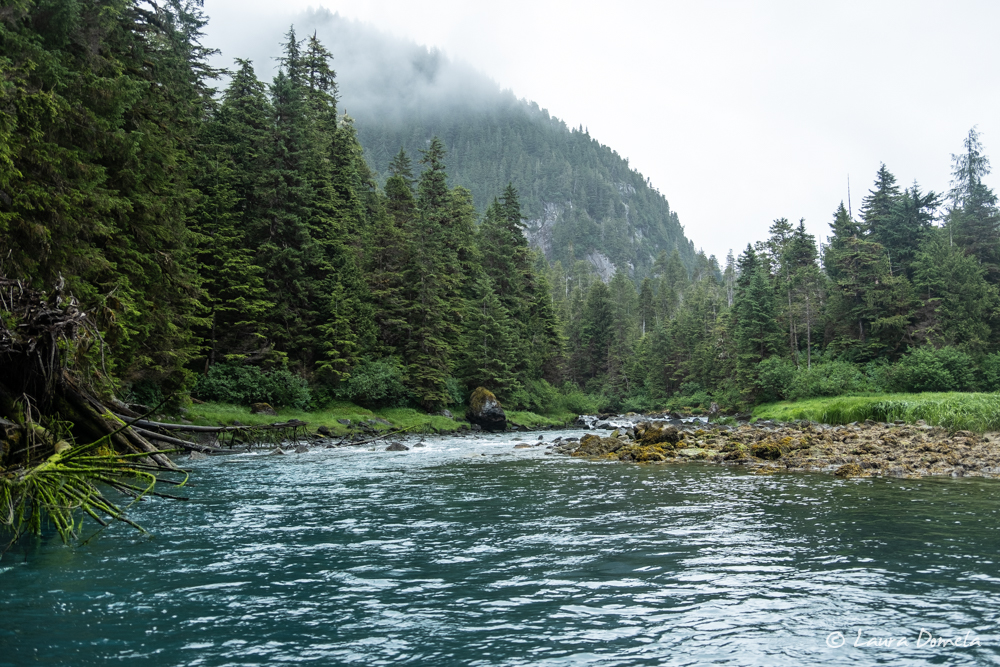 We were just about to turn around when I decided to stand up and get a photo of the waterfall. But hey! What’s that spot on the right over there? Brown bear! 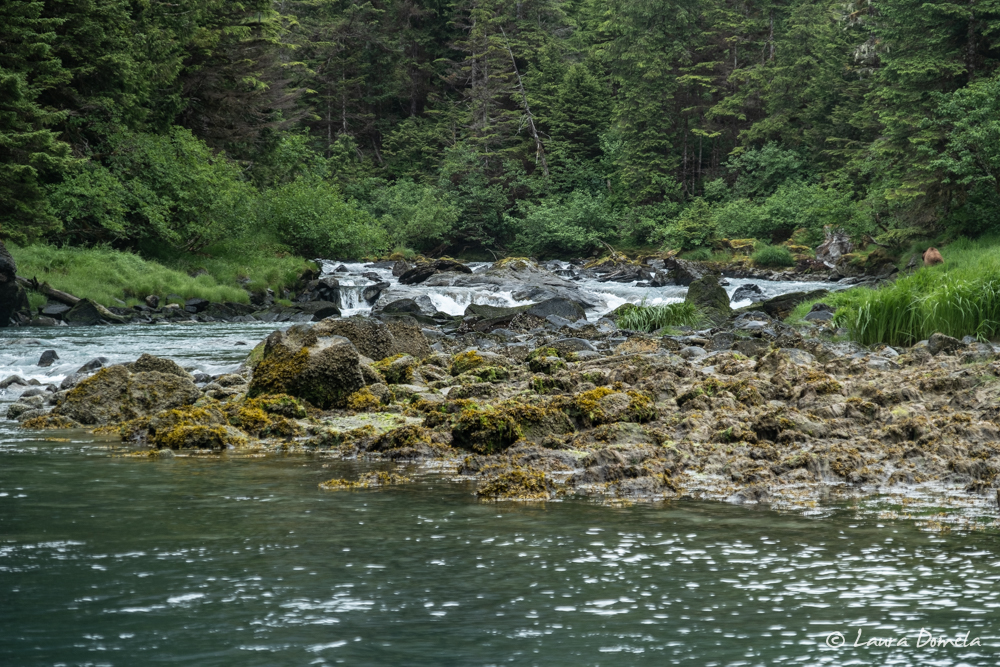 This guy was big! I took a few more shots before he smelled/heard us and ran for cover. 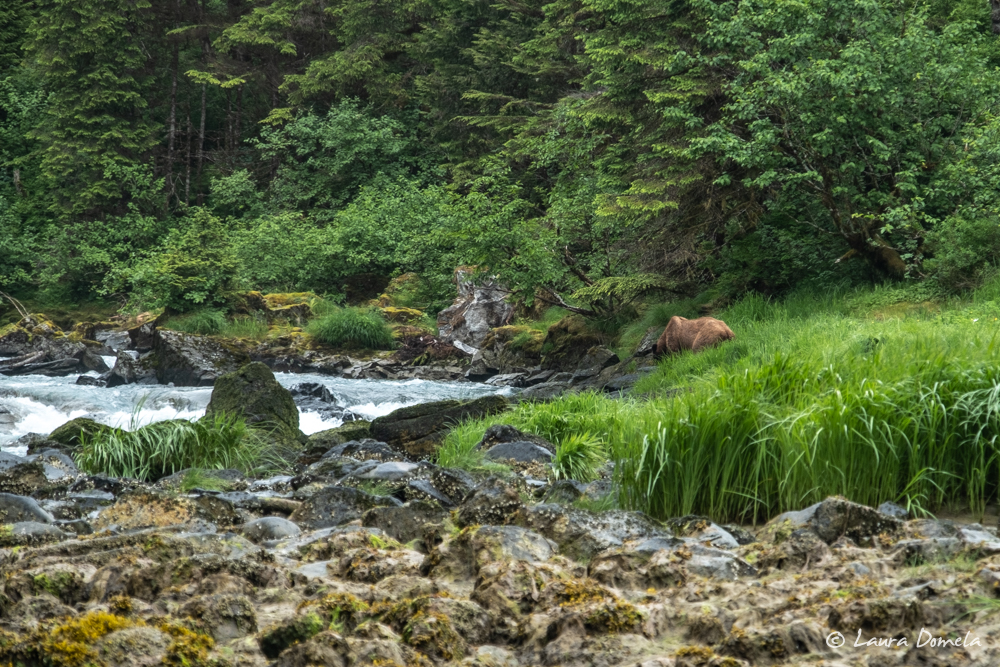 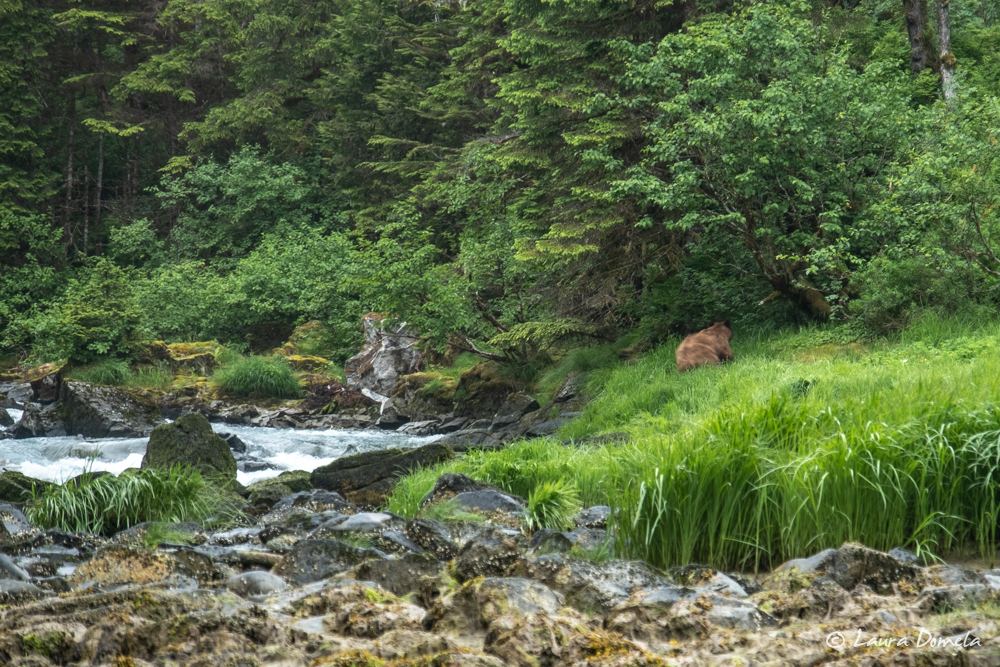 It’s always such a treat to get to see these guys before they see you and run off.

We’re anchored in here now with a large 110ft yacht, and two seiners that rafted together. 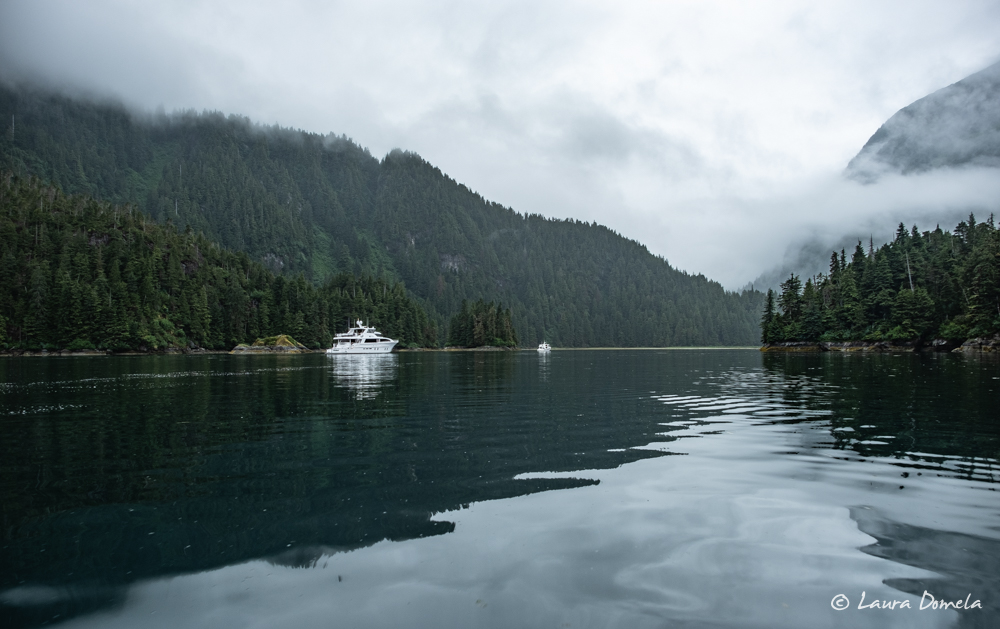 Tomorrow, depending on the conditions in Chatham, we’ll either take the dinghy back up to Hidden Falls, or take Airship back to Ell and dinghy from there. Or, if it’s super rainy and awful out, we’ll just continue on. We’ll decide in the morning!