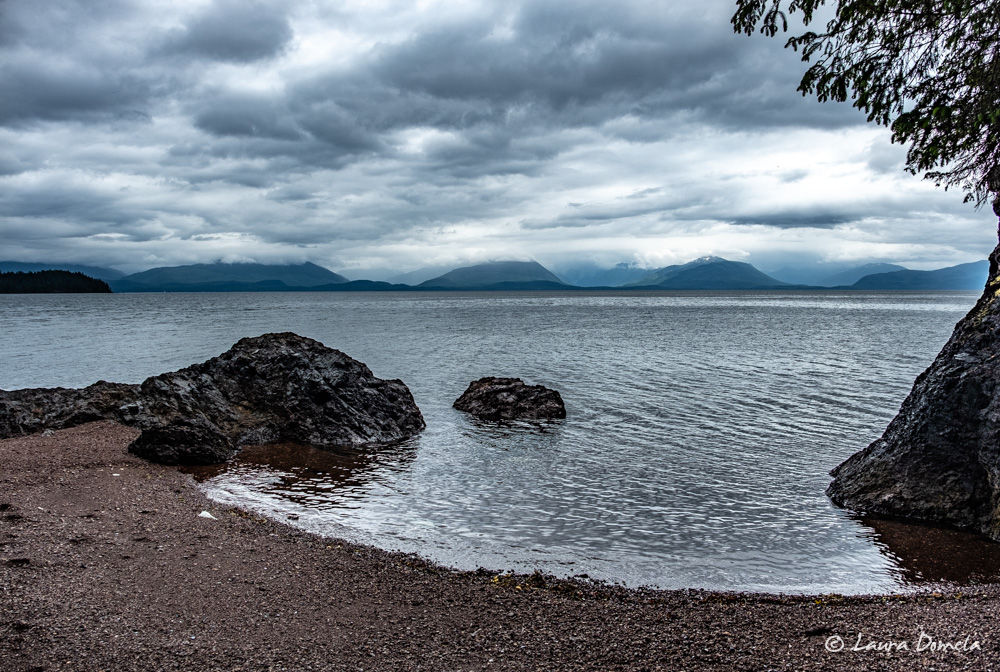 After a few days in Juneau doing some boat chores, Kevin and I picked up our granddaughter Mijonet at the airport. She’s 10, and flew in from Portland (for her fourth year in a row!) to join us for a couple weeks. We left Juneau and headed out for the first night in Funter Bay.

We met up with Dan and Eileen on Fortunate later that afternoon over at the floating dock on the south side of Funter Bay. Kevin and Mij went to put crab pots out over in Crab Cove (such a hopeful name!) and we had dinner aboard Fortunate. Dan cooked up some marinated flank steak, baked potatoes, and we sautéed some prawns and made a salad.

We awoke at around 3:00 a.m…the waves were funneling into the bay and were unfortunately hitting directly on our beam. We rolled around for a while and eventually decided to move over to the more sheltered Coot Cove. I texted Dan and Eileen so they weren’t surprised to see us gone in the morning, and we got a few more hours of sleep at anchor.

In the morning, Kevin and Mij went to check the crab pots, and we scored! 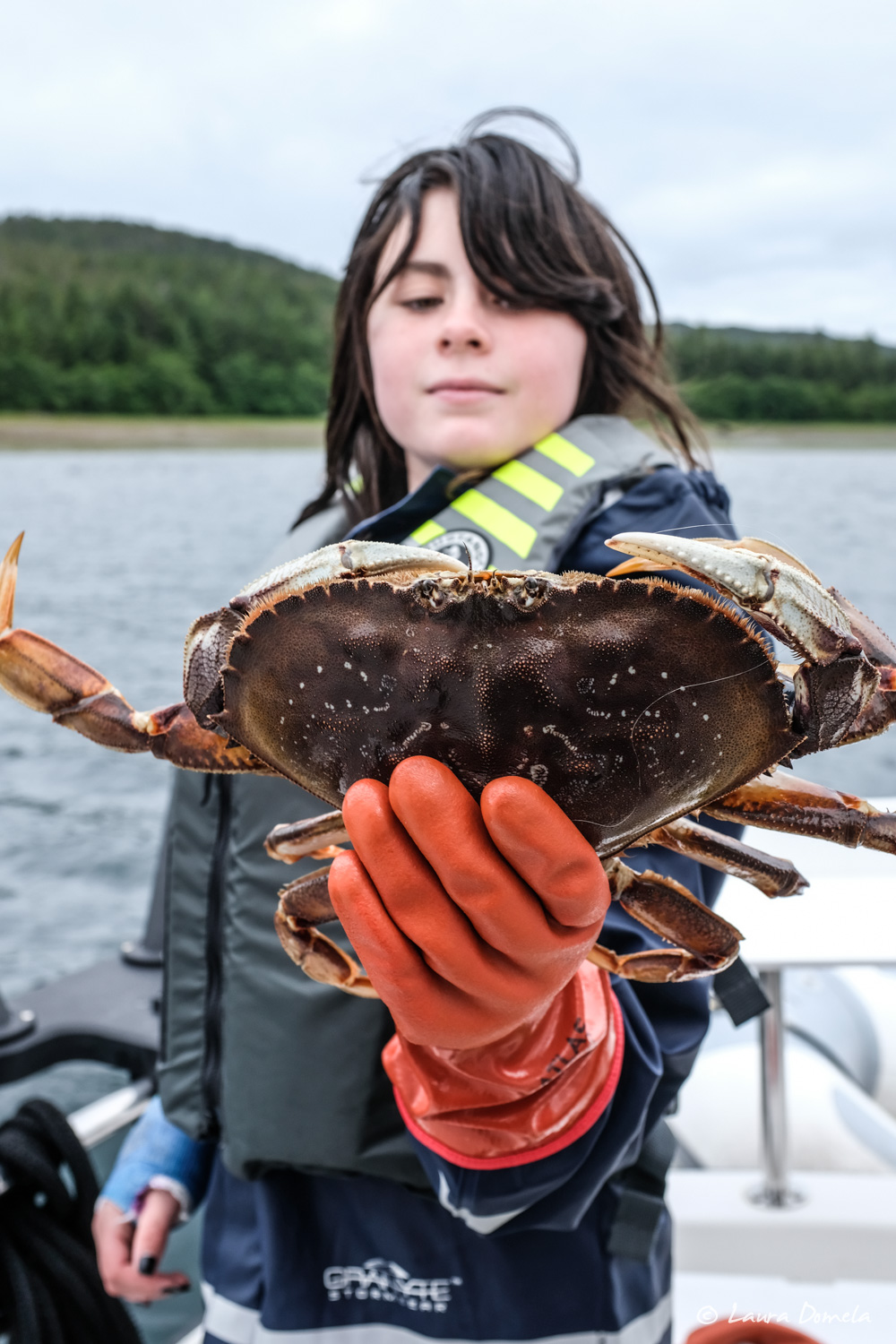 We had four big keeper male Dungeness crabs! Oh yeah, notice the cast on Mijonet’s right arm? She broke her arm and had to get a cast put on it the day she was supposed to fly from Portland to Juneau, so we had to shift her flight a day and now she’s got a cast that goes from her hand almost all the way up to her shoulder. Poor kid! (It’s a small fracture up near her elbow, and she’ll only need the cast for three weeks, two of which she’ll be here in Alaska and hopefully somewhat distracted from such an annoyance!) 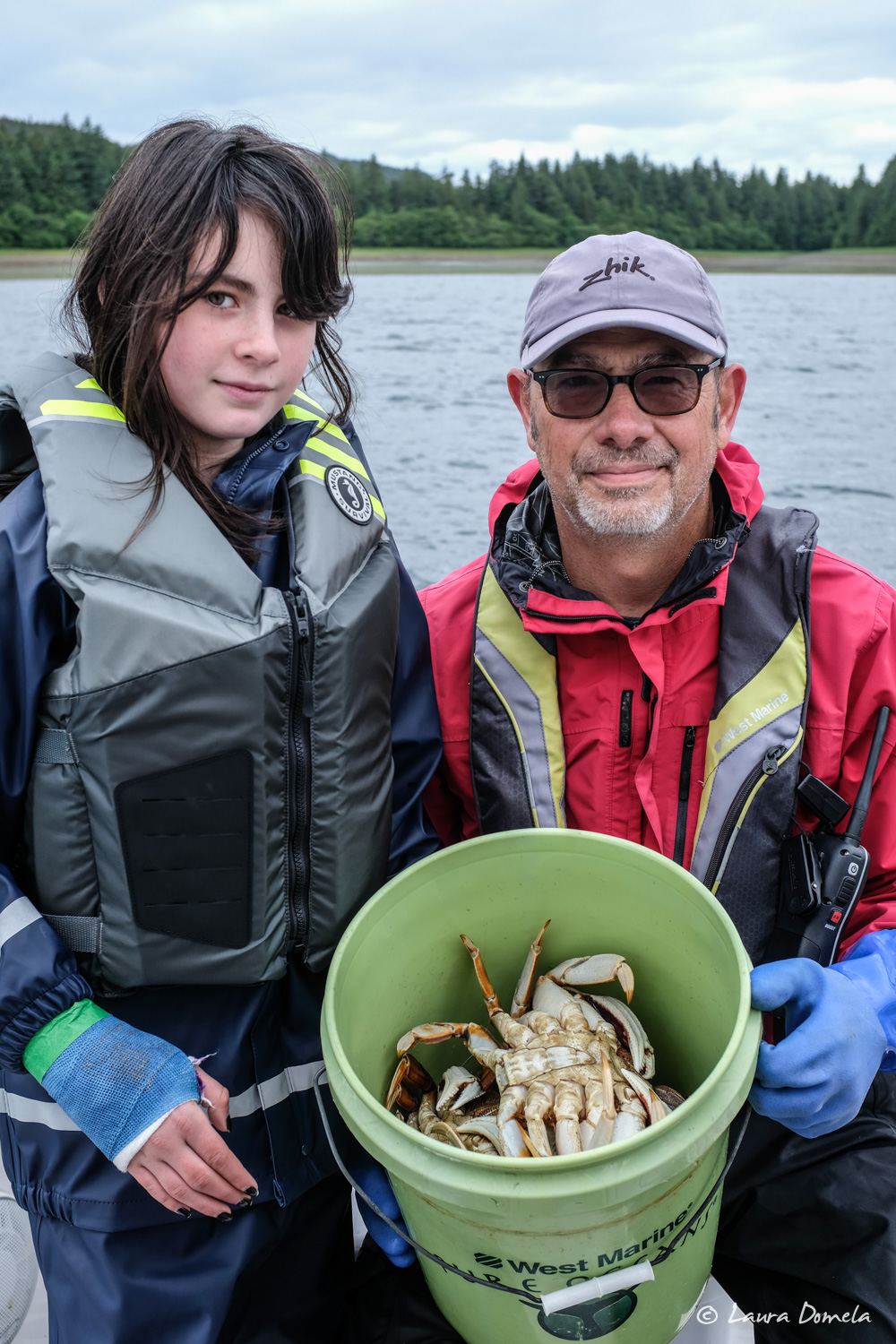 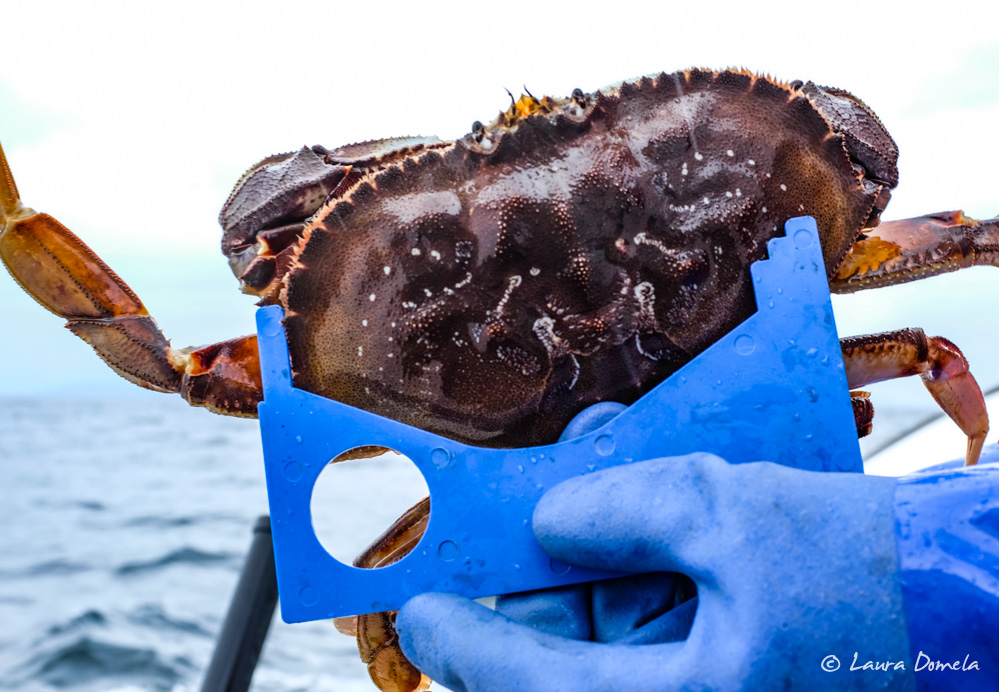 After breakfast we headed south in Chatham Strait to Pavlof Harbor. Pavlof Harbor is inside Freshwater Bay on Pitt Island (just north of Chichagof Island) and is a lovely anchorage, surrounded by snow-capped mountains with a big waterfall at the head of the bay. It has enough space for quite a few boats. We rafted with Fortunate and then Kevin and Mij and I took off to go check out the rock formations we passed on the way in while Dan went out to set a prawn pot. Wilderness Explorer (an UnCruise boat that holds about 75 guests) was anchored outside the harbor and they had a bunch of their passengers out in kayaks and dinghies, so we figured we’d explore Pavlof after it emptied out a bit later. 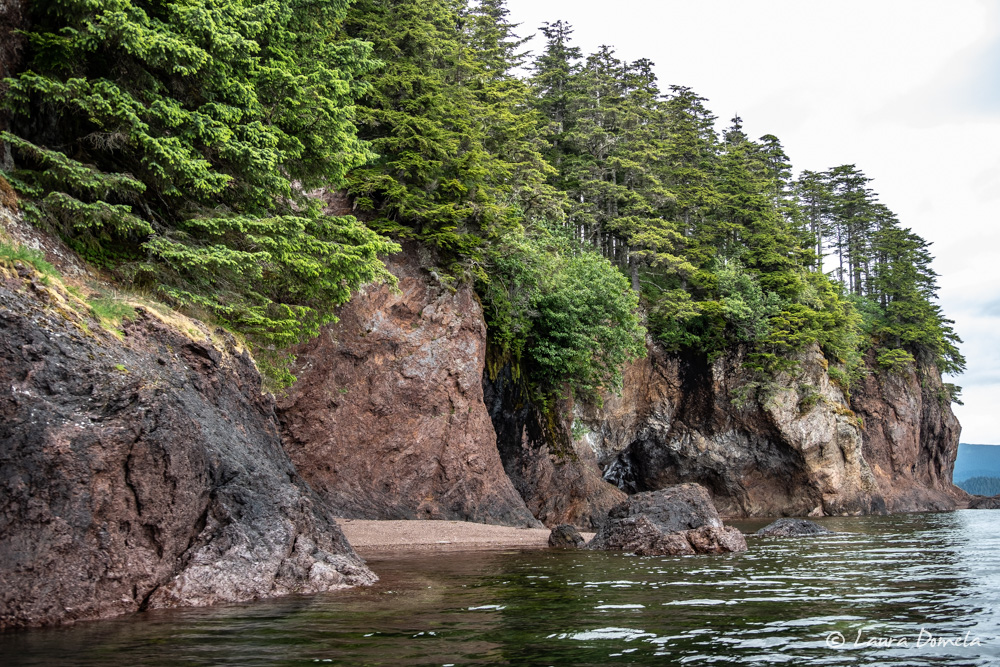 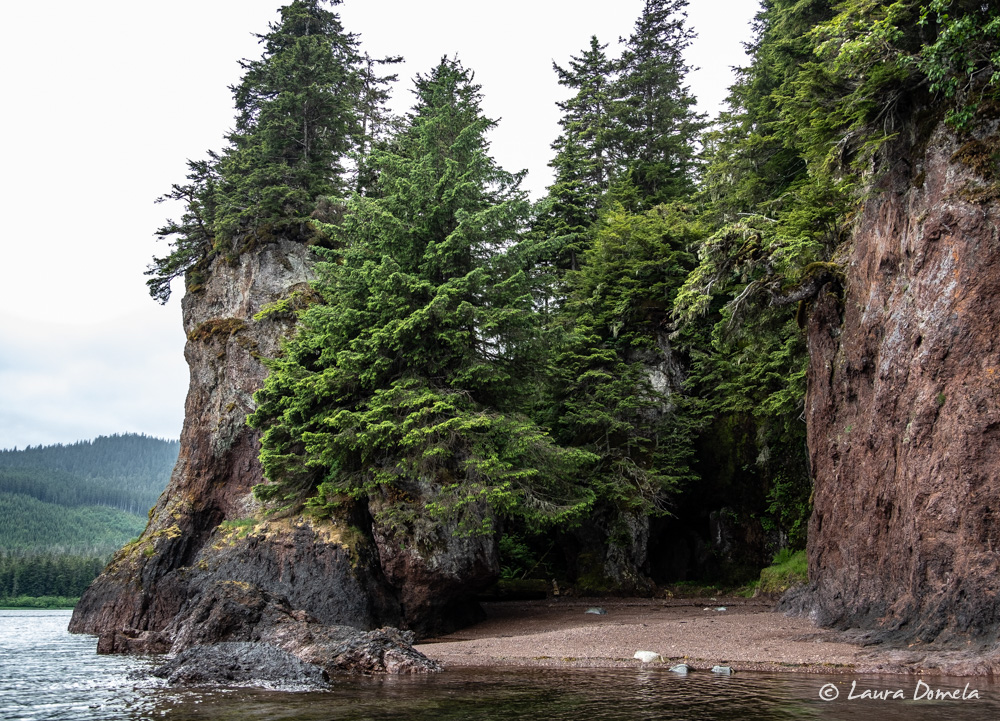 We found a good spot to beach the dinghy to explore a little on foot: 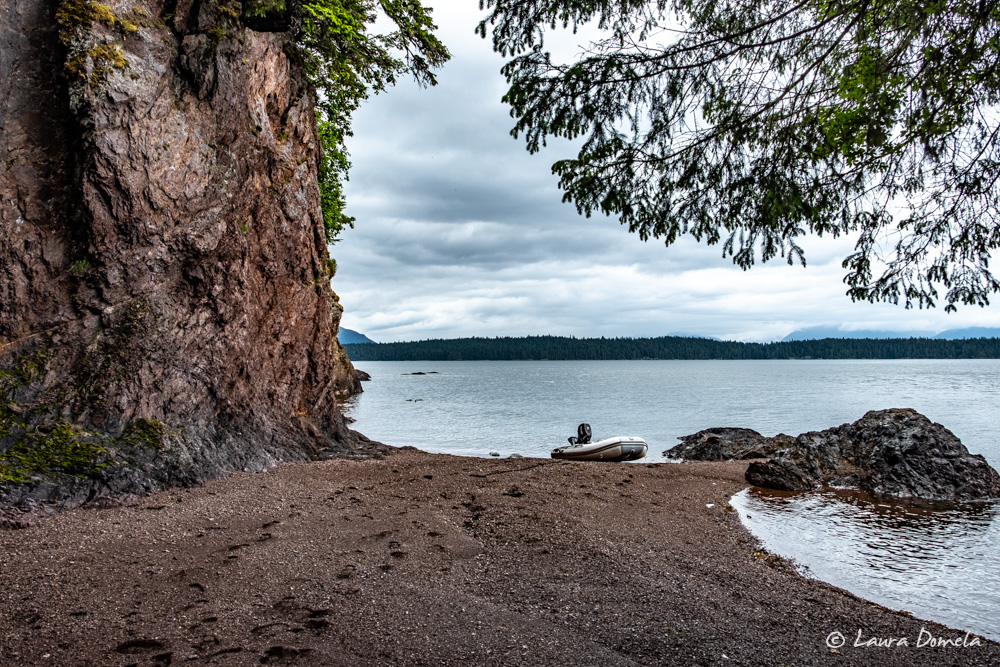 Back in the dinghy, we headed back to Pavlof and over to the waterfall at the head of the bay. This is a perfect bear waterfall! We definitely want to come back here when the fish are running! 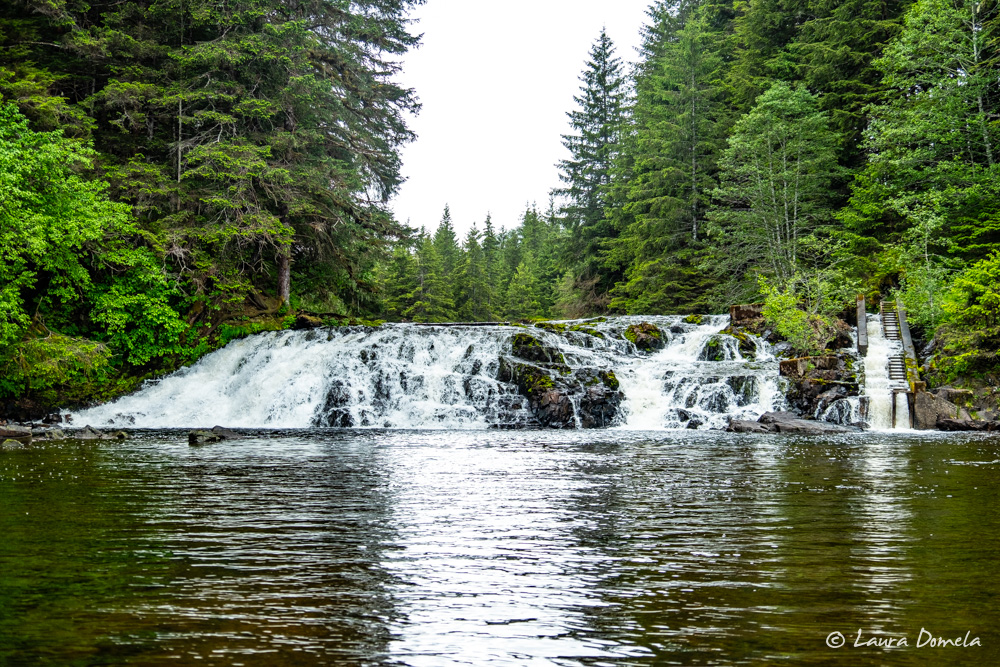 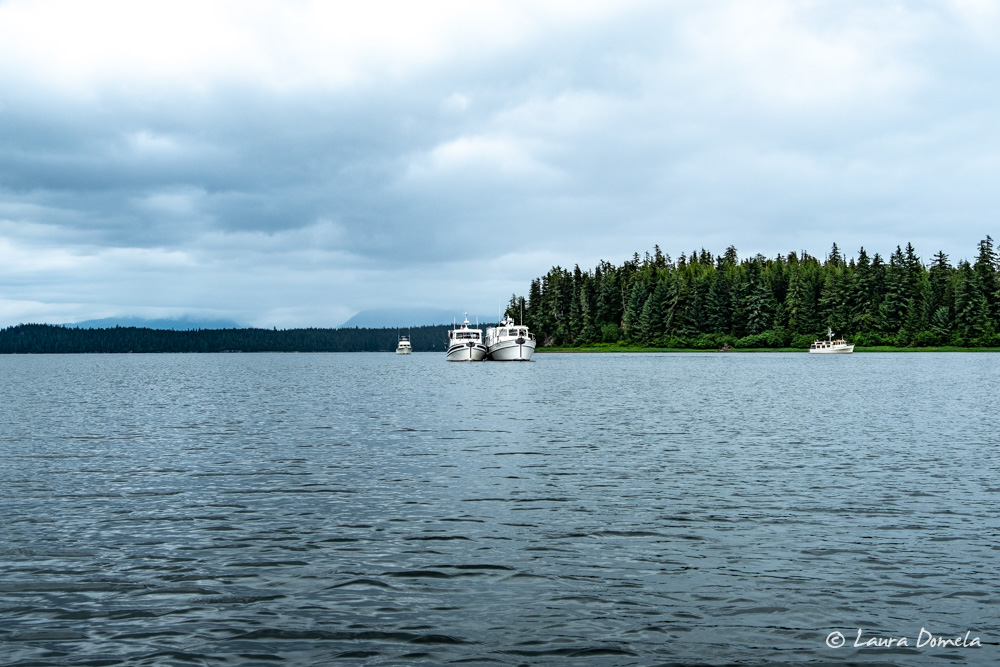 Kevin and Mij put the crab pots out, and then Kevin took the drone up for some aerials:

For dinner tonight we made Sam’s Mac & Cheese (to which we added a couple handfuls of the  crab we caught this morning) and a salad.

The next morning we got up to find that Dan had already gone out fishing and caught a nice-sized yelloweye rockfish (also known as “fish tacos”)! 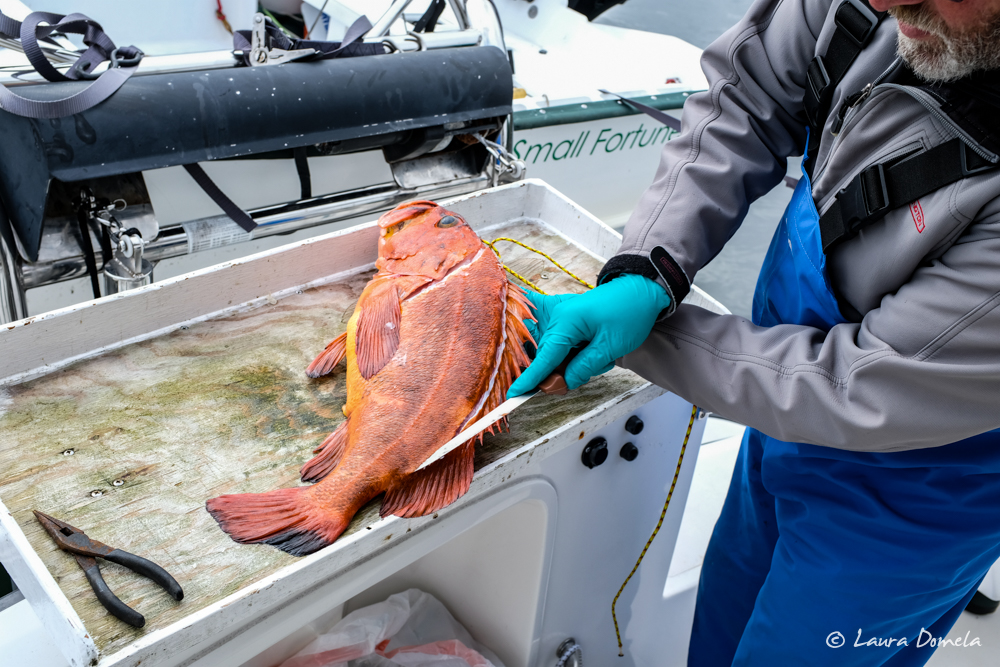 Here are a couple more shots from a second drone flight in the morning, when the tide was low: 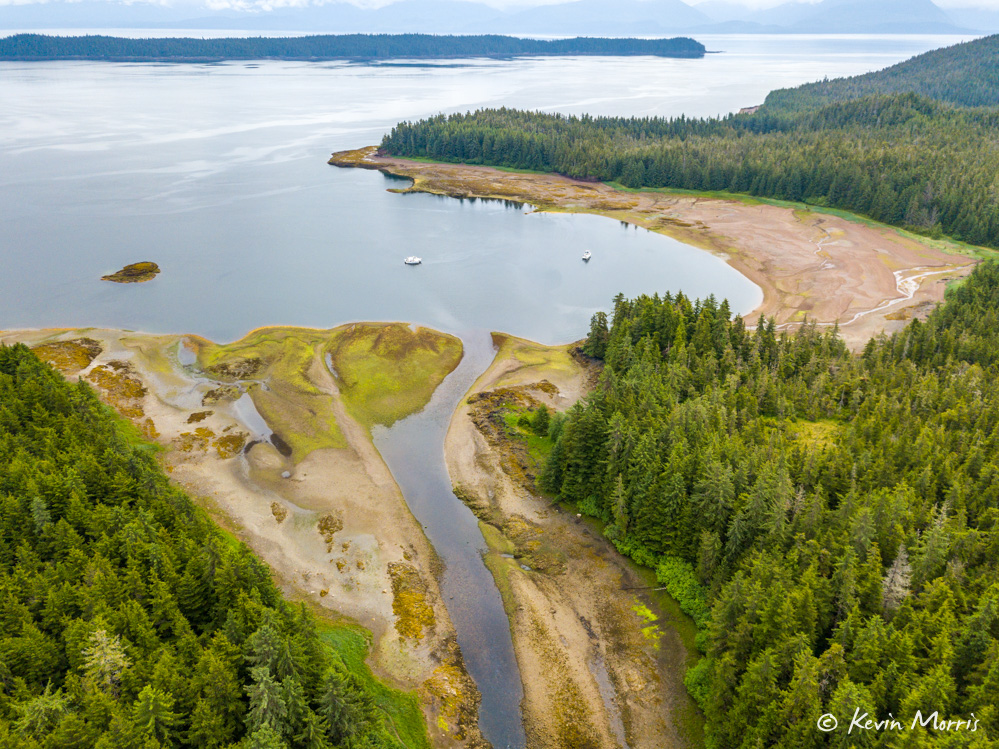 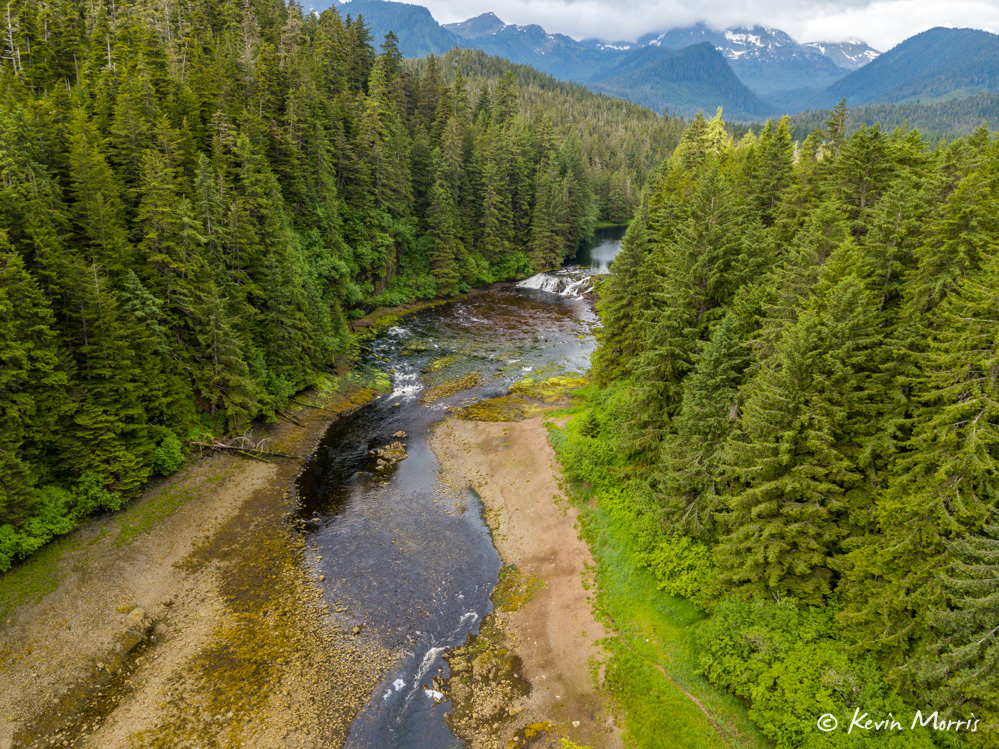