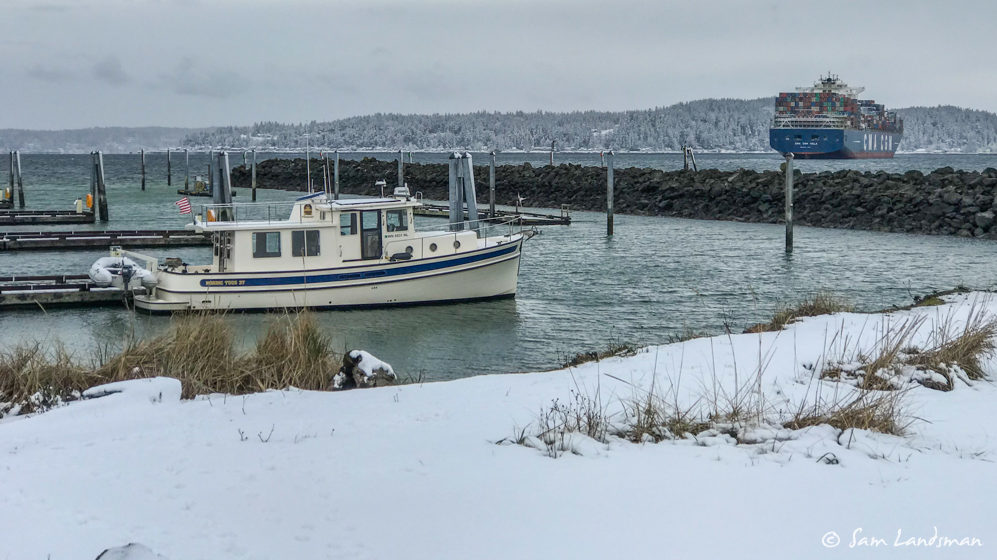 With Seattle in chaos and normal obligations cancelled because of snow in the forecast, we sought refuge on the water. What better place to spend the blizzard than Blake Island, we thought. So on Friday, after doing battle with every other Seattleite at the grocery store (50 minute line at Trader Joe’s!) we cast off. The locks, unlike the grocery store, were deserted—no waiting on a snow day!

By mid-afternoon we were across the traffic lanes and steaming south off Bainbridge Island in heavy snow. Visibility was limited, but traffic was light. When we arrived at Blake, the marina was nearly empty, so we tied up at our favorite spot (all the way in, view of Mt. Rainier if it’s out!) and watched the snow start accumulating on shore. 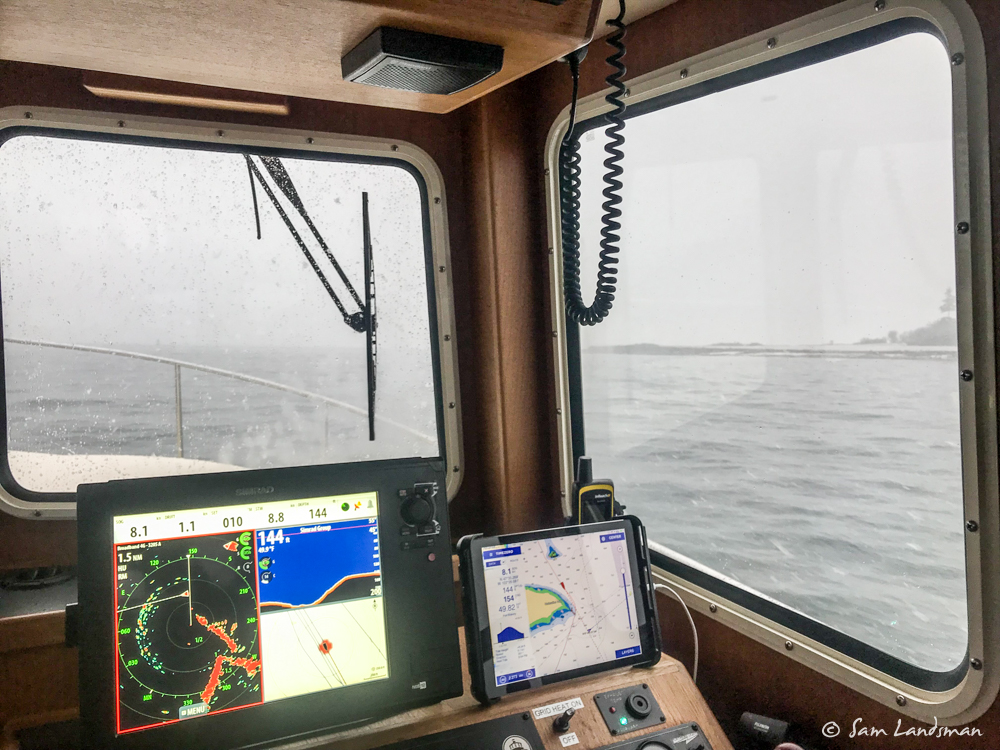 Around 3:00 a.m. the wind started. I’d seen the forecast for 25-35 knot northerlies and figured the marina at Blake would be well sheltered. It wasn’t. We saw 25-knot sustained winds with gusts into the mid-30s. Unfortunately, they were more northeast than north, and the waves rolled into the marina causing the boat to roll uncomfortably at the dock. The wind was blowing us off the dock, keeping the lines tight, and the taut dock lines snapped the boat to attention several times each minute. No combination of slackening lines or adding additional spring lines (7 total!) improved comfort aboard.

At dawn, we finally got a glimpse of the snow. There wasn’t much on the docks—just a dusting, really—not what we’d been promised! After a few minutes of observation we realized why: the waves rolling through the marina splashed onto the dock, melting any snow that fell. 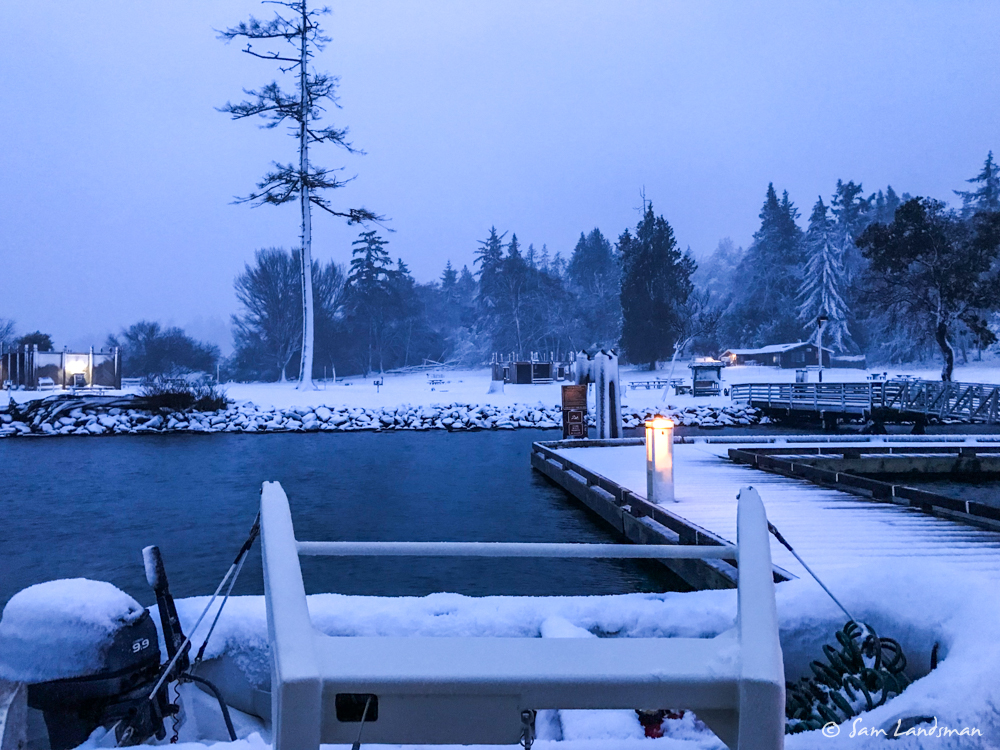 Wind-blown icicles formed on the boat as snow melted off the salon roof. 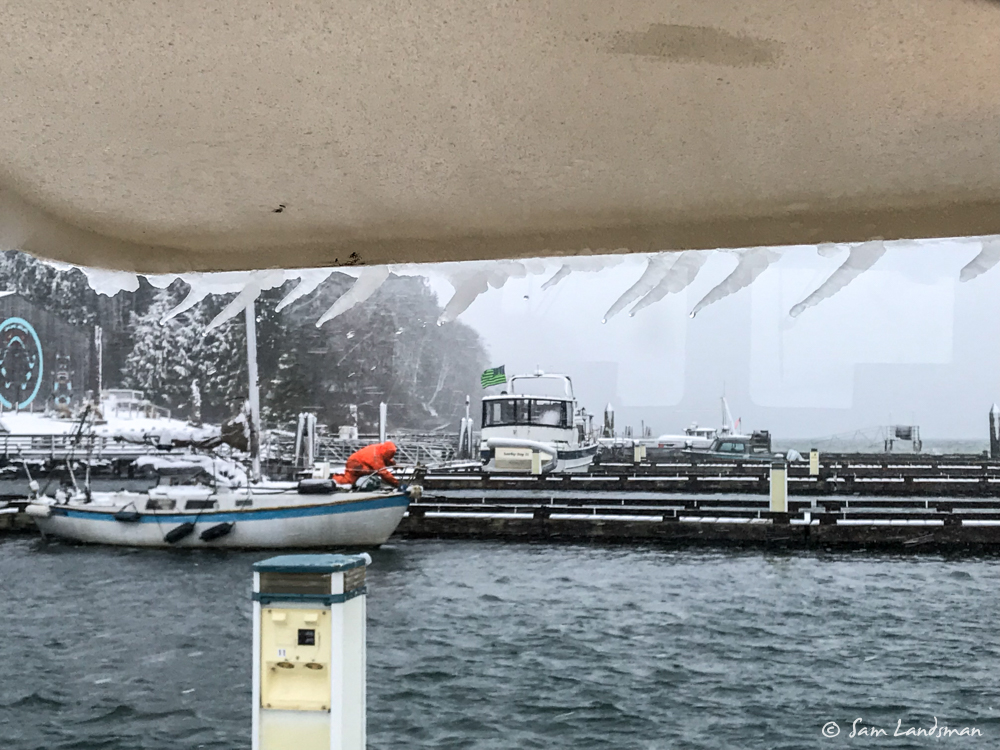 On shore, the snow was deeper, at least six inches in most places. We made a snowman and wandered the trails. 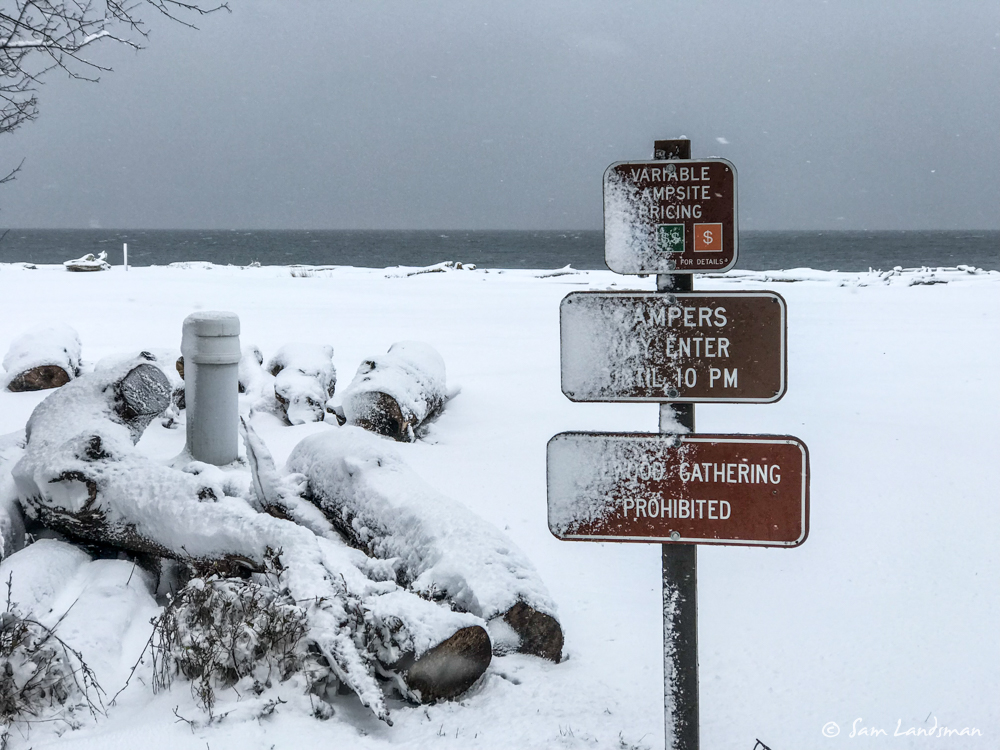 The strong wind caused snow drifts in places, a rare sight in the coastal Pacific Northwest! 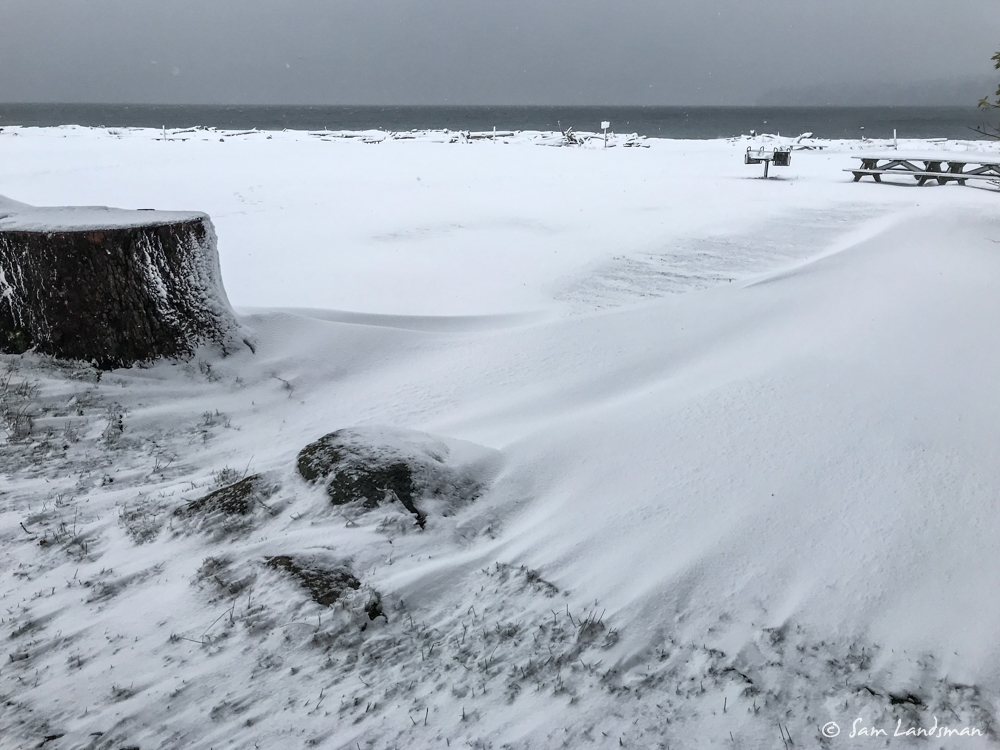 Away from the north shore, the wind was less and the snow deeper. We made first tracks! 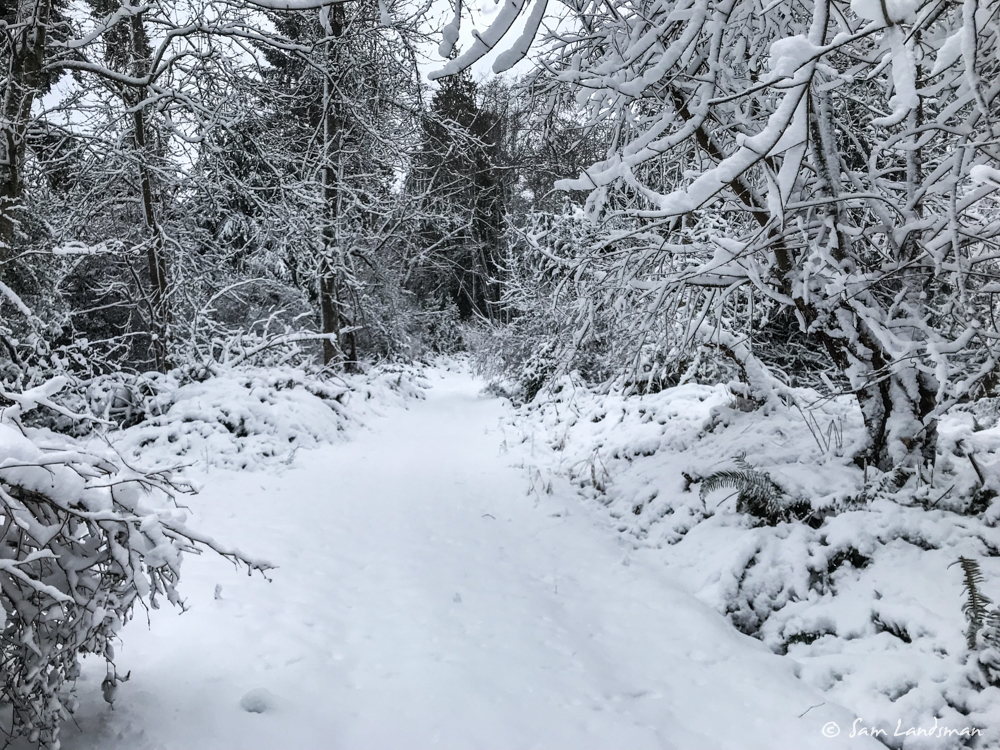 The deer (and raccoons) seemed undeterred by the snow. 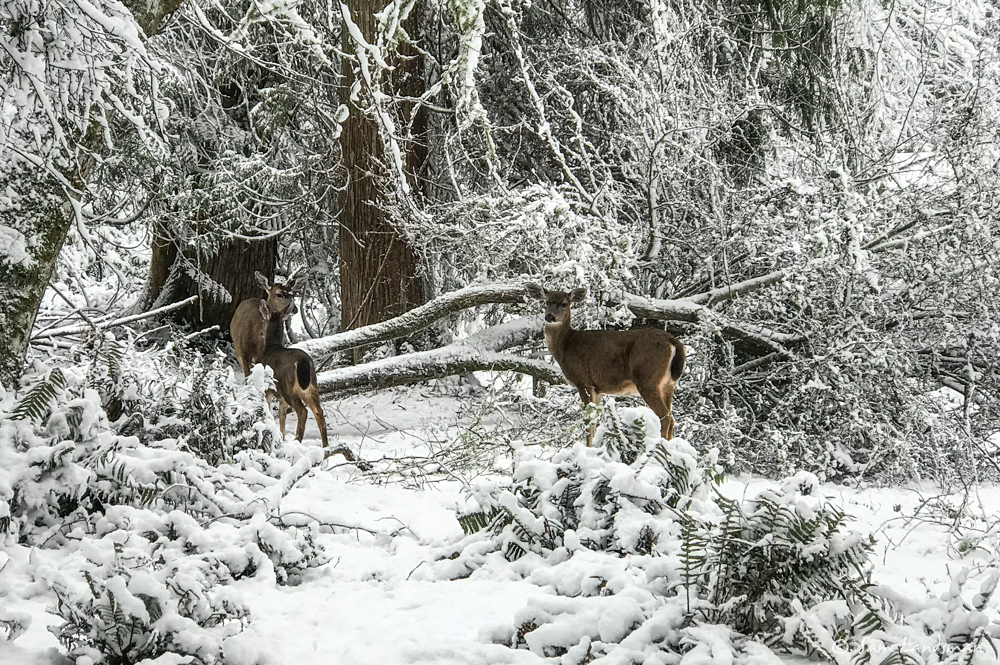 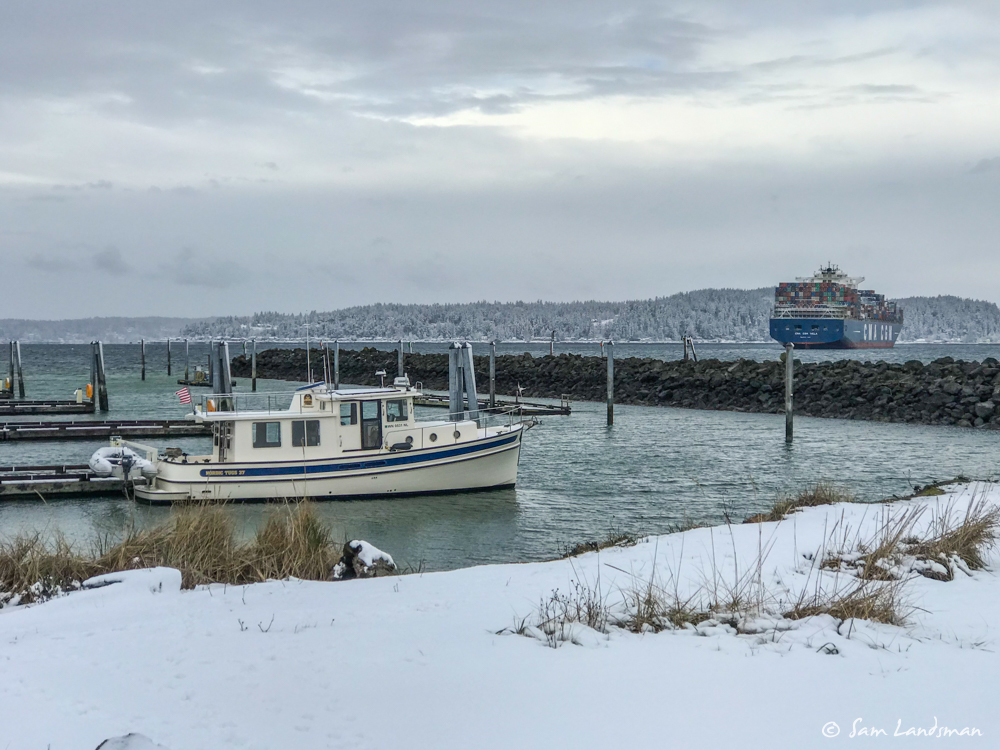 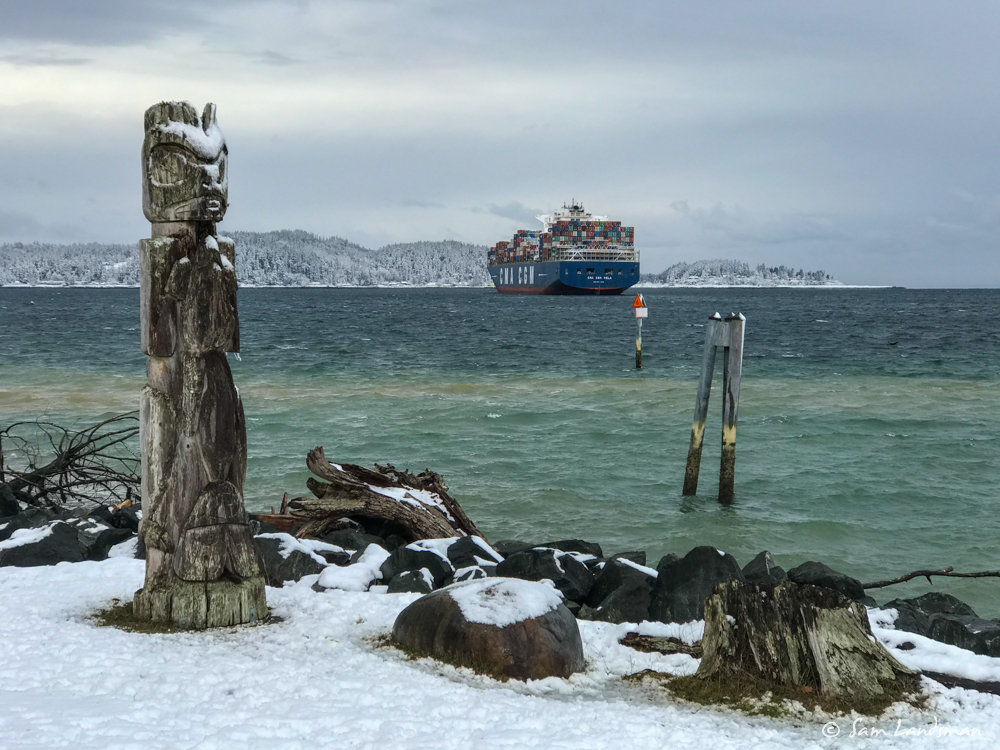 The wind never abated and temperatures never rose above freezing on Saturday. Even with 2500 watts of electric heat running, the furnace got a workout. I’ve often complained that the furnace in this boat is too big—it rarely has to run more than 20 minutes at a time in our typical weather—but on days like this, it’s nice to have plenty of heat!

By evening the clouds were gone and we glimpsed the Olympics . Magical!

After another rolly night, the wind finally died on Sunday morning. We planned our escape, but were temporarily foiled by dock lines that were frozen solid. After a liberal application of hot water to unfreeze the lines, we headed for Eagle Harbor.

Mooring on Bainbridge Island brought another challenge: finding the cleats! Without all the wind, the docks in Eagle Harbor were covered in more than six inches of snow, completely obscuring the cleats. After digging around with a (thankfully) gloved hand, I eventually found the cleats and secured the boat. A small snow shovel would be useful for winter cruising!

Then, a calamity: the furnace stopped. Safe Harbour has 30-amp shore power service, enough power to run about 2500-3000 watts of electric heat. This keeps the inside plenty warm most of the time, but not when it’s in the 20s outside. When the furnace switched on, it pumped fuel into the combustion chamber, but it wouldn’t ignite. After a few failed start-up attempts, it finally reignited, belching a cloud of dark, acrid smoke out the exhaust. Not good. This cycle repeated several more times before I convinced myself it was time to dig deeper or I’d be sleeping in the cold.

The symptoms seemed like a failing (or fouled) glow plug, so I opened up the furnace, pulled the old glow plug out, and installed a new one. Smoke free ignition! Heat! A problem fixed entirely with supplies onboard, and on the first attempt no less!

On Monday, it was time to return to Seattle. Anna had taken the ferry back from Bainbridge, so I was alone through the locks. No big deal, usually. I’ve been through alone dozens of times and it’s never a problem in the small lock. Today they put me in the big lock, right behind a 200 foot crab boat.

The challenge with the big lock is the bow and stern lines must be continually tended. When heading into the lake, that means pulling in the slack as the water rises. Failure to pull in the slack means the boat drifts uncontrollably as strong currents swirl around. With two people on board, this is easy: one person tends the bow line, the other the stern line. Alone, it’s a more complicated, with lots of trips between bow and stern to pull in slack. Thankfully, the lock attendant saw my plight and tended the bow line for me. The transit turned out to be remarkably easy, until departure.

Lake line last is the rule when departing the locks. This keeps the boat controlled in strong currents that result from the water level equalizing when the locks open. Unfortunately, the lock attendant cast off my bow line first. Between the equalizing current and the propwash from the crabber ahead of me, the bow immediately swung away from the wall and the stern line became bar tight. The bow thruster slowed the swing—and impending disaster—but it simply wasn’t powerful enough. With the stern still secured to the lock wall and the bow rapidly heading for the gate behind me, I put the rudder hard over towards the wall and poured on the power. This brought the boat parallel to the lock wall again, but I was still stuck by the stern. I’m not sure if the line snapped or the lock attendants cut it, but a moment later the boat surged forward and I was free. The whole episode lasted maybe 15 seconds and caused no damage, but it was a good reminder: lake line last!