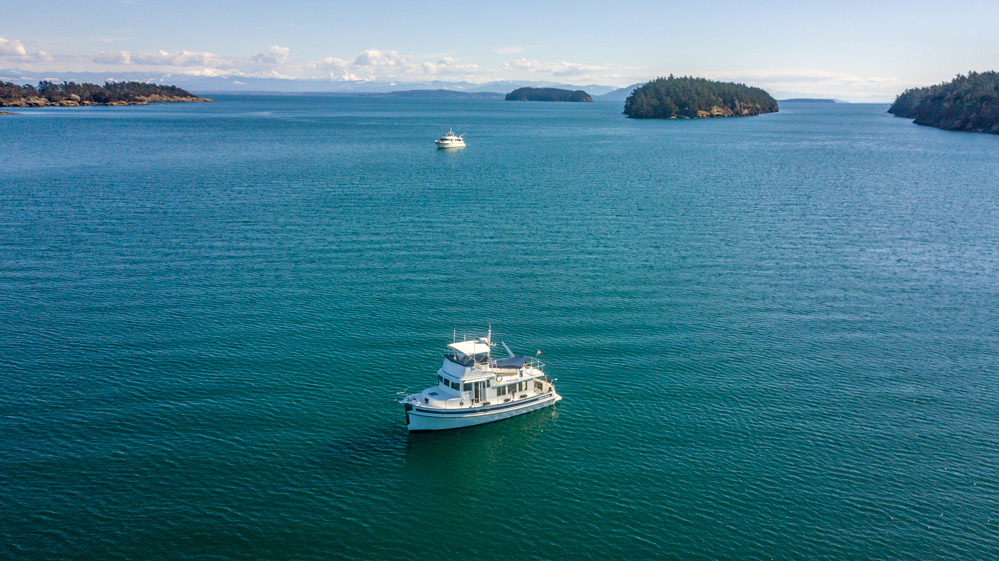 Kevin and I had a handful of boat projects to take care of on Airship last week, but as soon as we finished the projects that required we be at a dock (and near the hardware store and West Marine) we took off for a few days of winter cruising in the islands. We are seriously enjoying the extra space and livability this Nordic Tug 42 has over our NT34.

We were mostly interested in some quality time underway to continue to run the boat as much as possible before heading north for the summer, and since the weather was clear and beautiful we chose Echo Bay on Sucia Island for the distance from Anacortes (about 22nm), and for the view of the mountains.

Kevin took the drone up for a few aerial photos of our new boat. 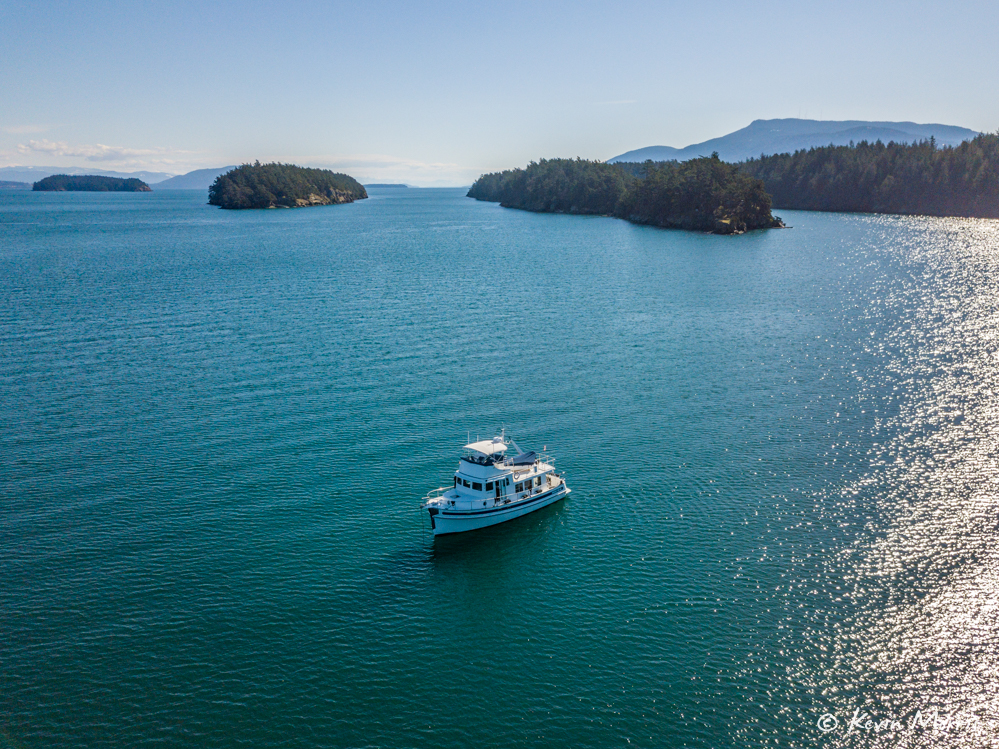 We cooked dinner while enjoying the pink sunset view: 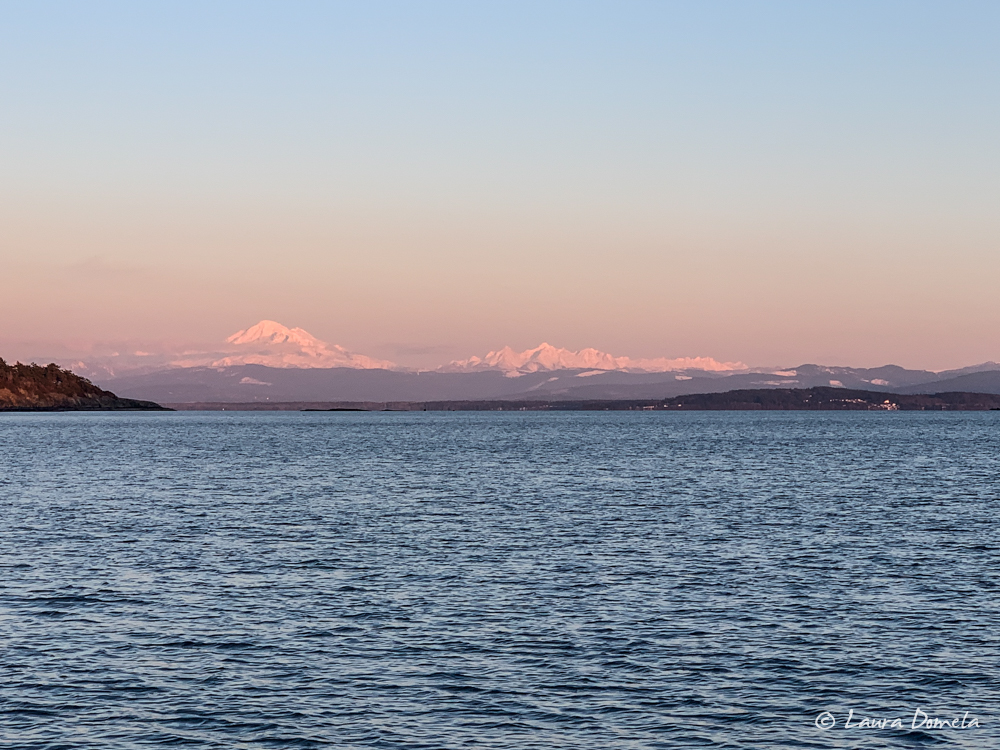 In the morning after breakfast, we cruised down to the south end of Lopez Island to an anchorage we hadn’t previously visited–Aleck Bay (~29nm cruise from Echo Bay, the long way). It was so beautiful out that we even drove from the flybridge for about half the cruise.

Aleck Bay on Lopez Island is a scenic anchorage and nicely protected from the northerlies. The sandy shore is dotted with cabins and homes, but the bay is spacious and has a great view out into the Strait of Juan de Fuca. (That’s Whidbey Island in the distance, below.)

The 25kt NE winds were predicted to continue, so we decided to cruise around the west side of Lopez and up toward Indian Cove and Picnic Cove on Shaw Island. We’d stayed in Indian Cove before, and Picnic Cove’s entrance was choked with crab pots, so we continued down to Spencer Spit to see if the west side of the anchorage near Frost Island would be protected enough to drop the hook for the night.

Spencer Spit really wasn’t a great option, so we went across to Thatcher on Blakely Island and anchored in about 16 feet. Thatcher is a shallow, spacious anchorage with a nice view out toward Lopez Island. The shoreline is private access only.

Our original plan was to head back to Anacortes on Sunday and drive home to Portland on Monday, but instead we opted to spend Sunday night at Eagle Harbor on Cypress Island, then head back to town Monday morning before driving home. (It’s only an hour cruise from Eagle Harbor to Cap Sante Marina.) Once in Rosario Strait, we had about a 2 foot chop and 15-20kt winds on Sunday. Not bad at all.

We grabbed a mooring ball at Eagle Harbor (first one from the new Nordic Tug 42). It’s quite a bit easier from the NT42…now we grab the ball from the swim step on the port side and walk it forward along the side deck with a protective railing the whole length (vs. hanging over the gunwale of the NT34 to loop the line through the ring and then walking it forward along the non-railed side deck, one hand holding on to the mooring line, the other grabbing along the upper deck rail along the way). It’s a little harder for me to see the mooring ball from the center helm while maneuvering, but using the headsets to communicate from the helm to the swim step makes things a bit easier.

Before we left the marina, we’d taken the Boston Whaler down off the top deck so we could charge the battery and take it out for a spin to make sure everything worked as it should. It ran great, was a smoother ride than expected in 1-2ft chop (22kts wide open!), but we’re still going to sell it. We’ve ordered an AB 11ft aluminum hull RIB with a 30hp outboard. The RIB will fit our flotilla/Alaska needs much more than the Whaler, so if you know anyone who might be in the market for a 2006 Boston Whaler 110 Sport in good shape with a 25hp Mercury (4 stroke, power tilt), canvas cover, downrigger mounts, and a Lowrance Elite 5 sonar/fishfinder, send ’em our way! 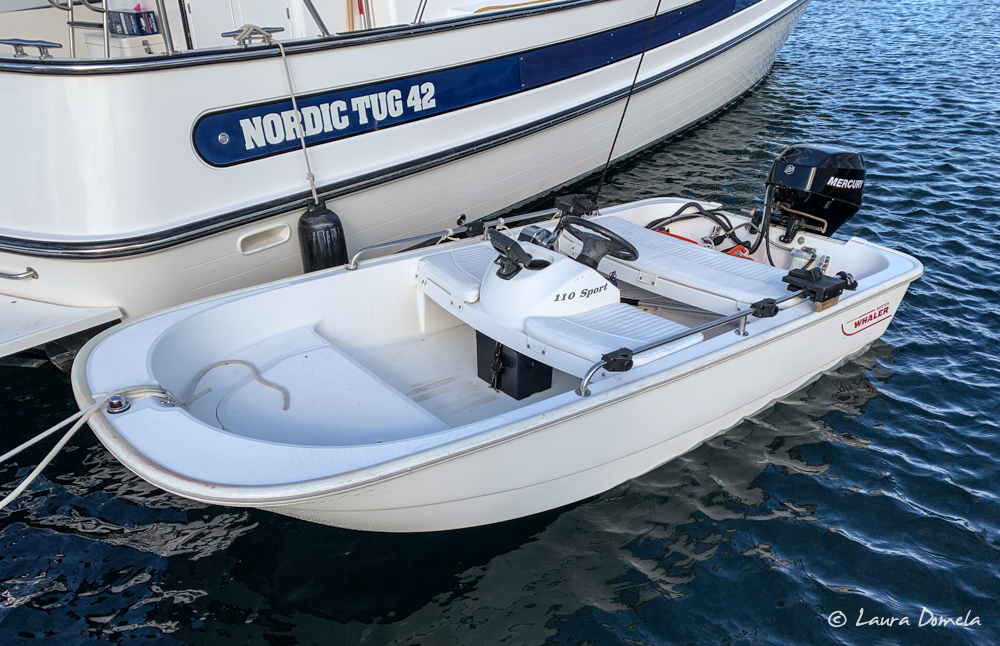 Here’s a link to the ad with specs and more photos.

Our new salon table is done and at the finisher’s now, and we expect to have it sometime later this month. The builder sent us a few preview photos and wow is it stunning!

We’re so excited to get this baby aboard!