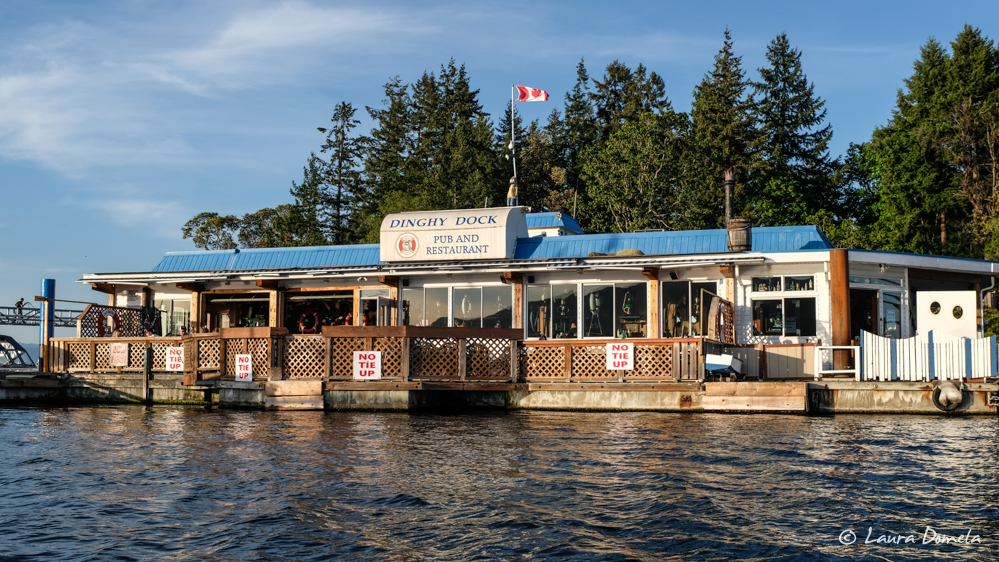 We’ve been patiently waiting for the Strait of Georgia to cooperate for several days now, and we’re finally ready to move into a position to seize the good weather that’s forecast for Thursday and Friday. Our plan is to put the Strait of Georgia behind us on Thursday, by running all the way from Nanaimo to Campbell River. Then, on Friday, we’ll (hopefully) hit the morning turn-to-ebb at Seymour Narrows and the predicted calm weather to ride the ebb current up Johnstone Strait and into the Broughtons.

Arriving in Nanaimo is dictated by transiting Dodd Narrows, just south of town. Tidal currents run to nine knots, and it’s best transited near slack. Today slack was at 1:05 p.m., so we didn’t have to leave Clam Bay until about 11:00 a.m.

An hour before departure, we noticed a sailboat that had been anchored behind us was suddenly aground on a rapidly falling tide. We hadn’t heard a distress call, but saw people aboard, so we dinghied over to see if we could provide any assistance. Apparently they were in the process of raising the anchor when it became tangled in their propeller. Without an engine or anchor, they were quickly blown ashore. By the time we arrived they were thoroughly grounded and there was nothing we (or they) could do but wait for professional assistance and a rising tide. 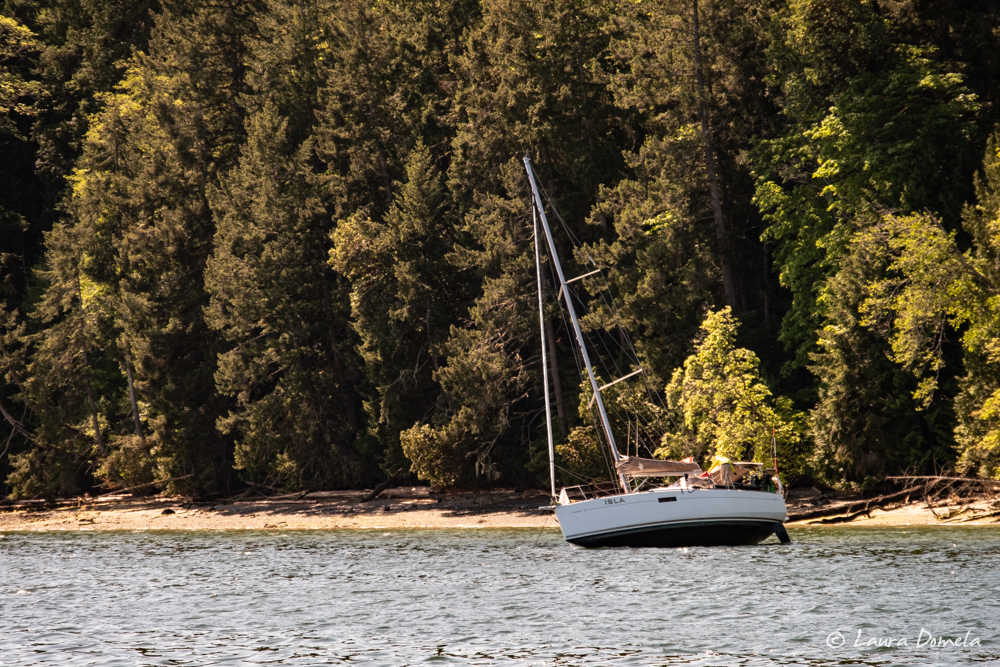 This incident was a good reminder that it’s better to call for help as soon as it might be necessary rather than waiting until it’s too late. Had they radioed for help—yelled, even—we (and likely others in the anchorage) would have rushed to their aid. We (or another Good Samaritan) likely would have been able to tow them by dinghy to an anchored boat, where they could raft up and safely dive on the running gear. We felt awful we couldn’t do more, and hope they escaped with minimal damage!

The trip up to Dodd Narrows was beautiful and uneventful. The northwesterly was gusting into the low 20s, but sea conditions in the protected Gulf Islands remained calm.

Dodd Narrows is a busy place near slack. Today there were pleasure boats transiting both ways, kayaks, and a log boom coming the opposite direction. It’s too narrow for larger traffic to pass comfortably, and it’s impossible to see all the way through, so large vessels make sécurité calls to notify conflicting traffic. For some crazy reason, these tugs towing log booms don’t transmit AIS. 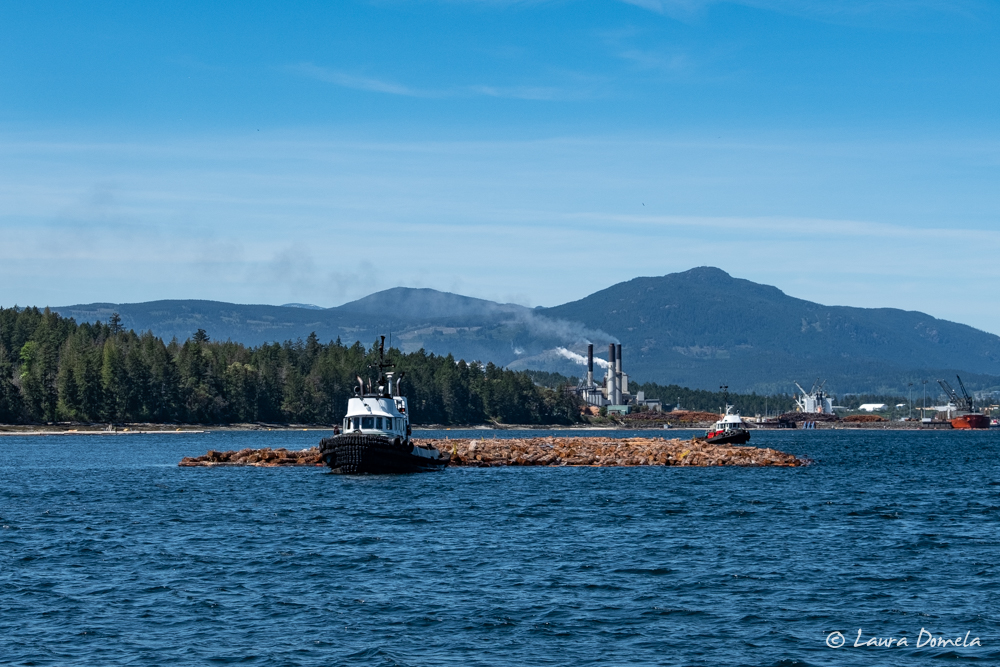 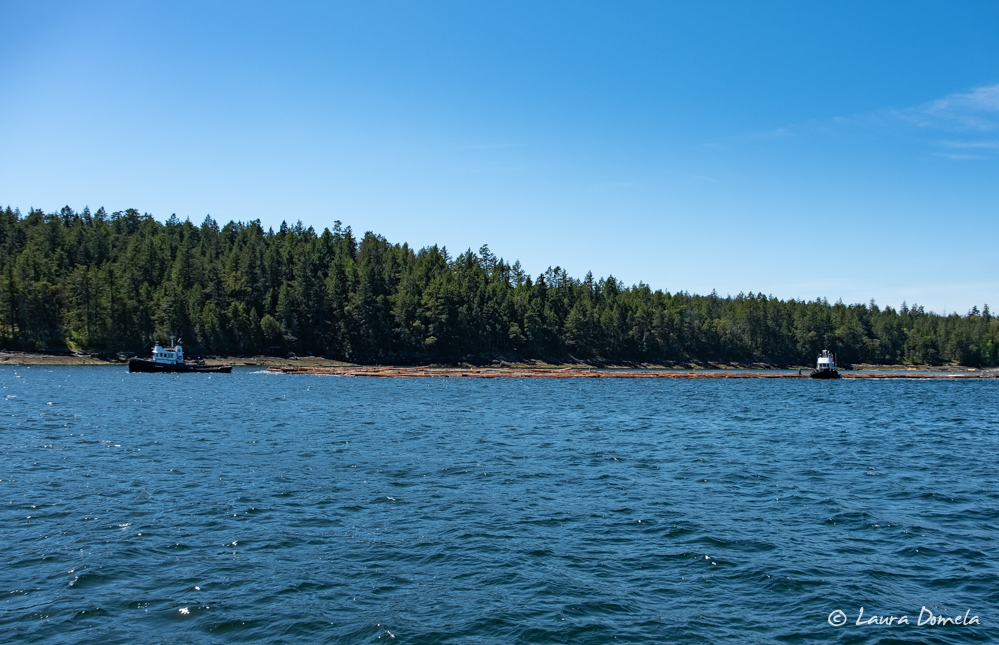 Here’s an example of the traffic and space: Airship and Nereus northbound, a sailboat waiting to head south, a kayak, and the tug and log boom. 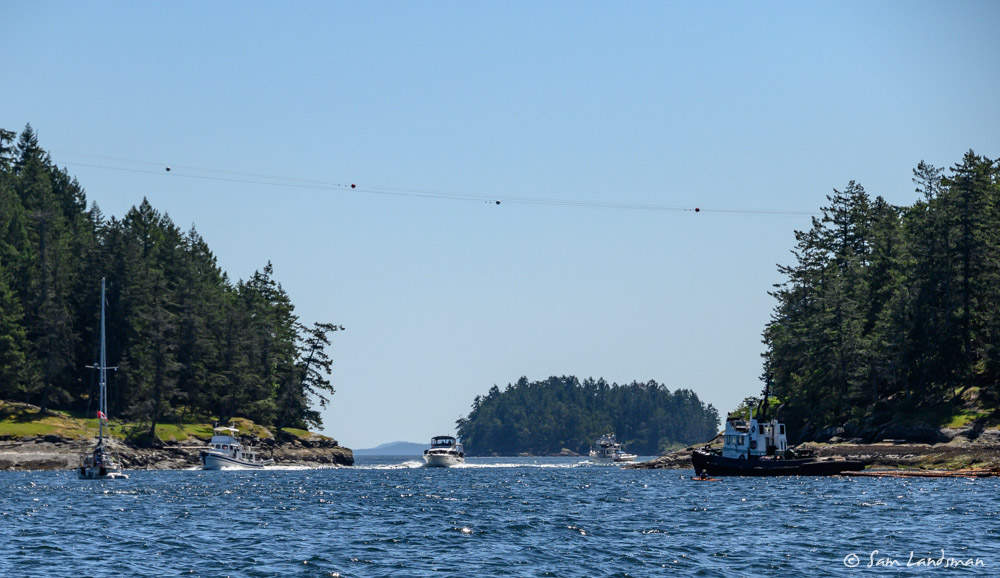 The last few miles into Nanaimo are a slog when the wind is blowing from the northwest, and today was no exception. Entrance Island was showing 3 foot moderate and winds gusting into the mid-20s, and that felt about right. The boats got plenty of salt spray, but the bumpiness was brief. 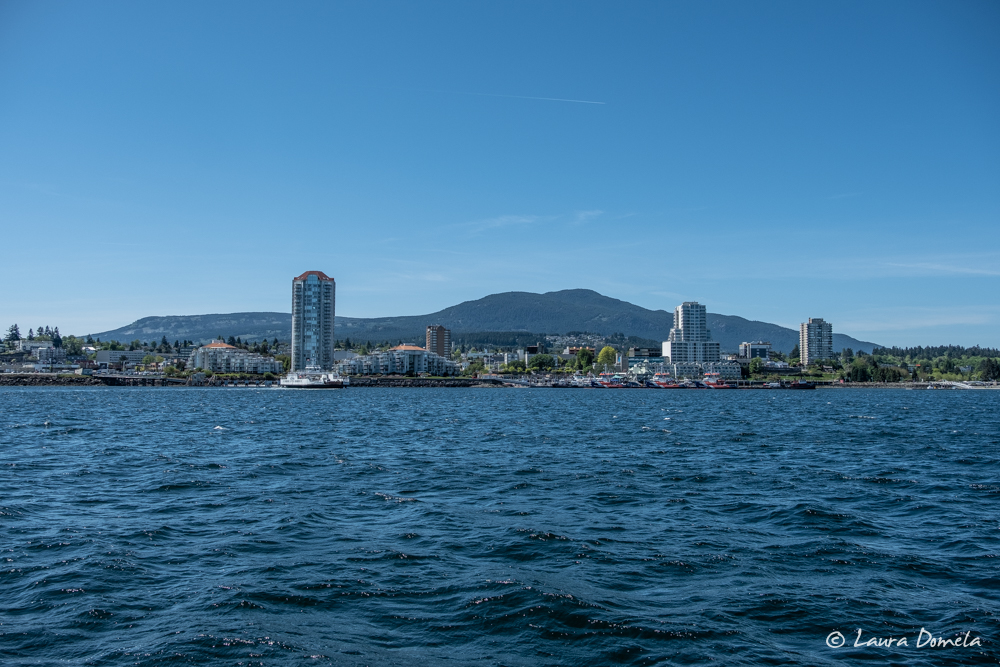 Since we aren’t in need of provisions or shoreside amenities, we headed for the Newcastle Island docks, where we all managed to squeeze in. 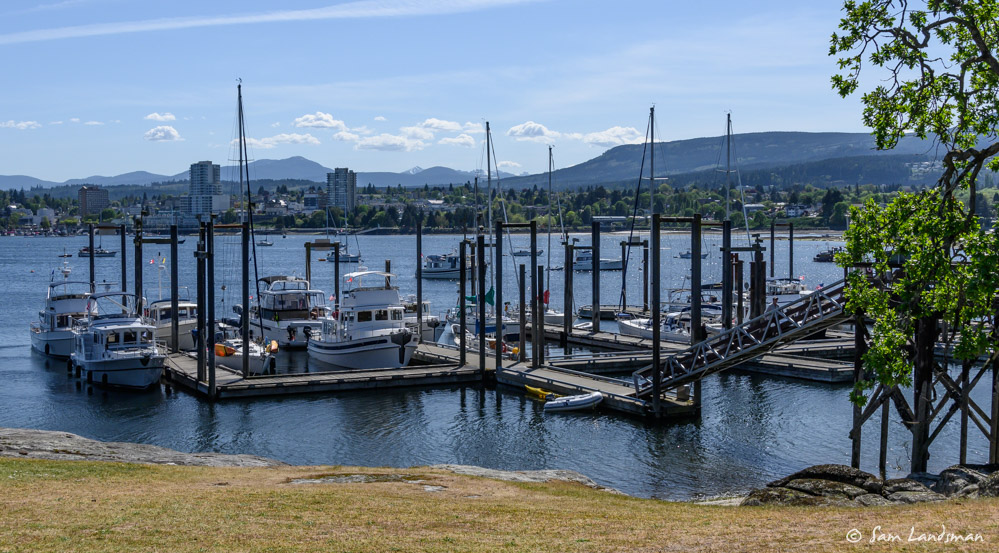 Newcastle Island is a large park, with docks, mooring buoys, hiking trails, campsites, and more. The views across the Strait of Georgia are breathtaking. 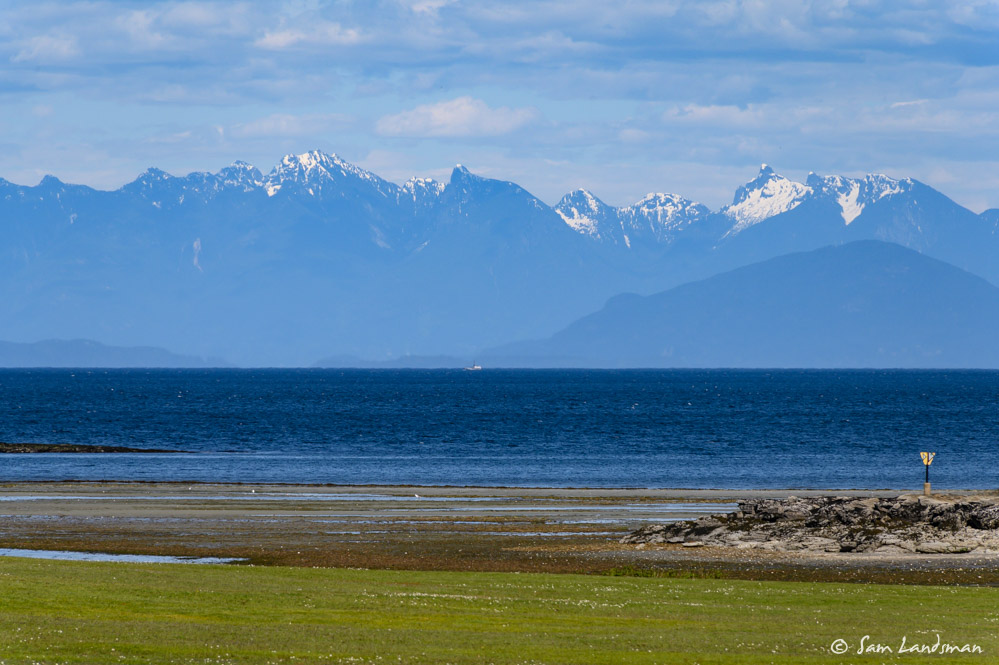 Before dinner, we had the group over to analyze the weather for the next few days. We went through the process of synthesizing the Environment Canada and Windy forecasts, plus lightstation, buoy, and automated weather station reports into something useful. 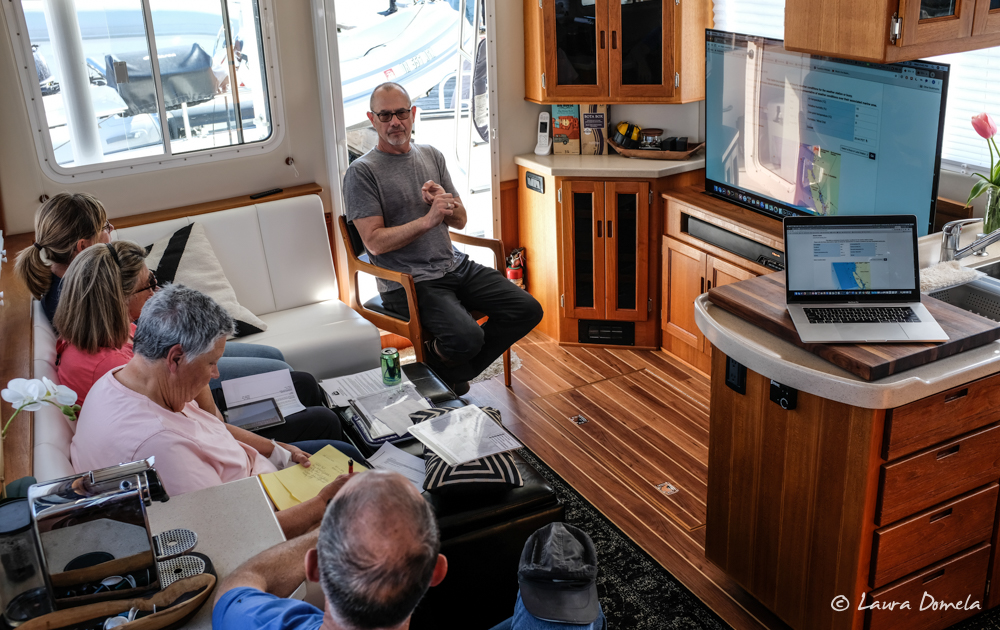 Then we piled in the dinghies and headed across to the Dinghy Dock Pub for an early dinner. 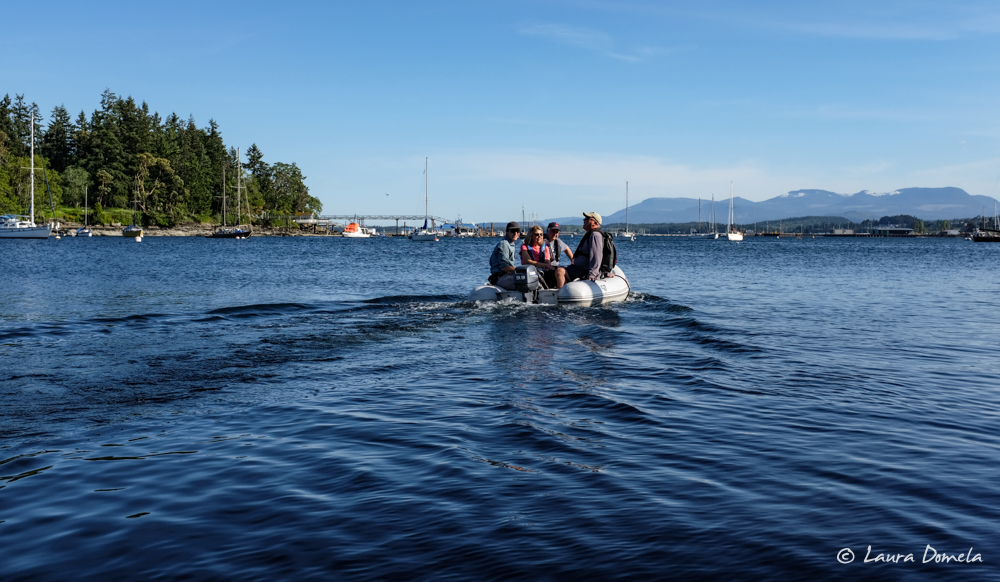 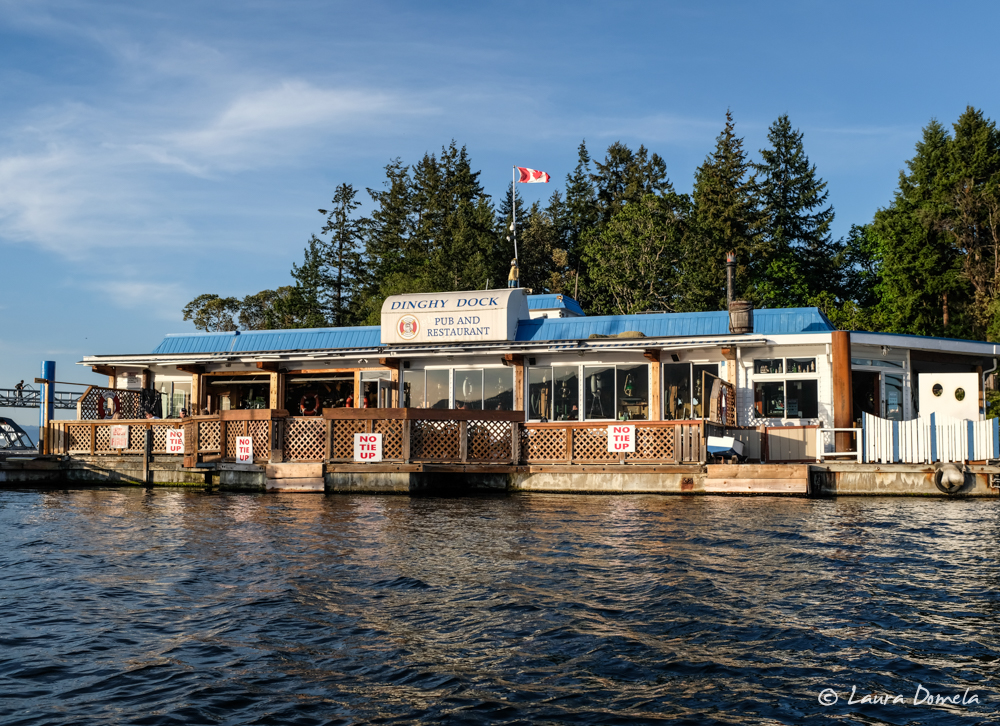 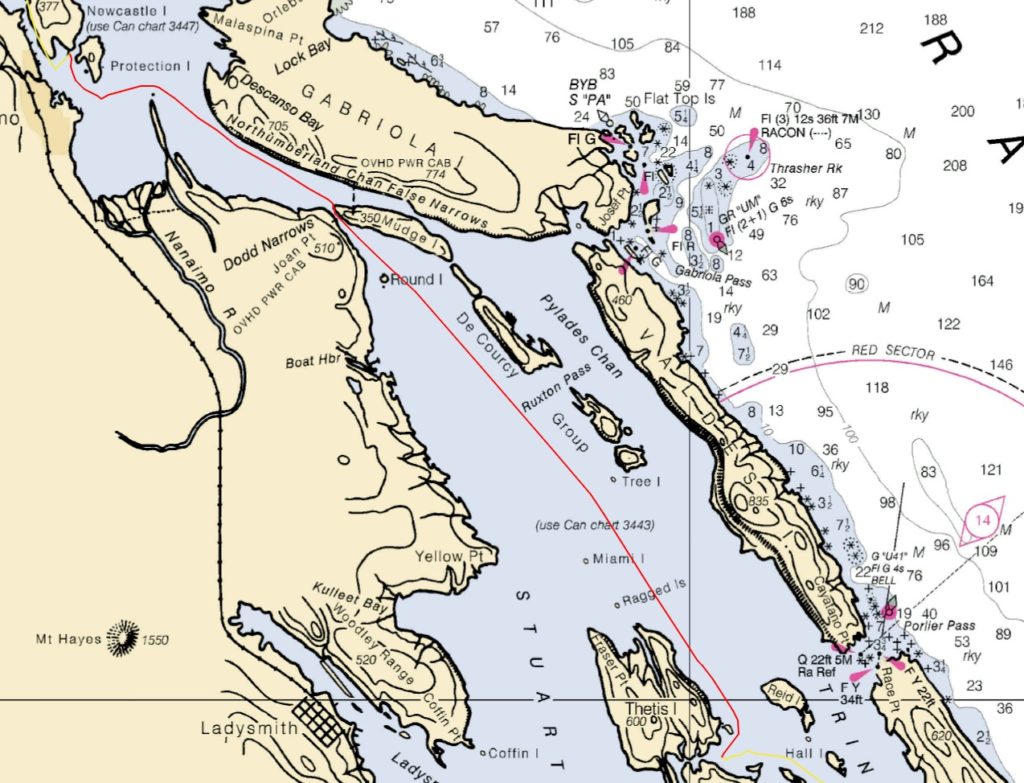