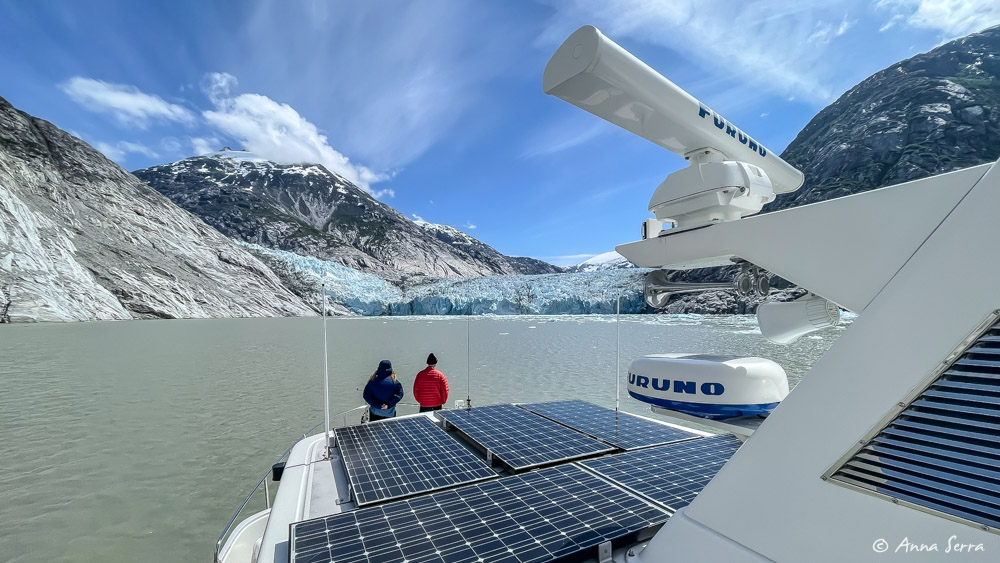 A few hours after we got to Auke Bay, two more friends arrived: Erika, who we went to college with, and Josh, her partner. The next day, with six of us aboard Akeeva, we headed to Endicott Arm, Dawes Glacier, and Ford’s Terror. Even after 15-plus visits, this little section of Alaska delights. The combination of moderate travel distances, protected water, magnificent fjord scenery, wildlife, solitude, and a tidewater glacier have me bringing friends and family back over and over again.

Our first stop was Tracy Arm Cove. Visitors bring with them a new sense of wonder about Alaska: they want to take a picture of the first iceberg they see (it’s faaaaaaarrrrrr away), bald eagles and seals are fascinating, every waterfall gets a mention. After spending some time here, we get a little more selective about what excites us. Guests help remind us just how special and dramatic this place is.

We launched the dinghy as soon as we arrived at Tracy Arm Cove. We visited icebergs, collected ice for cocktails, and explored the shoreline a bit, but mostly spent the day catching up with each other. Between geography (Emmy and Patrick live in Denver, Erika and Josh in Berlin), COVID, and job obligations it had been far too long since we’d all gathered. We were having such a nice time that I forgot to take pictures.

The next day we first went to Dawes Glacier, then to Ford’s Terror. At the Endicott Arm entrance bar, there was much less ice than when we visited a few weeks ago with the flotilla. And despite the rainy-looking weather forecast, the clouds lifted, we got a bit of sunshine, and the wind was light. As we motored up Endicott Arm the ice never really thickened, and other than a few moments of maneuvering, I never even had to pull the throttle back. 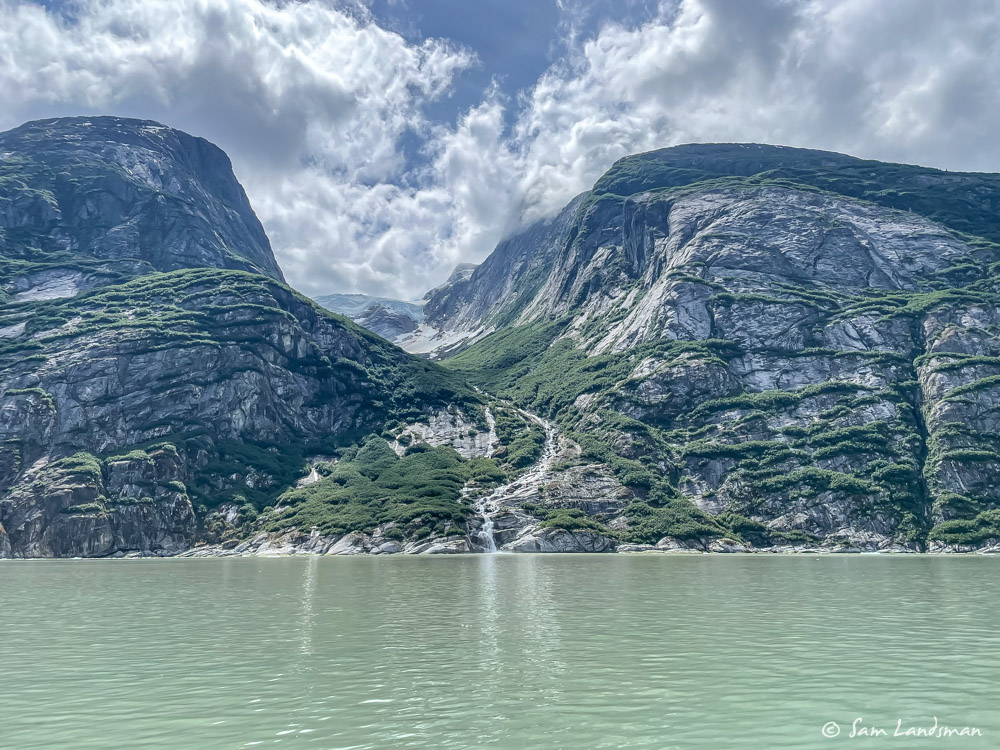 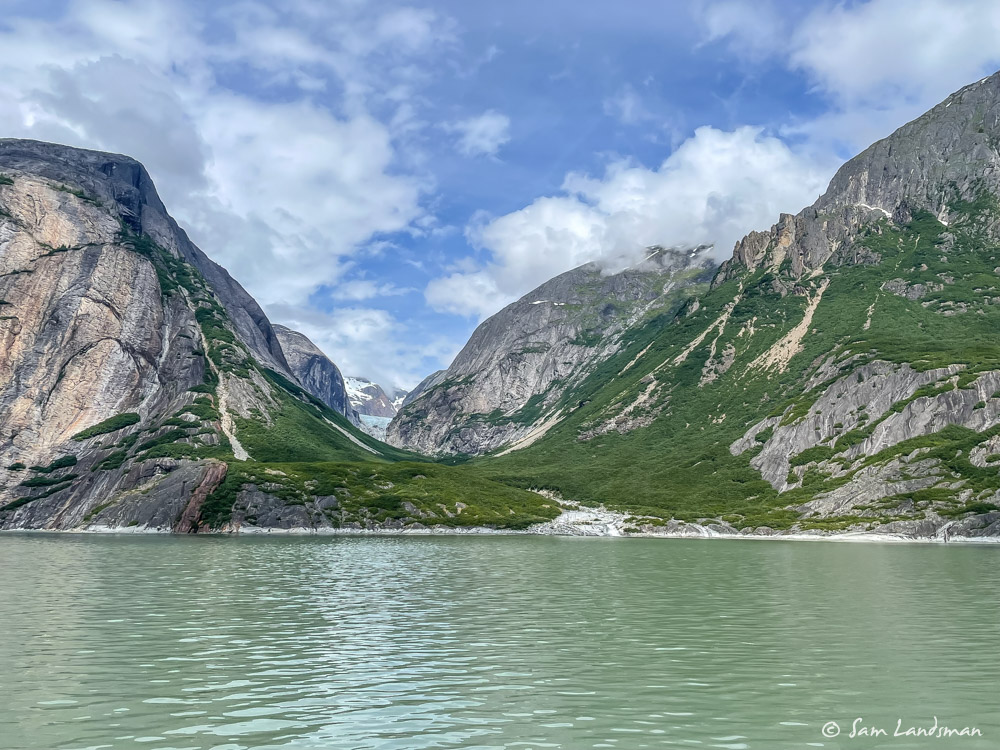 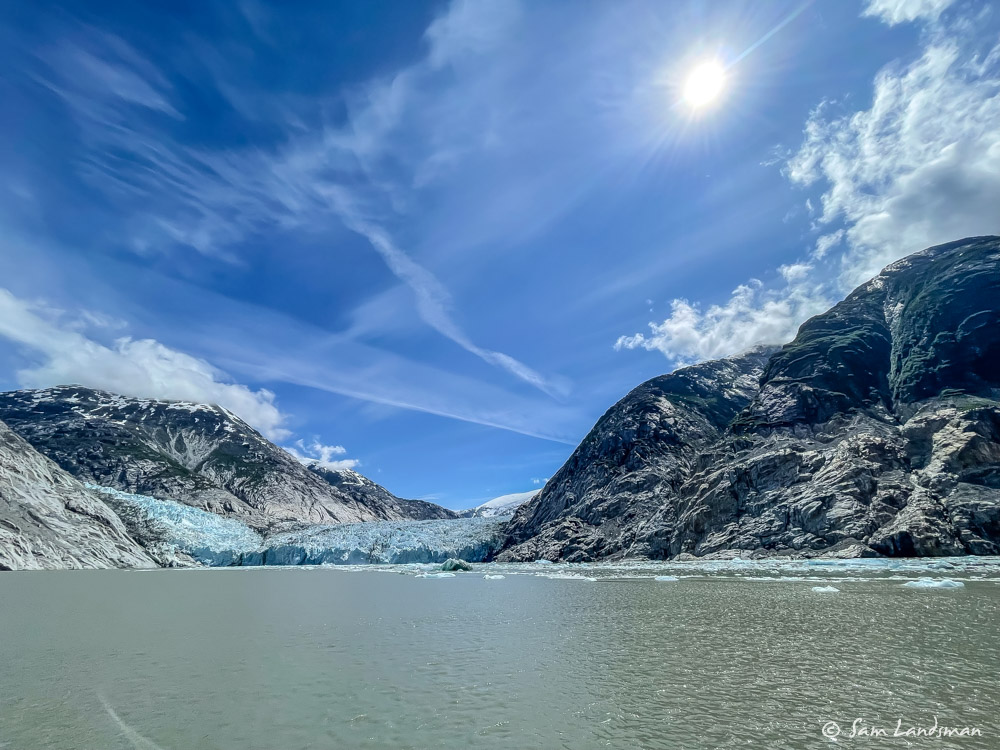 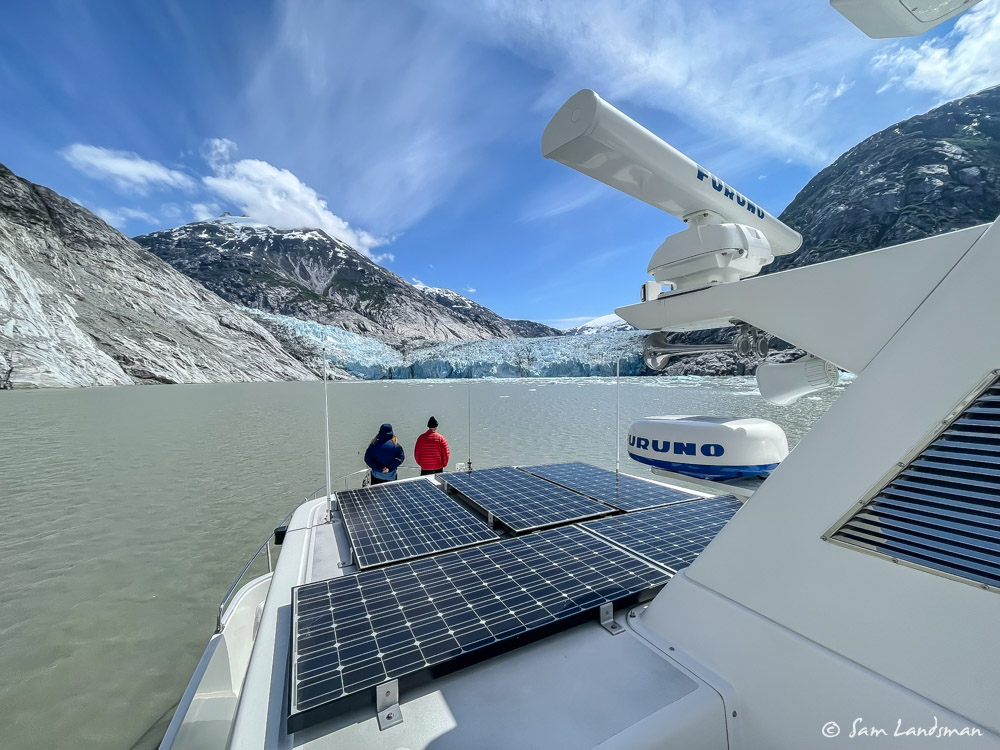 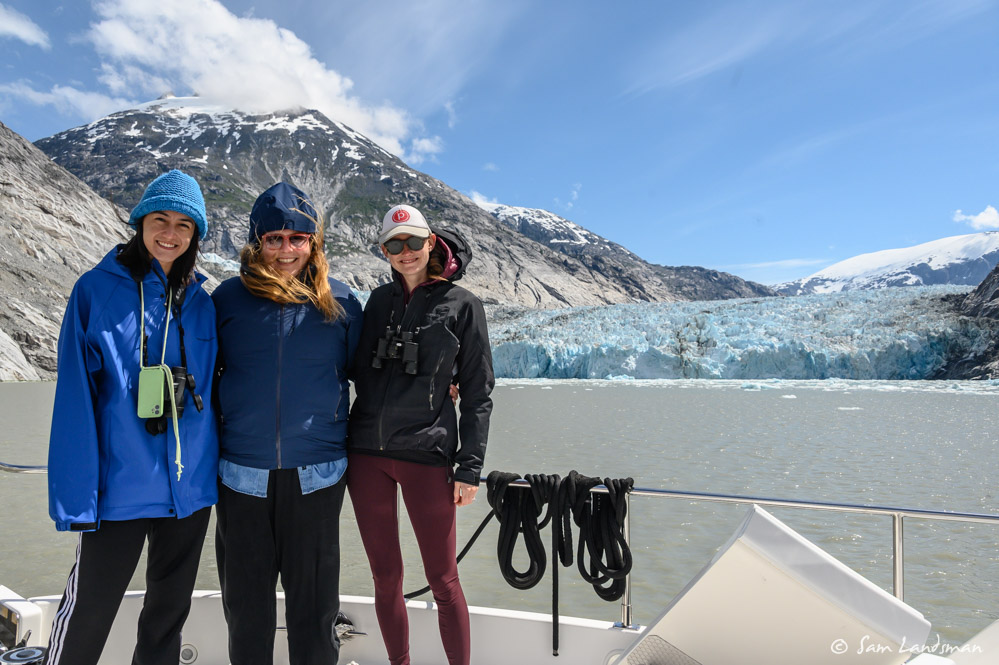 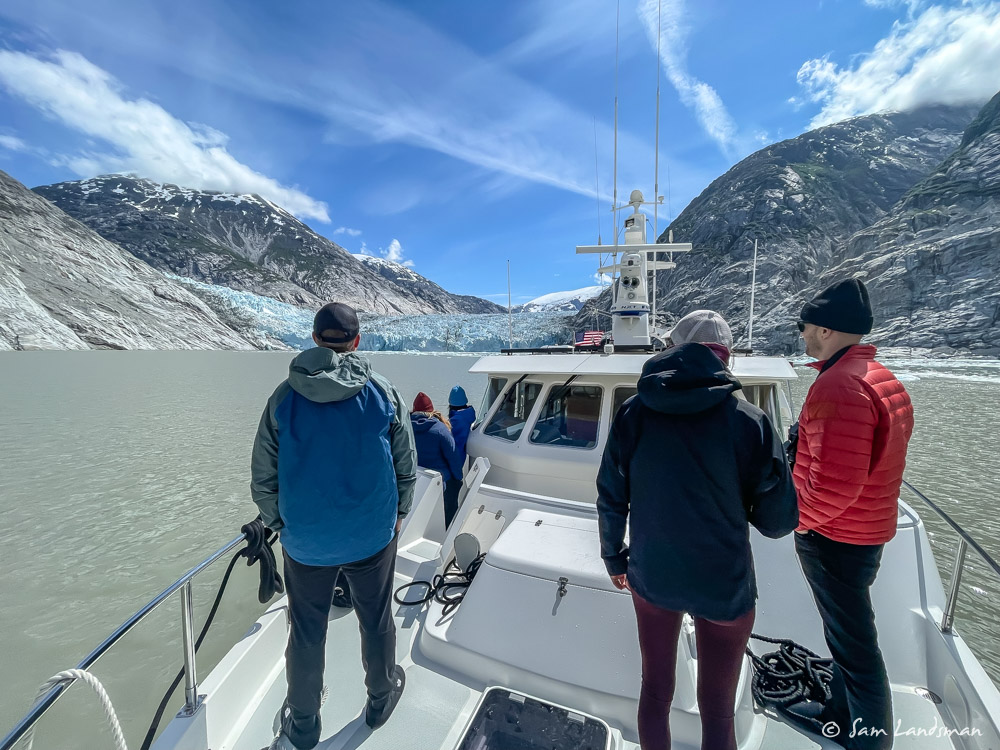 That was a good thing, too, since Endicott Arm is a little longer than in years past. Three-quarters of a mile from the glacier face, and a mile further into Endicott Arm than I’d been before, we shut down the engine. The next 30 minutes drifting, listening to the glacier, and marveling at the scenery were perfect.

We spent a relaxing two nights in Ford’s Terror, exploring by dinghy, kayaking, visiting with friends. We watched a mama bear and her cub (our first bears in weeks) wander along the shoreline and harbor porpoises swim around the boat. Food has been a big part of this trip, too. Josh is a professional chef, with experience at some of the top restaurants in the world. To say he’s elevated our cuisine is an understatement!

Too quickly, we had to leave Ford’s Terror. One other boat arrived on our second day, and they left with us. Another boat was waiting to enter after we left, and one of the Uncruise boats was anchored outside the rapids and tendering people in. Ford’s Terror has certainly gotten busier over the years, but it’s not exactly busy as our city-dwelling friends pointed out.

Because of the tide, we couldn’t leave Ford’s Terror until after 3:00 pm., and we needed to be in Juneau by 10:00 a.m. the following morning for Emmy and Patrick to catch a flight. We figured we could make it to Taku Harbor before dark, then leave by 7:00 a.m. and still get to Juneau with time to spare. The plan worked just fine, but Taku Harbor was packed. No space on either dock, and dozens of anchored boats. Still, plenty of room for us to anchor. The next day, Juneau was busy, too: the harbormaster initially said the only option was Douglass, but thankfully we found space on the transient floats in Harris Harbor.

We spent the day in Juneau catching up on chores and provisioning before embarking on our most ambitious cruise yet: crossing the Gulf of Alaska to Prince William Sound.