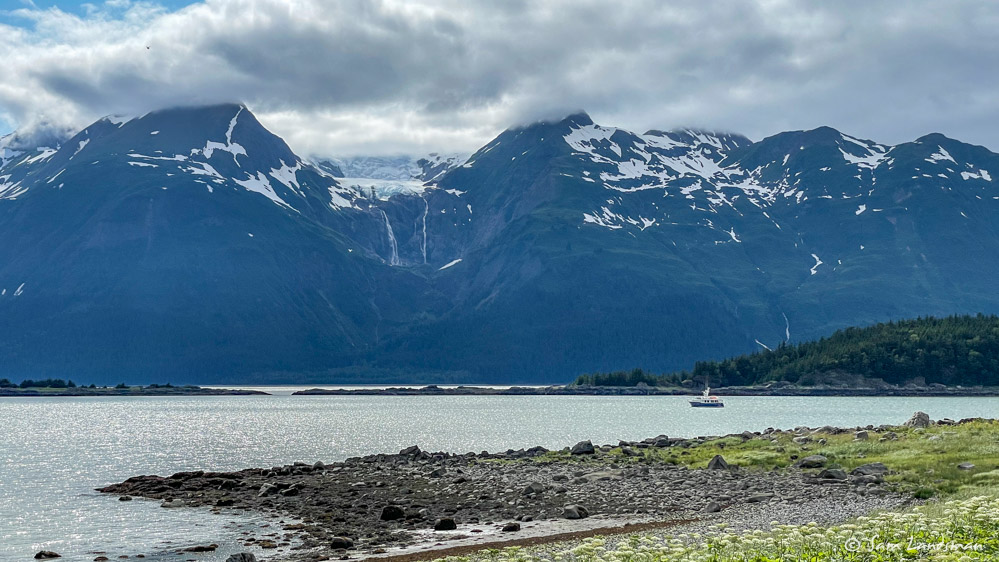 The flotilla might be over, but our cruising isn’t. The day after the flotilla concluded, friends arrived in Juneau, and the next day we set off for Skagway.

Skagway is the first destination of what we hope will be a year of adventure on Akeeva. The plan is to explore Alaska this summer, including (hopefully) Prince William Sound, then work our way south along the Pacific Coast in the fall. We’ll spend the winter cruising Mexico and perhaps further into Central America. It’s all very exciting, surreal, and a bit nerve-racking!

But back to the last week and a half…

My first preference was to go to Glacier Bay, but the permit process proved too difficult. Even with dozens of calls (all unanswered) and emailing the short-notice permit application at precisley 8:00 a.m., we missed out on available permits.

A side note on Glacier Bay permits: they don’t seem to be responding as quickly to permit applications as they did in the past. We applied at 8:00 a.m. and didn’t hear back until after noon. This makes it challenging to plan where to go without wasting the morning waiting to hear if you’ve gotten a permit.

So we chose Skagway, at the head of Lynn Canal. Lynn Canal is a 100nm long fjord known for brisk winds, choppy seas, and few anchorages. It’s not terribly popular with cruisers, but a few things attracted us. First, the forecast of warm, sunny, settled weather would allow us to see the mountains and glaciers while not getting beaten up. Second, there are no cruise ships in Southeast Alaska right now, and we were curious what Skagway was like without them. Normally Skagway, population 1000, hosts more than a million visitors annually, most from cruise ships. Finally, Skagway promised an epic Fourth of July celebration, and we couldn’t pass up the opportunity to spend a sunny Fourth of July in a small Alaskan town before it’s once again overrun with tourists.

We had two nights to get to Skagway and we stopped at two anchorages: William Henry Bay and Kochu Island.

William Henry Bay is a good anchorage, with tons of room in moderate depths, good holding, excellent protection from the south, and just a few other boats. We explored the rugged shoreline by dinghy, walked on the beaches, and enjoyed the scenery.

The next day we continued north. The mountains along Lynn Canal are particularly beautiful: steep, rugged, snow-covered, with many glaciers. 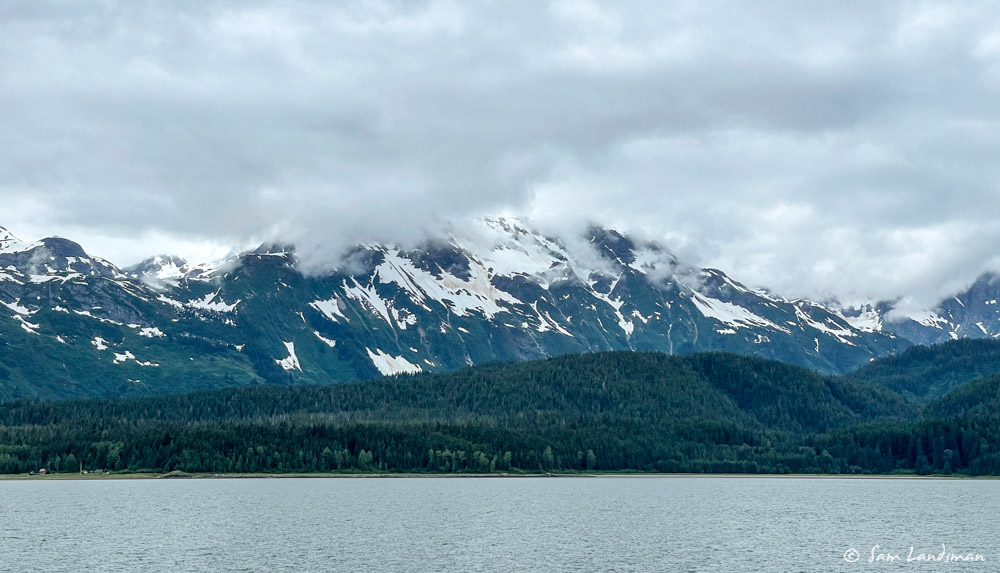 We’d read about a trail that led from the beach near Davidson Glacier to the glacier itself and were intrigued. Unfortunately, the anchorages nearby were untenable: too deep or too shallow, too many crab pots, too little shelter.

We continued deeper into Chilkat Inlet and eventually anchored between Kochu Island and Chilkat Peninsula. With light southerly winds we had a bit of chop, but nothing uncomfortable, and the views of Rainbow Glacier were breathtaking. We even had a group of porpoises visit us for 15 minutes. The downside: it’s accessible by road from Haines and some buildings are visible on shore. The upside: cell phone service is good and walking on shore is easy and pleasant at Chilkat State Park.

On the morning of the Fourth we headed for Skagway.

I’d been worried that the docks would be full with Fourth of July revelers, but the harbormaster assured me there would room. He was right: we found plenty of empty side-tie moorage and just three other cruising boats.

Skagway knows how to throw a Fourth of July celebration! An egg toss, tug-of-war, hot dog eating contest, and basketball tournament were just some of the activities. The joy in the atmosphere was palpable, perhaps because we’re finally emerging from the COVID nightmare, or maybe the sunny weather, or it might just always be like this, but it felt good to be back in a crowd of people having a good time.

We had a great visit to Skagway, but needed to head south to pick up more friends. After walking through town and getting breakfast on the morning of the 5th, we motored south. The weather was clear and the mountain views were incredible. 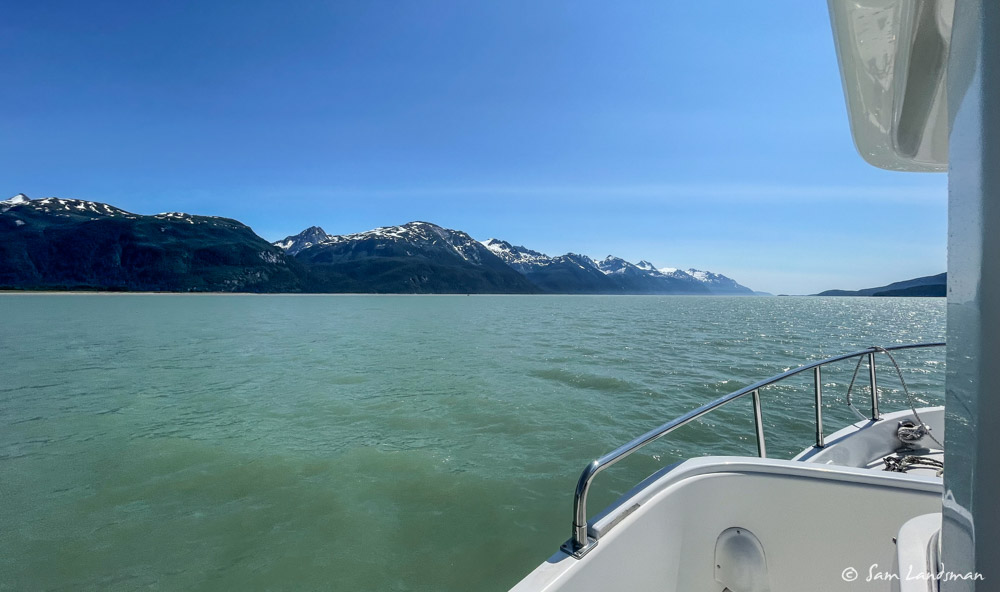 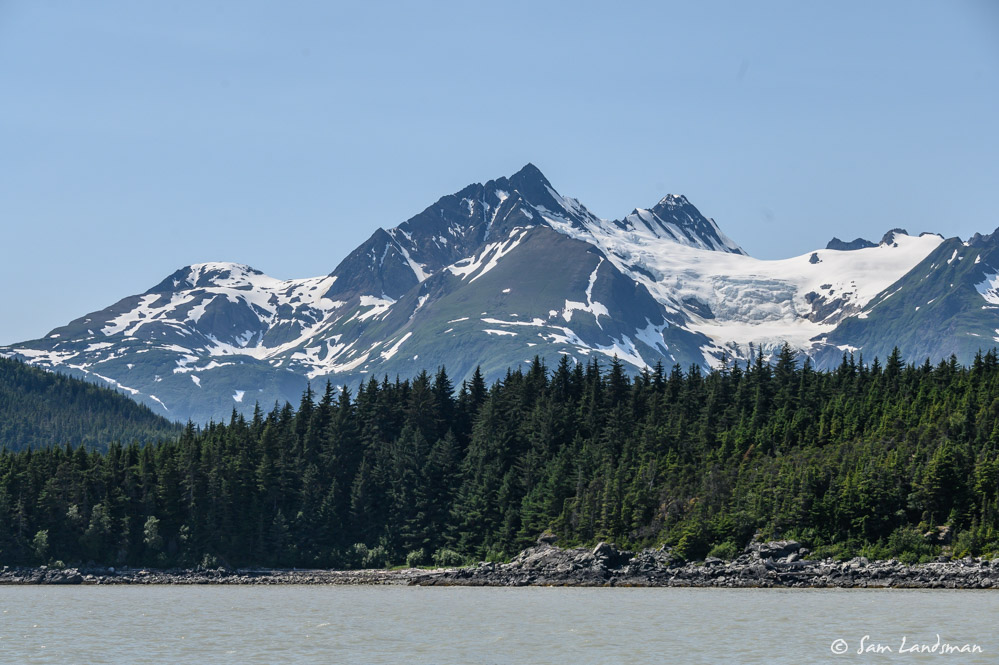 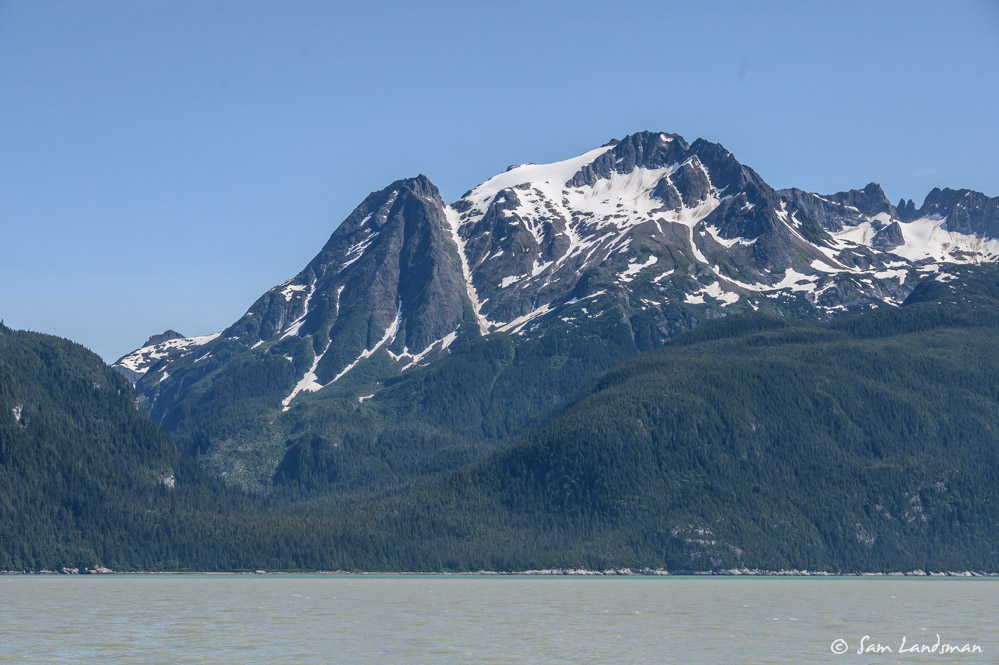 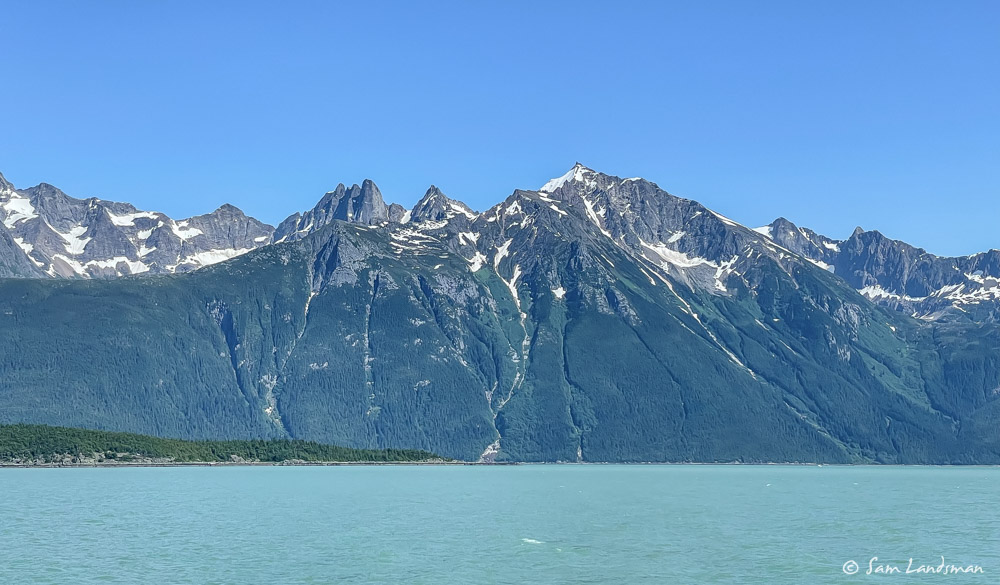 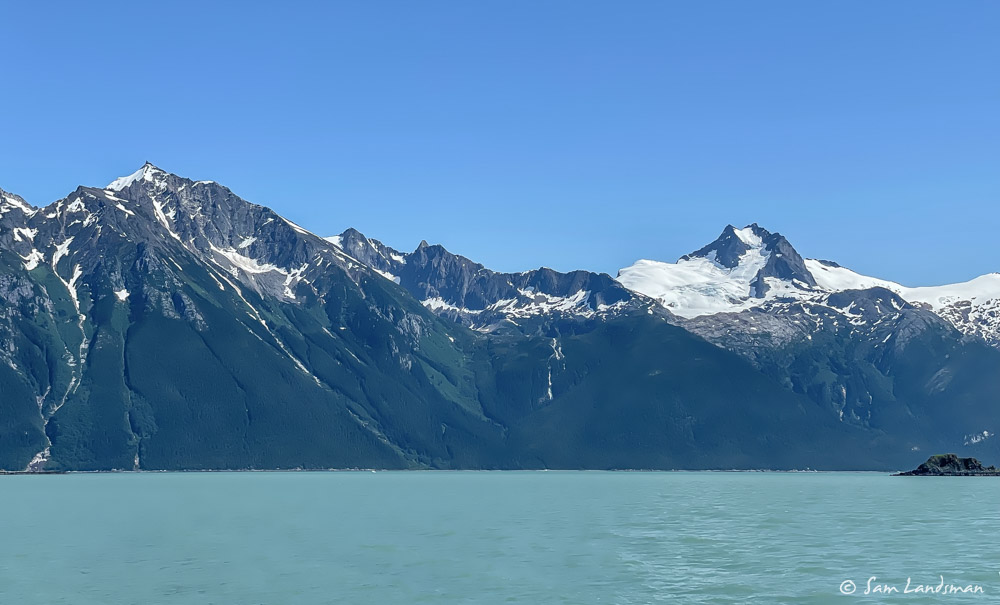 We anchored in Sullivan West Bight, just west of Sullivan Island. This is a scenic spot, with good holding and surprisingly good protection. Even with a 15 knot southerly blowing, we were very comfortable. Ashore there are a few structures, and since there was a skiff on the beach, we chose not to visit. 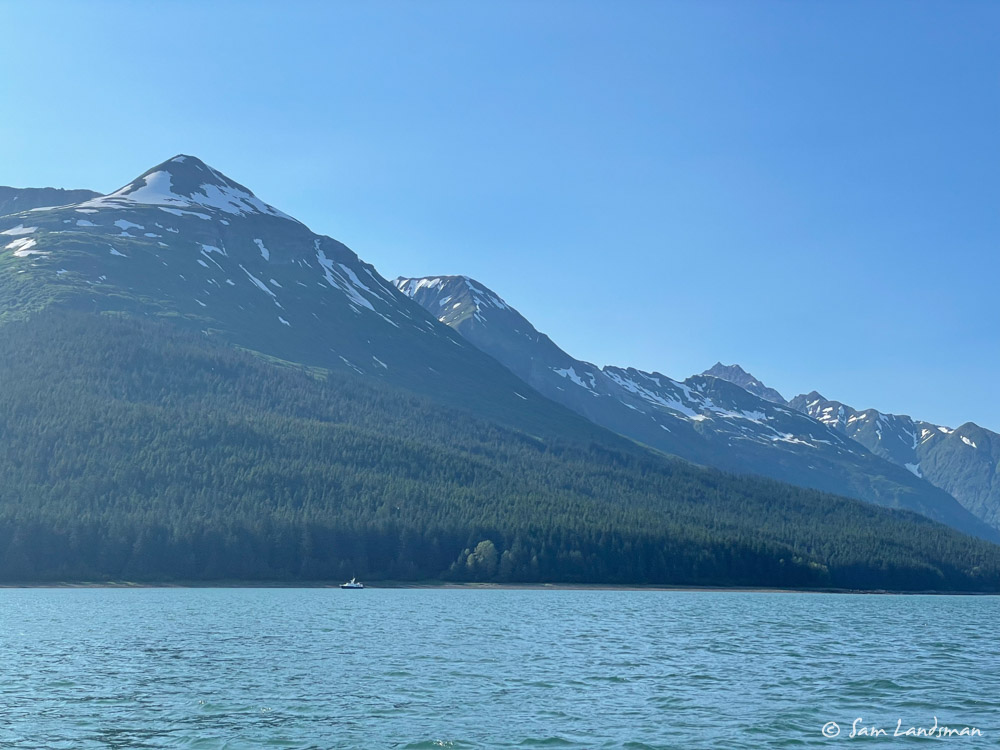 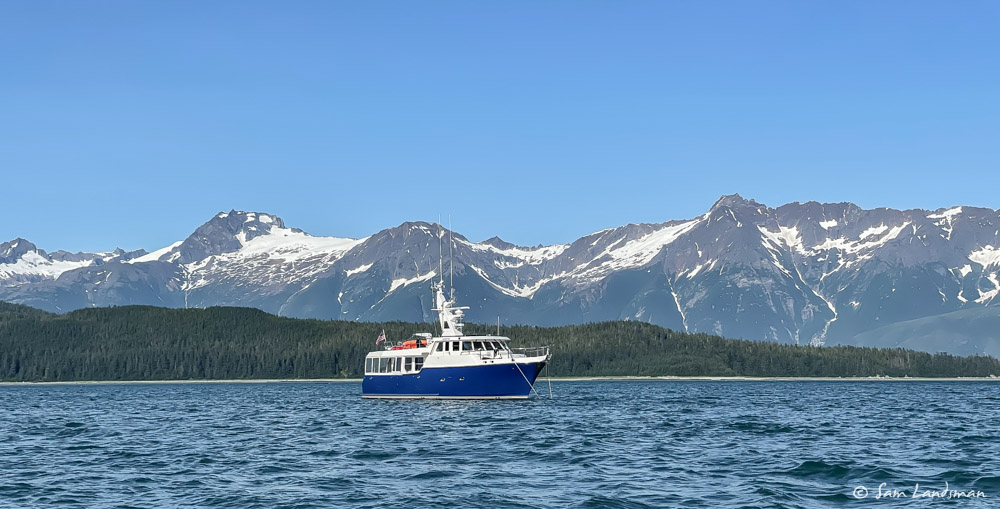 Unfortunately our good weather luck ended, and our last day in Lynn Canal was a little bumpy and not-at-all sunny. The 10-20 knots of southerly wind created, at times, a steep wind chop, particularly when it opposed current. Current, by the way, seems very poorly understood in Lynn Canal. We often had a knot or two, seemingly always slowing us down, and not at all related to what the current arrows indicated should be happening.

We ended up in Auke Bay for the night. The transient docks are first-come, first-served, so you motor around until you find a space. Inevitably there are a bunch of gaps that are just slightly too short. We looked for an hour and found nothing, not even on the outer breakwater, so we called the harbormaster and asked if there were any other options. They took pity on us and let us stay on a reserved section of the breakwater, as long as we vacated it by 8:30 the next morning. Fine, since we were just here to pick up some more friends before visiting Dawes Glacier and Ford’s Terror.