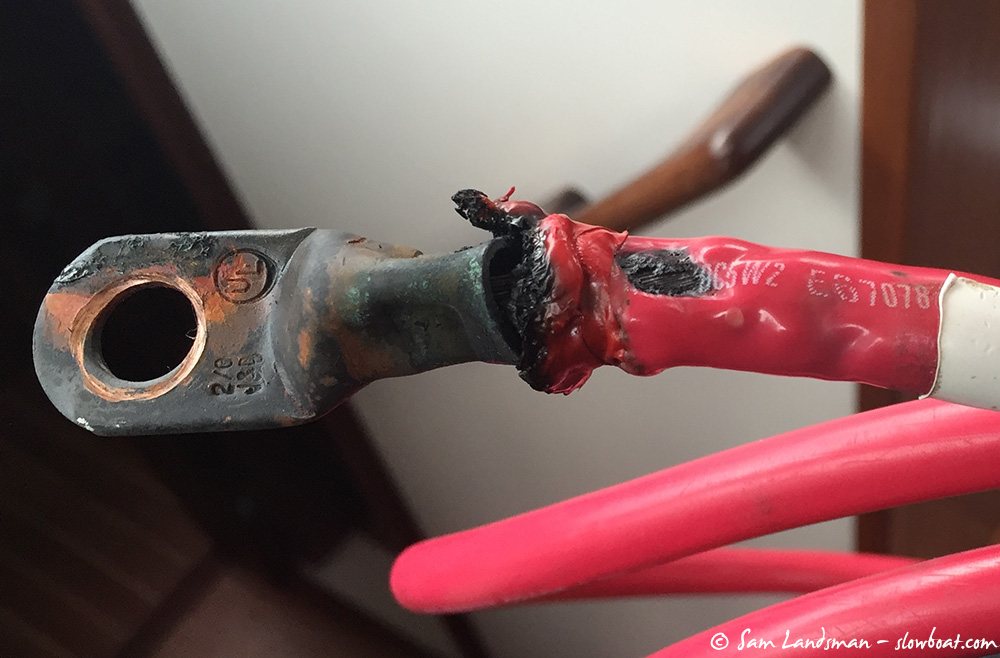 Last summer I took eight boats (nine including mine) from Anacortes to Southeast Alaska. Naturally, we experienced a few failures along the way. Below is an accounting of those failures, how we addressed them, and what lessons can be taken away.

This “professionally-installed” inverter cabling was woefully undersized—2 AWG rather than the specified 2/0 AWG, and the lug was 2/0 sized and poorly crimped to the cable. The inevitable result of this undersized wire and poor connection was enough heat to melt the insulation on the cable. The owner smelled smoke, investigated, and found this. Thankfully, there was no fire!

I had extra 2/0 AWG cable aboard, and we were able to make and install a replacement cable immediately.

The lesson? Carefully select qualified people to work on your boat and always inspect their work.

Impellers are a wear item. They’re inexpensive, and in most cases, pretty straightforward to replace. I’m unsure if this failure was the result of normal wear and tear, a clogged intake, or a faulty part.

Despite my insistence that spare impellers be carried on each boat, this owner opted not to carry the spare. This turned a quick fix into a week-long ordeal as the owner tried to find the correct impeller while we cruised north.

The first indication of this problem was increased cycling from the engine room bilge pumps. Then the inverter failed, a victim of saltwater intrusion. But where was it coming from?

Turns out there was a small hole near the end of a section of wet exhaust hose. When the engine ran at cruise speed (but not idle), seawater sprayed out of the hole, spraying on the inverter and draining into the bilge.

Since there was sufficient slack in the hose, we were able to cut off the end with the hole and reinstall.

The lesson? Keep a close eye on all systems. Spend time in the engine room. Know when the bilge pumps are working more frequently than normal (bilge counters are great). Better yet, if you keep the bilge totally dry, any leaks will be immediately obvious.

Actually, watermakers. Seven of the nine boats were equipped with watermakers. Three of those failed, each with somewhat different systems. Because watermakers are not mission-critical items, I never did find out exactly what caused all the failures.

The lesson? Use your water maker frequently and have it serviced to factory specs. More importantly, when cruising in remote areas, be sure that even if your watermaker fails, you have sufficient reserve water capacity to get to the next destination.

One water heater developed a pencil-sized hole. The other had an over pressure/over temperature safety valve fail. Both were 10-15 years old.

The symptom for both failures was fresh water in the bilge and extra cycling of the domestic fresh water pump.

We made emergency repairs to each using Splash Zone (pencil-sized hole) and Rescue Tape (T&P valve). These band-aids held until we could get replacement parts.

These failures were fairly innocuous, but what if the failure mode had been different? What if they’d dumped all the fresh water into the bilge in a remote anchorage? What if the coolant loop had failed, and dumped the engine coolant into the fresh water system? Not only does this risk engine damage, but it also puts the vessel’s crew at risk for ingesting toxins.

The lesson? Water heaters are expensive to airfreight to Alaska and they’re awkward to replace. If your water heater is 10 years old or older, replace it. They’re not that expensive, and it’s a whole lot easier doing the work when you’re not out cruising.

Also, carry Splash Zone and Rescue Tape, and install valves to bypass the water heater in the event of failure.

Nobody likes working on the sanitation system, especially when you’re in the middle of nowhere and the holding tank is full to overflowing. But pumpouts aren’t available along most of the Inside Passage, so using the macerator to dump the holding tank is the only option.

In this instance, the macerator pump failed (no, I didn’t tear it apart to do a post mortem!) and this boat was stuck with a full holding tank. Luckily, their second head was plumbed to its own holding tank, so the owners still had somewhere to go!

The owner did not have a spare aboard, but I had a drop-in replacement, which I offered. The yard in Shearwater replaced the pump, and all was good!

The lesson? Dump the holding tank long before it’s full, and carry a spare macerator (and lots of rubber gloves and disinfectant).

While anchoring, the anchor chain jammed. Upon closer inspection, the metal piece that knocks the chain off the gypsy had pulled out of the deck. Lowering the anchor was still possible, but when retrieving, the chain stayed on the gypsy rather than falling into the chain locker.

We made a temporary repair by reattaching the “chain knocker” using epoxy and longer screws.

Ensure that the entire ground tackle setup is sized appropriately. Carry a selection of screws, bolts, fasteners, and epoxy to make emergency repairs.

Finding a pool of diesel below your main engine is never good, and that’s exactly what one owner returned to after dinner. After a close examination, the owner determined the leak was from one of the low-pressure fuel hoses.

Of course, this was a proprietary Cummins part, with only a single example available in all of North America.

We were able to overnight the part from Memphis, TN to the Canadian Cummins distributor in Vancouver. The part was then taken by courier to the Vancouver airport, loaded onto a small plane, and flown to Bella Bella, where the owner picked it up and installed it. Problem fixed!

The lesson? Inspect hoses regularly for wear and chafe (although the failed hose appeared to be in new condition) and replace if necessary. Carry Rescue Tape. If practical, carry complete set of spare hoses.

What broke on my boat?

Intermittent problems are the toughest to troubleshoot, and this one was no exception. Occasionally, the generator (Northern Lights M673) just wouldn’t make power. The engine ran perfectly, all the breakers were in the correct position, but no power.

Finally, the problem became frequent enough that I opened up the control box and tightened every connection I could find. Success, or so I thought.

A month later, same problem. Upon closer examination, I discovered the fuse holder on the automatic voltage regulator was a little loose. I tightened it up, and all seems to be good.

The lesson? Intermittent problems rarely stay intermittent. Be tenacious when chasing down a problem.

We were in front of Dawes Glacier and I’d just sent two friends out in the kayaks. The wind was blowing me towards icebergs and then rocks. I had to move. I shifted the transmission into reverse and noticed it felt a little “mushy.” Once I’d backed away from the nearest iceberg, I shifted to forward and advanced the throttle. I went faster, but only in reverse!

I jumped (literally!) into the engine room and manually shifted the transmission into neutral and restarted the engine. Neutral worked. I tried the same thing with forward, and that worked.

Knowing that the problem lie in the control system, not the transmission itself, I continued searching. The transmission/control cable linkage was good, so I looked at the throttle/shift lever at the helm. Sure enough, a cable clamp had loosened. Tightening the cable clamp solved the problem!

As we motored towards our soaking crab trap, the dinghy engine abruptly died. No amount of yanking on the starter, jiggling the fuel hose, or cursing at the outboard made it work, so I pulled out the oars and rowed back to the boat.

Back at the boat I noticed fuel dripping from the quick-connect fitting where the fuel hose meets the engine. I removed, disassembled, cleaned, and reassembled both the male and female fittings to no avail. Given that we were in Glacier Bay National Park, far out of cell phone range, there wasn’t much I could do.

A few days later we arrived in Elfin Cove. I borrowed a fuel hose from someone on the dock and confirmed the problem was with the fuel hose and not the outboard itself. Then I phoned Western Auto & Marine in Juneau and ordered a replacement hose. They dropped the hose off the following day at Alaska Seaplanes. A few hours later, I had the part in hand. Amazingly, this next day air service cost just $15!

The lesson? Even in remote Alaska, it’s possible to get parts delivered quickly. And a spare fuel hose is an inexpensive, easy-to-store part to have on hand.