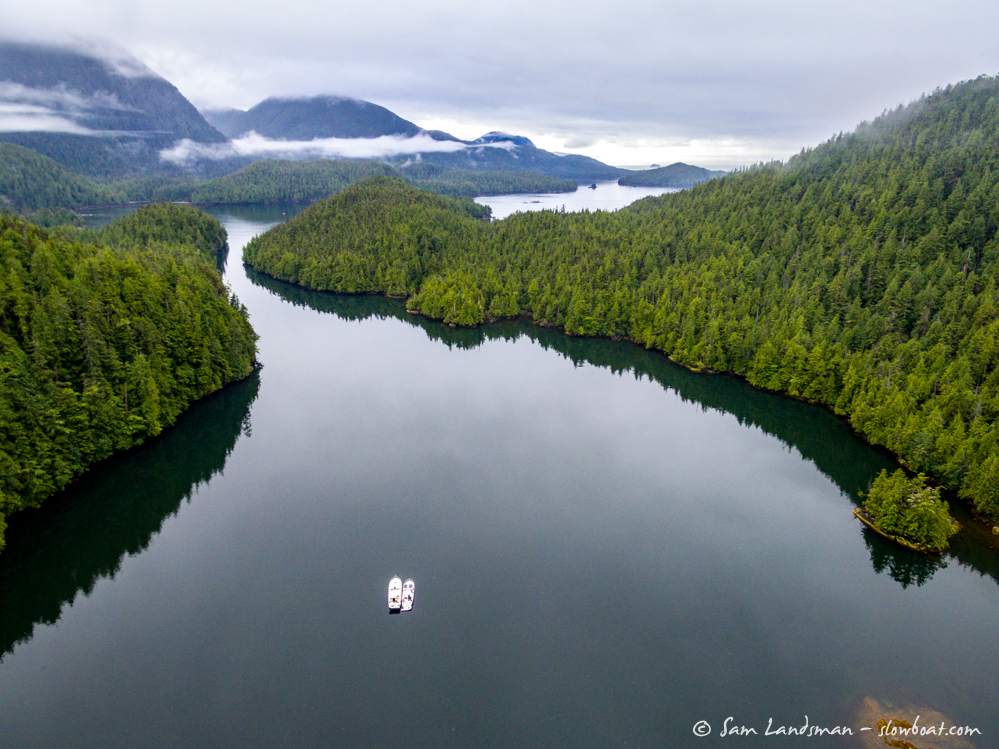 Quatsino Sound is the northernmost of the five sounds along the west coast of Vancouver Island. It’s also among the most developed, with many active logging operations and several communities scattered throughout (and good cell phone service!).

The run from Sea Otter Cove to Quatsino Sound was easy: no wind, lazy swell. For boaters used to cruising the Inside Passage (including us), being out in the ocean is different. Even on a calm day, the boat pitches and rolls. We usually enjoy it, but extra preparation is required before getting underway each day to ensure that all loose items are secured.

Our first stop in Quatsino Sound was Varney Bay, at the mouth of the Marble River and just a few miles from the settlement of Coal Harbour.

Friends raved about exploring Marble River by dinghy or kayak. They spoke of a beautiful gorge, small rapids, and lots of wildlife. Getting a dinghy into Marble River requires a high(ish) tide. We arrived in the afternoon, near the bottom of a 5.75 foot low tide. High wasn’t until after dark, so we decided to see how far we could get on the low tide.

The most challenging part was getting past a big tidal flat at the entrance. One short section required tilting the outboard clear of the water and rowing, but we picked our way through. Beyond the tidal flat, the river narrowed and deepened. Mottled gray rock walls rose on each side. Caves indented the cliffs and seals relaxed inside big divots in the rocks. 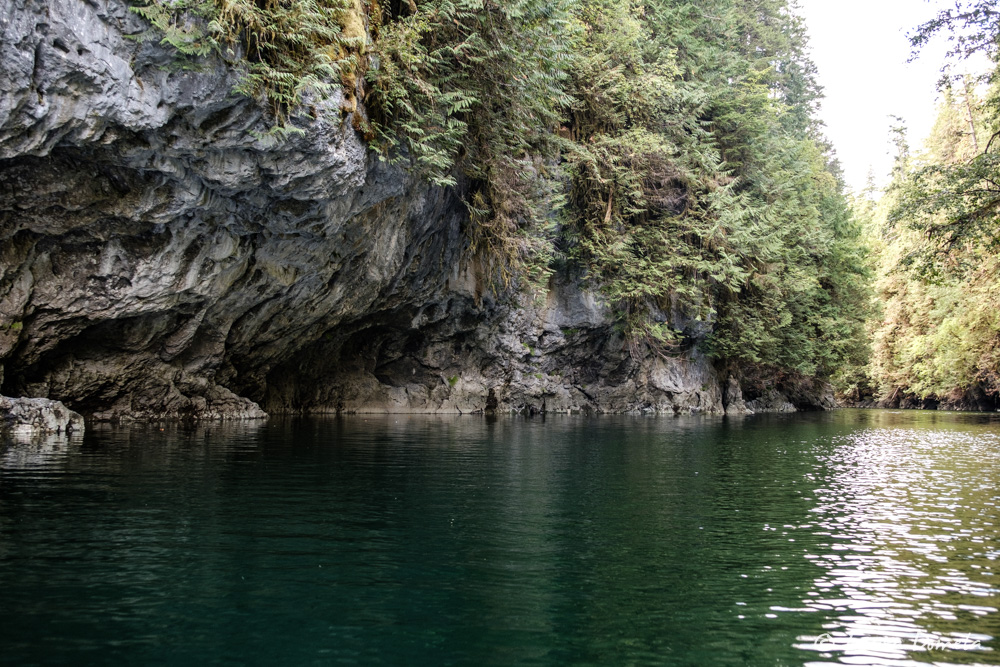 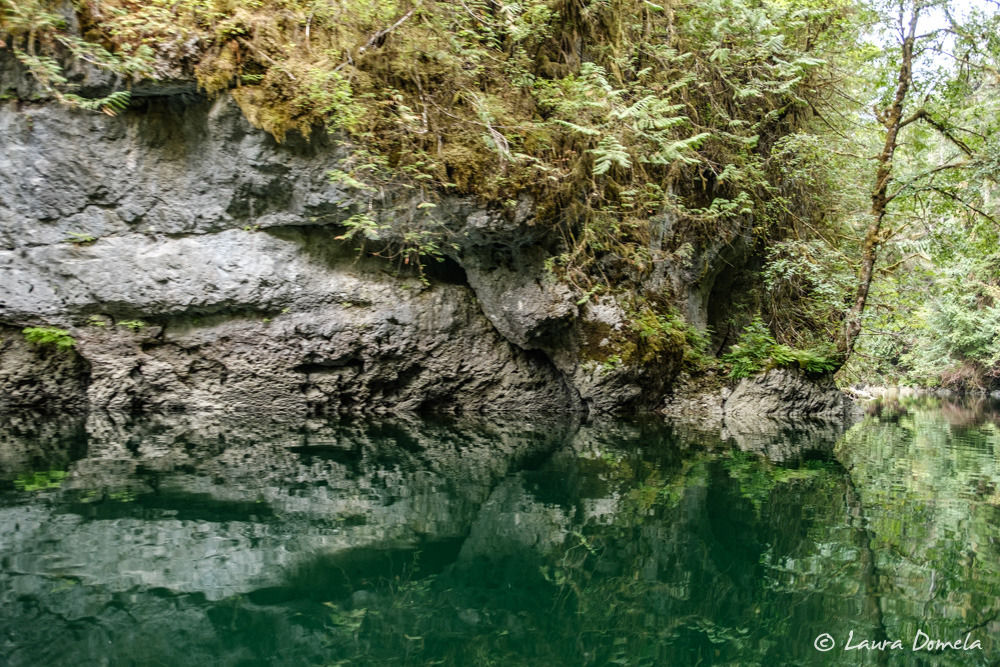 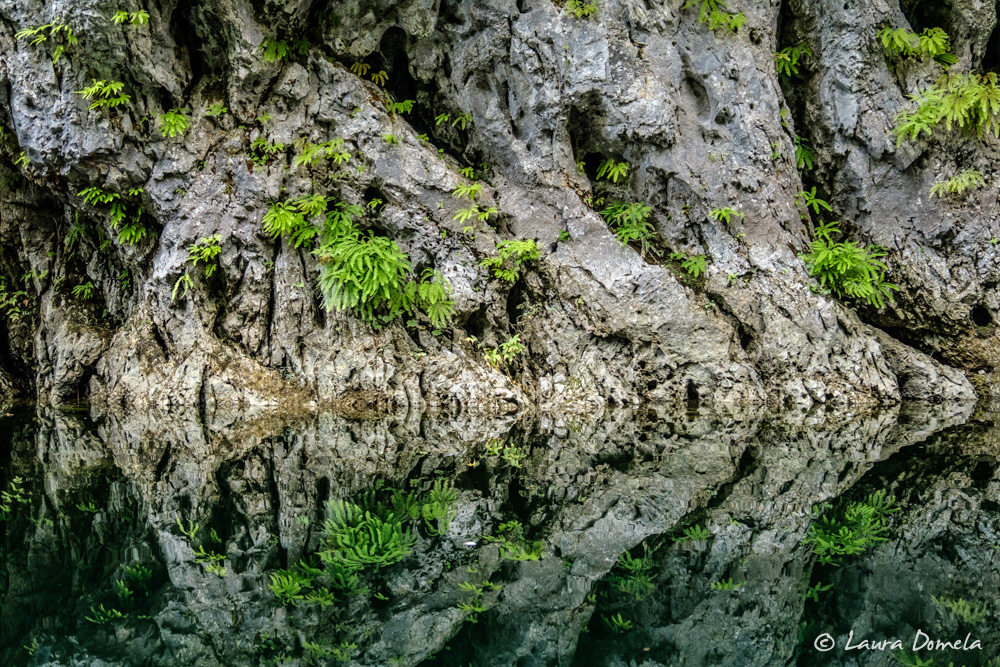 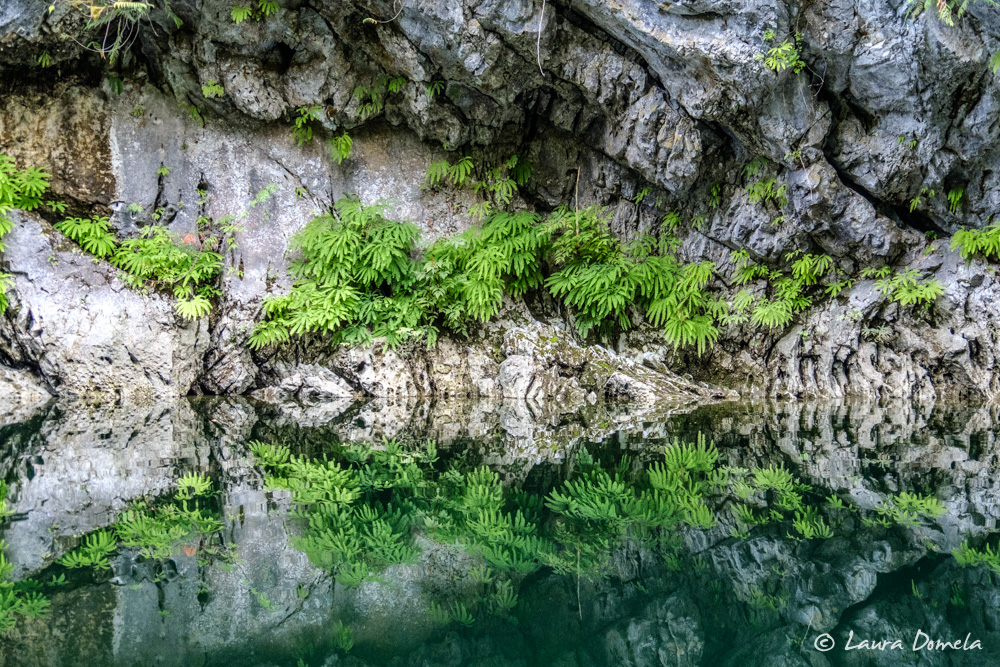 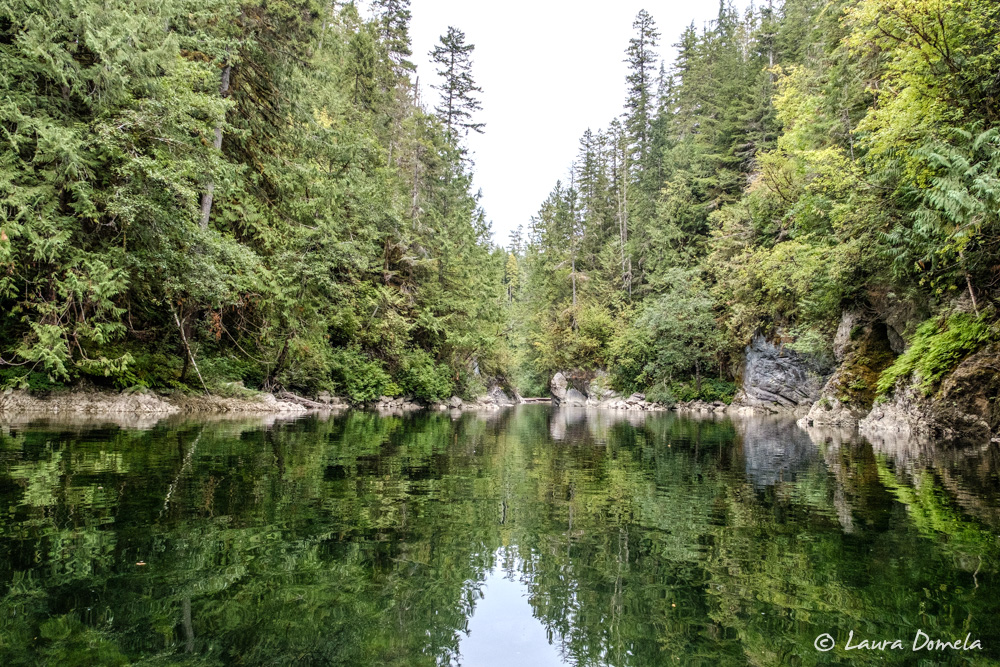 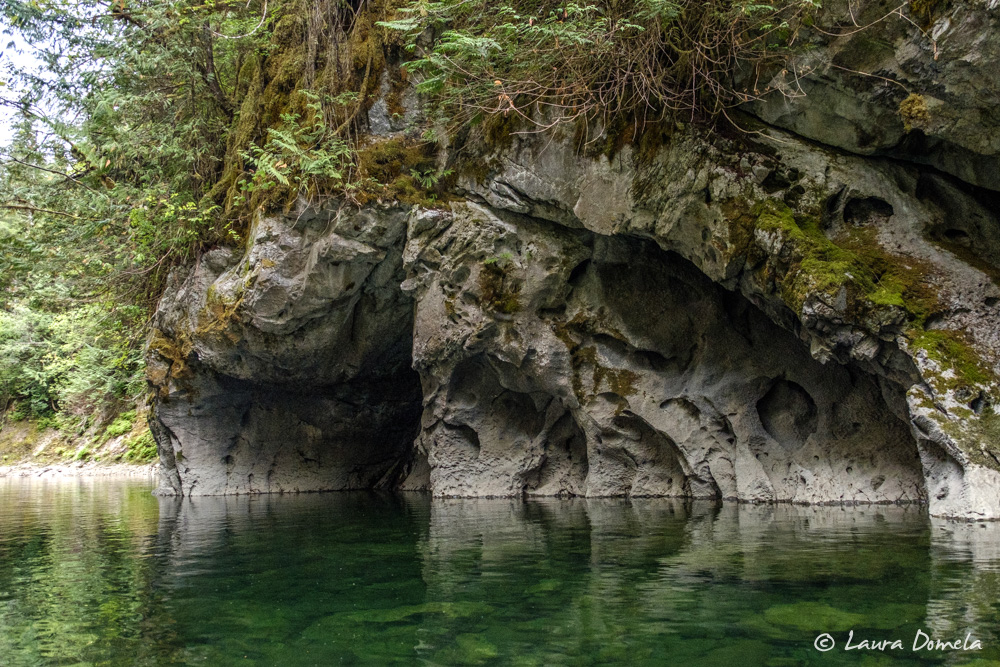 We quickly came to a set of rapids. After a couple attempts to get through, we realized we’d need to come back on a higher tide. So back to the boats we went to have a quick dinner while we waited for more water.

With the tide a few feet higher (probably an 8 foot tide by this point), the first set of rapids was easy to negotiate. A few hundred yards further the river bent sharply to the left, dramatically undercutting a cliff. Then, more rapids. We tried running them, but the rocks were too shallow for our outboards and the current too swift for our oars. Undeterred, we beached the dinghies, walked around the rapids, and pulled them through from above using a long line. 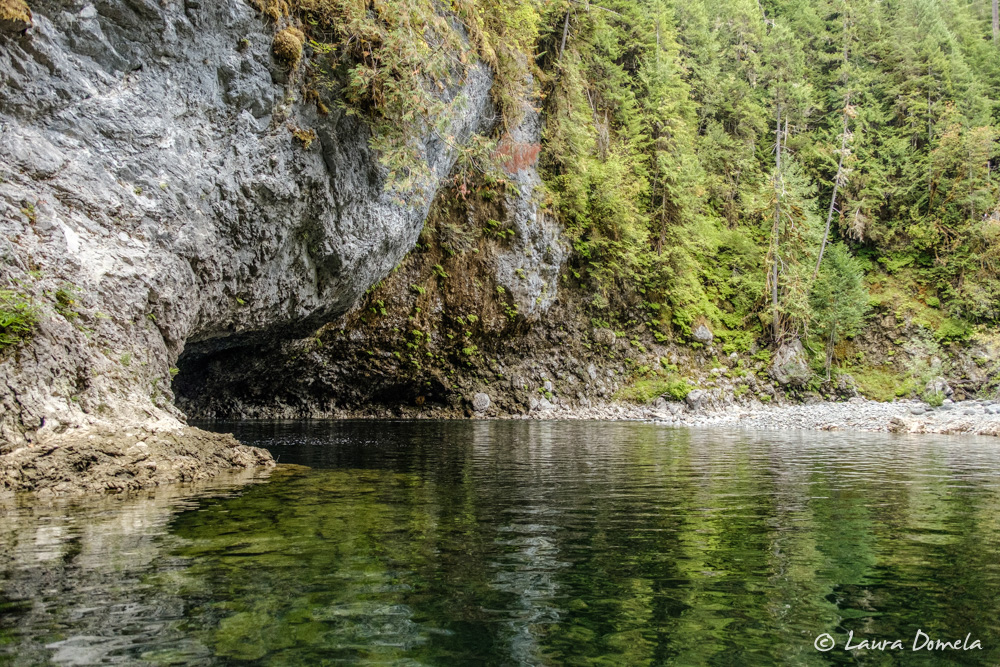 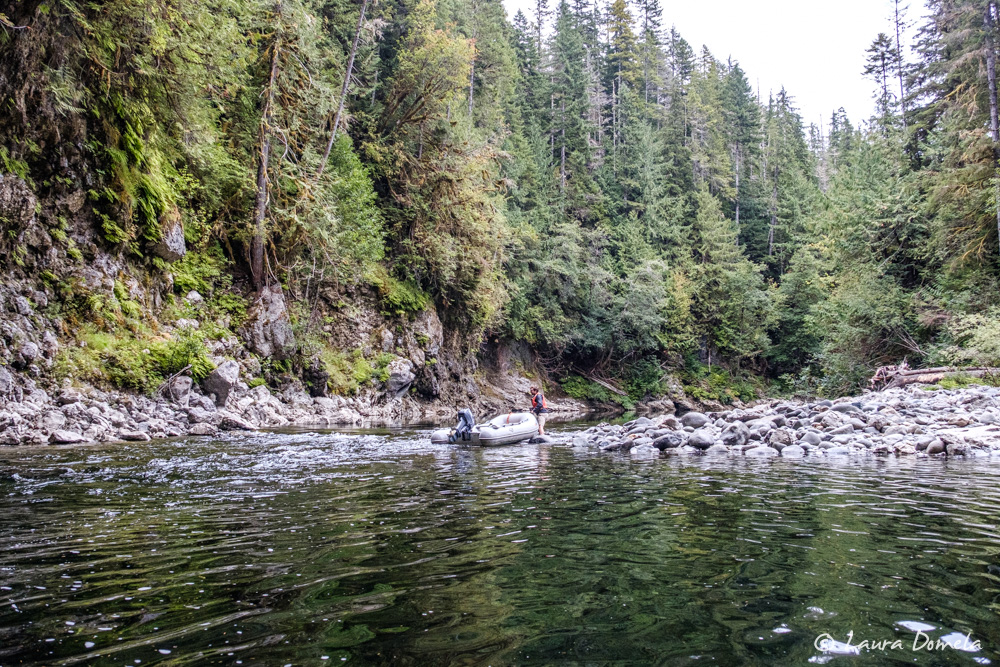 Another few hundred yards, though, we found another, larger set of rapids. These rapids were big enough that even a high tide wouldn’t submerge them. We turned back, drifted motorless through the previous rapids, and returned to the boats.

The next morning we took the dinghies a few miles to Coal Harbour. During World War II, the Royal Canadian Air Force operated a seaplane base here. After the war, Coal Harbour thrived as a whaling station, then a mining and timber town. Today, not much is left. There’s a small marina, a few houses, and a hotel with a (closed for the season) convenience store. Inside one of the old hangars is Joey’s Museum, a highlight of our visit. 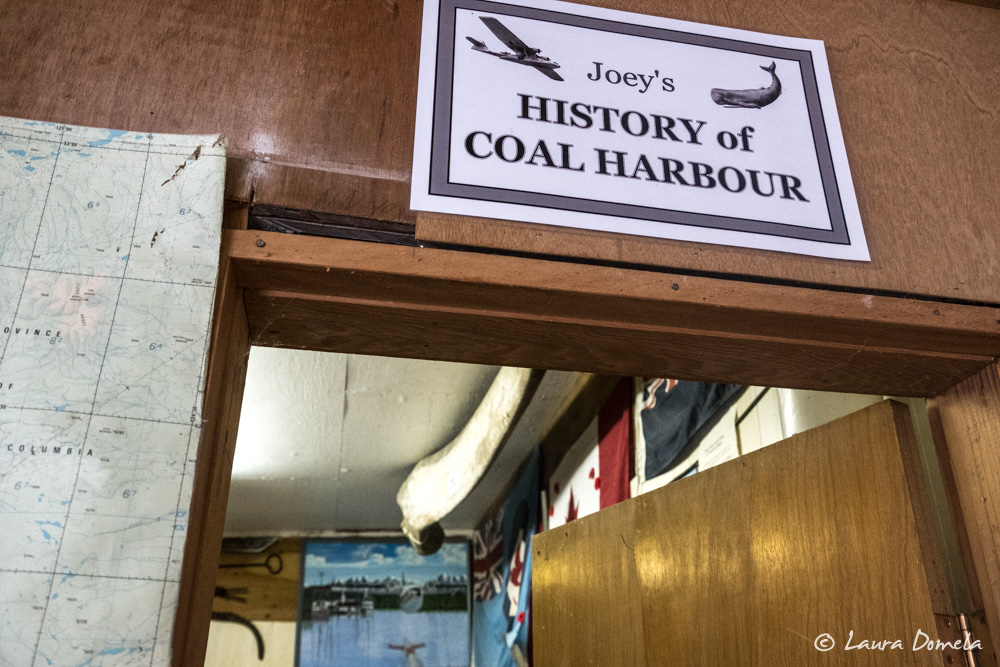 The three rooms of the museum house artifacts from Coal Harbour’s past: a cutaway of a Stranaer’s engine, a whale jaw, dozens of chainsaws, a bunch of old outboard motors, a well restored fire truck, old telephones, newspaper clippings and photographs. Visiting the museum is free and we enjoyed learning about Coal Harbour’s history. 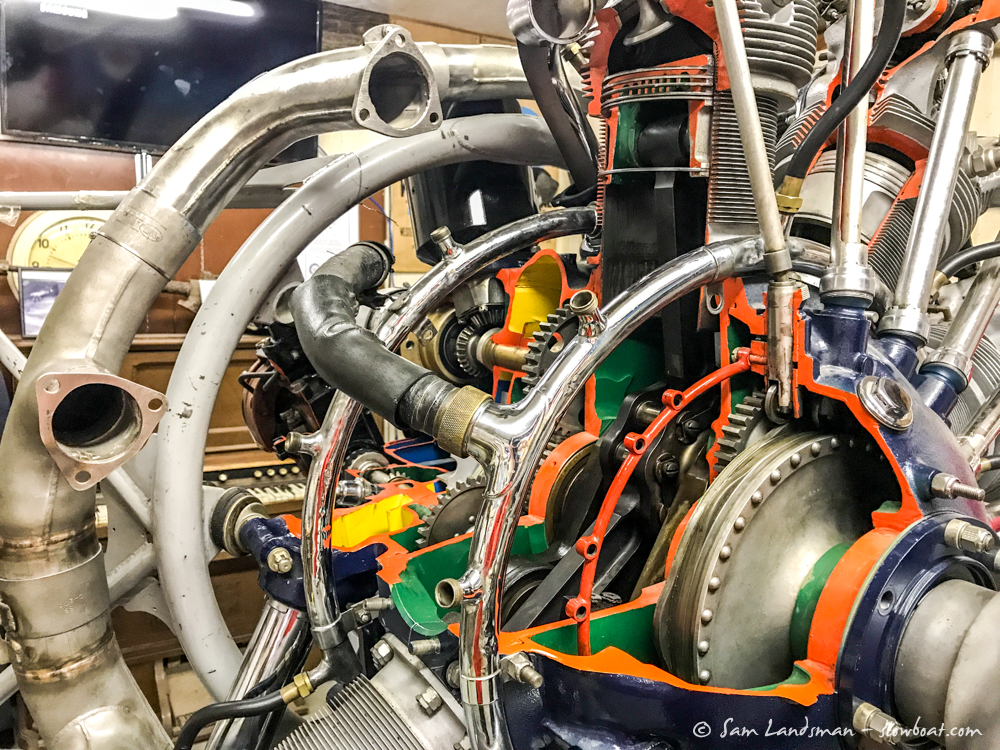 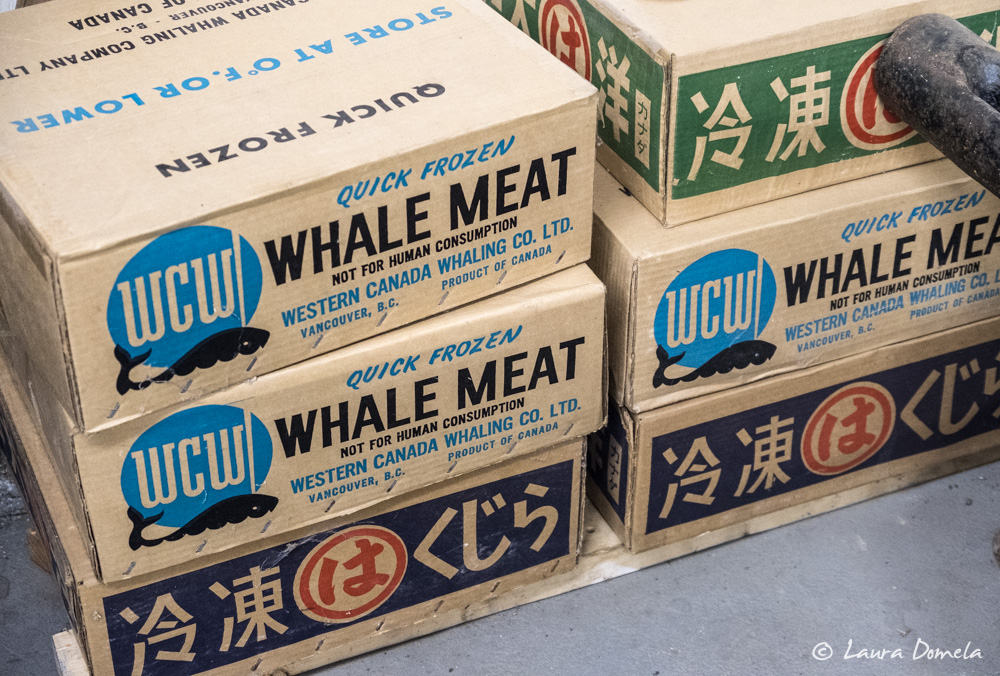 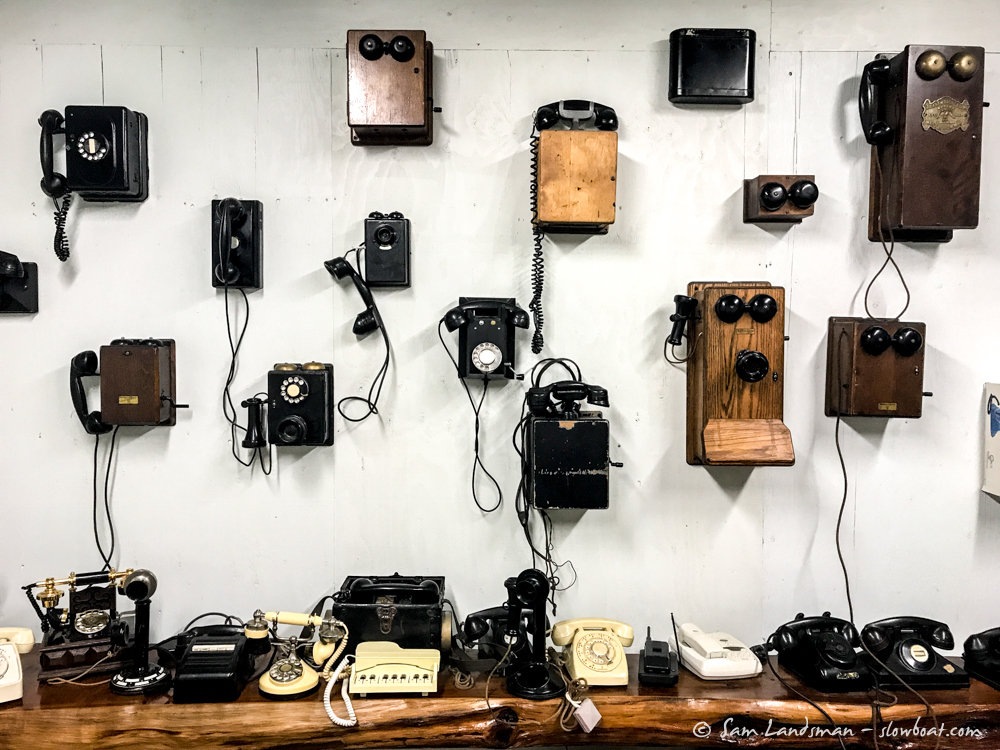 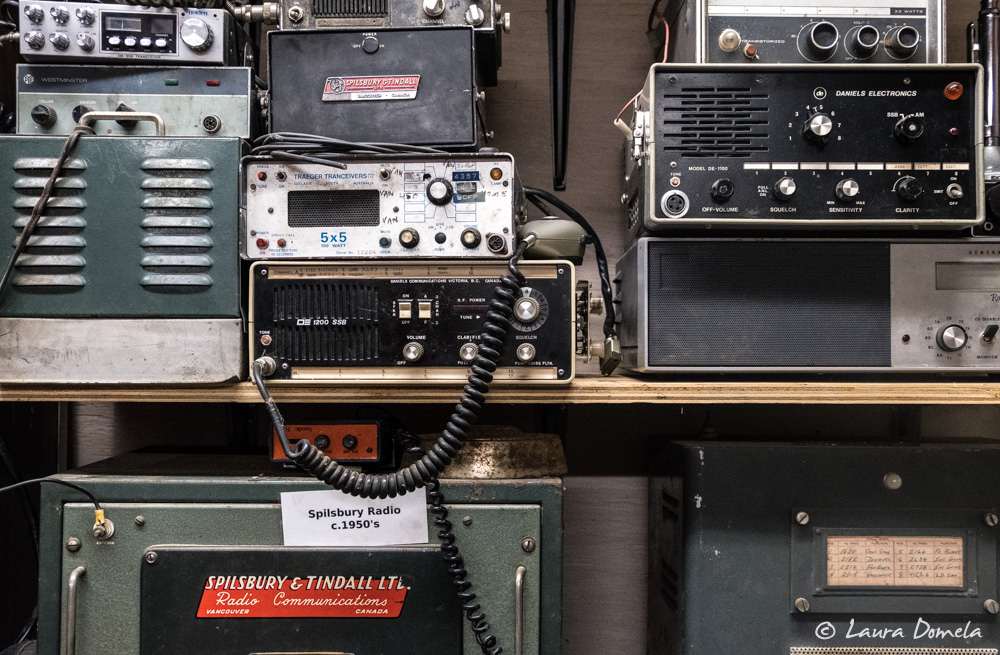 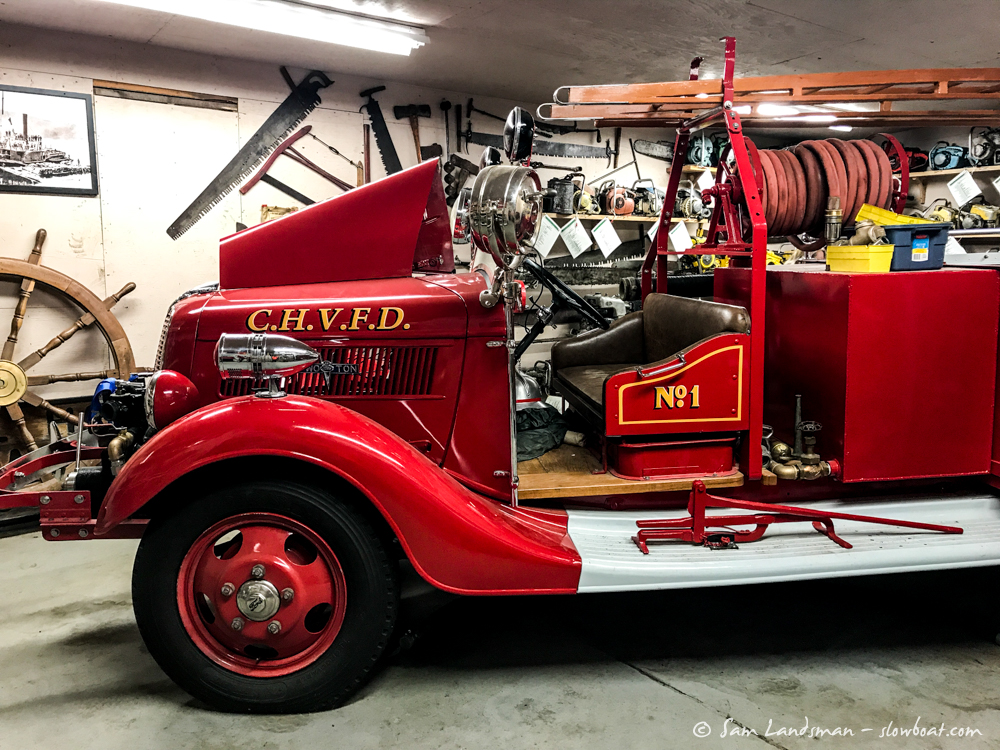 Back at the boats, we pulled anchor and headed to nearby Julian Cove, one of the more scenic anchorages in Quatsino Sound. Tall, verdant hills surround the anchorage, and evidence of logging is hard to see from the water. 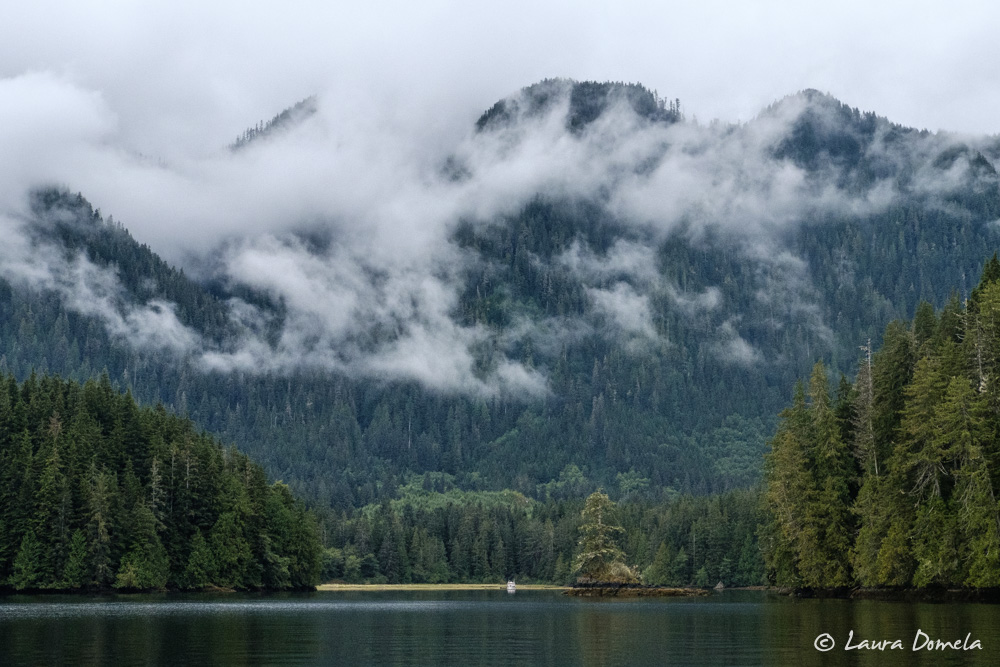 From the drone, though, things look different… 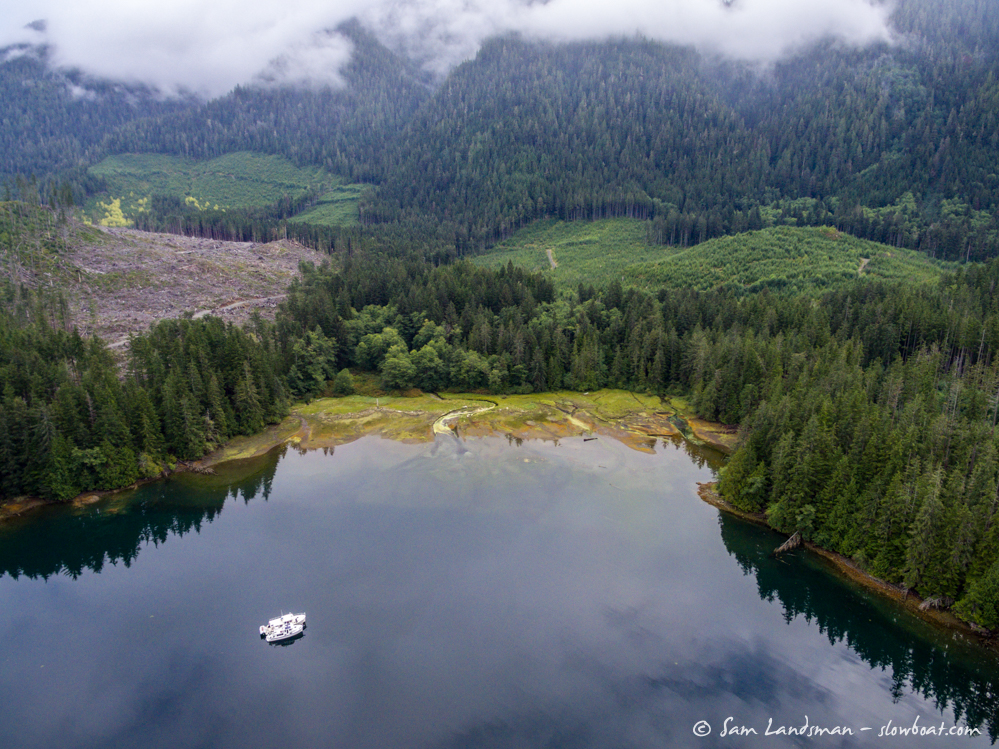 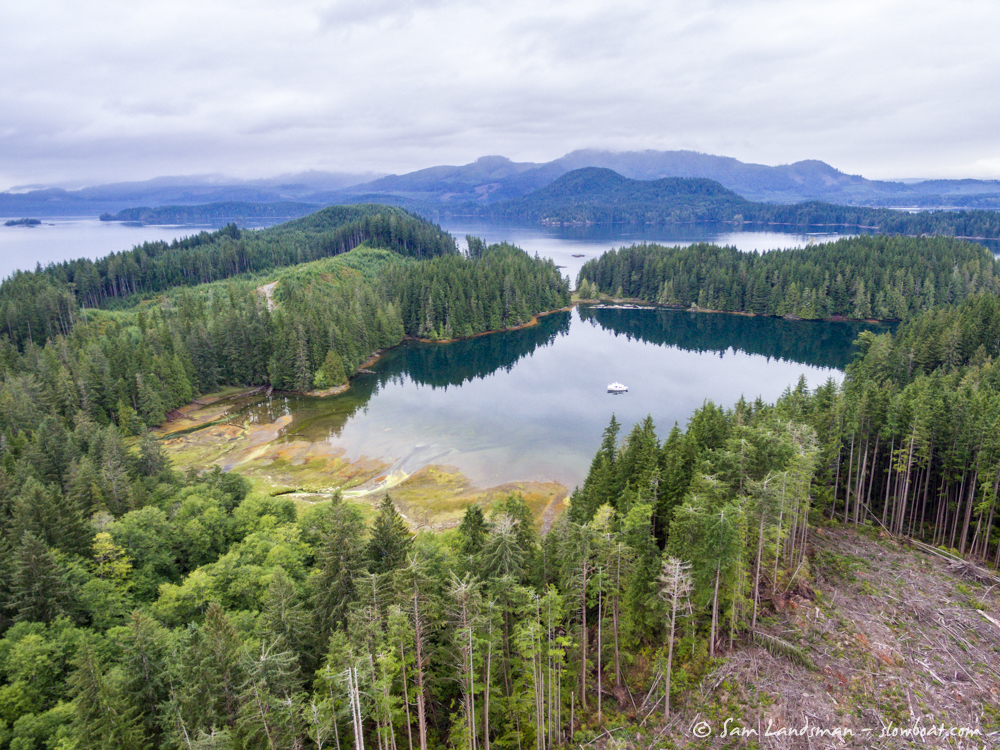 Heading south from Quatsino Sound requires rounding Brooks Peninsula, which juts 15 miles seaward from Vancouver Island and creates its own weather. It’s not uncommon to see calm weather reports along most of Vancouver Island, but Solander Island (the weather reporting station just offshore from Cape Cook, at the tip of Brooks Peninsula) reporting 40 knots of wind. Currents are problematic, too, as they converge and amplify the ocean swell and wind chop. Ships are lost here, but on a calm day it’s no big deal.

With the forecast calling for calm the following day we decided to seize the opportunity. From Julian Cove we motored out of Quatsino Sound and headed for Klaskish Basin, a scenic anchorage just north of Brooks Peninsula. Getting into Klaskish requires transiting a narrow-but-deep channel. The channel was accurately charted on the Canadian Hydrographic Service raster charts, but both Navionics and Garmin charts showed us driving over land. 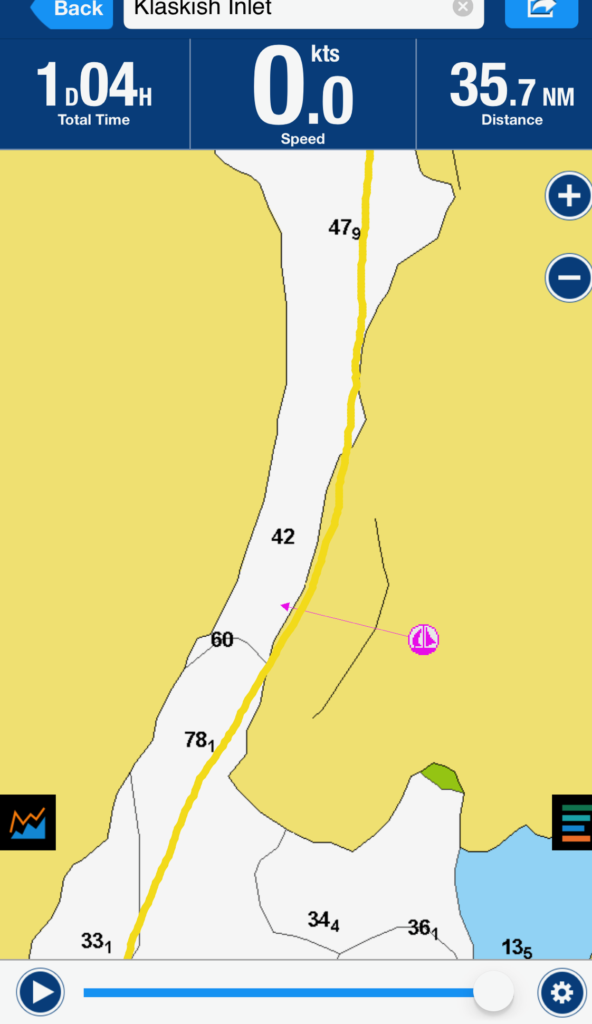 Thankfully, a mid-channel course is free of obstacles. Inside, tree-lined mountains rise all around. A river looked like it would be interesting to explore, but we arrived late and would depart early, so we saved the exploring for next time.

Here’s a map showing where we’ve been: 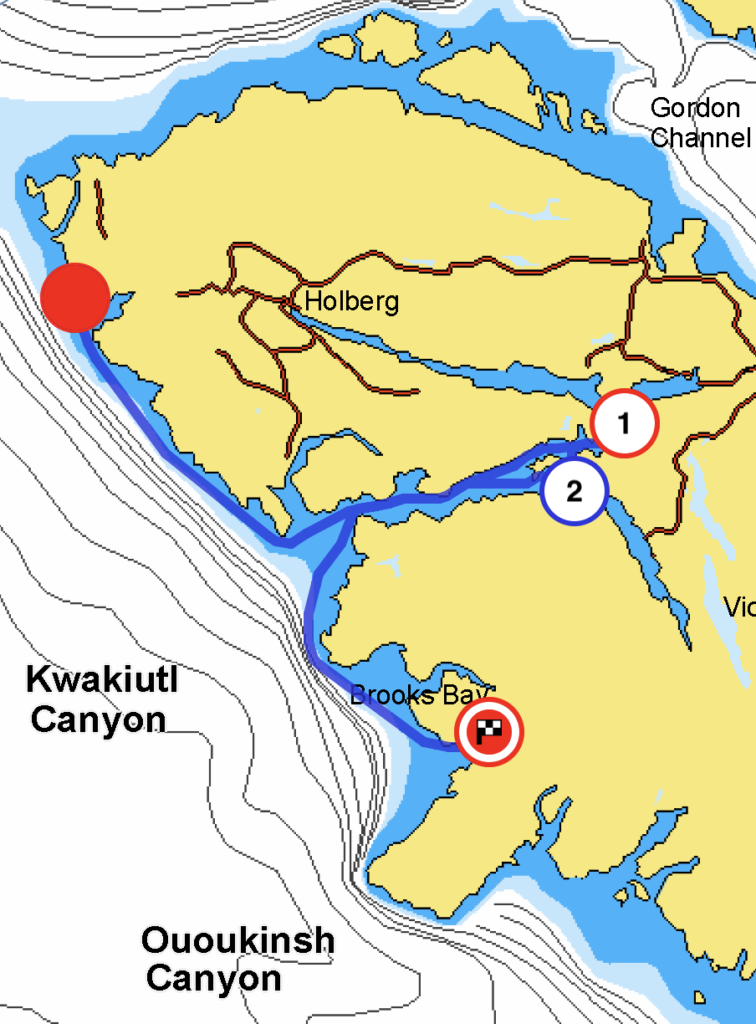