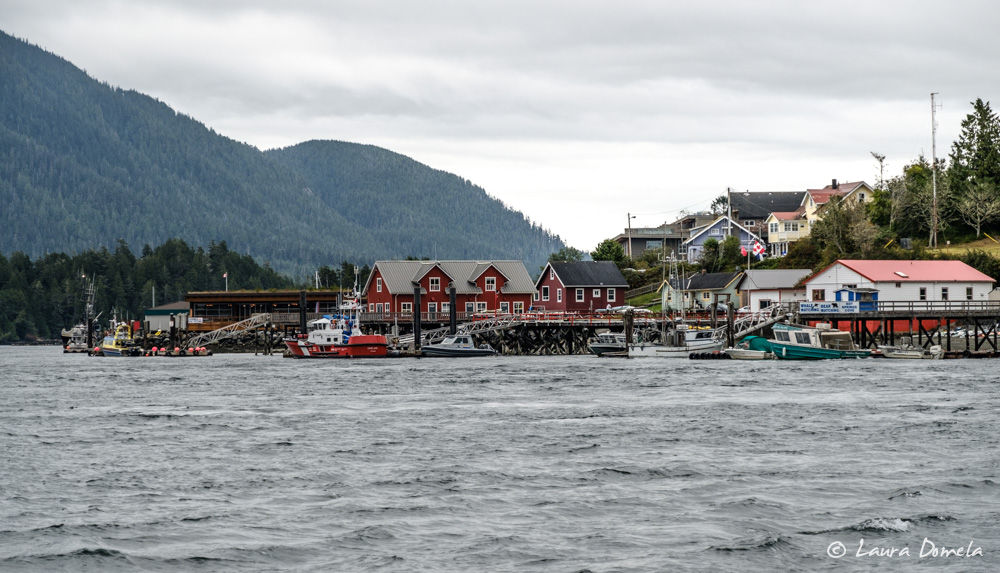 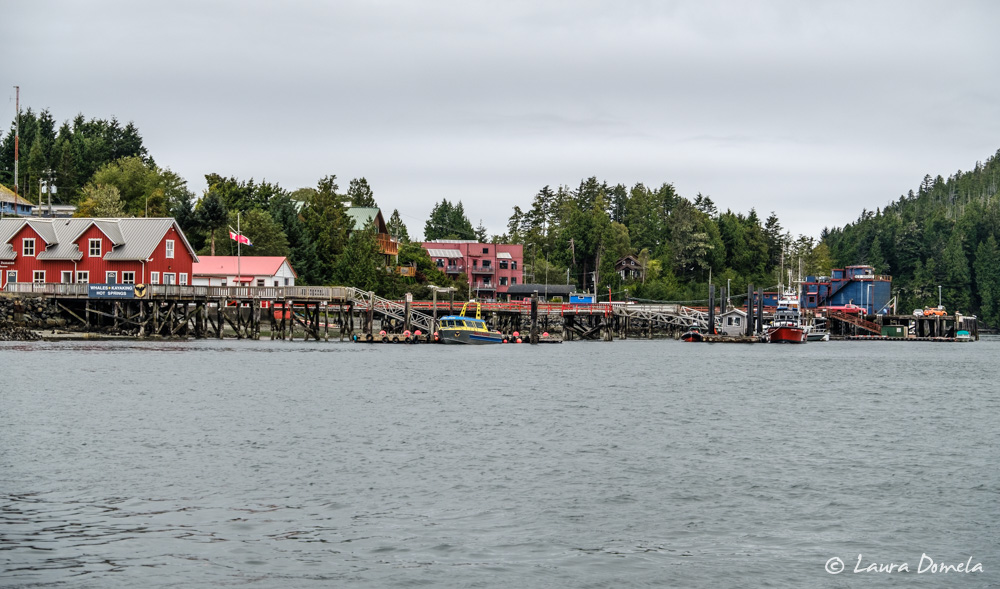 Approaching Tofino is a bit overwhelming after weeks in the wilderness. Boats—tour boats, fishing boats, skiffs, seaplanes—zoom this way and that. Shoals dot the waterfront. Current runs to four or five knots.

We tried hailing the harbormaster at the public docks to no avail. When we looked at the largest facility, 4th Street, the place seemed full. Boats, mostly much smaller than ours, rafted two or three deep. We continued down to the Crab Dock. About 40 feet of dock was available, all the way at the end, but the current was roaring. The dock was making a wake! We managed to get alongside and get a midship line around the bull rail. The dock groaned and shifted from the load and the line stretched as the current tried to pull the bow away. Unable to wrestle the bow back in, we scuttled the plan and headed away from the dock to figure out what to do.

At this point our options were either anchoring somewhere nearby, which didn’t seem particularly appealing given the amount of rolling we’d do in wakes, or finding moorage at a private marina. We called Tofino Resort and Marina, formerly Weigh West Marina, and they gave us instructions on where to tie up. The marina has recently been totally updated. Power, water, laundry, WiFi, and showers are included in the (somewhat expensive) rate. The docks are clean, stable, and modern. The staff is friendly and helpful. And they take reservations. We’d stay here in the future, just to avoid the hassle of motoring around Tofino for an hour trying to find a place to tie up at the municipal facilities.

Tofino is unlike any other city or town on the coast. It’s small—something like 1800 year round residents—but it’s a hugely popular tourist destination. Trendy restaurants abound. Surfing is popular. Outfitters do a brisk business selling kayak tours, whale watching, hot springs visits, and more. We heard visitors speaking German, French, and Japanese. It’s a bit more hip than anywhere in SE Alaska and more authentic than the resorts in the San Juans or Gulf Islands. It’s like a Southern California surf town in Alaska…or a blend of Whistler, Maui, and Vancouver. We enjoyed craft cocktails (cedar-infused rye!) at a spot called Wolf in the Fog, and had a fantastic late dinner at a restaurant called Shelter. We didn’t get down to the Tacofino taco truck this time, but it’s gotten popular enough that there are locations all over…we’ll hit the one in Victoria!

Next: Back to the wilderness in Barkley Sound.

2 thoughts on “Tofino | West Side of Vancouver Island”