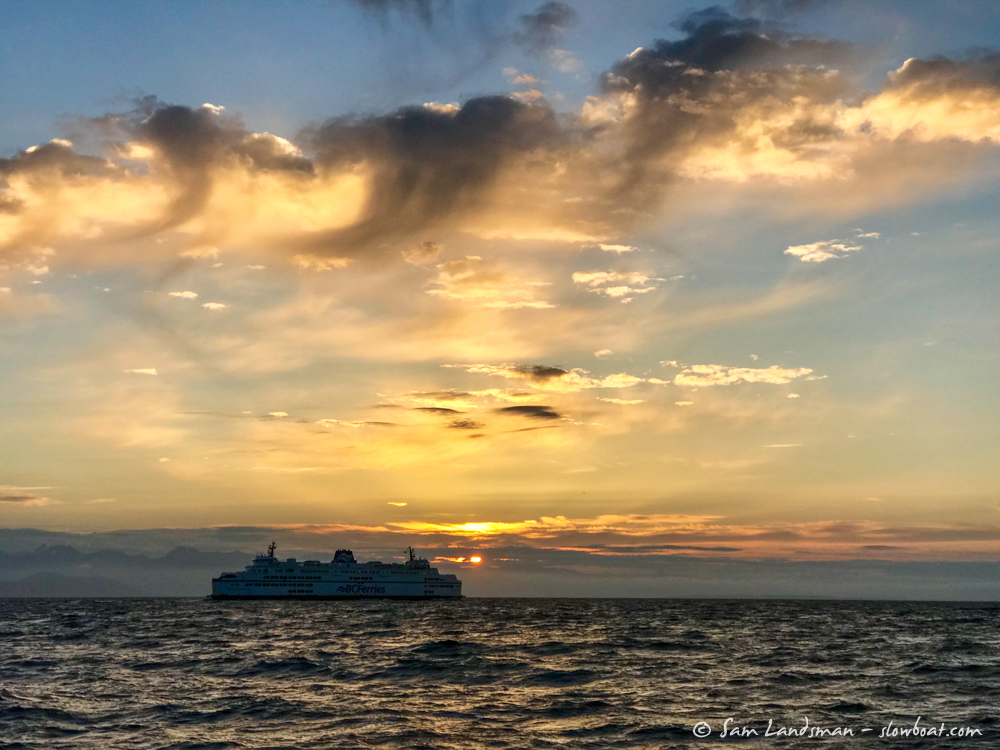 The Strait of Georgia is the first “gate” on our way to Alaska. It’s only a few hours across, but if it’s windy it can be a miserable few hours.

We look at a bunch of different forecasts before crossing any of the gates. Most of the time, the forecasts are pretty much in agreement. The trends are the same and predicted wind velocities are similar. For the Strait of Georgia crossing, we look at Environment Canada’s forecasts for the Strait of Georgia, both north and south of Nanaimo. Environment Canada predicted 5-15 knots from the southeast. No problem.

Windfinder and Windy didn’t agree. Both showed a much brisker southeasterly—15-25 knots—and they showed it starting around 6:00 a.m. and dying about 3:00 p.m. Those wind velocities are right at the limit of what we like. We’re certainly not excited to cross with that much wind, but not eager to stay in port either. The timing was problematic, too. We couldn’t leave early enough to beat it, and the predicted conditions weren’t so bad that we wanted to wait until the evening to make it across.

We decided to check the weather in the morning and evaluate conditions. We created a Strait of Georgia Weather Worksheet that makes visualizing conditions throughout the Strait easy. On our route, from Silva Bay to Pender Harbour, we were most concerned with the Entrance Island and Merry Island lightstation reports and the Halibut Bank buoy report. Unfortunately, at 5:30 a.m., the lightstations weren’t yet reporting and the Halibut Bank buoy went offline in the middle of the night. We’d be crossing based on the forecast. 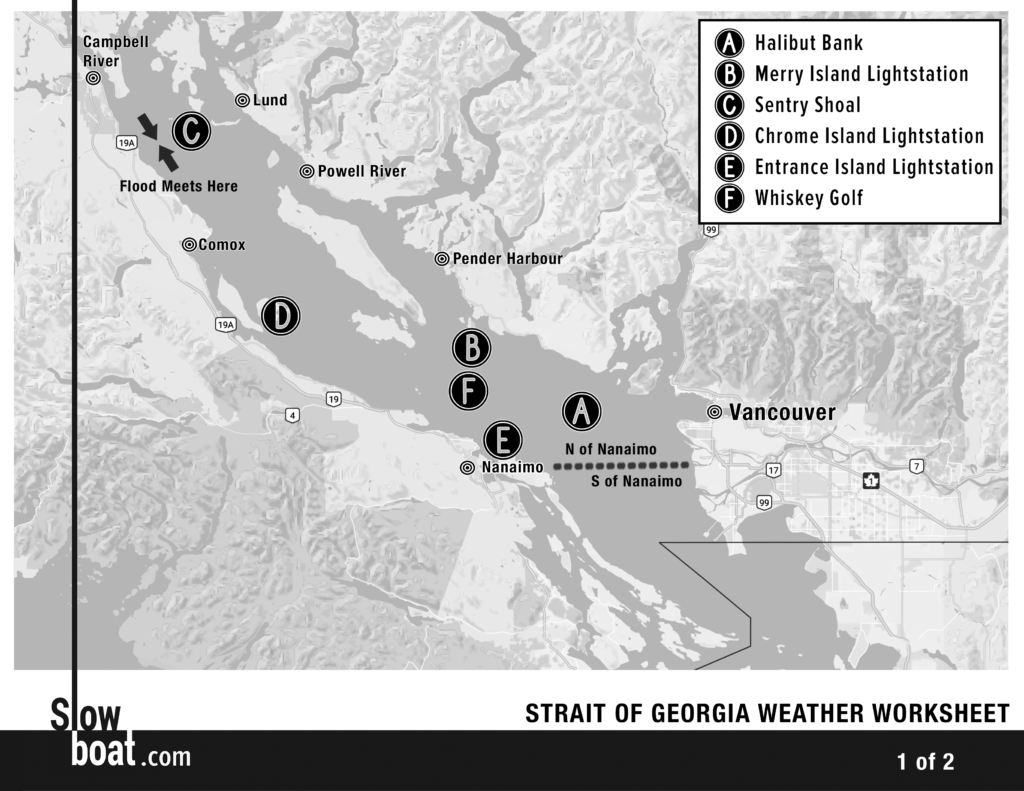 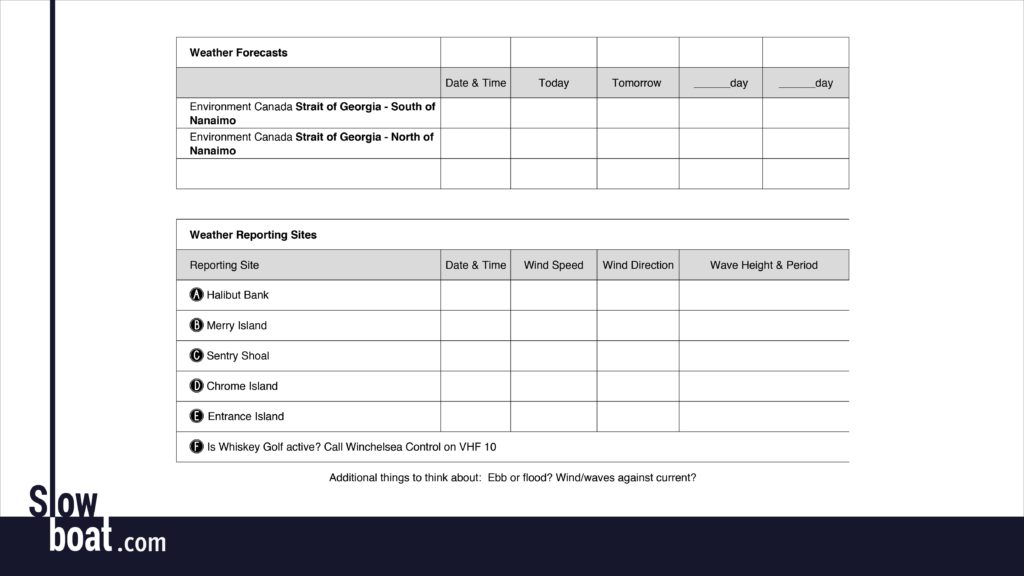 A few things were in our favor. The big one was the current was flooding, which meant the wind and current were going in the same direction. And Whiskey Golf, the torpedo test range, was not active, so we could go directly across the Strait.

Eager to get underway before the worst of the wind built in late morning, we departed Silva Bay about 5:30AM. Conditions were lumpy but not awful. Just like Windy and Windfinder predicted, we saw wind in the 15-25 knot range and seas between two and four feet. The Entrance Island and Merry Island lightkeepers called the conditions three foot moderate, and it confirmed that three foot moderate is about the worst most cruisers want to experience.

North of Welcome Passage, the seas mellowed out. With the seas squarely on our sterns, the ride improved dramatically.

The bonus of leaving super early in the morning is we arrived in Pender Harbour with plenty of time to catch up on our chores: testing ground tackle and dinghies and going to the grocery store to pick up the items we weren’t allowed to bring into Canada. The IGA and the liquor store are a short walk from the public dock, and the IGA manager said he actually advertises to boaters welcoming them to take carts from the market to the dock to make their trip easier. Apparently during the summer he drives down to the dock to pick up carts several times per day!!

Over happy hour and dinner, we discussed the crossing. Most people think three foot moderate sounds pretty benign until they experience it. In the future, these cruisers will know what three foot moderate feels like. Don’t get us wrong: the crossing wasn’t bad, it just wasn’t particularly good. On Safe Harbour, Sam has developed a number of scientific measurements for assessing comfort aboard…things like whether or not the fenders stay on deck (they roll off when it gets really rolly), the paper towel holder ends up in the sink, the salon table topples over, or the plates and bowls liberate themselves from their locker. On this crossing, only once did a fender roll off the deck, he was able to cook a breakfast sandwich underway, and the table and plates and bowls stayed in place!

On Airship, Kevin and Laura know it’s rough when the knife block falls over, cushions fly from the settee, and the weather station in the stateroom dives off the shelf. (All of those things happened.) The fenders stayed put on deck, but breakfast waited until Pender Harbour.

Dan and Eileen on Nordic Tug 37 Fortunate have an ice maker on board, and they say that when it’s rough underway, water sloshes out of the ice trays. They’re able to gauge how rough it was by 1) how small their ice cubes are 2) how many smaller ones are in the bin. Clever!

Might we have done anything differently? The consensus was no. The wind didn’t die off until too late, so we would have had to spend another night in Silva Bay to hope for better conditions. Nobody thought conditions were bad enough to delay by a full day.

For dinner we all trekked up the hill to the Grasshopper Pub at the Pender Harbour Hotel. The view from up there is lovely, but we didn’t take any photos until we were back down at the dinghy dock.

We retired early to bed after an early morning start and will head to Squirrel Cove tomorrow!