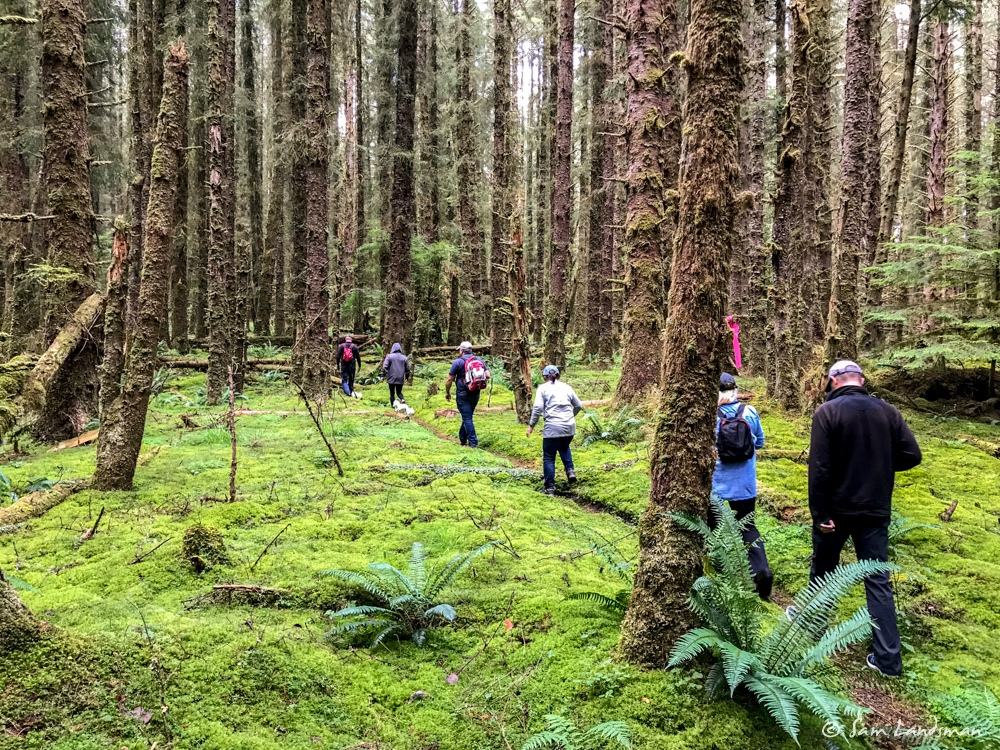 Before leaving Port McNeill, we studied the weather obsessively. We had a plan A, plan B, plan C, maybe even a plan D. Basically, it looked like we might have an opportunity to get around Cape Scott on Saturday (day 6). We’d anchor in Sea Otter Cove, then continue to North Harbour in Quatsino Sound the following day. When we went to sleep in Port McNeill, this seemed to be the best option.

When we woke up, the wind at Cape Scott was already blowing, but Sunday (day 7) now looked good! We went back to sleep and figured we’d depart a little later and head for Port Alexander to stage for rounding Cape Scott on Sunday.

Boats started departing Port McNeill about 8:00 a.m. for the 30 mile trip up Queen Charlotte Strait. The current was predicted to be against us, but it never materialized, and we enjoyed light winds and calm seas and…rain! It’s been a dry summer, and the rain was a welcome change of pace. We were anchored in Port Alexander on Nigei Island before noon.

Kevin and Ralph decided to go out for some fishing and had a very productive couple of hours. They were busy, and all in all caught 42 fish (!!!). They brought home four: one nice sized lingcod and three rockfish.

Sam took his drone up to get a few shots of our anchorage, and while exploring by air, he found a little cluster of floating buildings in a cove on the other side of the island in Browning Passage, so once the drone was down we hopped in the dinghy to go get a closer look.

We passed Kevin and Ralph on our way out and they decided to pull in their lines and follow us.

As we approached the cluster of floating buildings, a small fishing boat with a young man and woman aboard was just pulling away from the dock. We slowed to say hi and said we were anchored around the peninsula and out exploring. They nodded back toward the dock and the two people on the porch and said we should “go say hi to the girls” … which seemed, well, an odd way to address what appeared to be two grown women, but we’ll go with it.

The floating cluster of buildings is called “The Hideaway” and is a “resort” geared toward divers. This area is apparently great for diving, and you can see some cool underwater photos from the area here on their website: Browning Pass Hideaway Resort.

“The girls” are here as volunteers working for room and board (Julia, on the left is German but came from England and has been here a few days) and the woman on the right–whose name starts with a Z but that none of us could remember, so we’ll call her “Z”–is from Slovenia and has been here for three weeks. 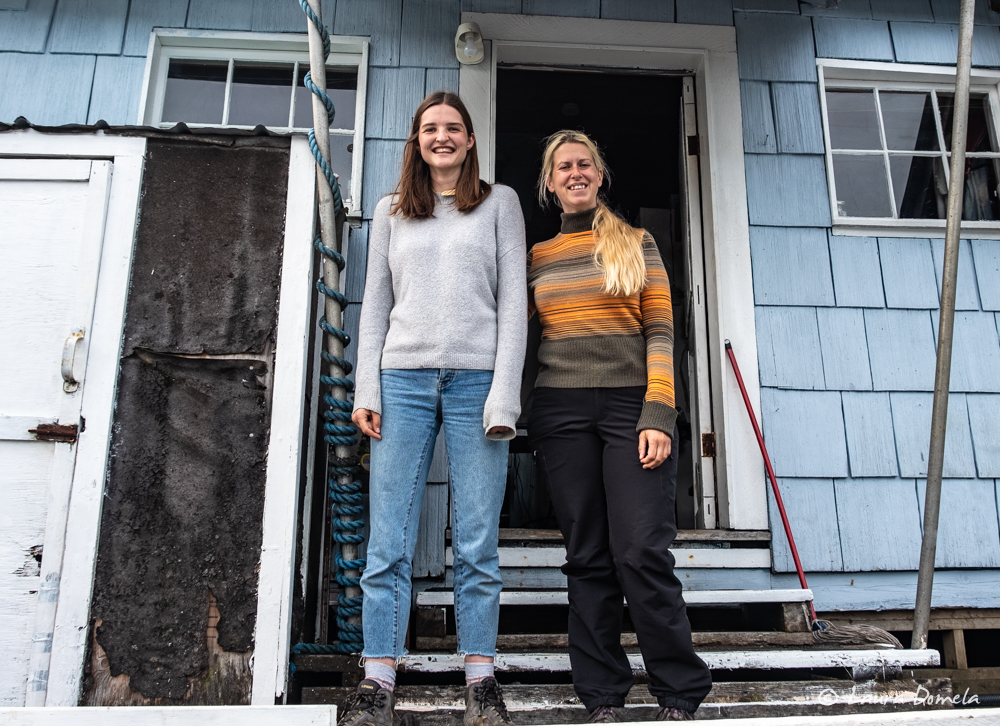 It turns out the fishing boat leaving just as we pulled in was there answering a distress call that Julia and Z made earlier on VHF16! About two hours before we arrived, they were in their cabin here and heard loud growling sounds outside the building. (They even recreated the sounds for us…several times!) They went outside to investigate, heard more loud growling (around the corner toward the sinking parts), got scared, and locked themselves in their kitchen and called for help. The folks on the fishing boat showed up, and they all walked all around the floating buildings making noise and looking for the source of the sounds, but no one heard or saw anything. After some tea and a little visiting, the fishing boat took off, and these ladies were again on their own, but only for a minute or two until we showed up. They kept saying “we promise we didn’t make this up.” We’re not sure why they were so worried about whether or not we believed them. Why would they make up hearing growling sounds, then call for help on VHF16? Just for company?

In any case, we walked around the buildings with them again and did not hear or see anything suspicious. They gave us a tour of The Hideaway, which includes a staff cabin, a handful of rooms for visiting divers, a main community building, and a bunch of dock sections in various levels of disrepair.

We said thanks for the tour and headed off in our dinghies. We diverted over to the nearby shore to check out what looked like some big rusted structure (turned out to be just a rust-colored piece of styrofoam float) and as we were idling, we heard what sounded like a loud growling sound over by the floats. (!!!) So we motored back over there and the ladies seemed extremely happy that we’d heard it too. But we heard it over the sounds of our idling outboards, so it was hard to figure out with any accuracy what the sound could have come from. 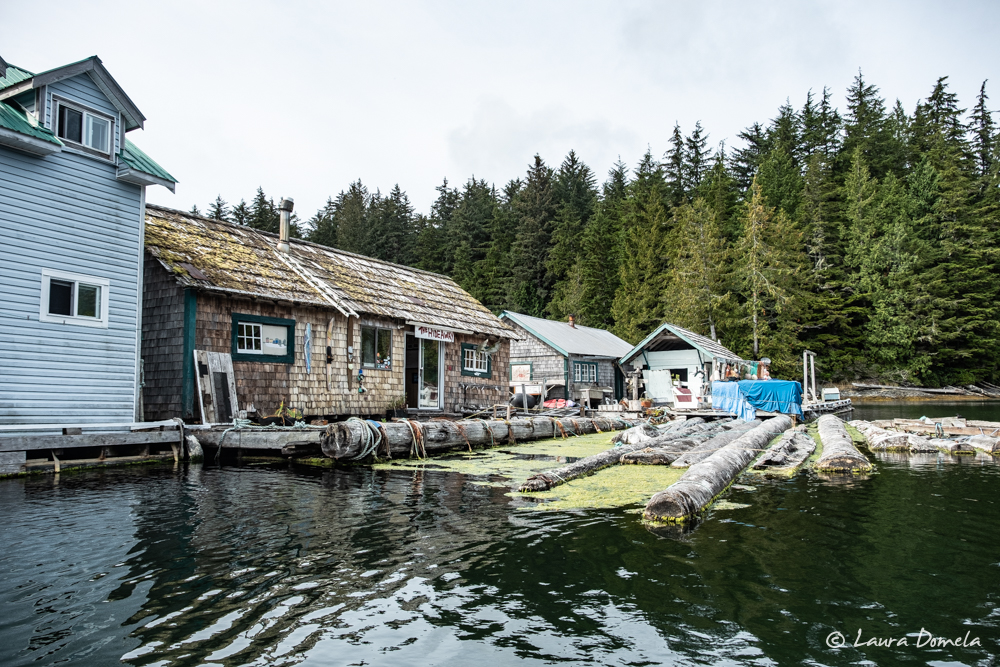 I wish we’d gotten a better photo of Z’s arsenal as she walked around looking for the source of the growling. She held an old shallow baking pan in her left hand, and a tiny metal hammer, held with two fingers in her right hand. And by tiny, we mean about 5 inches long, with maybe a 2-3 inch head…like something you’d play a kid’s xylophone with! (Turns out these tools were more for making noise than for protection.) 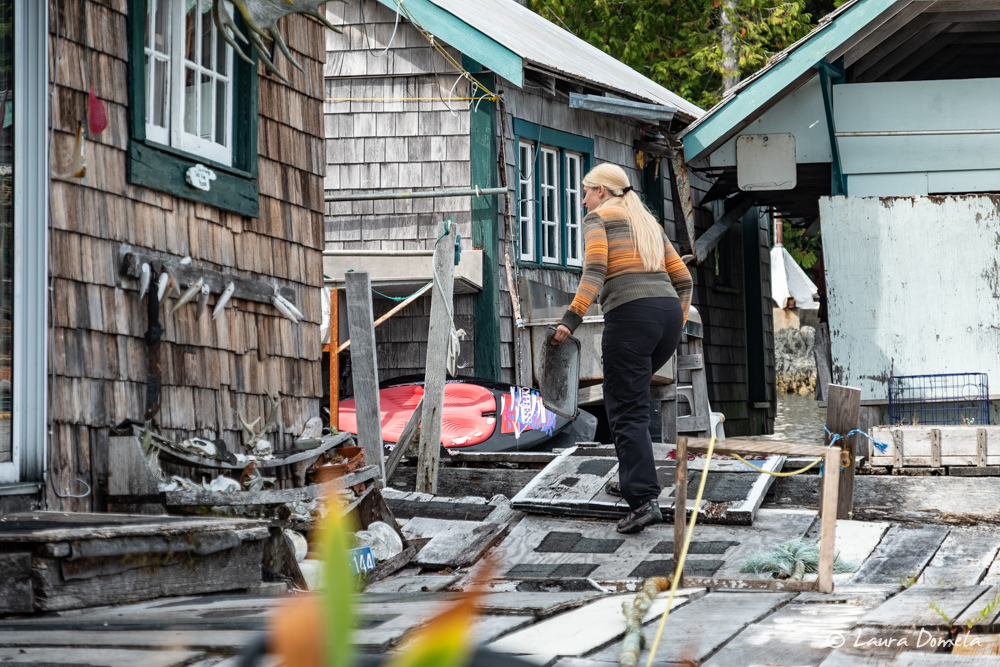 We sat for a bit in quiet, but didn’t hear anything again, so we said goodbye and left them on their own. Whatever it is, we don’t think it’s anything dangerous like a bear or mountain lion (after all, this whole thing they’re living on is floating, or partially sinking, but not attached to shore). Our guess is some kind of marine mammal underneath a section of the float. An otter, seal, sea lion….? Marten, mink? Dunno. But we think “the girls” will be okay. We told them to call us on the radio if they needed anything.

Back at our anchorage later on we gathered on the Airship/Safe Harbour raft for happy hour. Laura made black bean dip and some ceviche with the rockfish Kevin and Ralph caught, and others brought a variety of things to snack on: spanakopita, chips, salami and cheese….and we ended up turning happy hour into dinner once again.

Unfortunately, the weather window on Sunday disappeared. Fortunately, Port Alexander is a great place to spend a few nights! It’s scenic, has great protection, good internet (Rogers LTE with booster), there’s a short hike ashore, and the fishing is great!

The next morning Kevin and Ralph went out to see about scaring up some more fish, and came back with a couple rockfish and a big lingcod (35 inches!) 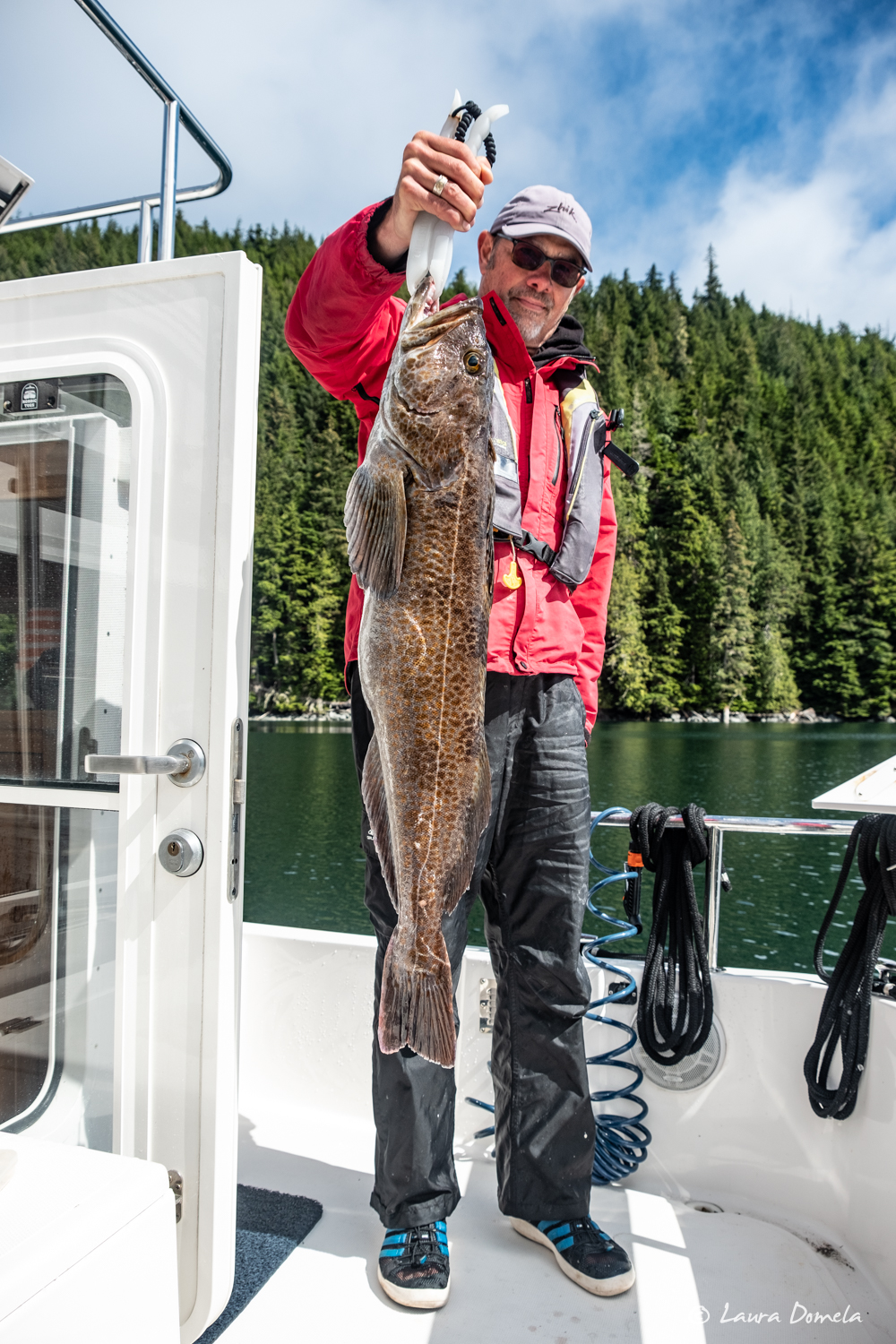 Sam went exploring in his dinghy and found this neat cave: 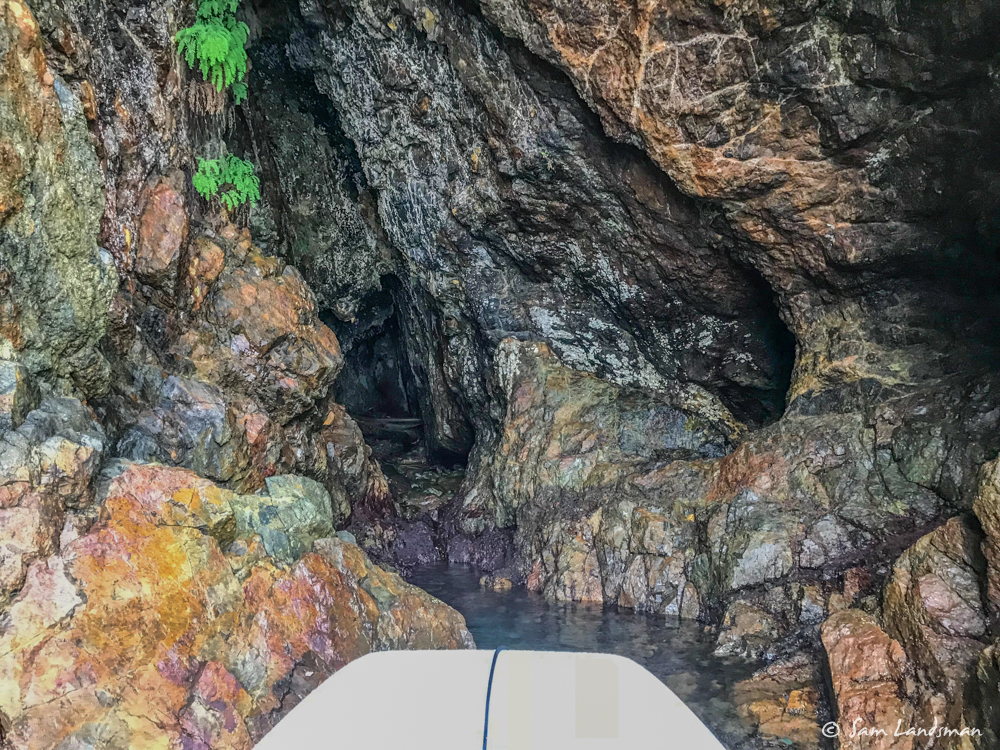 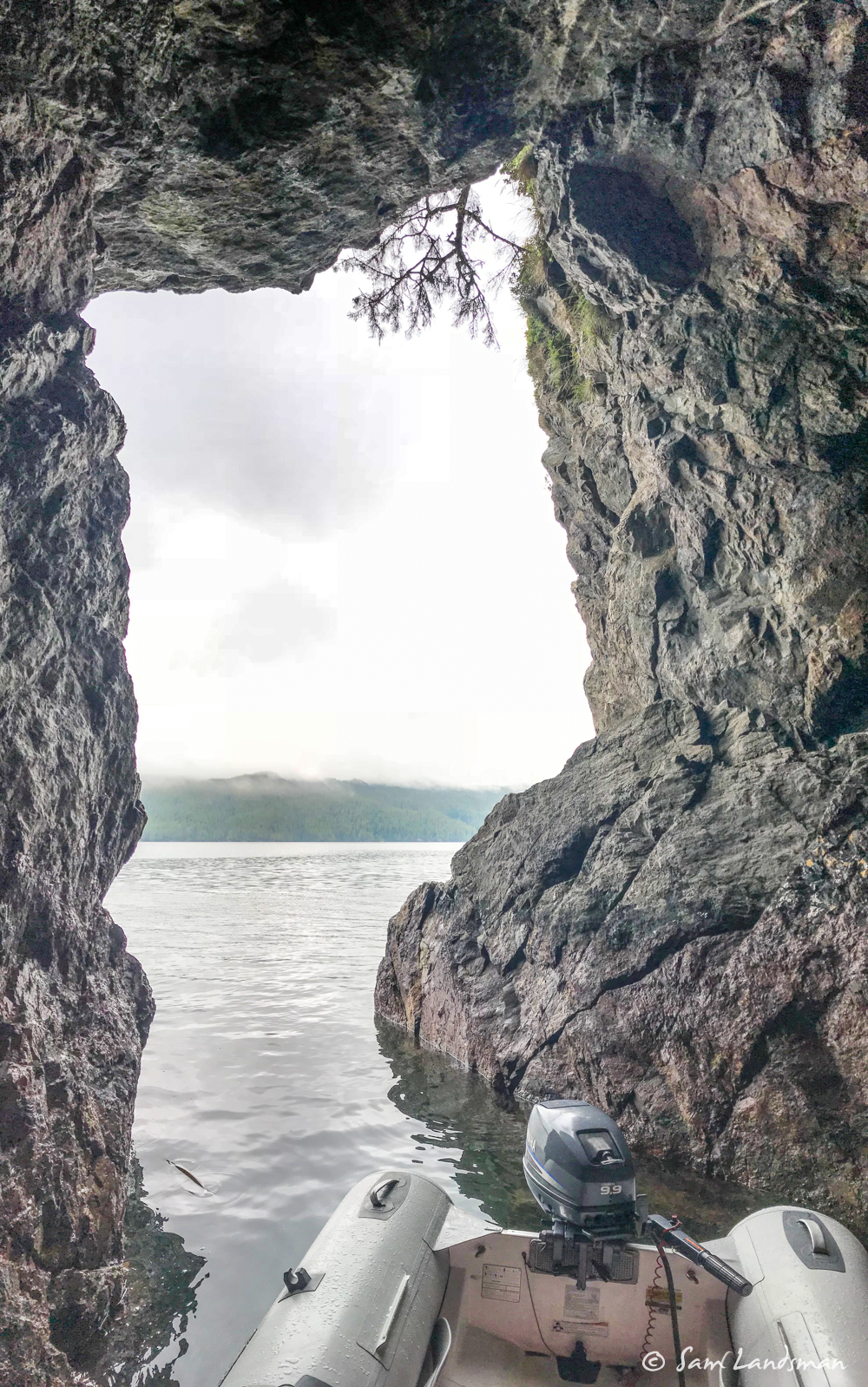 Later in the afternoon a bunch of us went ashore for a hike. There’s a primitive but fairly well-marked trail that leads through this lush forest across to the other cove.

Once we arrived on the other shore, Sam took his new tiny drone (a DJI Spark) up for a nice group shot:

Another shot of the Hideaway, with what appears to be some kind of oil leak flowing from it: 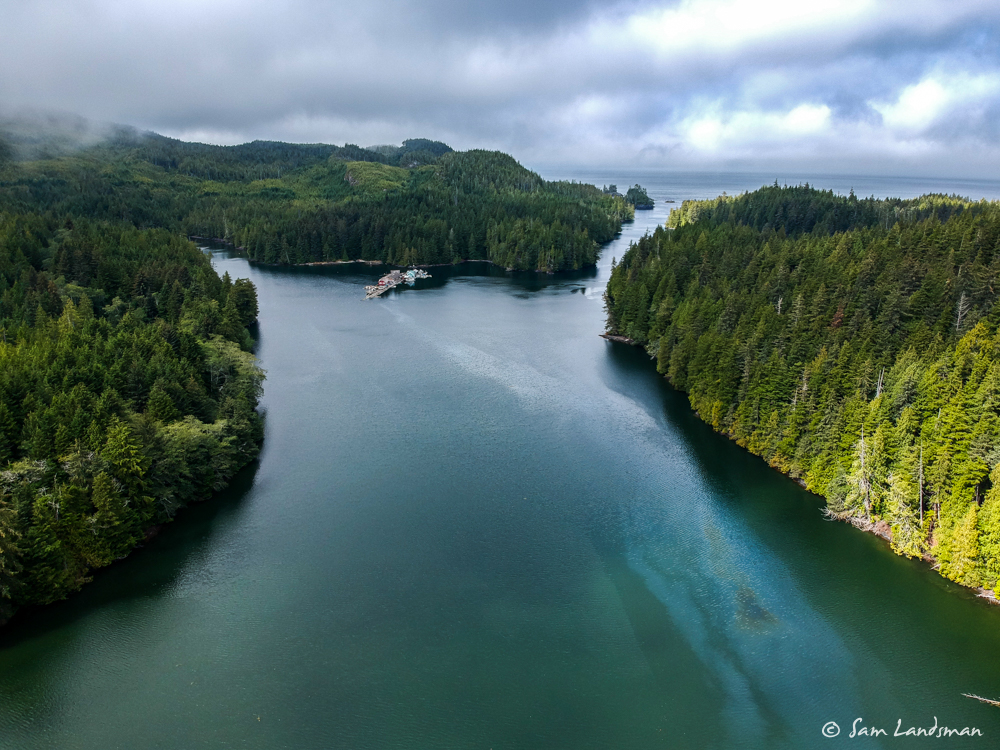 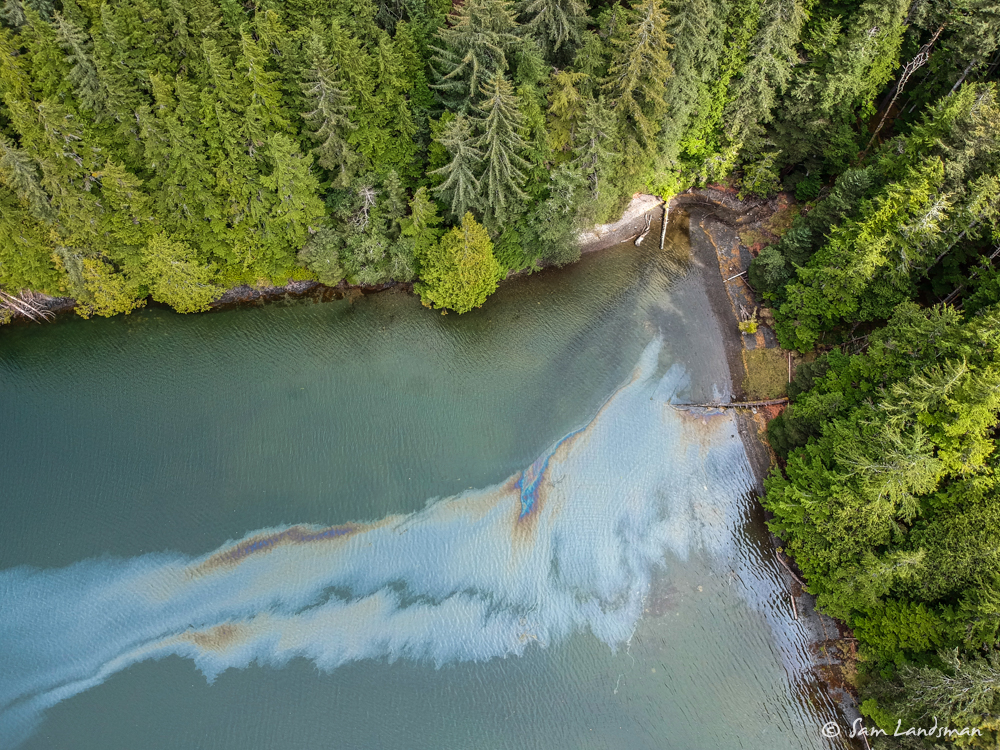 Back on the raft the group gathered for dinner: grilled lingcod, rice pilaf, Caesar salad, and roasted potatoes!