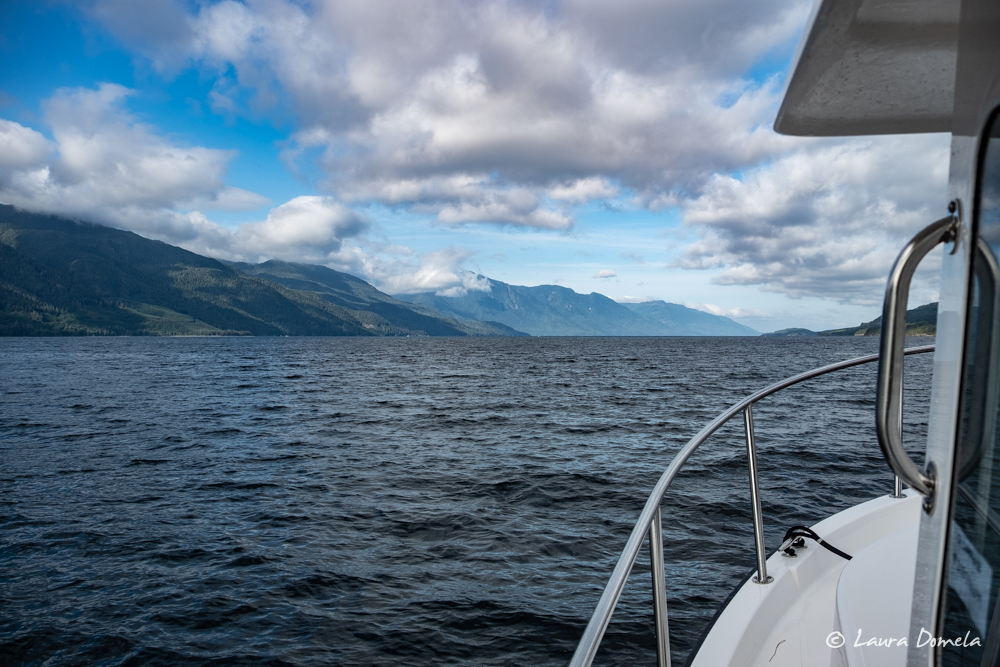 Johnstone Strait has a reputation as a difficult body of water. Current can run to four or five knots. Surrounding terrain funnels wind through. The challenges for a boater are to avoid beating into the current (which can greatly prolong your time in Johnstone Strait), avoid wind-against-current situations, and avoid traveling in the dark (too much debris in the water).

On a northbound trip, we want to ride the ebb as long as we can. But the summer northwesterlies create wind-against-current. Additionally, as the summer wanes, the days get shorter. A month ago, we could have left at 5:00 a.m., but now it’s not light until 6:00.

Based on the forecast, it looked like Johnstone might be bumpy, with northwest wind in the mid-teens, building to the mid-20s in the afternoon. The flood started in the wee hours of the morning and would run until about 9:30 a.m. We’d get a boost for awhile, but we’d have wind-against-current, and given the 54nm distance, we’d eventually get slowed way down by the flood (although we expected sea state to improve once the current and wind were moving in the same direction).

We decided to leave Forward Harbour when it was just light enough to avoid all the crab traps (about 6:00 a.m.). In our anchorage, it was blowing 15 knots.

Johnstone cooperated better than expected! At worst, we had two foot chop, a bit wet, but hardly bad. The flood we feared would slow us down seemed to arrive a bit late, and we only had to fight it for the last hour or so. Perfect!

We arrived in Port McNeill and made quick work of a few chores: laundry, groceries, fueling up, getting propane and dinghy gas, etc. We also met up with our last flotilla boat, a Nordhavn 47 called Epoch. North Island Marina was once again fantastic, catching lines as we arrived, bringing fuel hoses to each boat that needed diesel, and carting propane tanks from boats to be filled and back to boats. It’s always a pleasure to stay here.

We gathered for dinner at Sportsman’s Steak and Pizza House in the evening and discussed the plan for tomorrow. Based on the current forecast, tomorrow looks like the best day in the next several to round Cape Scott, but it doesn’t look great. Wind gusting around 20 knots on the beam for several hours means lots of rolling. Doable, but not the most fun. We’ll see what the morning brings, and we have several alternate plans in case the weather doesn’t cooperate…