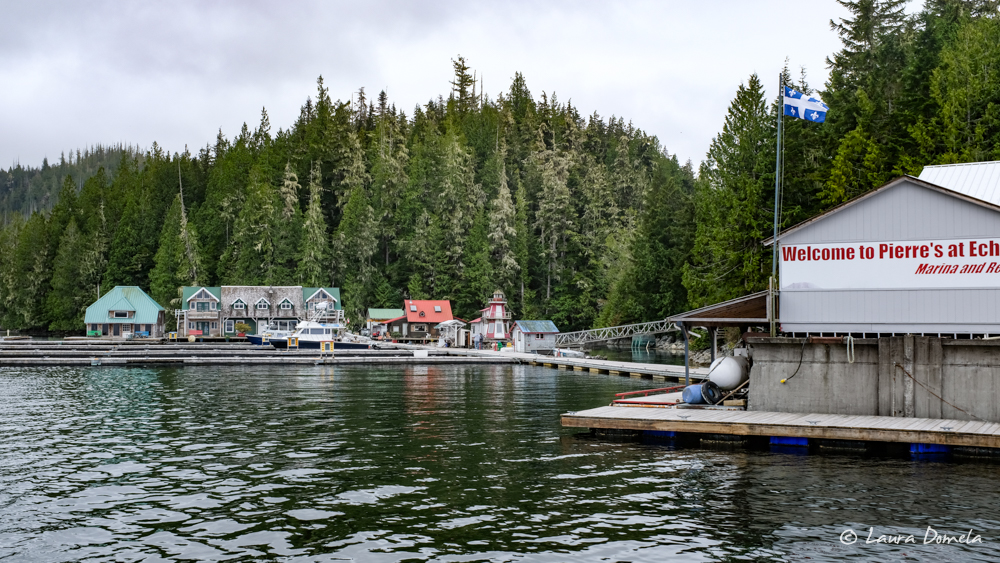 We awoke to very different weather than we’ve had: overcast, temps in the high 40s, and light mist. The wind was also blowing, still from the northwest but at 15-25 knots, building to 25-35 knots. Given the wind, we chose the “inside” route around the east side of Gilford Island to get to Pierre’s. This is a little longer than the “outside” route, but it minimizes time spent in Knight Inlet, which can get sloppy.

As we headed north in protected Chatham Channel, we had gusts to 20 knots. Out in Knight Inlet the wind seemed to slacken, and conditions were better than expected. Always a nice surprise!

Tribune Channel is beautiful, with tall mountains, waterfalls, huge cliffs, and bountiful forest. Lacy Falls is the most notable of the waterfalls, and this early in the season it had plenty of water: 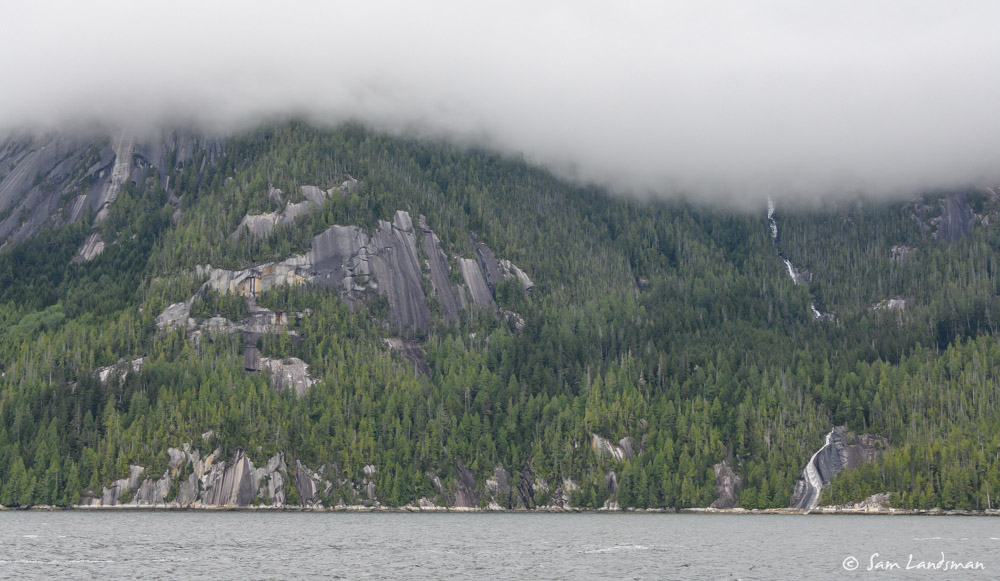 Pierre’s is an iconic stop on the trip to Alaska. Most flotilla participants have never made it as far north as the Broughtons, but they’ve all heard of Pierre’s. It’s fun to help people see places they’ve heard of for years, but never had the time or confidence to visit alone.

This time of year it’s quiet in the Broughtons, but that’s okay with us. 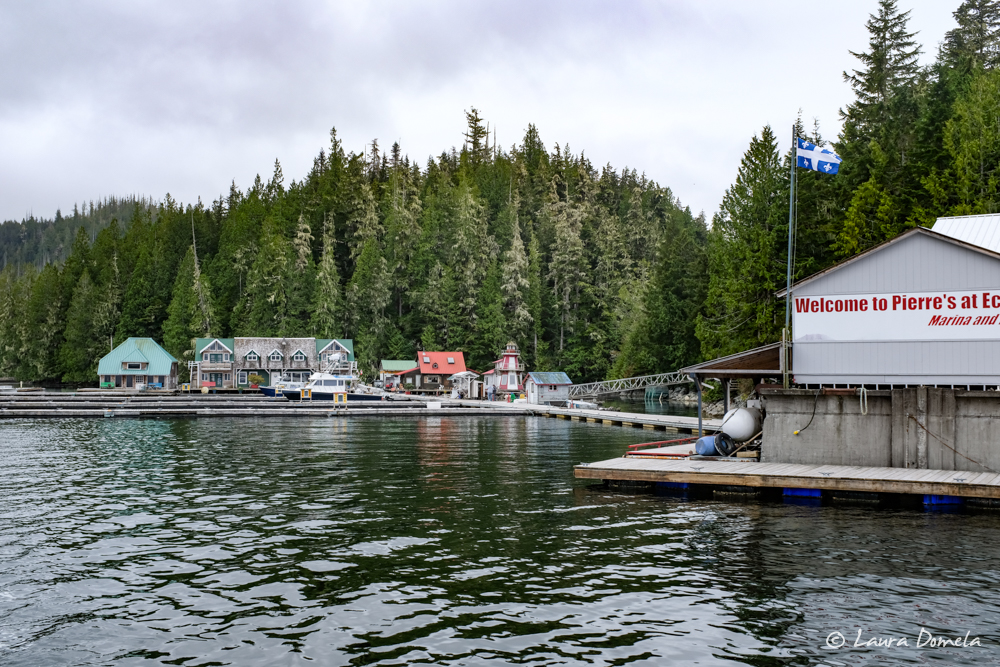 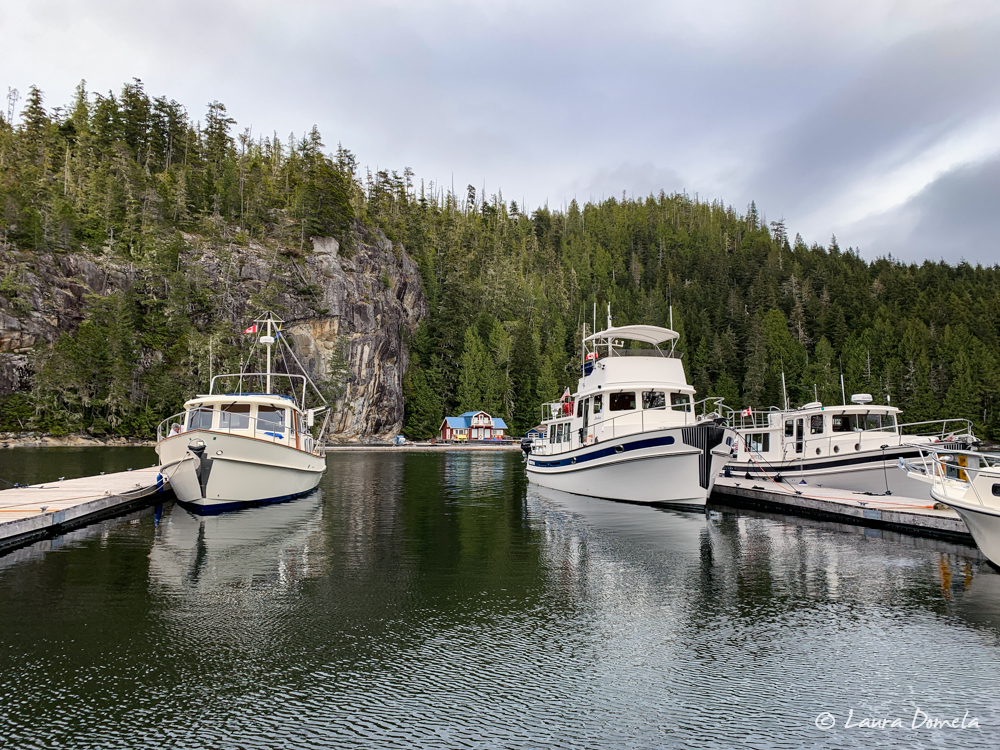 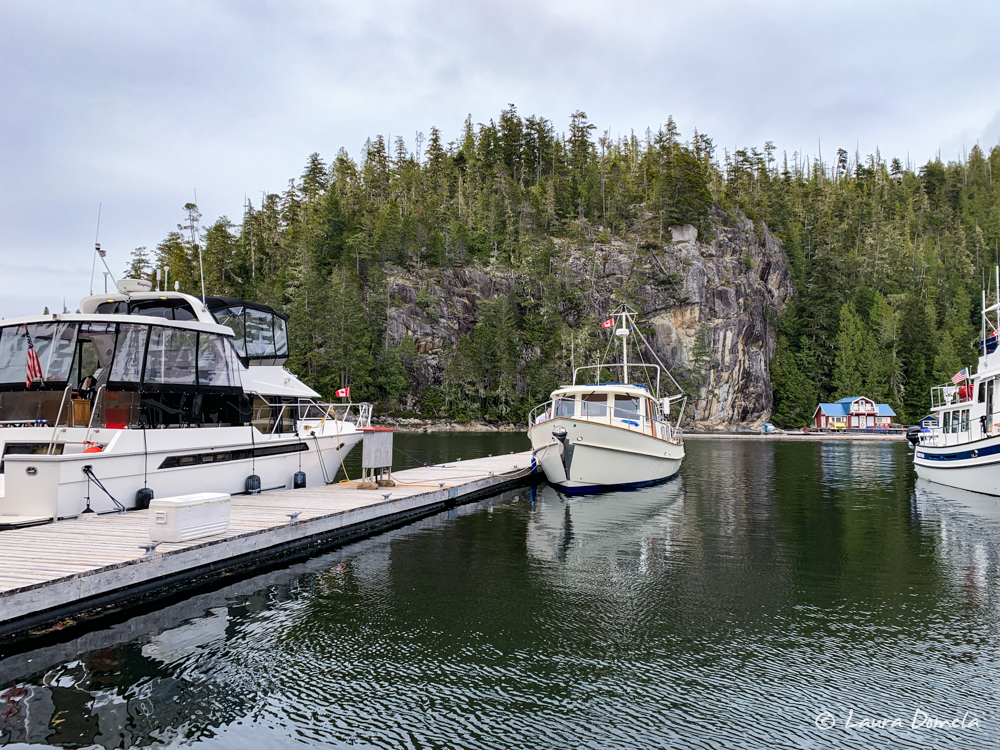 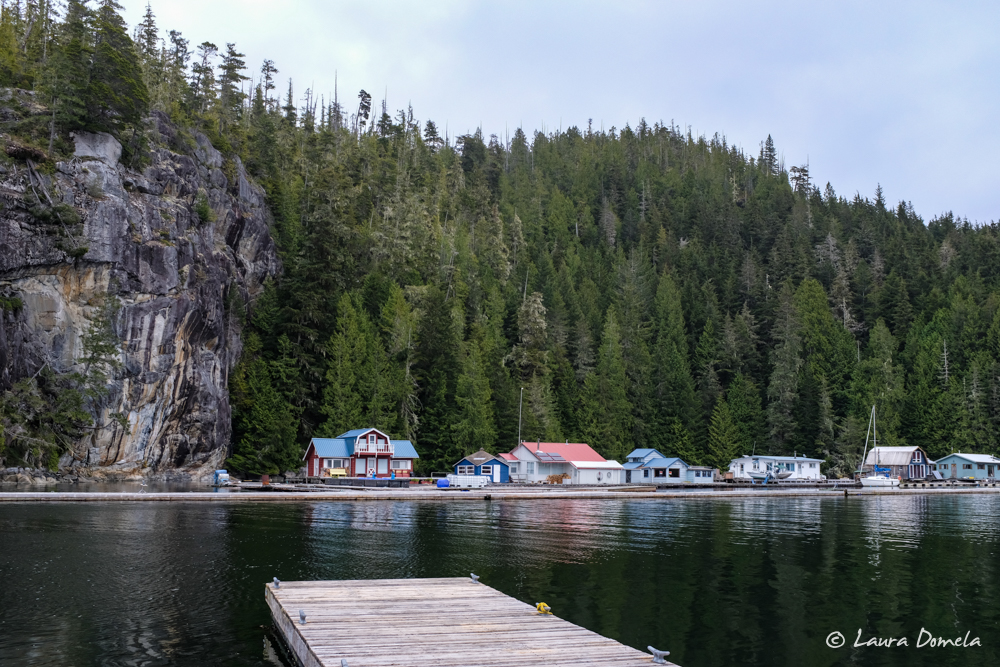 Echo is always so excited to greet boats (and boaters, and boat dogs especially) arriving in Echo Bay. 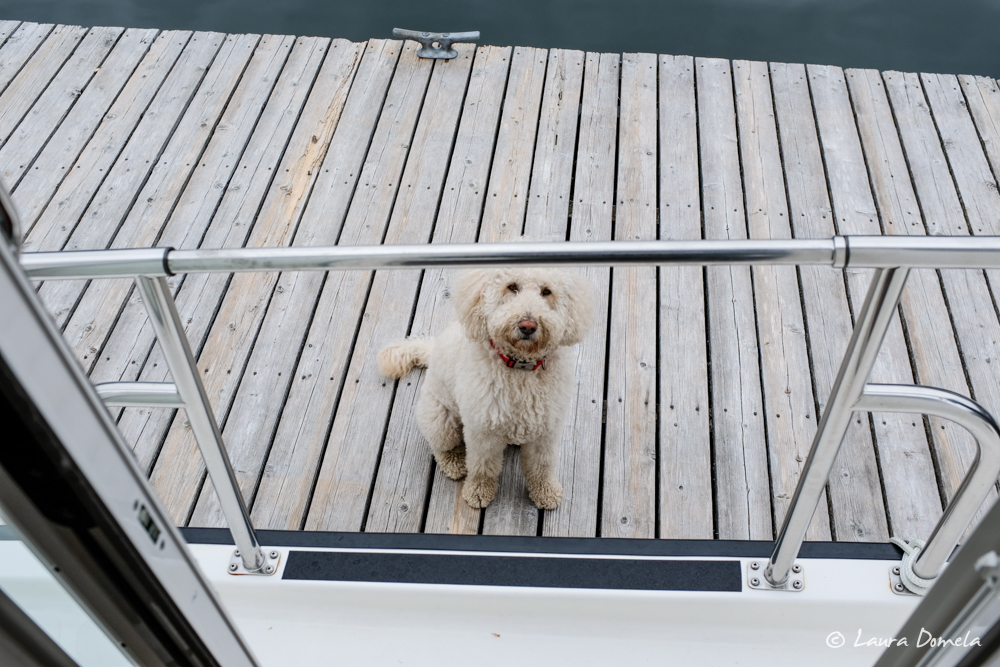 After a relaxing afternoon we gathered for a potluck in the dining hall. Pierre provided a delicious seafood chowder and the flotilla brought bread, cornbread, salad, rice pilaf, tortellini, brownies, and macaroons. We’re not starving! 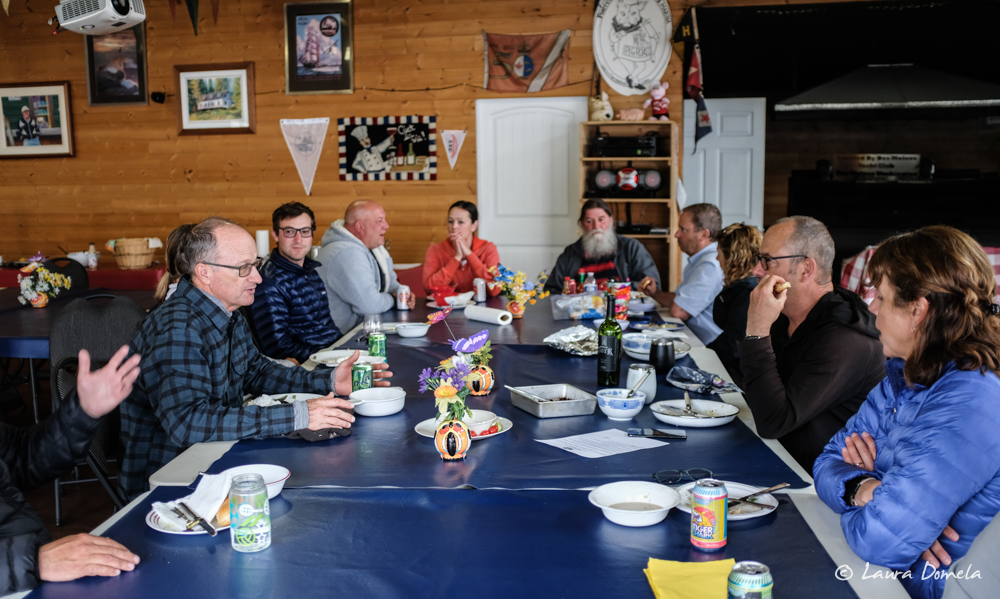 Meanwhile, aboard Airship, a mechanical drama had unfolded. A couple days ago, traversing Dodd Narrows coming into Nanaimo – right as we passed the lumber mills, we got a strong smell of cedar aboard. We assumed that we were smelling the timber products. After awhile, though, we noticed a different and more sinister cast to the odor. We dropped into the engine room to investigate, and found that the strongest smell was from the vicinity of the alternator. The alternator wasn’t working very hard at the time, and checking with our IR temperature gun, temperatures seemed normal. We decided to keep an eye on it.

The next day, leaving Nanaimo and with the alternator under heavy loads recharging the house batteries from the night before, the smell was back. With over 100A coming out of the alternator, we dropped into the engine room to find the alternator at around 325 degrees (they are rated for 200 degrees). Clearly, our alternator was on the way out. We started the generator to offload the alternator, and that worked – temperatures quickly dropped back into the mid-100s. However, we now knew we needed a new alternator.

We called ahead to Campbell River and ordered a replacement alternator to be delivered the next morning – but there was a catch. The deliveries typically arrived between 8 and 9AM. But, we needed to hit Seymour Narrows at slack, and that meant we absolutely had to be leaving the dock by 9AM. If we missed slack, we’d be waiting six hours for the next one, and we’d be fighting the flood up Johnstone Strait, rather than riding the ebb (about 3-4 knots much of the time). The net result would have put us as much as 8-10 hours behind the group and arriving in the dark.

Laura prepared the boat and Kevin waited at the parts store to make the dash back to the marina as soon as the part arrived. At about 8:30 the truck pulled up, and Airship was able to get underway by 8:45. No sweat!

That night in Boughey Bay, we set about changing the alternator. Getting the old alternator off was a simple, 10 minute job. But, there was another catch – we had to remove the pulley from the old alternator so we could use it on the new one. Apparently, the previous alternator had been installed by the Incredible Hulk, and nothing we could do would cause the nut to budge from the shaft. In desperation, we wrapped several laps of cut garden hose around the pulley to protect it, then clamped on it with a chain strap wrench. We put a large breaker bar on the nut and used a long handle (a kayak paddle handle) to put incredible leverage on the nut.

Nothing. The thing wouldn’t budge.

We contemplated using a torch to try more, but we decided it would be more prudent to wait until we were at dock with access to an impact wrench, rather than at anchor in a remote place. But, as we got ready to reinstall the old alternator, we noticed a much more serious problem. In trying to remove the pulley from the old alternator, we had damaged the pulley!

Why? Well, the pulley is required to reinstall the belt on the front of the engine. This belt also drives the cooling pump for the engine. No pulley, no belt, no go. Now, our slightly annoying problem had become a critical problem.

There is a lesson here. When doing repairs in remote locations, be very thoughtful about doing anything which could make your situation worse. There are probably more lessons as well – like “carry a spare alternator with a pulley already installed.”

We took some files and sandpaper and very gently cleaned up the area where the pulley was damaged, then reinstalled the old alternator. We figured it would do fine at least for the next day’s cruise to Echo Bay. During the cruise, we dropped into the engine room frequently to check on things. We checked that the belt was running smoothly, that the alternator wasn’t overheating, and we monitored the temperature of the belt with our IR temperature gun. We also shined a light on the ribbed side of the belt to be sure it wasn’t obviously wearing badly.

Arriving at Pierre’s, the belt and pulley were fine. We removed the old alternator, and with the aid of Pierre and an impact wrench, freed the pulley from the old alternator. Within a few minutes we had the new alternator installed (and even a little more cleaning up of the damage to the pulley). We test ran the engine and alternator for awhile at various loads, and all appears to now be well. We’ll continue to monitor things closely.

On toward Cape Caution!

A note – the stock alternators on most of these marine diesels were not designed for the kinds of loads we get charging house batteries. The sustained, heavy loads cause them to overheat and they fail frequently. We’re going to keep a close eye on this unit, and will probably replace it with a Balmar or similar alternator designed for sustained high current loads at low RPMs. 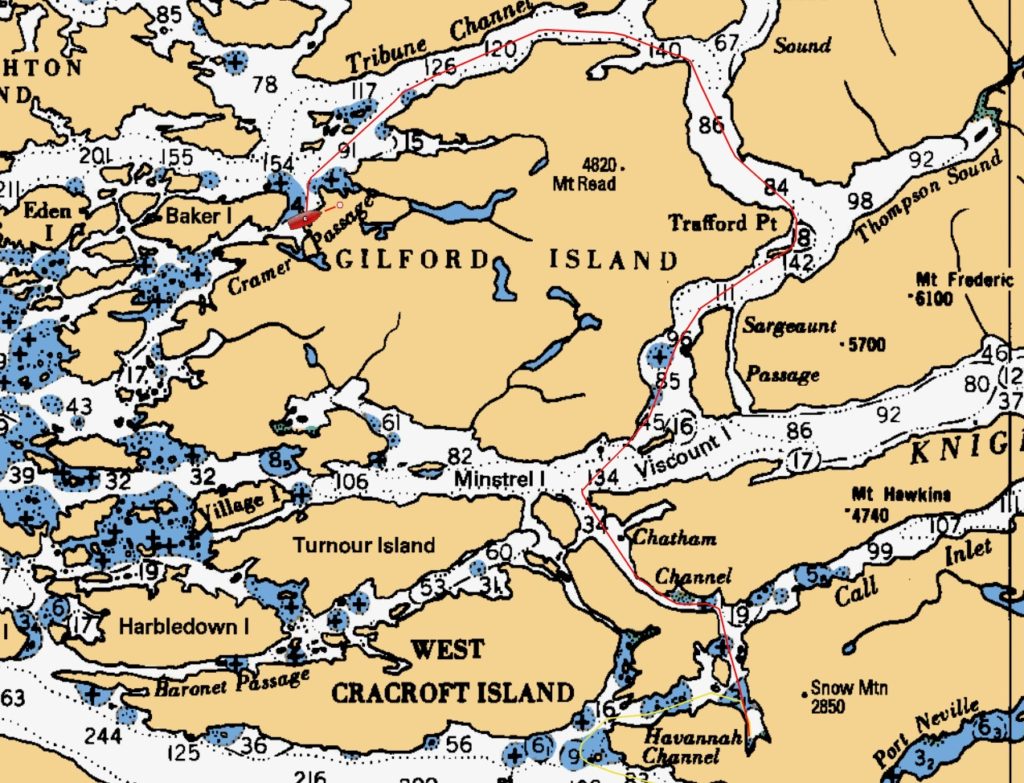