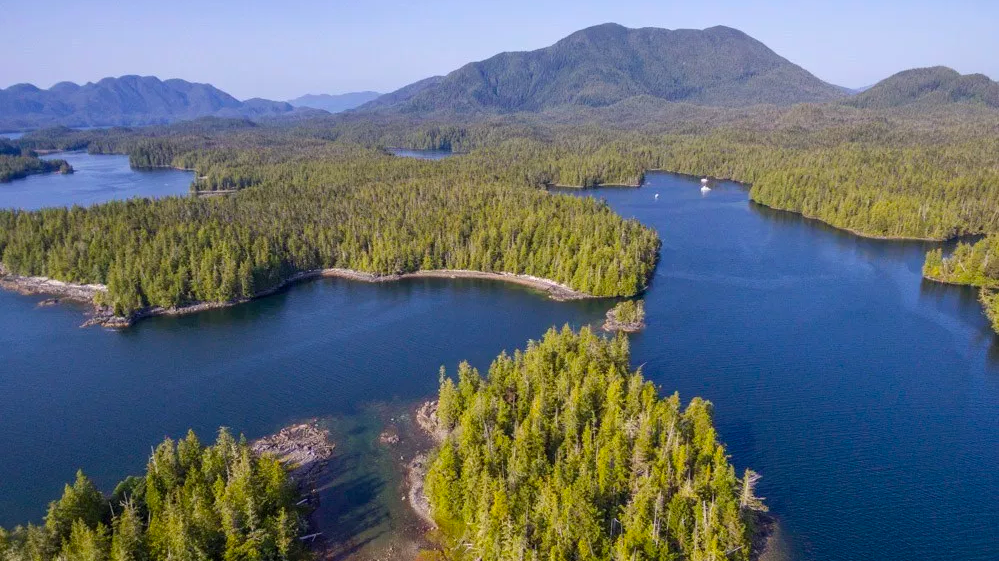 Our departure from Meyers Narrows Cove was dictated partially by the tide. The narrows have depths in the single digits, and with the tide falling we didn’t want to take any chances. We left about 6:30 a.m., with a 5 foot tide, and had at least 12 feet under the keel the whole way through.

We’ve been hearing rumors that Shearwater (the next scheduled stop where we can fill our water tanks) is having trouble with their filtration system and has no potable water at this time, so two of the boats who wanted water stopped at the native village of Klemtu. The guy on the fuel dock was super friendly and helpful and got everyone taken care of efficiently.

As we were cruising down Finlayson Channel, we noticed a line of pale pink all along the waterline on the rocks on our starboard side. It was a little too far to see with the naked eye, but with our long lens, we discovered it was heavily populated by starfish and anemones! We’re not sure what the pale pink is that covers the rocks, though. 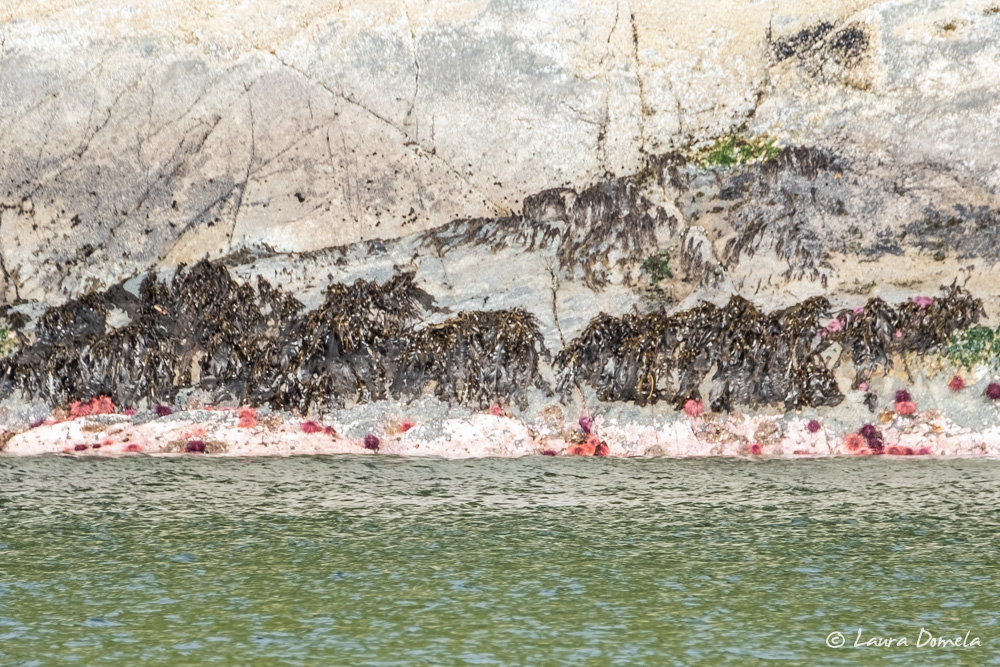 We’d originally planned on stopping for the night in Oliver Cove, which is right off Reid Passage. Oliver Cove is small, though, with room for just three boats. If anyone else was already there, there wouldn’t be room for us. And it’s exposed to wakes from boats transiting Reid Passage.

The guidebook didn’t mention anything about Lambard Inlet, just a mile or so north of Reid Passage. A little more digging revealed that until fairly recently Canadian Hydrographic Services hadn’t charted Lambard Inlet, so the cruising guides hadn’t bothered to include any information. Armed with the latest charts, though, we decided to give it a try. We anchored just before the narrows in about 50 feet of water with excellent holding. With a northwesterly wind, we got a little inflow breeze in the afternoon and current of perhaps 1.5 knots swept through the area, but it remained calm and comfortable.

It’s also an excellent base for exploring by dinghy. We visited Boat Inlet (we’d use it in the future, but entering/exiting seemed doable only during the upper half of the tide) and Oliver Cove before heading through Reid Passage to the head of Blair Inlet (which also looked like a good anchorage).

Back at the anchorage we took a drone up for some aerial overviews: 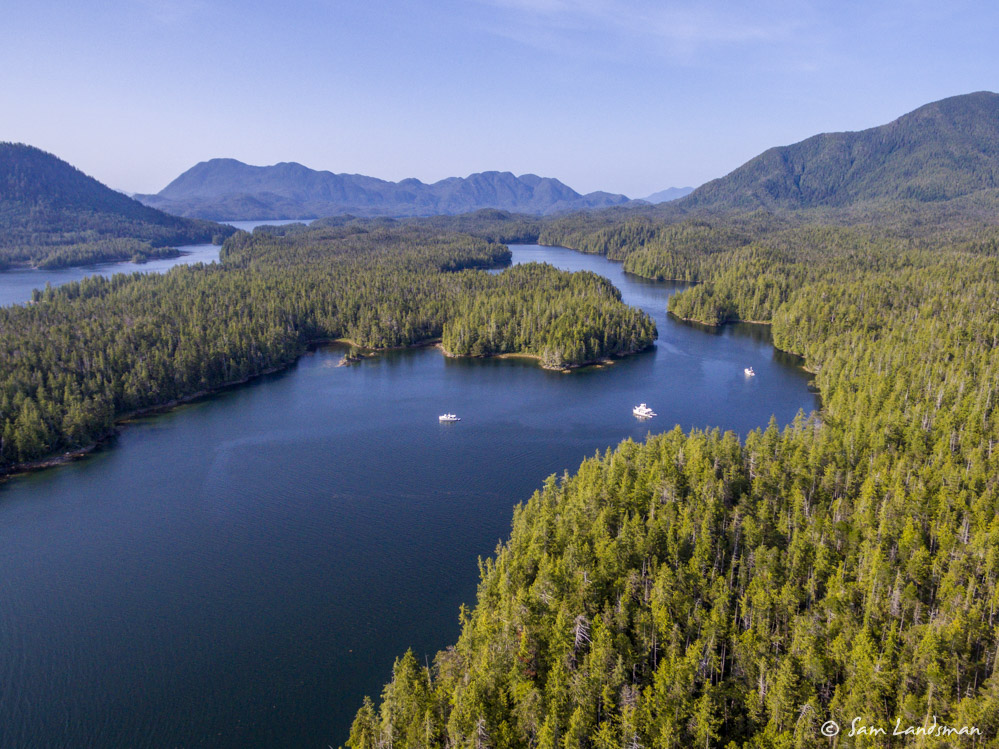 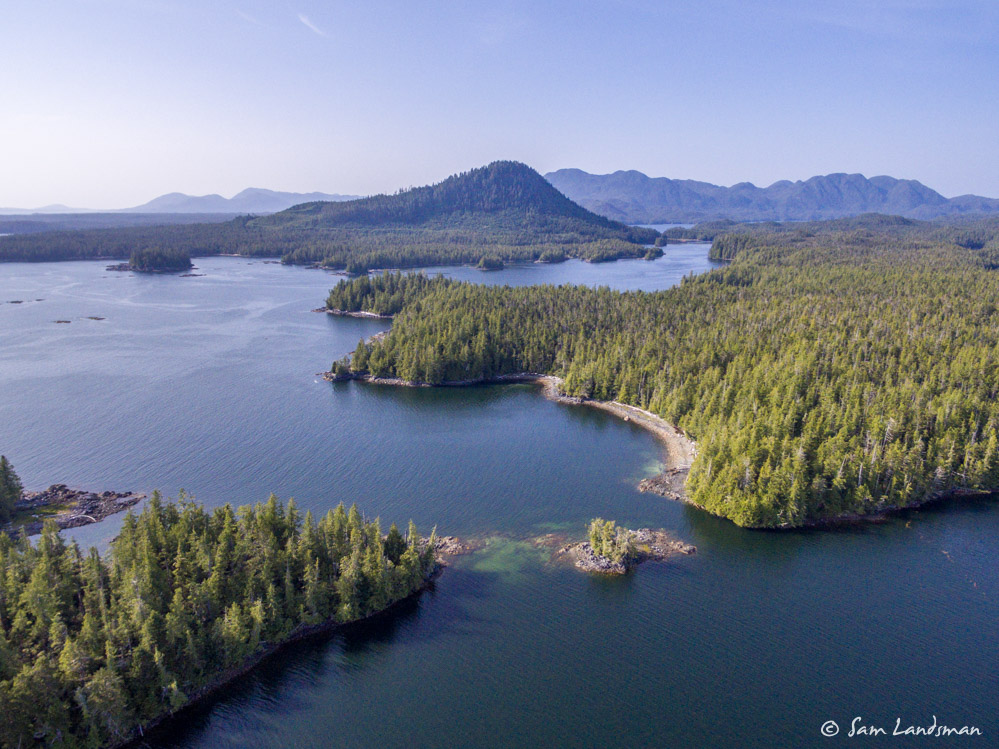 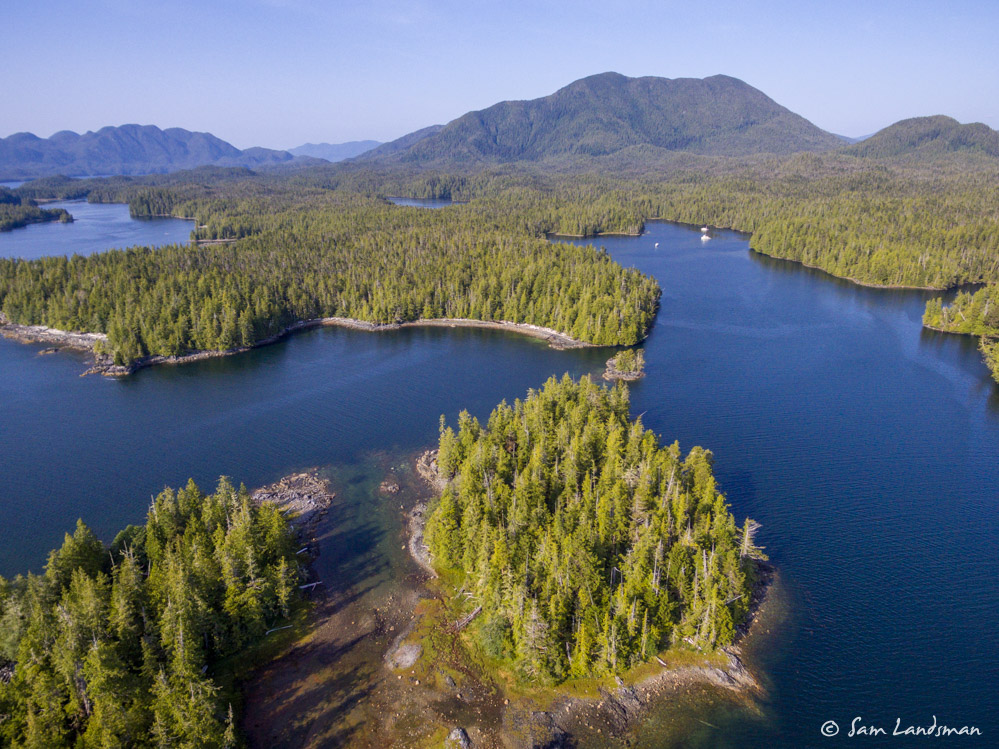 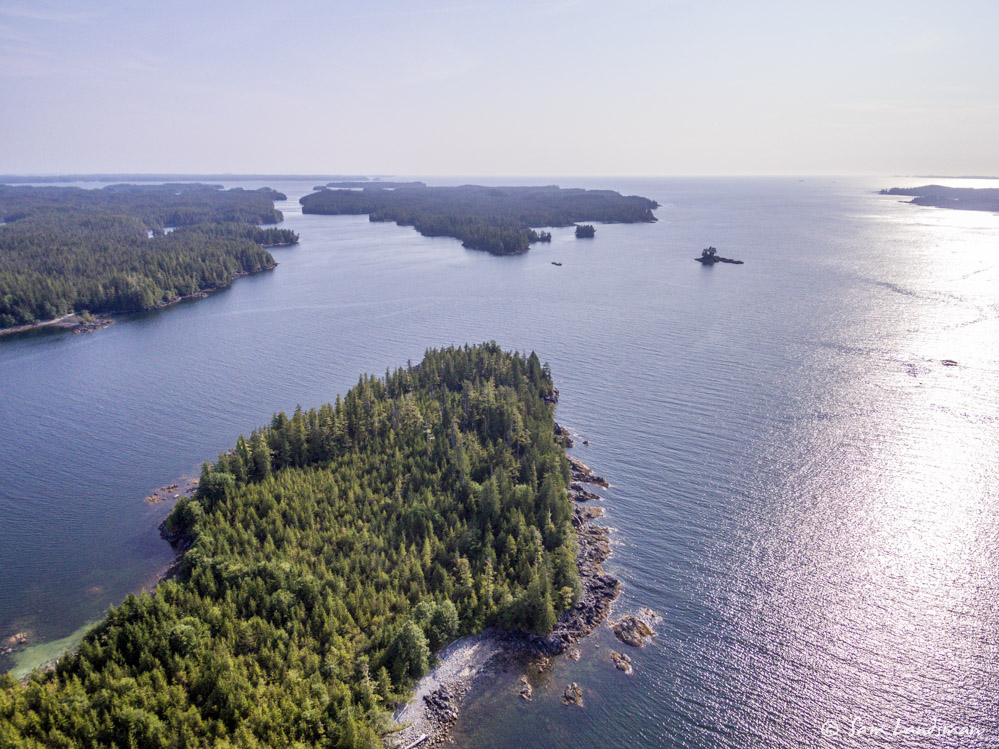 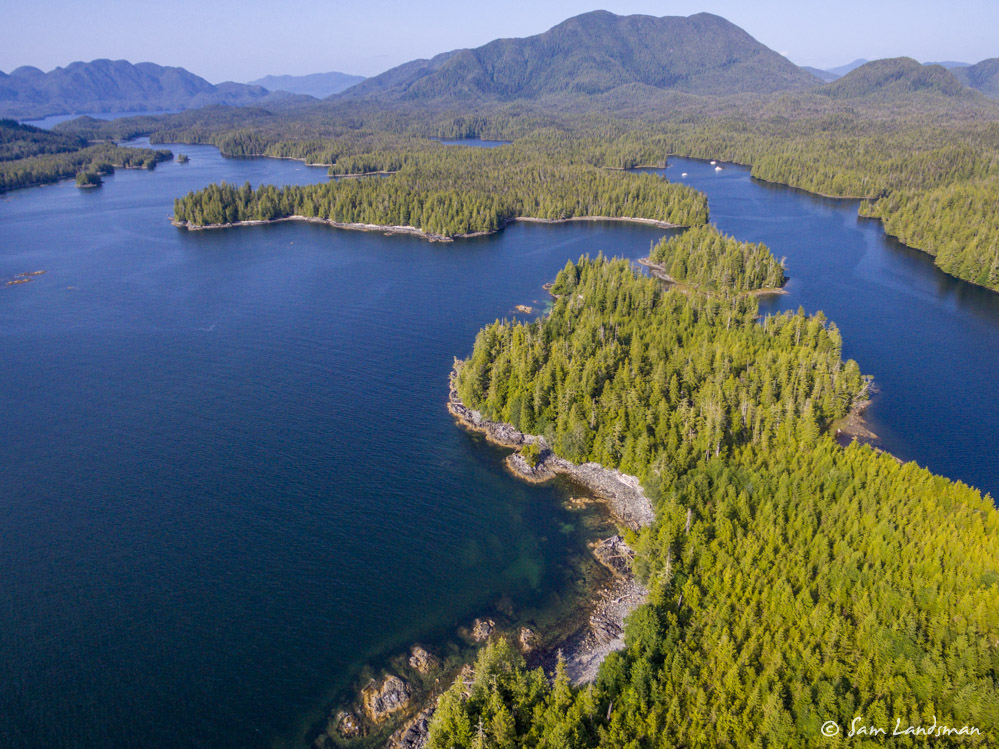 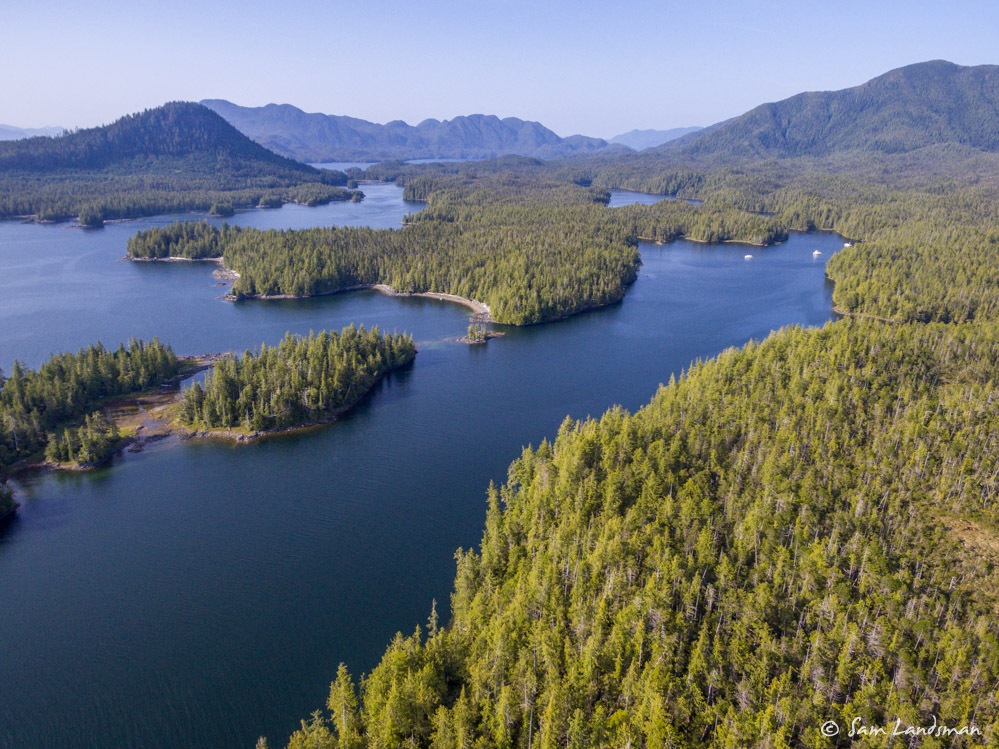 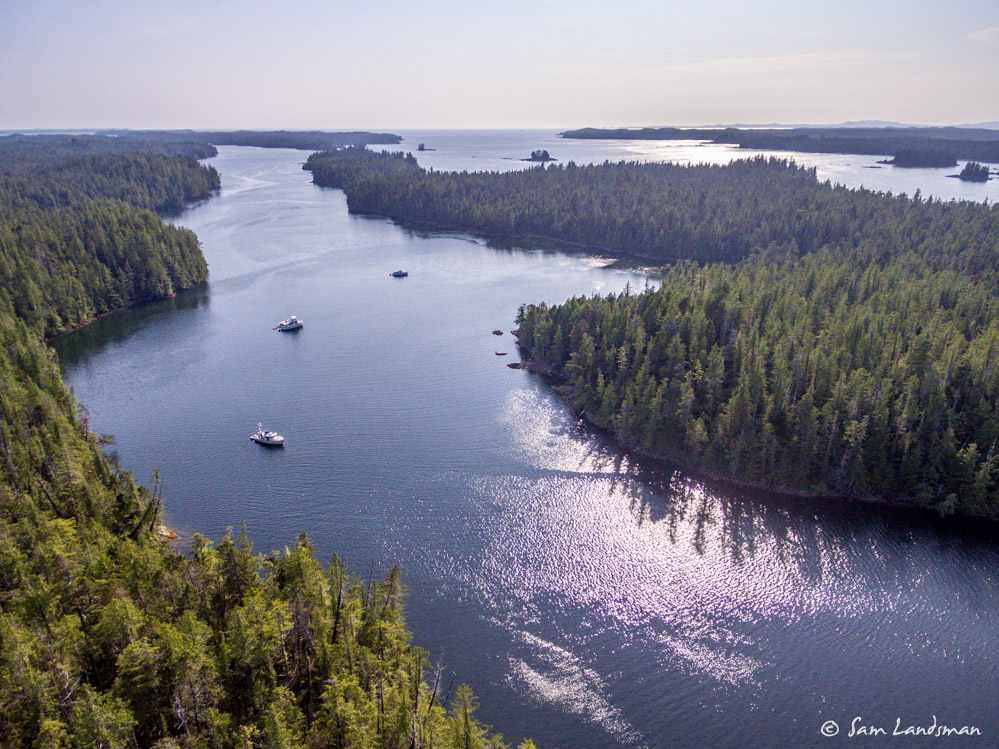 We met for happy hour to discuss the plan for tomorrow and the next several days. We’re going to Shearwater next to catch up on chores, then down to Pruth Bay, and then around Cape Caution. The weather is looking promising and we hope it holds! 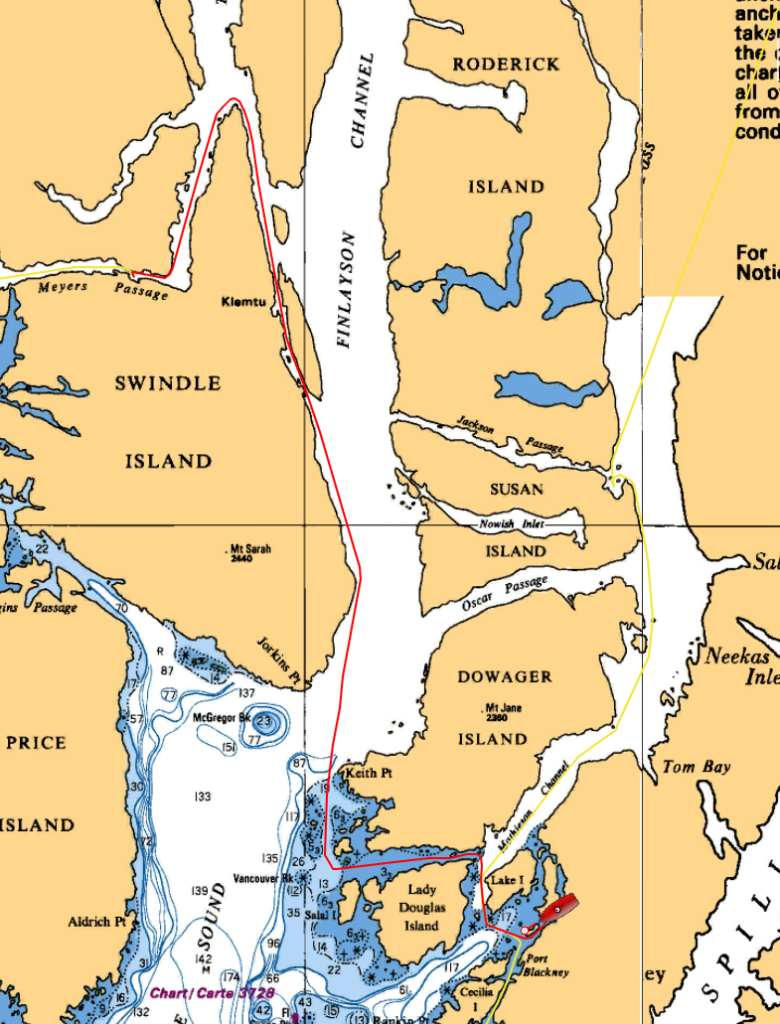