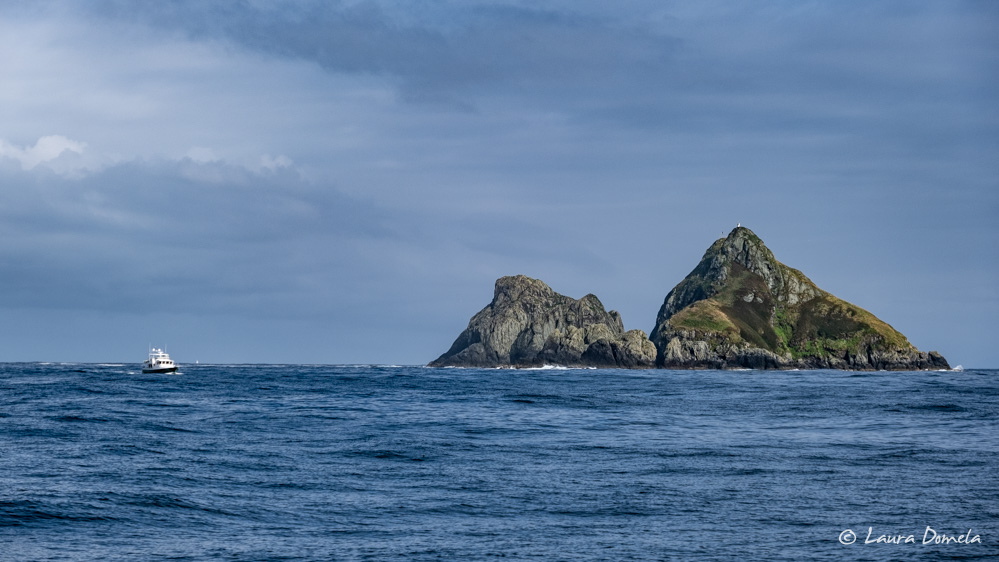 Around Brooks! This is one of the more significant milestones of the trip around Vancouver Island, and the weather has not been particularly cooperative this year.

Wind this morning looked ideal. The forecasts called for single digit speeds and the early morning observations at Solander Island and Quatsino Lightstation backed that up. Our concern, though, was the swell. The wind has been blowing for several days and it continues to blow not far offshore. Environment Canada predicted 3 meter swells. Other sources called for 6-7 feet at 8 seconds. If there’d been a better day in the near future we would have waited, but that wasn’t looking likely. Over the next few days the swell would likely calm down, but the wind was predicted to increase, making for more wind chop.

We left Winter Harbour ready for ocean travel and armed with Plans A, B, and C — depending on the sea conditions we encountered. If conditions were too unpleasant, we’d return to North Harbour or Winter Harbour. If they deteriorated as we rounded Lawn Point, we’d duck into Klaskish Basin. And if they were reasonable, we’d round Solander Island and head for Columbia Cove. 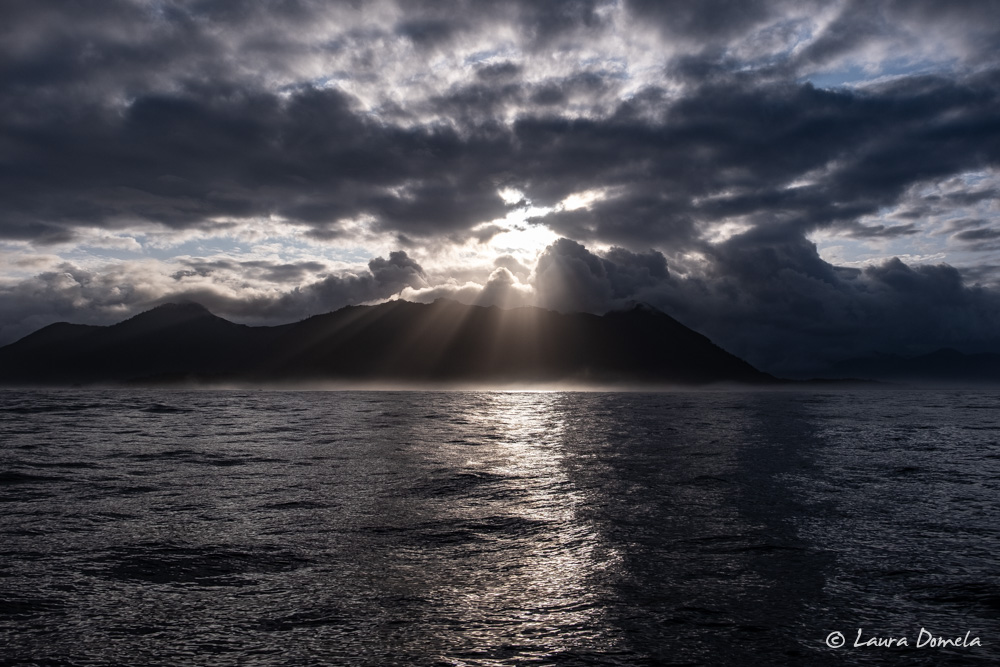 Crossing the mouth of Quatsino Sound was rolly, with big swells growing confused at times, but the wind was light and we continued towards Lawn Point.

The sea state improved slightly after exiting Quatsino, then grew confused again off Solander Island.  South of Solander Island the swells subsided (slowly), the skies brightened, and eventually the ride smoothed out. It wasn’t exactly a calm trip around Brooks, but it could have been a lot worse!

We arrived in Columbia Cove, dropped the anchors, and relaxed for a few hours. The sun peeked out a few times, and we took kayaks and dinghies out for some exploring. 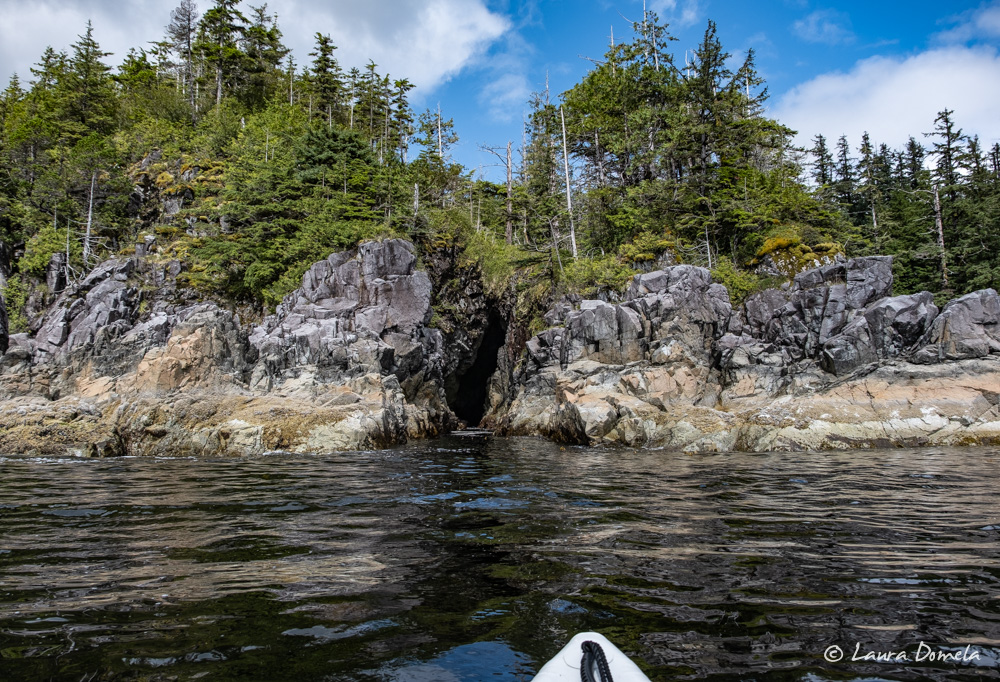 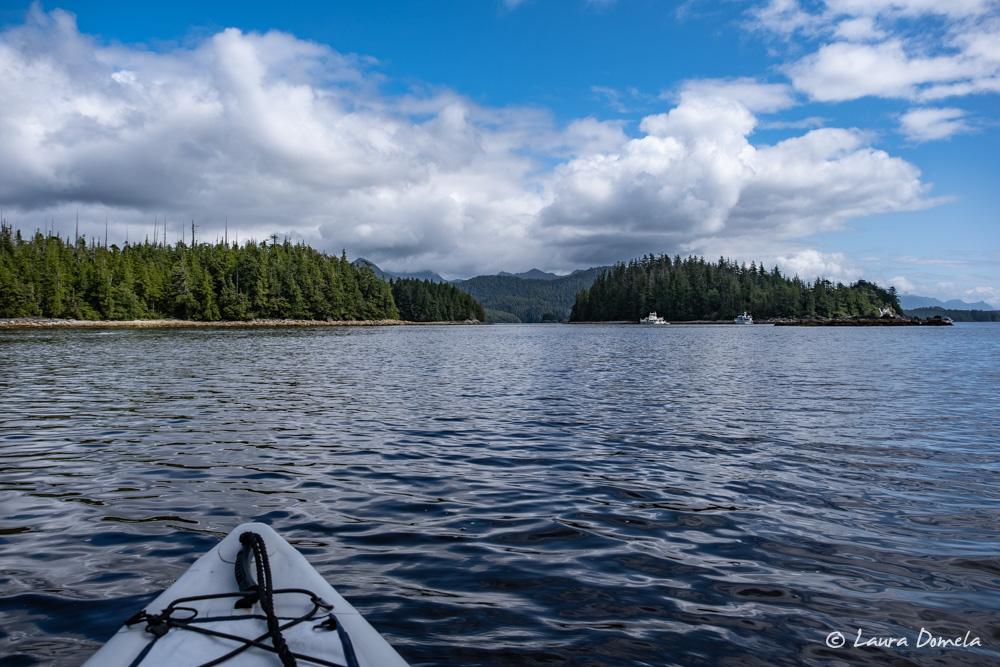 By mid-afternoon we were ready to go ashore and hike to the sandy beaches. The logistics of this hike can be challenging, since a large tidal flat can strand a dinghy. We went to shore on a rising tide, which meant landing the dinghies about half a mile from the trailhead.

While walking along the beach to the trailhead, we stumbled upon fresh bear prints. A hundred feet down the beach we heard something rustling in the trees. We made lots of noise as we walked and never saw the bear. 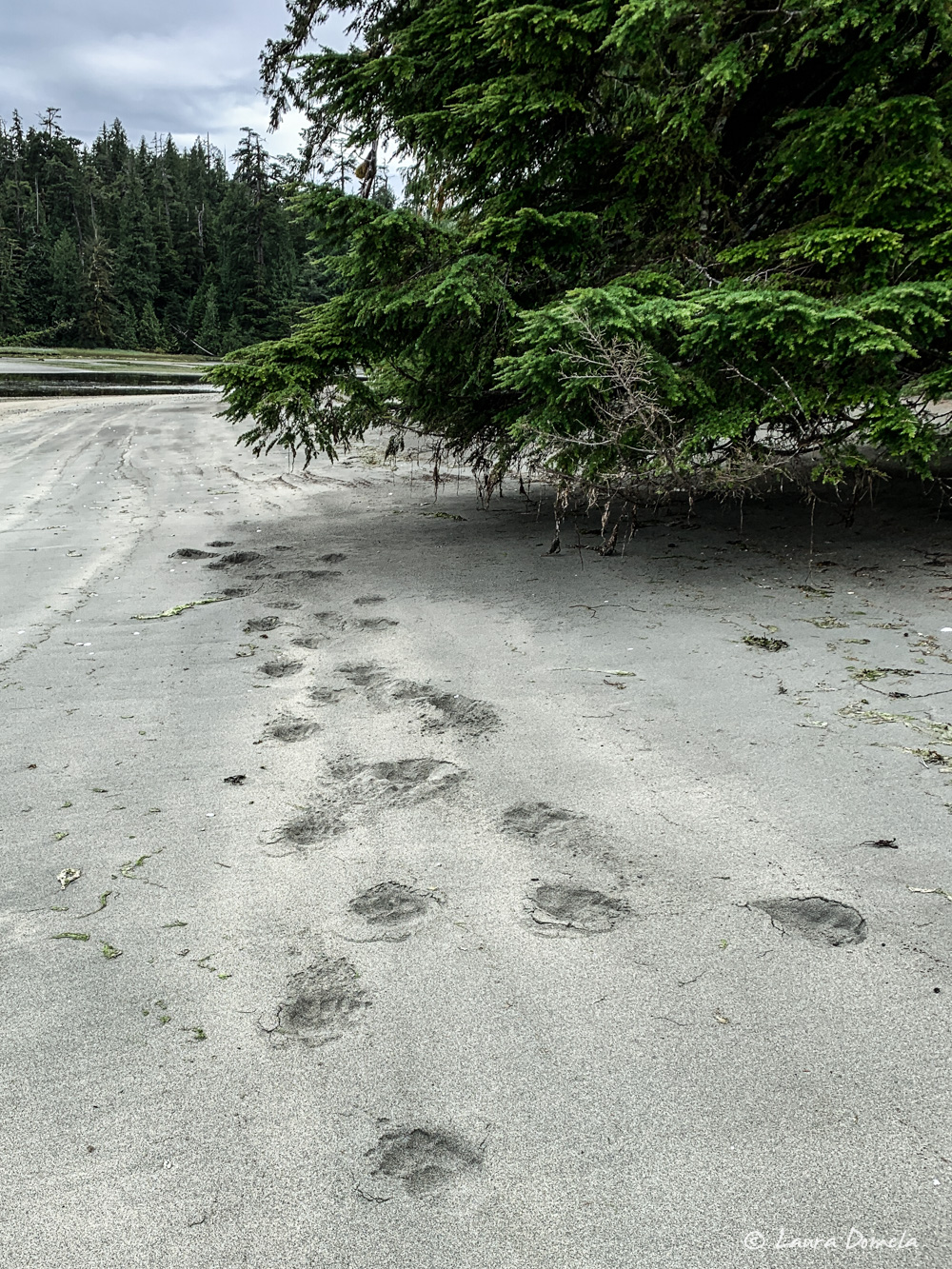 We emerged after the occasionally muddy hike through thick trees and ground vegetation onto the white sandy beaches on the ocean side. Always such a nice payoff! 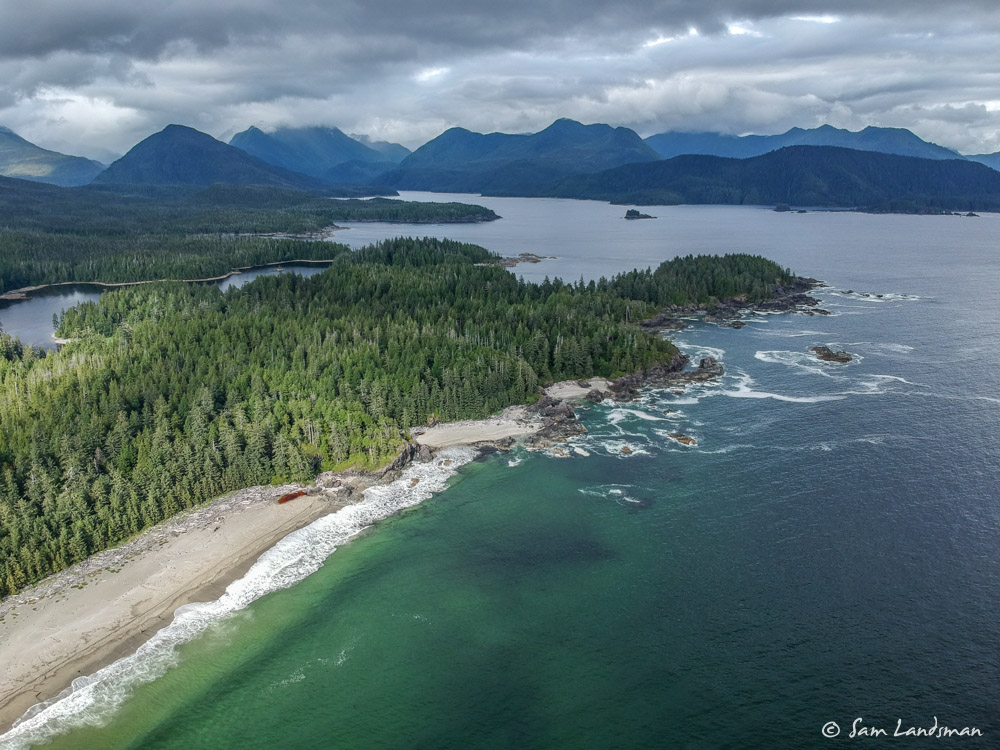 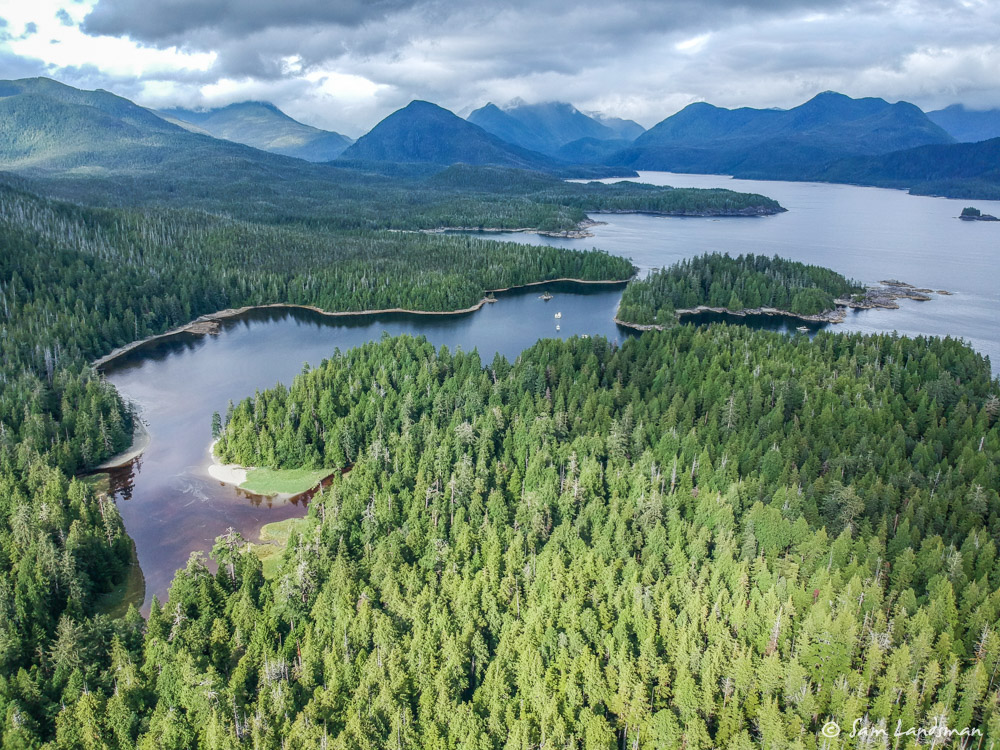 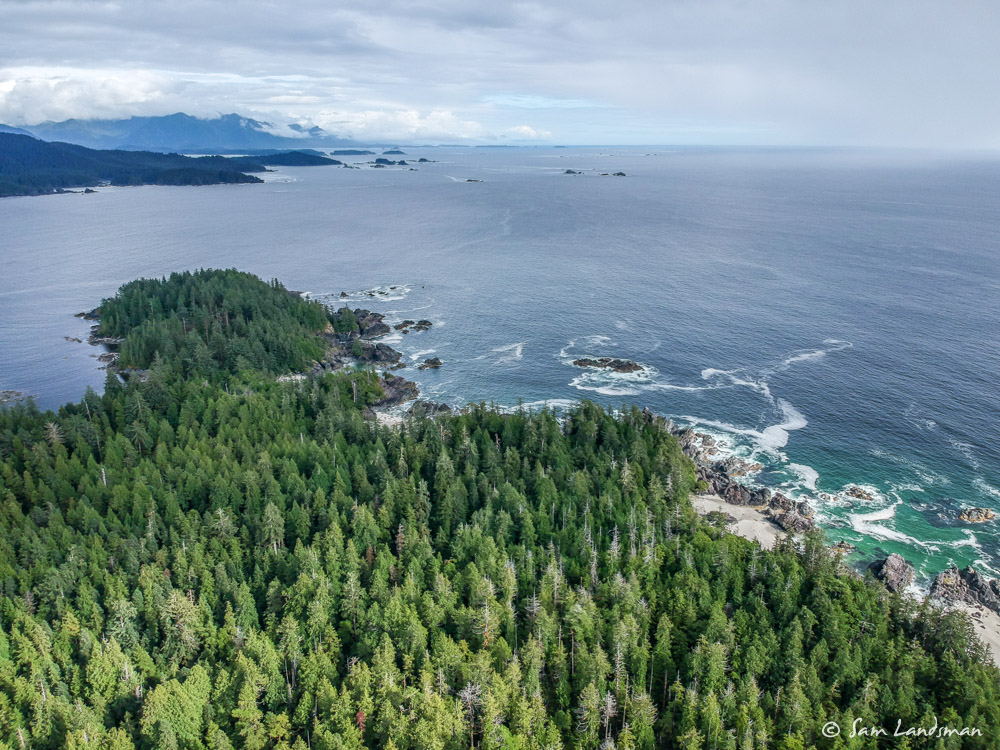 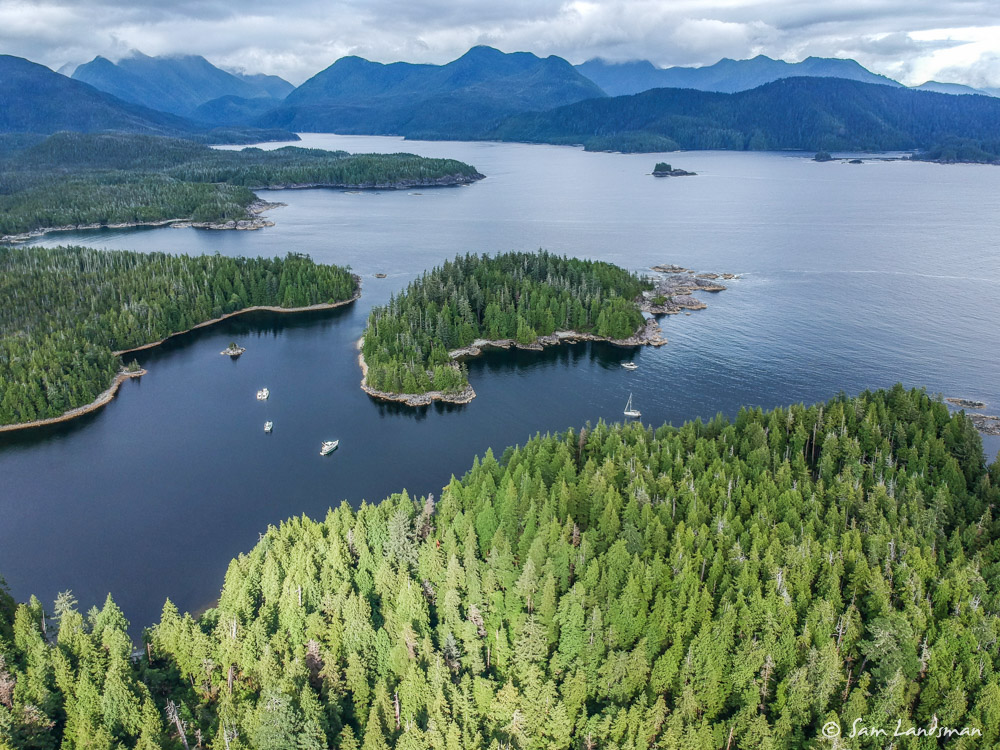 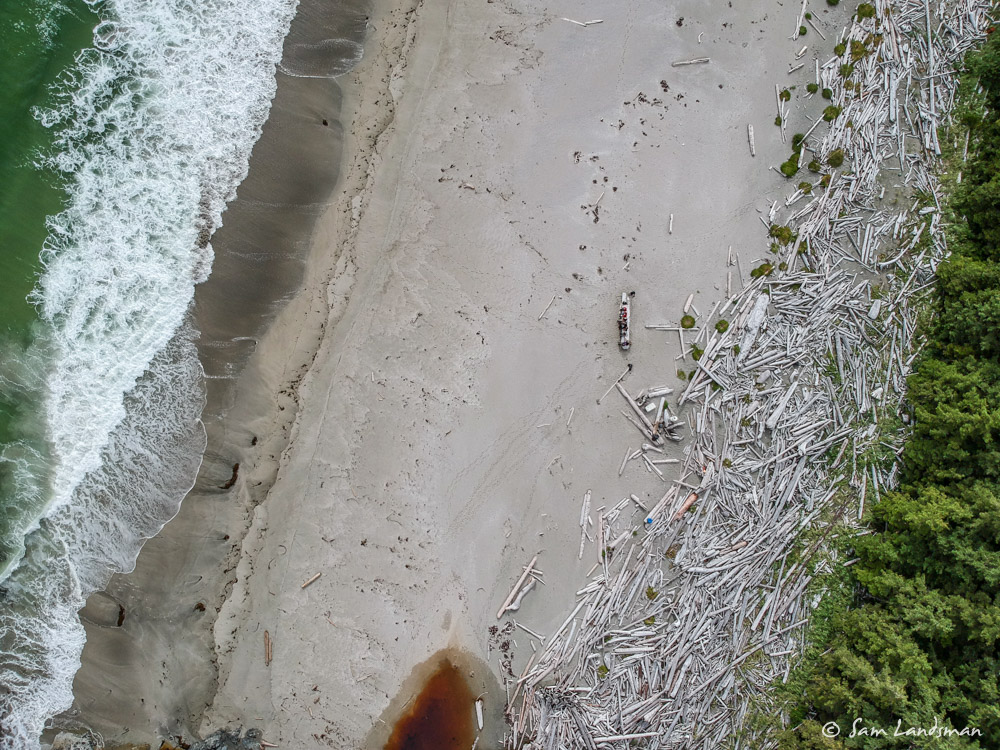 After a few hours of happy hour on the beach, we returned to the dinghies. The tide had risen about four feet. We could still walk to the dinghies and were glad we secured them above the high tide line!

Some of us went out for some further exploring by dinghy after the hike. 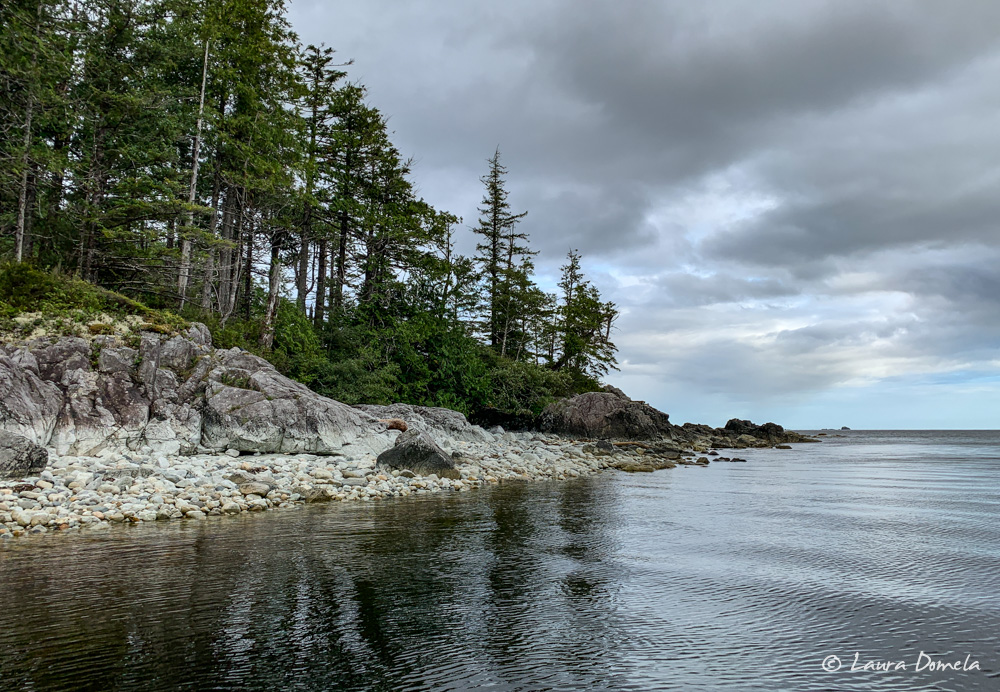 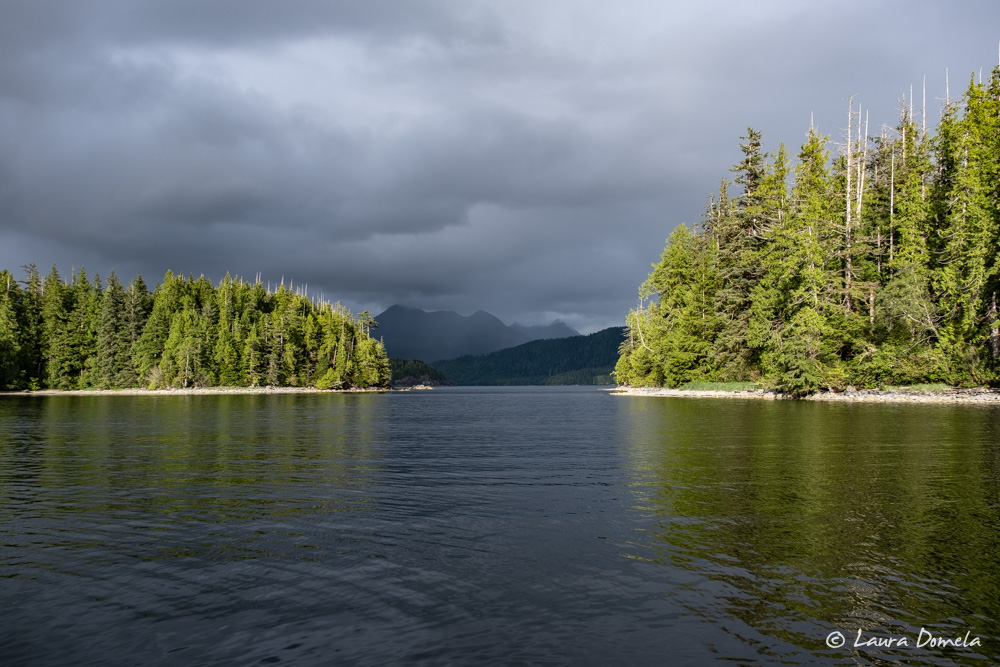 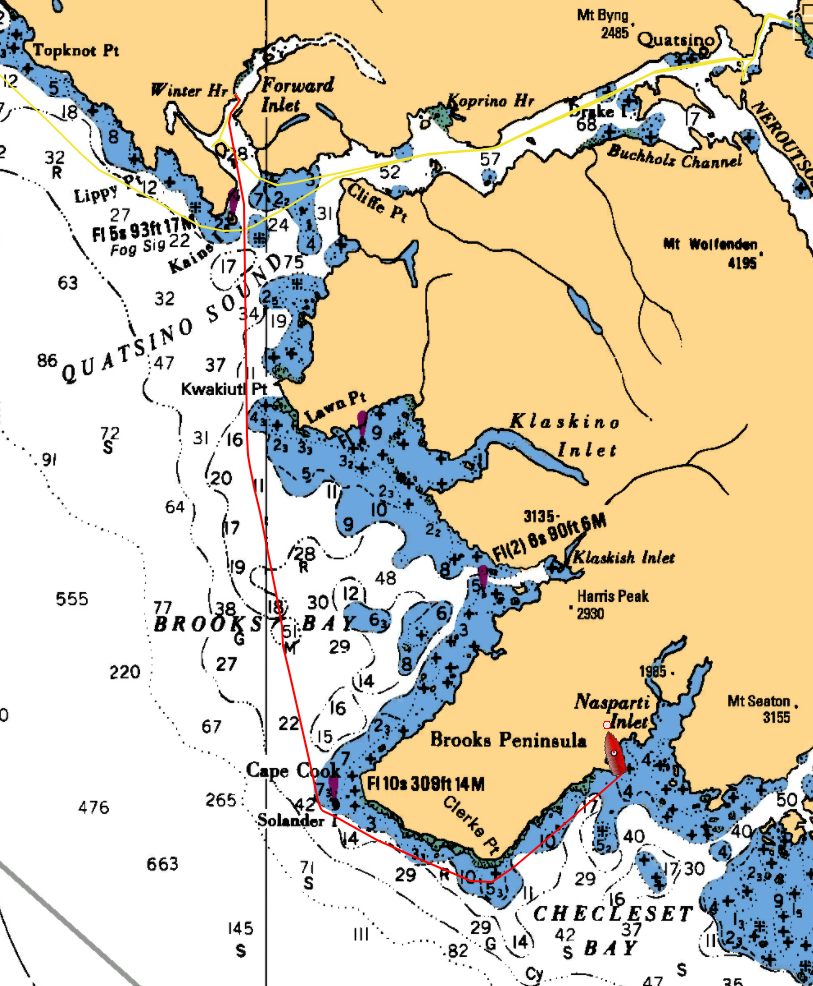