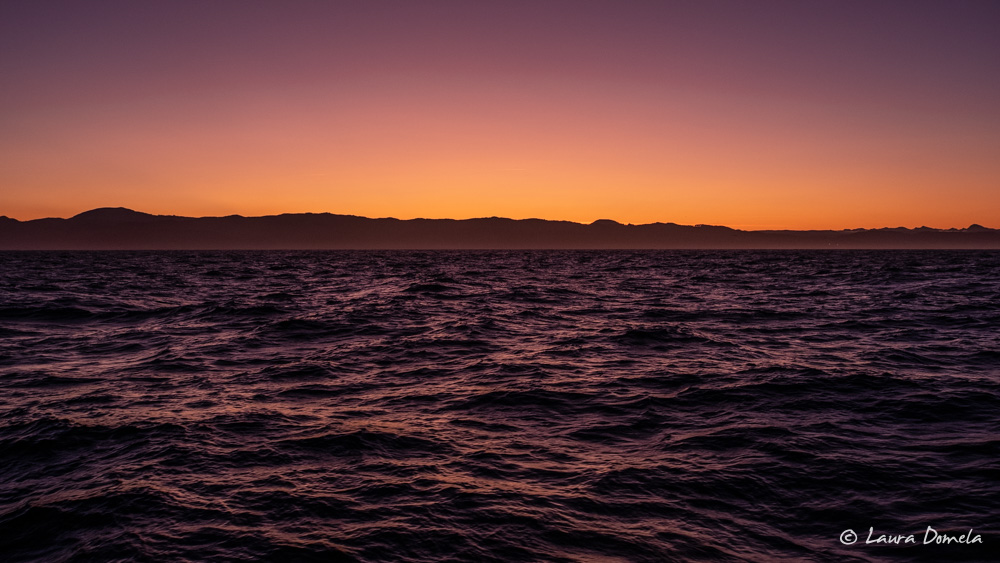 Thursday, 4:15 a.m. — Our original plan was to catch the early morning high slack at the Grays Harbor bar, which meant heading out before dark, again. However, in the morning we didn’t get an agreeable bar report (boooo!), so we opted to wait until the midday low slack and went back to bed (yaaaaay!).

Thursday, 11:15 a.m. — We left our slip at Westport Marina after a few more hours of sleep and headed for the bar (not that bar). 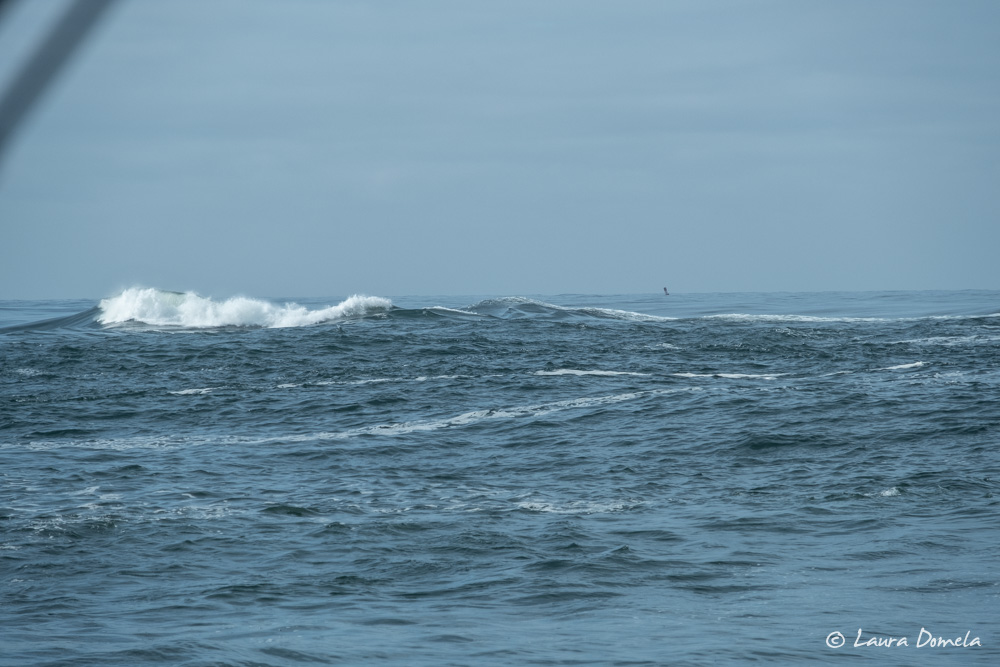 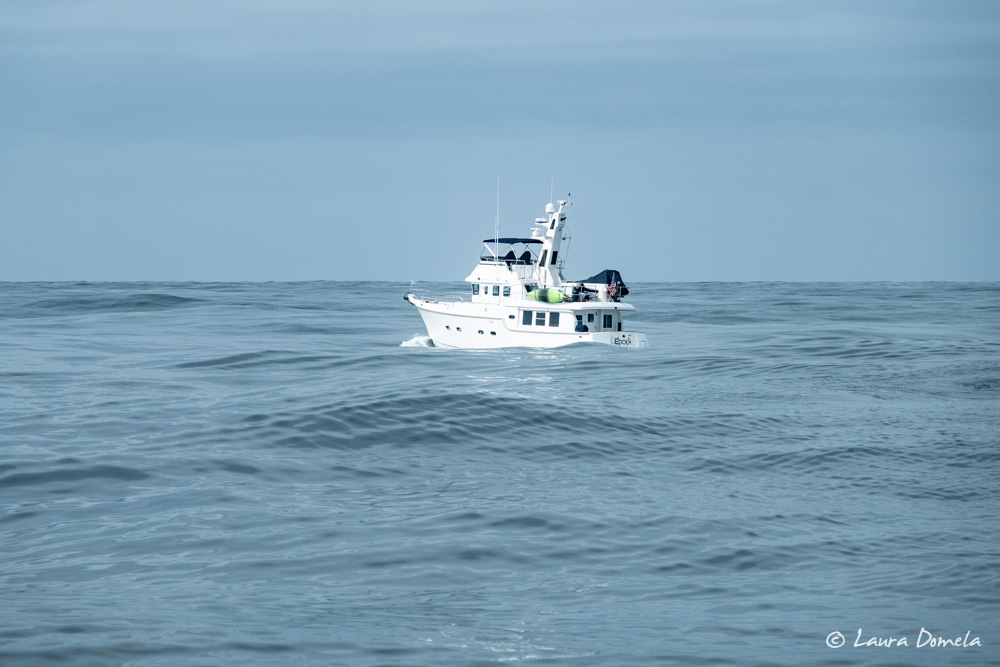 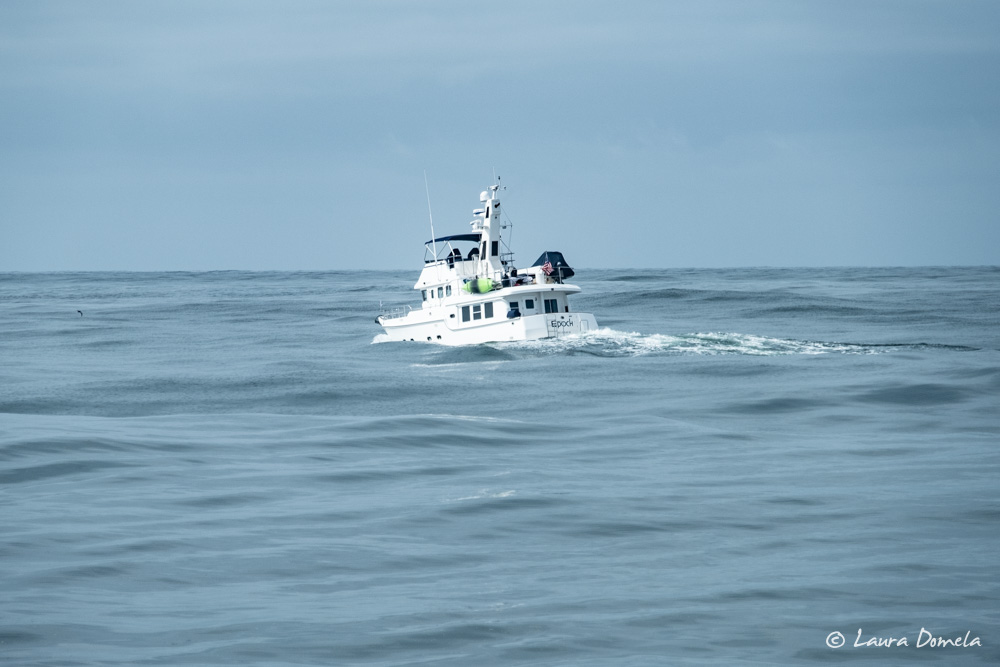 The bar crossing was much nicer in the daylight where we could see the swells (and the channel!) and once out in the open water, things smoothed out nicely. The skies were gray and we had a little rain, but otherwise a nice afternoon. 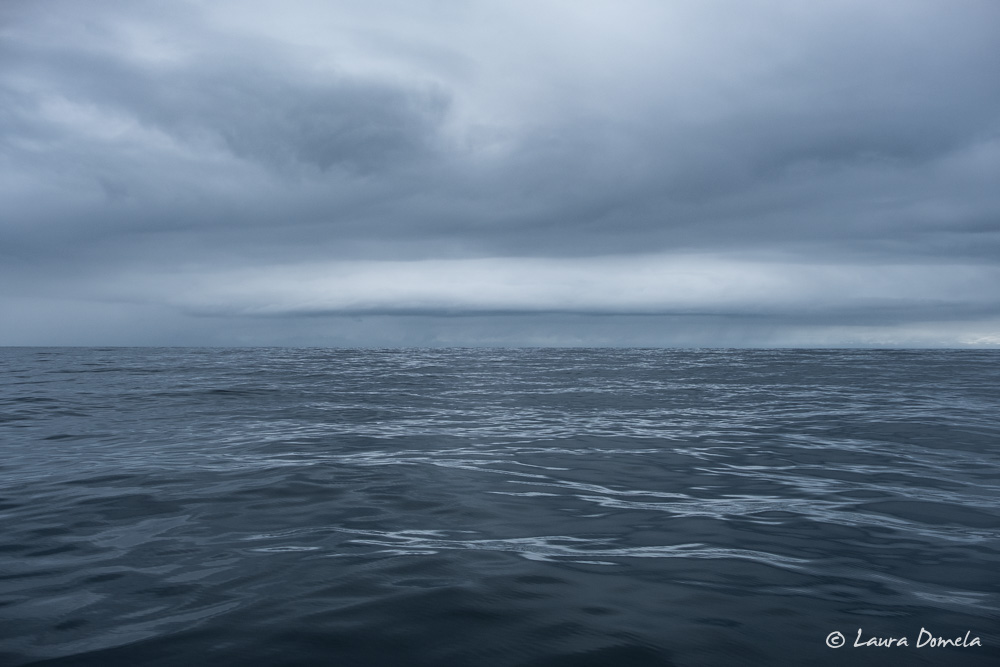 Thursday, 7:00 p.m. — Alison started a beef roast in the slow cooker earlier this morning and it was a nice hot dinner for all by dinnertime.

Friday, 7:00 a..m. — We were hoping for a nice sunrise this morning, but it was just a gradual lightening from dark gray to light gray.

Friday, 2:30 p.m. — For at least 28 hours, we’ve had this little guy hitching a ride on Red Rover. When the side windows are open, he flies into the pilothouse and we have to gently catch him and let him out. He’s very puffy and cute though. 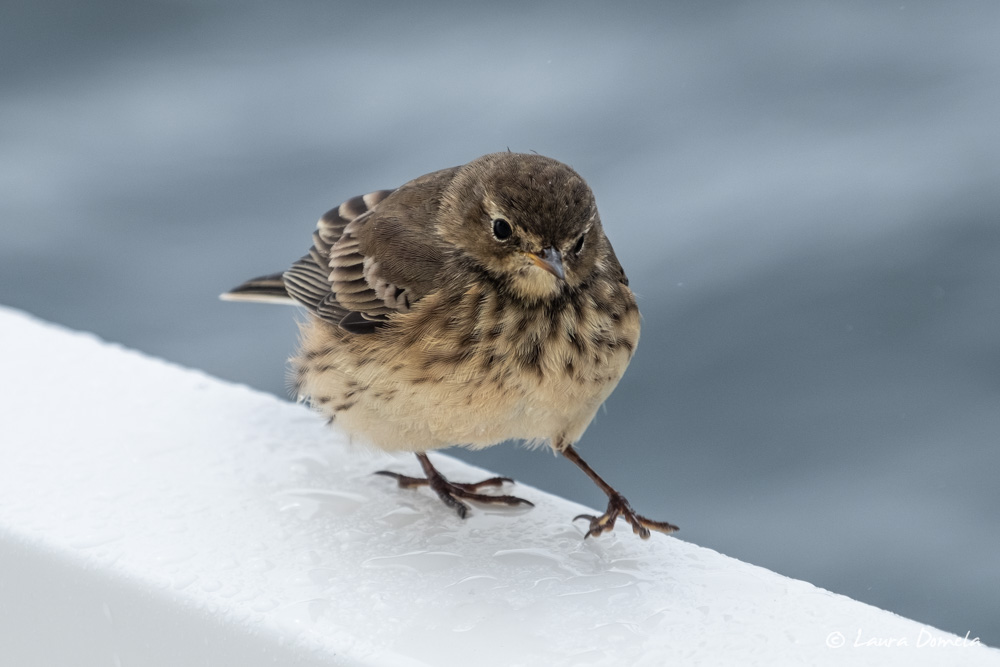 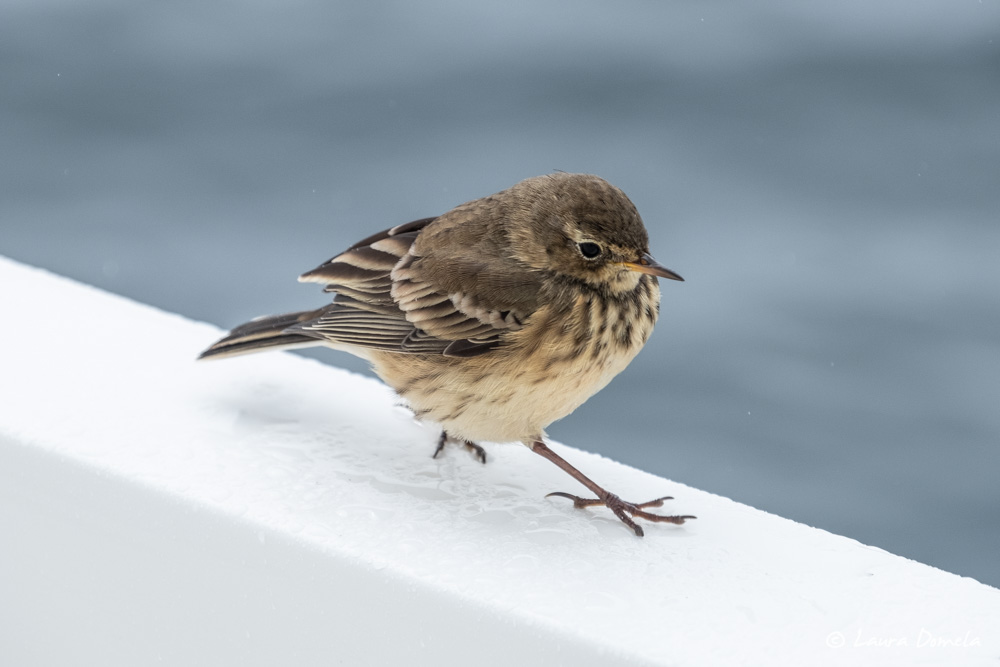 Friday, 4:35 p.m. — Kevin and I seriously lucked out on this watch. As we said, today has already been a good whale day, but none have been all that close (and I didn’t pack the long lens for this trip). Scott and Abby on Epoch said they saw orcas off their starboard side earlier in the day, but we never saw those. But this afternoon on our watch, these big guys surfaced just off our port side this afternoon (about 16nm offshore, abeam of Reedsport, OR), and they were definitely not humpbacks, but blue whales — the largest animal ever on earth!!! — so, pretty exciting to see at such a close range. They were enormous!! An adult blue whale can grow to about 100 feet long and weigh up to almost 400,000 pounds, and could fit a hundred people in its mouth! Its heart weighs as much as a small car! 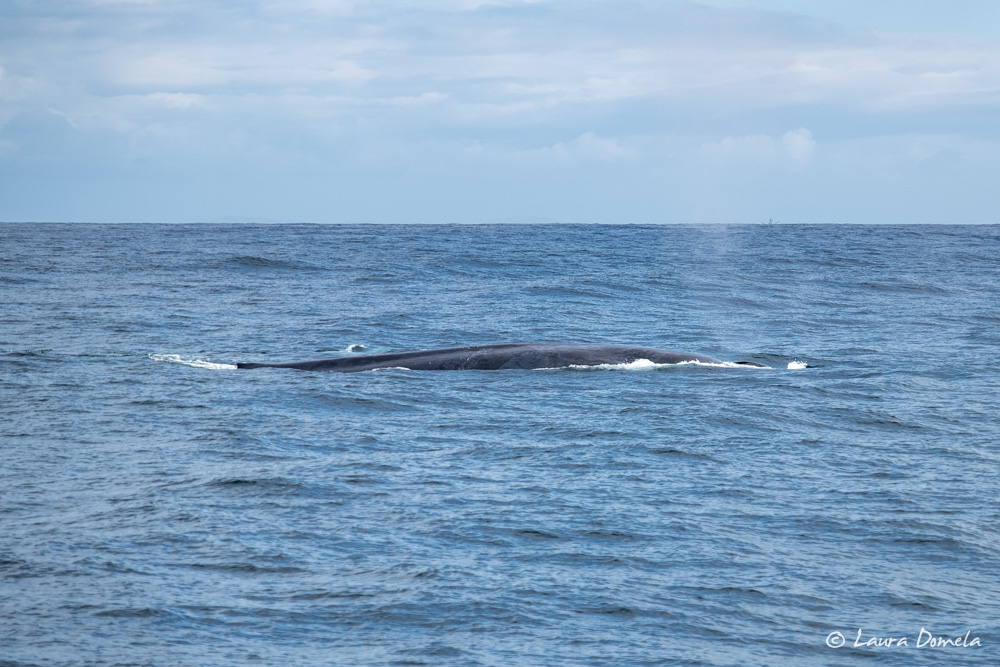 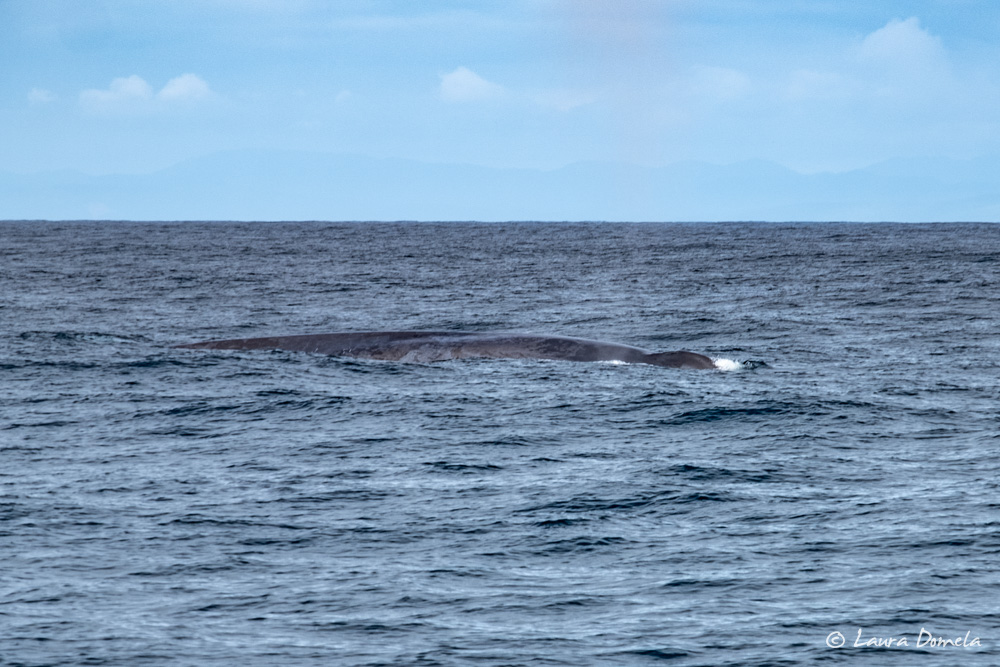 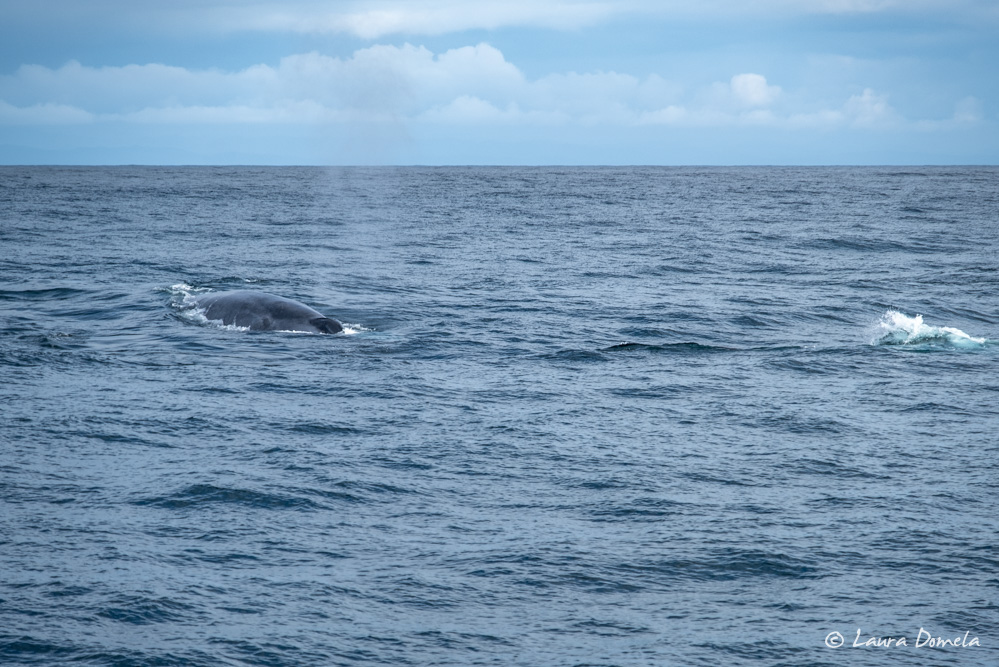 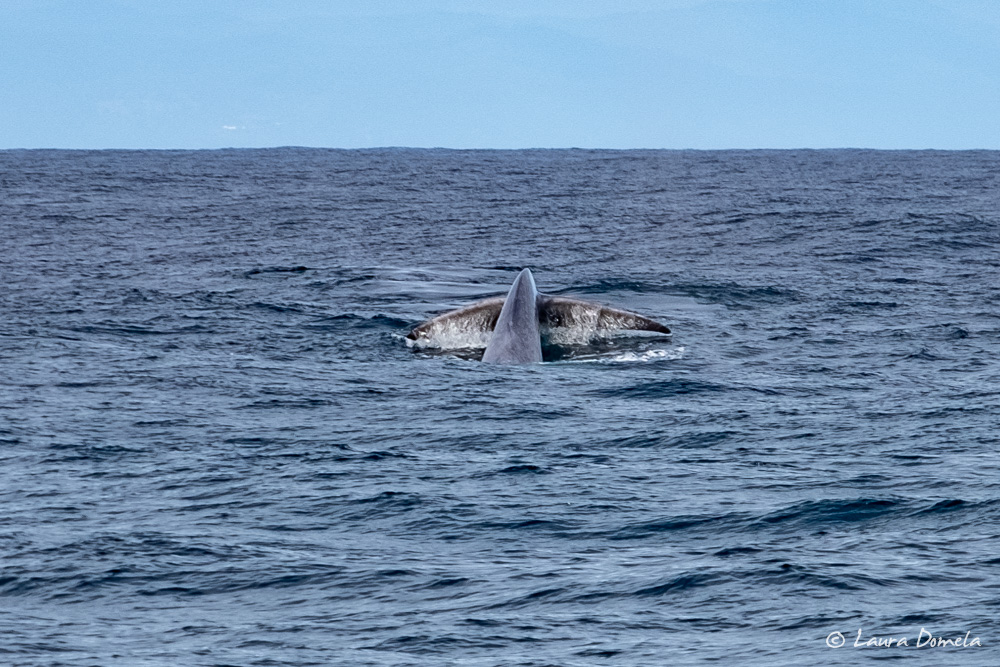 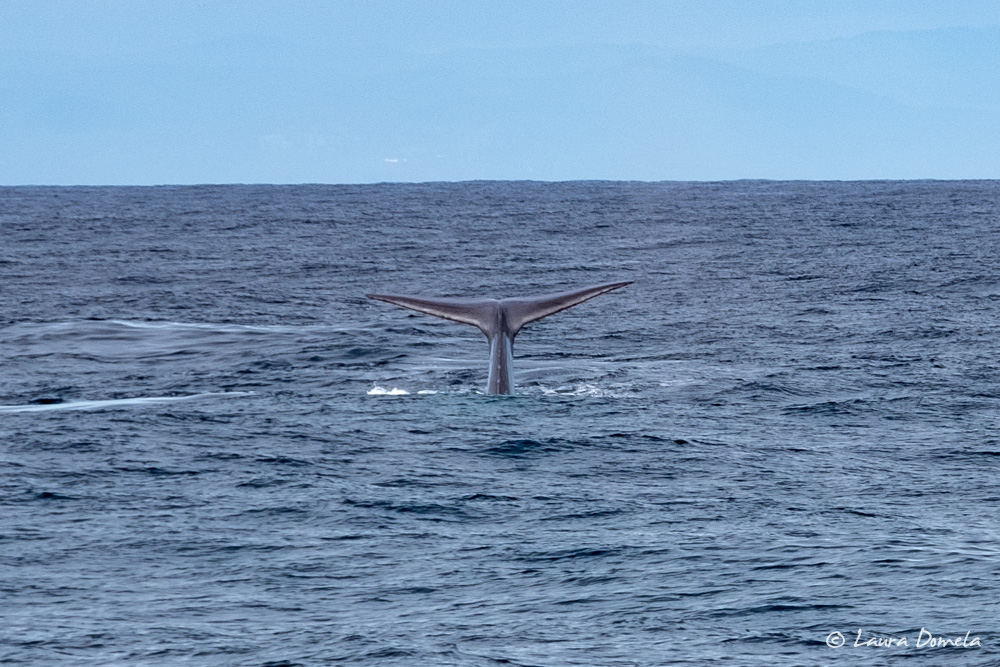 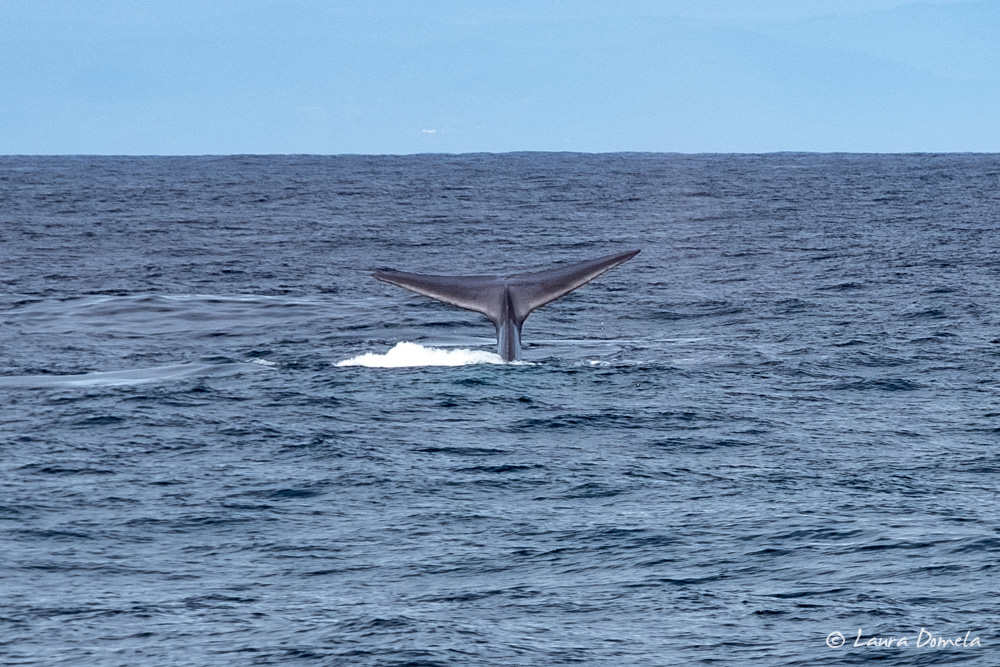 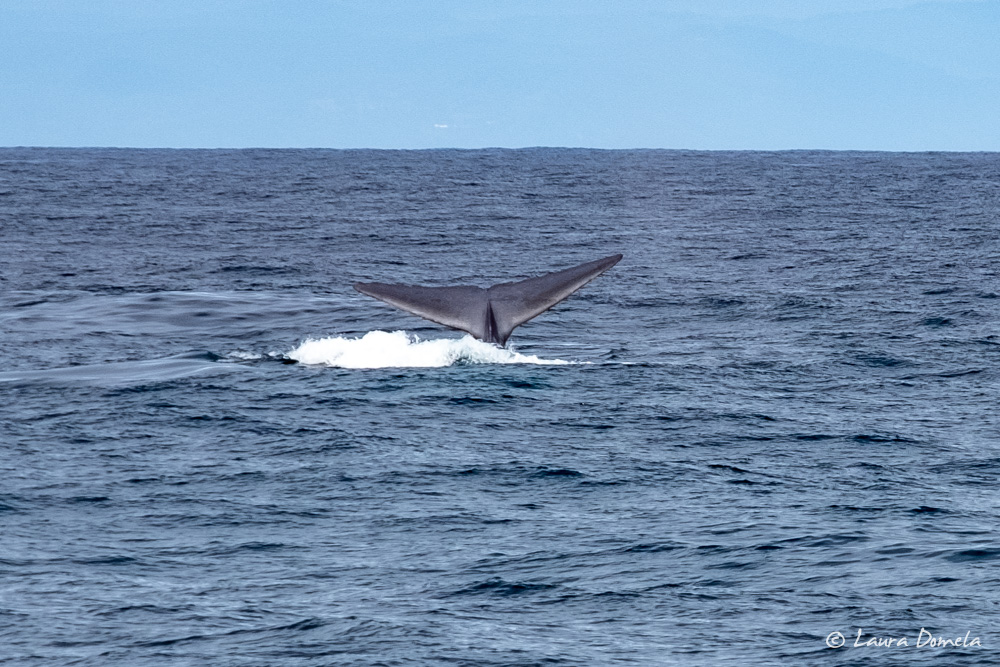 I remembered seeing this article a few days ago about a “rare blue whale sighting off the Washington coast” so we called and reported the sighting and sent some photos to the Cascadia Research Collective, with the help of Howard Garrett from the Orca Network. Hopefully with these photos (and a few others we sent along) they can identify the whales. It’s rare overall to see blue whales, but especially this far north. John Calambokidis from the Cascadia Research Collective said that last month they worked a little bit south of where we spotted these guys and found about a dozen blue whales, so it has apparently been a year with blue whales sighted further north than typical. So glad we got to see these giants! The blue whale is the largest known animal to have ever lived, way bigger than any of the dinosaurs.

Friday, 6:41 p.m. — All four of us were up in the pilothouse getting ready for the shift change and caught another humpback in the distance, breaching, and tail- and fin-slapping. 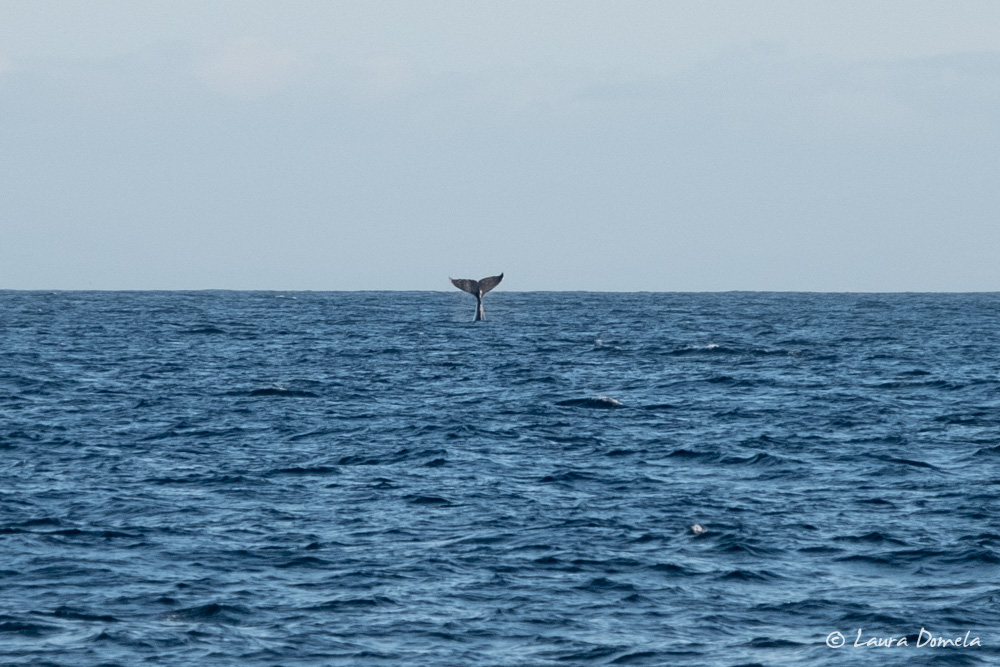 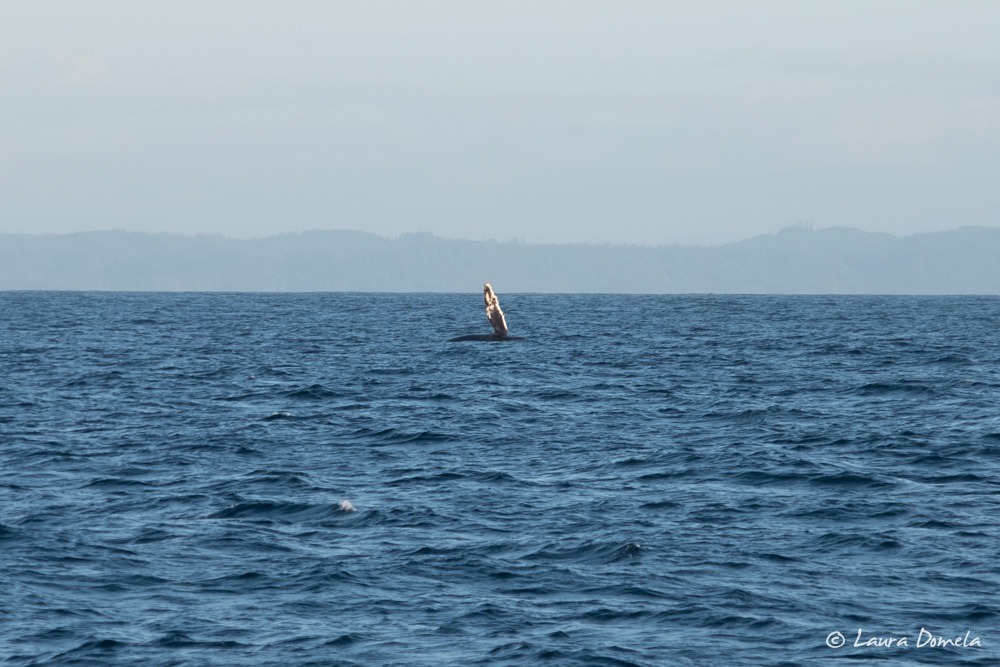 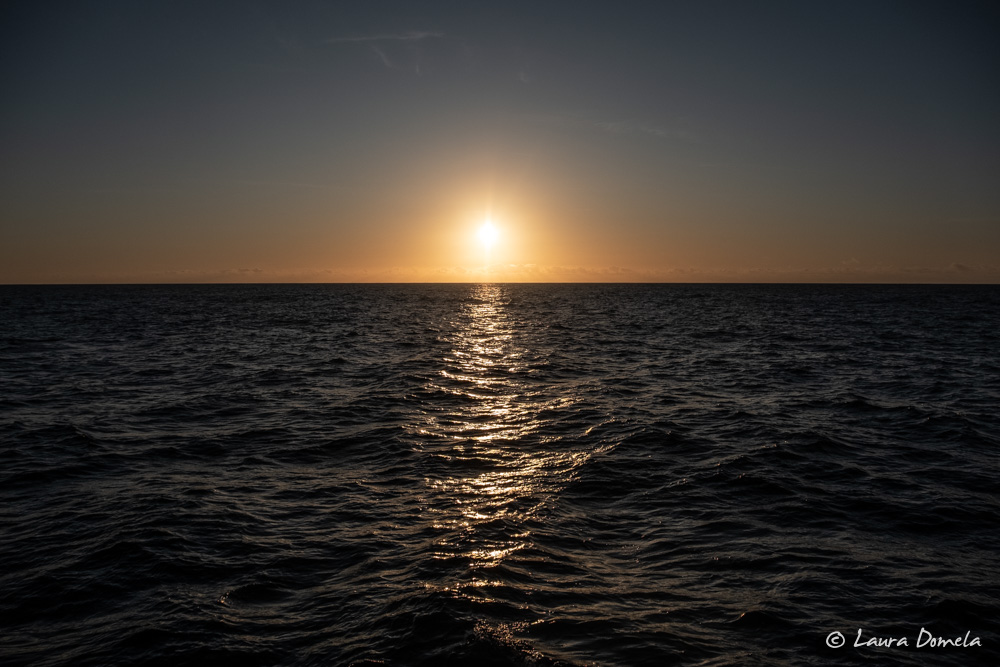 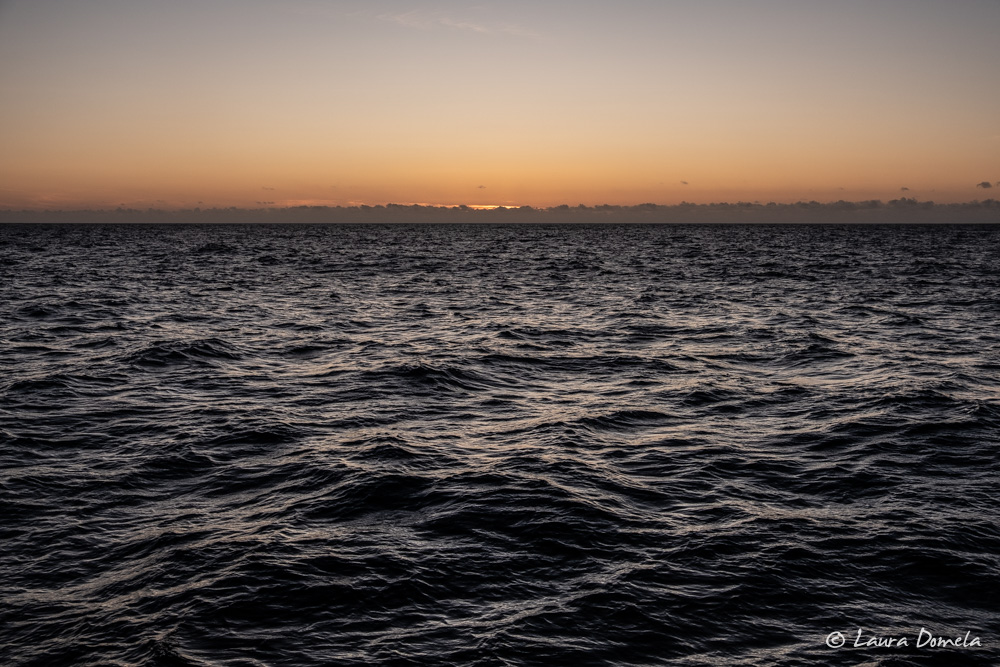 Saturday, 1:00 a.m. — Kevin and I are back at the helm. The sky is mostly clear, the moonlight shimmers brightly on the water, we’ve got gentle following seas and 15-20kts of wind from the north, and Orion’s belt is hanging low in the sky off the port side. And the birds are back.

Saturday, 6:52 a.m. — About to change watch shifts again. We’ll get a few more hours of sleep before we make the approach into Crescent City later this morning. 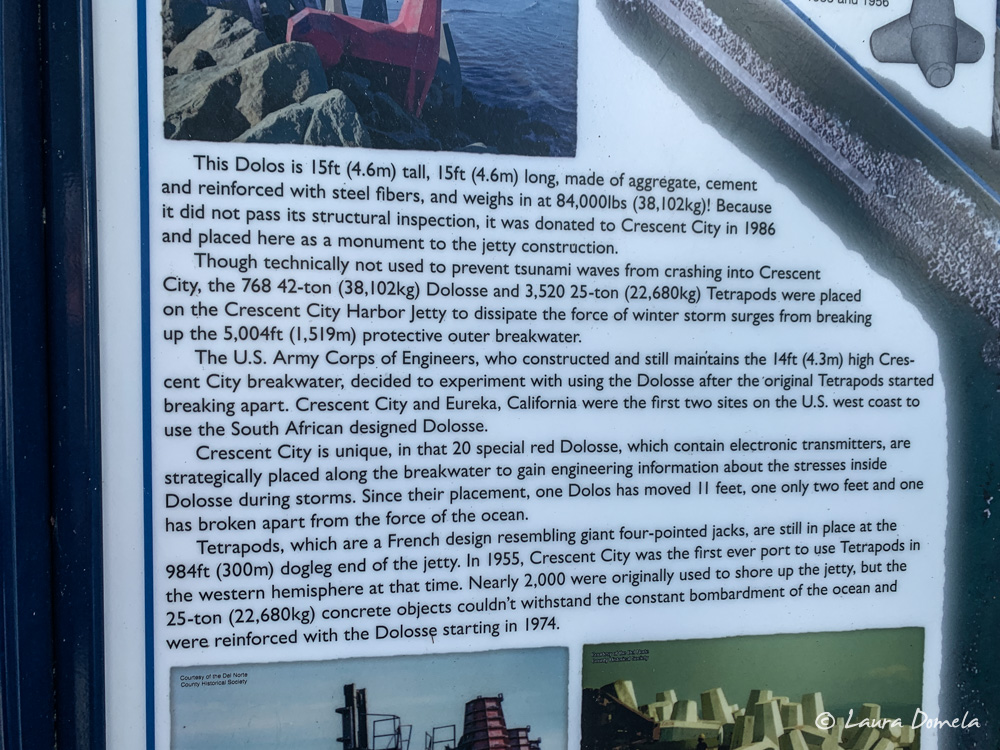 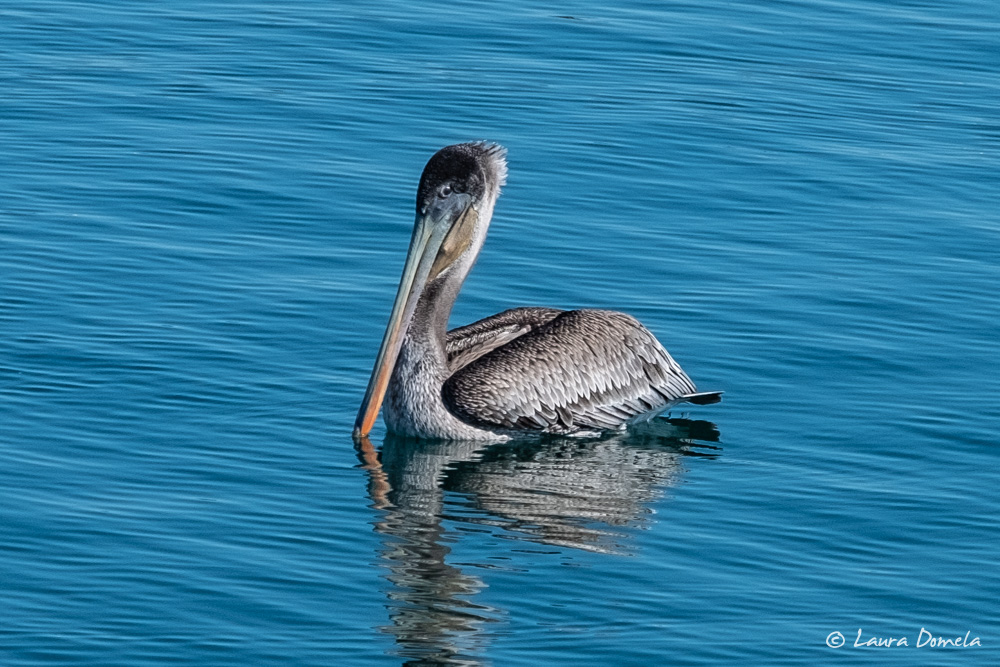 We pulled into the Crescent City Harbor marina with Epoch close behind, and got a couple slips next to each other on B dock. After we managed to capture and free the two little waterbirds that landed on the bow and rode with us from Coos Bay or so (they apparently can’t take back off from the boat, and couldn’t get to the water themselves, and yes, I know, pictures would have been good), and hosing off the boat (and the waterbird poop in the cockpit, where they eventually huddled/settled), we all walked into town to get some lunch.

Across the street from the brewery we found this epic collection of topiary. There were, oh, maybe twenty or so of these big green gum drop trees. Cool, but also a little creepy. 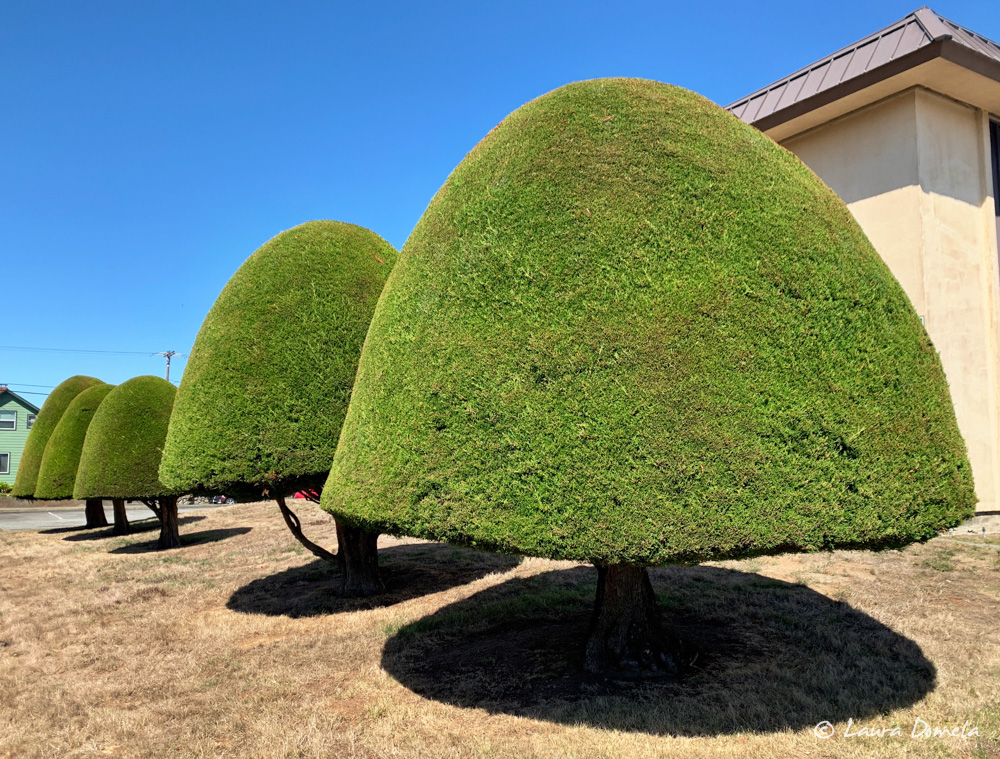 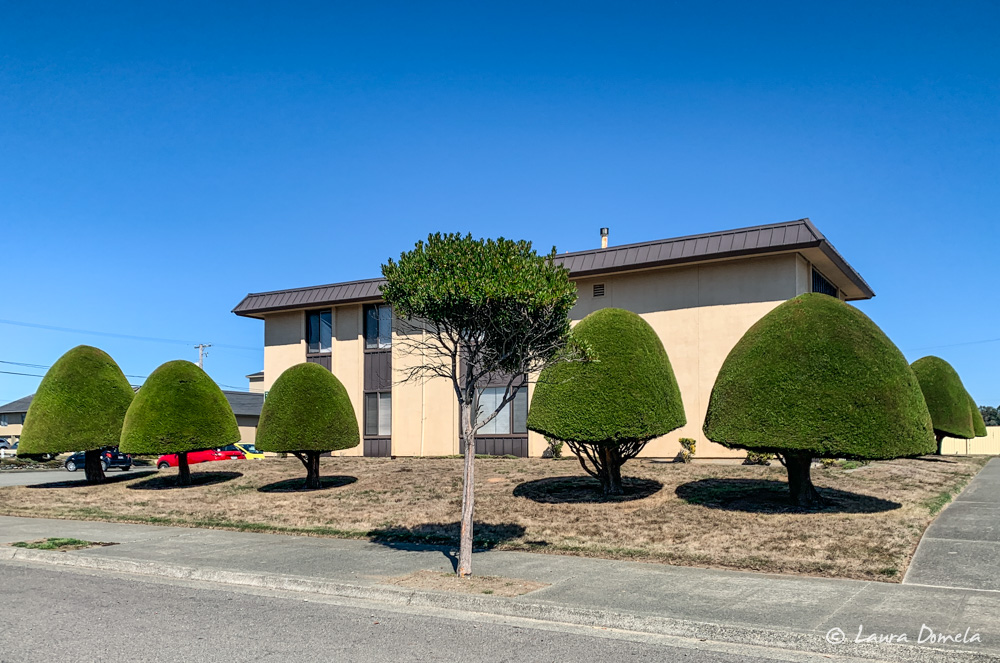 We are back on board now, happy and fed and walked, and I think naps are in order. We will likely be here at least one day, so we’ll explore town, walk to the lighthouse, and maybe even rent a car to go see some redwoods. Leg 2 = success!