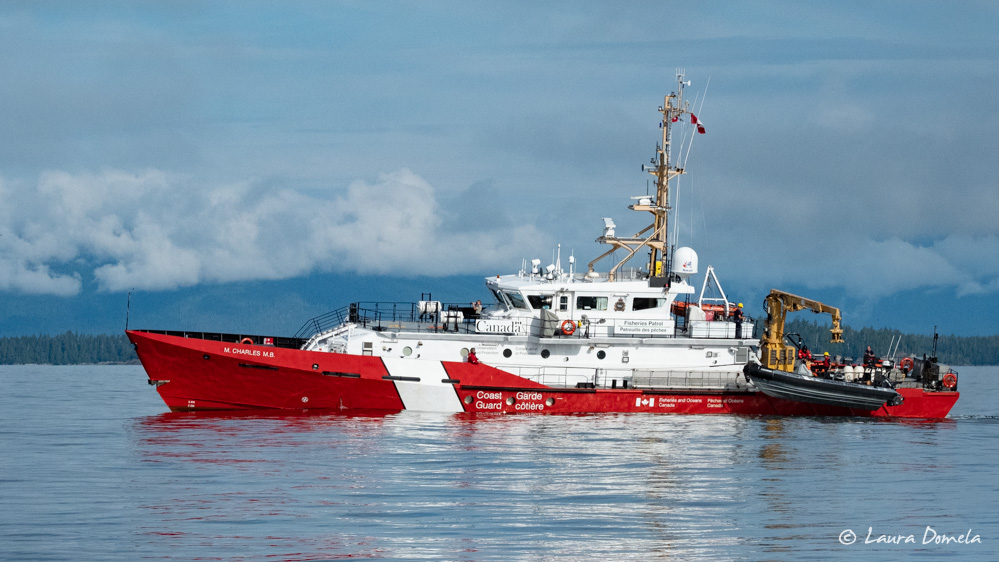 This morning, en route from Bamfield to Effingham Bay, Airship and Dog Star had just entered Imperial Channel near Diana Island, when Dog Star radioed to tell us (on Airship) there were whales off their port side. We kept an eye out, and eventually spotted at a couple of humpbacks a half mile or so west of our course. One of the whales looked like it was just floating on the surface, which seemed odd, and after a few minutes it hadn’t moved much at all. We noticed an orange buoy (from a prawn or crab trap) very close to the whale. Fearing the whale might caught in the trap, we decided to head that way to get a closer look.

We looked with binoculars and confirmed (unfortunately) that the orange buoy was moving along with the smaller of the two whales, a humpback calf. The larger whale (presumably the calf’s mother) was circling close by. 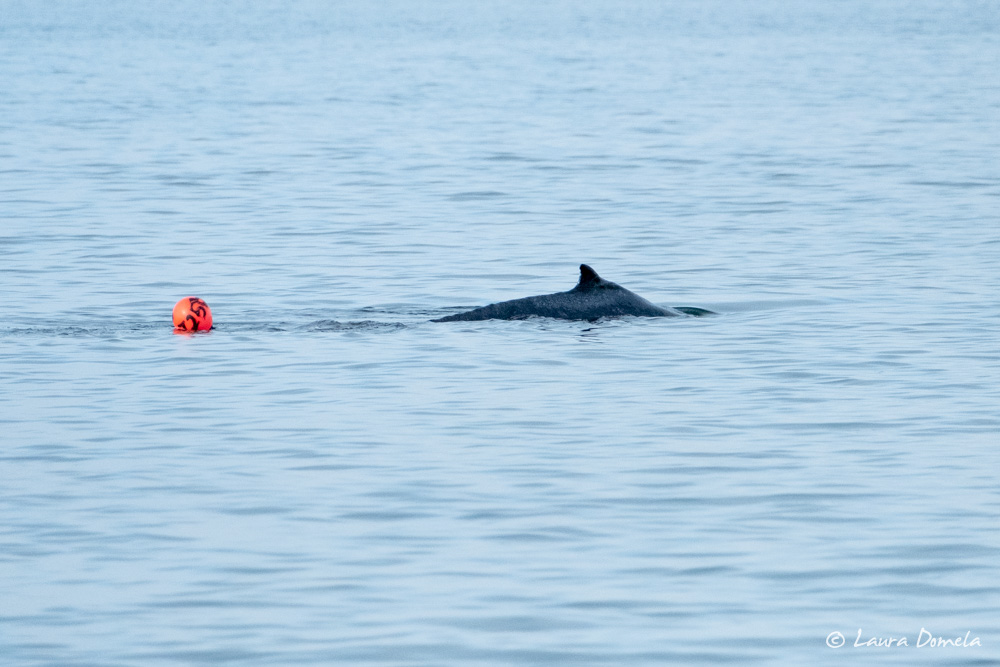 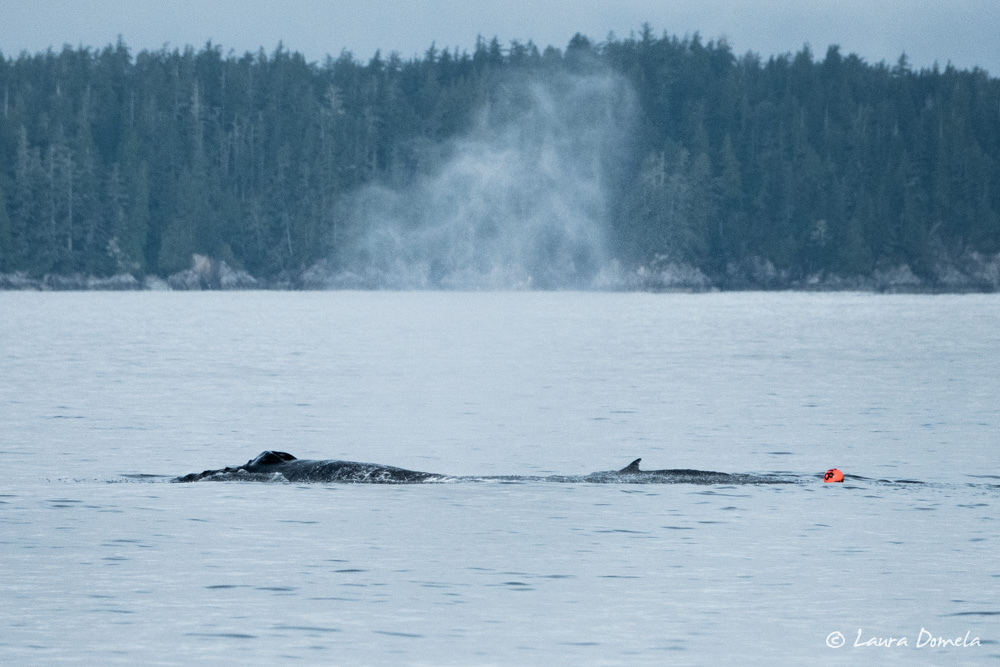 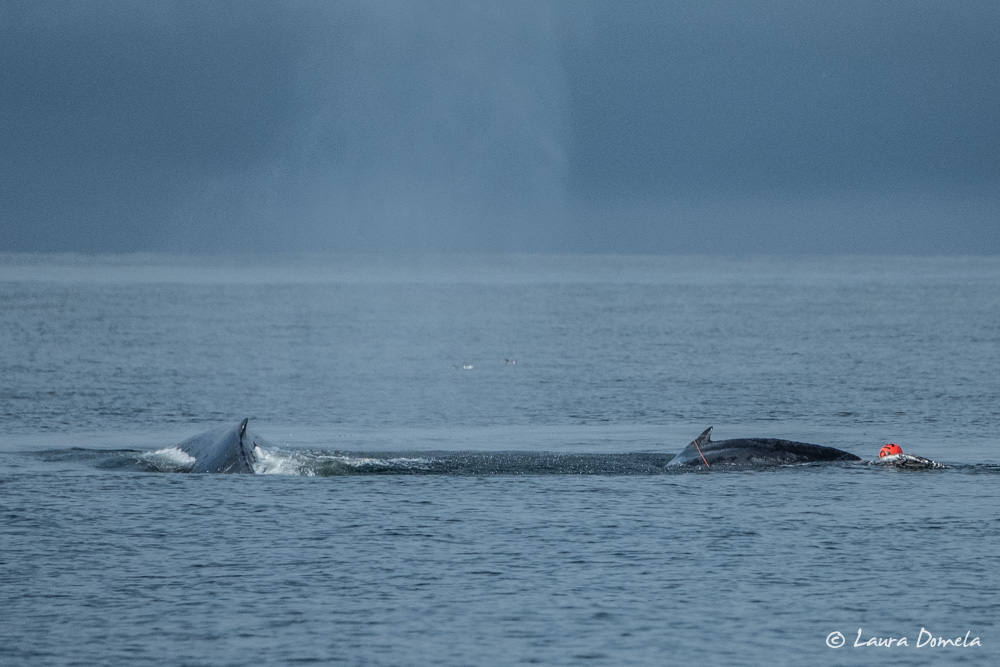 Clearly, the calf was entangled in the trap line, and was in distress. 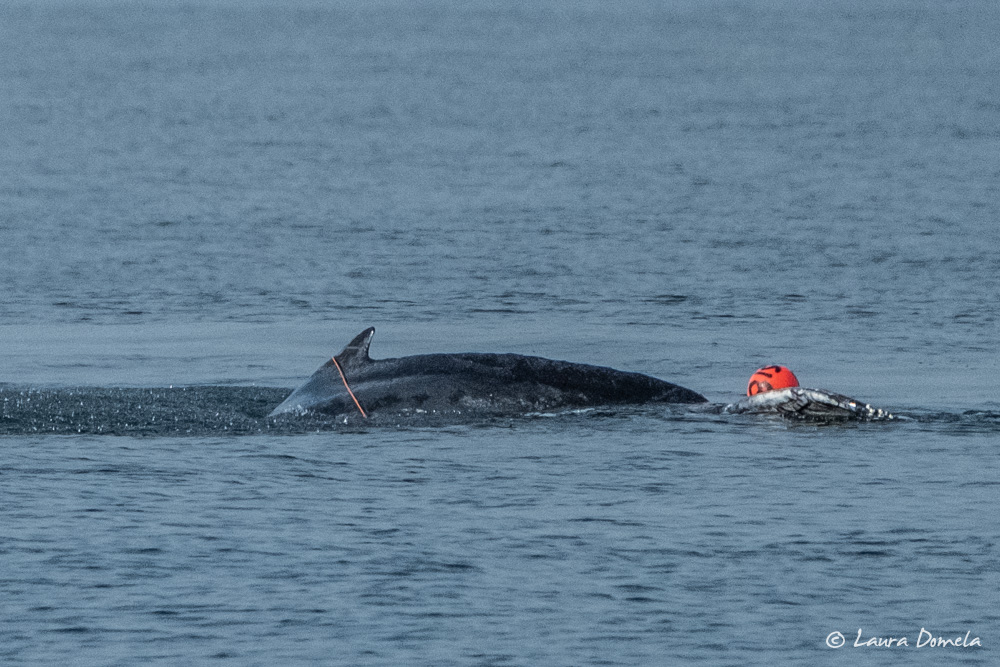 We called Prince Rupert Coast Guard on the non-emergency VHF channel (83) to report the animal in distress. They collected our information – GPS coordinates, wind, sea state, etc, and asked us to stand by on channels 83 and 16 while they contacted marine mammal rescue. We told them we were transmitting AIS and would hold station a half-mile or so from the mammals, keeping them in sight, to assist rescuers in finding them.

Within a few minutes, we heard the call from a Coast Guard Fisheries vessel “M. Charles” that they were about five miles out, had a “whale kit” on board, had Airship’s AIS location, and would respond. Soon, we picked up the vessel on radar coming our way at 16 knots. As they neared,  they radioed and asked the position of the whales. We let them know that the whales were approximately 500 meters off our bow, and warned them that the mother was circling the distressed calf.

The M. Charles launched their RIB, and we watched as it headed out slowly toward the entangled calf. 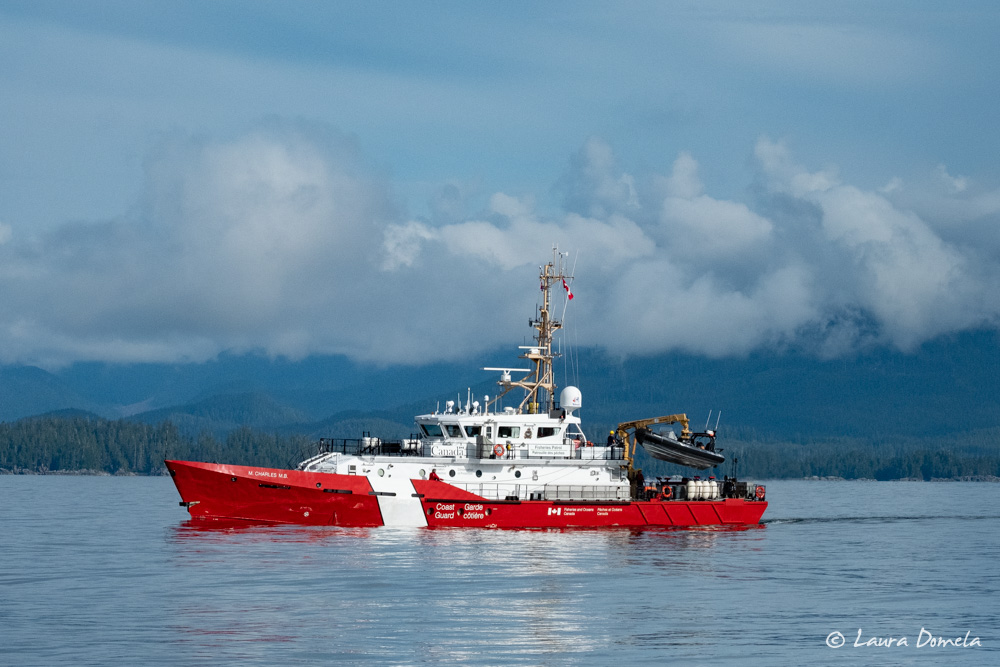 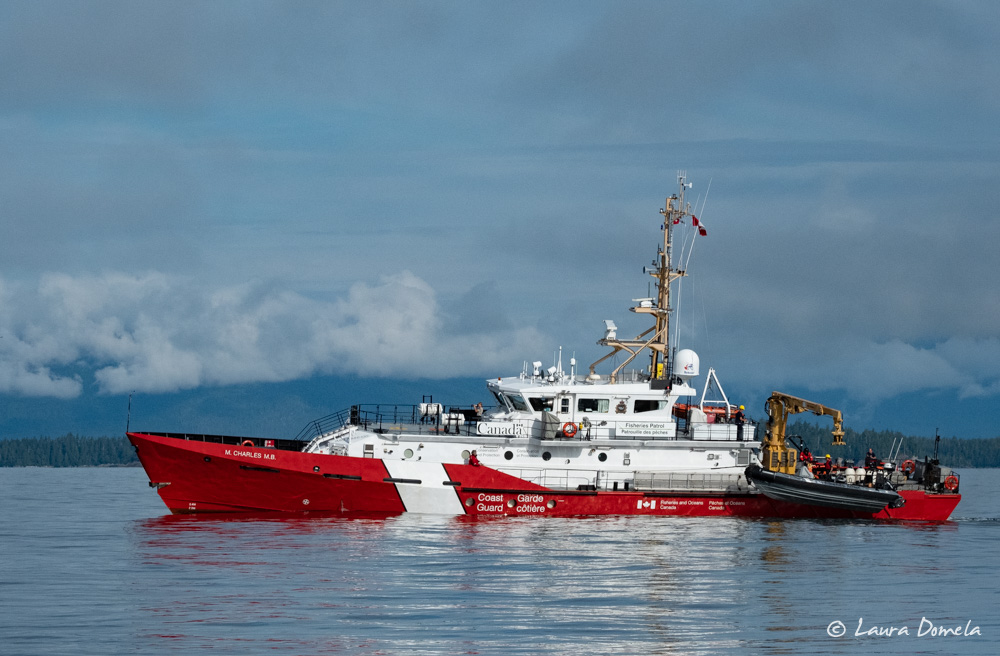 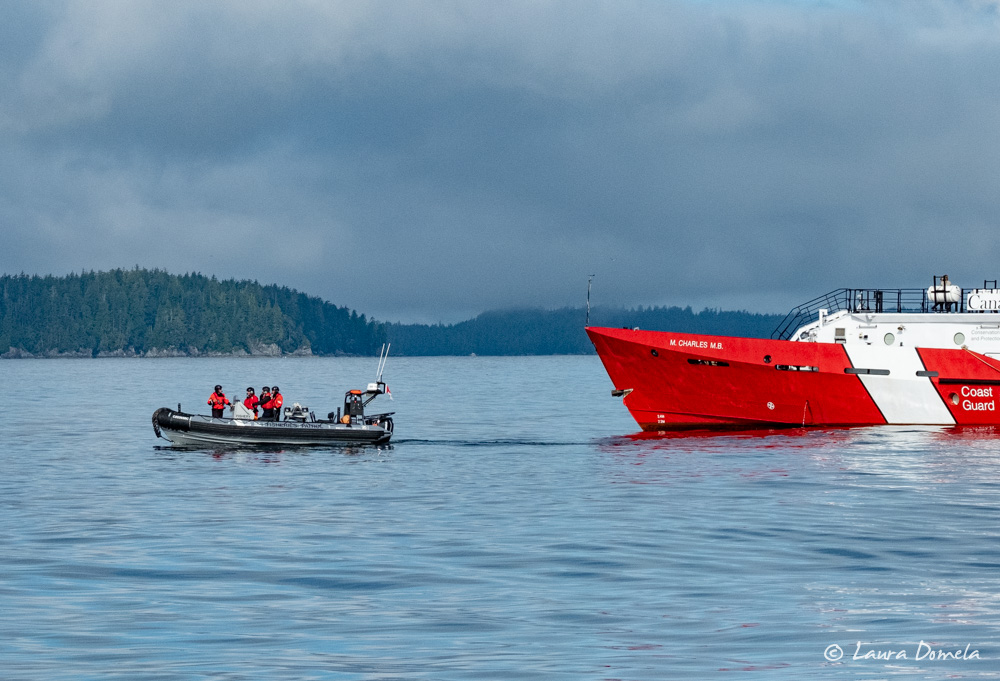 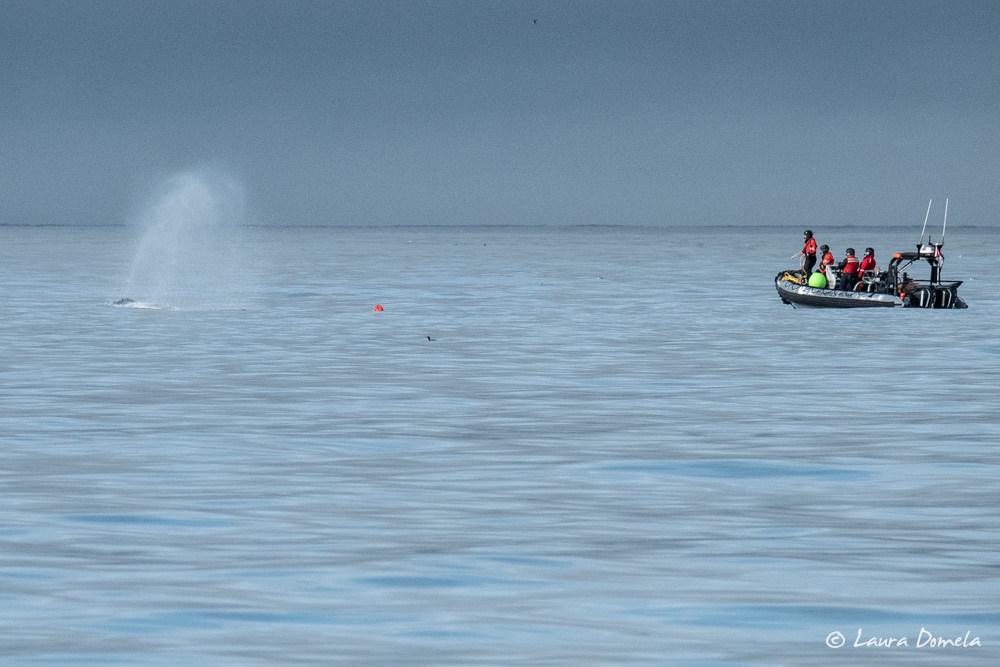 They were able to pretty swiftly get another line attached to the orange buoy line, and that held a lime green buoy with what appeared to be some type of radio transmitter, presumably something with GPS to aid in tracking the animal while awaiting additional assistance. 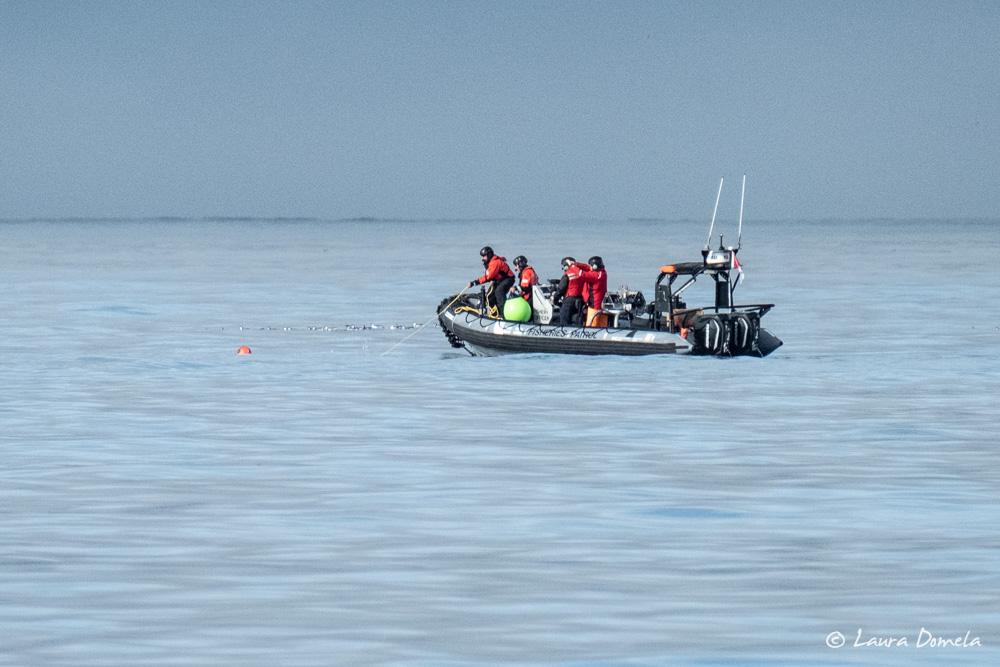 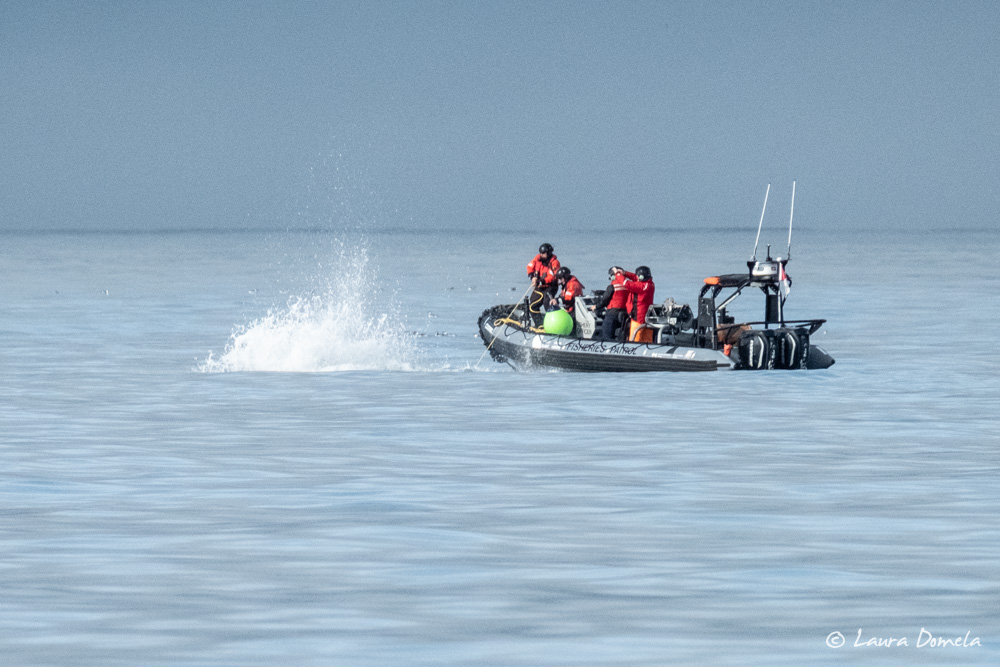 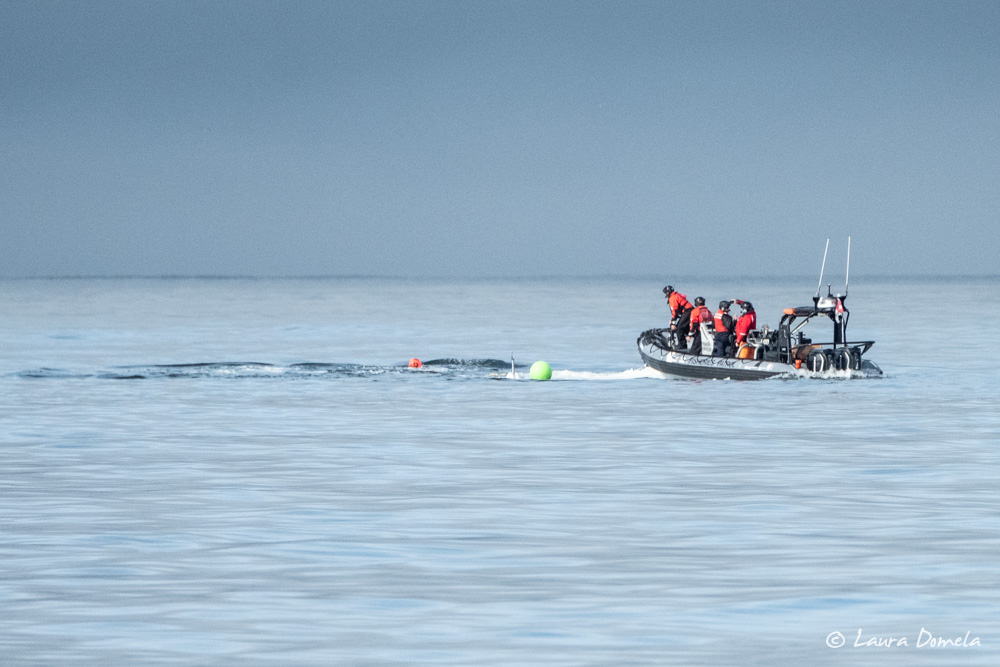 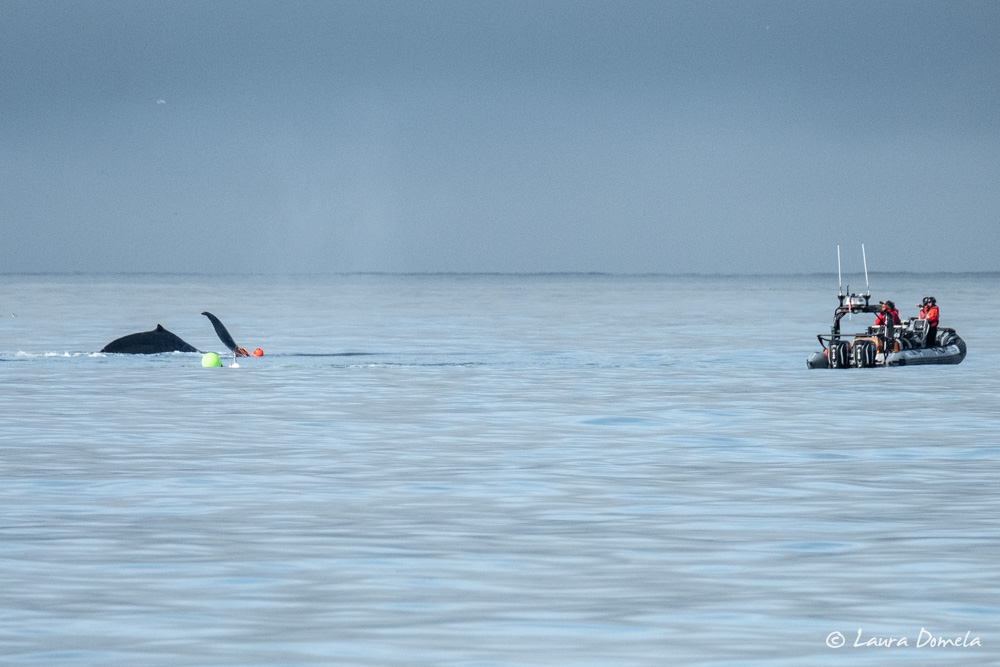 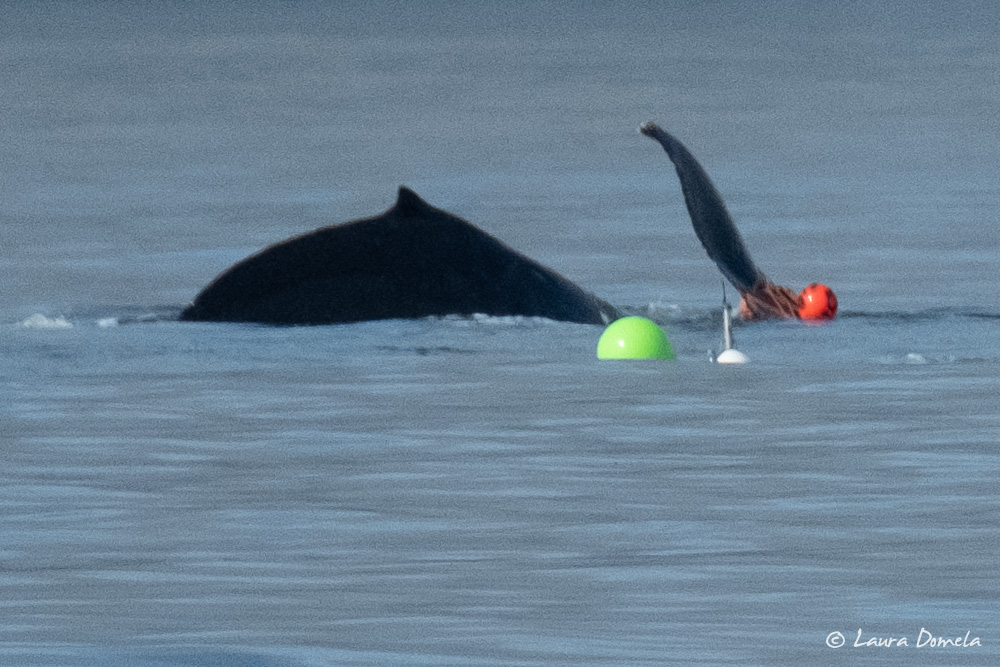 Another whale breached several times in the distance. 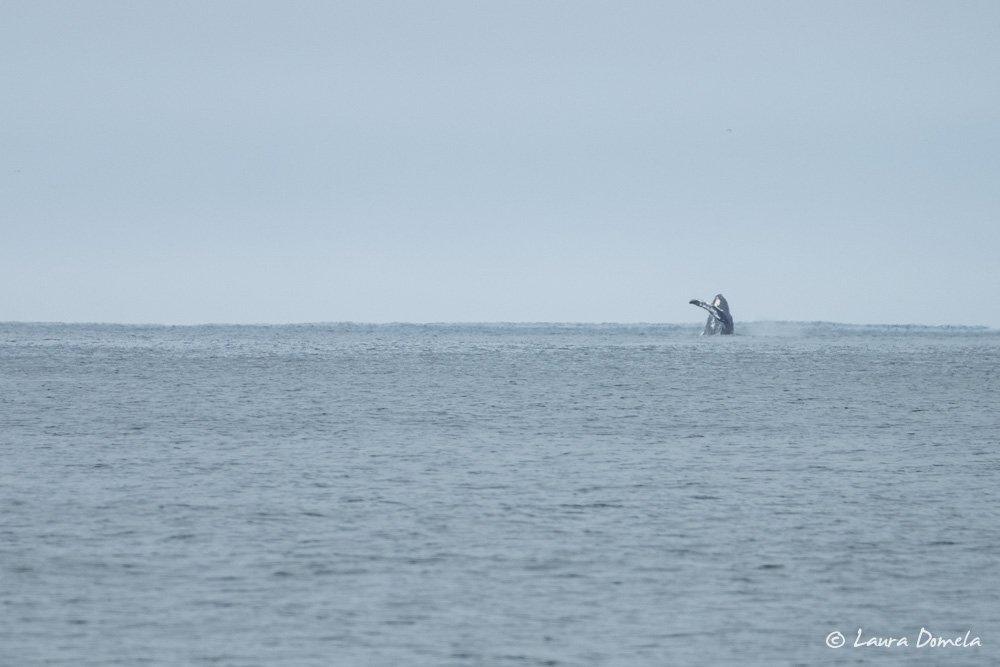 It appeared to us this would be a tricky rescue. The calf was heavily entangled in the line from the trap, and the mother hovering in close proximity posed forty or so tons of danger to rescuers trying to get close to free the calf. We remained on station until about noon, watching from 3/4 mile away. Another RIB came zooming in toward the Coast Guard RIB and we thought it might be the mammal rescue team, but it was just Border Patrol. They sat out with the Coast Guard RIB for five minutes or so, and then left. 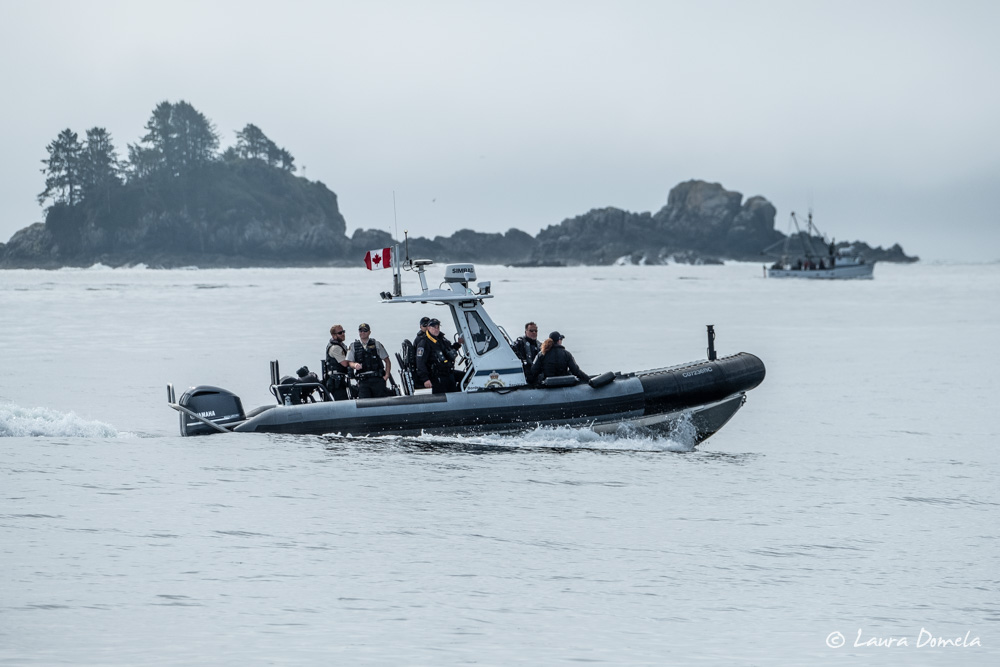 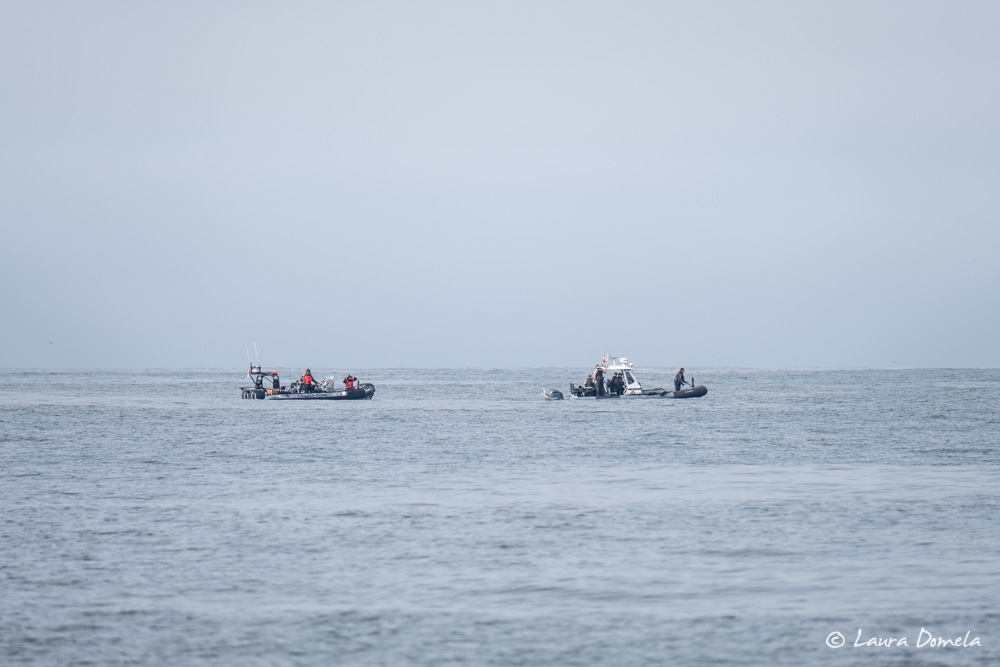 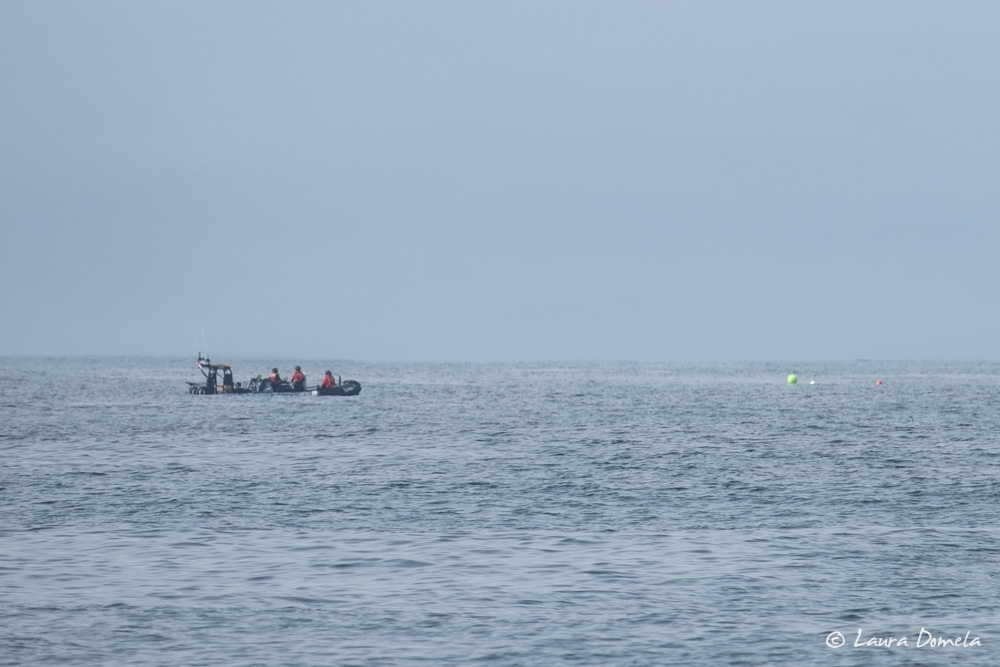 The wait for the mammal rescue team was long, and unsure of their ETA we decided to head into Effingham Bay and listen for any further progress on VHF. There was nothing more we could do, and the whales were moving further out toward Miller Reef, and into a fog bank just off shore. 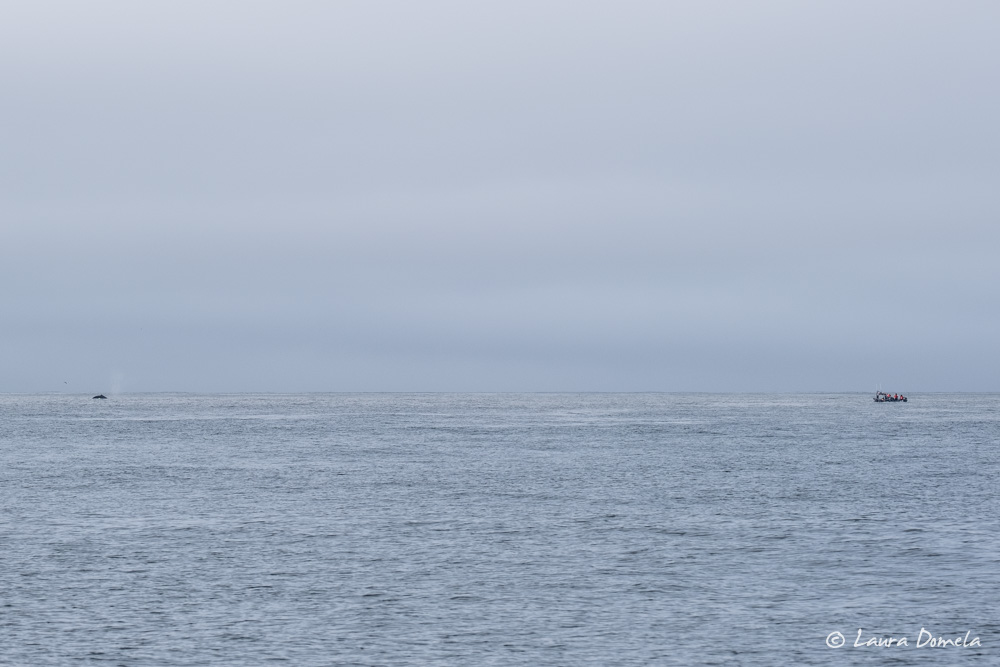 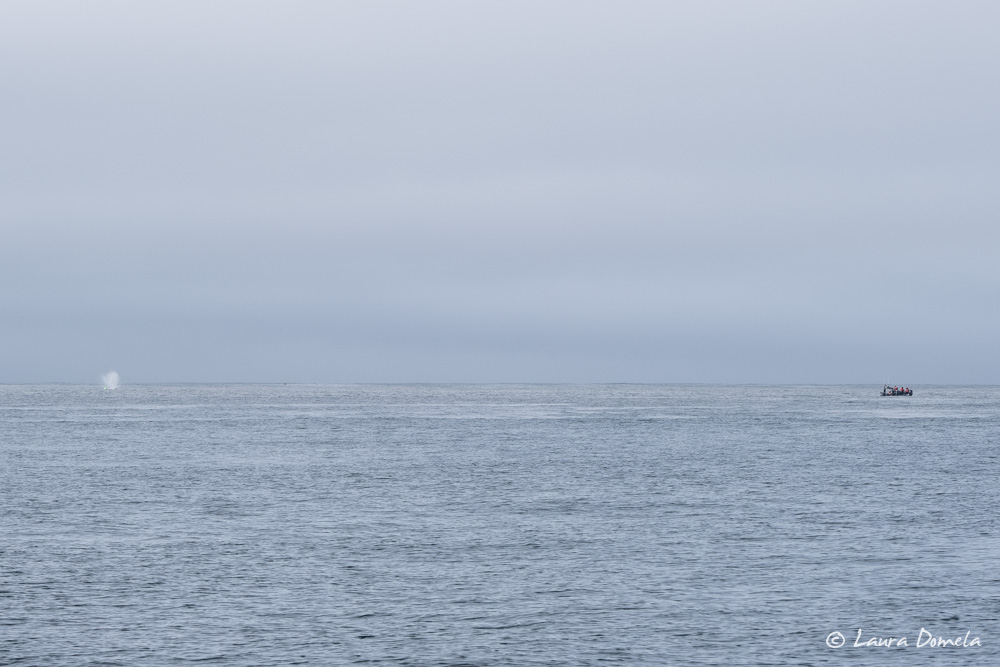 Airship anchored with the rest of the group and kept tabs on the rescue operation. Communication between the M. Charles and their RIB had moved to VHF 82, and included things like the RIB returning to the M. Charles for some additional supplies, contact with another nearby Coast Guard vessel asking them if they would stand by as backup and keep an eye on the mother as they approached the entangled calf…things like that. It was pretty exciting, and we really wished we could see the operation in person.

Somewhat reluctantly, we got out in the dinghies to go explore a little, taking the VHF with us. The rescue operation by then had moved further, and was about three miles south of Effingham Island, out at Miller Reef. 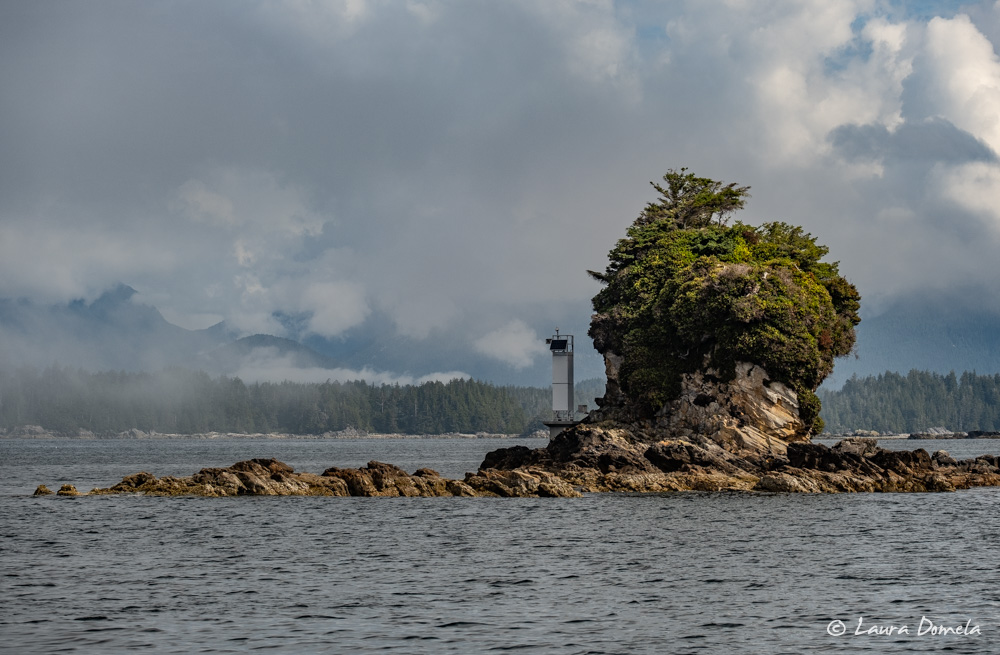 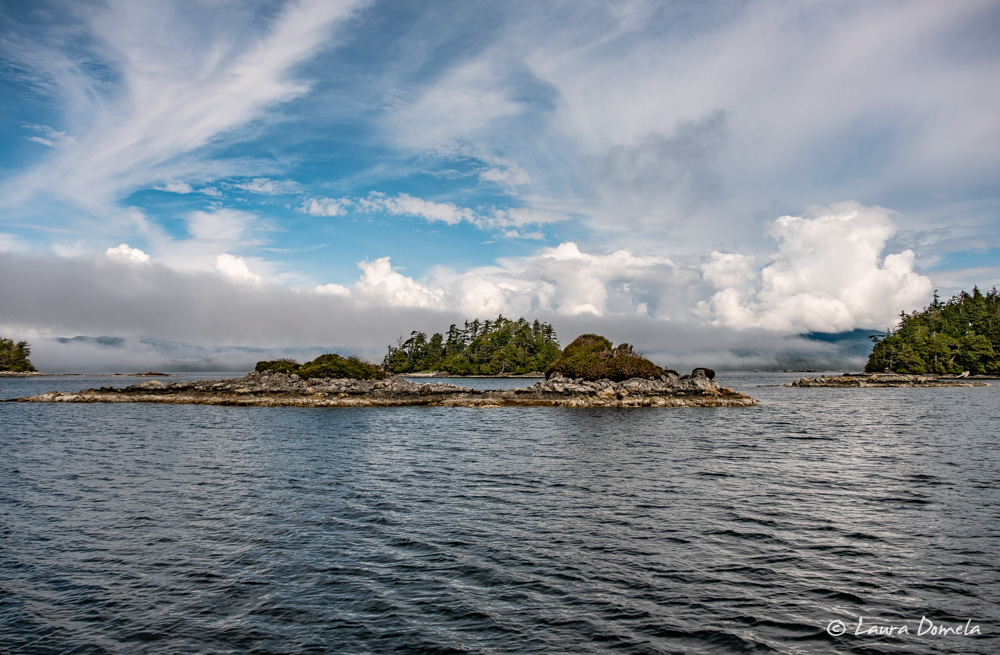 The fog was heavy on the other side of Effingham Island. 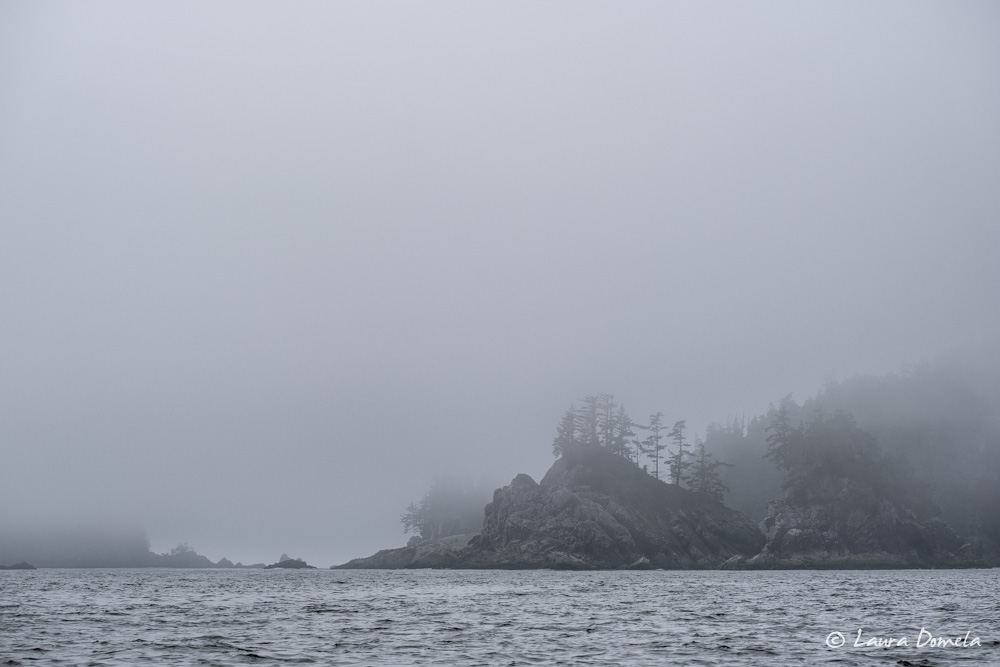 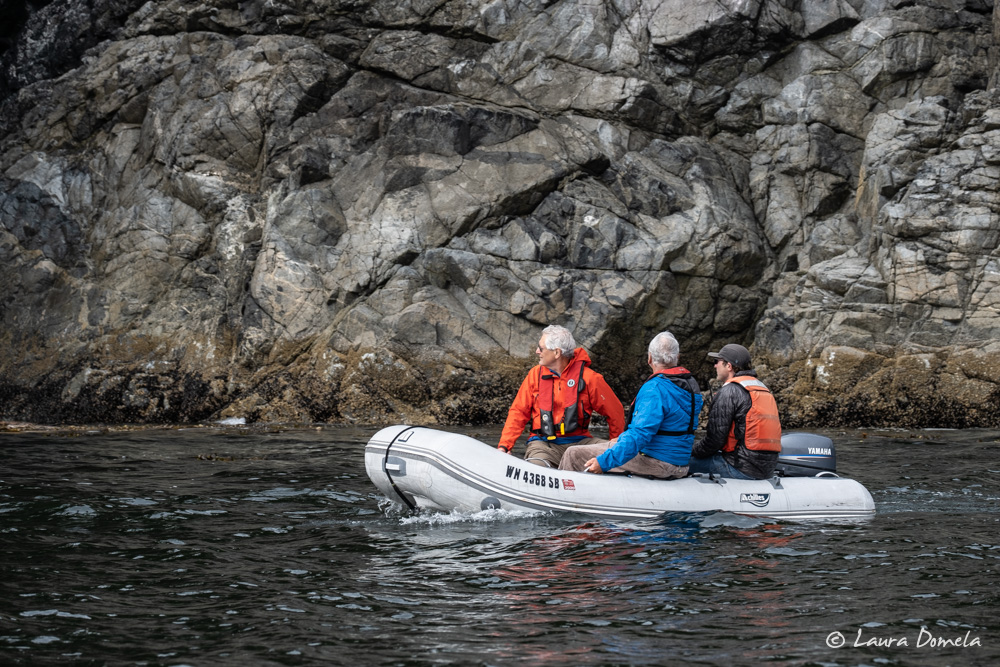 Back onboard after our dinghy excursion, we continued monitoring the operation, and eventually (and happily) heard the words “the mammal has been freed” — great news to hear after seven hours or so!

We had an Italian theme for dinner tonight on the raft. Roberta made spaghetti with capers and lemon and scallops, Scott did tortellini with red sauce, and Laura made a big green salad (using all fresh lettuce from the boat garden!) with preserved lemon vinaigrette, and zucchini lasagna rolls (recipe below). Julie used some of the recently caught salmon for salmon cakes as an appetizer. All was delicious! 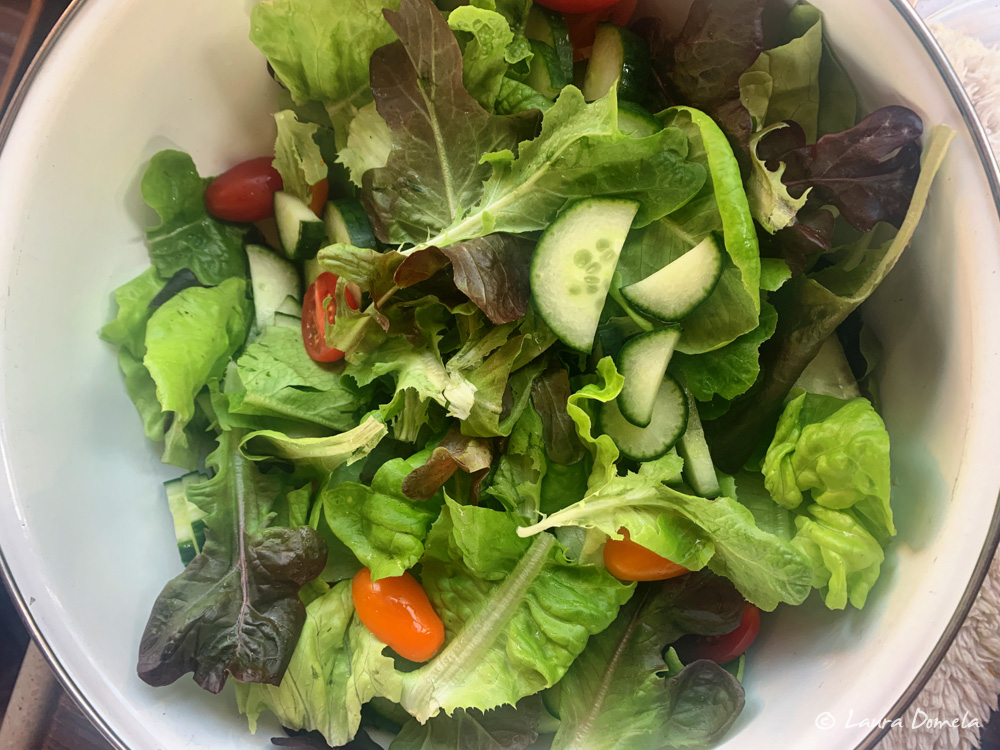 We had a fun evening and enjoyed a beautiful sunset in Effingham Bay. 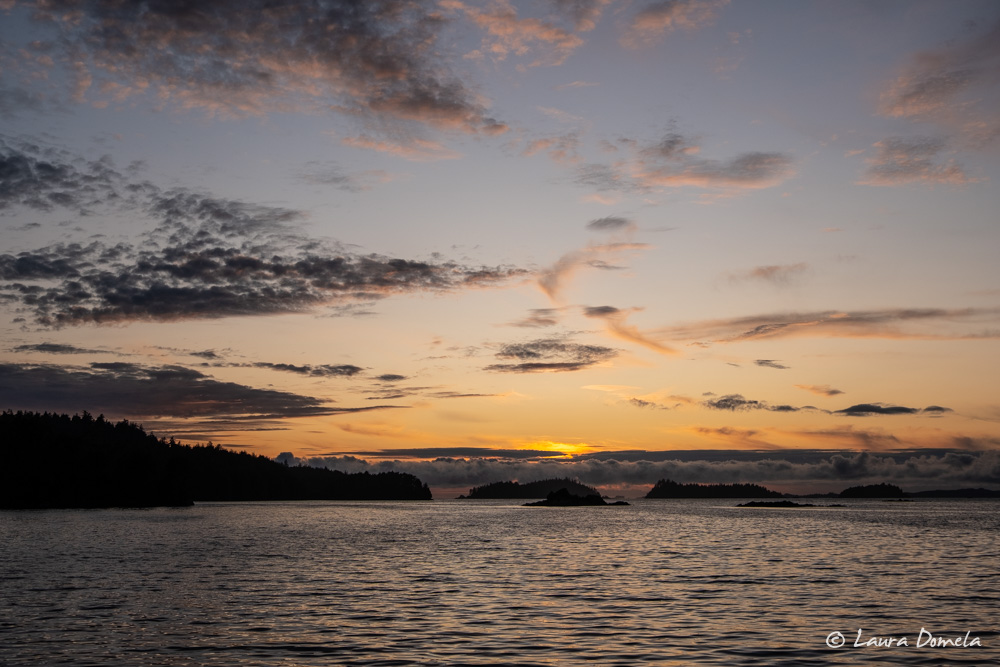 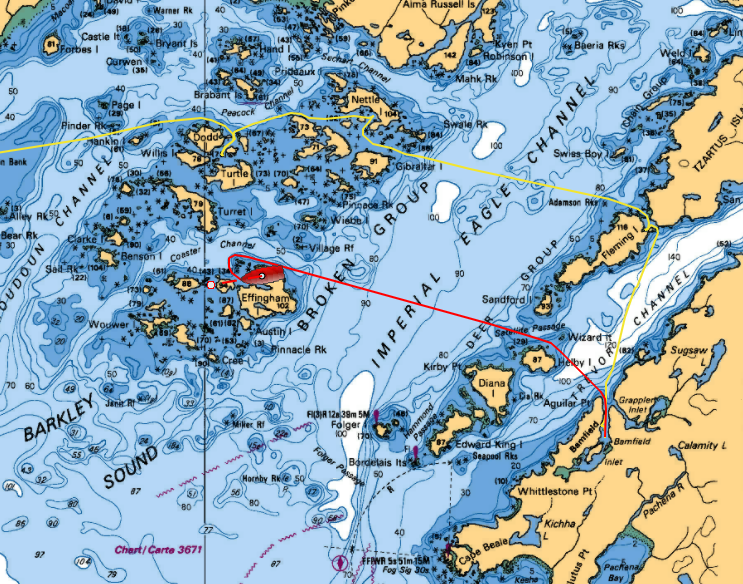 Position racks in upper and lower thirds of oven; preheat to 425°F.

Slice zucchini lengthwise to get 32 (or so) total strips, about ⅛ inch thick each.

Arrange the zucchini in single layers on 2 rimmed baking sheets. Spray each side with olive oil and sprinkle with salt and pepper.

Bake the zucchini, turning once, until tender, about 10 minutes total.

Meanwhile, combine 4 tablespoons mozzarella and 2 tablespoon Parmesan in a small bowl. Set aside. Mix egg, ricotta, spinach, garlic and the remaining mozzarella and Parmesan, 1/2 teaspoon pepper and 1/4 teaspoon salt in a medium bowl.

Spread marinara over the bottom of your baking dish. Place 1-2 tablespoons of the ricotta mixture near the bottom of a strip of zucchini. Roll it up and place, seam-side down, in the baking dish. Repeat with the remaining zucchini and filling. Top the rolls with more marinara sauce and sprinkle with the reserved cheese mixture.

Bake the zucchini rolls until bubbly and lightly browned on top, about 20 minutes. Let stand for 5 minutes. Sprinkle with basil before serving.