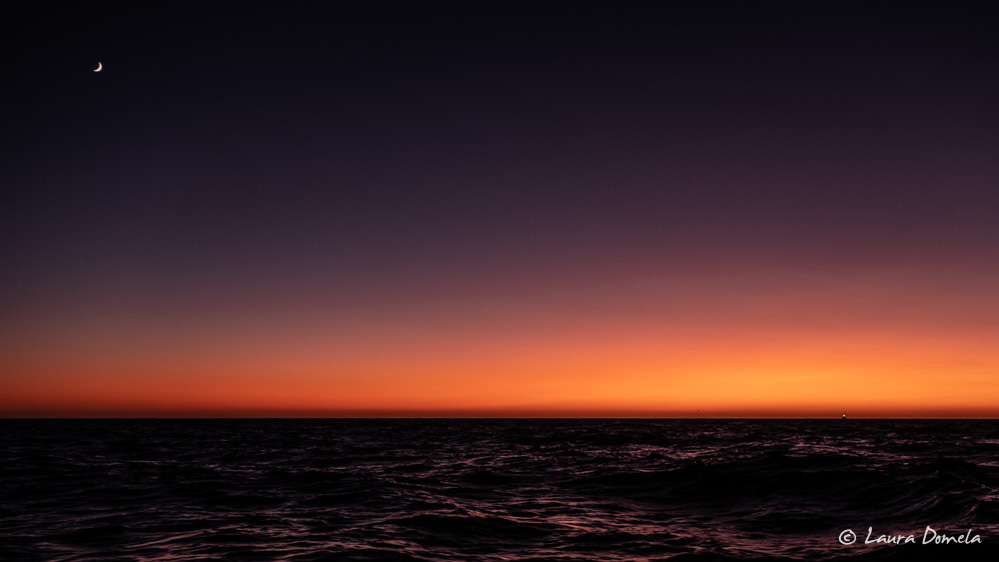 According to Rich our magic weather router, it was looking like Monday morning (September 30) would be the optimal time for us to head further south. Unfortunately, Kevin (Morris) had meetings in San Jose to attend staring Monday, so he booked a Sunday flight from Crescent City to San Jose, and the three of us (me, Alison, and Kevin Jeffries) would continue with one less crew member.

But with a few more days in Crescent City before our weather window arrived, we extended the car rental and headed back out into the redwoods for some more hiking. 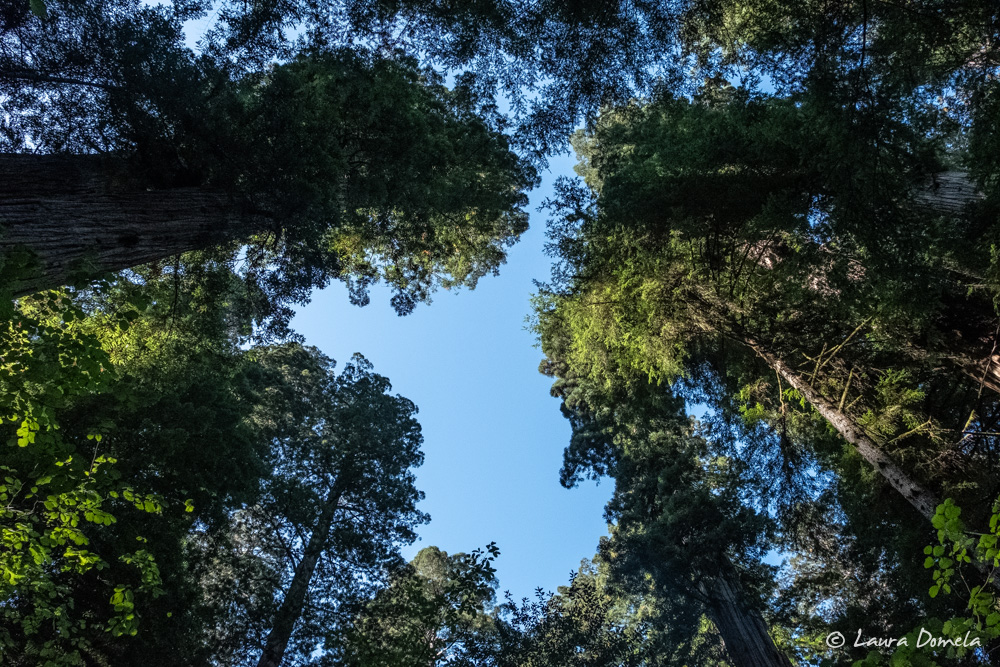 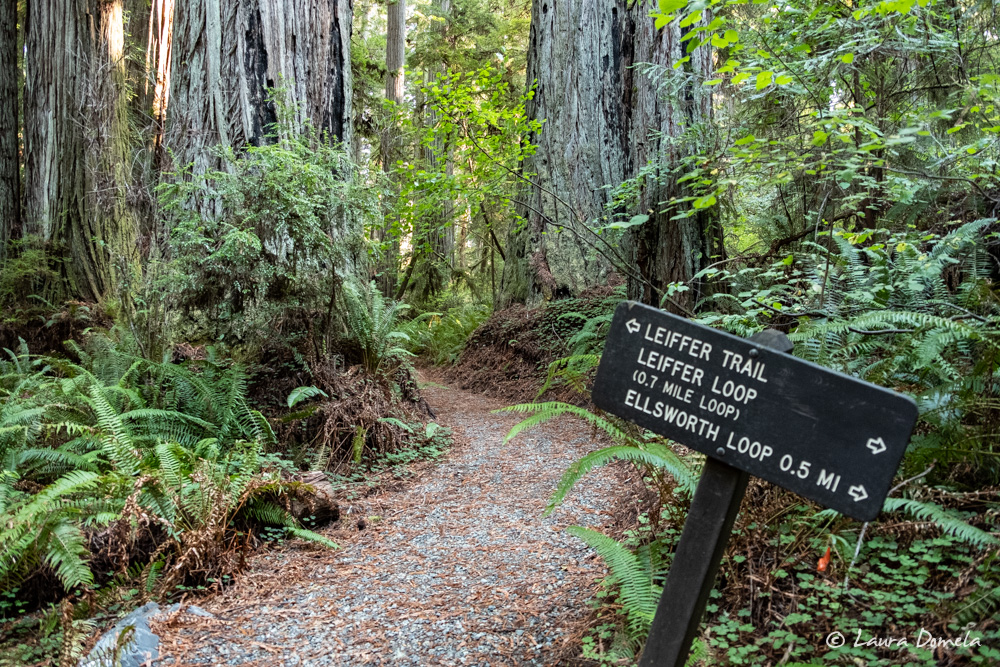 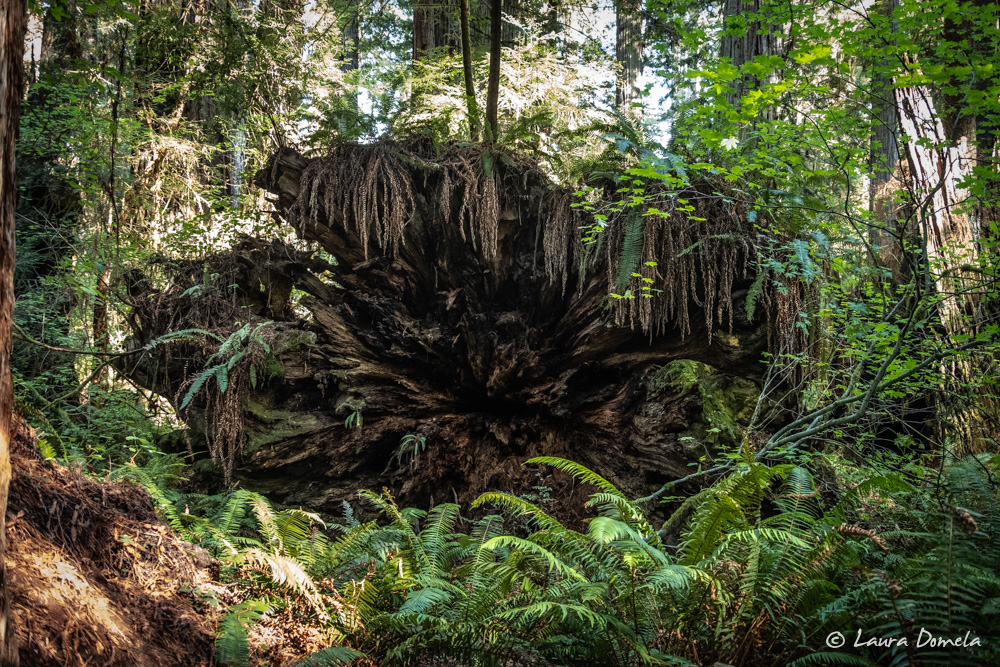 Come Sunday night, we went to bed on the early side and planned to leave Crescent City at first light in the morning. Instead of going to San Francisco, we planned to continue a bit further down to Monterey. If conditions and currents remained as expected, we will be arriving in Monterey sometime on Wednesday morning (October 2nd).

We left Crescent City by about 7:00 a.m. on September 30th with maybe 4-6 foot swells and about 10 knots of wind from the NW. The morning (and afternoon) skies were dramatic. 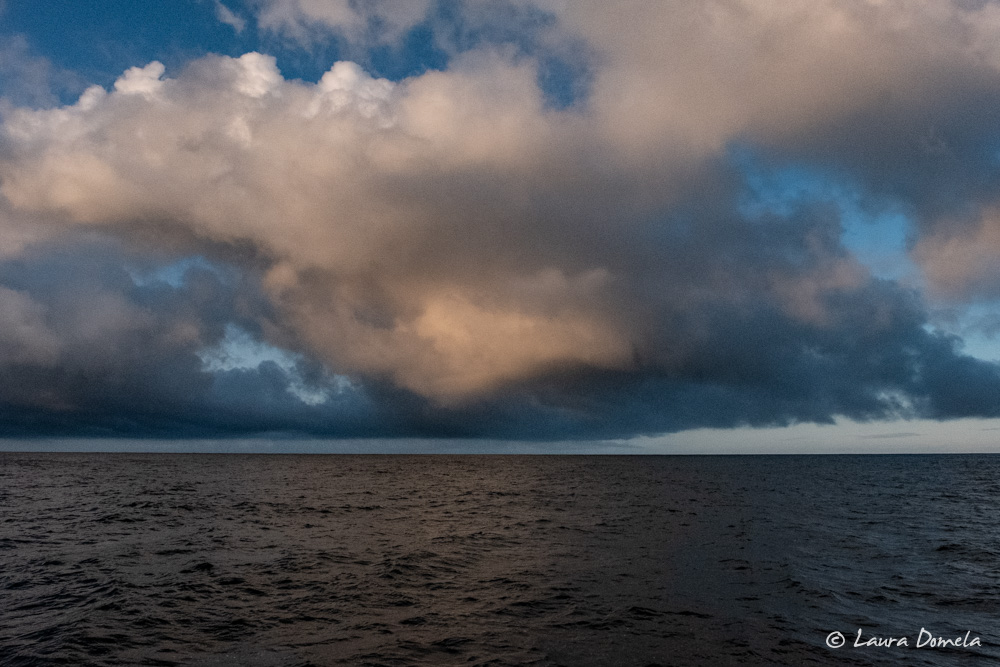 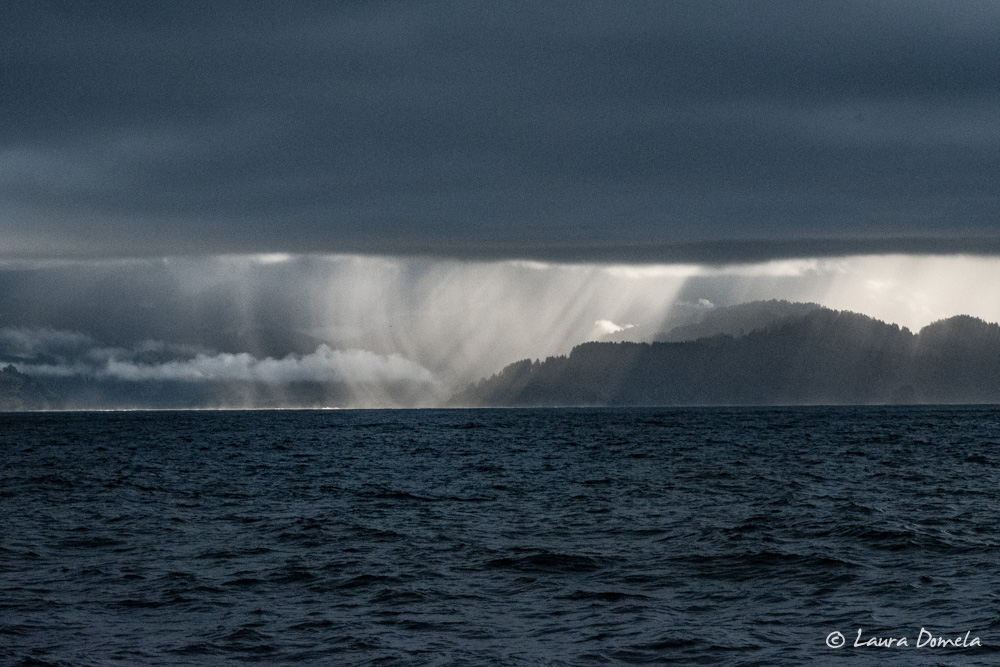 During the day we each took 4 hour shifts, getting an occasional nap in to bank some zzzz’s for the night watch hours.

Sometime in the afternoon while the three of us were up in the pilothouse, a little north of Trinidad, we spotted something bobbing in the water up ahead off the bow. Not a crab trap buoy, not a whale… 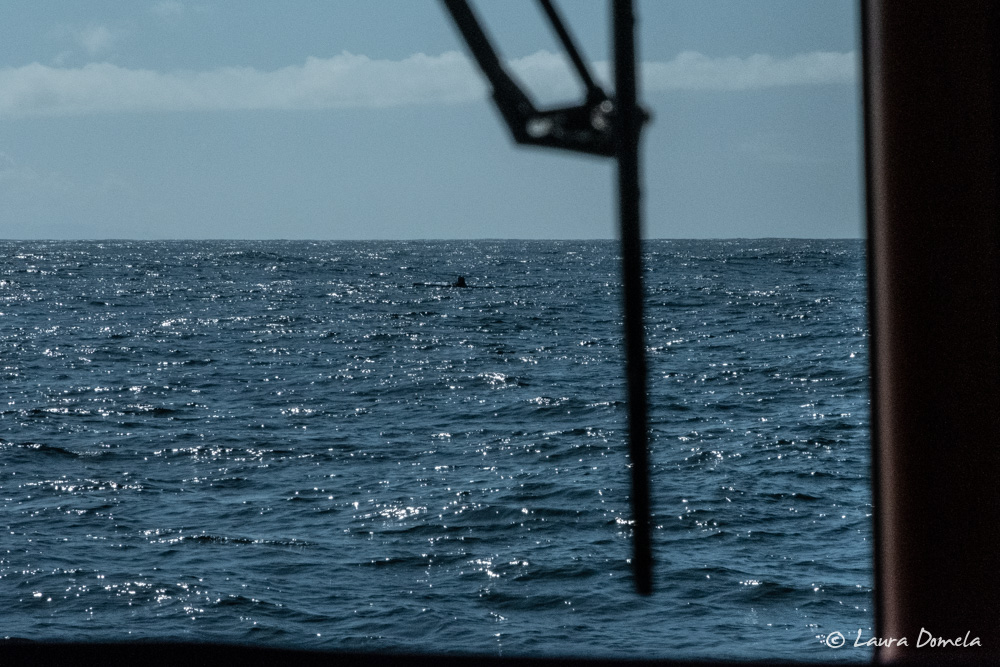 …but a kayaker!!! This guy was over 3 miles offshore! Sure the weather was nice, but the swells weren’t insignificant, and he was alone. 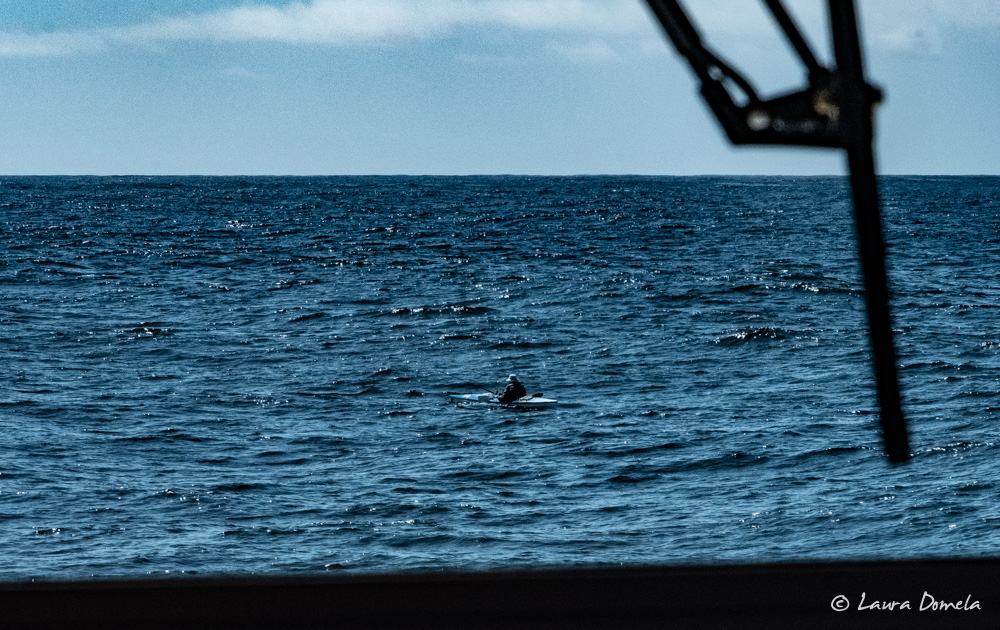 Alison yelled out to him as we passed to make sure he was okay, and he waved and responded affirmatively. He was just a dude out fishing in a kayak, with a jug of water and a paddle and a sun hat. 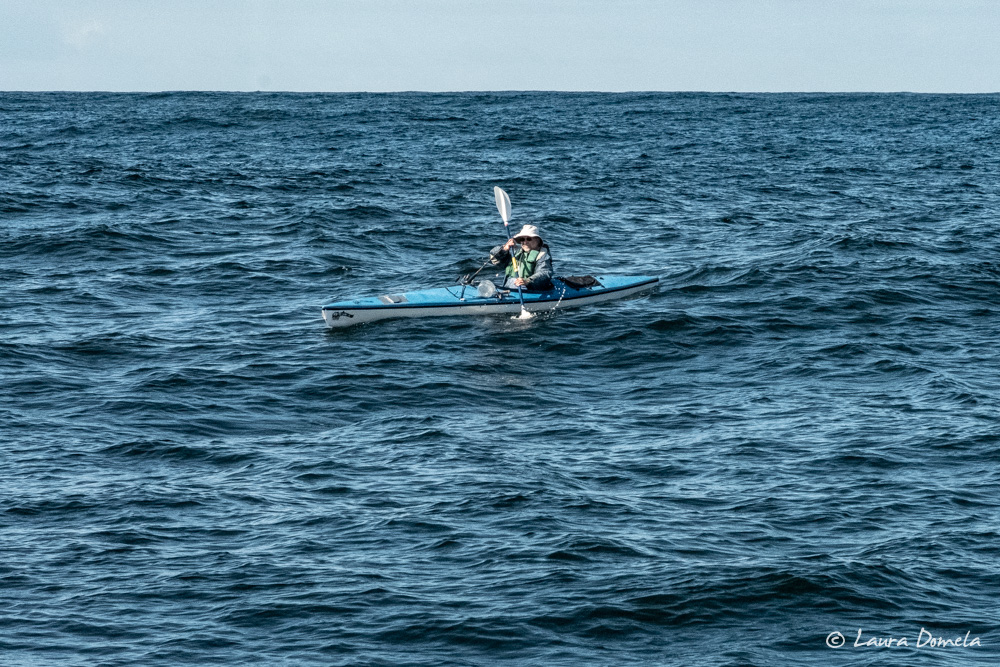 This is the view toward shore from where we passed the kayaker — not all that close, and look at those cliffs! 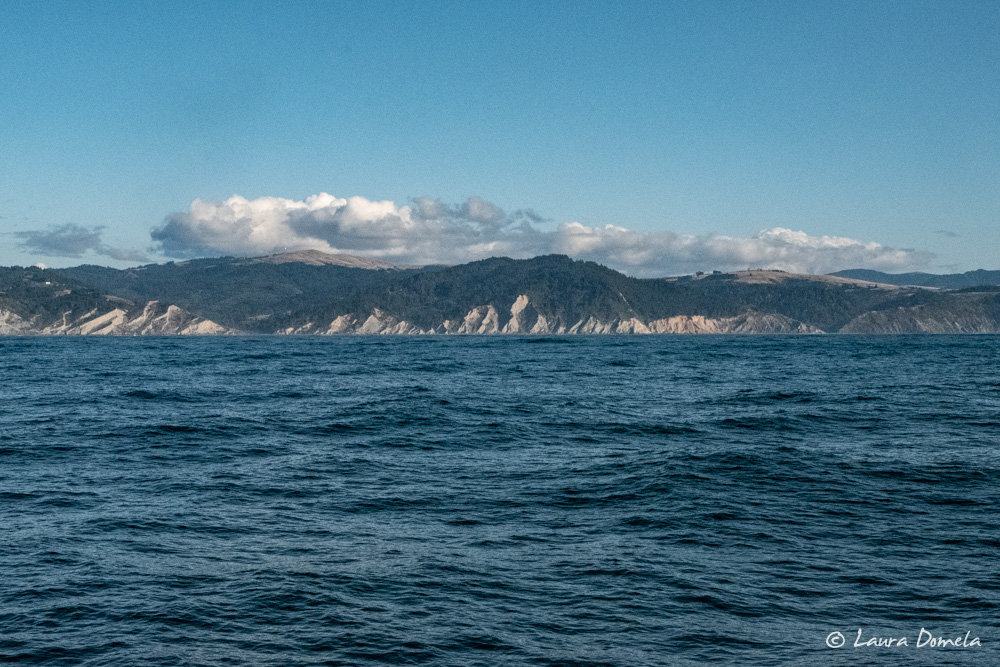 We started our night watch schedule at 7:00 p.m. Previously when we had four people, each couple had a six hour shift, and they could split it up however they wanted. With three people we switched to four hour windows where one person was on for the first two hours and the second person was backup, switching after two hours. After that four hour window, the third person joined and the off person went to nap for two hours, repeat. It worked fine, but was definitely not as luxurious as having four people.

In the morning as we continued down the coast, we cruised parallel to a large, spread-out group of humpback whales. 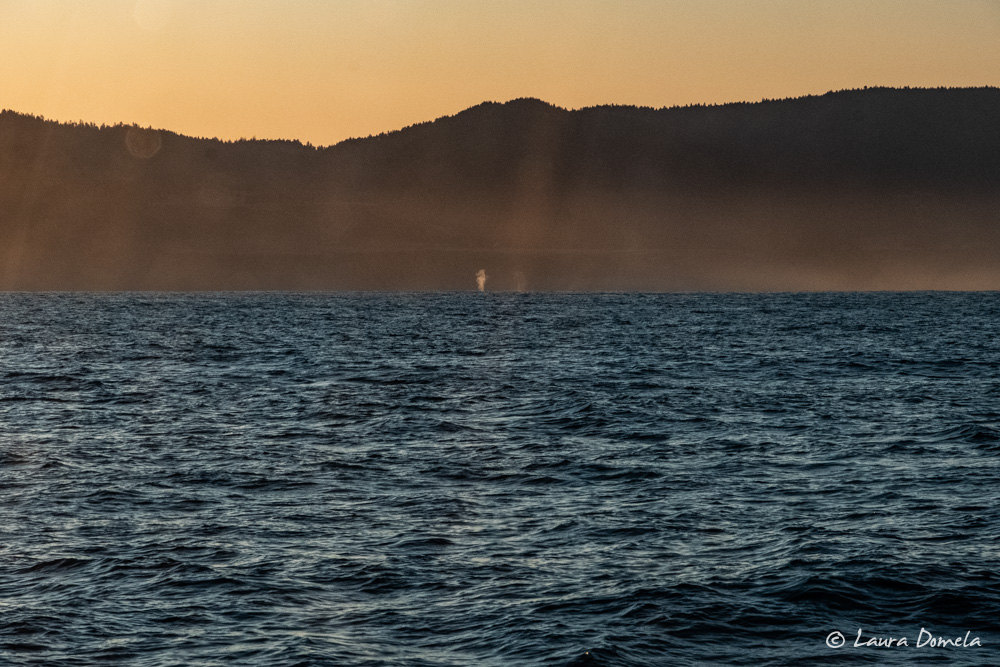 In the afternoon we saw even more, a bit closer to Red Rover than the morning whales. 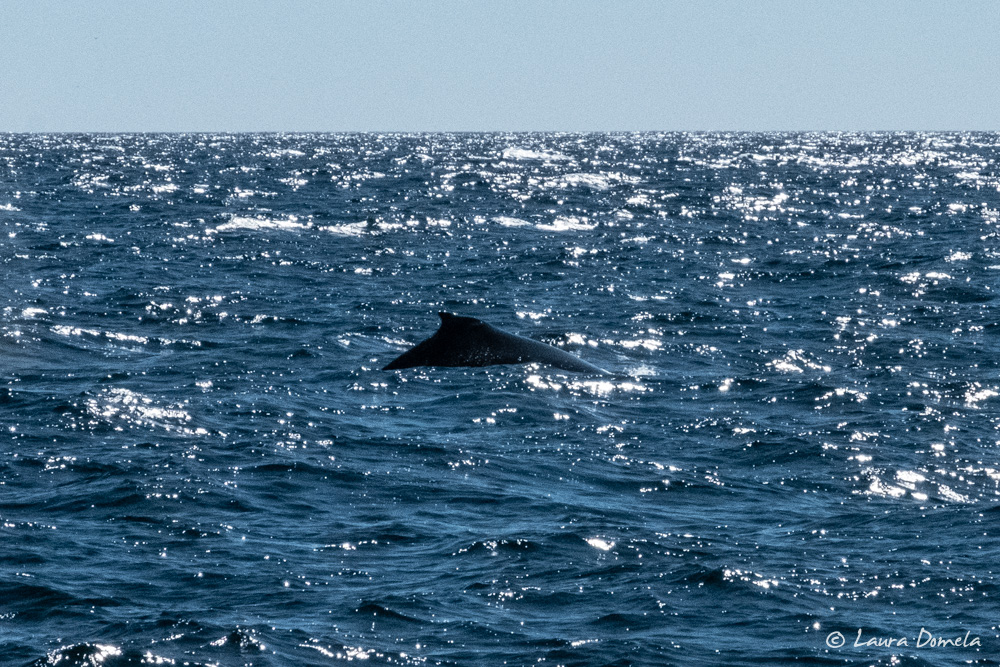 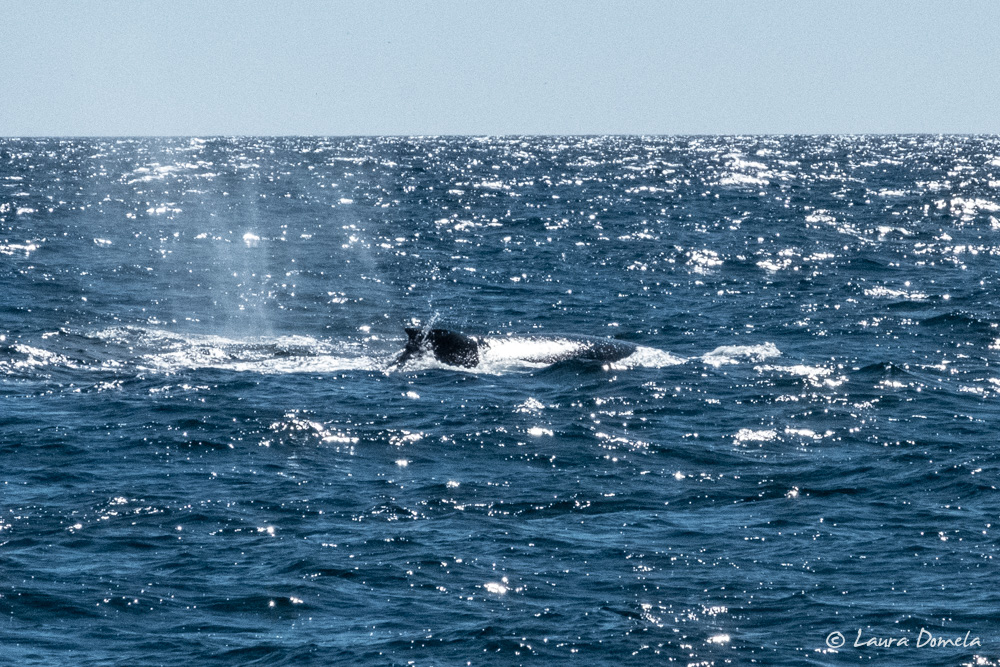 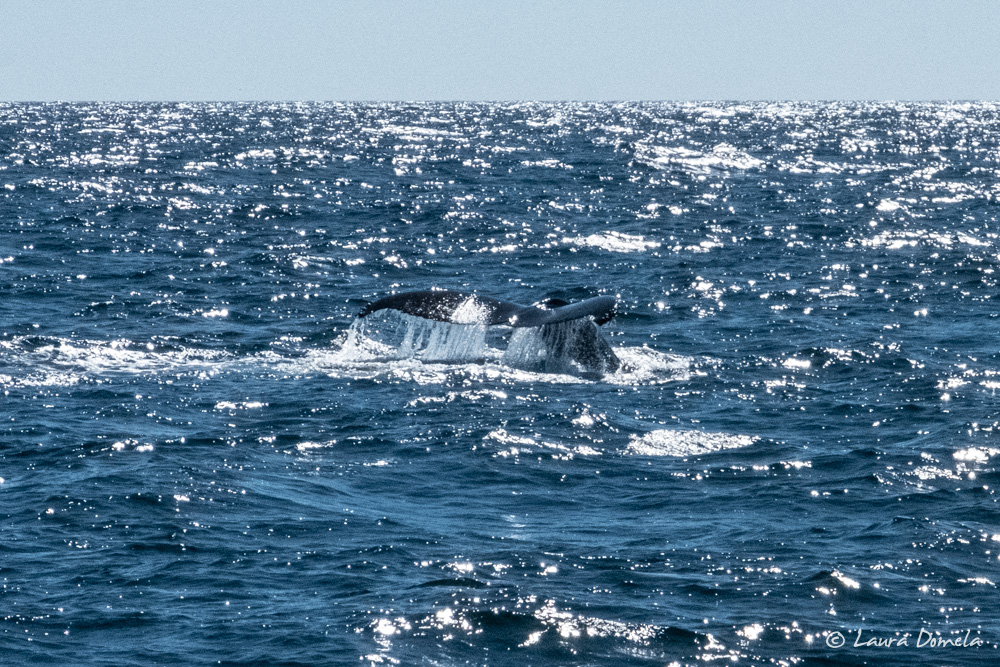 We even saw another blue whale, but didn’t manage to get any decent photos of it.

As the last night disappeared from the sky, the crescent moon became visible (along with the tiny light from a fishing boat far off in the distance). 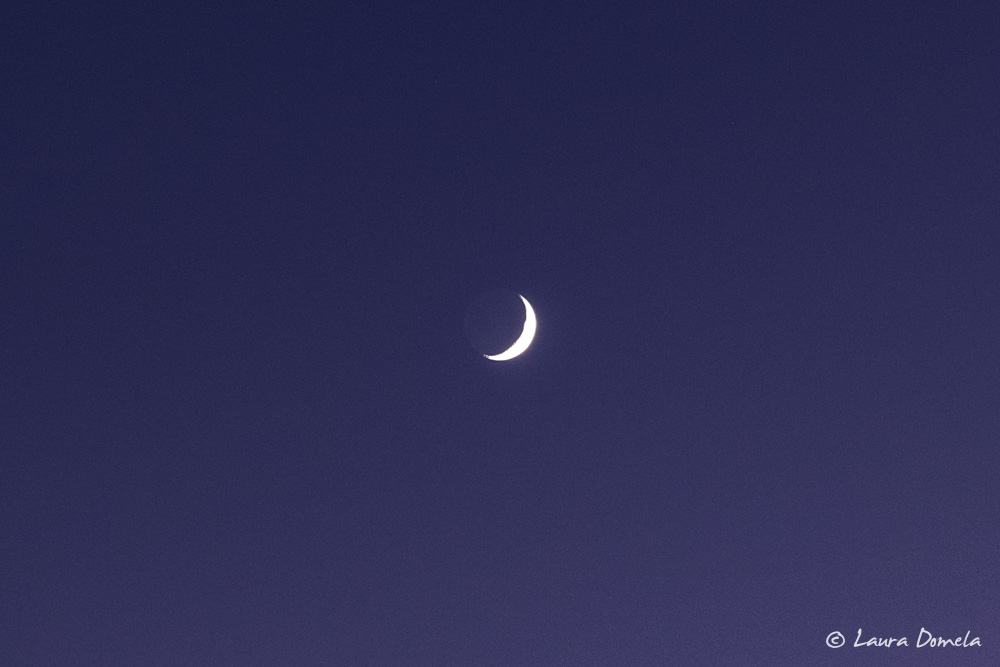 All three of us were up for sunrise as we approached Monterey Bay. 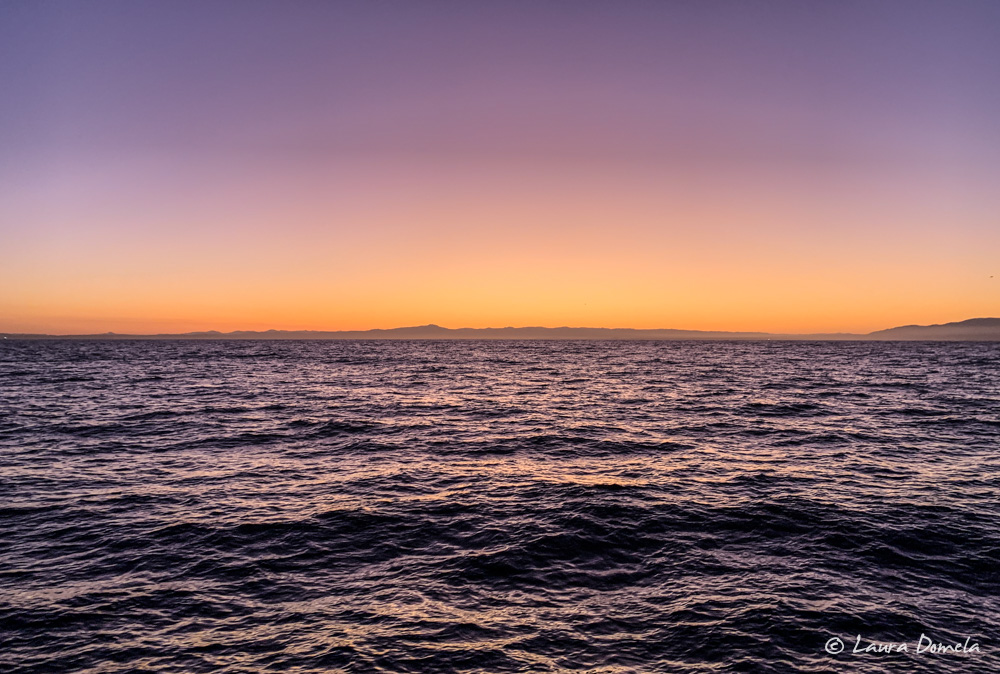 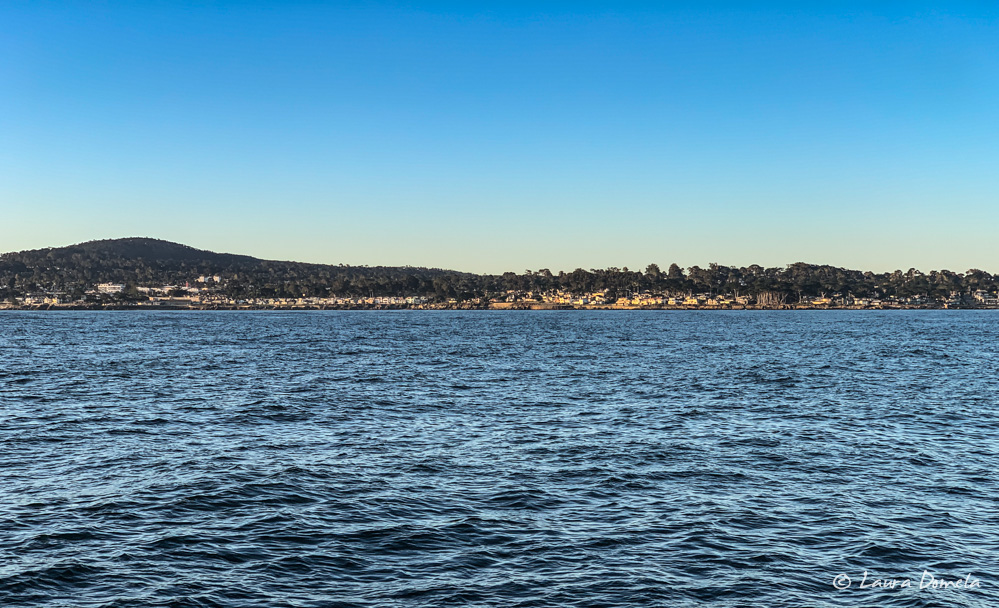 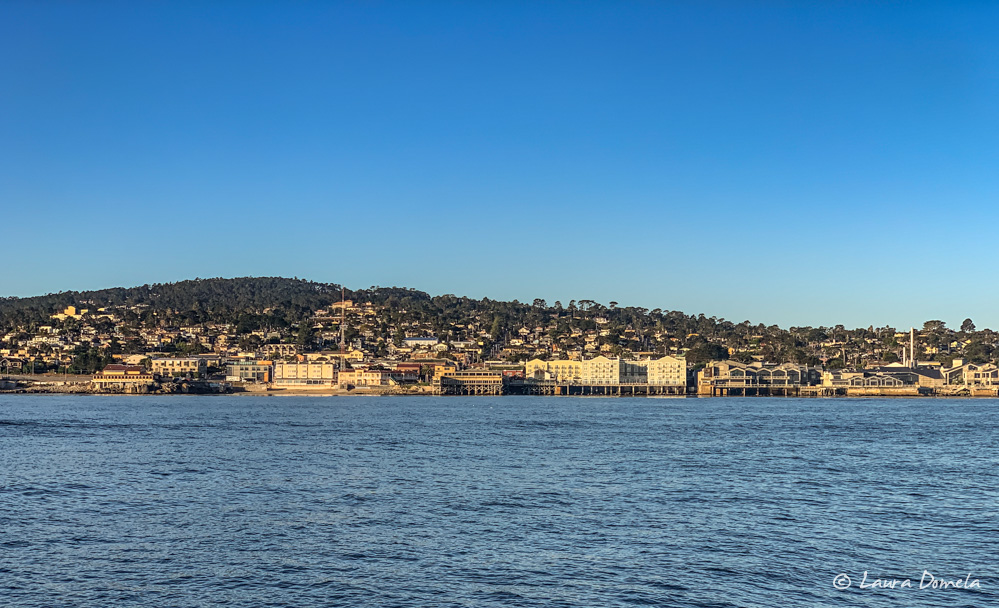 Kevin and Alison went up to walk the dogs, and I packed up my bag and then took a short nap and a shower. I had booked a flight (well, a series of flights) to return to Victoria today: Monterey to San Francisco to Vancouver BC to Victoria BC. I’d get into Victoria around 11:00 p.m., and Kevin would get in just after midnight, then we’d head back to Airship via taxi.

But before I left Monterey, the three of us plus Abby and Scott from Epoch had lunch at this little awesome spot just at the top of the dock. Osteria al Mare is a little Italian restaurant with a great view and even better food. 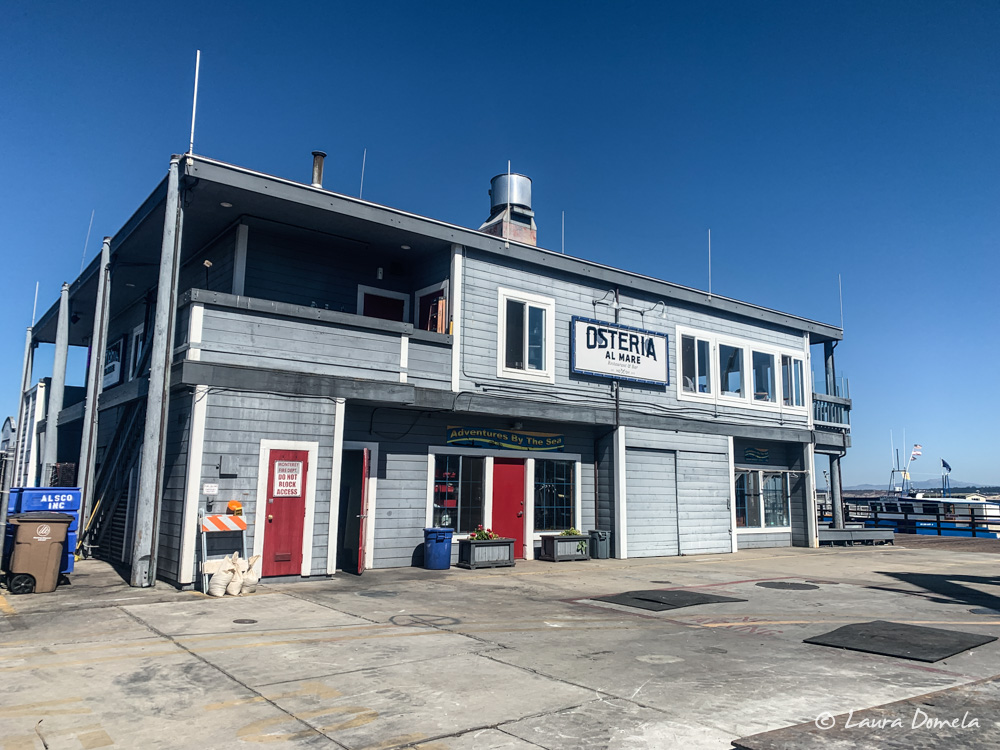 Chef and owner Maurizio Cutrignelli took wonderful care of us, explaining in great detail how he created each of the day’s special dishes, and then said if we wanted anything not on the menu to just let him know. He wouldn’t go to the store, but if he had the ingredients, he’d make whatever we requested. Fortunately, there was no shortage of incredible-sounding dishes on the menu. This was my lunch (well, brunch): porcini ravioli with truffle butter and seared sea scallops, and it was amazing. (He’s only been open in this location for a year or so. Highly recommended spot if you’re in the area!)

After lunch and some heartfelt goodbyes, I grabbed a Lyft to the Monterey Regional Airport and hopped on my first flight, which was a whoppin’ 18 minutes in the air to SFO. I had a three hour layover at the airport in Vancouver BC, but all the travel back to BC was super smooth. I received a text from our friend Scott (who was on our last flotilla down the west side of Vancouver Island on the Selene named Impulse)…he was in Victoria and offered to come pick us up from the airport (at midnight!!!) I insisted we could cab it, but he insisted it was no problem and he’d like to, so we got to visit with Scott on our way back to Airship! Bonus!

We slept hard for maybe 12 hours, and then met up with Scott for dinner last night in Victoria (tried a new place called Wind Cries Mary on Bastion Square…good cocktails, small plates to share, cool ambiance) and we will stay here until Saturday (October 5th) before taking Airship back to Anacortes.

Here’s a quick screen grab from OpenCPN showing Leg 3 from Crescent City to Monterey (not our actual route):

Kevin and Alision will continue cruising Red Rover down the coast of California, and they plan to spend the winter in Mexico before heading back to the Pacific Northwest in the spring of 2020. It’s likely we’ll fly down to meet back up with them in Puerto Vallarta this winter, but if you want to continue following as they make their way south, here’s a link to their blog!