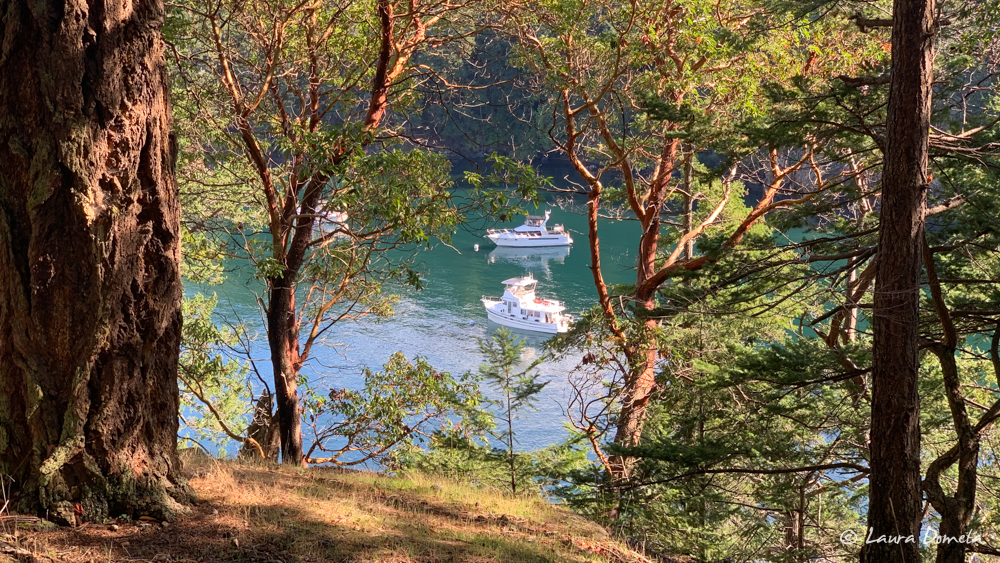 As the upgrades on Airship get closer and closer to being finished (I know, very funny), we’re getting antsier and antsier to be out on the water. Summer’s over and we’ve only spent about 3 days aboard, which in a normal year would be closer to 7 months aboard, so this is quite a change. But this year is different than most, by far.

The new Victron lithium batteries and inverters are installed and working, the new Blaze grill is installed, and with the only thing left being a few finishing touches on the watermaker install, we decided to head to LaConner and go out for a week or so….for testing purposes, of course.

Our friend Steve Mitchell also happened to be cruising around the islands and we were able to meet up with him for a few days for some socially distanced buddy boating, hiking, and happy hours. We even got to connect with Sam and Anna on Akeeva one night over on San Juan Island! We’ve really missed the social aspect of cruising around with friends, so this was a very nice surprise!

We left LaConner late in the day, so we anchored the first night at nearby Saddlebag Island, in the fog. There was just one other boat there, and we enjoyed a quiet night at anchor. In the morning the other boat left, and we headed to shore in the dinghy to hike around the island.

The wind was forecast to be a bit more sporty the next night, so we headed over to Eagle Harbor on Cypress Island and anchored out past the mooring balls. Most of the balls were full, with about a dozen or more boats in the harbor! I thought I’d snapped a photo of the anchorage full of boats, but apparently I didn’t. This was from on our way over from Saddlebag to Cypress Island:

One of the things new this summer is this convertible ottoman/table we designed and had our friend Frank (who also did our floors and cabinet modifications last summer) build for us. It turned out GREAT and we couldn’t be more pleased. Originally we were having a high-low table custom built for Airship, but after a long series of mishaps with the builder and his finisher, and spending our first  summer with an ottoman we picked up as a temporary thing, it turned out that we really loved the openness of the ottoman. Yes, we sometimes missed having a table, and I’d been percolating on this idea for a couple years…so as luck would have it, the timing was fine for the table falling through. I downloaded and printed some graph paper, and eventually we made it happen! 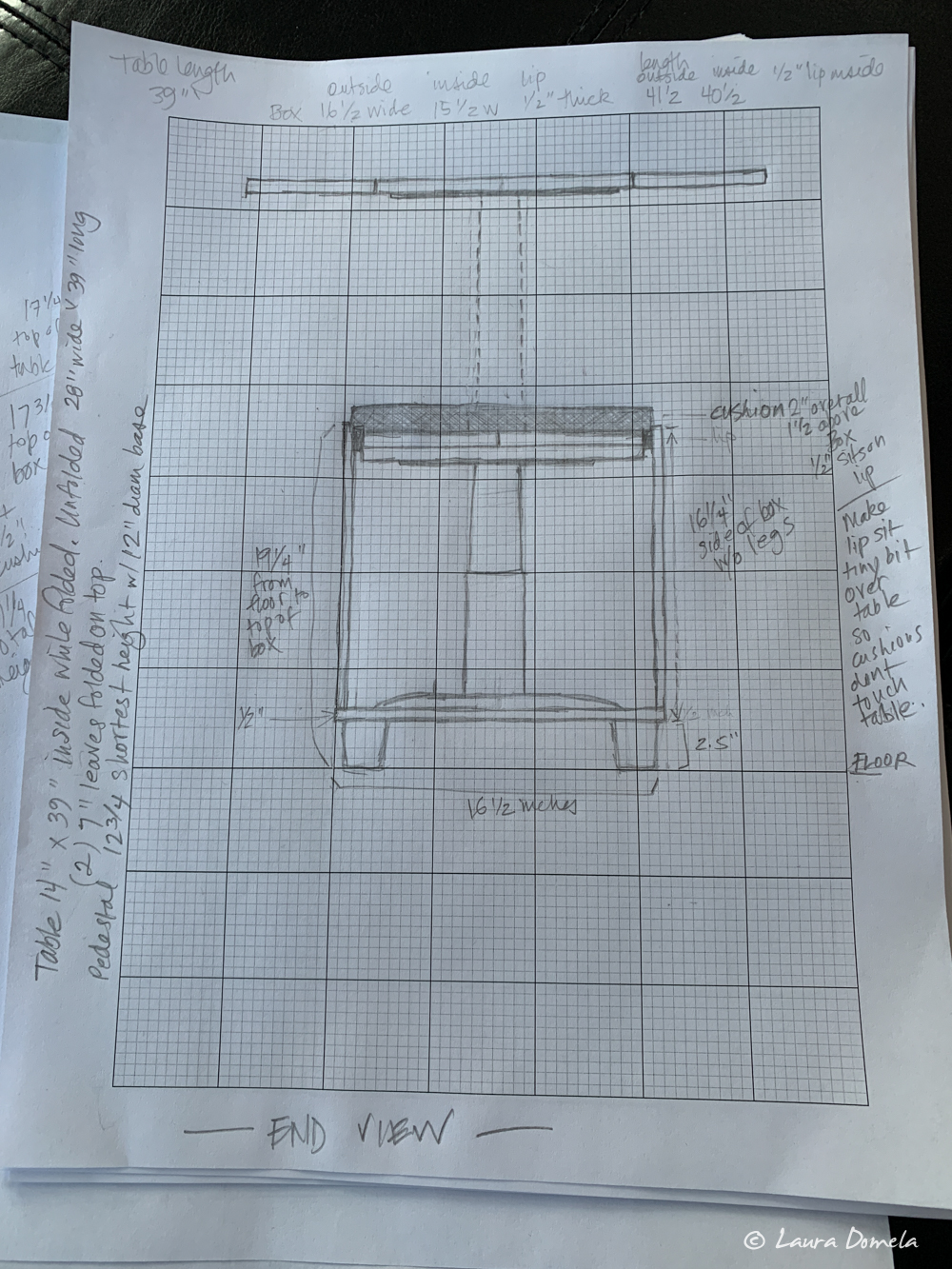 When you first remove the cushions, the folded tabletop is obviously in the way of you getting to the lever on the pedestal to raise/lower the table, so Frank made a little mouse hole with a teak sliding door that allows access to the lever (so cute!!): 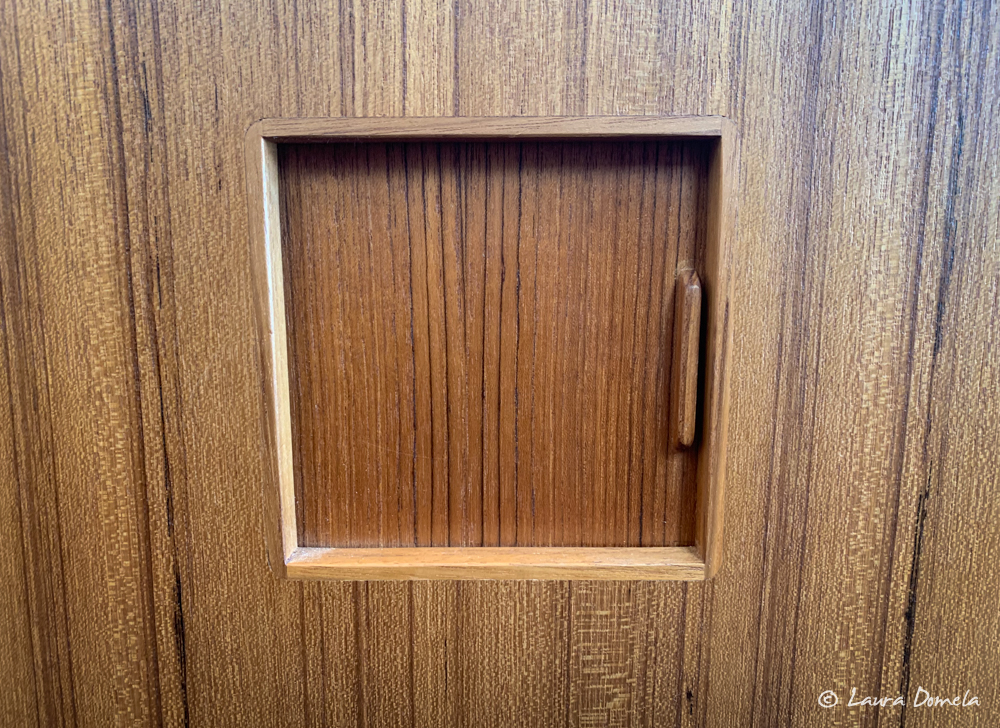 We just love it!

Anyway, back to Eagle Harbor. We put out a couple crab traps and collected two keeper Dungeness crabs, which I later made into a lemony crab risotto.

Next, we headed out to meet Steve at Stuart Island. We took at peek at the north Jones Island anchorage, but it was pretty full (boats on the dock and all mooring balls full), so we opted for Prevost Bay on Stuart Island instead.

It was foggy the whole way over, especially on the north side of Stuart Island, but we managed to catch a quick glimpse of two minke whales in the fog as we rounded the tip of the island. They were close, but quickly out of view in the fog, so no photos.

We had a socially distanced happy hour with Steve on our top deck and watched the sun go down.

In the morning, we cruised down to Westcott Bay on San Juan Island to wait out a small craft warning.

Not far from where Airship anchored is the dock to Westcott Bay Shellfish Co. According to their website, you can order shellfish online for dockside pickup on Fridays and Saturdays between noon and 3pm. Lucky for us, the timing was perfect — it was Thursday! So we ordered two kinds of oysters (one for raw/half shell eating, and the other for grilling) and a couple pounds of Manila clams for some spaghetti alle vongole!

Our friends Kerri and Tim showed up the night before while it was super rainy, so we didn’t get to say hi until the next morning before we left. We’ve known Kerri since way back during Airstream days. She’s now with Tim and they’ve ditched their respective land vehicles and now travel the water in this beautiful 1978 Baba 35 named Meriwether.

The forecasted gale showed wind gusts from both the SW and SE, with top speeds of about 42kts, so we decided we’d (together with Steve on Rendezvous) head up to the north side of Jones Island, which is pretty protected from any south winds. There’s really only one spot to anchor, and all three mooring balls were empty so we each grabbed one, then headed to shore for a hike while the weather was nice.

Overnight the wind seemed like it came from everywhere, but it was probably just wrapping around into the bay. It was a little bumpy, but the anemometer never showed anything above 18kts.

The next morning, the wind picked up quite a bit though, and it rained heavily. The rain stopped for a while, so the three of us once again headed to shore–we wanted to see what the south side looked like in this stormy weather.

We ended up hiking around the east island trail, since we’d done the west side the day before. Gorgeous views, some rugged terrain, and lots of wind and waves. When we returned, we were greeted with a nice rainbow!

The next morning, we followed Steve in Rendezvous over to West Sound on Orcas Island, where we anchored up near Skull Island in Massacre Bay (oooh, spooky!) We’ve been up here before (on Halloween, actually!), but not for a few years.

We all had some work to do, so we planned to meet around 5 and dinghy over to Skull Island, where we scrambled up to the “summit” (a whoppin’ 30 feet or so!) and had a great visit and happy hour with a lovely view.

Pretty soon it was dark, and even though we were certainly not done telling stories and laughing, we opted to head back before we couldn’t see our way. We picked our way down the rocky landscape and back to the dinghies, which were a little bit, um, out of the water (not too far though), so we helped each other drag theirs back to floating safety and said good night.

It was so nice to be out on the water, as well as to have some in-person but distanced socializing. This is such a strange time, and the peaceful scenery of the islands, the sound of water lapping the sides of the boat at night, and even the howl of the wind and rain, was so wonderful. We’re looking forward to being back up in a week or so…fingers crossed!

2 thoughts on “Socially Distanced Buddy Boating in the San Juans”