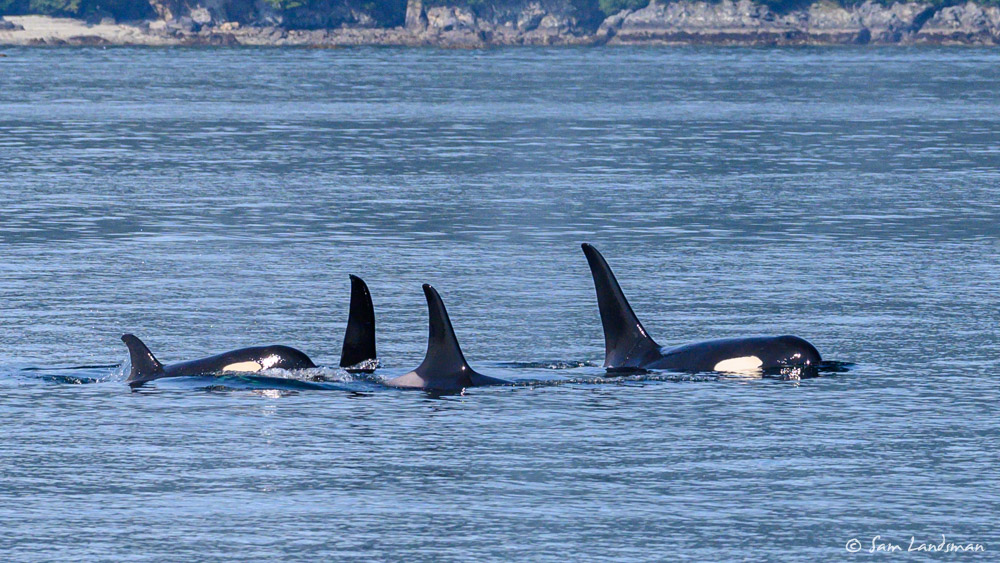 First impressions of a cruising destination have a huge impact on my opinion of a place. Years ago, when I first arrived in Red Bluff Bay, for example, half a dozen brown bears were foraging (and mating) on the beach. Ever since, I’ve associated Red Bluff Bay with the spectacle of mating bears. The same thing happens with negative first impressions. One year we arrived in Ketchikan in pouring, soaking rain, then spent another horribly rainy, windy day at the dock before the weather improved enough to walk around without full rain gear. Not a single person in the group seemed excited to return.

Prince William Sound made a magical first impression. We arrived on a calm, sunny day, warm day and dropped anchor in a staggeringly beautiful spot–Barnes Cove, in Drier Bay. Had our visit coincided with worse weather, I wonder if we would be so enthusiastic about the place.

Cruising in a new-to-me area is fun, rewarding, and a lot more work! Most of the Inside Passage is a series of long, fairly narrow channels–it’s almost linear. We tend to travel mostly in one direction for awhile with little backtracking, finding interesting anchorages along the sides of these channels. Prince William Sound, by contrast, is more like a semi-circle, with a large, open area in the middle and islands, inlets, and fjords along the edges. It’s kind of like a giant Glacier Bay.

A new cruising area presents a number of challenges, chief among them: “where to go?” We have limited time in Prince William Sound, certainly less than a month, and maybe just two or three weeks, so we don’t want to waste time. The best cruising guide to Prince William Sound we’ve found is Cruising Guide to Prince William Sound by Jim and Nancy Lethcoe. It’s an excellent resource, filled with history (from the geologic processes that shaped the area to the Exxon Valdez disaster), diagrams, and descriptions. Each anchorage includes information about hiking opportunities and dinghy exploration possibilities, too, which is a valuable addition compared with many cruising guides.

While cruising guides are great for getting specific information about an anchorage, I rarely find them useful for finding the “best” anchorages for scenery, wildlife, and activities. They are often dryly written, with little of the excitement or emotion that conveys “you have to come here!” For that, local knowledge is king. I found three online resources particularly helpful for Prince William Sound: Tony Fleming’s videos, James and Jennifer Hamilton’s Dirona blog, and Peter Hayden’s Tanglewood blog. Each of these gave me a better feeling for specific places that were worth seeing. Several friends were also super helpful via emails and text message. Thank you to everyone who sent suggestions!

Anyway, back to Barnes Cove and first impressions. We arrived in Barnes Cove after a calm, beautiful, uneventful 350nm non-stop trip from Lituya Bay. We’d spent two nights underway, but arrived well-rested and ready to explore Drier Bay. The weather, scenery, company, and wildlife—even the boat, having just performed flawlessly on our longest passage to date, all combined to make a very positive first impression.

In the warm afternoon air, we dinghied around Drier Bay and found a some cannery ruins:

Then we did our first “knoll walk” in Barnes Cove. In Southeast Alaska, nearly all the shoreline that is flat enough to walk on is heavily wooded—impenetrable, really, by casual hikers. In Prince William Sound, by contrast, much of the shoreline has pockets of un-forested areas. From a distance they look fairly flat and uniform, carpeted almost, but up close they’re fascinating. The moss is thick, several inches or more, and completely saturated with water. It feels like walking on a sponge. The topography is varied, with creeks and rivulets, ponds, and natural viewpoints. There are no trails. Locals talk about their favorite places to hike, hunt, and even backcountry ski in springtime.

The good first impression of Prince William Sound continued the next day. We’d read that orca whale populations in Prince William Sound never recovered from the Exxon Valdez disaster. So when we saw a small group of orcas on our second day, we stopped the boat. They swam towards us, disappeared for awhile, then emerged on the other side. 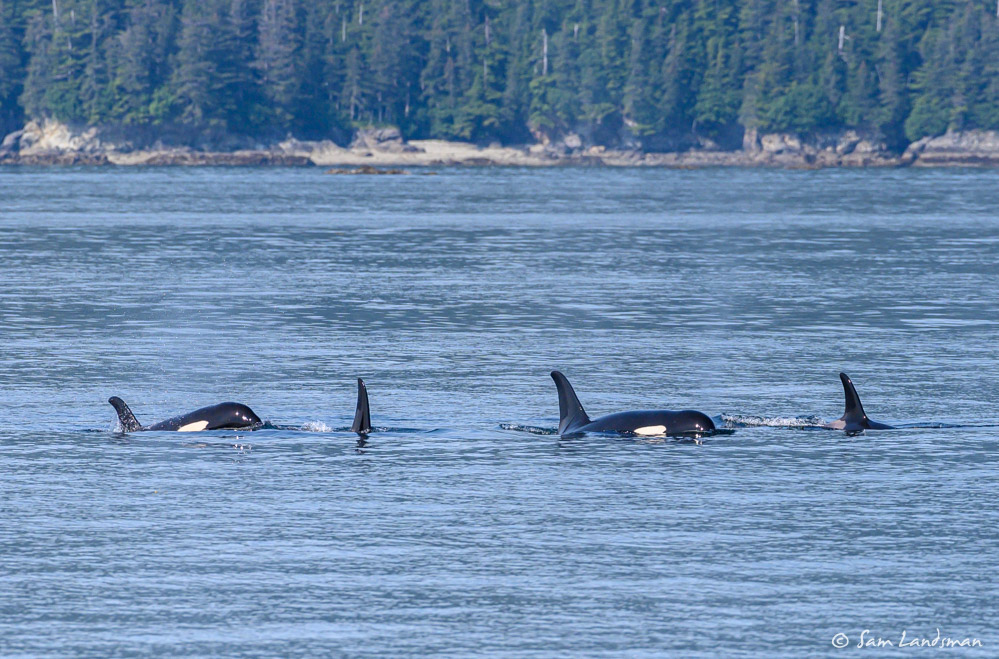 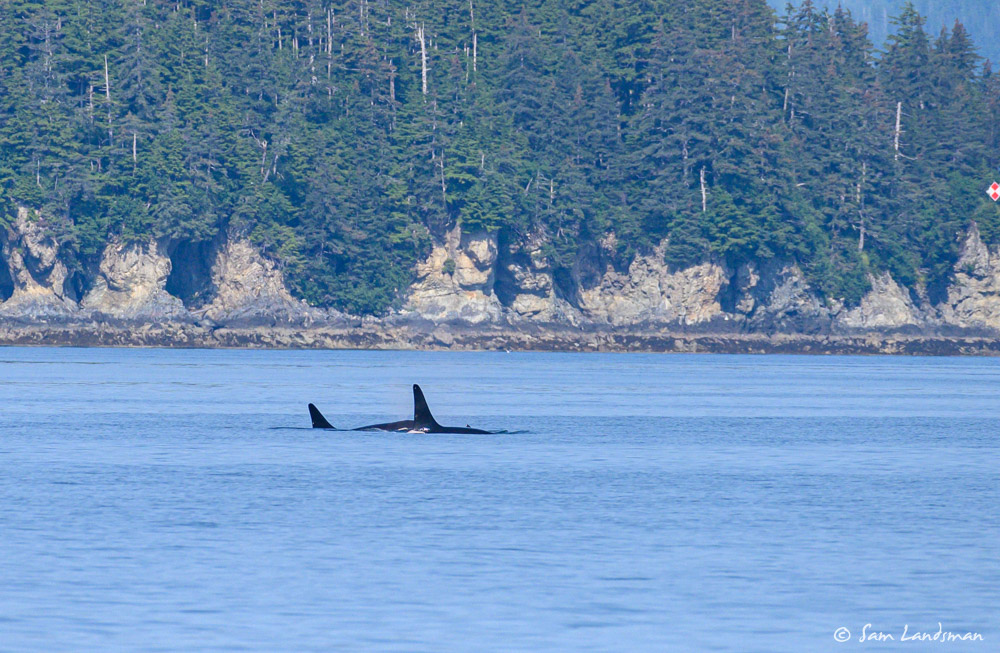 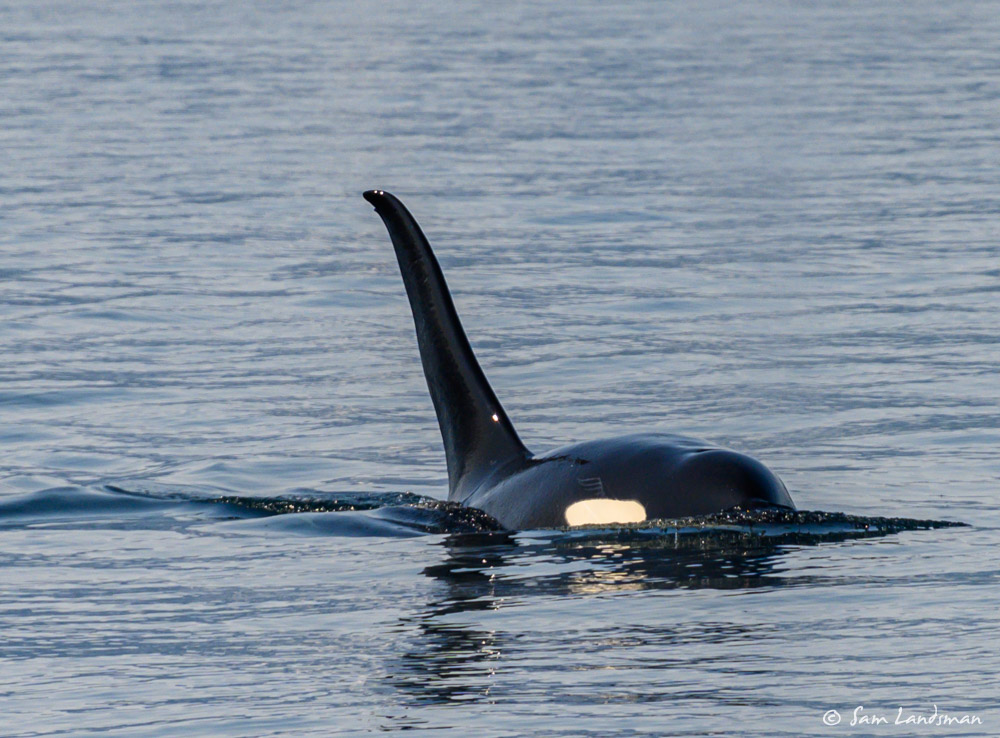 The nice weather continued our second day. Sunny, light wind, mid 70s. Friends mentioned that Deep Water Bay had a sandy beach. A day at the beach sounded pretty nice. The anchorage is a bit tenuous (deep and steep-to), especially since it was so crowded with local boats, but we managed to get a decent set and headed for the beach.

Deep Water Bay turned out to be a wonderful stop. We visited with locals (including a tour of Wyrill, a 62-foot wooden powerboat built by Boeing in 1931), drank too much, swam (all of us, in Alaska!!), and read on the beach. It felt like vacation.

With our beach day behind us, we turned our attention towards Blackstone Glacier on day three. We didn’t know exactly where we’d anchor, but as we motored up Blackstone Bay, we settled on a particularly scenic location along the south shore, just outside Blackstone Glacier’s southern terminal moraine/bar.

We went to shore and walked along the bar at low tide. This is a gorgeous spot: white and grey peaks in nearly every direction stand in stark contrast to the bright blue sky and verdant moss, grass, and trees. 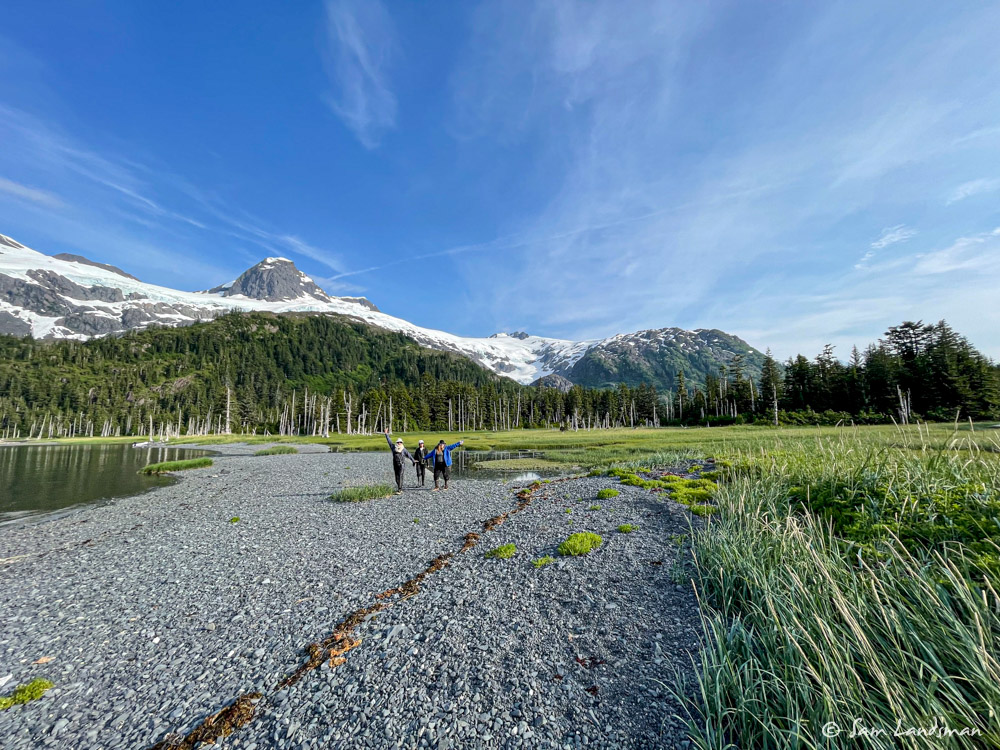 What looks like a green smudge from afar appears much more complex up close. Marshlands and saltwater inundated forests made for interesting sightseeing. 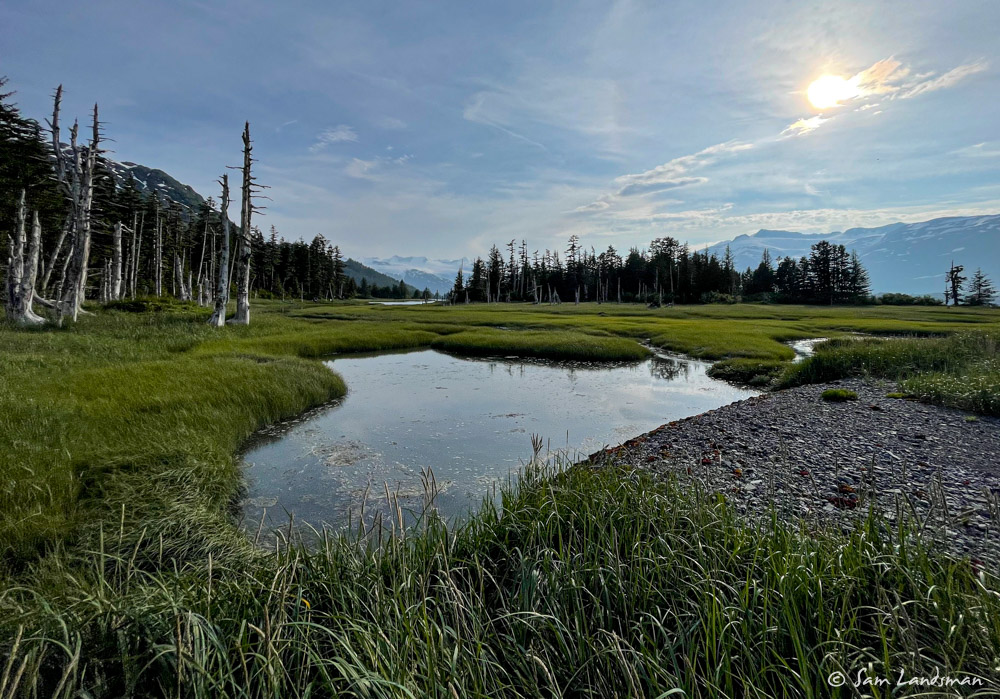 We also explored by dinghy. Blackstone Glacier is just a few miles from where we anchored and two snouts of Blackstone Glacier reach the bay. On the day we visited, both were free of large icebergs and it was easy to get as close as we dared to the glacier face. Arriving by dinghy offers a different glacier viewing experience than arriving by mothership. Everything is more raw when you’re stuck outside in a tiny boat: the wind feels fiercer, the chop more ominous, the calving more threatening. But zooming among the ice is thrilling, touching the rocky shoreline with our hands is possible, and approaching waterfalls close enough to feel their mist is enchanting.

One of the strange things we noticed about Blackstone Glacier was the traffic. At first we were shocked to see a group of jet skiers arrive, then another, and another, and another. Every few hours a new group of seven or eight came through, along with kayak groups and large, fast catamaran tour boats. Blackstone Glacier is just 15 miles from Whittier, which in turn is just an hour or so by road from Anchorage, and it’s very popular with tour groups. Jet skis tours are just one of the offerings.

Rather than returning directly to Akeeva, we dinghied “the long way” around Willard Island, stopping a few times to check out hiking opportunities. 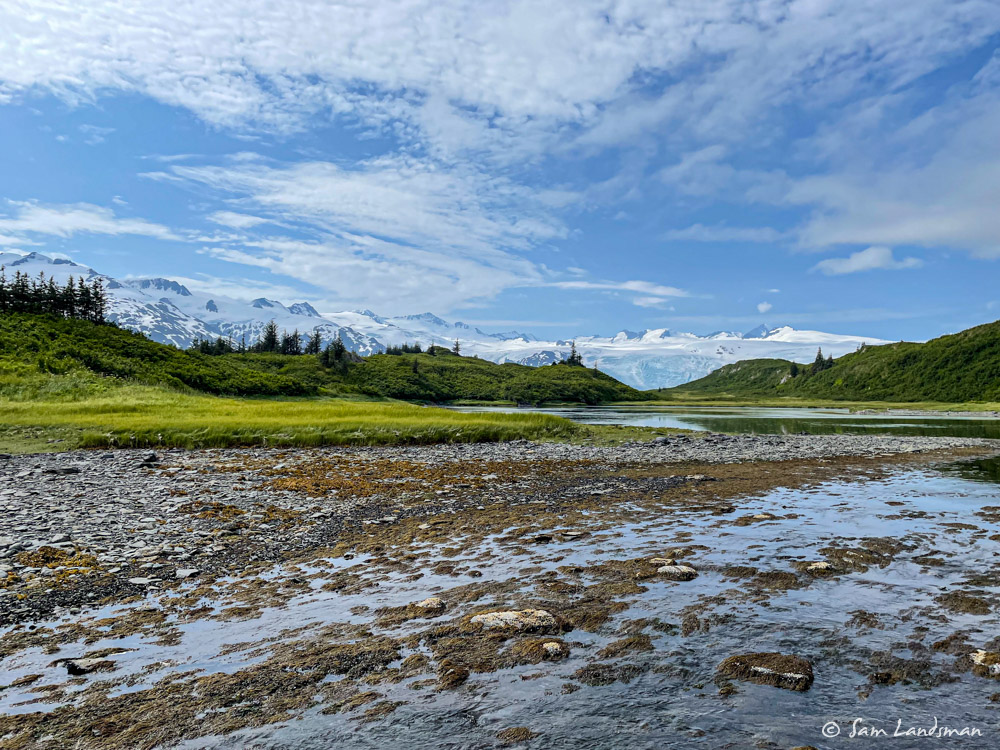 Alas, the bears had other ideas. Moments after taking the above picture, we spotted a brown bear on the opposite side of the lagoon. Having no desire to test our bear spray, we returned to the dinghy. 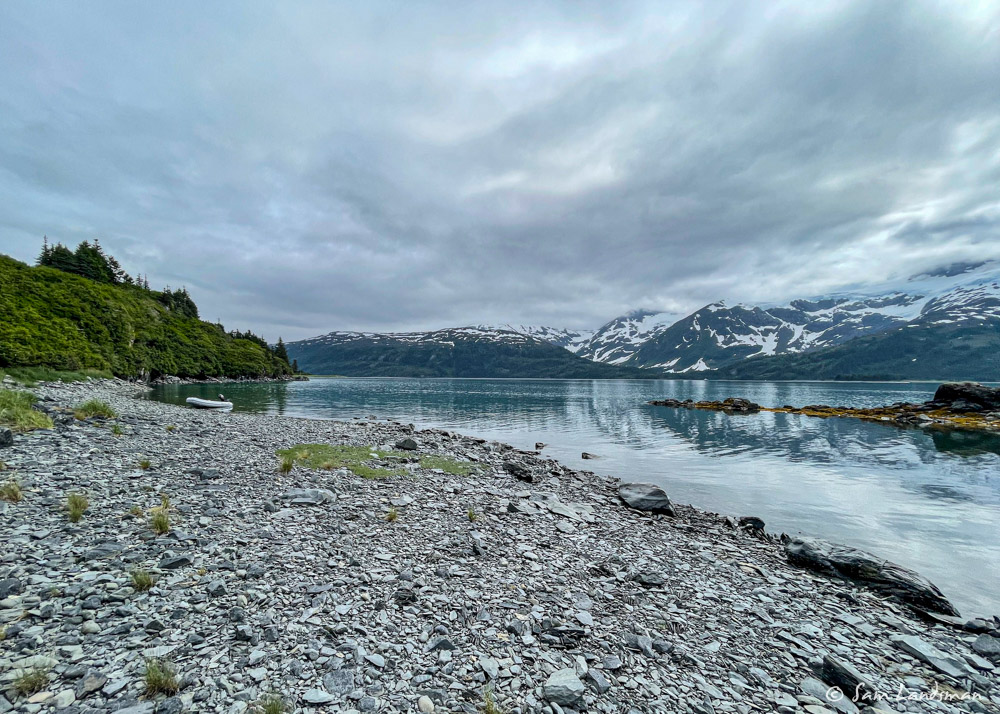 Our second attempt a few minutes later ended similarly. We didn’t try a third time, deciding that enjoying the upper deck seemed like a safer, more relaxing alternative for our last night with Josh and Erika onboard.

The next morning we made the two hour cruise to Whittier, where we sadly said goodbye to Erika and Josh (Thank you both for the awesome food and enthusiastic help bringing Akeeva across the Gulf!).

Whittier is a small town–just a few hundred residents, most of whom live in a single building. There’s no supermarket, few restaurants, and a couple of convenience-type stores. Unlike communities in Southeast Alaska, which are almost universally isolated from the road system, Whittier is just 60 (paved) road miles from Anchorage, where about 40% of Alaskans live. It’s a busy place, filled mostly with fast, trailerable, pilothouse boats. For cruisers like us who visit by water, Whittier offers little more than a place to pick-up or drop-off visitors. Moorage for larger boats is extremely limited, and although there was space when we arrived, we were told we couldn’t rely on overnight space being available (space for loading/unloading for an hour seems reliable) on future visits. This isn’t really much of a problem, since there are several good anchorages within a few hours of town.

Our route for the first few days in Prince William Sound:

Within a few days of being here, we knew it was worth the  adventure of crossing the Gulf. The density of spectacular anchorages, places that rival or exceed Cannery Cove, Red Bluff Bay, and Ford’s Terror, seems higher here than anywhere else I’ve cruised. There are also fewer cruising boats than most places I’ve been, although there are lots of small, fast, pilothouse cruising and fishing boats out for shorter trips. And the hiking! It’s wonderful.

Next up: Cordova, Columbia Glacier, Valdez, and a tsunami evacuation.