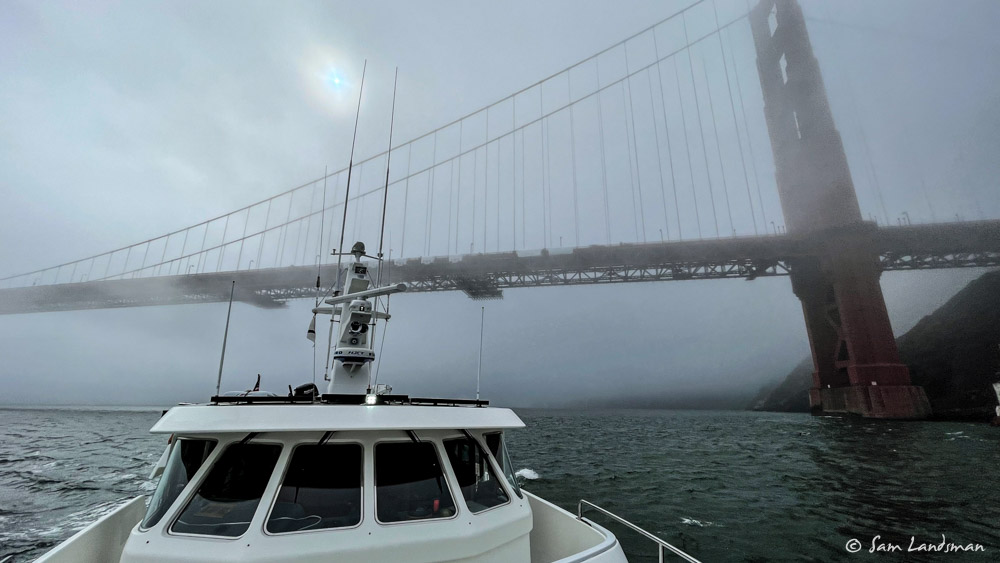 My last blog entry had us in Hoonah, AK, after returning to Southeast Alaska from Prince William Sound at the beginning of August. The next month was filled with guests, whales, bears, and rain in Alaska.

By the middle of August, the rain was getting to us and we were making concrete plans to head south to Mexico for the winter. We figured we’d be back in Washington around the middle of September. We could address any boat issues and continue south as soon as the weather cooperated.

The Washington and Oregon coasts are notoriously hostile. Safe harbors are few and far between. Getting in-and-out of a safe harbor can be impossible, too, since nearly all are guarded by river bars. These river bars are best transited at or near slack, before the ebb has begun, and when the swell is low. Unfortunately, by the time offshore conditions have deteriorated enough that cruisers want to be in port, the bars are often too rough to cross safely. The only option is to remain at sea. Before departing, I made a list of each safe harbor, including links to information and conditions about each bar crossing, so if conditions looked like they were deteriorating, we could easily seek shelter.

During our trip south through BC, I kept an eye on the 10-day weather forecasts. Anna decided long ago that the Washington and Oregon coasts weren’t her idea of pleasure boating, so I worked on several different itineraries for getting down the coast. Given lots of time, I figured I could singlehand. The longest legs are about 18 hours, and with careful planning and weather selection, it seemed doable. Or, if the weather cooperated and I could get a capable crew together, we could do the whole thing in a single, 780nm, four day run. Realistically, I thought, we’d likely end up somewhere in the middle, with a few overnights and some days sitting in harbors waiting for better weather. The challenge with the latter is crew schedules and transportation. If we get stuck in Brookings for a week, how does crew get home and new crew arrive?

As our departure window neared, the weather looked like it might just cooperate for a non-stop trip to San Francisco. Jake Bloom, who lives on San Juan Island and works on boats, said he could do five or six days as crew. With everything falling into place, we ended up spending two nights in Washington before heading south. Just enough time to pick up fresh groceries, top off fuel tanks, send Anna off, and pick Jake up.

When we left Friday Harbor, we had a little less than five days of good weather forecast. During that time it looked like we’d have a day of decent following seas and wind, and a few hours of headwind at the Oregon/California border, but otherwise calm conditions. If we were delayed and pushed into the fifth day, however, things would get ugly, with 35+ knot winds. No thanks!

The first few hours went great, but just after dark we ran into our first problem. Suddenly, the engine bogged down, our speed slowed by three knots, and a terrible vibration began emanating from the drivetrain. We’d hit something, but couldn’t tell what in the dark. We stopped, reversed, and went forward again a few times. Most of the vibration was gone. Most of our speed came back. Should we divert into Sequim and have a diver look under the boat? Doing so would effectively delay this trip for a week or more to wait for weather. We decided to press on. If things got worse, we could always divert later.

Thankfully, the rest of the first night remained uneventful. We rode the ebb out the Strait of Juan de Fuca, and sometime in the wee hours of the morning, made the big left turn down the coast.

The following days slipped by quickly, with only a few moments of drama. We found an easy rhythm of 6 hour watches, longer than most cruisers prefer, but they gave us plenty of time to get real sleep when off watch. We occupied ourselves with movies and podcasts and the occasional whale out the window.

The first excitement happened in the middle of the second night. We’d had 15-20 knots of wind behind us most of the day, which built a six foot following sea. Throughout the day, as we climbed the back side of a swell, the engine bogged down slightly. At first I thought it was due to increased load, but by 1:00 a.m. I knew something else was going on. Despite the Racor filter gauges showing green, I suspected clogged fuel filters. At 3:00 a.m. I ran the engine to wide open throttle for a few minutes. When I advanced the throttle, the engine died.

I fired up the wing engine and got us slowly moving in the right direction. Jake heard the commotion, woke up, and stayed on watch while I headed to the engine room. With no substantial vaccum showing on the Racors, I decided to swap the secondary on-engine fuel filter to see if that would help. This is usually a pretty easy task, but is made exponentially harder when working in a 100+ degree engine room at 3:00 a.m. on a boat with no stabilizers on the ocean (no stabilizers when running on the wing). Despite making a diesel fuel mess, I got the new filter on and bled in just a few minutes. We switched back to main engine power and were thrilled when the surging we’d experienced all day was gone. I spent the rest of the trip trying to get the smell of diesel off me!

By the time the sun rose on day three, the following seas and wind had died off. We enjoyed a few hours of calm before southerly wind built and we were bashing into head seas off the southern Oregon coast. The forecast had called for this—15 knots or so—but conditions onboard were a bit worse than we expected. The entire boat was covered in salt, the forward bunks were barely habitable (sorry Jake), and our speed over ground slowed. But, just as forecast, the winds died as we got south of Cape Blanco, and stayed calm all the way to San Francisco.

The number of sea lions we saw dramatically increased south of Oregon, too. We saw lots of groups like this: 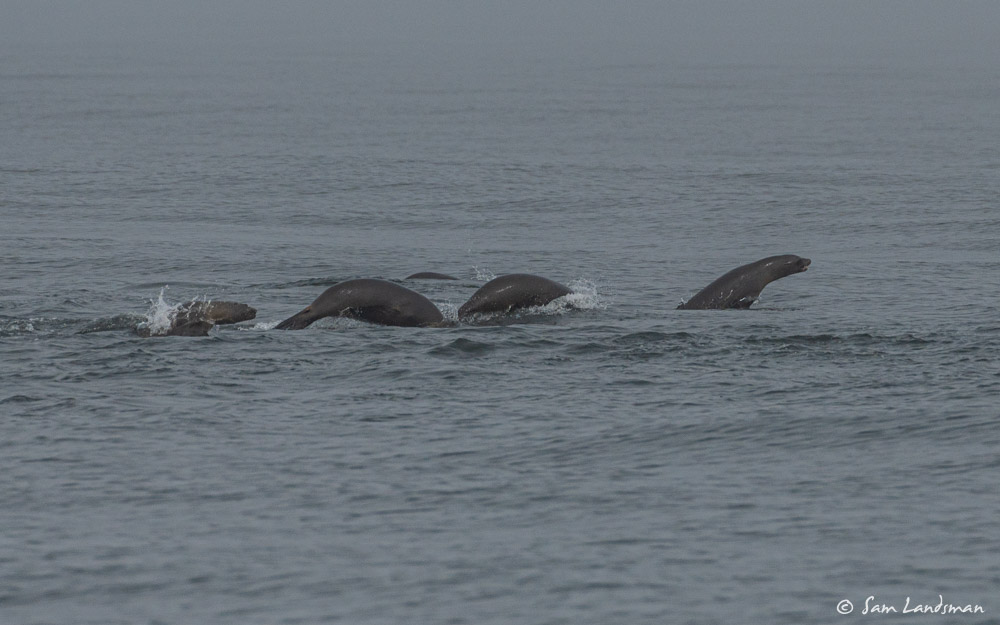 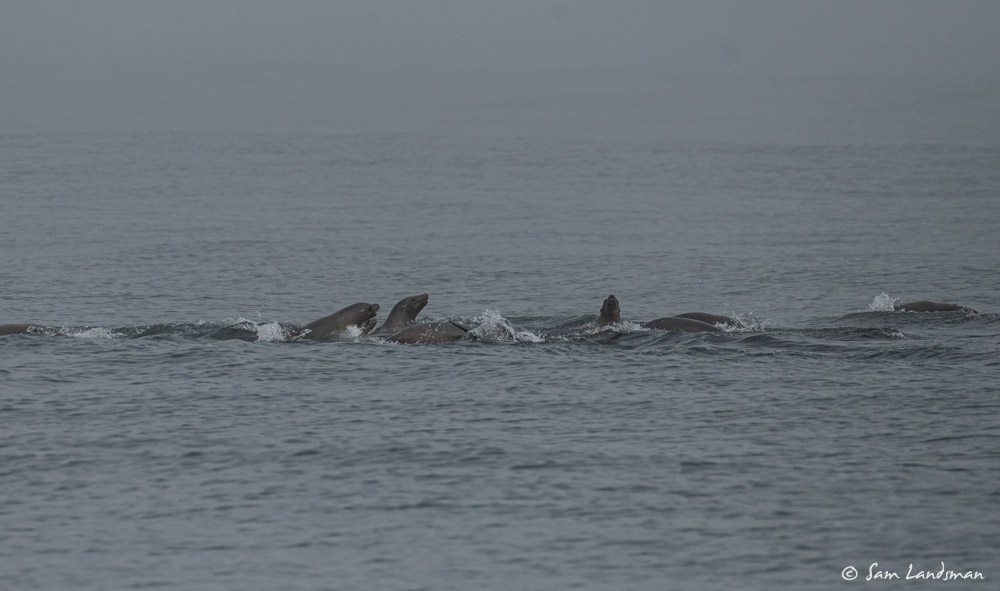 The second mechanical problem of the trip was the stabilizers, which centered themselves on night three and refused to be activated again. I puzzled over this, rebooting the system and inspecting the fluid conditioner and actuators, but found no problems. A few minutes later I remembered a switch on the transmission that centers the stabilizers if the boat is shifted into neutral or reverse. The switch was slightly out of adjustment, so the stabilizers thought the boat was in neutral. A length of duct tape to hold the switch in the correct position temporarily solved the problem.

As we neared San Francisco, fog formed, and it stayed with us until we reached the Golden Gate. Boat traffic also increased, and we spent a lot of time dodging radar targets.

At one point, a radar target appeared less than a mile away, moving towards us at 27 knots. I made a 90 degree course change and opened up our CPA to a few hundred yards, the best I could do, but the target kept on approaching. Finally, nervously, it came into view: pelicans. I turned us back towards San Francisco and breathed a sigh of relief. 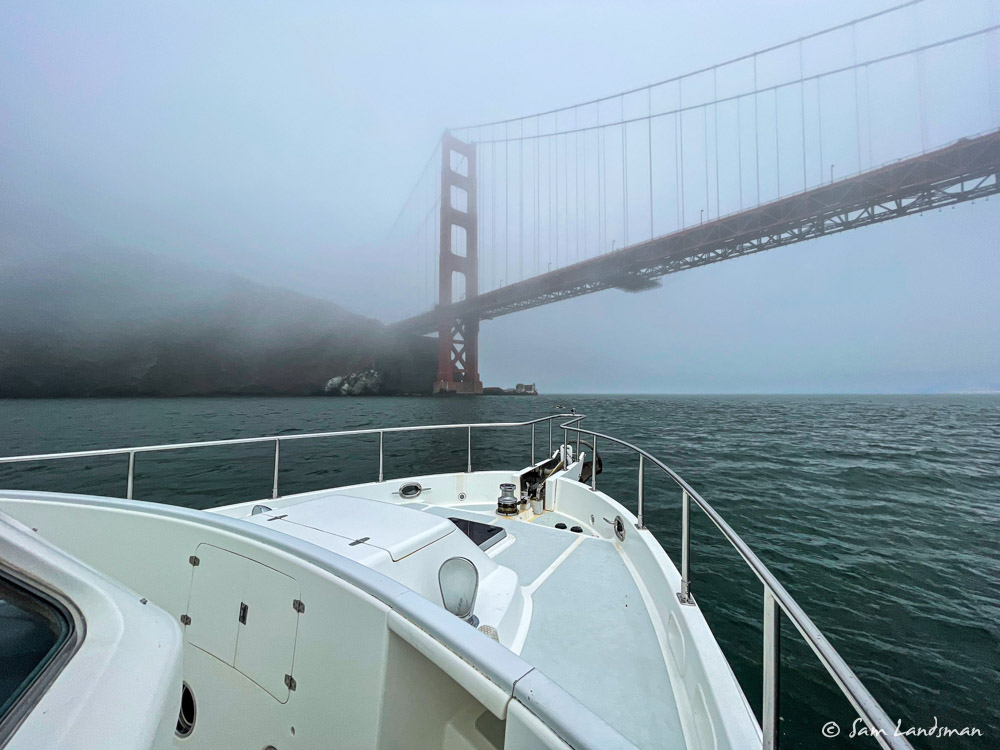 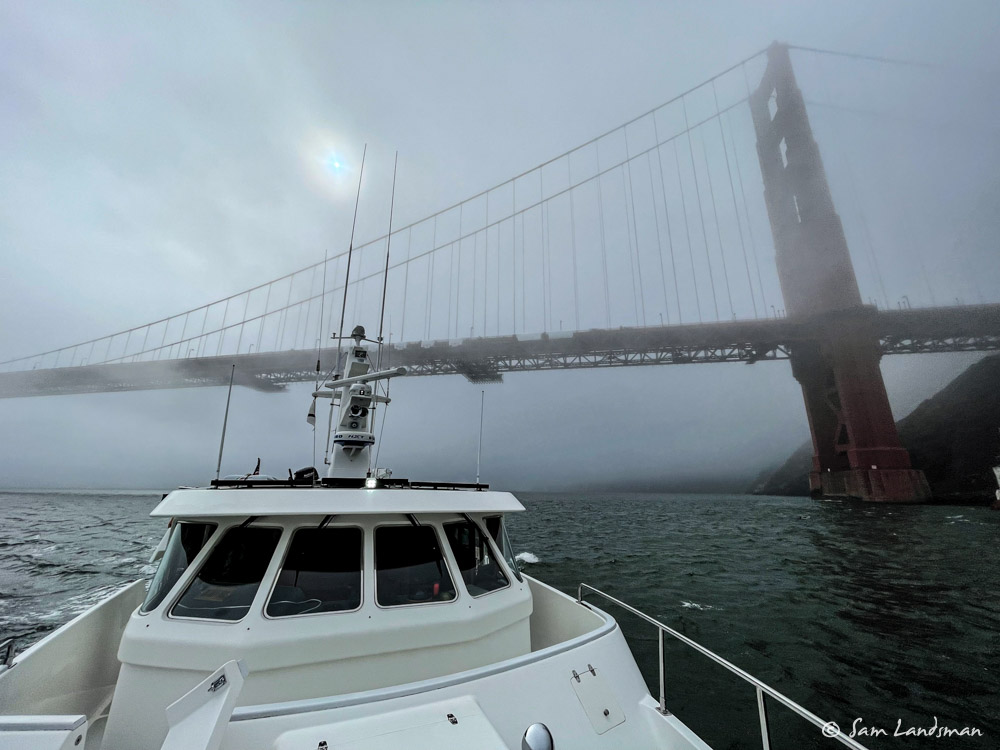 Motoring under the Golden Gate was a high point, even in the fog. This was the longest non-stop, offshore trip Jake or I had ever done, and the first time either of us had done this section of coast. Completing the trip safely, quickly, and with few surprises felt like an accomplishment. The total distance was 782.8nm in almost exactly 95 hours, for an average speed just over 8.2 knots.

When we arrived in San Francisco, we had plans to explore the area by boat, but real life intervened. We had weddings to attend in New York City and Orcas Island and family and friends to catch up with. We rented a slip at Marina Bay Yacht Harbor in Richmond for the month of October. This was a great spot, with reasonable moorage rates, a great view of the city, and easy access to a ferry to the San Francisco waterfront.  Safety concerns in Richmond proved to be a non-issue—the marina is surrounded by new housing developments and a large park that felt safe at all hours. October flew by and we never even left the dock.