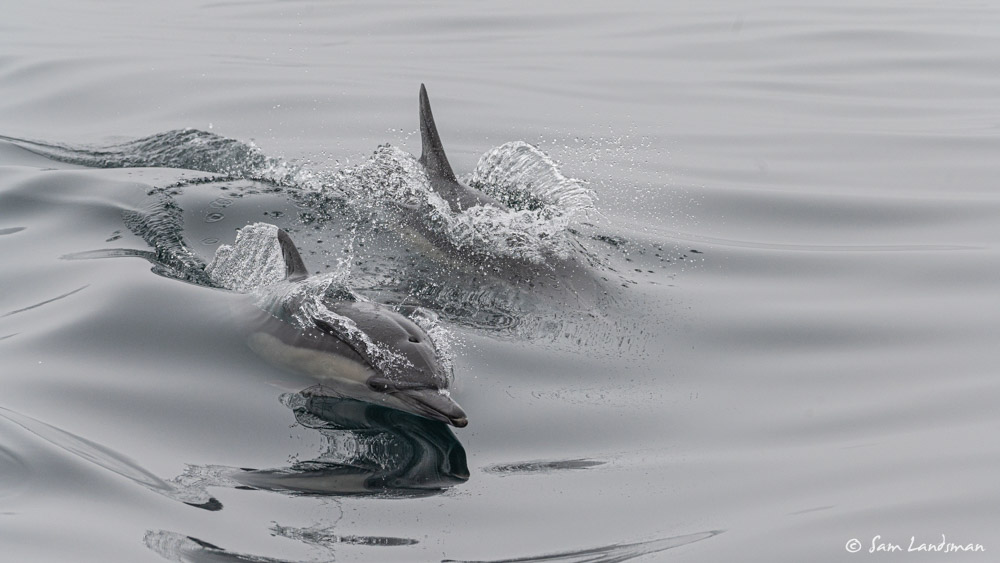 October in San Francisco flew by. Before we knew it Halloween, our appointed departure date, was upon us. We planned to harbor hop down the coast, first stopping at Monterey Bay for a few days, then Morro Bay, then around Point Conception and into Santa Barbara. Getting down the coast this way is a mostly daylight affair, and we were particularly looking forward to visiting the Monterey Bay Aquarium.

As we looked at the weather before departing San Francisco, though, we saw a near-perfect weather window for a non-stop, 36 hour trip directly to Santa Barbara. Anna and I had never done an overnight with just the two of us aboard, but this seemed like the perfect opportunity. The weather was supposed to be good and there were several harbors to bail-out to if weather, mechanical, or crew needs changed.

If possible, I prefer to arrive and depart in daylight. The most hazardous part of most voyages is the beginning and the end, when negotiating marinas, anchorages, or other crowded, shallow areas. If we left San Francisco after sunrise, we’d arrive in Santa Barbara around sunset, a day later, and any delays or adverse current would push our arrival into the dark. Since I was already familiar with San Francisco and had never been to Santa Barbara, I figured it was preferable to leave San Francisco in the predawn darkness to ensure plenty of daylight for our arrival in Santa Barbara.

The first hour across San Francisco Bay was easy, but as we approached the Golden Gate in the dark, traffic increased, seas built, and a four knot flood was running against us. As we passed under the Golden Gate and into the Pacific, we felt like we were in a washing machine, as the confused seas tossed us around, the current spun us this way and that, and I worked the helm to avoid sailboats and an overtaking container ship.  It was a few of the busier moments at the helm in recent memory!

Soon, though, the swell settled into a discernible pattern and the sun came up. The day passed easily and we made good time south. Dolphins and porpoises have become more regular visitors as we’ve headed south, and the “pffffft” of a dolphin taking a breath next to the boat is one of the simple joys while underway. Whales, too, are frequent sights. Often we’ll see a huge, mysterious splash in the distance, the fleeting remnants of a breach nobody saw. 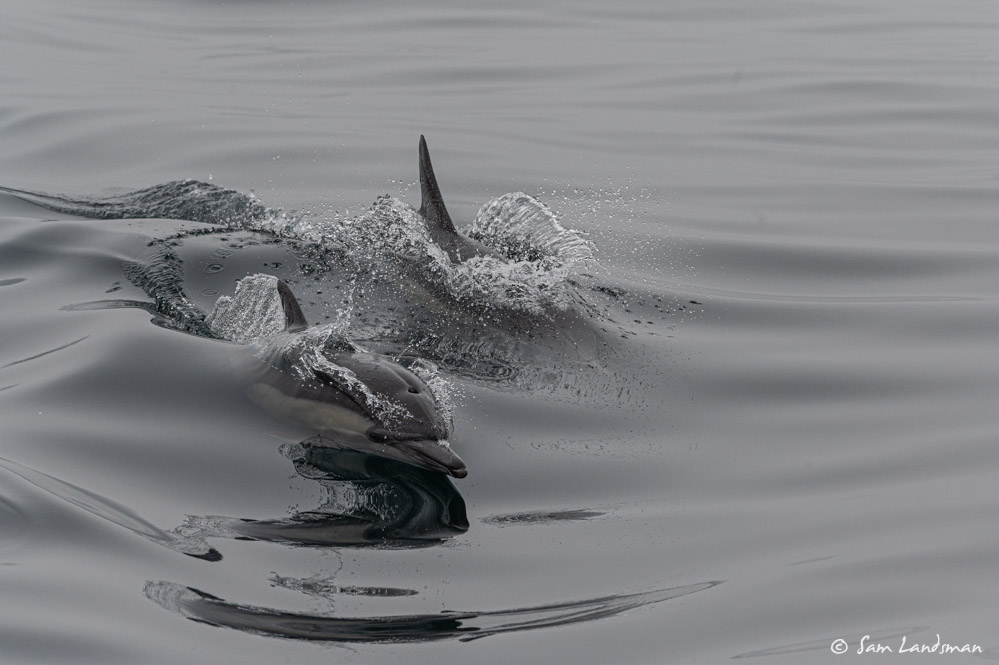 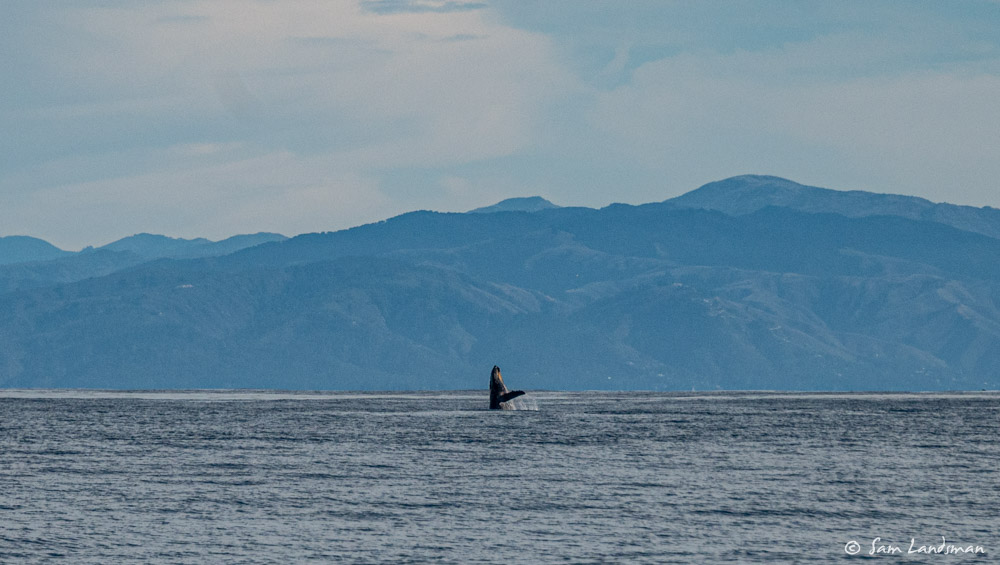 Just as the forecast predicted, the wind and seas remained calm, even around notorious Point Conception.

South of Point Conception the oil rigs came into view, huge skeletal structures set into the sea floor miles offshore. Many of these have been decommissioned, but natural oil seeps continue to flow into the ocean. We were shocked to motor through huge slicks of oil, and even more surprised to smell it, miles from shore or any other boats.

We arrived in Santa Barbara a few hours before sunset and settled into Santa Barbara Yacht Club’s guest slip. We weren’t in the PNW anymore! Huge sandy beaches stretch from each end of the marina; palm trees line the shores. We walked barefoot on the beach and sat in the sand, feeling like it was summer despite the calendar.

Santa Barbara was delightful. We enjoyed good meals out, museums, walking, biking, and got our COVID booster shots! Actually, the booster knocked both of us out for a few days, but the last thing we want is COVID in Mexico, so we’re grateful for the protection.

After a few days in Santa Barbara, we continued to Ventura, a few hours away. The weather was uncharacteristically foggy, and midway through our cruise, the main navigation PC died. Actually, the exorbitantly priced, custom-made marine display died. Akeeva has fully redundant electronics, so we weren’t in any danger, but we’d need to address this before leaving for Mexico.

Our two days in Ventura followed our COVID booster shots. Between the foggy weather and the side effects from the vaccine, we had a quiet few days recovering before moving on to Marina del Rey.

The foggy (smoggy?) weather persisted through our stay at Marina del Rey, but we still enjoyed our visit. Marina del Rey is unlike any marina I’ve been to before. It’s absolutely huge, encompassing many marinas and yacht clubs. It’s so busy they have a traffic control scheme to keep things somewhat sane. Vessels range from rafts to mega yachts, and they tend to be a little flashier than what we’re used to in the Pacific Northwest.

One of the most fun parts of the trip down the California coast has been catching up with old friends. At nearly every port, we’ve known someone nearby–a childhood friend, former coworker, boat friend, etc. COVID has kept us all apart for the last few years, but something about being on a boat nearby for a few nights motivates reunions.

We’ve been carrying electric bikes aboard for over a year now. In Alaska, they got occasional use, but here in California, they’re used almost daily. Marina del Rey had the best biking yet; we enjoyed miles of relaxed beachfront riding.

Since leaving British Columbia in September, we’ve been either underway or at marinas every night. This is unusual for us. We prefer being at anchor. As we’ve come down the coast, though, anchorages present a few problems. First, they’re often exposed and rolly, so they’re not that comfortable. Second, they’re isolated. When we’re cruising in BC and Alaska, the scenery, wildlife, and isolation are why we’re there. But in Southern California, we’re finding, the draw is the communities themselves. We like being tourists as we pass through, and that’s harder to do when anchored out.

But, after so much time at marinas, we were ready for some time on the hook. Catalina Island beckoned.

Catalina is an interesting place, the defining cruising destination for Southern California boaters. I didn’t know what to expect, other than everyone seemed to rave about the place. It looked at once crazy crowded and strikingly beautiful.

Catalina has no docks for cruising boats, but it does have an extensive system of moorings. These moorings–unlike anything we’ve used before, with a bow and stern line and lots of ways to entangle a boat–are made available through an online reservation system that I don’t understand. Despite the mystery, we managed a reservation for a few nights at Catalina Harbor and hoped for the best.

The reservation system made Catalina Harbor sound overwhelmingly busy, so we were relieved to arrive and find it nearly empty. We’d watched some YouTube videos about grabbing a Catalina mooring before visiting, and they were invaluable. We also felt fortunate that for our first attempt we had no neighbors to hit or witnesses to amp up the pressure. Other than making a mess of the side of the boat with the sand line (it’s gross!), securing to the mooring was actually easier than expected.

Our days in Catalina Harbor were filled with activity: dinghying around the harbor, hiking onshore (endless hiking), relaxing at Two Harbors. We instantly understood the appeal of Catalina. It’s an oasis of rugged natural beauty just a few hours from the insanity of Southern California.

Avalon, the largest town on Catalina and home to the famous casino building, came with mixed reviews from cruiser friends. Many said it’s too crowded, too touristy, too loud. In November, we found it quiet, half-empty, and quite enjoyable, if a little rolly. Our three days there passed quickly, filled with walking around town, visiting museums and the botanical gardens, and sampling local restaurants. The weather was so pleasant that I briefly toyed with staying here all winter, but a swim in the 60-something degree water convinced us that Mexico still has merits.

We could have spent a month at Catalina exploring different harbors and hiking around. Really, we could have spent months more in Southern California, even an entire winter. We skipped the Channel Islands entirely (swell was too big for comfortable anchoring), never visited the Nordhavn office in Dana Point (they have a bar and a room full of swag!), and missed friends in various ports. But, we’ll be passing through again in the spring and we may get a chance to see what we missed.

The last stop on the US west coast is San Diego, kind of like Anacortes and Bellingham is for cruisers heading to Canada. Marine services are plentiful and it’s a good place make final preparations before heading down Baja. We had a growing list of boat tasks: fill diesel, propane, and dinghy gas (first fuel since Anacortes), replace the failed navigation PC display, adjust main engine valves (thank you Bob Senter for your outstanding in-person tutorial!), have the air conditioning units serviced, and on and on. Roberta and John, former Alaska and West Coast Vancouver Island flotilla participants, live in San Diego, and they kindly leant us a car to help with the chores, which made life wayyyyy easier. Thank you so much!

A final comment: San Diego is a very convenient place to leave the boat and fly somewhere. We often hear people say they can’t take the big cruise they dream about because some event requires in person attendance. Our lives are no different; we had weddings to attend in September and October and a funeral in November, all far from the boat. Leaving the boat for a few days is no big deal. We’ve done it in Ketchikan, San Francisco, and San Diego in the last several months, and in each case we’ve returned to the boat with renewed excitement for our journey.