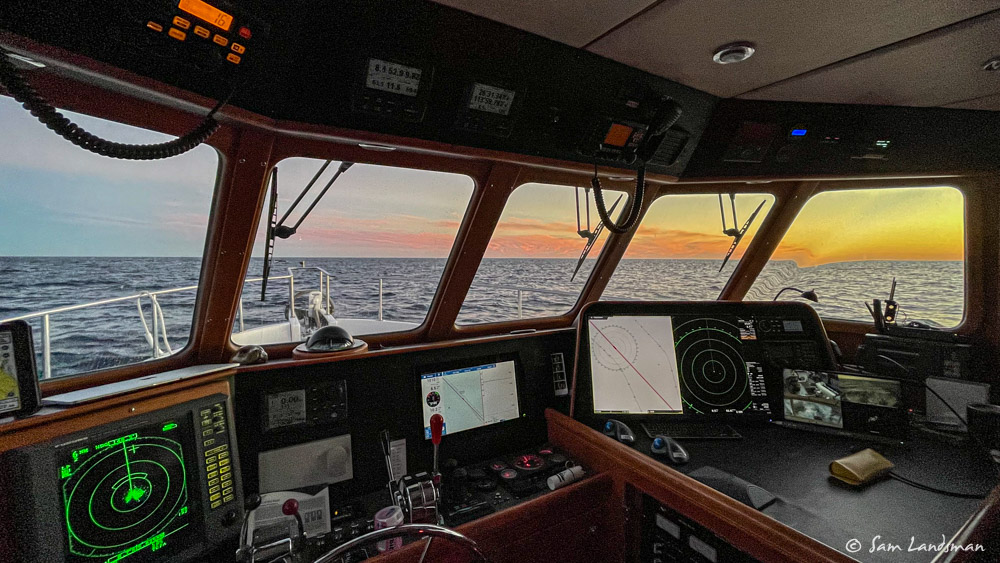 Arriving in Mexico was very different than arriving in Canada or the United States. We chose to clear into Mexico in Ensenada, the northernmost port of call. Ensenada is about 60nm from San Diego, and we arrived at Marina Coral late in the afternoon. A health inspector came to the boat, took our temperatures, checked our vaccination card, and then allowed us to check in with the marina office.

At the marina office, we paid for a couple of nights (the most expensive moorage we’ve ever had at $3.75 per foot) and we asked about clearing customs. Since it was after 2:00 p.m., the government offices were closed. In the US or Canada, we’d be stuck on the boat until the agents came and checked us in. In Mexico, they gave us a coupon for free welcome drinks, invited us to explore town, and pointed us in the direction of a supermarket to do our grocery shopping before any of the entry formalities were complete.

One of the reasons we stayed at Marina Coral is they make the customs process easy. First thing the next morning, we met an agent who, for $100, drove us into town and took care of all our paperwork. The visit took a couple hours, during which we had very little idea what was going on. I just signed when asked, swiped my credit card when needed, and soon enough we had our temporary import permit (TIP) and visas and were on our way. No questions about produce, weapons, currency, or the usual things that we are asked about when crossing the US/Canada border.

Marina Coral is a nice spot, with swimming pools, restaurants, and a good grocery store right across the highway (getting to the grocery store requires playing frogger). But it’s expensive and far from town, so after a couple of nights we moved to Cruiseport Marina, which is right in town, a little less expensive, but lacks the pools. The real benefit of moving to Cruiseport was Thanksgiving with new boat friends on SV Hoptoad, who we’d met in San Diego. They hosted us and another Seattle-based sailboat for a wonderful American Thanksgiving in Ensenada. We were by far the least experienced cruisers in attendance–one couple had circumnavigated and the other had sailed to New Zealand (and the husband back from New Zealand, solo, nonstop). What a fun evening! 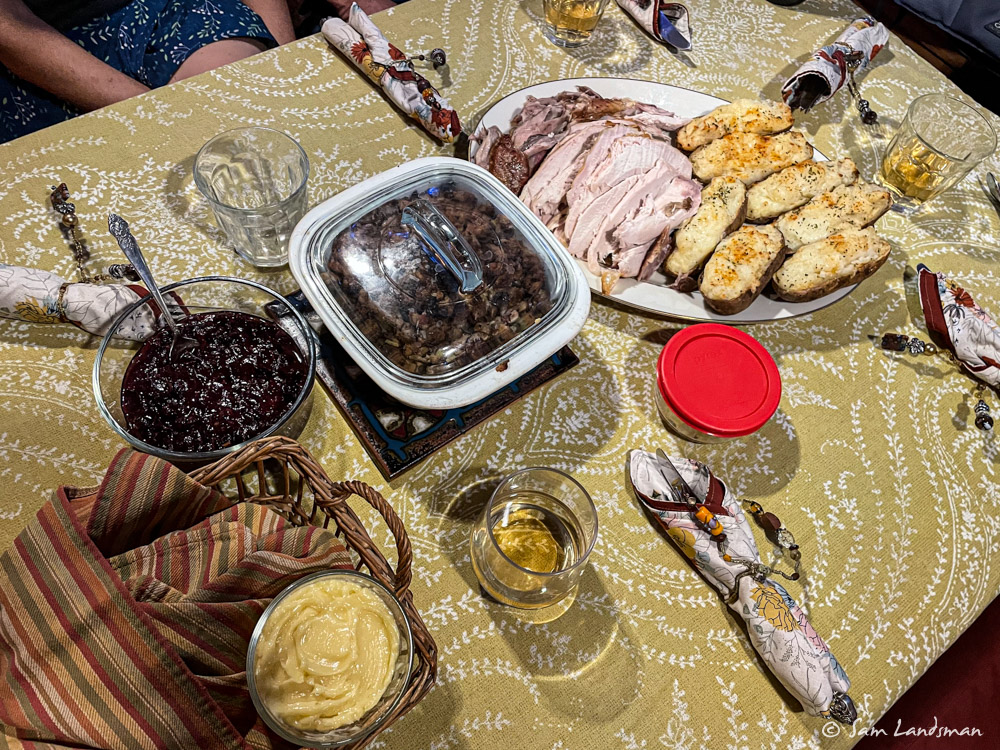 The morning after Thanksgiving we set off for points south. The run down Baja is about 700nm, roughly the same distance as the Inside Passage between Washington and Alaska. But that’s where the similarities end. On the Inside Passage, you’re rarely in the ocean, fuel and water are available every 80nm or so, and there are countless anchorages, towns, and marinas to stop at. It’s possible to go from Seattle to Alaska and tie up to a dock every night, especially with a faster boat. 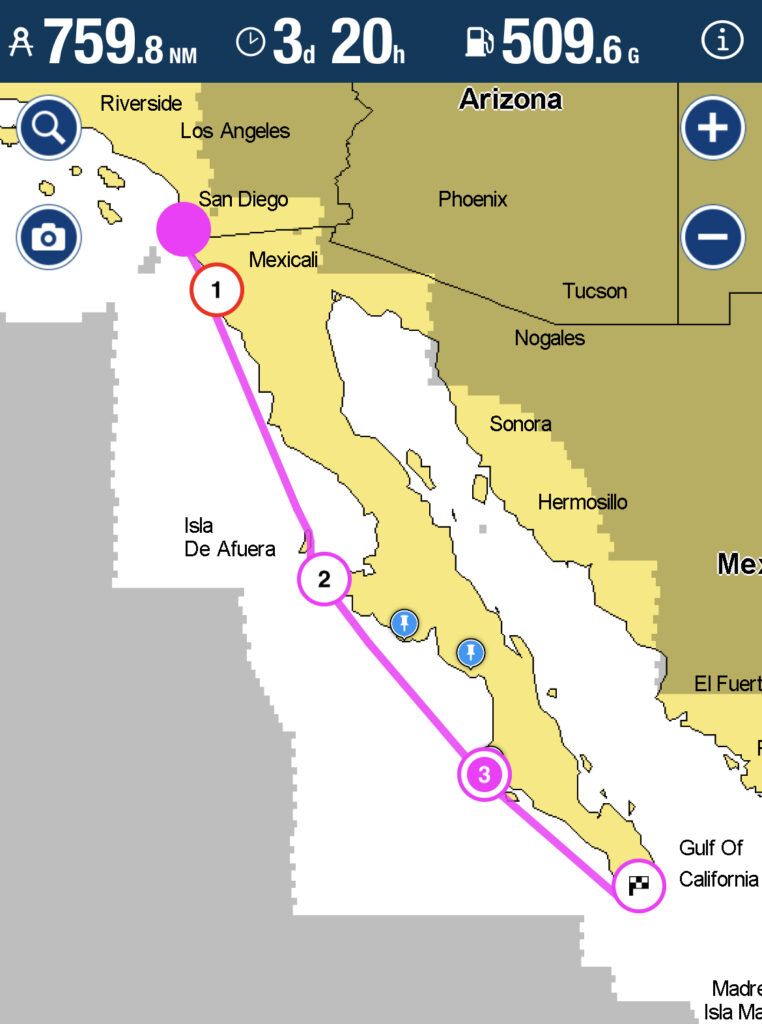 The outside of Baja, by contrast, is all ocean. There’s not a single marina and fuel is only available in a couple of places (and even then it’s double normal price and delivered in drums on a panga). There’s nowhere to haulout, fill water tanks, or get professional boat help. There’s not even an easy or fast way to get parts or crew if something happens. It’s possible to avoid most overnight running by stopping at roadsteads along the way, but they’re exposed to swell and most aren’t particularly secure.

We planned to make the trip down fairly quickly, with just two stops: Turtle Bay and Santa Maria. The forecast when we left was excellent, with mostly light winds and a lazy 3-4 foot swell for the 232nm, 30 hour trip from Ensenada to Turtle Bay.

The 30 hours down to Turtle Bay passed easily and without drama. This was our second overnight with just Anna and me aboard, this time along a much less hospitable coastline than before. It’s fun to watch Anna get more comfortable with standing watch, operating the boat, and being all-by-ourselves on a very big ocean.

Turtle Bay is a welcome anchorage after several hundred miles at sea. It’s relatively well protected, although still rolly by PNW standards. The bay itself is alive with wildlife. Squadrons of pelicans bomb into the water everywhere. Sea lions snort and bark. Schools of fish swarm around the boat.

The town itself is considerably less alive than the bay. “Dusty” is the first word that comes to mind when I think about Turtle Bay. A few locals wait on the beach to help dinghies land and keep watch over them, hoping to get propinas (tips) from yachties. We walked all over town, found a few tiendas (small convenience-type stores) and a single operating restaurant, where we got breakfast.

After a couple of nights in Turtle Bay we were well rested and ready to move on. This leg, to Santa Maria, is just under 200nm (24 hours). Once again, the weather forecast was perfect.

Along the way we enjoyed the most intense dolphin show yet. The picture below doesn’t do it justice, but all those ripples are from dolphins. Hundreds of them raced towards us, swam underneath, and then followed us for a few miles. 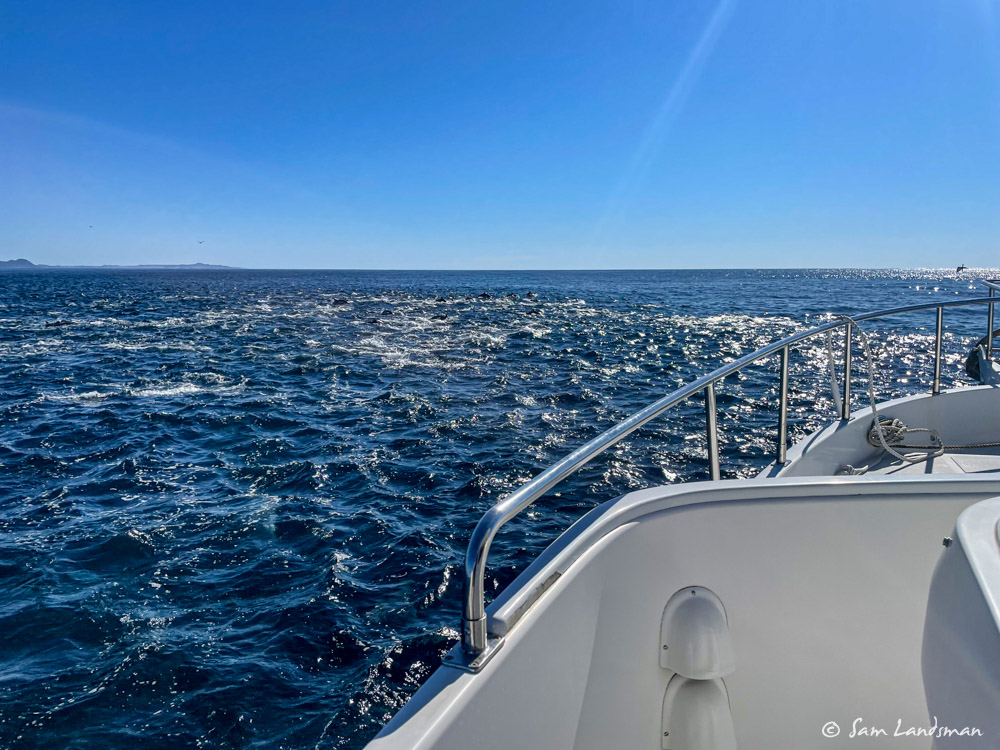 We also saw lots of sea lions. Some of them are particularly acrobatic: 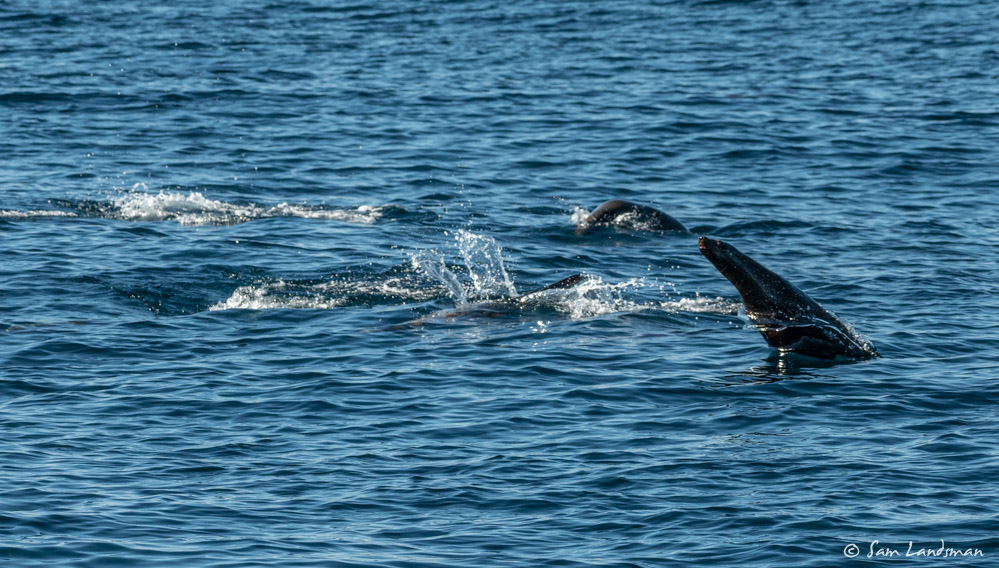 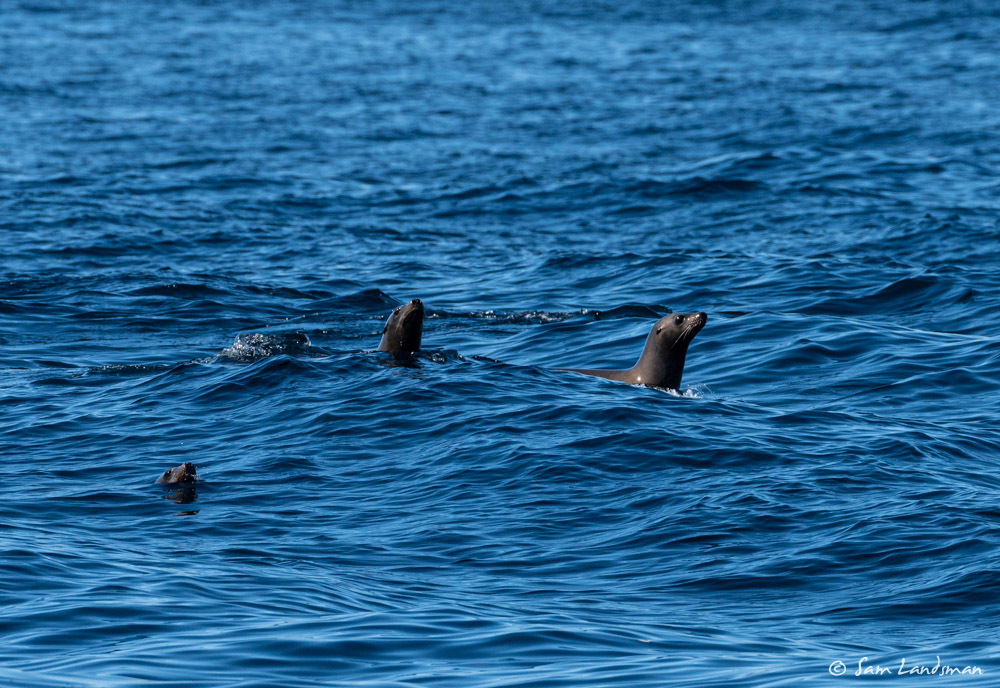 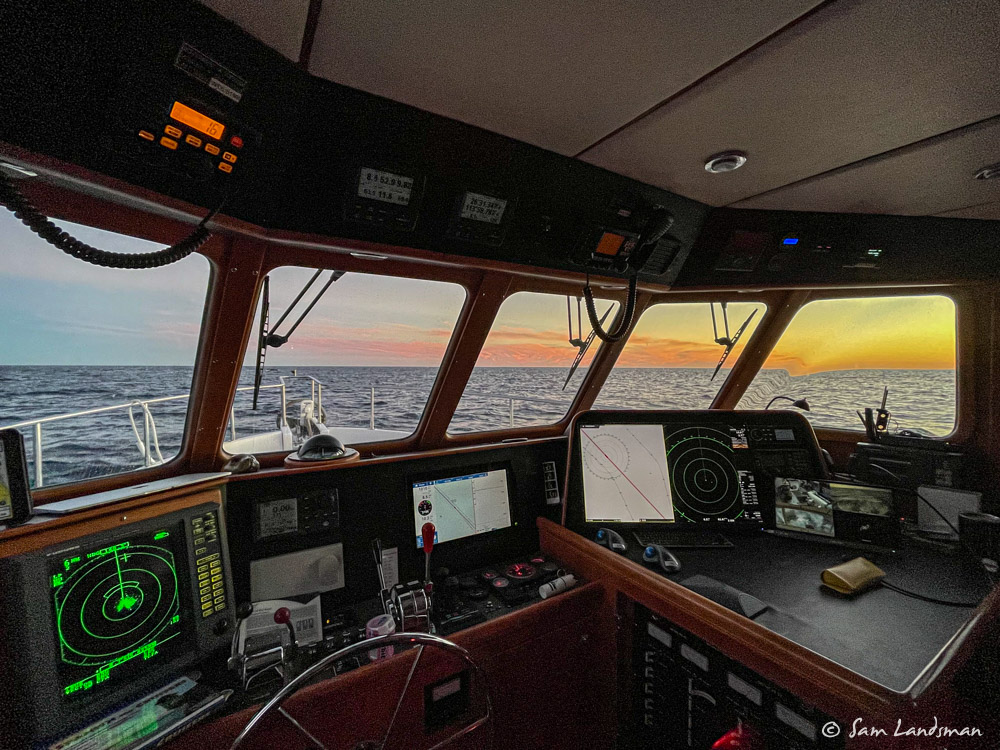 The radar indicated much more traffic on the trip from Turtle Bay to Santa Maria than we’d seen previously. During the day we passed half-a-dozen fishing boats like the one below. 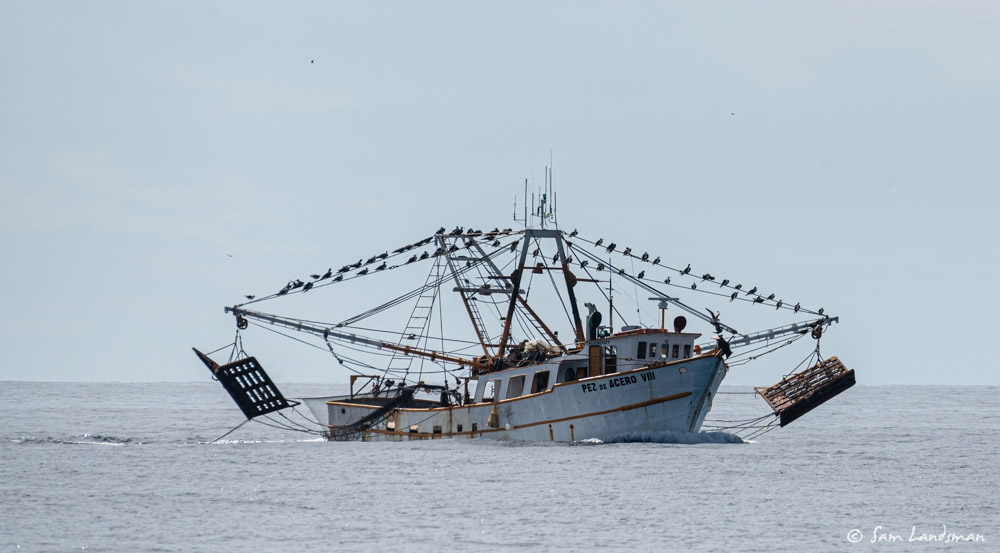 None of the fishboats have AIS, but they’re a great radar target. Speaking of radar, it’s by far the most useful navigation tool down here. Akeeva has an old 12kw, 6-foot open array radar and a new NXT dome radar, both Furuno. With a little tuning, the open array will pick up a panga in the swells at about four times the distance of the NXT dome, a great comfort when cruising on a dark night.

On previous trips I’ve stayed in Santa Maria and Magdalena Bay, but this time we just went to Santa Maria. I think it’s the prettier spot, the cell phone service is better, and it saves a couple hours of motoring, but it’s not as well protected.

Santa Maria was a highlight. We watched whales breaching from the boat, swam in 75 degree water, bought lobster from. a father and son in a panga, and had sailing friends over for dinner, but we took remarkably few photos. 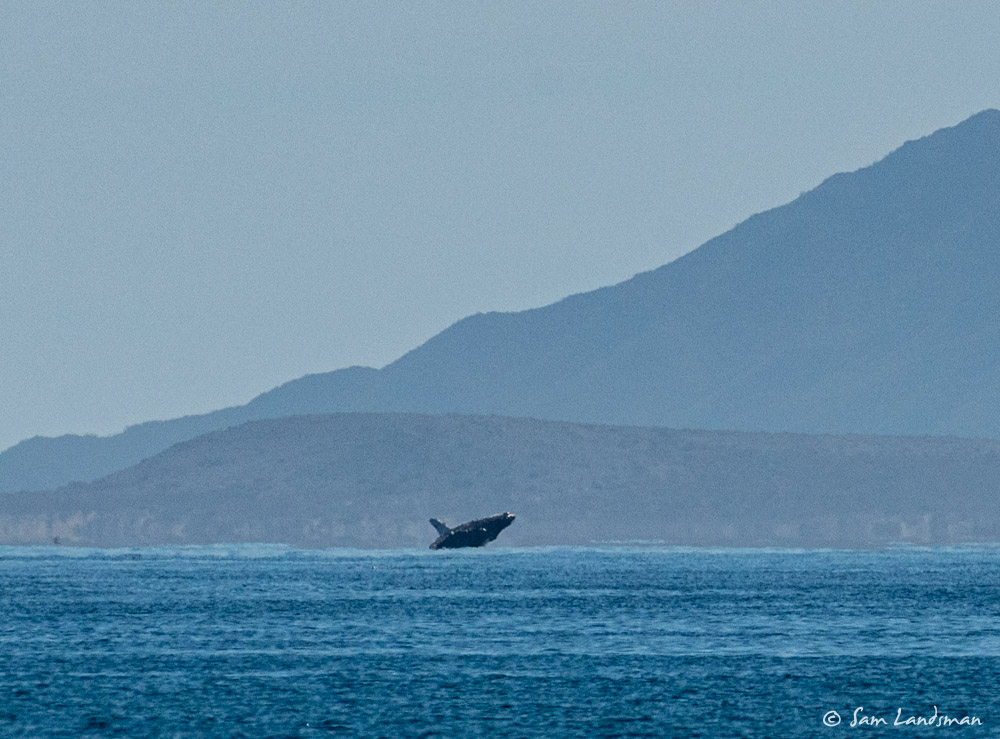 We did our first good deed, too. The fishermen who supplied us lobster asked if he could fill some water containers. Since we have a large watermaker, we happily obliged. While they filled their 55-gallon drum, we chatted as best we could in broken Spanish and English. Normally, they have to make a multi-hour drive at low tide to a town 20-odd miles away, fill the water, and drive back. We were glad we could save them the hassle of the rive.

After three restful nights in Santa Maria we continued to Puerto Los Cabos, in San Jose del Cabo. Along the way we saw our first jumping rays! 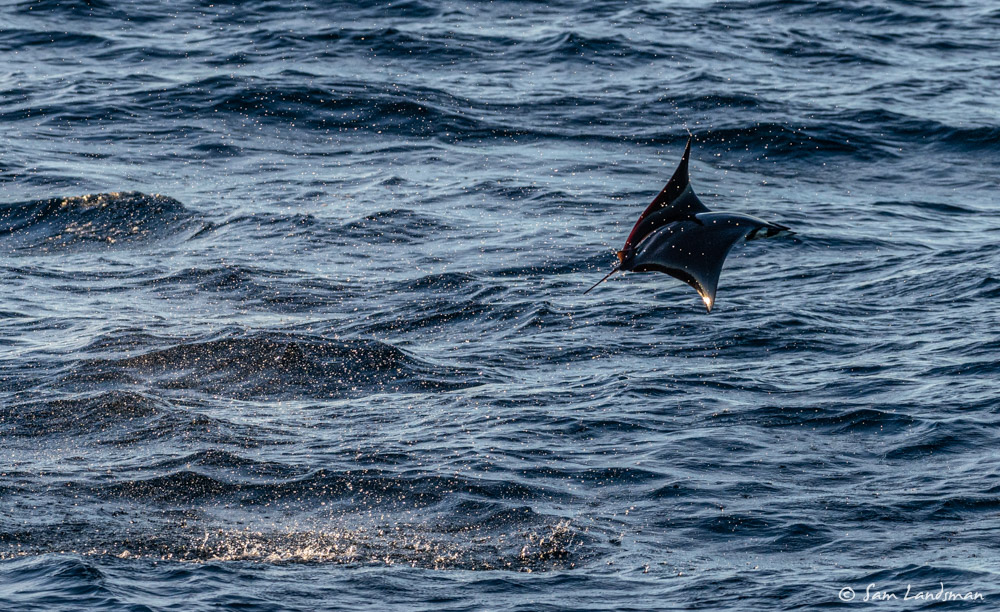 The forecast for the last leg into Cabo was worse than the previous legs. We expected 10-25 knots of northwesterly wind. Thankfully, we were traveling with the wind, and the stabilizers take out most of the roll when we’re traveling downwind. Traveling north would have been considerably less comfortable.

The weather on this last leg felt considerably warmer than what we’d experienced before, and for the first time, we fired up the generator and air conditioning overnight. In the Pacific Northwest, even when the air temperatures are high, the ocean stays cool. Below deck spaces, largely surrounded by sea water, naturally stay fairly cool. But here, with water and air temperatures both around 80, the boat gets hot. At anchor there’s usually a breeze and hatches and port lights provide some natural ventilation, but underway, with everything sealed up, the boat gets hot and stuff quickly. Sleeping in a hot, stuffy, humid, rolling cabin isn’t comfortable or restful, so on goes the air con.

Cabo was culture shock! We skipped Cabo San Lucas entirely, not keen on clubbing our way through Mexico, and found a slip in Marina Puerto Los Cabos, in San Jose del Cabo. Coming down the Baja we were usually one of the bigger boats and only powerboats. At Marina Puerto Los Cabos, we were comparatively small, old, and slow. The neighbors were almost universally large, high-dollar sport fishing yachts, complete with crew and we felt a little out of place.

San Jose del Cabo itself was charming, with a colonial downtown, a nice farmers market, and excellent (if pricey) restaurants. A tortilleria that I stumbled upon near the marina also had the best tortillas we’ve ever tasted.

After five nights in San Jose del Cabo, we were ready to move on. Our plan is to cross the Sea of Cortez to Pacific Mexico. We’ll head south to Banderas Bay and Barra de Navidad, following the warmer water and avoiding northerly winds that predominate in the winter in the Sea of Cortez. In a few months, we’ll cross back over to the Baja side and spend some time exploring the Sea of Cortez between La Paz and Loreto.