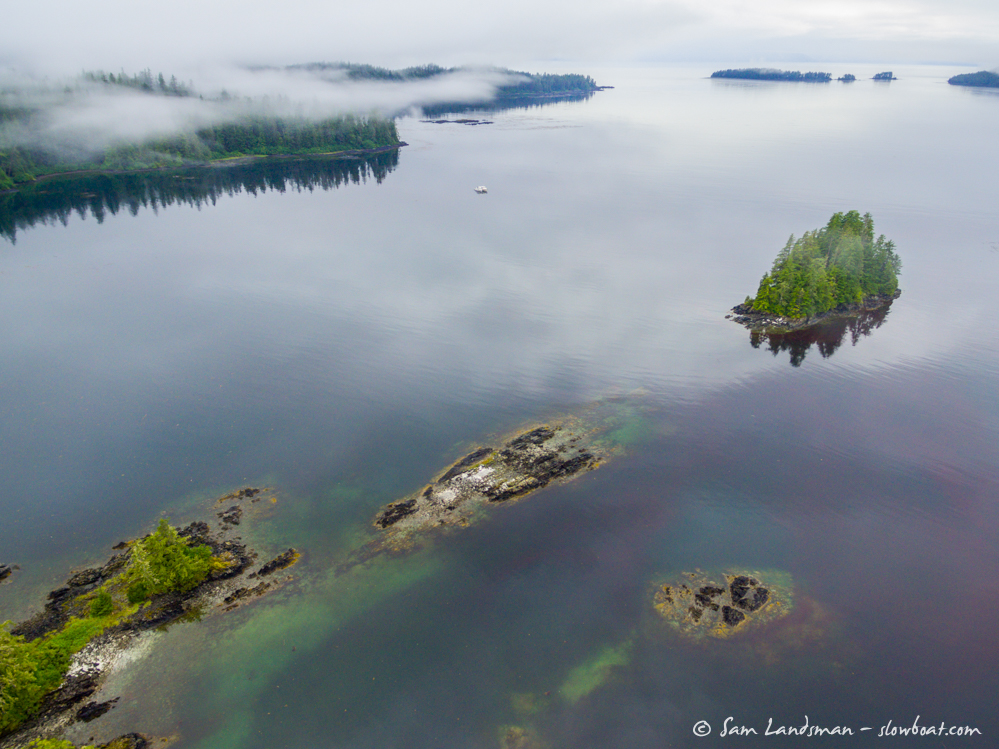 We left Kake mid-day, since Halleck Harbor (in Saginaw Bay) was just 15 miles or so around the corner and we had to wait for the fuel dock…or, the fuel truck. Kake used to have a small fuel dock, but last winter the dock blew away during a storm that brought 80-knot winds for several days, then 70-knot winds from the opposite direction. For now, they’re delivering fuel to a town dock by truck, but they can’t deliver on minus tides, so we had to wait until early afternoon when the tide had risen.

Two years ago a friend in Ketchikan told us about a pictograph in Halleck Harbor that we thought we’d try to find. While getting fuel in Kake, a local asked where we were headed, and then told us about the same pictograph. He said we’d find it on the white cliffs outside the bay, near the sea caves.

Once anchored in Halleck Harbor, we took the dinghies out to the cliffs and found the pictograph immediately. It’s quite large, and high on the cliff. Locals say there are burial caves here, near the sun. 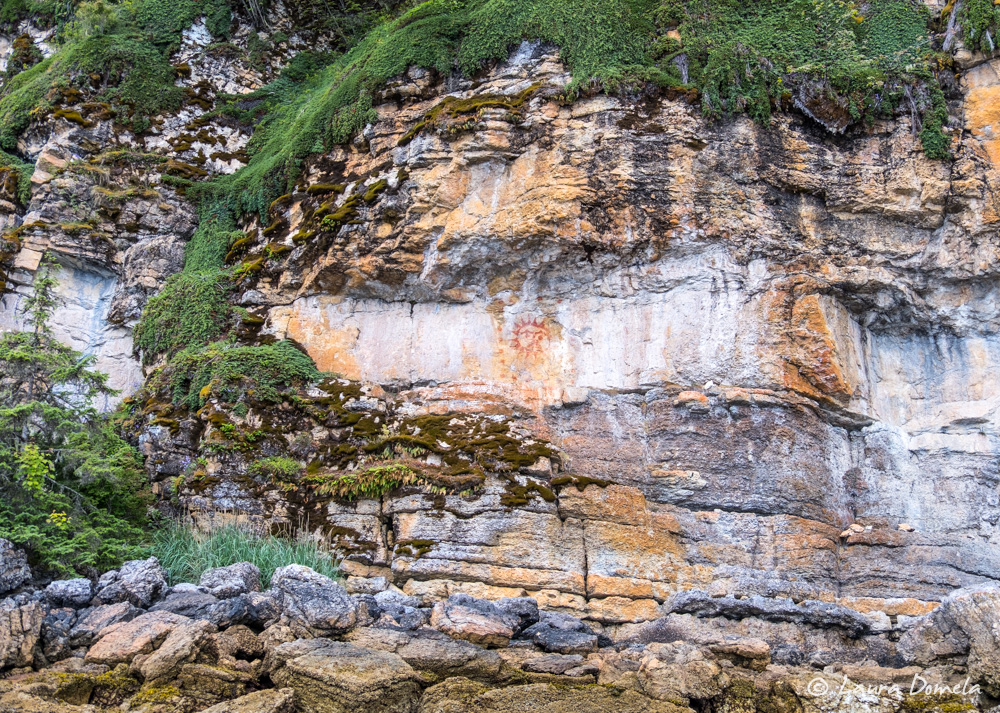 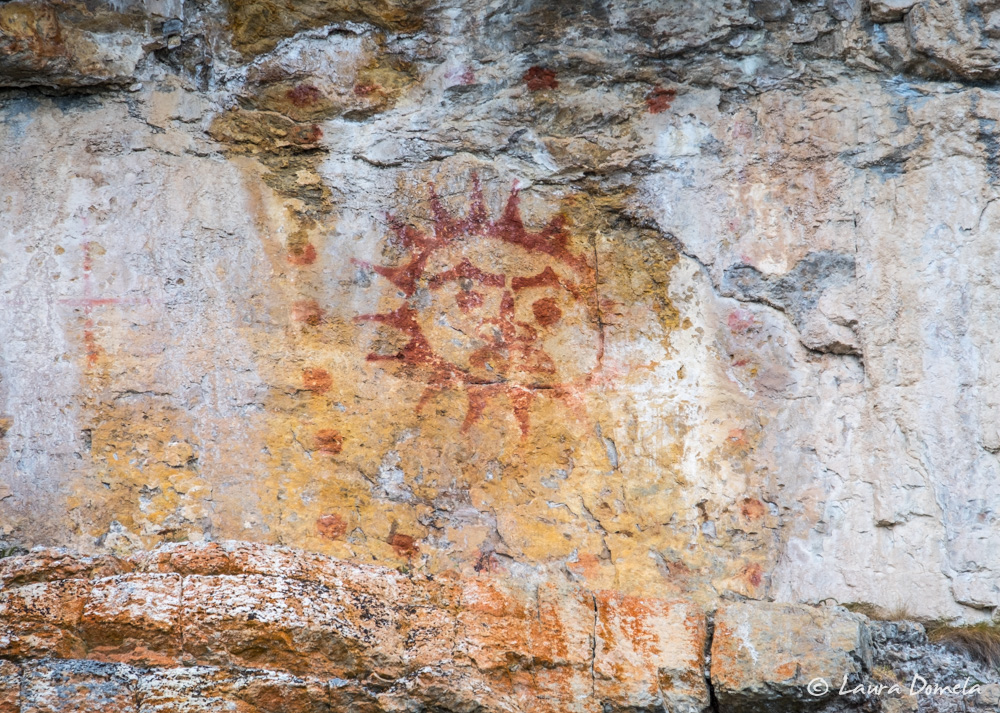 So many sea caves along these cliffs — some of them are big enough to drive a dinghy into. 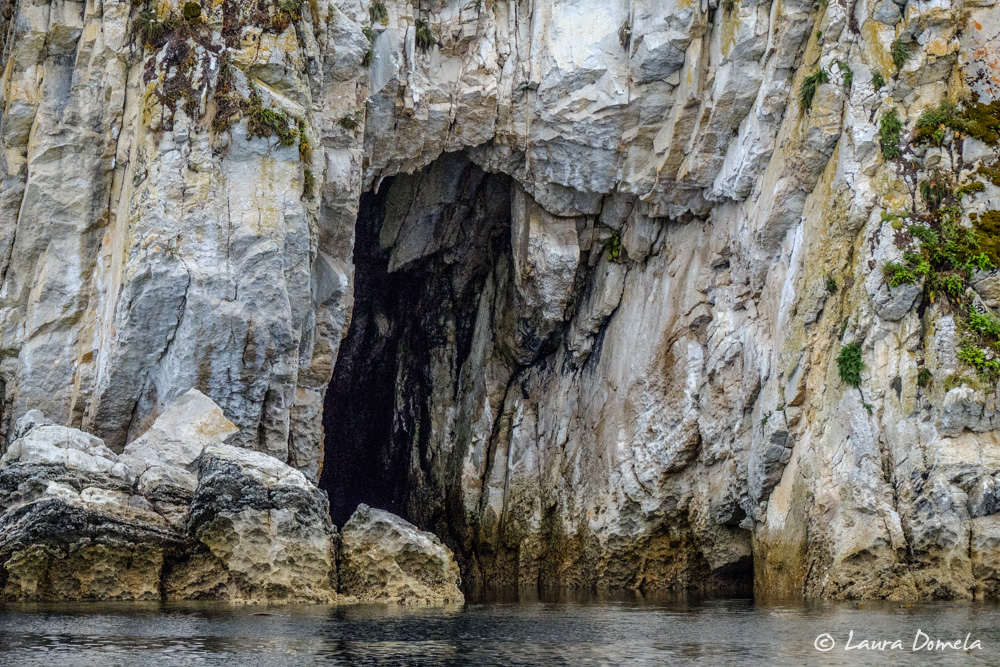 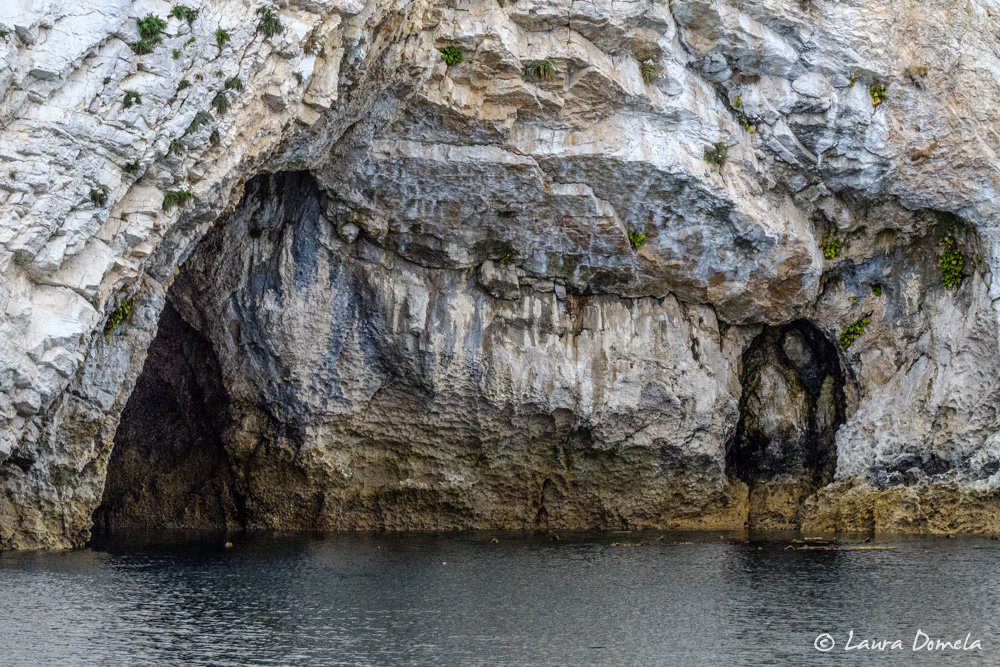 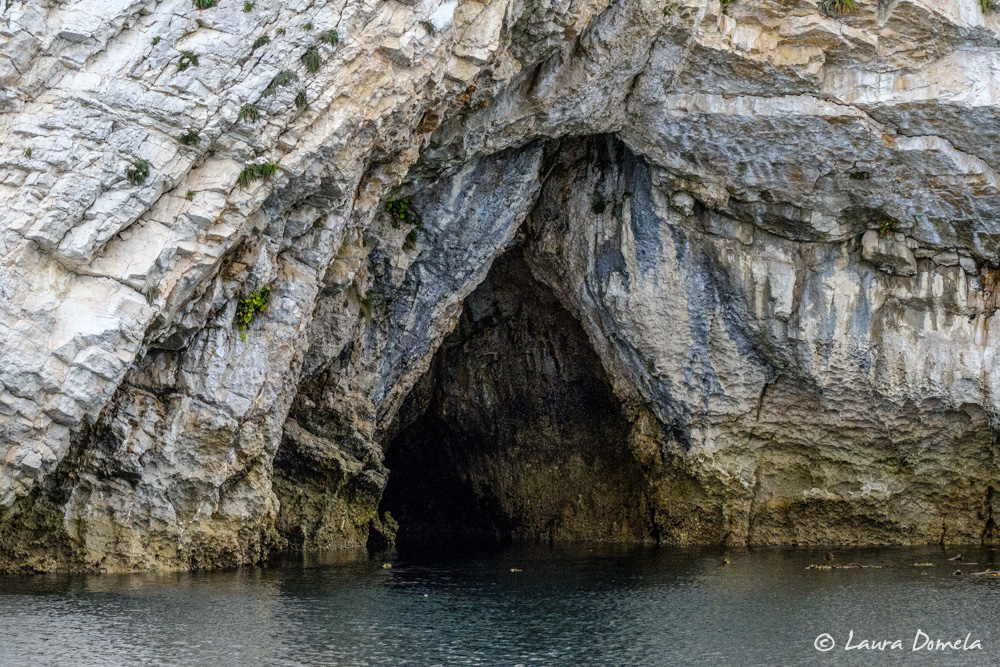 Most of these caves are underwater at high tide, made obvious by all of the brightly colored, closed up anemones along the interior walls. 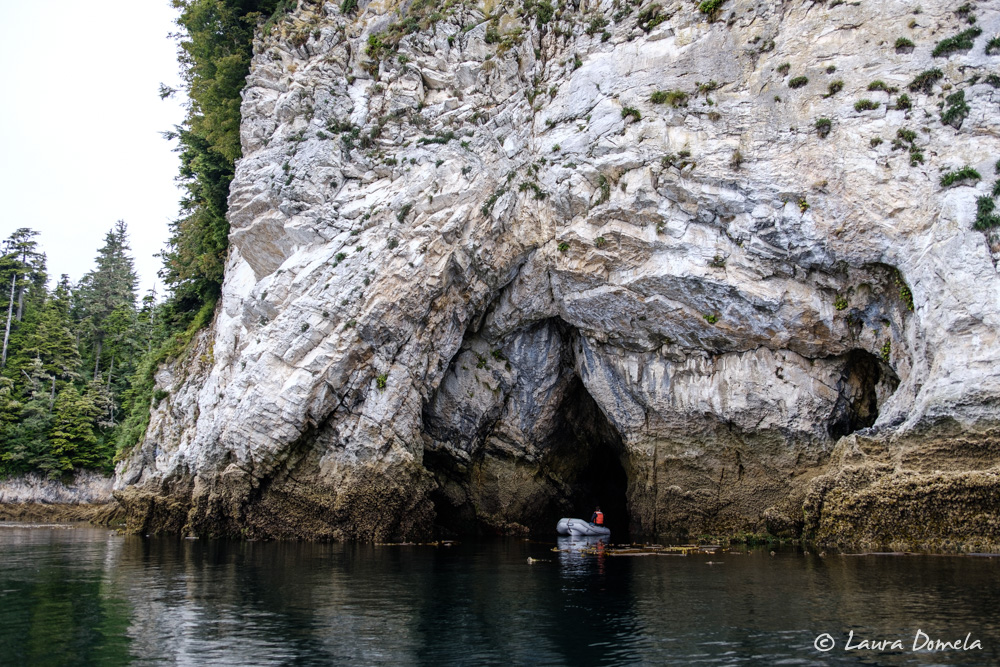 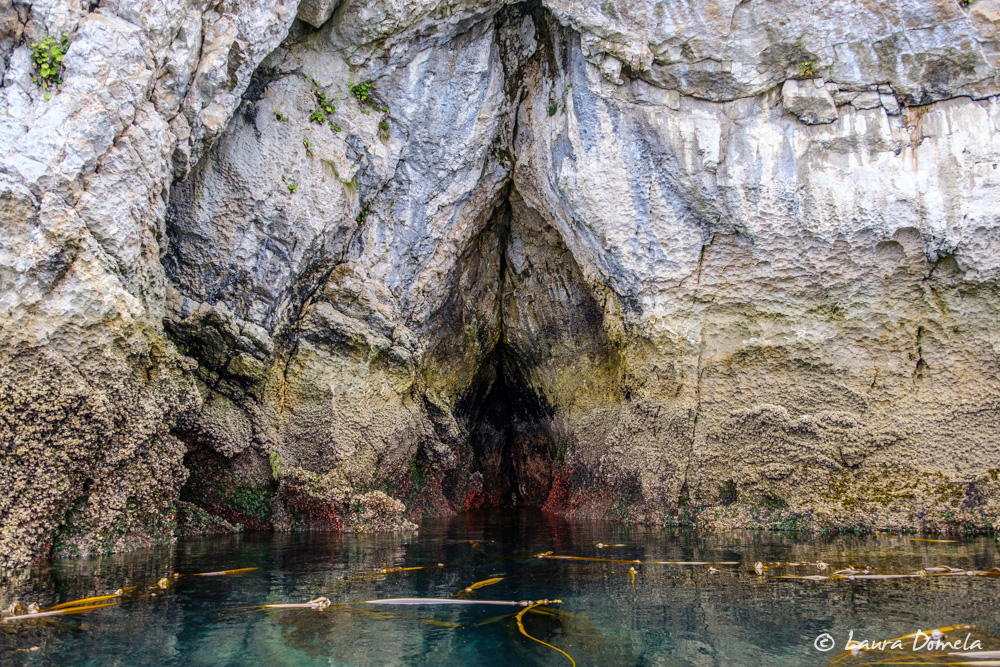 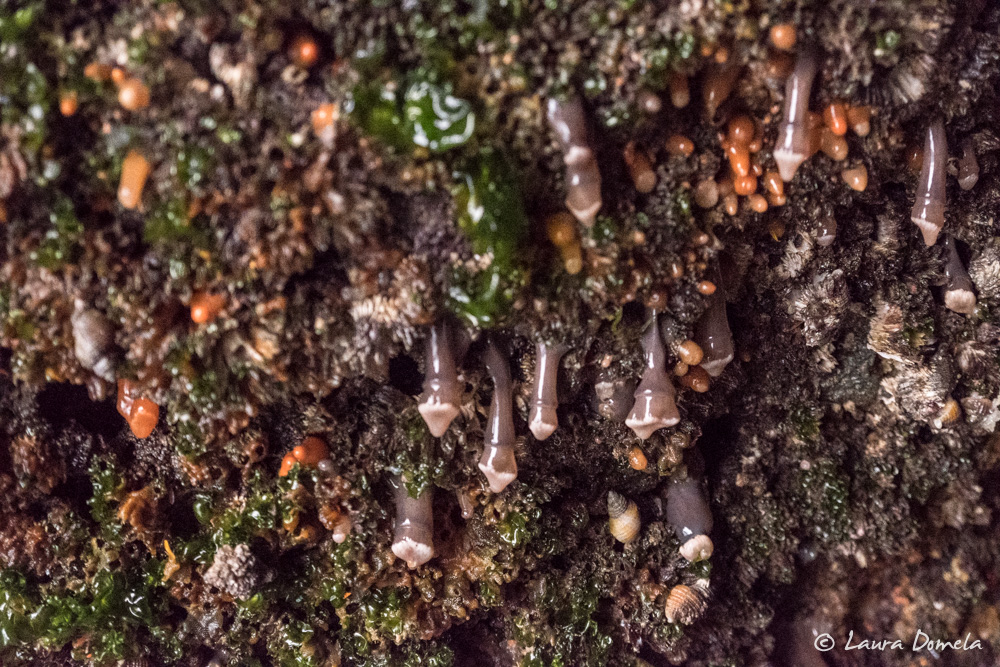 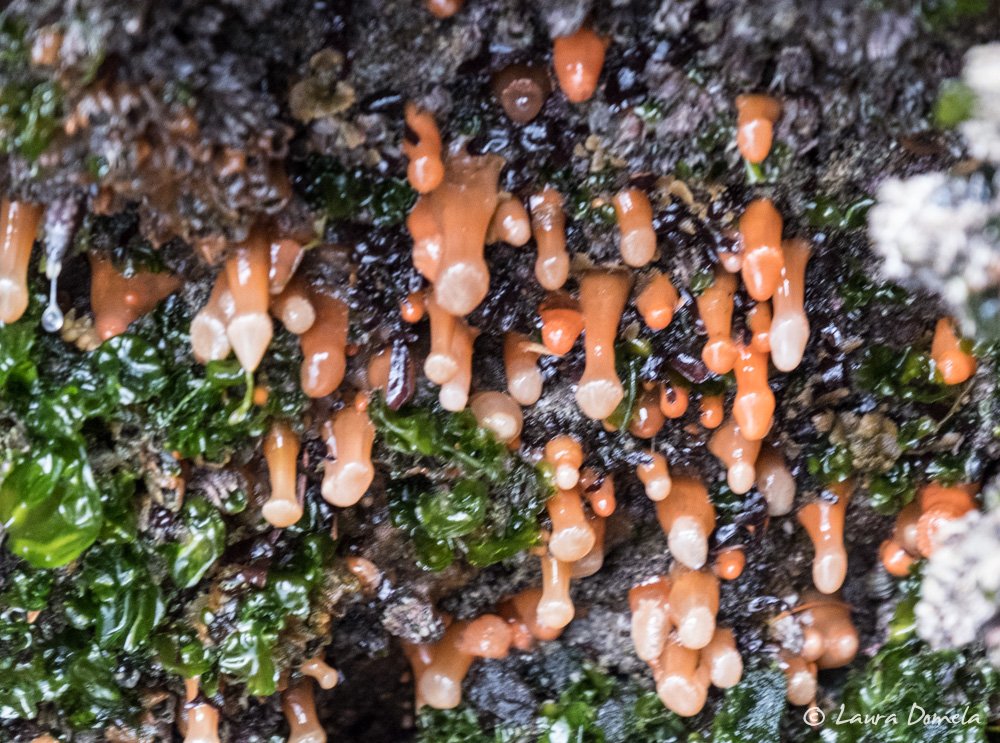 (And yeah, don’t say it. We know what they look like.)

Halleck Harbour to Bay of Pillars

In the morning, we left Saginaw Bay and headed south for Bay of Pillars. Chatham Strait can be a rough body of water, but it cooperated and we enjoyed light winds and calm seas. Kevin and Laura did some salmon fishing around Kingsmill Point, and caught a total of eight Coho (smallest – 24 inches, biggest – 27.5 inches) and one big black rockfish. 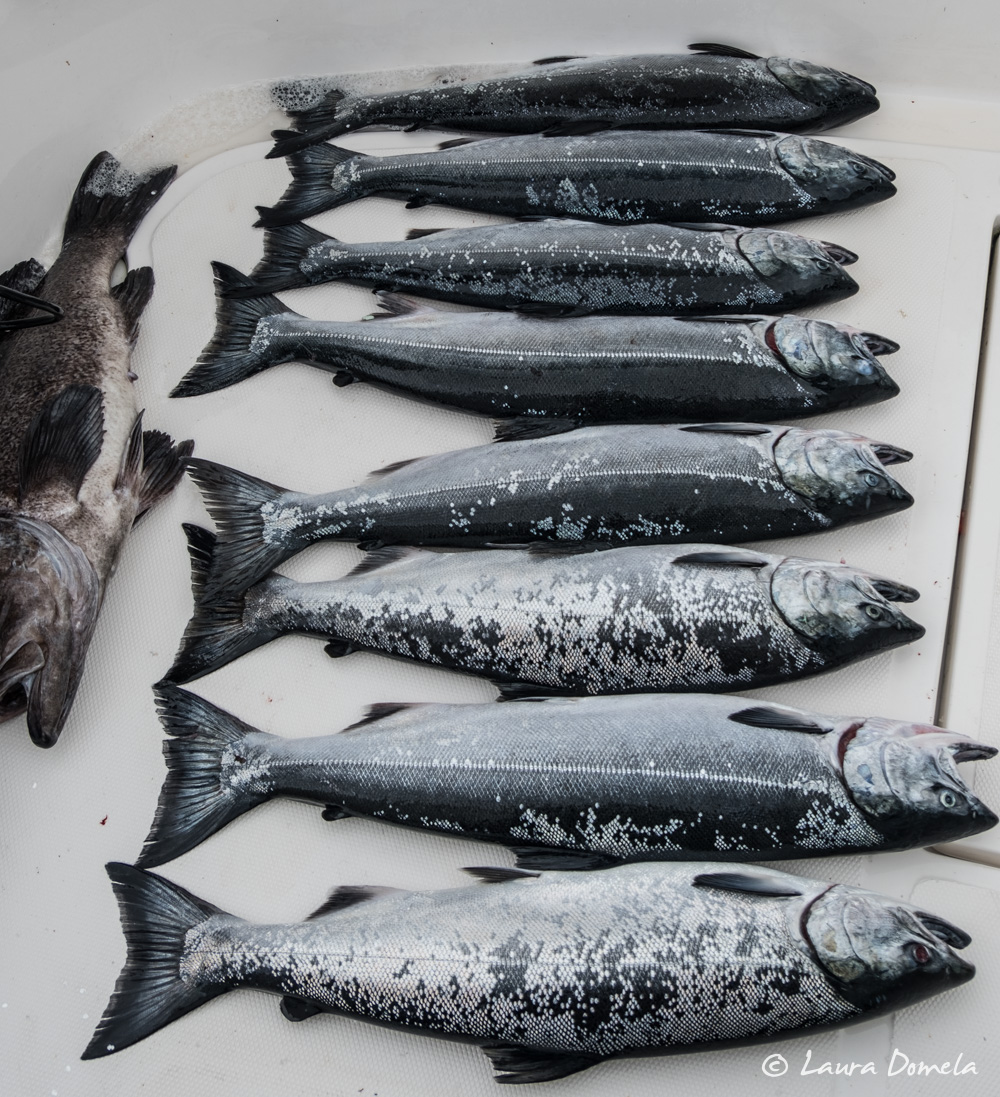 Not bad for a couple hours! Kevin spent the rest of the day underway cleaning and filleting Coho, and Airship met up with Safe Harbour in Bay of Pillars, at the Four Islands anchorage. Although the wind has been calm, the rain has poured down. We spent the afternoon inside Airship (while it continued to rain and rain) vacuum-packing Coho. Dinner was, guess what? Grilled Coho with lemon risotto and zucchini.

After dinner we were feeling rested (aided by a glass of wine or two) and Laura pointed out that the rain had stopped. We quickly donned rain gear (can’t be too careful!) and hopped in the dinghies for some exploring. Of course, as soon as we left the warmth and shelter of the boats, the rain returned. Oh well…we had fun anyway and got to see the rest of the Bay of Pillars.

We had anchored the boats in the outer half of Bay of Pillars. To get to the inner half we had to transit a narrow, questionably charted passage. The cruising guide made it sound fairly benign, with a few knots of current and plenty of depth. They may be right about the depth, but not the current. We found 5-6 knots of current, with big, boat-spinning whirlpools. We were glad we hadn’t tried to take the bigger boats in before checking it out first in the dinghies.

The weather certainly could be better (less rainy, less gray) but so far the sea conditions are ideal for exploring the outside of Kuiu Island. Winds light, seas 2 feet or less…until Saturday when the conditions are forecast to deteriorate. We’ll stop for the night on Wednesday in Explorer Basin, then go down to Egg Harbor on Coronation Island on Thursday before heading across and over to Craig by Friday night.

Bay of Pillars to Explorer Basin

Today was a short cruise down to Explorer Basin at the mouth of Tebenkof Bay. We pulled anchor after breakfast and enjoyed a gray, foggy, rainy, and calm cruise. Just as we were entering Tebenkof Bay and as we were tracking a couple of hard-to-see-in-the-fog trollers, we noticed a bunch of splashing and some dark spots. A couple of humpbacks were breaching and tail slapping in the foggy distance! We stopped to watch and pretty soon found ourselves in the middle of three groups of humpbacks bubble-net feeding. We turned our engines off and just floated there in the gentle swells, watching and listening to these incredible creatures.

It’s difficult to get decent photos in these conditions because until the whales break the surface, there’s nothing to focus on. The sky and the water are the same color, blended together as a single, gray mass. We managed a couple of late shots and some shots of the whales at the surface or diving. 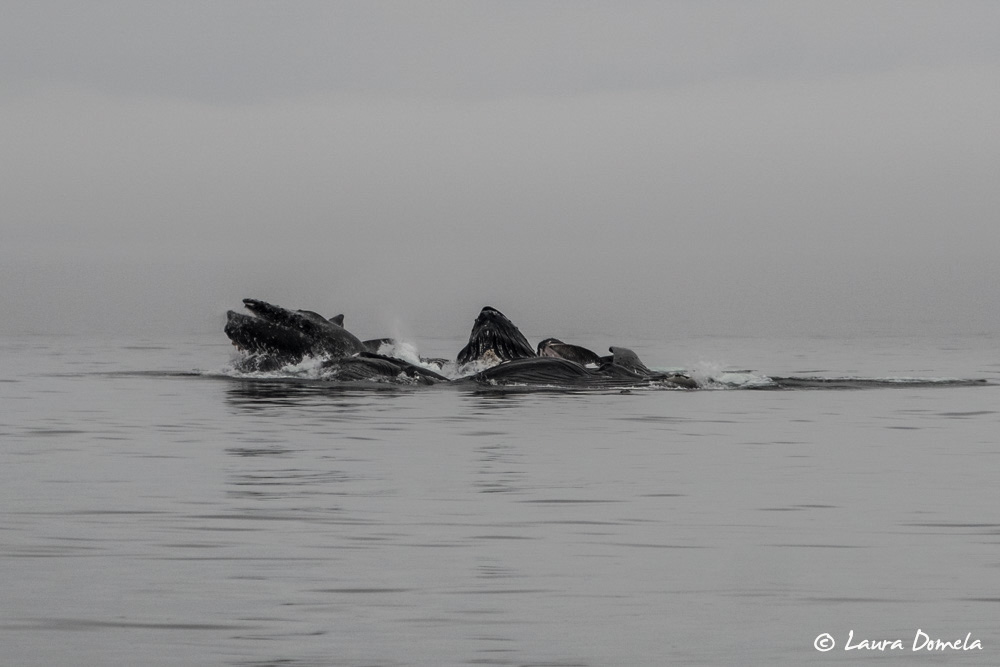 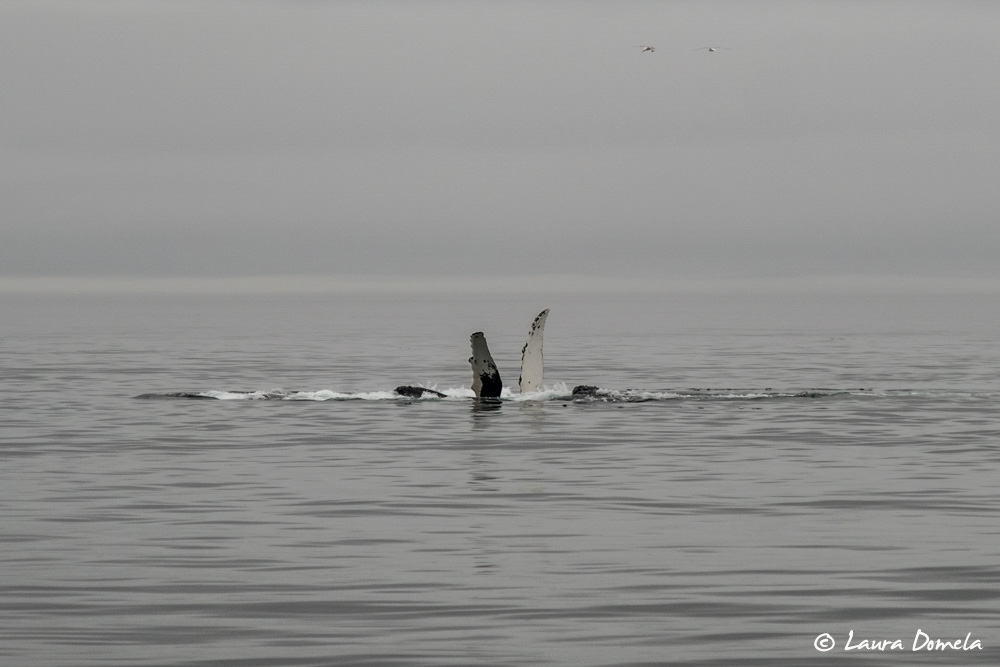 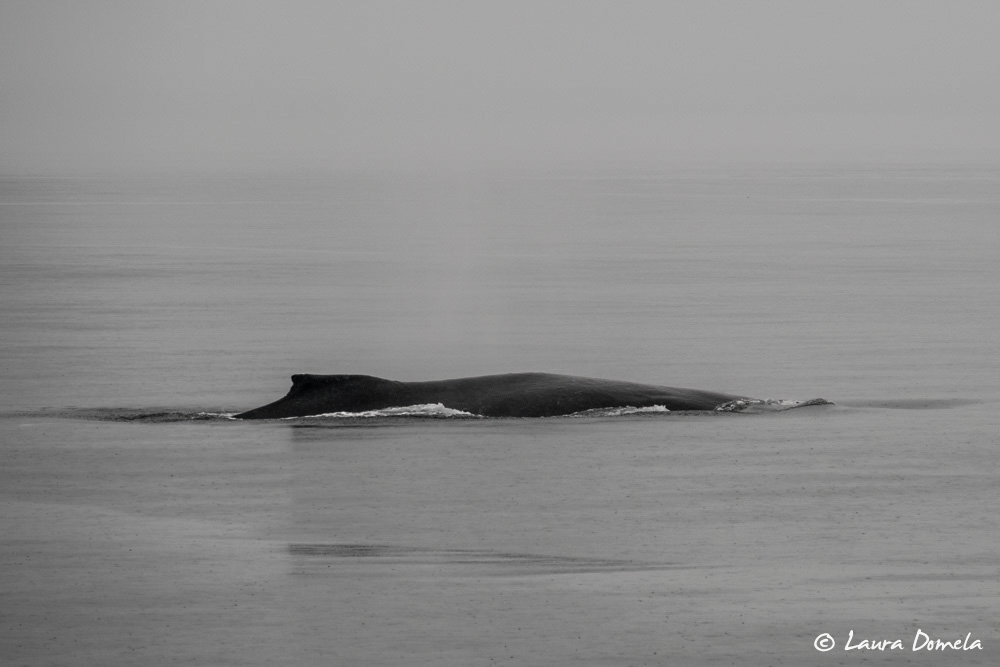 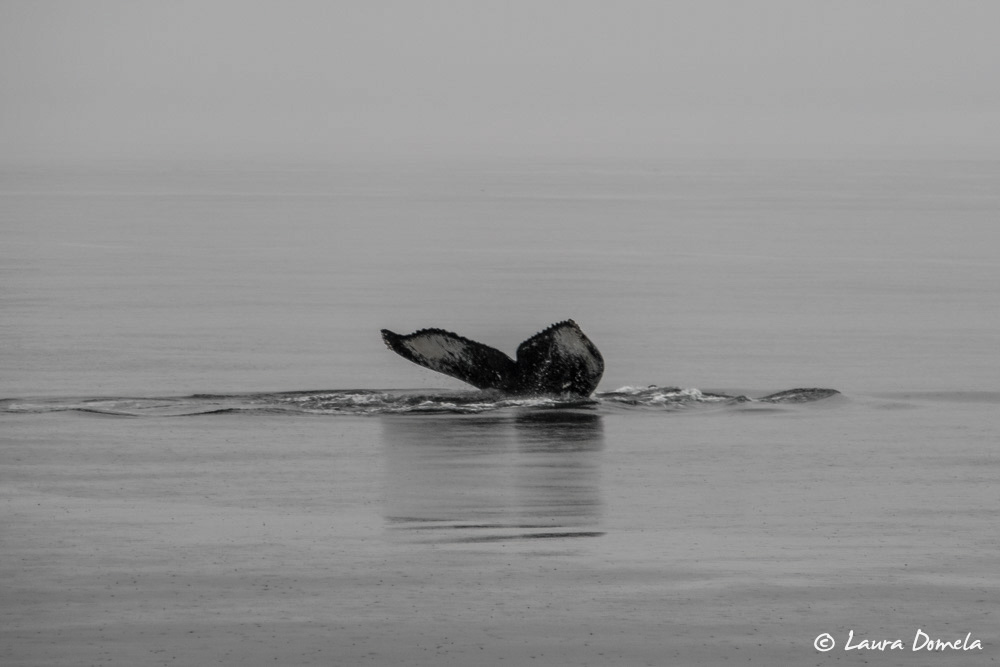 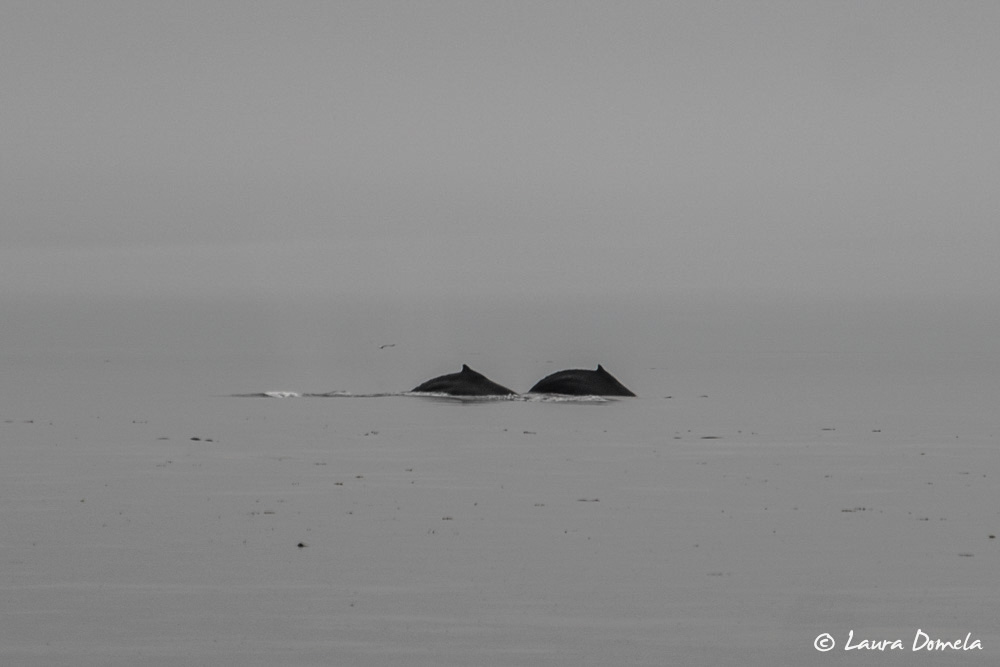 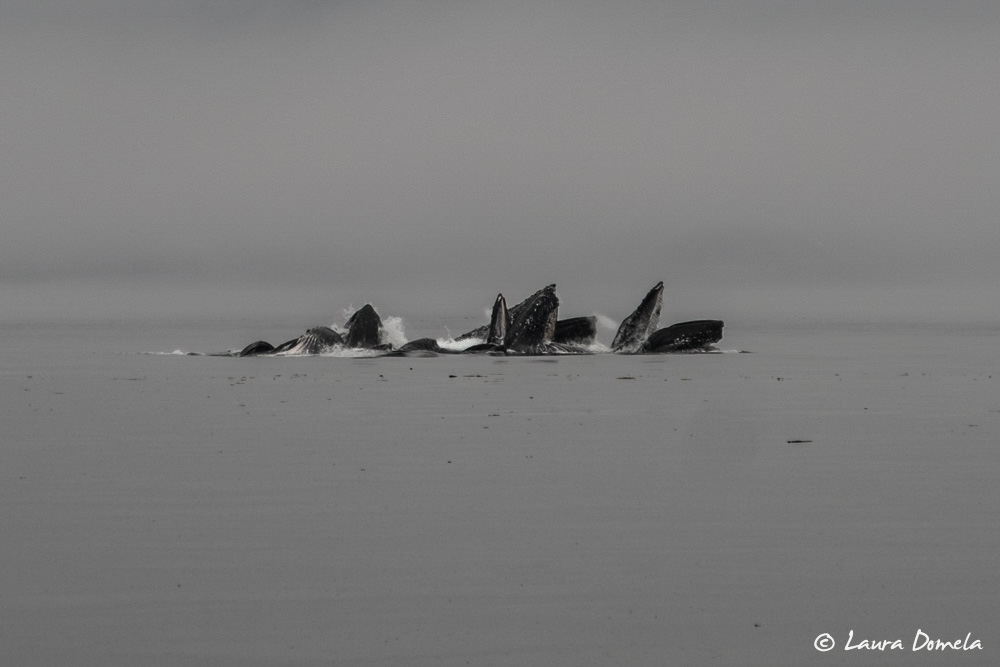 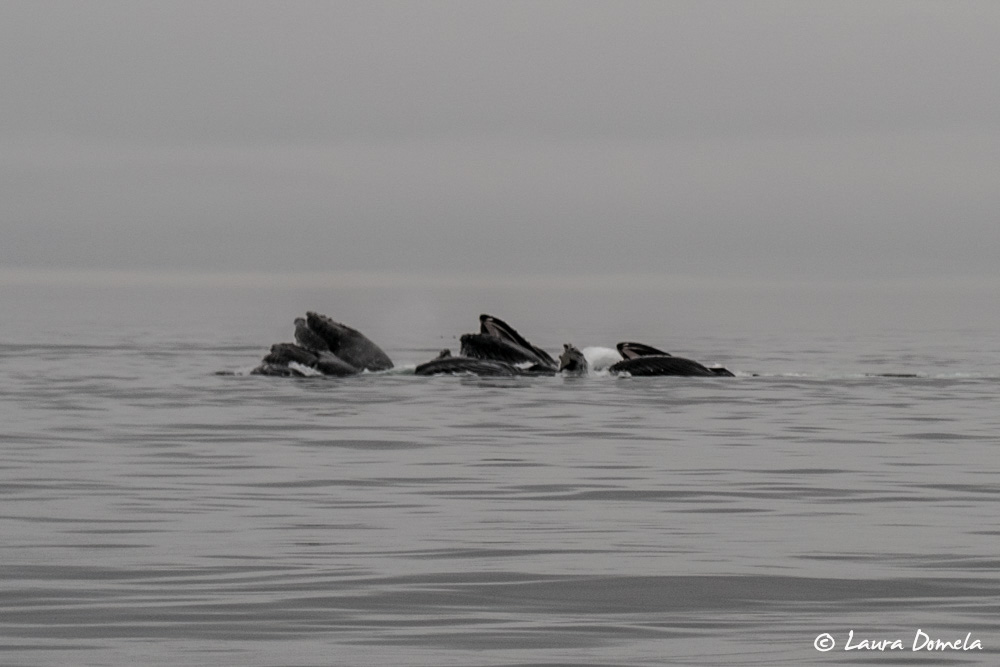 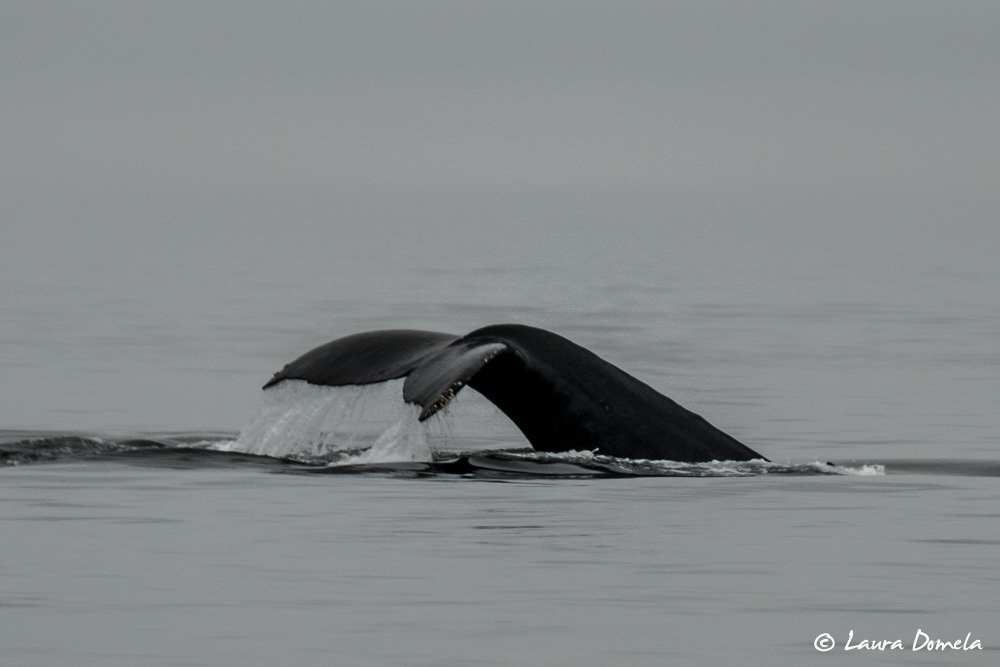 Listening to the whales was as remarkable as watching them. One of them sounded like a nearby foghorn (enough so that it might cause a quick re-check of one’s radar screen). Another was higher pitched, almost squeaky. When a whale’s blowhole is misshapen or damaged by an accident, they can flap and make some amazing sounds.We’d first heard this sound (and perhaps this same humpback) outside of Tenakee Inlet earlier this summer…the whale with the deep, deep bass horn that sounded like someone blowing a giant conch shell at sunset. We managed to get a quick recording of the higher pitched one today. Listen here:

After an hour or more of floating around with the whales, we headed into Explorer Basin for the night (past just ONE more group of bubble-net feeding whales, plus a couple solo ones). It was rainy and gray, but remote and beautiful. The plan was to make salmon chowder for dinner, with a caesar salad to use the last of the romaine.

But, before we could start fixing dinner, the halibut rod that Kevin put out when we anchored (in about 70 feet) suddenly was seeing some action. We watched and waited until whatever had chomped down on the bait started to swim away with it, and the battle was on! This was a big fish!

Kevin brought the fish to the surface, Laura harpooned it (twice, because we had a telescoping issue with the first try), while Sam (a vegetarian) watched the drama unfold. Once dead (mostly) and onboard, we measured the length of this guy to be 57 inches, making it approximately 92 pounds. 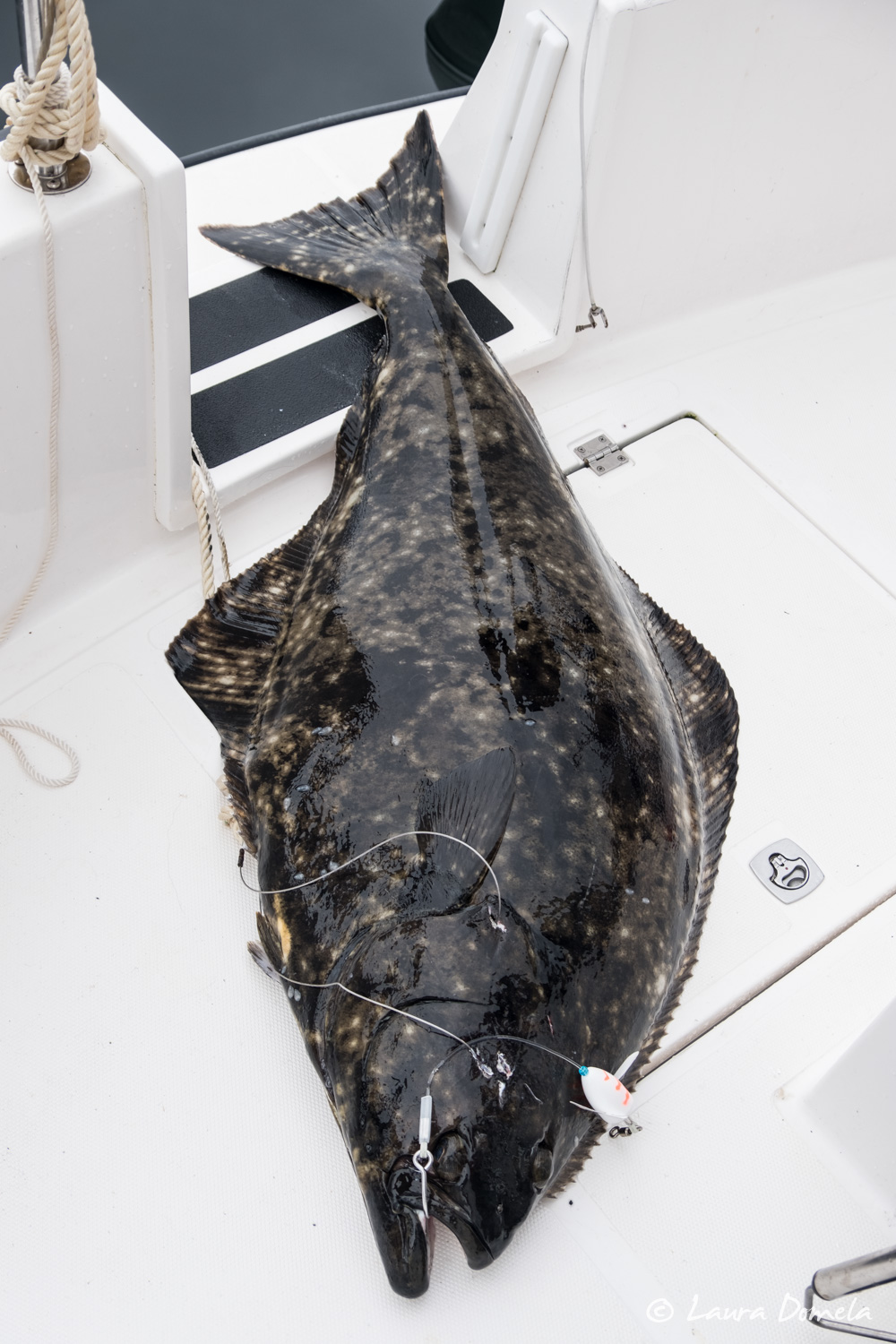 Our plans for leisurely putting together some salmon chowder and grilling some garlic bread were tossed by the wayside and we spent the next three hours filleting and vacuum-sealing halibut (while orcas swam around in the distance, and a humpback surfaced about 200 feet from our anchored boats). We reckon we’ve got 30-40 pounds of halibut in the freezer (along with the fillets from the eight Coho from the day before) and the freezer is now full (with a little spillover into Sam’s freezer). Looks like Kevin got all his fishing done in two days!

Dinner (instead of salmon chowder) was grilled halibut, caesar salad, and pasta. We didn’t eat until 10:00p.m. 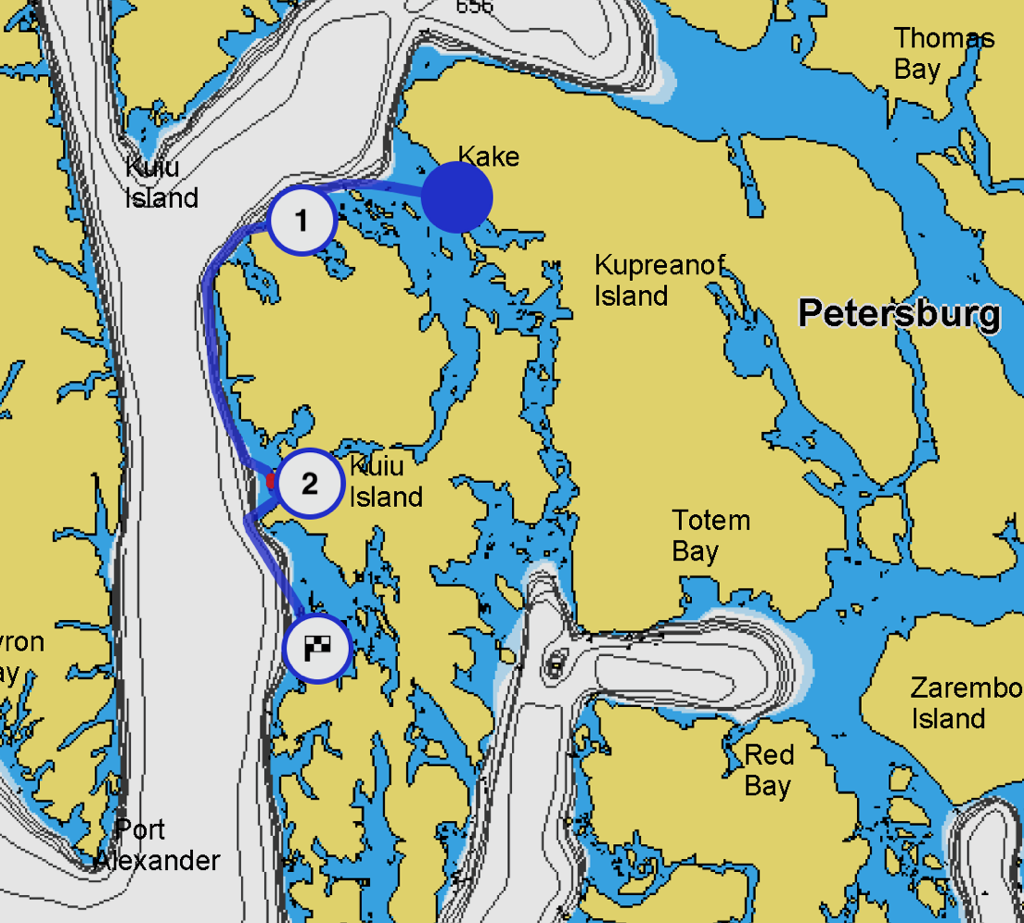 Tomorrow, we’re off to Egg Harbor on Coronation Island (about 34nm south in Chatham Strait). Really loving all the new ground we’re covering!