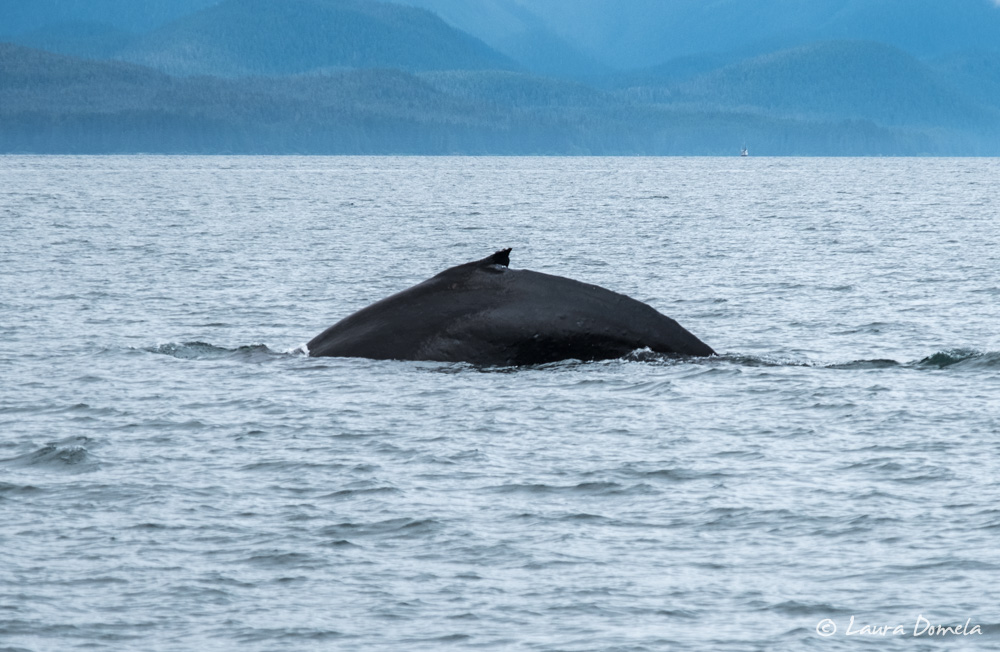 After our incredible day at Pack Creek, we headed back down Seymour Canal, joined by a couple of humpbacks. 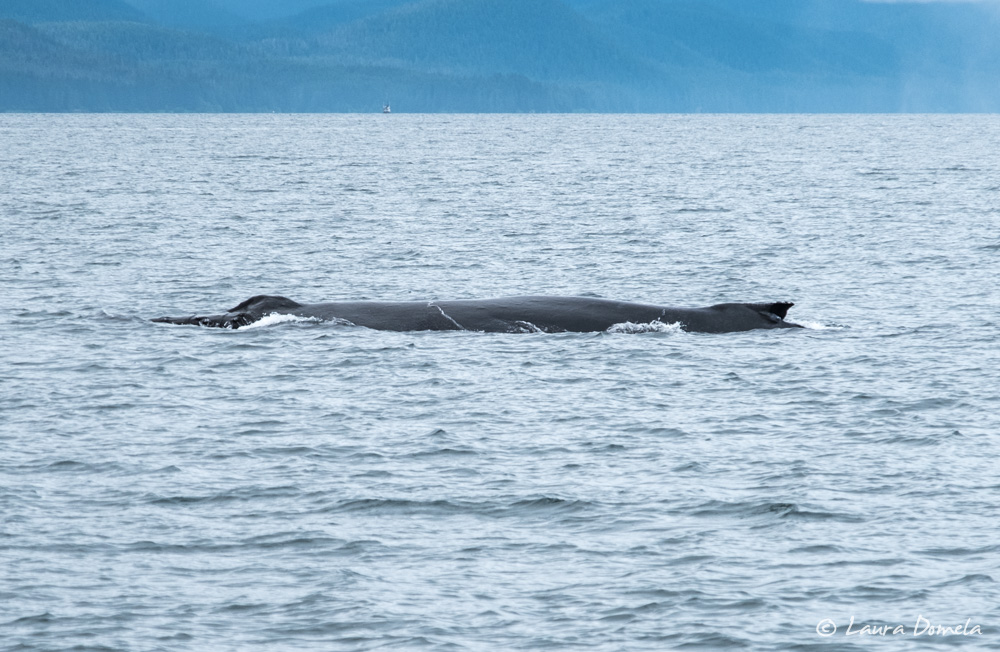 Then, as we were cruising across Stephens Passage toward Windham Bay, we were greeted by about 30 Dall’s porpoises who played in Airship’s bow wake for about a half an hour. We never tire of these guys—they’re so playful!! 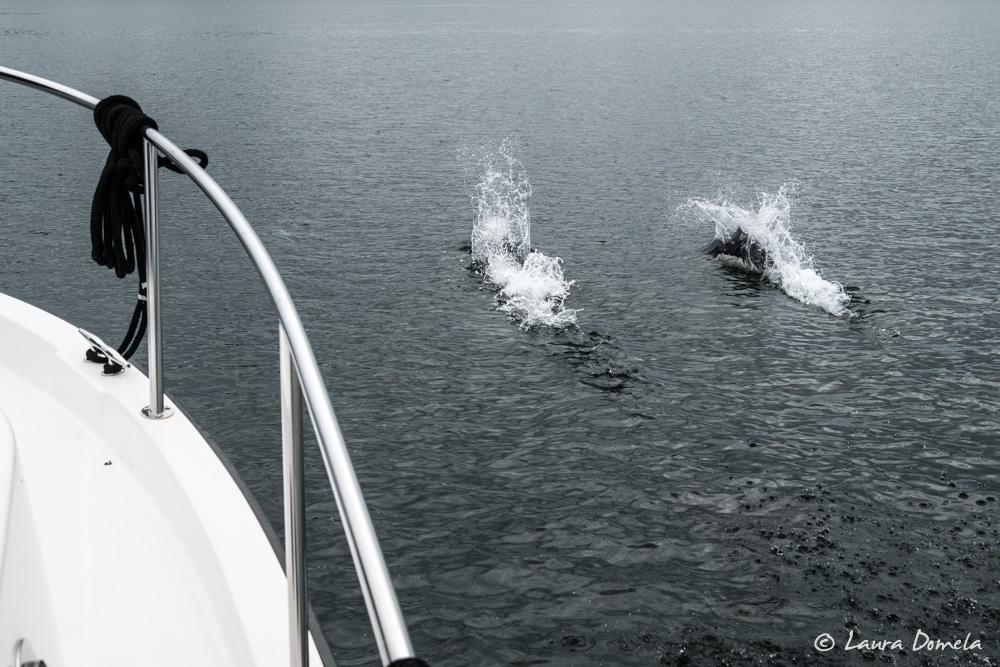 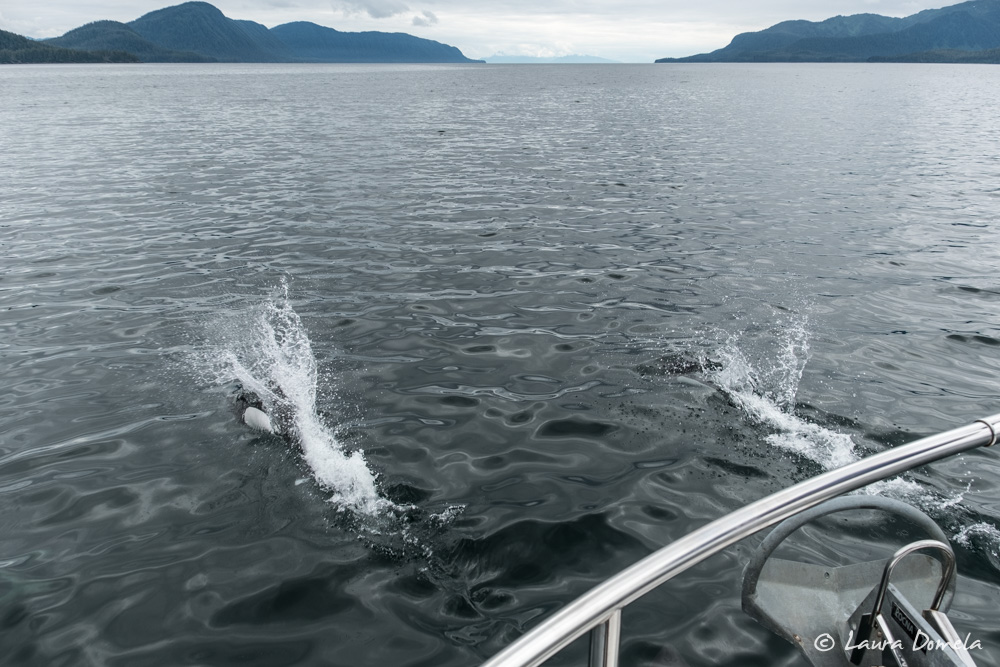 We anchored in the southern nook just inside the entrance of Windham Bay. The anchorage goes from rather deep (120+ feet) to drying mudflats in just a few boat lengths, and the chart isn’t detailed enough to provide any meaningful information. Kevin and Sam flew the drones for some overhead shots that show this more clearly: 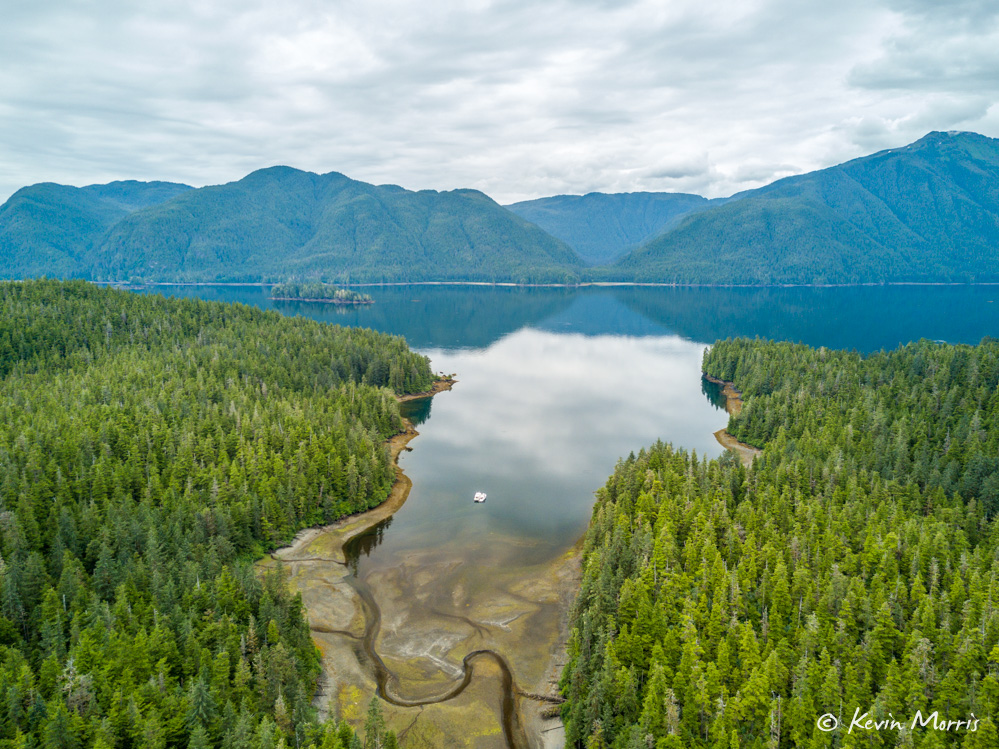 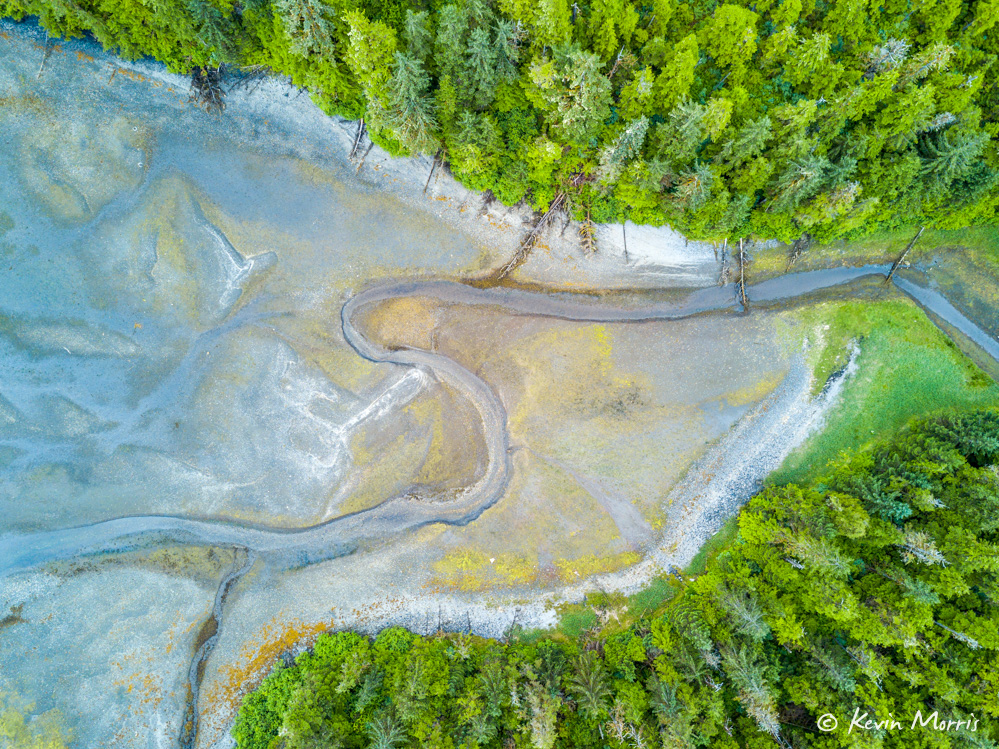 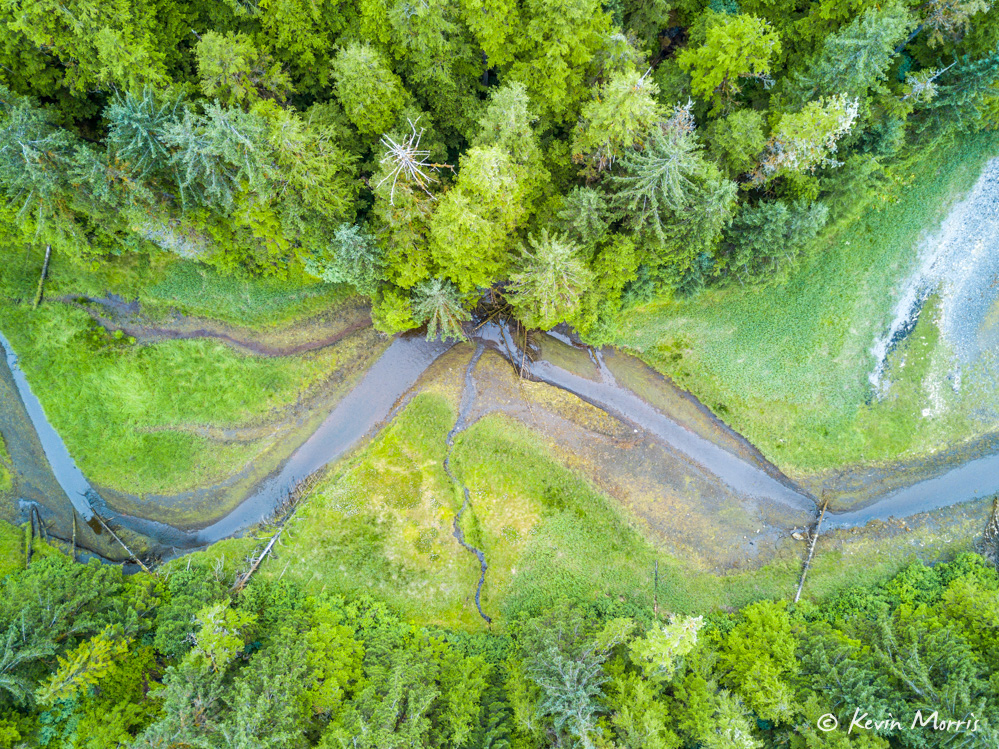 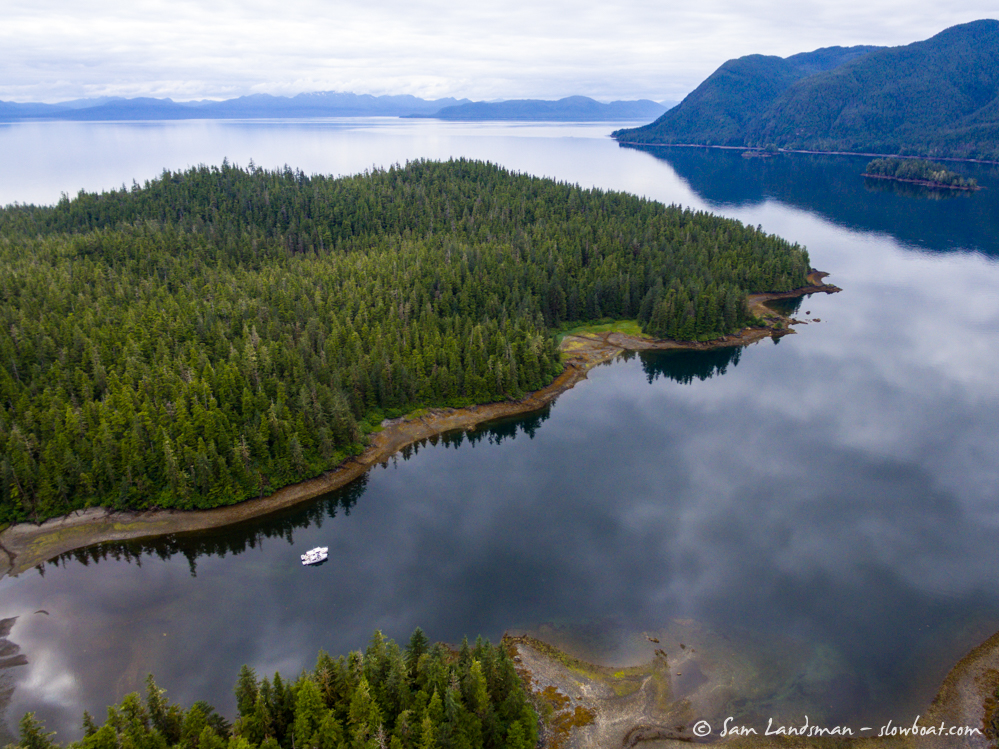 Next, we took the dinghies up to the narrows and into the inner bay for a look around. 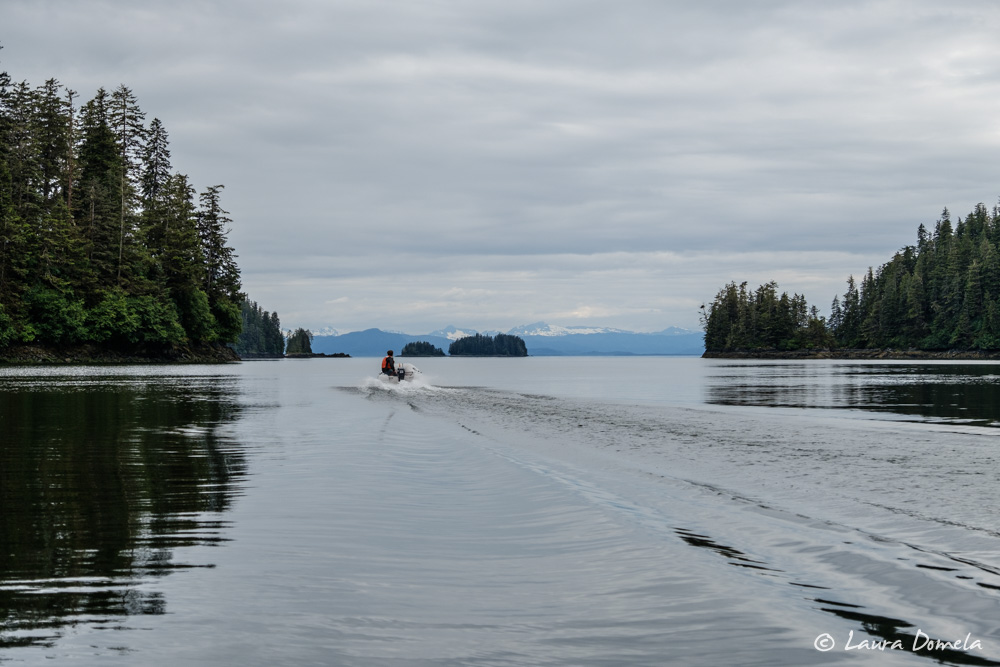 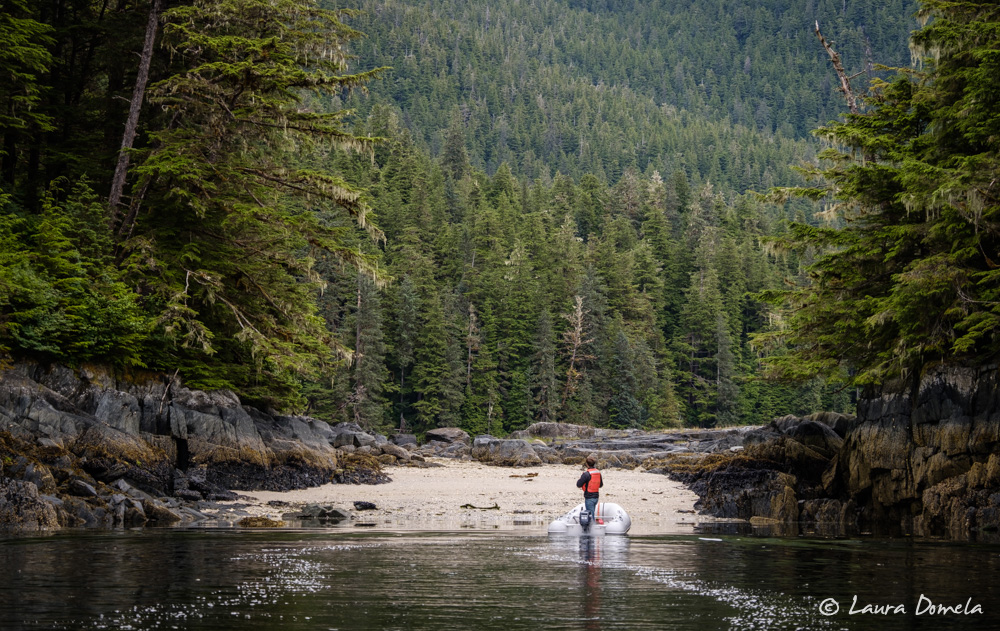 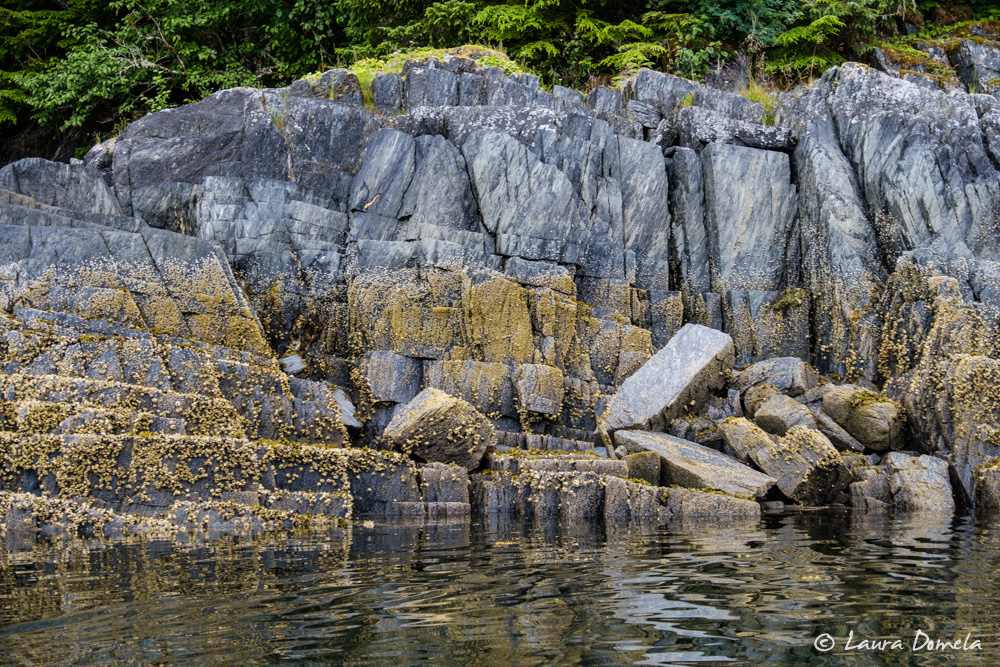 There’s what looks to be a small lodge, but no one was home. The chart says “Abandoned” but this place looks like it’s had some recent improvements and could be a nice little fishing lodge with guesthouses, a newish dock, and a hot tub! We did some Googling and found reference to a “Windham Bay Lodge” real estate listing (no longer on the market)…so apparently someone bought the property and is actively improving it. 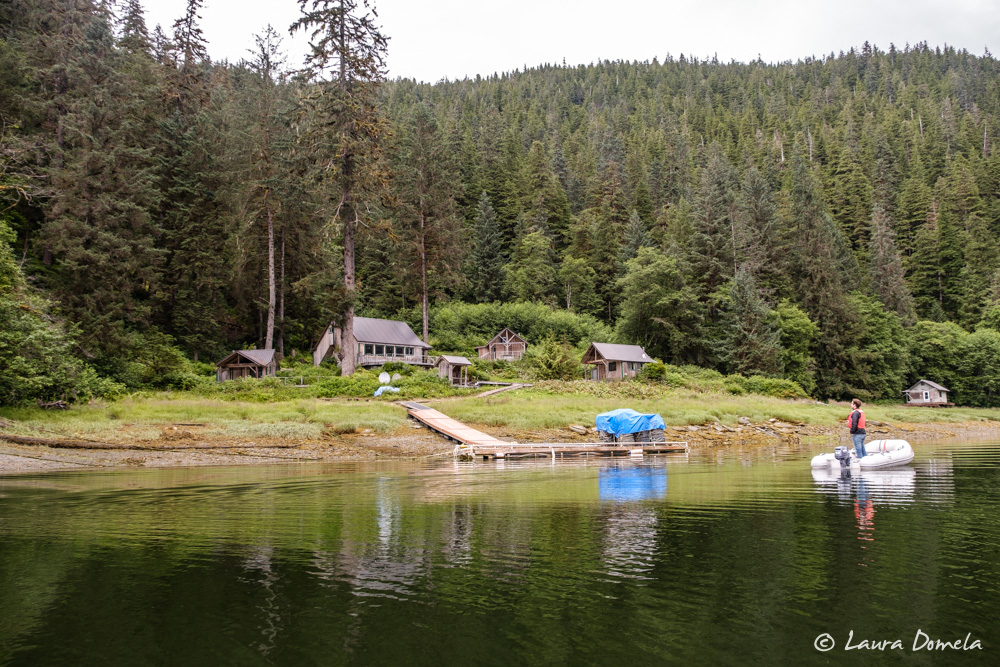 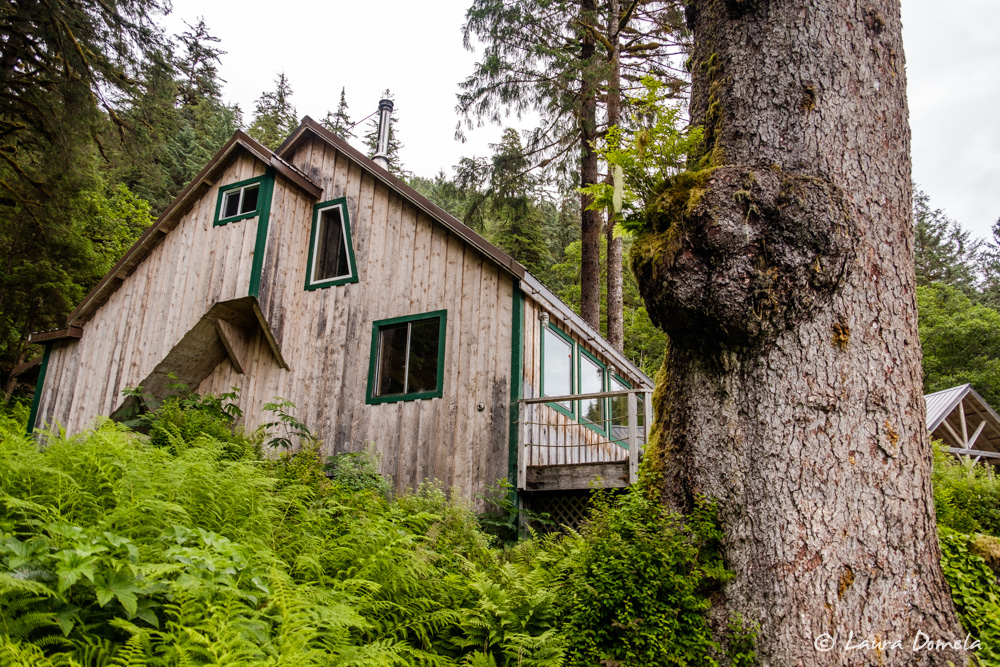 Carol and Park on Akeeva met up with us in Windham Bay later in the evening, and the next morning we all cruised up to Ford’s Terror. We arrived outside the narrows right around Juneau high slack, and then while we waited for the current to turn (or at least lessen), we took people from neighboring boats in by dinghy to see how the rapids were looking. (For those who haven’t been here before, this is a good way to get a feel for what the narrow entrance looks like once inside, and where the channel is…it’s tough to tell where the entrance is at all when you haven’t been inside before.)

By the time we went in (about 20 minutes after Juneau high slack) we had a couple knots of current still with us, but everyone got through with no issues. This is the most boats we’ve ever seen in Ford’s Terror! Airship and Safe Harbour, Akeeva, more friends on Mellow Moments, and then three sailboats. One sailboat was inside when we arrived, so that made 8 boats at once! 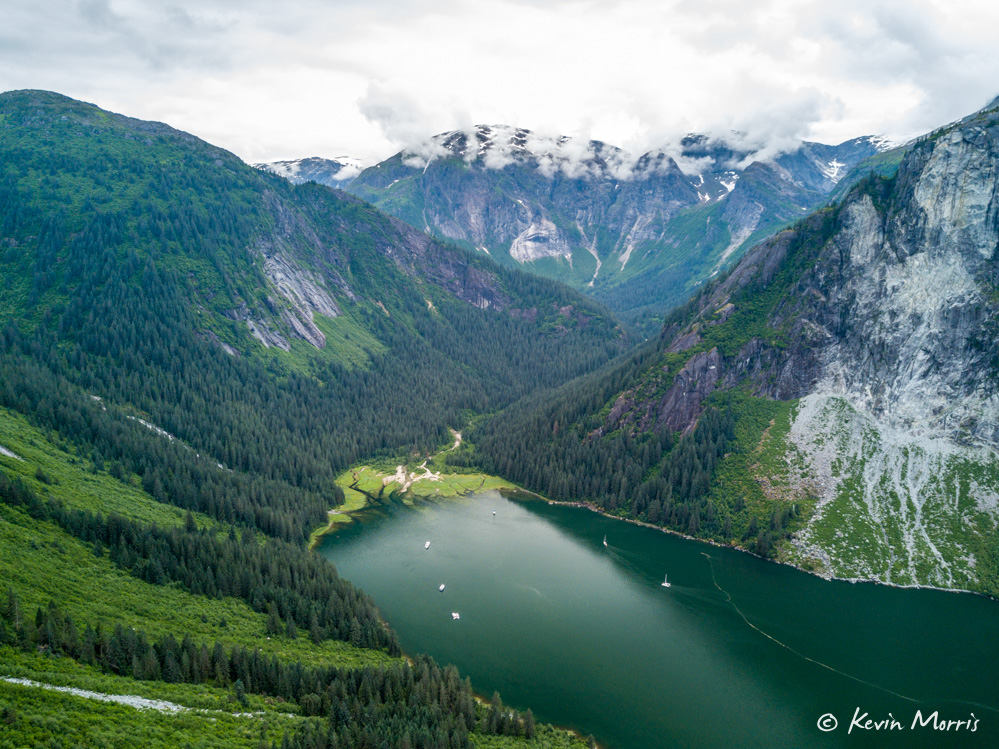 After everyone was anchored and settled, we did a group dinghy trip around the fjord, exploring the east arm first, and then the multitude of waterfalls and towering granite cliffs. 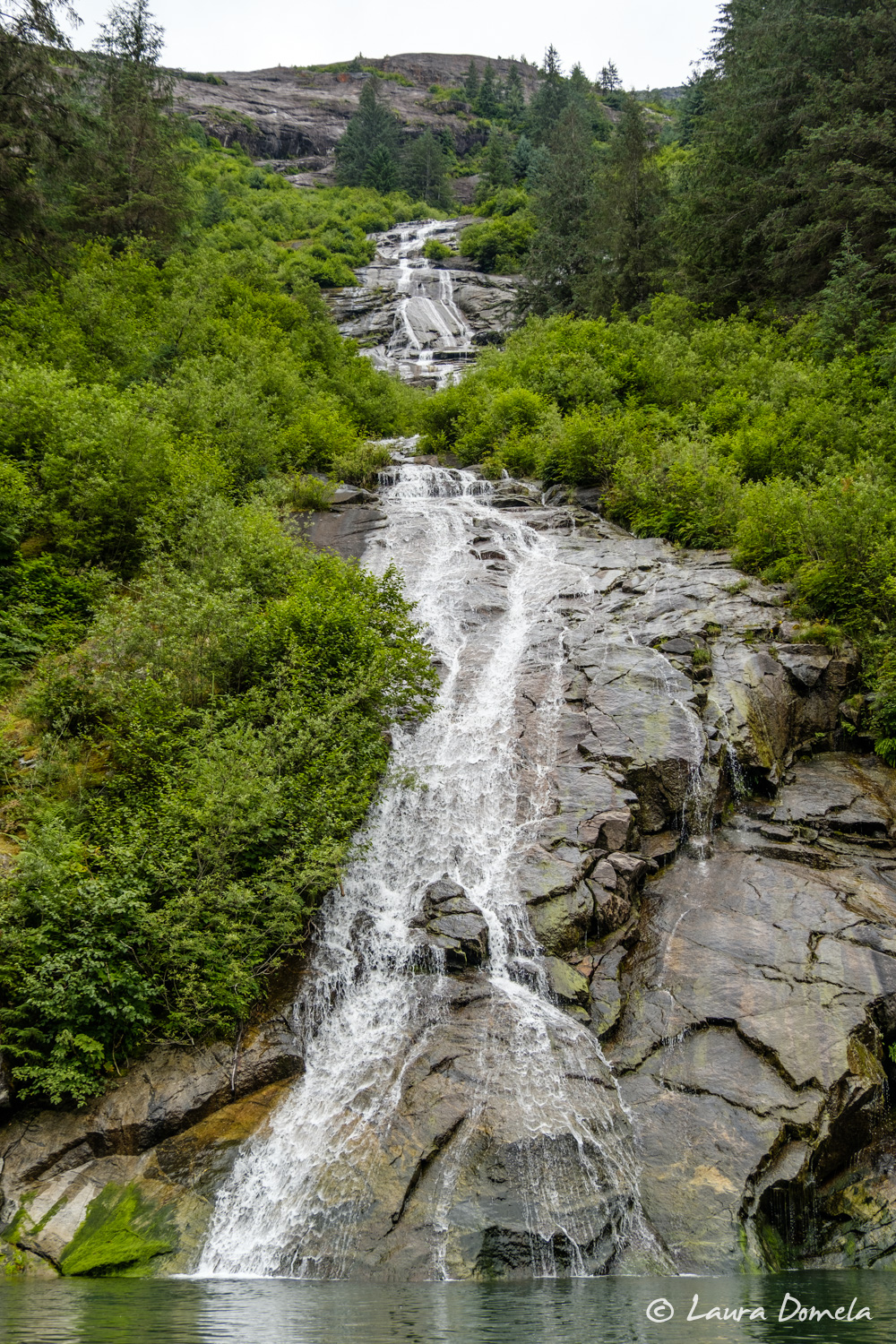 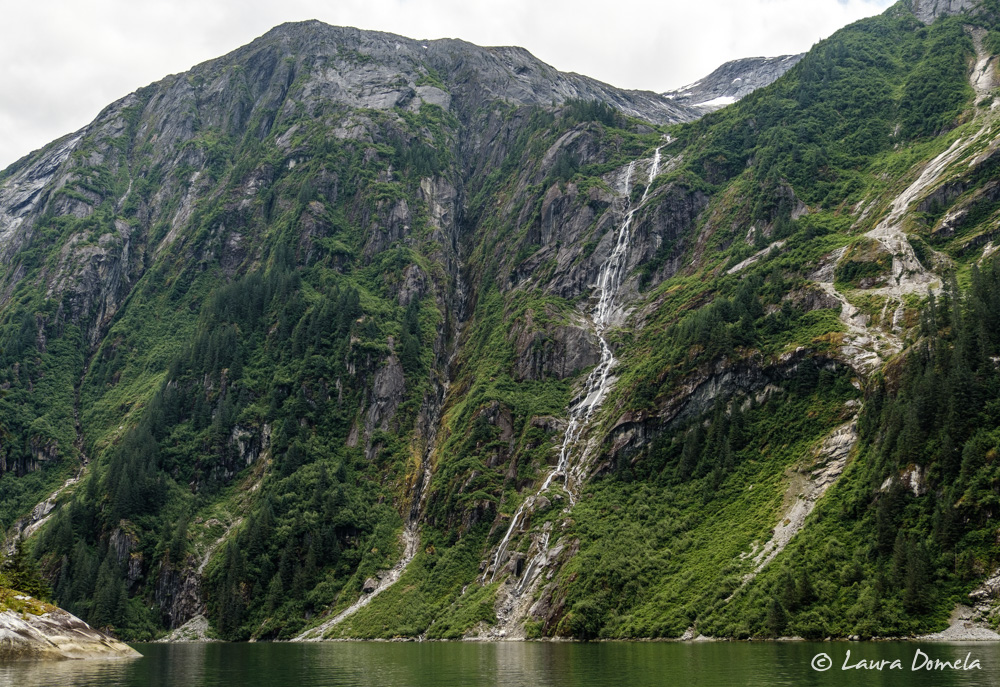 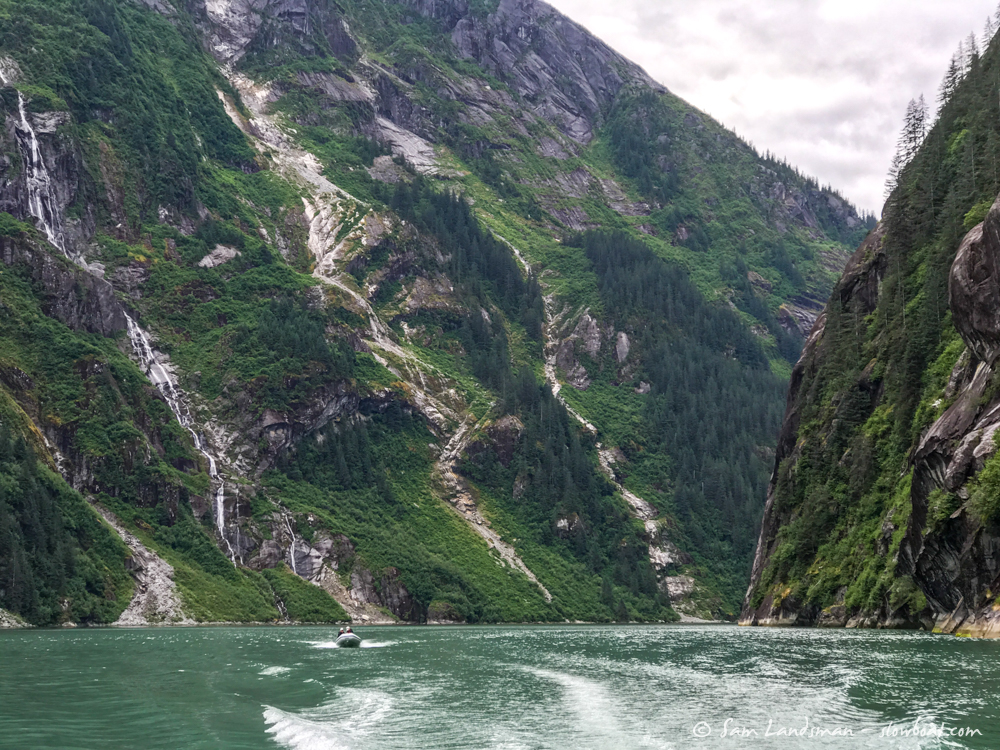 There’s a big cut in the rock on one side of the fjord that looks like this as you pass by: 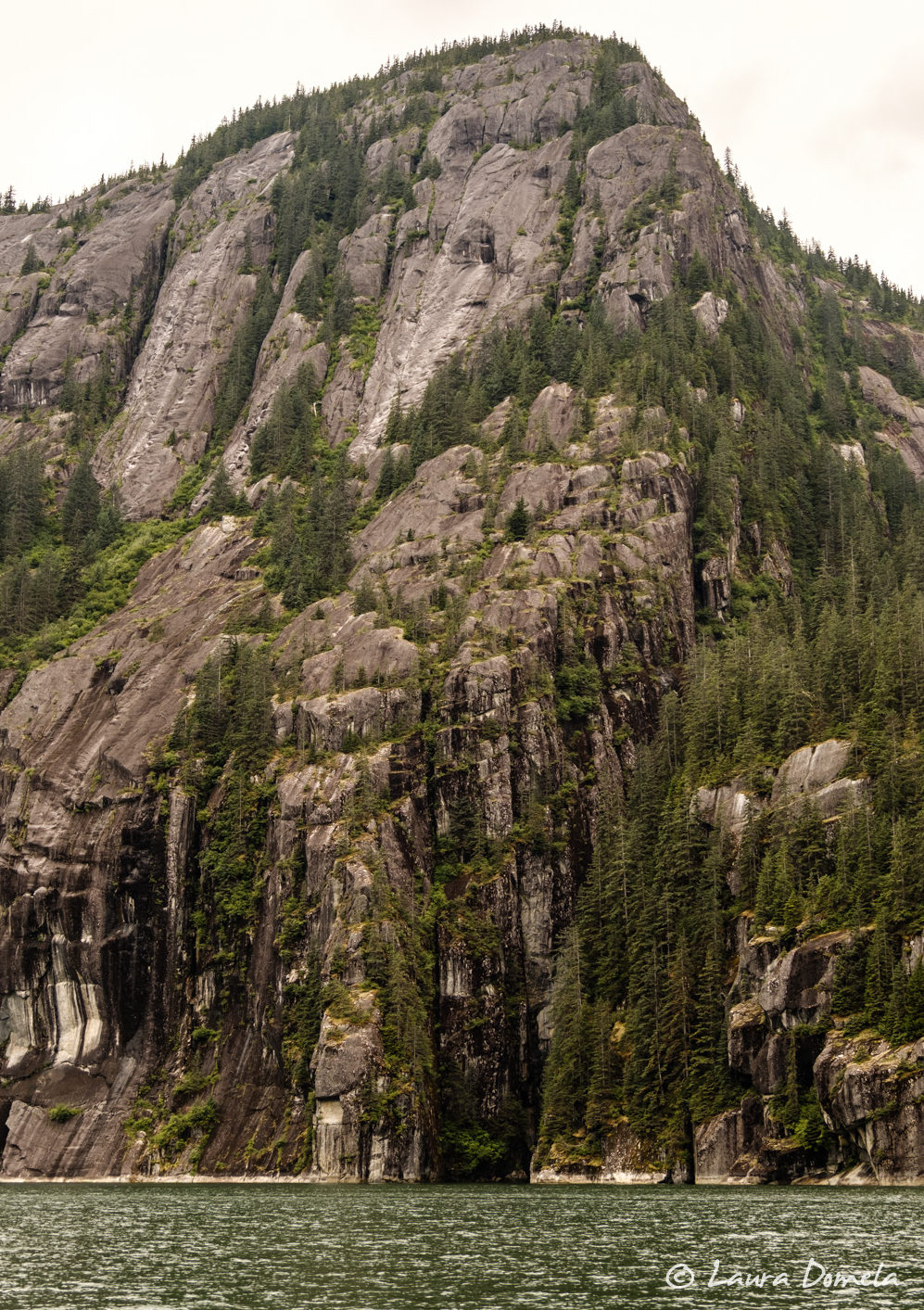 As you get closer to the opening, the reward slowly emerges. This is best done by dinghy, but a smaller boat can easily nose into the crack when conditions are calm to peek at what’s inside. 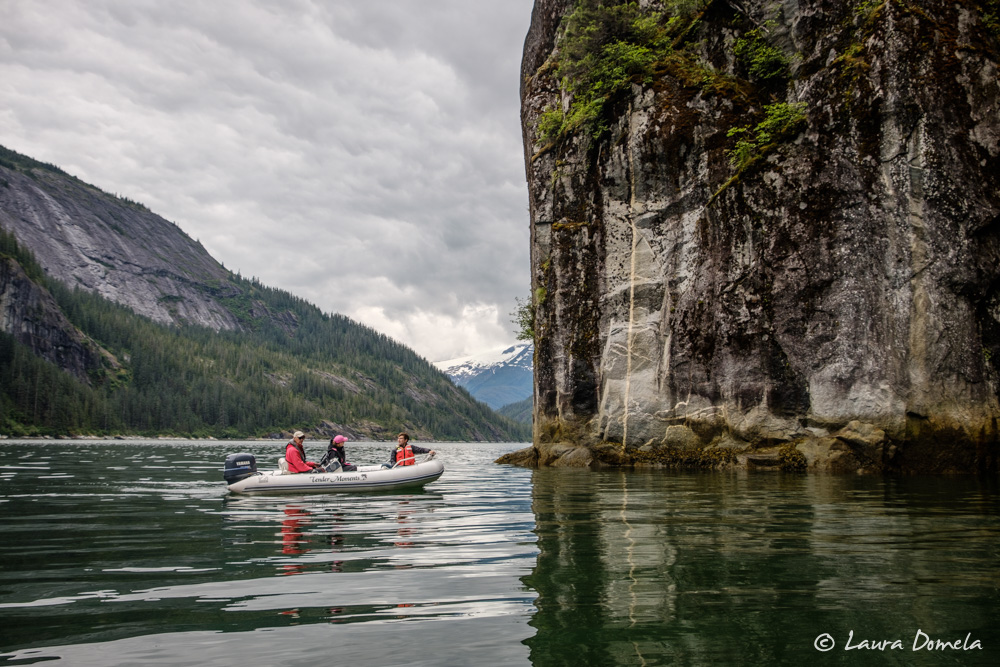 Inside the huge dark crack in the cliff, a very tall waterfall cascades quietly down a giant slide of rocks. It’s difficult to describe in words, and even photos don’t do this spot justice. This photo below makes it look like a normal waterfall similar to all the other in here, but it is definitely not the same. The waterfall is inside this large fissure, and it’s dark (darker than this photo). The rock walls tower skyward on either side of you. The fissure is big enough that our three dinghies could fit inside at once, with tons of room to spare. A confident skipper could get a 50-footer in.

Another fantastic visit to Ford’s Terror!

In the morning, all eight boats left Ford’s Terror at high slack around noon, and no one entered. So…one night there were 8 boats in there, and the next day…not a one.

Airship and Safe Harbour anchored for the night at Wood Spit,  just outside the Endicott Arm bar, and Akeeva continued on down to Sandborn Canal. We fished for halibut for a bit and had two good bites but caught no fish.

Wood Spit is a popular anchorage for large yachts (we shared it with 130′ and 242′ yachts), since there’s much more swinging room (though less protection) compared to nearby Tracy Arm Cove. This was our first time spending the night at Wood Spit, and we were impressed! The view of Sumdum Glacier makes for a dramatic backdrop, and the wakes from passing cruise ships weren’t that bad. 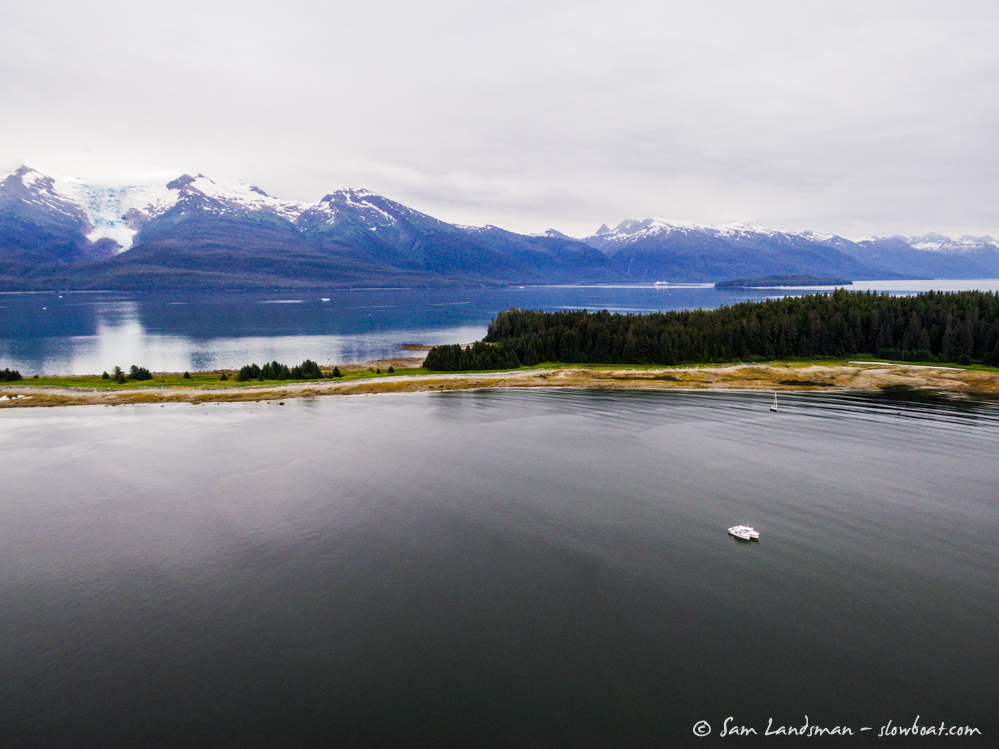 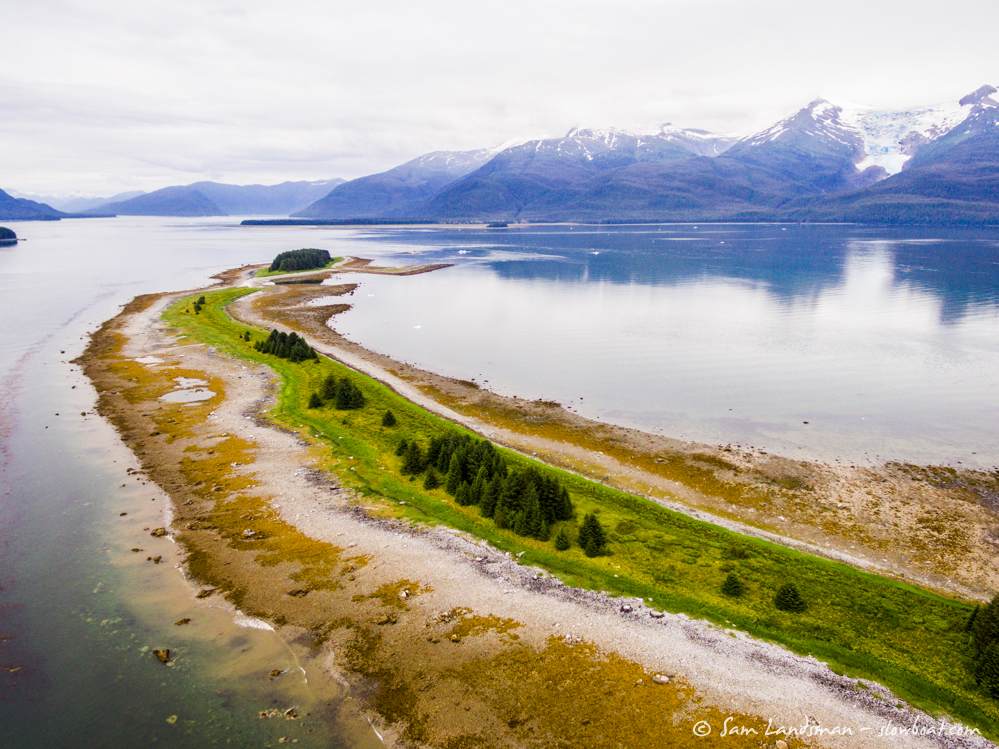 The next day we texted Akeeva (via Garmin InReach) and convinced them to stay another night in Sandborn Canal. We met them there and had another fun evening together — dinner (homemade vegetable soup with garlic bread) and a movie (The Usual Suspects) on Akeeva!

Sandborn Canal was another new anchorage for us. The charts are inaccurate, showing much shallower depths than we actually saw, and place the canal several hundred feet west of where it actually is. Based on our brief visit, Sandborn Canal is free of hazards and is a scenic, well-protected anchorage.

In the morning, we took the dinghies up to check out the narrows! Waterfalls poured down the mountainsides and into the bay. 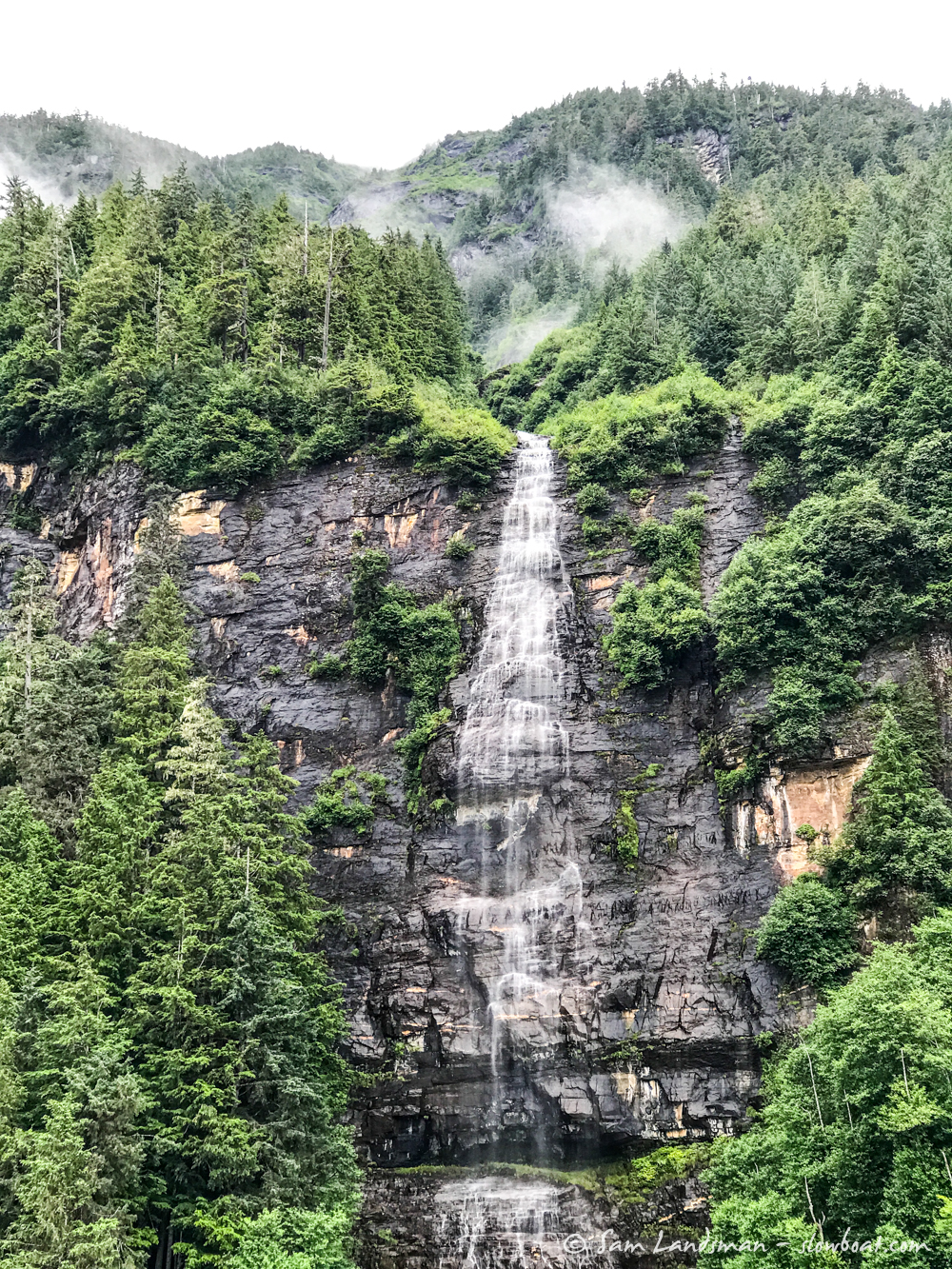 Sam took the left fork and got stuck on the bar briefly but was able to paddle across. 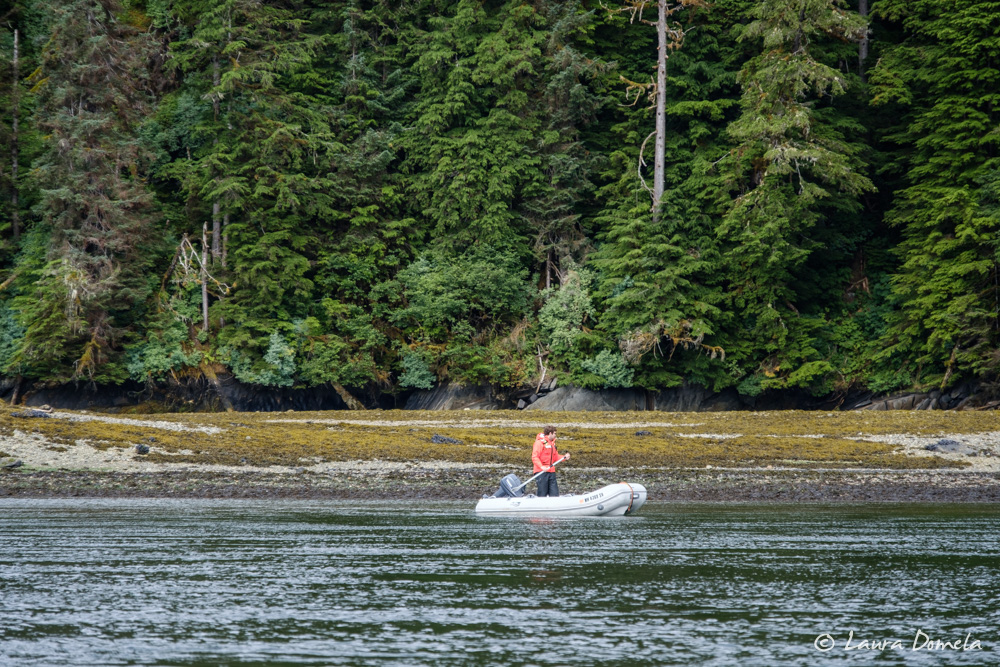 Once at the narrowest part, we had 4-5 knots against us as we went in (two hours after low tide just outside in Port Houghton) and some relatively choppy conditions. It was super fun! 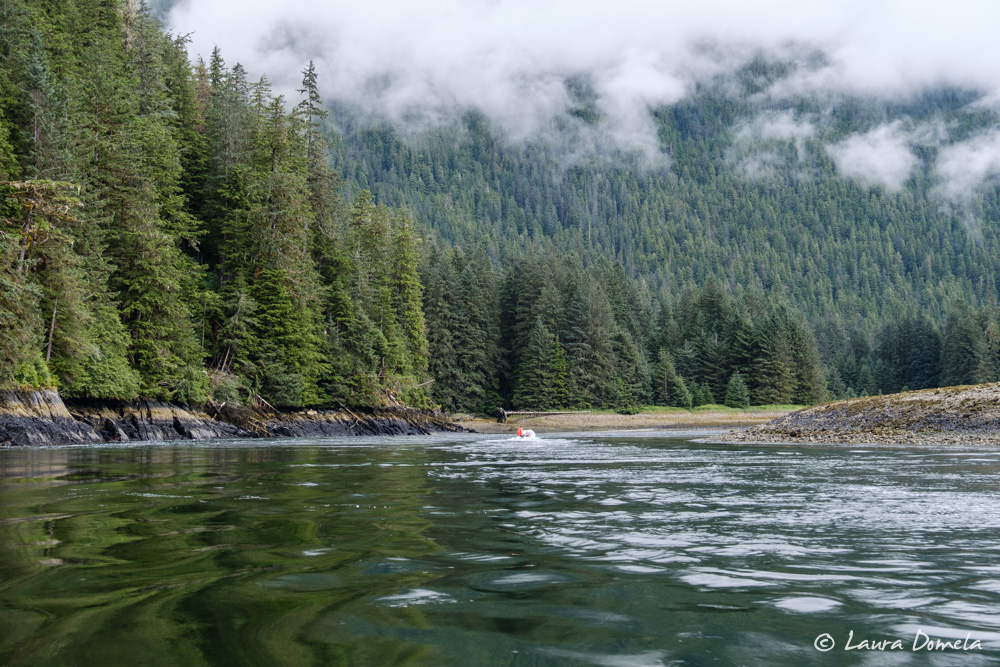 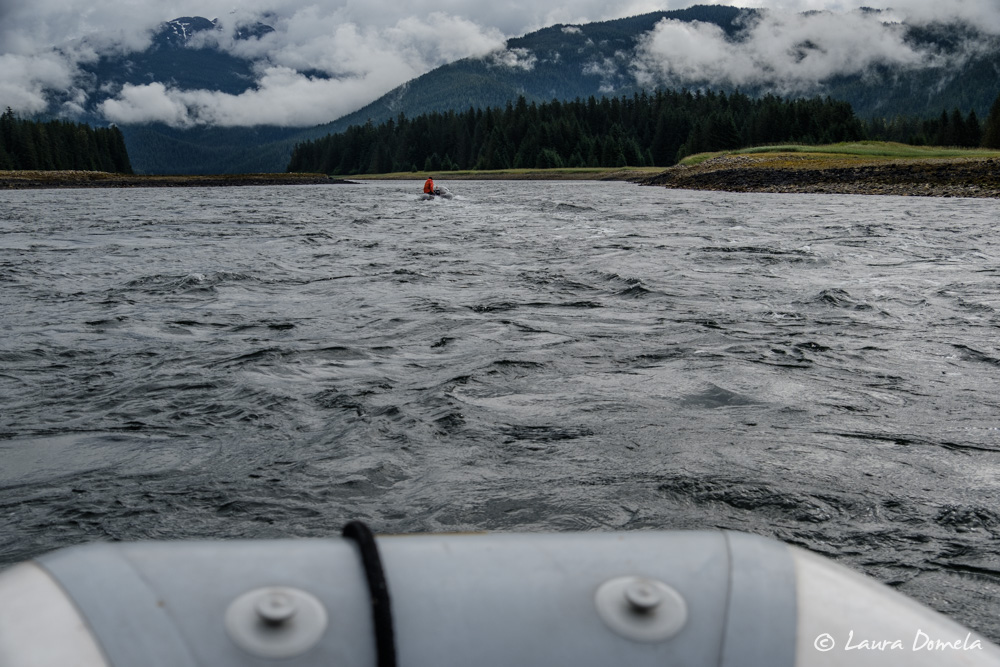 We covered about 22nm in the dinghies in an hour in a half. Fast dinghies open up a huge amount of territory to explore.

After our exploration, we pulled anchor and headed for Kake for water, a few groceries and fuel. Next up, we’ll continue around the outside of Kuiu Island for a few days! 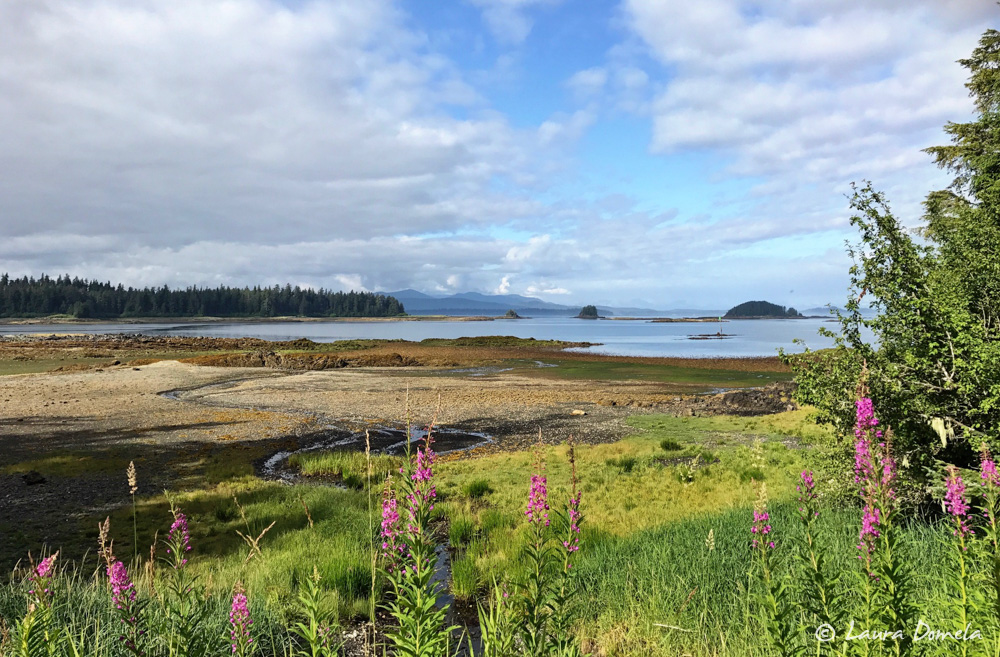 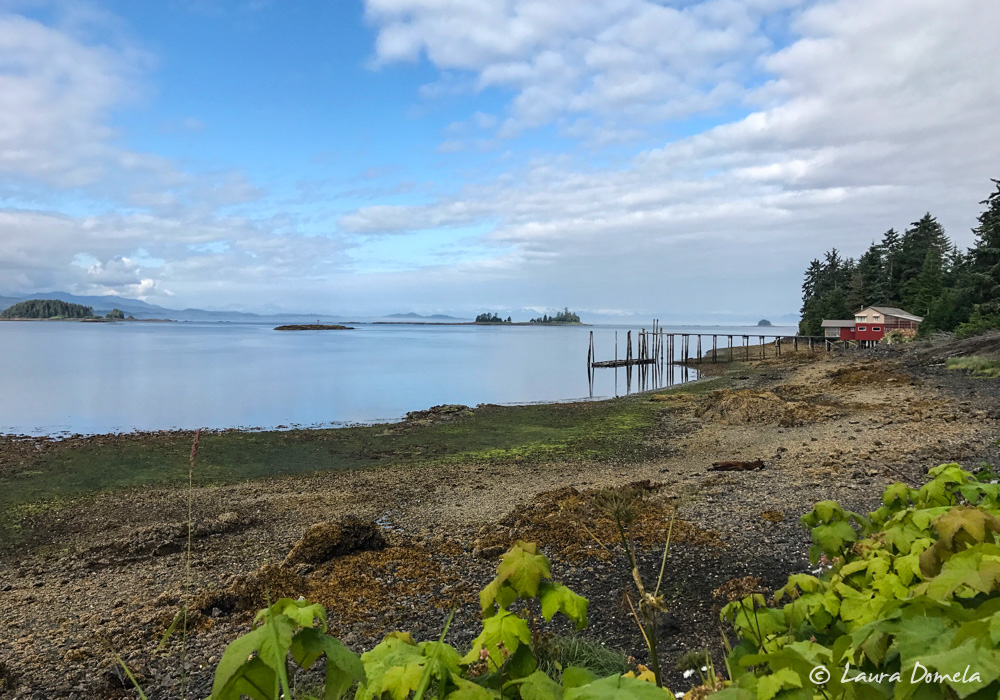