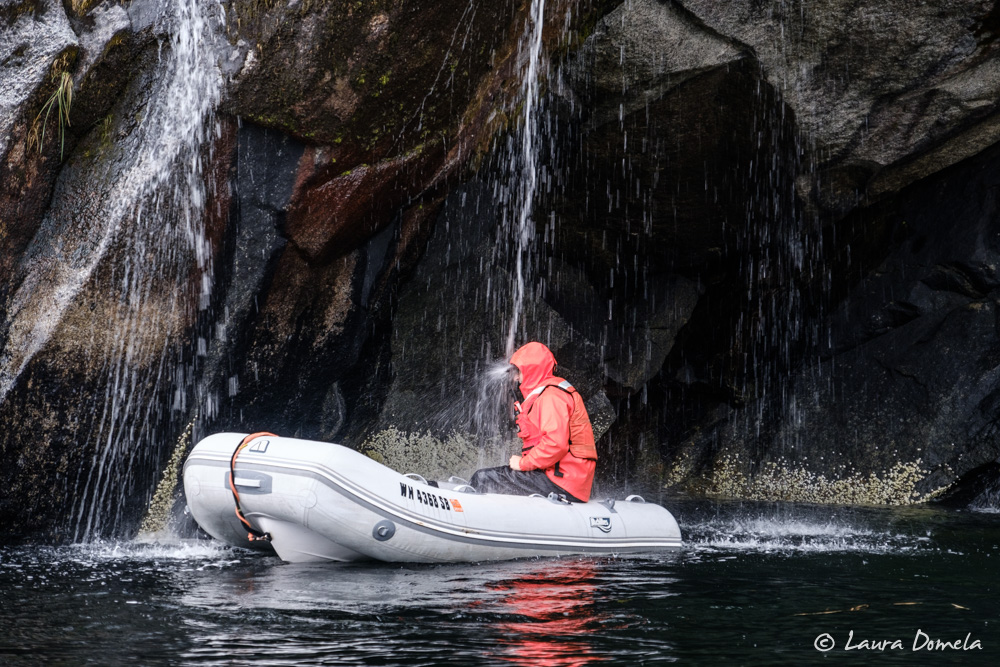 We left Thorne Bay and headed for Ketchikan to catch up on laundry, groceries, etc. and to pick up Kevin and Laura’s 9-year-old granddaughter, Mijonet, for a trip around Behm Canal.

The Ketchikan airport is across Tongass Narrows from town. Remember the infamous Bridge to Nowhere? Yep, that was here, and since it was never built, air travellers arriving or departing Ketchikan must take a boat a few hundred yards across the narrows. Most use a ferry, but there’s also a public dinghy/loading dock right at the airport. And boating to the airport is WAY more fun than going by car, especially since the dock is free from “no parking or waiting” announcements or cops telling you to move along. So as Safe Harbour headed for Naha Bay, Airship swung by the airport and picked up Mijonet.

The weather looked bumpy for leaving Ketchikan. NOAA was predicting 25-knot southerly winds. Getting around the south end of Revillagigedo Island in southerly weather typically isn’t fun (it’s open to Dixon Entrance), so we headed north. The plan worked perfectly, and we enjoyed smooth water all the way to Naha Bay.

We tied to the public float near the entrance to Roosevelt Lagoon and the nearby (tiny) community of Loring. 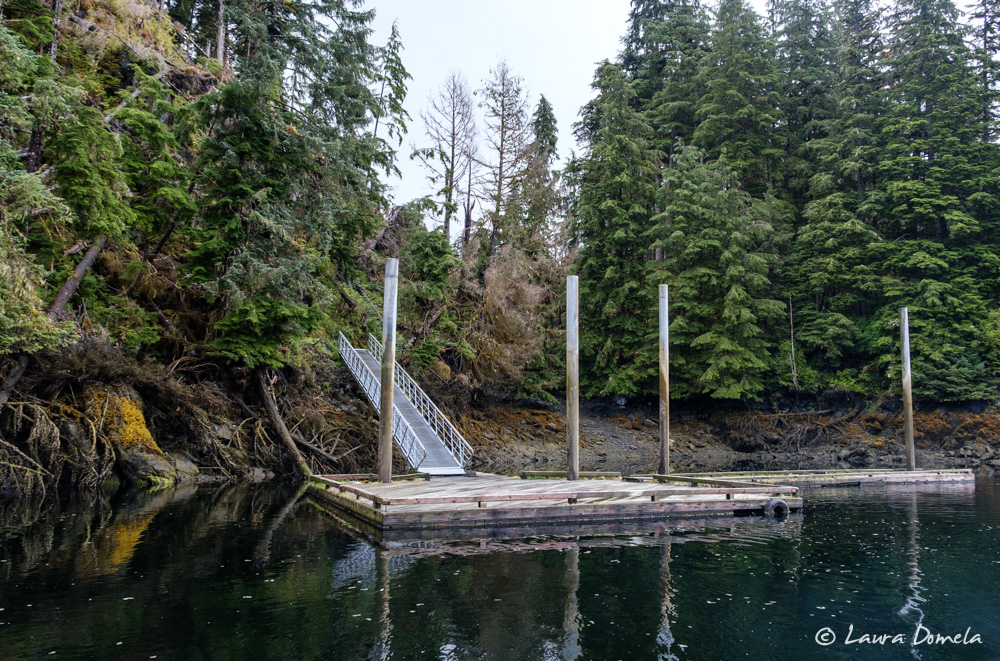 This float is in great condition and allows easy access to trails. It’s just around the corner from Naha Rapids which lead into (or out of) Roosevelt Lagoon. 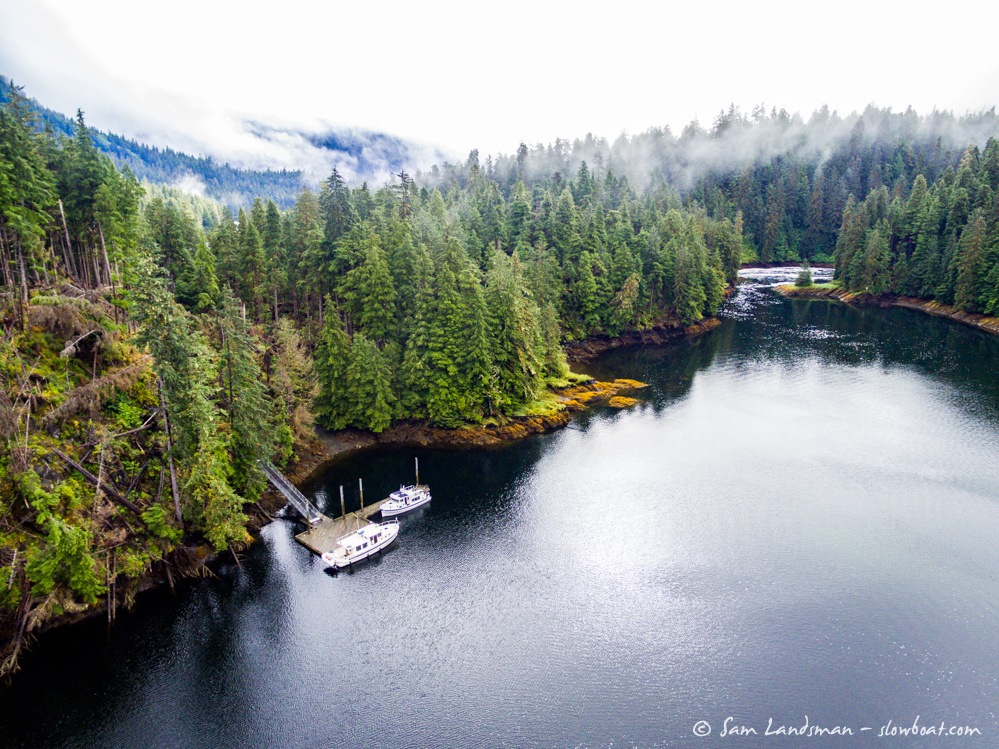 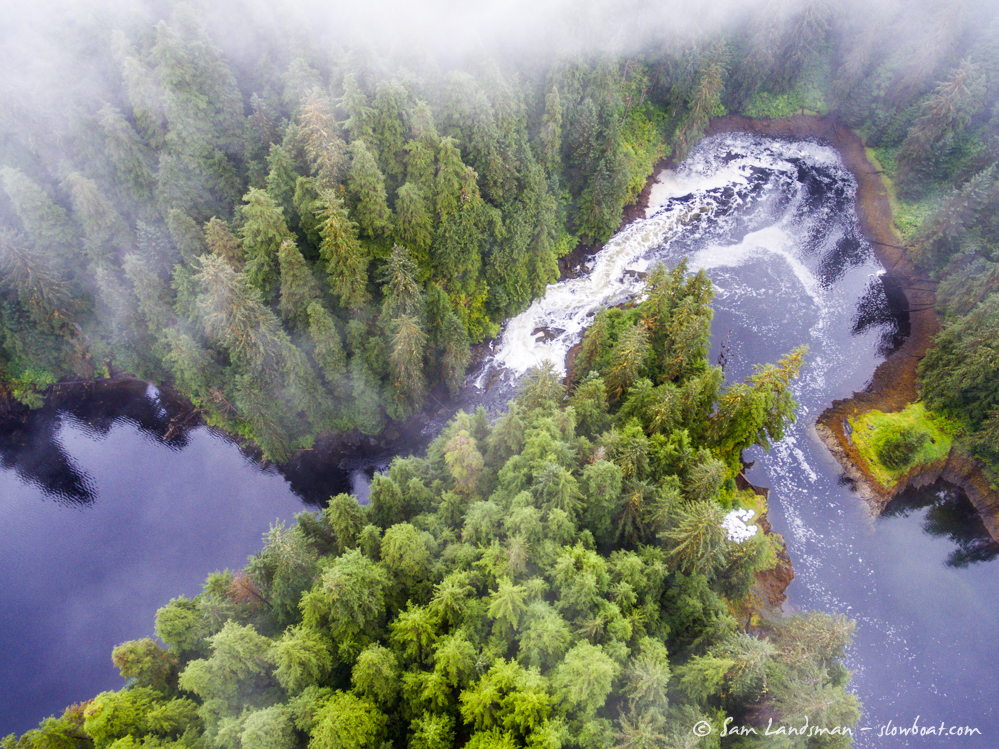 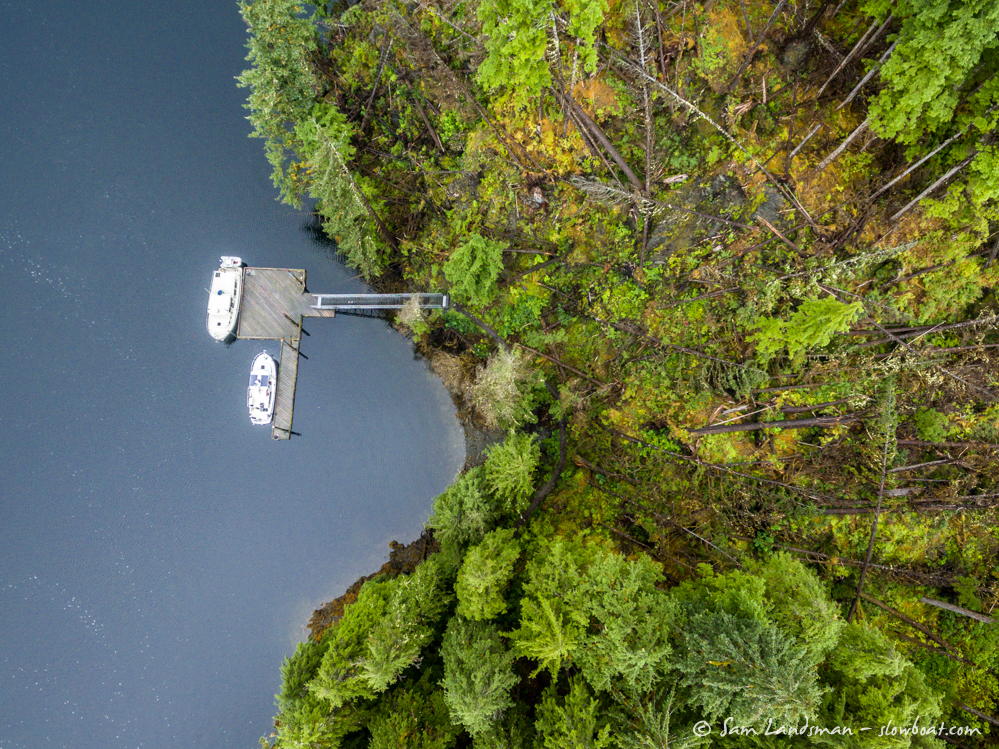 We took the dinghies out with visions of going through the narrows to explore Roosevelt Lagoon. But as we looked into the rapids, we saw…well, lots of rapids. More concerning, the water inside was visually much lower than the water outside. Not being able to see the rapids more fully, we turned back to explore the nearby community of Loring, figuring we’d check back later on the conditions at the rapids.

According to the 2010 census, Loring has a population of 4, but in the summer months that can swell to 50. It’s a quaint village with buildings connected by boardwalks and a cannery/history museum that had an open sign out but was actually closed. Other than the museum, there’s nothing for visitors. 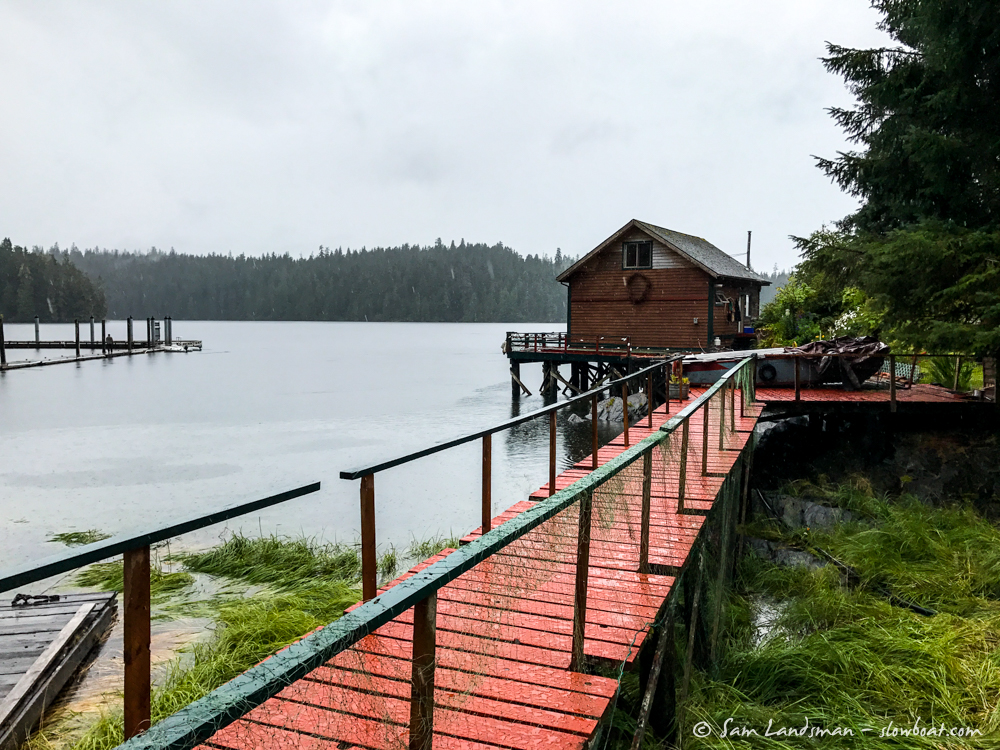 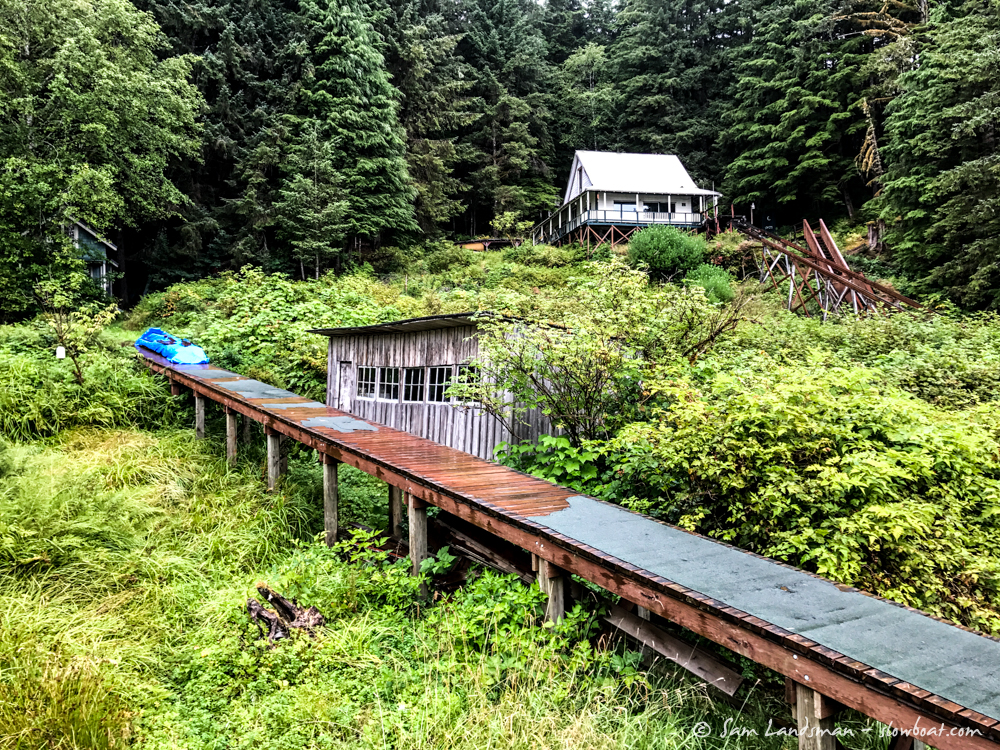 Back at the rapids, not much change. We pulled the dinghies up to a cool little portage and walked the trail over to the lagoon to get a closer look. 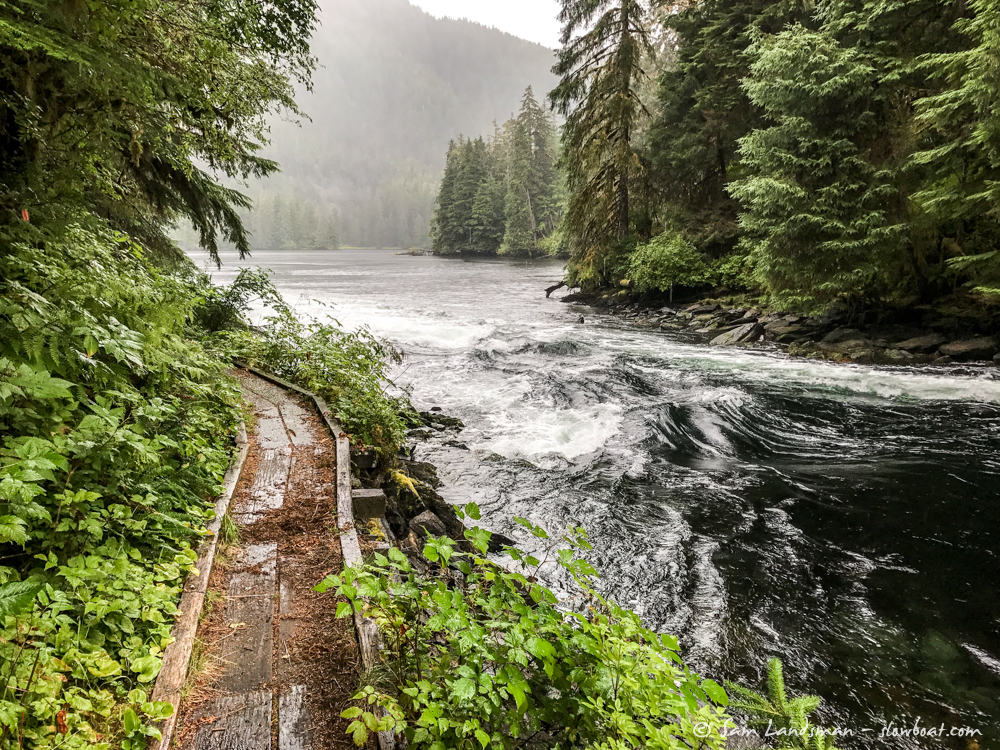 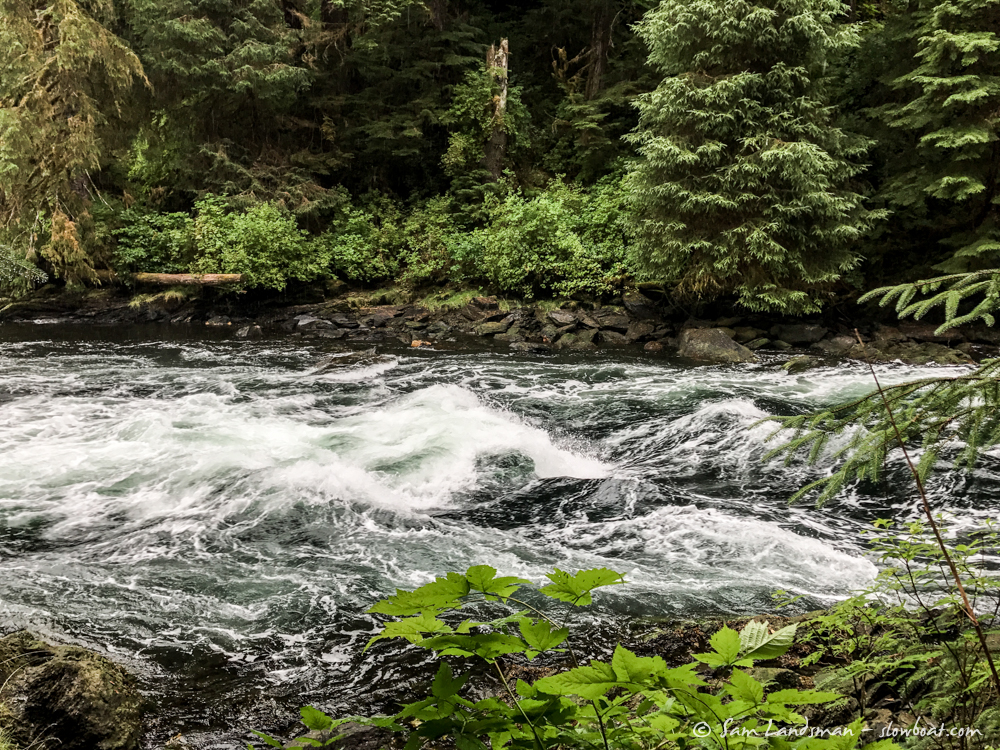 So, no exploring Roosevelt Lagoon for us. We tried again in the morning closer to the time of slack at Loring, but the rapids were still running too fast. These are serious rapids, probably easily capable of capsizing a dinghy and drowning a human. Explore cautiously!

The sunshine from a few days ago is long gone. As we made pizza for dinner, rain poured down. Torrential, two-inch-an-hour rain.

The next morning, Kevin and Mijonet went out for some fishing. Mijonet caught her first fish, a big pink salmon, which they threw back in. With the fishing complete, we continued north and then east in Behm Canal to Fitzgibbon Cove. 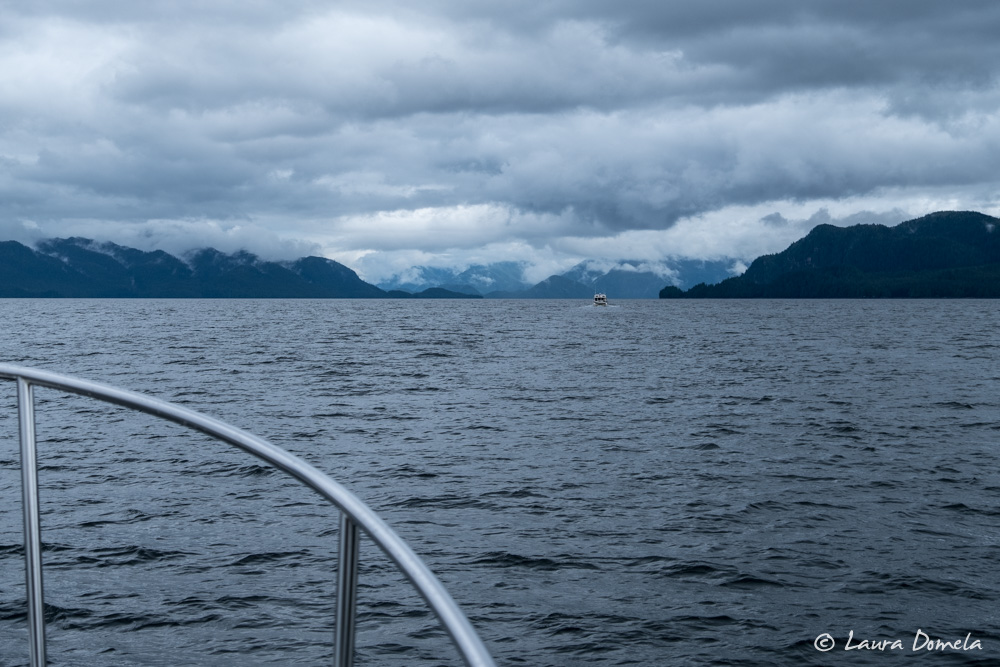 It was still raining pretty heavily and it was windy. Fitzgibbon Cove is somewhat open to the south, and 1-2 foot chop rolled through the anchorage, but nothing nearby looked better. We put out some crab traps, made dinner, took no photos. In the morning after a bumpy night, we pulled up one big male Dungeness (just enough to make crab mac-n-cheese for dinner) and then cruised to Walker Cove in Misty Fjords.

Walker Cove is one of our favorite anchorages in Alaska. It’s breathtakingly beautiful, with dozens of waterfalls, sheer granite walls, and meadows (often) teeming with wildlife. And compared to Punchbowl Cove, further south, Walker Cove is much less crowded and at least as beautiful. Even on this gray, misty day, it was clear enough to have a great view of the scenery. 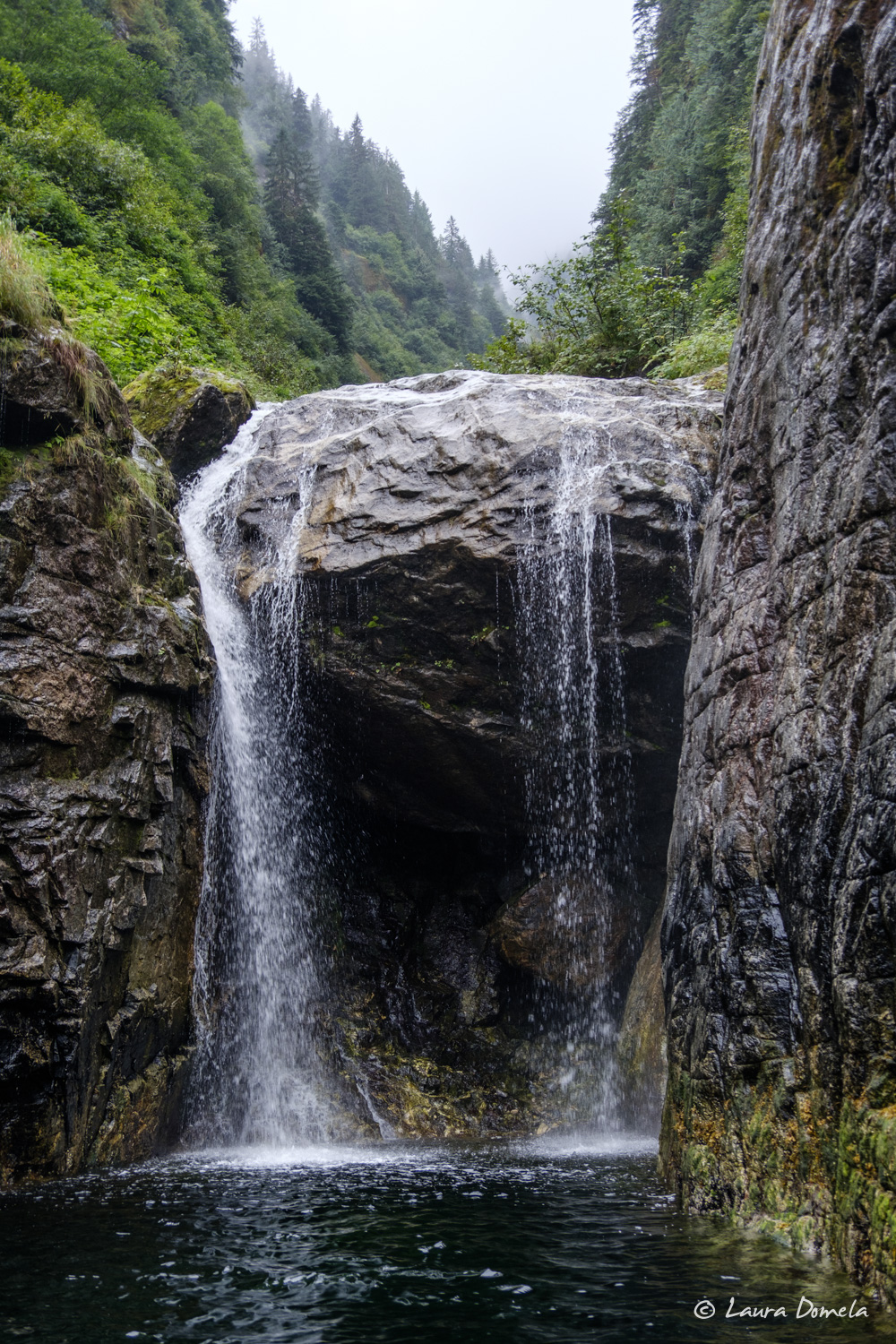 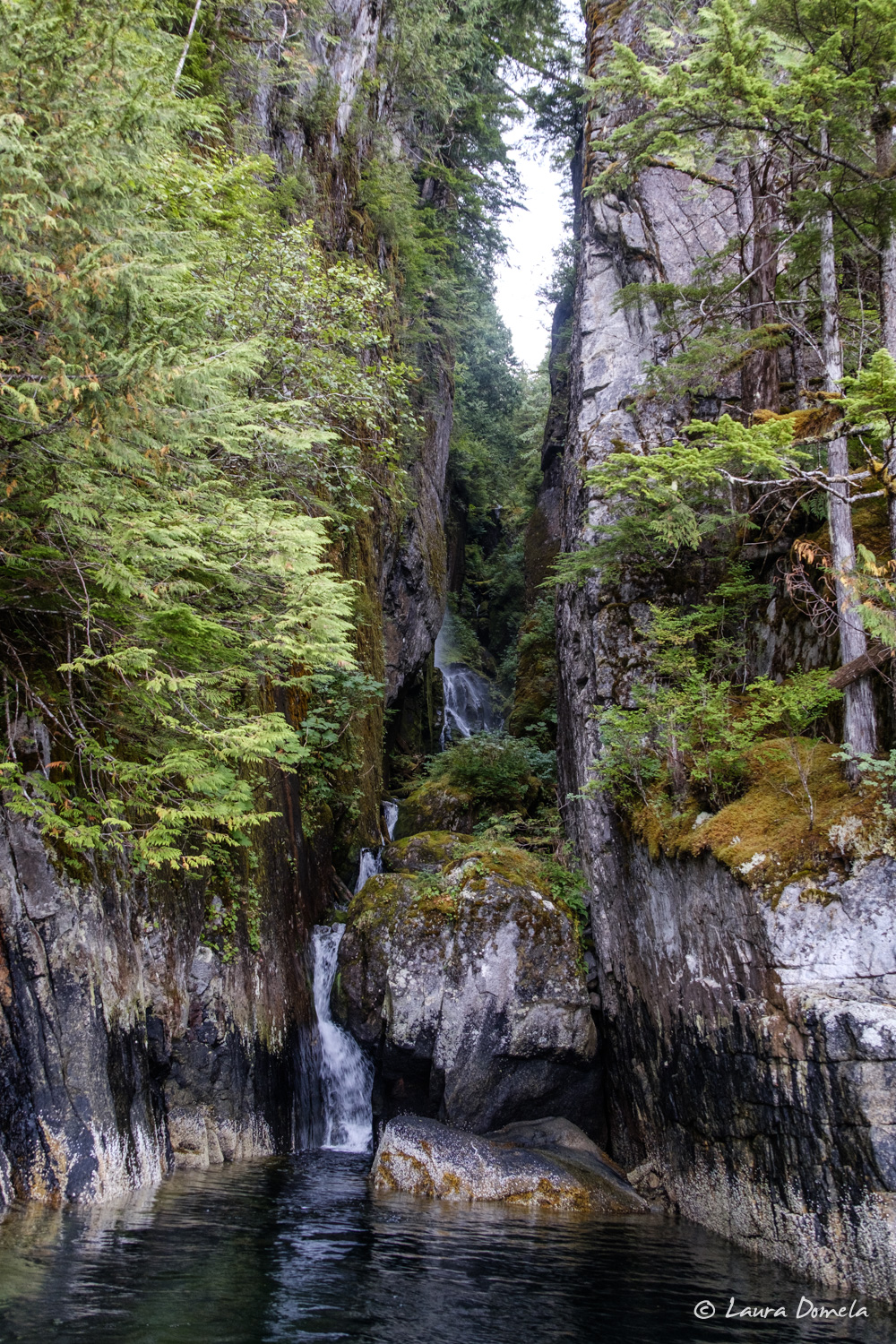 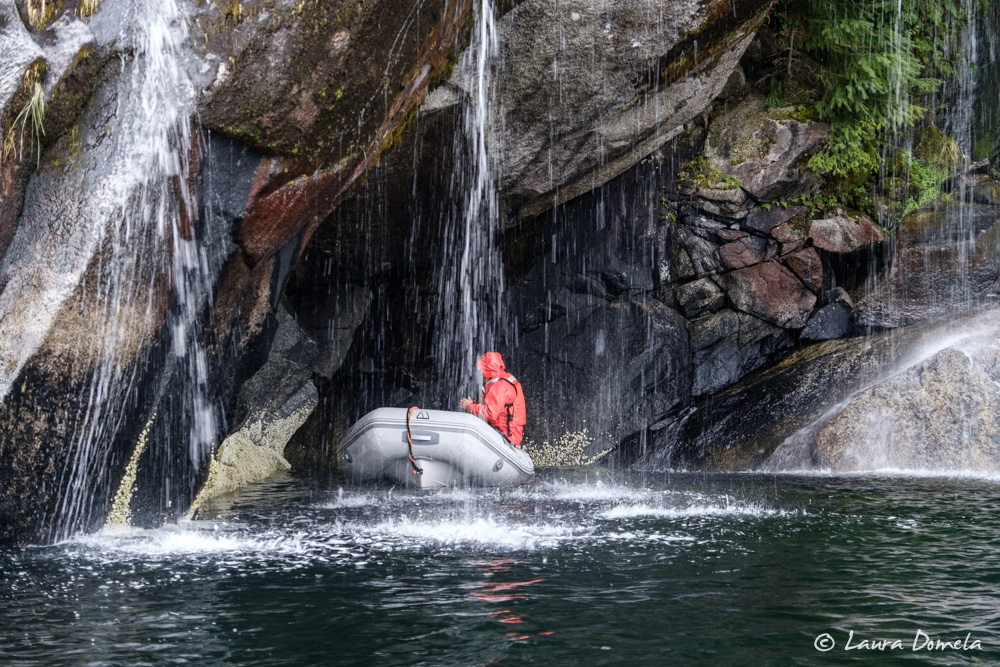 We returned to the boats and dinghied up the river a bit. Last year we saw eight brown bears at the same time on shore in Walker Cove, but so far this visit — no bears. We thought perhaps they might be feasting on salmon a little further upstream, but still we saw only eagles. We beached on a sandbar and walked around a little, stepping around some bear paw and eagle talon prints in the sand. 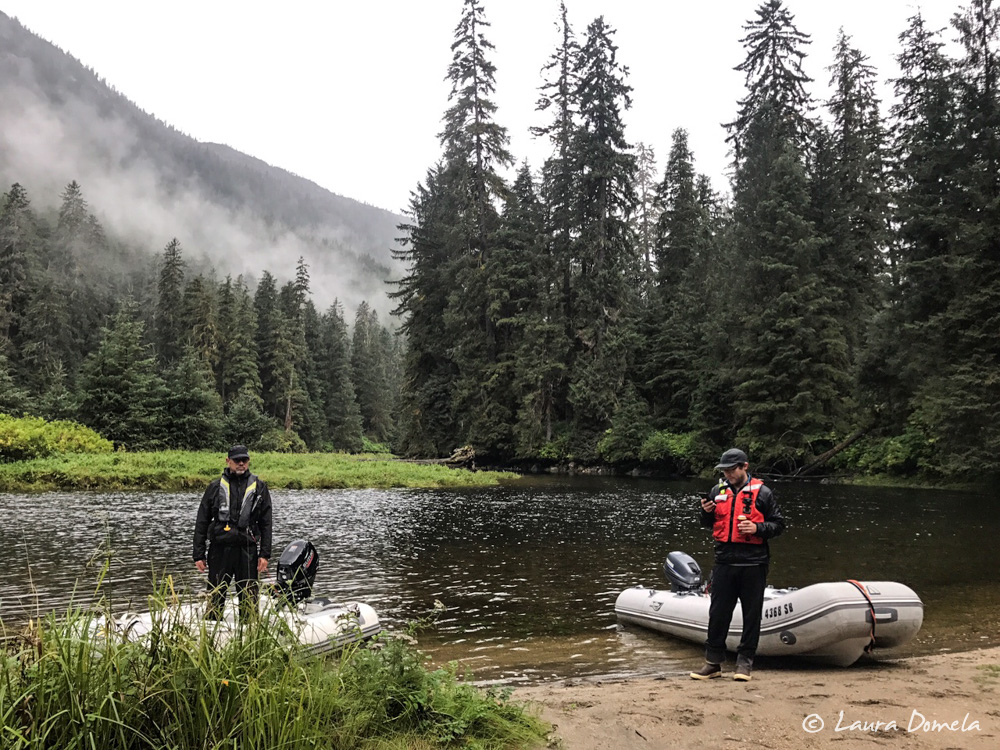 In the morning before leaving, we pulled the crab traps up and had three big male Dungies that were keepers. (Crab cakes for dinner, crab/eggs benedict for breakfast the next day, and some crab dip another night!)

We left Walker Bay with the idea that we’d anchor for the night at Winstanley Island/Shoalwater Pass, about 20nm (3 hours) away. The forecast was for 25-knot southeasterlies, but as we motored south conditions were perfectly calm. Wanting to take advantage of the calm conditions, we passed Shoalwater Pass and kept going, thinking we might have an easy trip around Point Alava. We didn’t. The wind and seas built to 25+ knots and 3-4 feet. The autopilots got a workout and a few things went flying.

We ended up in Ice House Cove, just south of Carroll Point, tied to a huge mooring buoy. Ice House Cove turned out to be a sweet little anchorage. It’s better protected than it appears on the chart, and it’s fun to watch the traffic coming and going from Ketchikan. There are some trails here too, we hear, but the weather was still super rainy so we didn’t go out and explore at all, nor did we manage to get any photos, but we’d definitely return to this anchorage. It’s close enough (8 miles) to Ketchikan but a great alternative when you don’t feel like being in town.

Once back in Ketchikan, Sam left for a quick trip to Seattle, and Kevin and Laura did a few touristy things with Mijonet. We had one (and a half) nice days of weather and managed to get out to Totem Bight State Park with just a bit of drizzle. 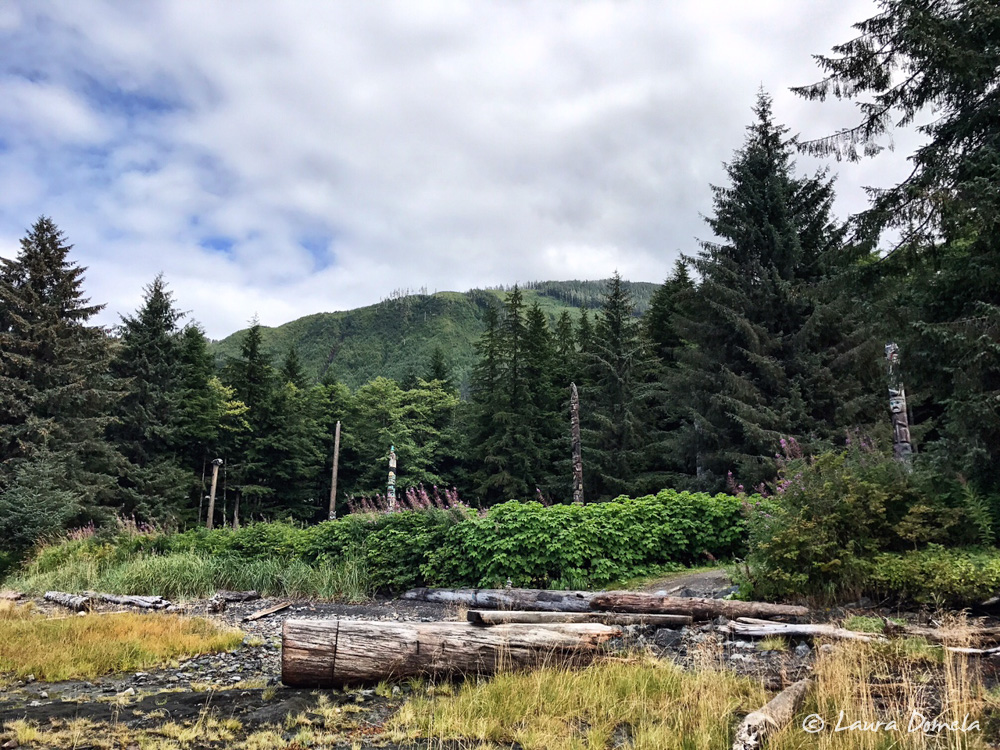 The weather cooperated and Mijonet got to return to the airport via dinghy shuttle — the best kind of shuttle! From Airship (moored at the city float downtown) to the small vessel dock across Tongass Narrows it’s about 2.5 nautical miles, which is no big deal at all in settled weather (just watch for float planes!) 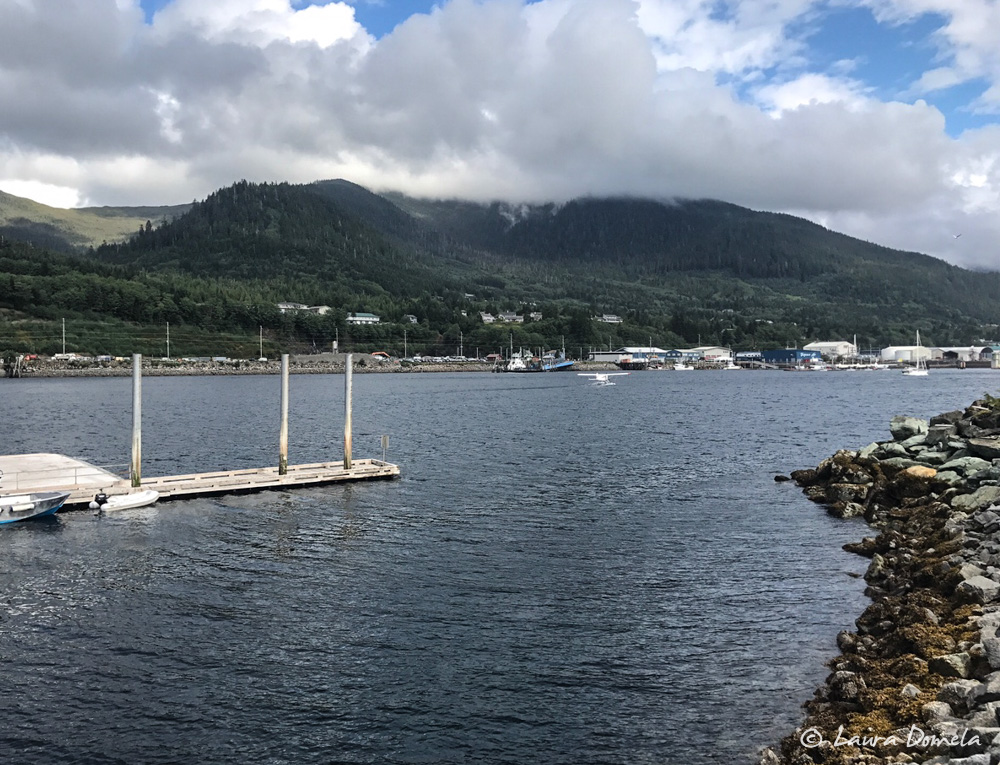 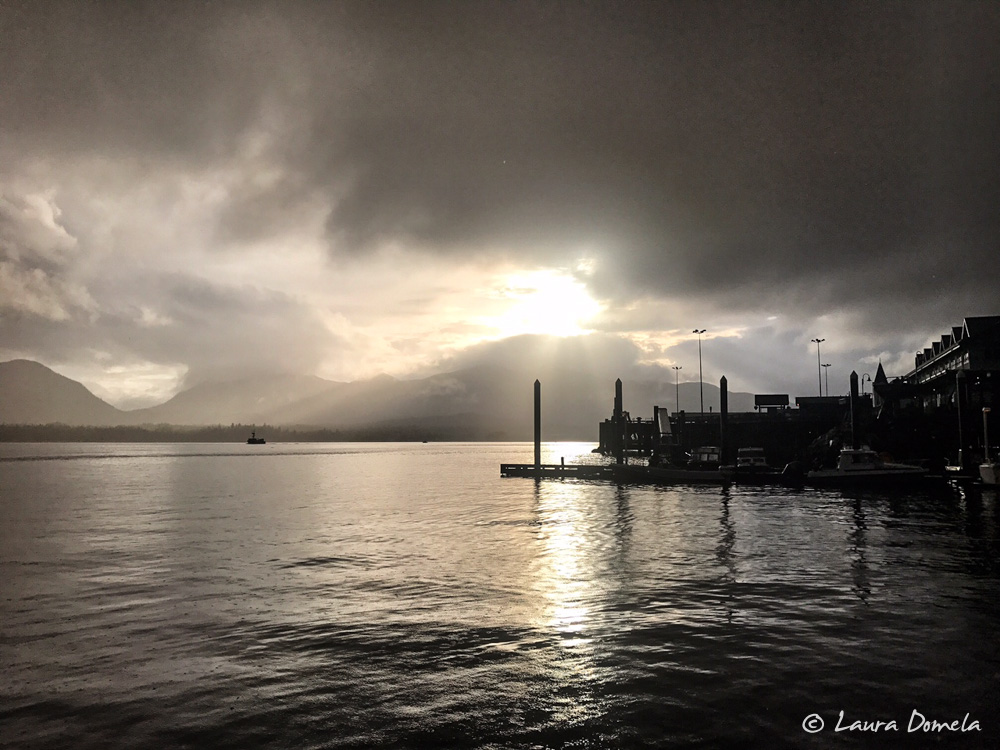 The weather was okay for a day or so, but the last few days in Ketchikan have been dreadfully gray and rainy. We’re all fueled up and ready to go, so as long as the weather cooperates in the morning, our plan is to leave around 5:00 a.m.  We should have enough of a weather window tomorrow to get across Dixon and into Prince Rupert without too much fuss — 84nm…long day!