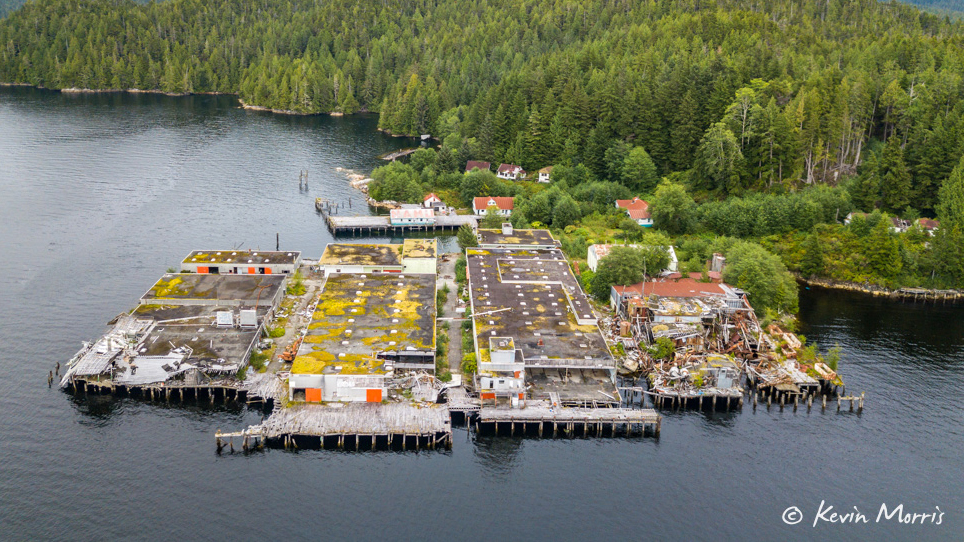 We left Kynumpt Harbour and cruised four nautical miles to Shearwater, where we tied up for a couple hours to do laundry, grocery shopping, and top off the fuel tanks. The grocery store was closed for restocking until 1:00 p.m. (Our lucky day! Fresh produce!) so we took advantage of the new laundry drop-and-fold service ($20 Canadian per load) while we had a late breakfast.

With chores done, we headed for Rock Inlet, an anchorage behind the abandoned former cannery of Namu, on the mainland shore of the Inside Passage, across from Hunter Island and about 25nm south of Shearwater.

Namu was once a thriving cannery and fish processing facility. BC Packers employed up to 400 people on the site, beginning in 1928 and ending in the late 1980s. In the 1990s, due to declining fish stocks and improved refrigeration on fish boats, BC Packers sold the facility to a developer who hoped to build a sportfishing resort. The development never happened.

Via Wikipedia: “In its early iteration the cannery at Namu employed a race-based policy of labour; with groups of First Nations, Japanese, Chinese and “Whites” – and was for a time racially and sexually segregated, including but not limited to whites-only bathrooms and the management positions being reserved for Caucasian men.

Initially one of many independent canneries founded on the Central Coast, Namu was acquired by BC Packers who consolidated their operations in the 1950s by closing many smaller outlying canneries and consolidating them into three main bases; Steveston, Namu, and Prince Rupert.”

[No wonder this place felt so creepy!]

“The site of Namu is one of the oldest known sites on the British Columbia coast. Marine hunters lived here 10,000-5800 BCE. Evidence from archaeological analysis from the early period at Namu indicate the full establishment of a broad-based marine economy as early as 4000BC.”

We first visited Namu six years ago. At the time, caretakers Pete and Rene Darwin were operating the facility as a basic marina for visiting boaters. They had good floating docks with a ramp ashore, and it seemed they were working hard to keep the elements at bay. Many buildings were collapsing, but the main piers were relatively safe. The store had been preserved, with much of the stock still on the shelves from when BC Packers walked away from the facility.

Three years ago we visited again. Pete and Rene were gone, having moved their floating home and marina to nearby Lizzie Cove. Without their presence and upkeep, vandals accelerated what nature was already accomplishing. Windows were shattered. The store was ransacked. A hulking, derelict ship sat listing, tied to a collapsing pier. Ceilings were caved in. Nature was slowly clawing back Namu.

This year Namu appeared even worse. Tin roofing, once emblazoned with NAMU in bright block lettering, now peels back in a light breeze. Ceilings droop and panels lie in piles on the floor. Roofs are collapsing. Almost every window is shattered. 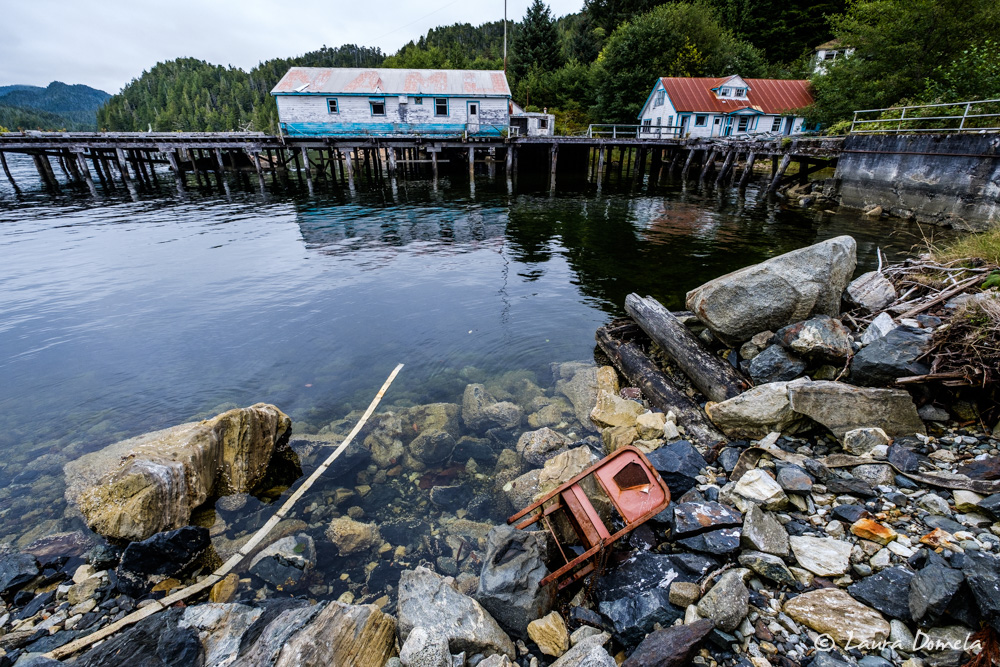 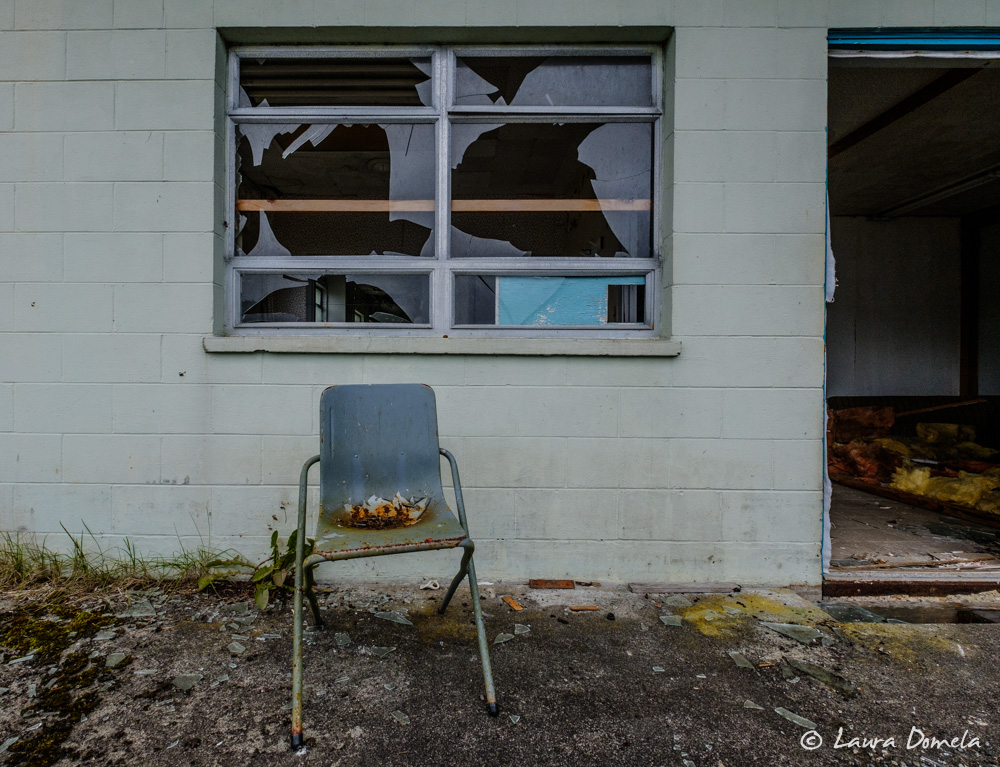 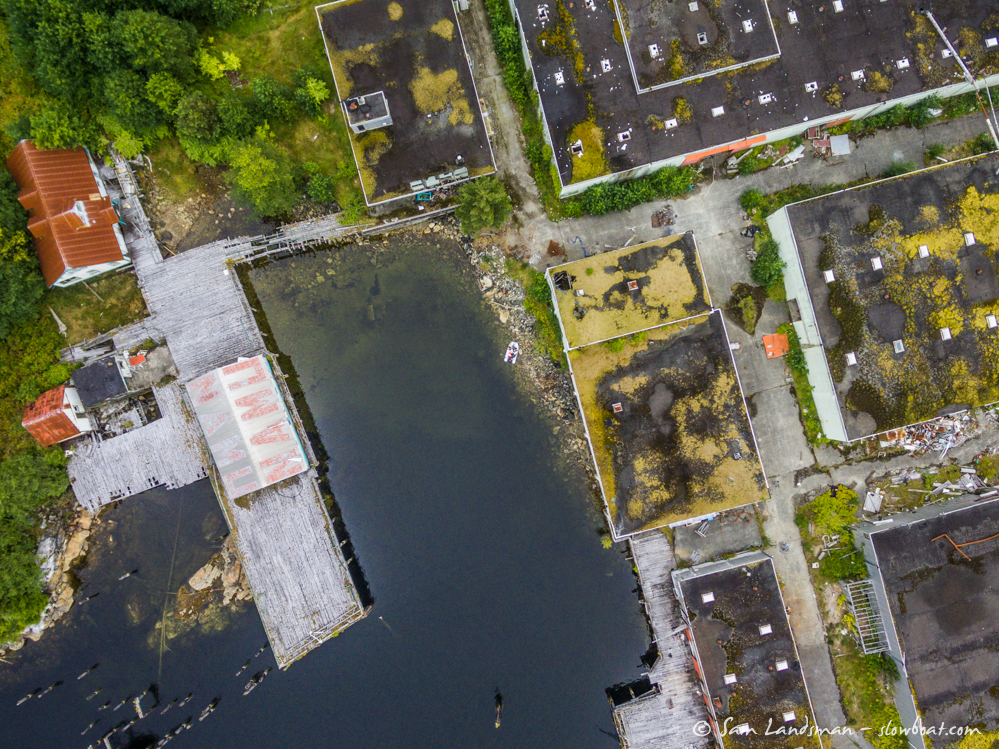 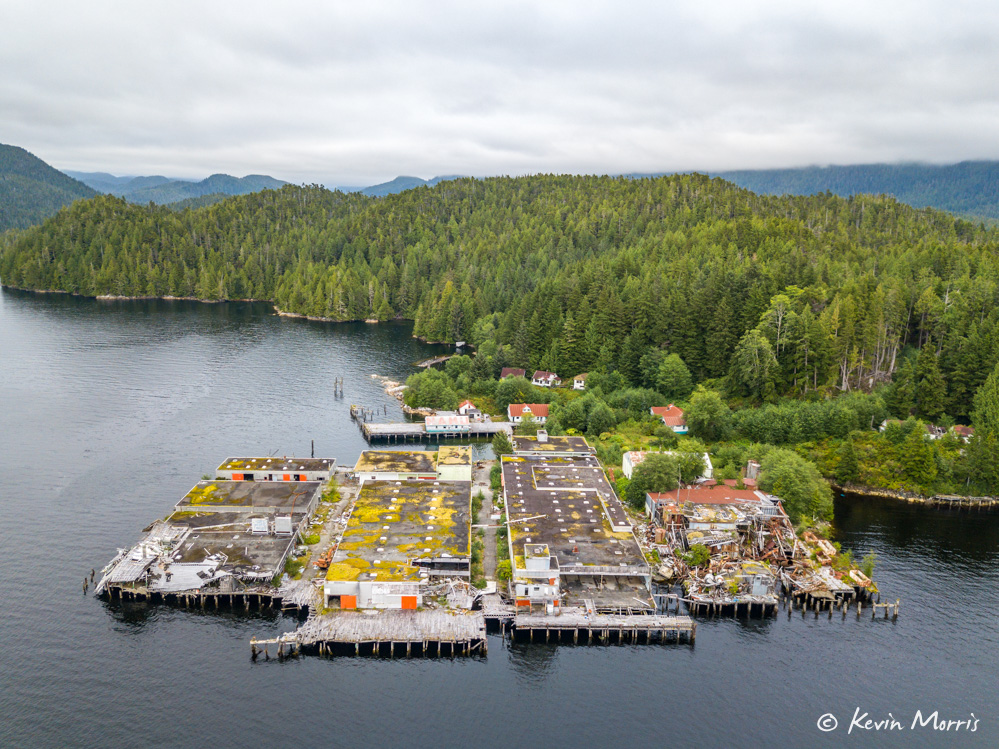 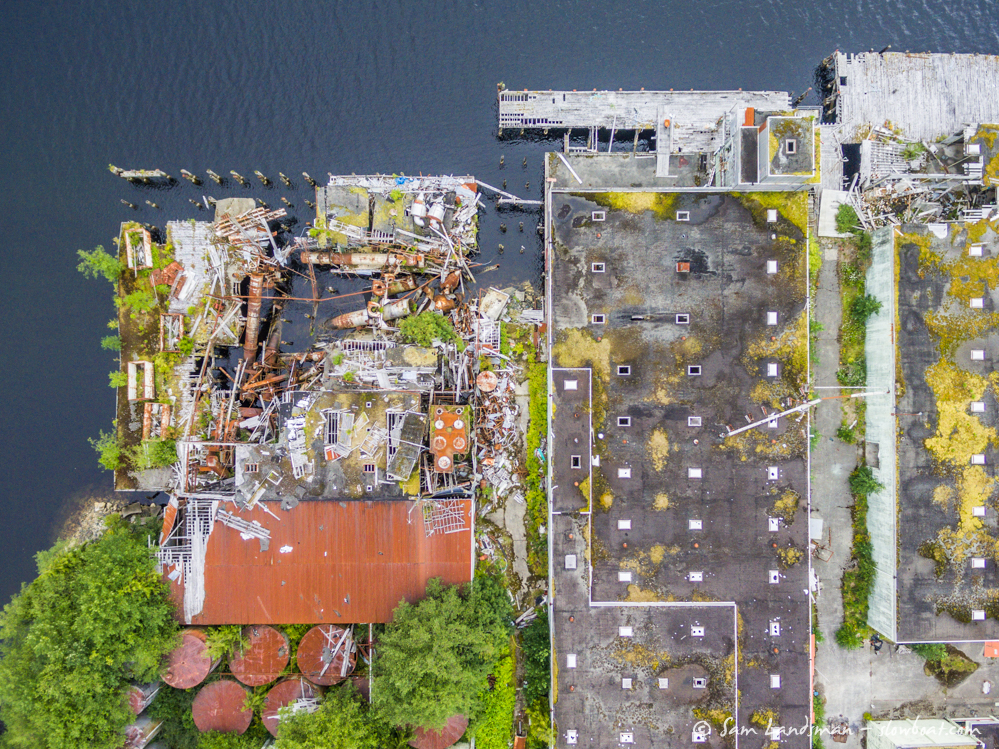 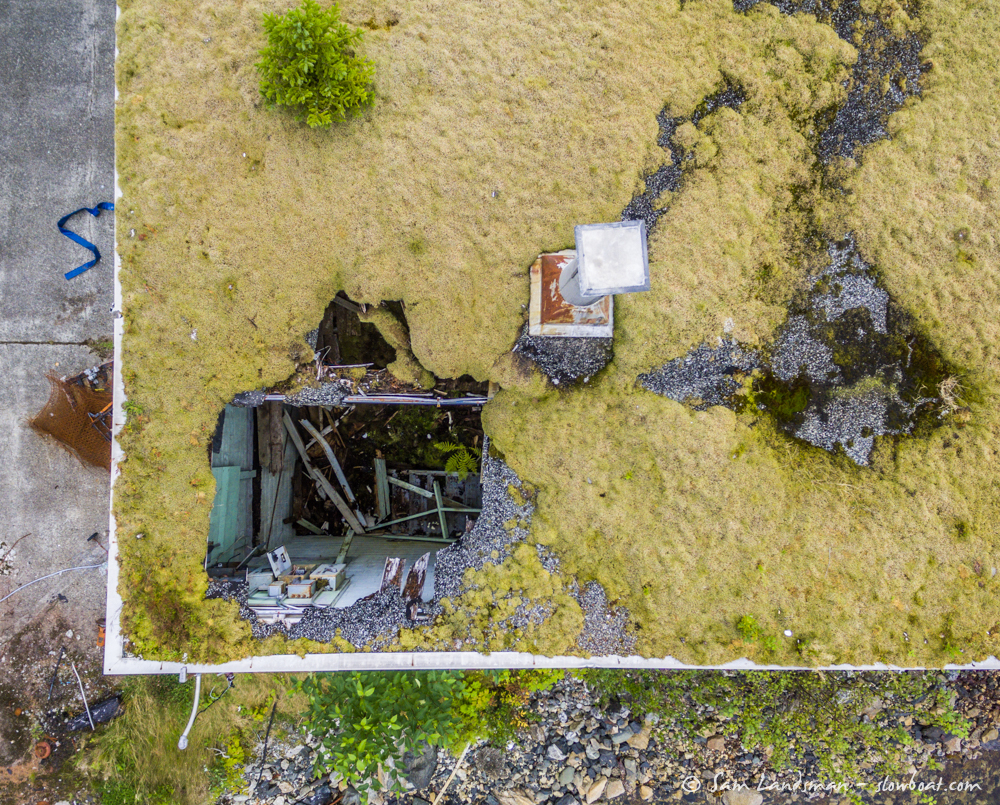 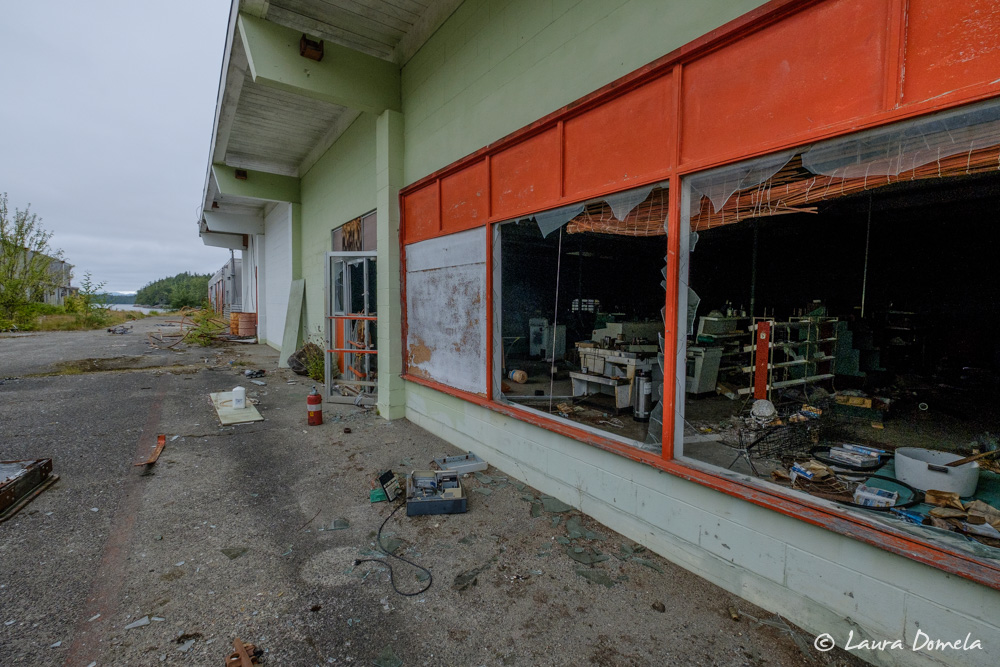 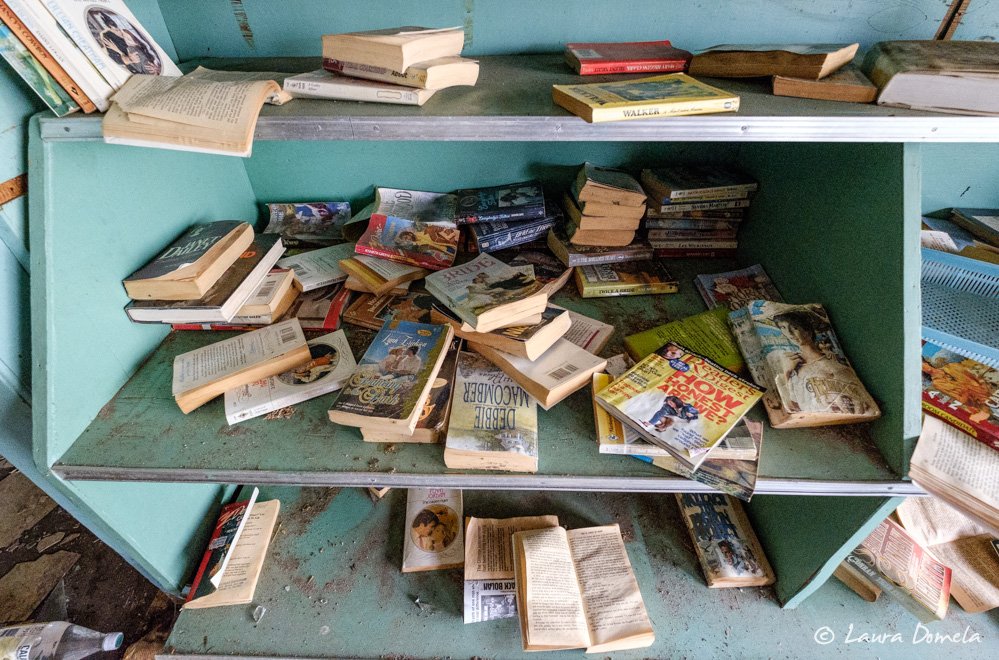 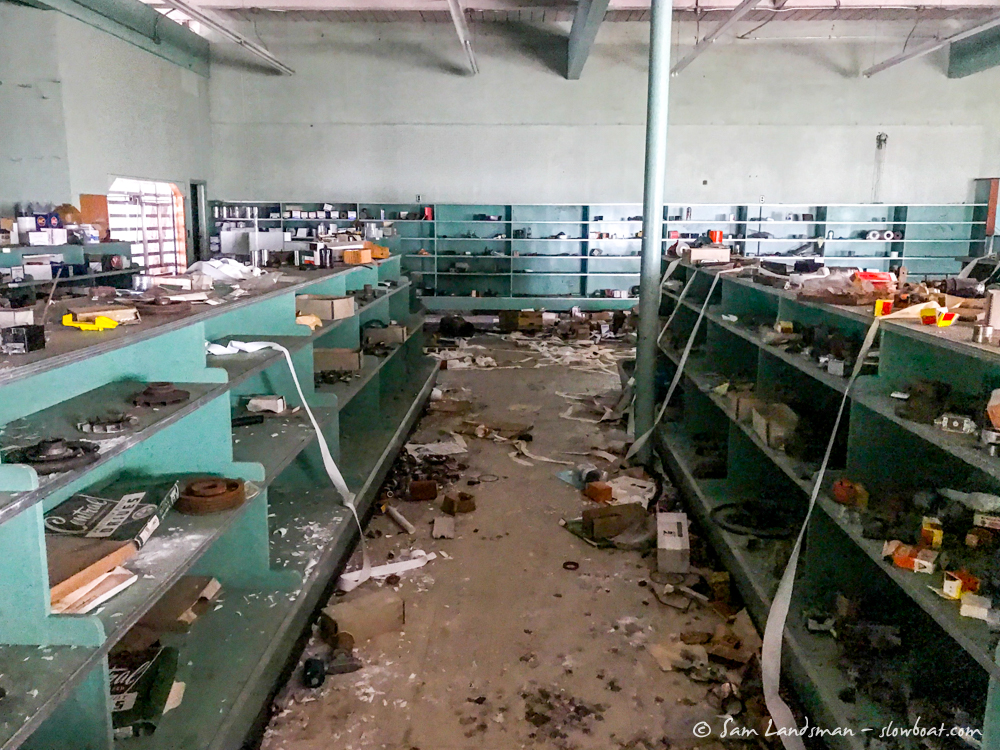 The old powerhouse is particularly haunting. Gray cinderblock walls, dulled by decades of soot and weather, shroud a series of pipes dangling from the ceiling. Fifty-five gallon drums of oil leak onto the floor. Long disused circuit breakers occupy one corner, much of their cabling gone. The office sits near the middle, windows broken, paint peeling off the door. It looks like the scene from a spy movie showing an abandoned Soviet-era nuclear weapons facility. 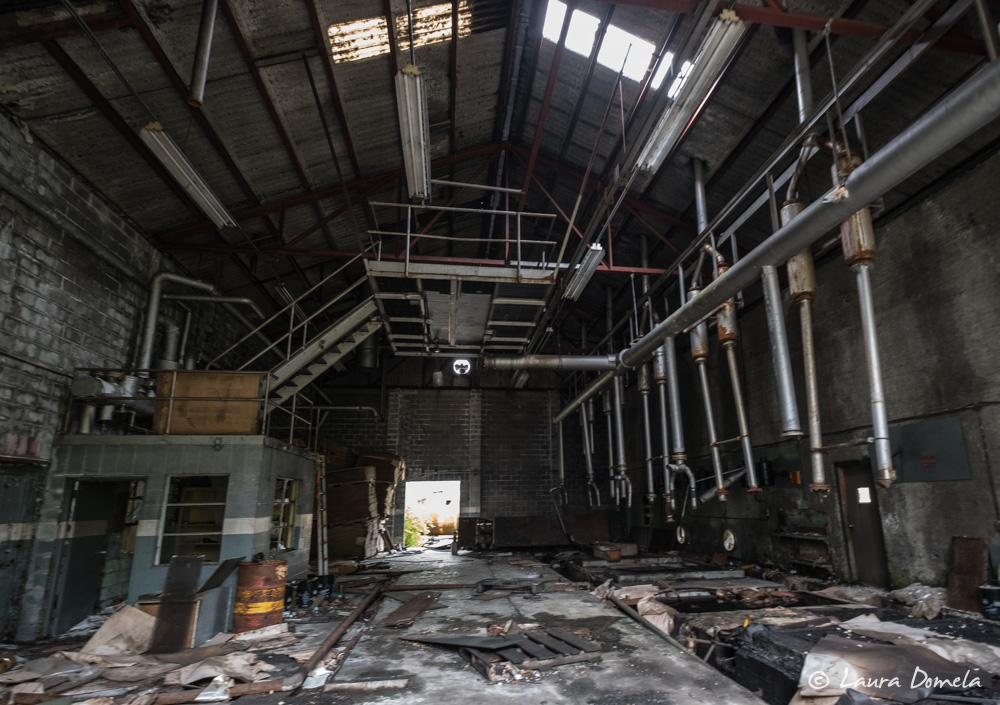 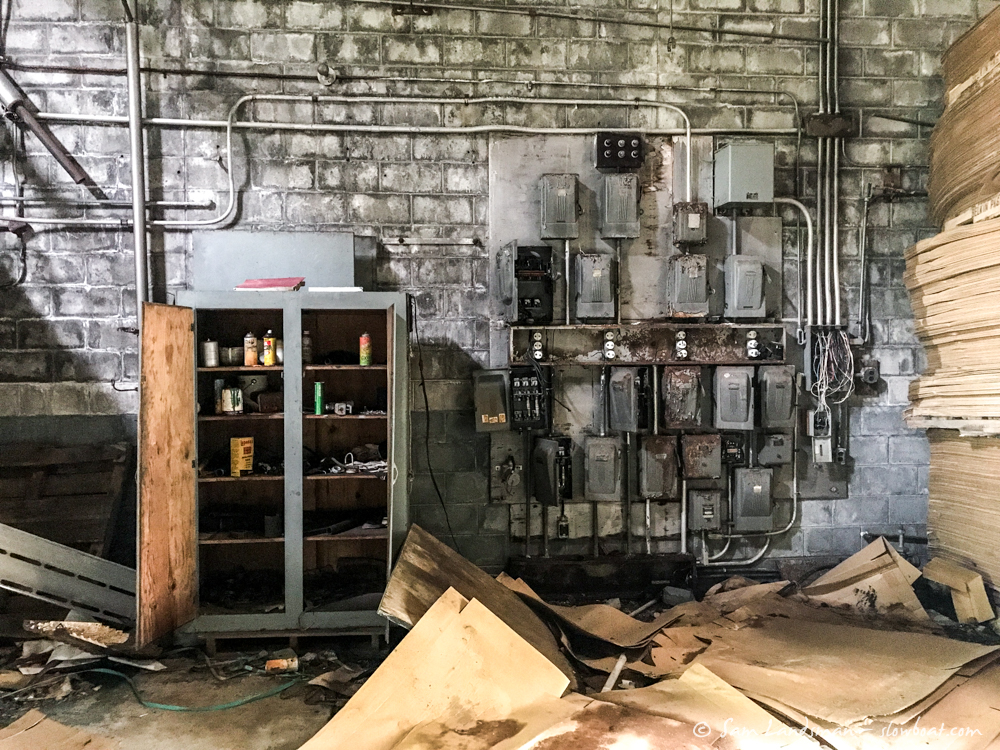 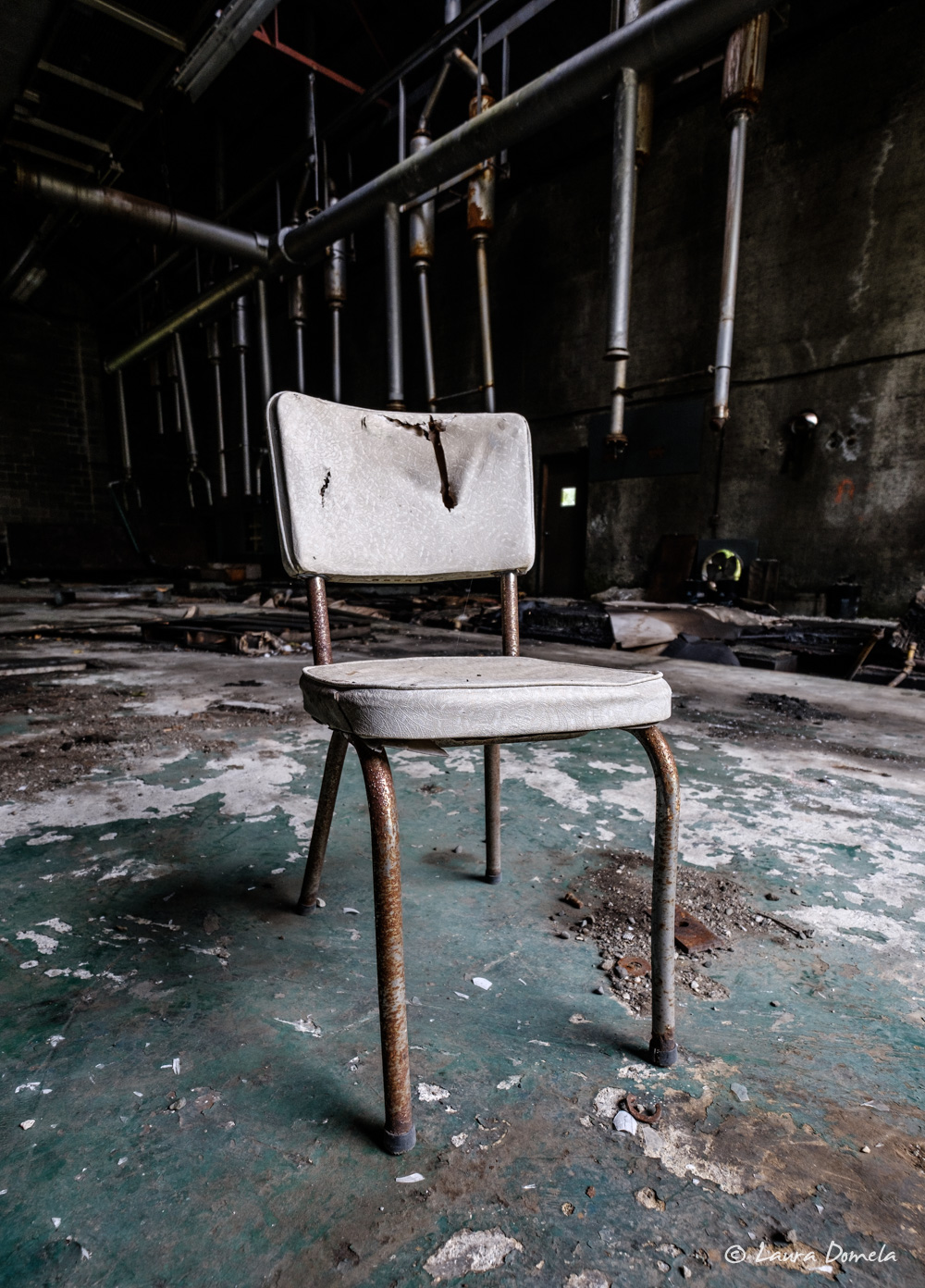 The derelict ship that was here three years ago is gone (sank?), as is much of the pier it was tied to. The huge nearby buildings appear to be slowly settling towards the sea. 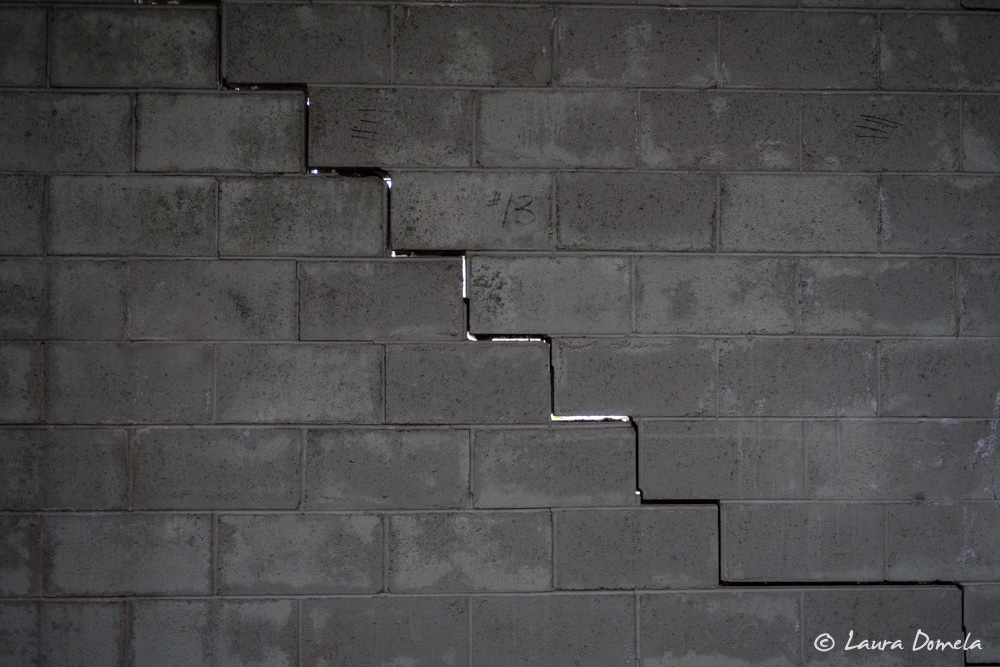 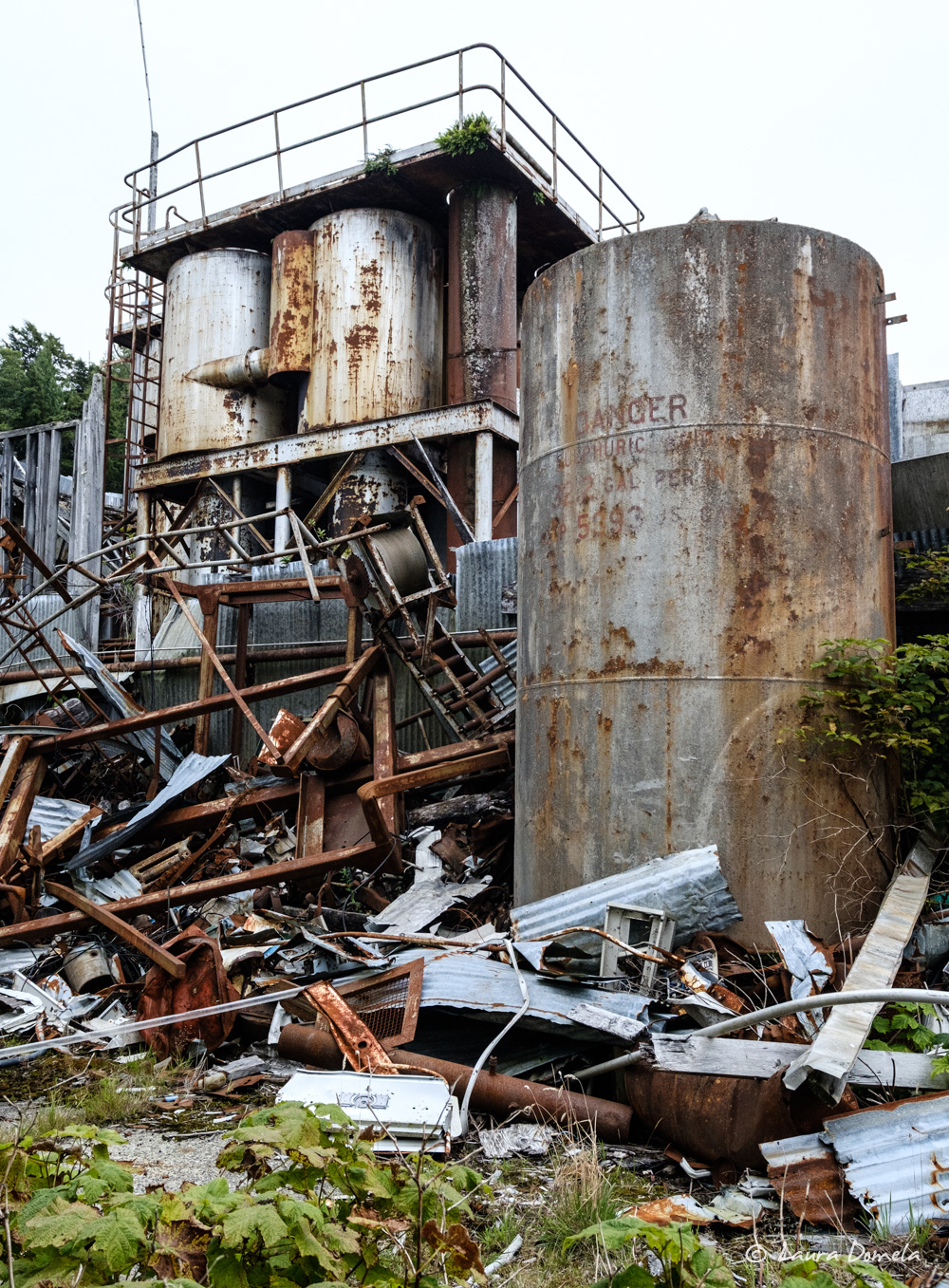 Nearby, hundreds of rusting, empty cans labeled “frozen shrimp meat” sit atop rotting pallets. A huge pile of empty alcohol containers (one of many piles we noticed throughout the facility) sits nearby. 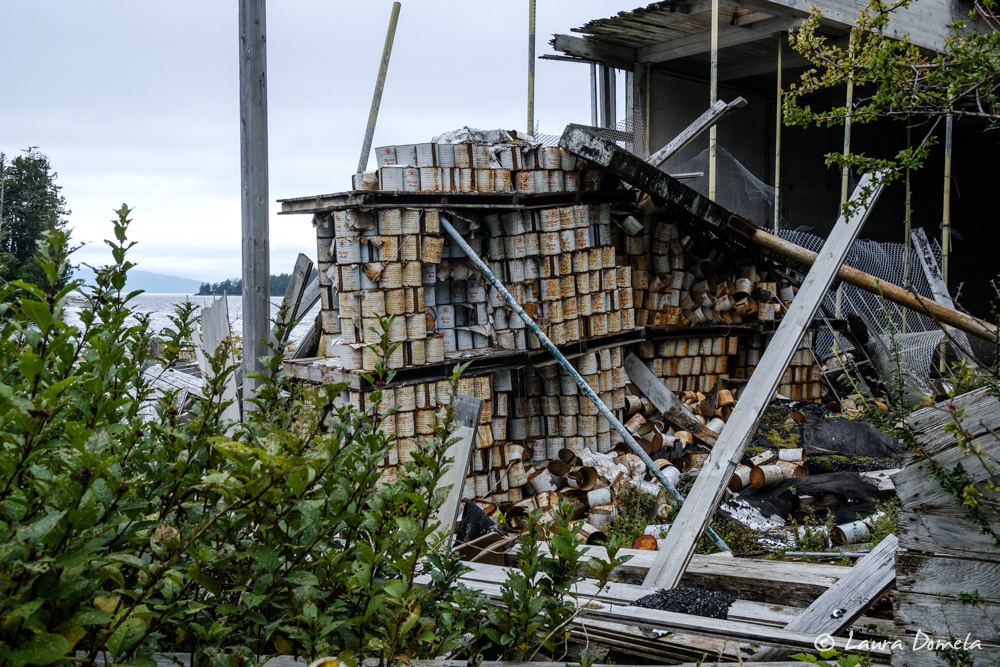 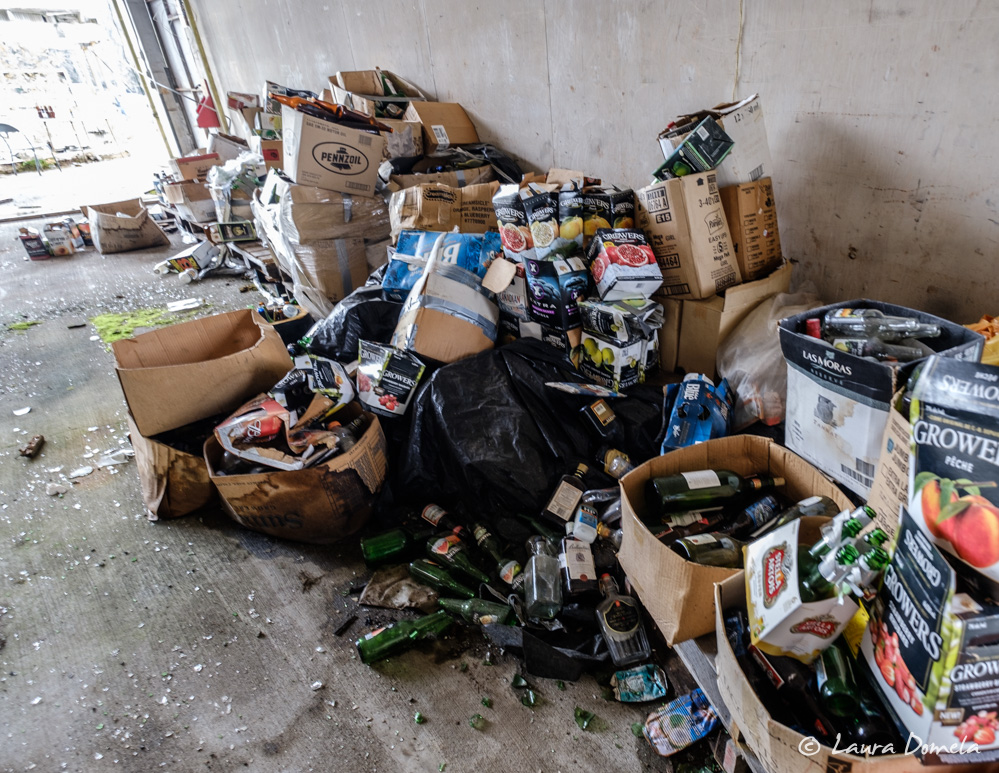 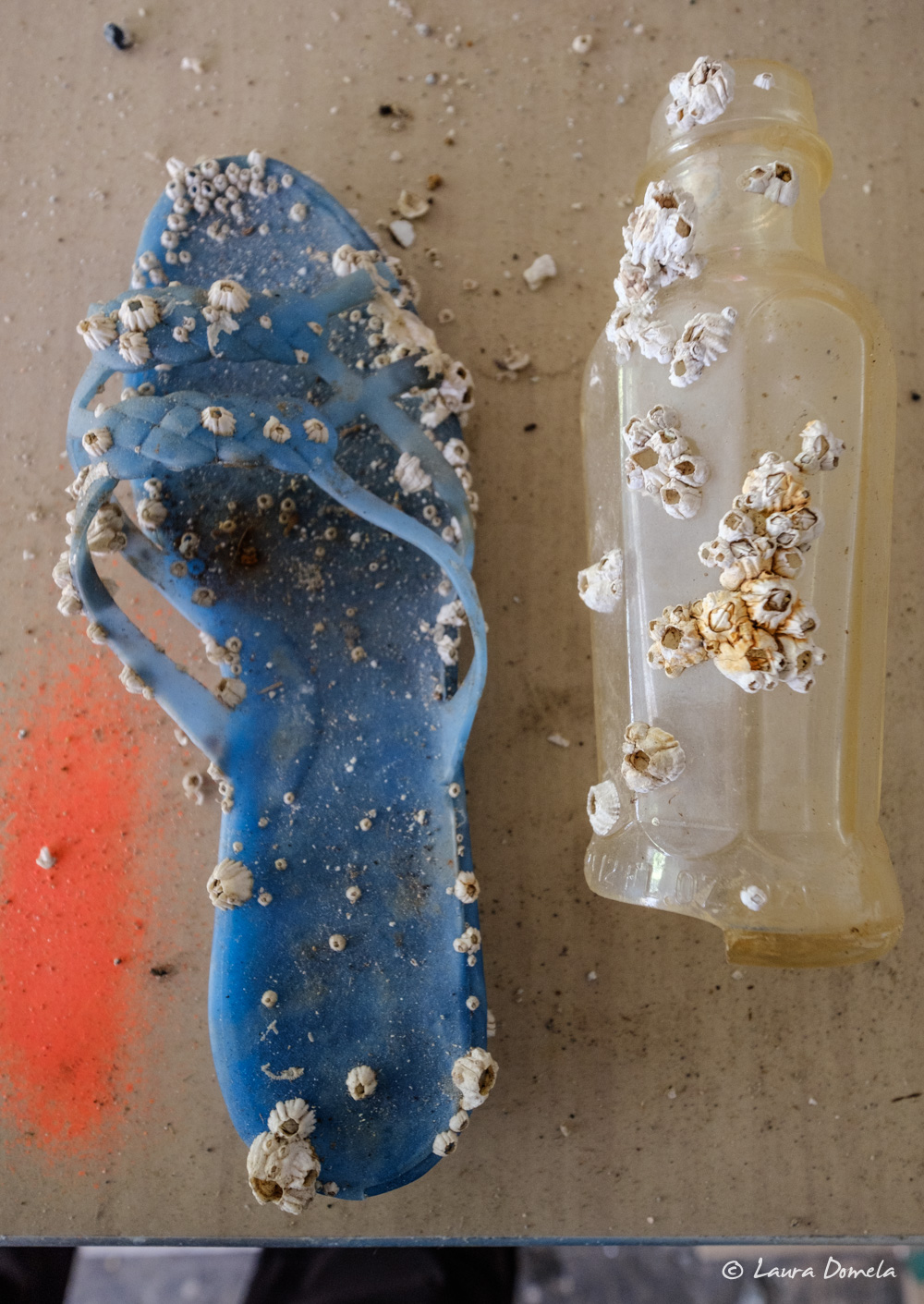 The whole place feels spooky, like people left in a hurry, rushed out by some impending disaster. Bullet casings litter the ground, and bullet holes pierce everything from buildings to fire extinguishers. 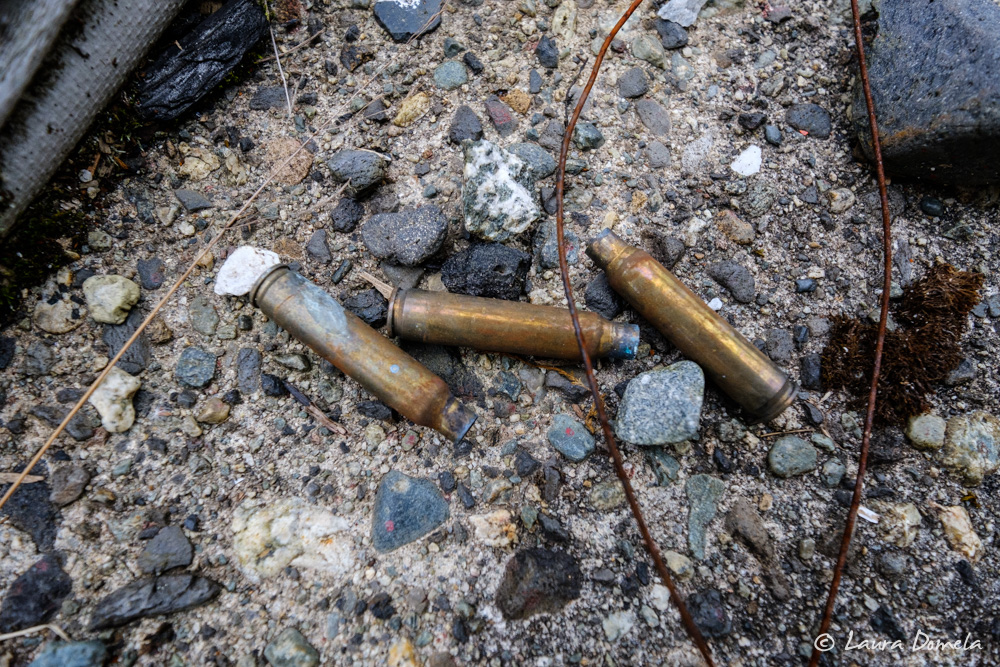 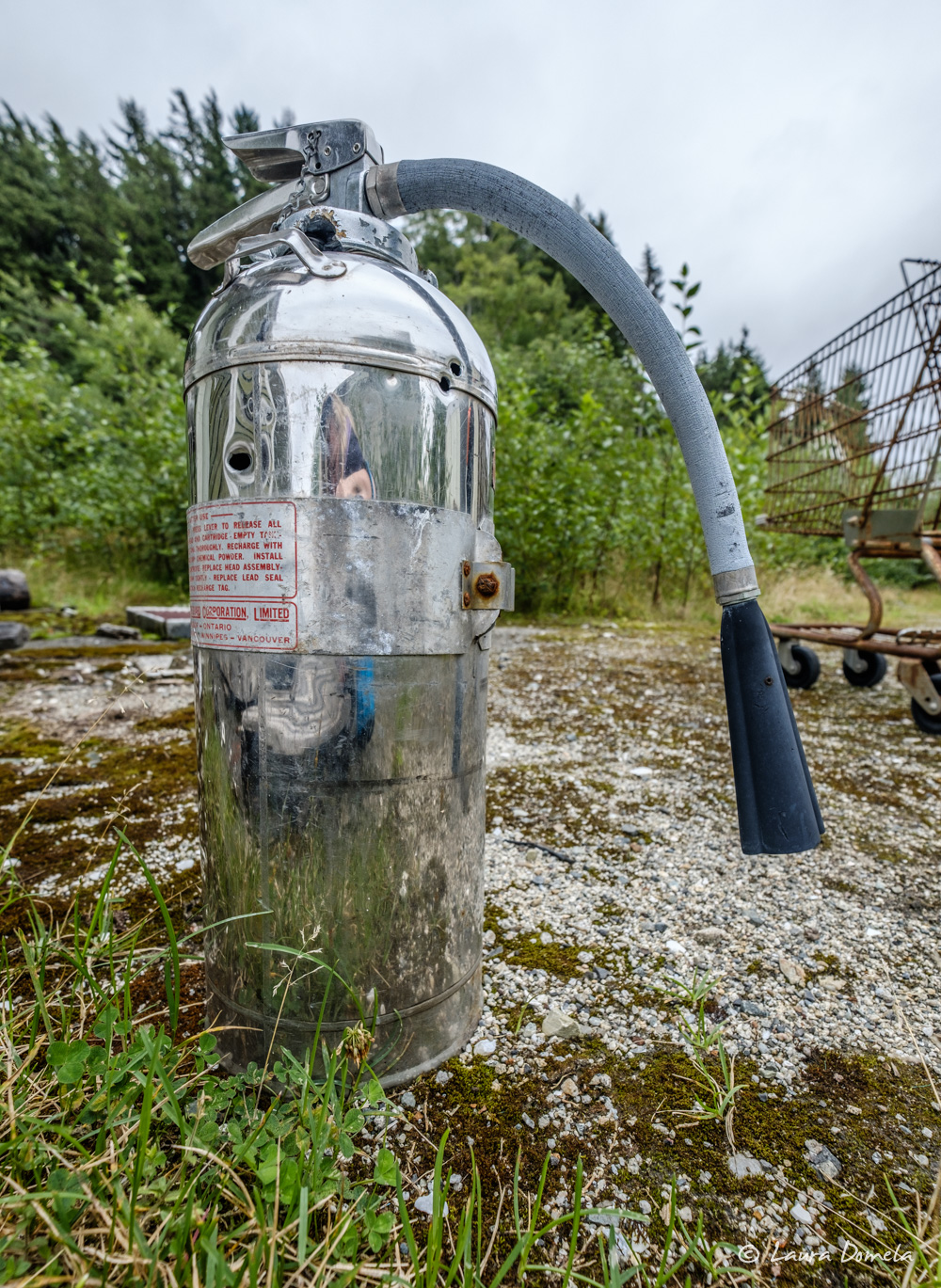 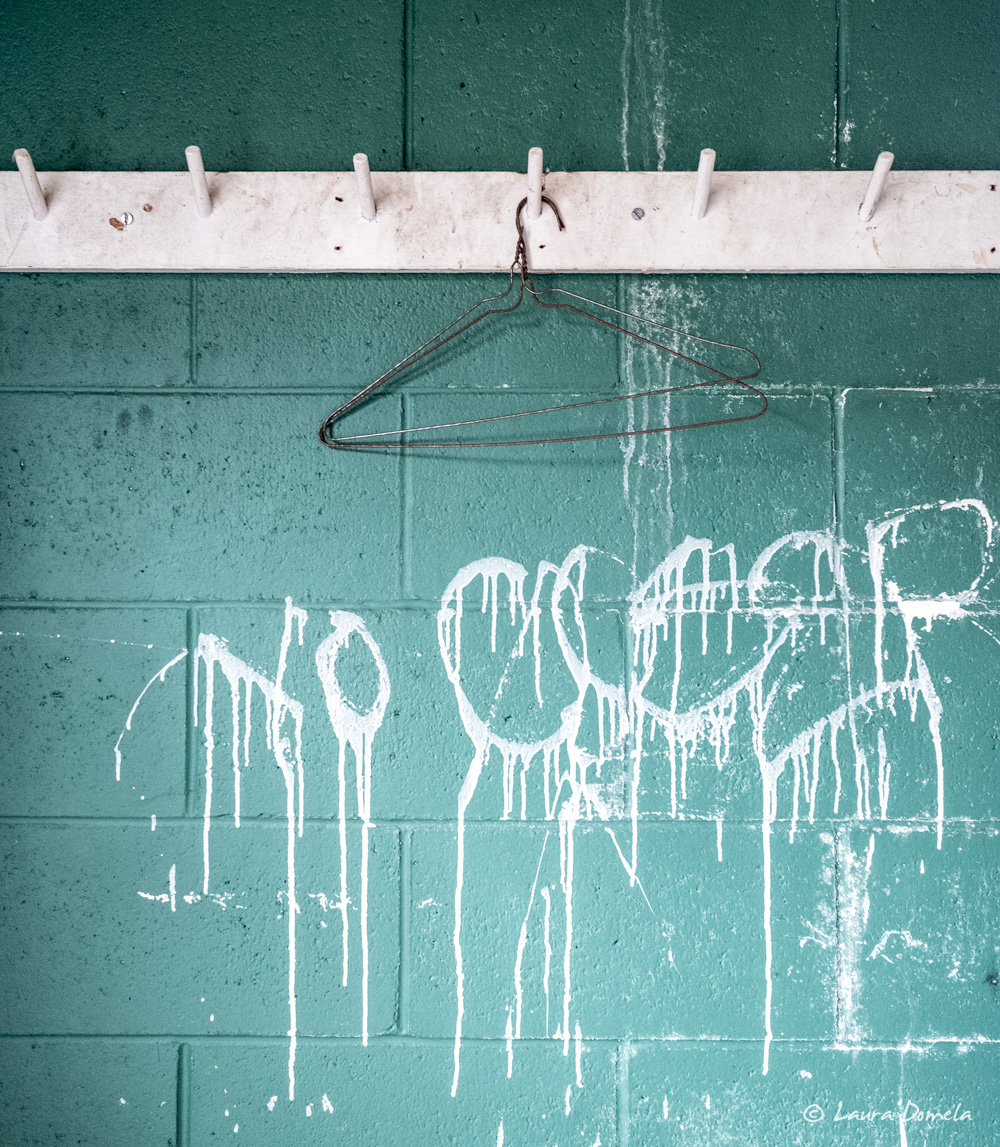 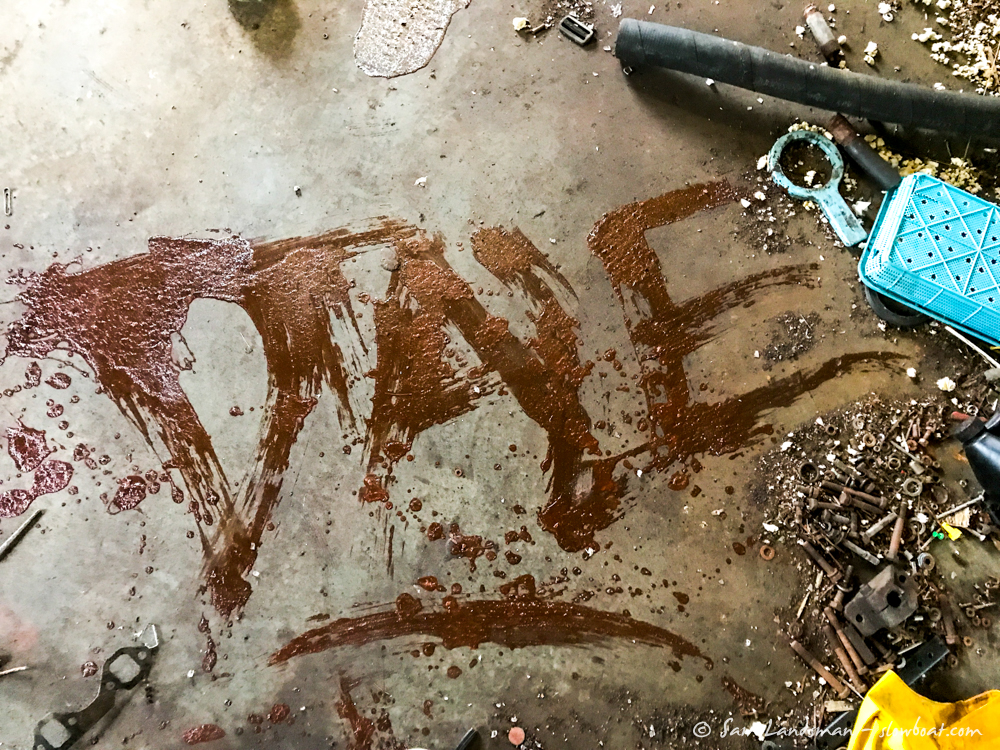 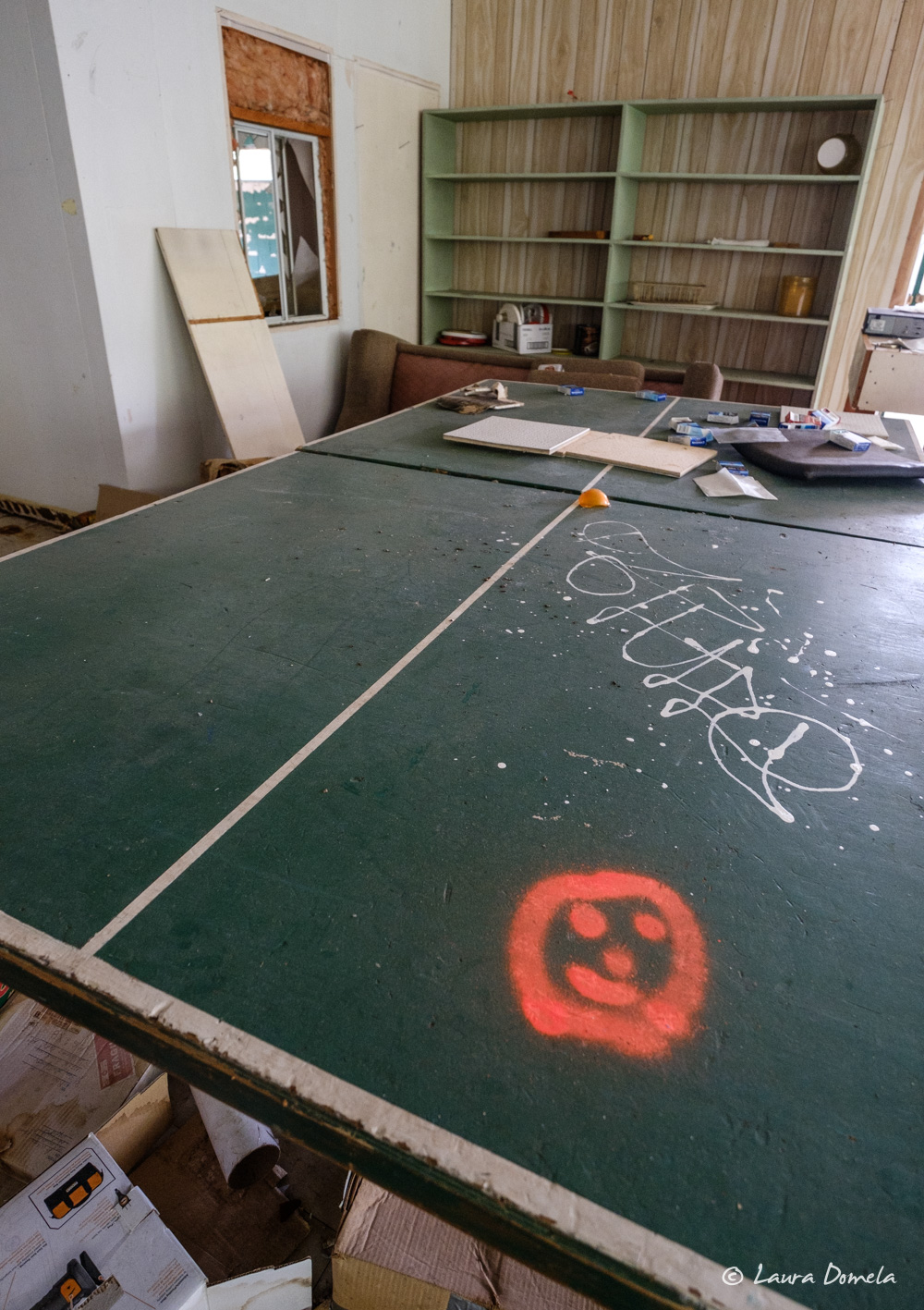 Recently, environmentalists and nearby First Nations groups have pushed the Canadian government to fund a serious cleanup at Namu. With cleanup planned for Butedale as well, Ocean Falls may soon be the only remaining ghost town in the area. 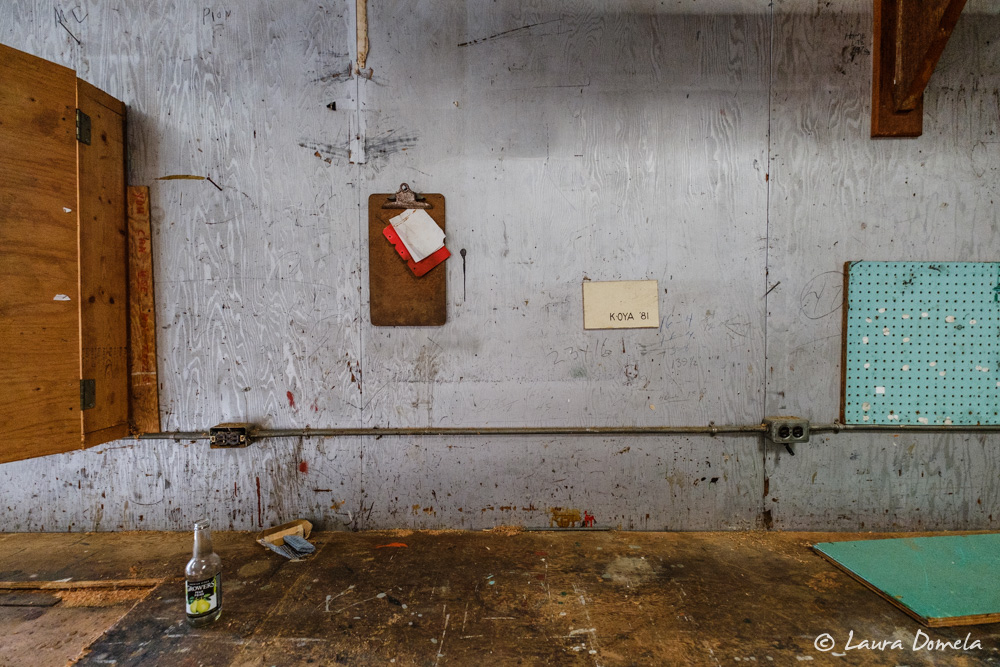 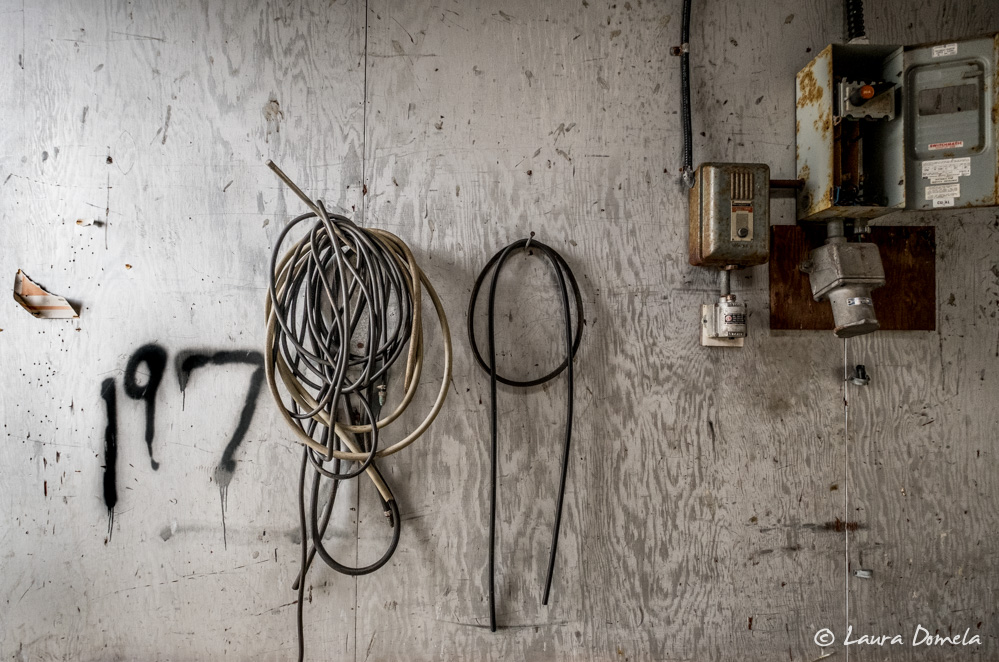 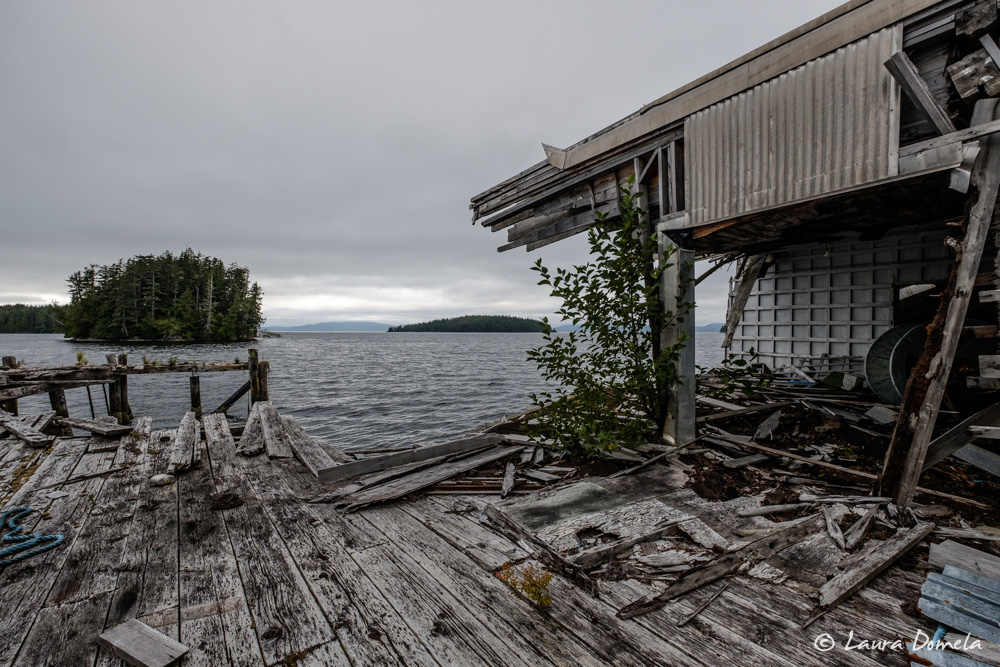