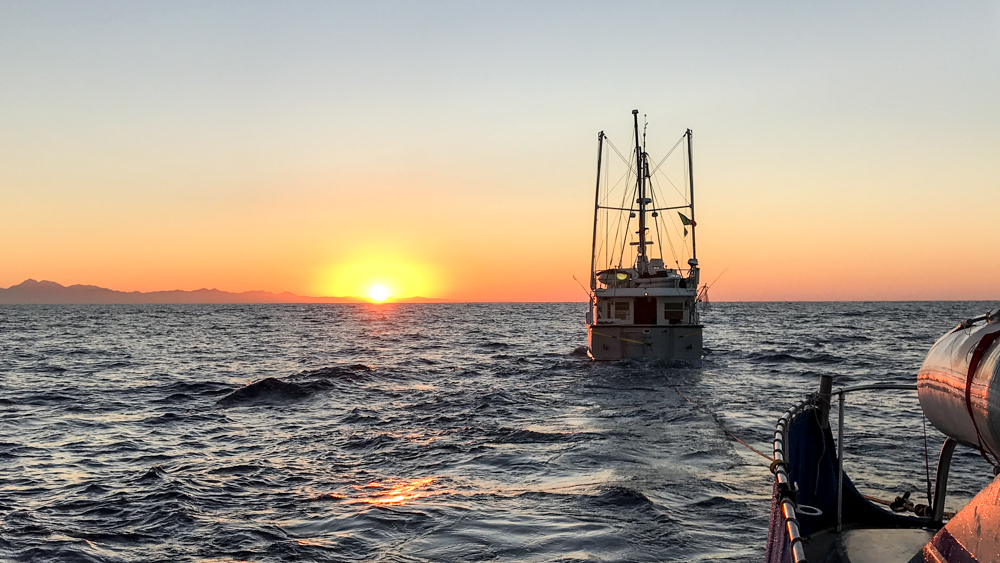 The trip so far has been uneventful. That ended today.

We departed Mag Bay in predawn darkness for the 185nm, 28 hour run to San Jose del Cabo. This is the most barren section of coast on the Baja Peninsula. No services, no anchorages, just bluffs and beaches and maybe a few villages here and there.

The first ten hours were easy. A bit of fog as we exited Mag Bay, but it quickly burned off. The coast south of Mag Bay is gorgeous, with desert bluffs rising precipitously from the surf below. The ocean was reasonably calm, with light wind chop and a low and lazy ground swell.

About 3:00 p.m. Brown Eyed Girl, a 28-foot Skipjack, suffered an outdrive failure, rendering their main diesel engine useless. They were running on a small, gasoline powered kicker about 20nm offshore. They had enough gas to get through the night, but not enough to reach Cabo, or any other port. We were 22nm ahead of them, with most of the fleet behind us.

The radio chatter wasn’t encouraging. Confusion prevailed. We heard lots of talk about transferring gas, but little about how much gas they actually needed. They had twelve gallons aboard. Two boats offered to provide an additional 26 gallons. I did some math and figured that, best case, they might have enough to get into Cabo. They wouldn’t have any reserve, though. If conditions deteriorated, if the current swung around against them, if the fuel got contaminated during the transfer or dropped while refilling the tank, they wouldn’t make it.

Soon after the initial radio call we offered to take Brown Eyed Girl in tow and drag them into Cabo. Embarrassed about the whole situation and not wanting to inconvenience us, they declined. Eventually, a boat behind them offered a tow, which they reluctantly accepted. Things were looking up.

I went off watch at 6:00 p.m. and quickly fell asleep. At 7:00 p.m. the motion aboard changed. The engine slowed and then sped up. We were pitching a lot more than we had been. I headed up to the pilothouse to see what was happening.

The boat that offered to tow Brown Eyed Girl had bailed. They were worried they couldn’t go slowly enough to safely tow. They’d continue to Cabo, along with everyone else, and check in with Brown Eyed Girl periodically by VHF or satellite.

We deemed this unacceptable. We weren’t going to leave Brown Eyed Girl alone on the ocean for the next 34 hours.

Throughout the afternoon, I’d been plotting Brown Eyed Girl’s position. When we turned around we were approximately 23nm southeast of them. I plotted their course and an intercept point and set our heading for a point on their course three nautical miles ahead of our estimated intercept. When we reached that point, we’d run a reciprocal course until we met.

As we motored towards them, we formulated a plan for towing. We had a 100-foot section of 1” diameter braided line that would form the primary tow line. But what would we use as a bridle?

We had four lifting straps to hoist a motorcycle aboard, and we fashioned these into a makeshift bridle. Our goal was to spread the load from the port and starboard stern cleats and have the 1” line attached to the bridle on centerline and aft of the swimstep. Two lifting straps combined turned out to be the perfect length.

I assembled the bridle, attached it to the boat, and tied the 1” towline onto the bridle. The next puzzle was how to get the bitter end of the tow line to Brown Eyed Girl. Conditions were pretty calm for the ocean, but still too bumpy to safely pull alongside, and we weren’t optimistic about our ability to toss the line with sufficient precision for them to catch it. Especially in the dark, when we’d be initiating the tow.

We decided to tie the bitter end on a large, white, round fender. I’d stand in the cockpit, drop the fender in the water, and slowly pay out the line while we made a slow pass in front of Brown Eyed Girl. When the fender passed their bow, they’d grab it with a boathook. Basically the same way you’d pick up a water skier. This plan minimized the risk of fouling the prop and the white buoy would be easy to spot in the dark.

The plan worked perfectly on our first attempt. We intercepted them right where we expected, then spent a few minutes getting comfortable with boat movement and getting everyone on the same page about the plan. At about 9:50 p.m. we started the process and by 10:00 we had them under tow and were on course for Cabo, 110nm away.

We slowly increased our speed to about 5.5 knots, running 1500 RPM. This was slower than we’d normally cruise, but it still allowed for a daylight arrival in Cabo and it wouldn’t put undue stress on the towing setup. The next 18 hours were anxious but uneventful. Thankfully the weather, which was good to begin with, only improved.

Throughout the tow we kept the CUBAR organizers updated on our position and ETA. When we finally pulled into the marina, about six hours later than we’d originally anticipated, we were greeted with a symphony of horns and thankful waves. The recognition was nice (so were the endless drinks later), but it didn’t feel entirely warranted. We were simply helping fellow mariners in their time of need, just as mariners have done for generations.

Several factors helped make this a success. Weather conditions were good and our towing gear was stout. The Nordhavn was happy going slowly (some of the bigger, higher powered boats aren’t). Although we only had two people aboard, we both had enough energy to power through a day and a half without much sleep. The most hazardous part of the process was probably setting up the tow, which required working outside (briefly) on a rolling swimstep. Decent balance, fitness, and agility made this safe.

Throughout the incident I tried to imagine what it would be like to be the one needing help. Bobbing around, a hundred miles from anything, at the mercy of the ocean. I hope that day never comes, but if it does, maybe there will be a helpful fellow mariner nearby.

Our route, not including the detour to pick up Brown Eyed Girl, 185nm: 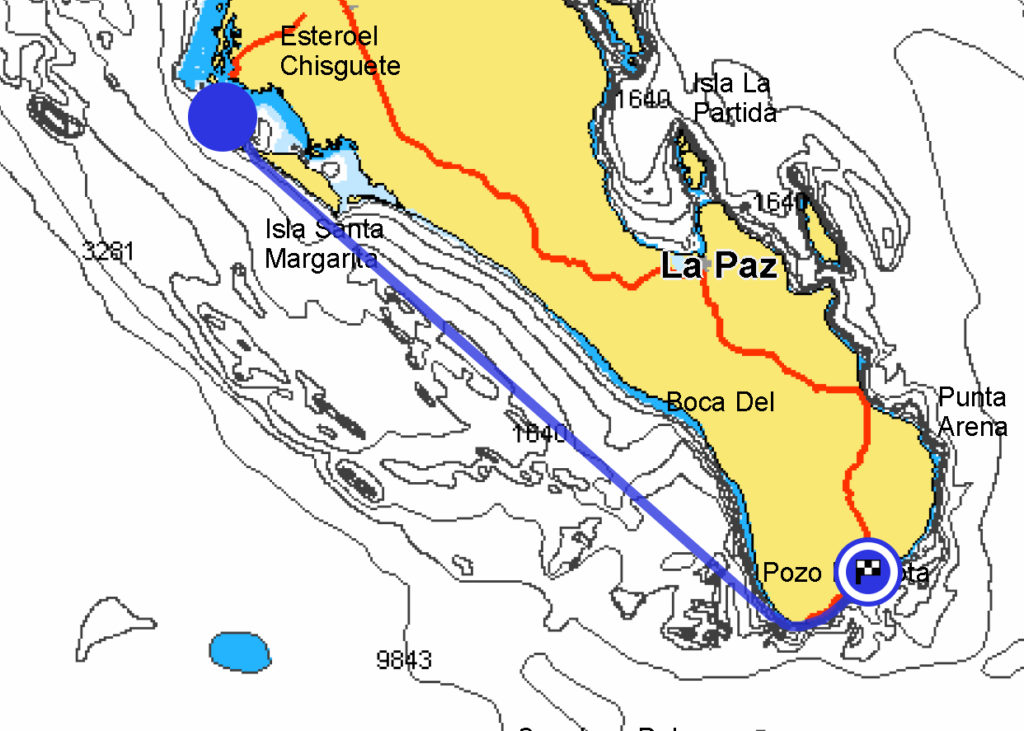