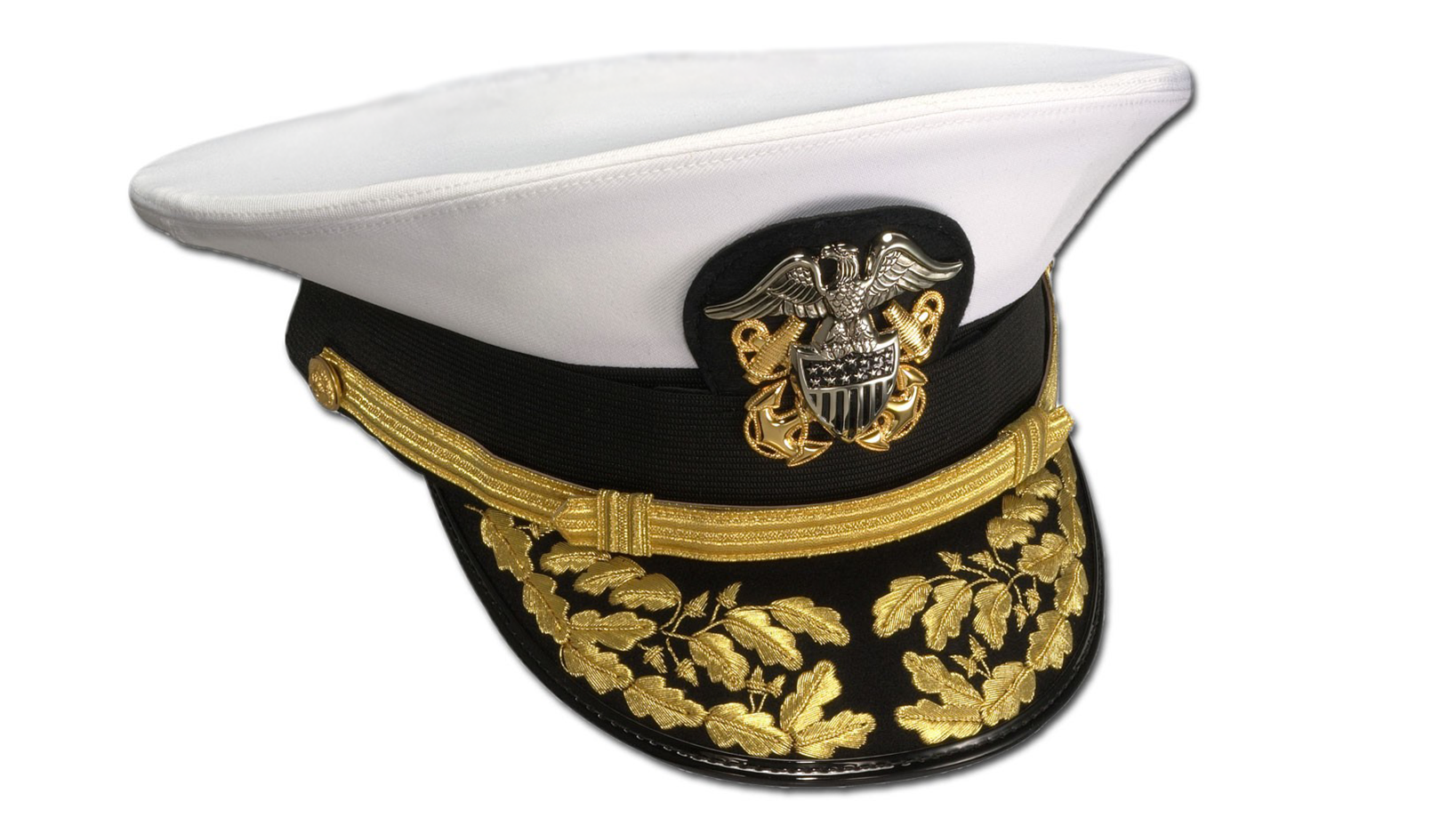 Boating is for men.

I know. Not the first sentence you expected from me, was it? But hang in there and we’ll have a fun little ride.

I started boating for real, with my own boat, in 2014 (in my 40s), but I grew up around sailboats and sailing. My grandfather had a sailboat. Our family friend Conrad had a sailboat. My mom had a sailboat. I spent a lot of my childhood at the marina with my head hanging off the edge of the dock gazing at sea anemones and little fish, or pretending my little brother and I were stranded on a tropical island where we had to make shoes out of palm fronds. (Our “island” was actually the island in the marina parking lot covered with a palm tree and some other Southern California beachy foliage.) And of course, I grew up sailing. My grandpa made sure I knew how to twirl a perfect Flemish flake and how to hold a compass heading, but as a kid I was mostly interested in cheering as the dolphins surfed our bow on our trips back and forth between Long Beach and Catalina Island. (I still do that today, just in a different locale.)

Call me naive, but I honestly had no idea when I became a boat owner just how male-focused boating was.

Story No. 1: This advertisement for Kadey Krogen Yachts, showing an interior photograph of the salon and galley with the tag line “Not just seaworthy, but Sheworthy.” Barf. 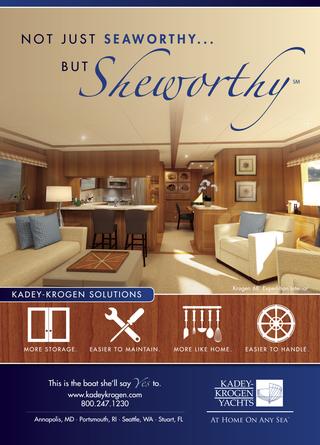 I know in a lot of couples the man is the one excited about boating and the woman is dragged along as a less-enthusiastic participant. But, I’m the one who guided my marriage into boat ownership, and I’m the one who has been at the helm 90+ percent of the 750 days and 2,100 hours we’ve been aboard during the past three years. My husband loves boating too, and we share in all kinds of duties and responsibilities on the boat. I’m an artist, so I also love to cook, and I spend a lot of time in the galley working to be “cheffy”. My husband’s background is in electronics engineering, so he does most of the mechanical and electrical maintenance. But when my husband broke his arm right before we were scheduled to install our new solar system, I installed our new solar panels, wiring, chargers, and control panel. When I don’t feel like cooking, my husband can whip up a delicious tenderloin with truffle butter, sautéed mushrooms, and grilled asparagus. Just because he’s a man doesn’t mean he doesn’t throw down in the galley. And just because I’m a woman doesn’t mean I don’t know how to replace our cutless bearings.

Story No. 2: We were returning to the US from a few days in the Gulf Islands in Canada (before we had Nexus) and we called the customs office at our marina as we were arriving. They instructed us to go to our slip and get tied up, then have the captain come up to the office with passports and boat documents while everyone else remained on board. I pulled Airship into its slip, Kevin got the lines all tied up, and then I gathered our documents and headed up to the customs office.

Me:  Hi, I called in about 20 minutes ago. We arrived just now from Canada. Here are our passports and other documents.

Customs officer:  Okay. So who is still on board?

Me:  Kevin Morris. My husband (as customs guy looks over Kevin’s passport).

Customs officer:  Okay, so he is the captain?

Me:  No. I’m the captain. You said to have the captain come to the office.

I mean, if there is a captain on Airship, I guess it would be me. I don’t have a captain’s license (yet), and I don’t have a military ranking, but I’m the helmsman and the navigator. Kevin is the engineer and the crew, and we share the communications duties.

Note: Merriam-Webster defines helmsman as “a person (especially a man) who steers a ship or boat.” There is no entry for “helmswoman.” “Helmsperson” refers you to “helmsman”. See? Even the dictionary says that boating is for men.

So anyway, where was I?

At some point, I started hearing the term “admiral” used by men to refer to “the wife aboard.” Now, I know there are women who don’t have much involvement in the actual boat part of boating (besides making kickass appetizers for happy hour) and that’s totally fine. Not everyone likes to do the same things, and if there is compromise to be made so both people get what they want out of an activity, that’s healthy and part of being in a successful relationship.

Wondering: Should I be calling my husband “admiral”? I don’t think so.

The rank of admiral is the highest possible military rank in the United States Navy, but admirals are rarely at sea. My understanding is that by the time you reach admiral status, your duties are mostly supervisory, but reaching such a high rank takes dedication, proven skills, and many years of service and training. Giving this title to a person who has little interest in boats, has never been at the helm, or who calls the engine room “the place down there where the motor thingy is” makes no sense in a realistic way, so I’m left to assume this is one of those “let her wear the phony crown so I can do my boat stuff” titles. I’ve yet to find any woman who likes being called “admiral”. In fact, every single woman I’ve asked says she hates the title, so why does it persist? ARE there women out there somewhere who like it, and if there are, why do they? To me, it feels condescending. Maybe it’s a generational thing. Maybe it’s a “wink wink, let him call me admiral, I know I really AM the boss” thing. Maybe it’s what some women put up with so that if they go boating, they’ll get those diamond earrings they want once the trip to Alaska is over. Maybe it’s supposed to be tongue-in-cheek and I’m being far too serious about it. Could easily be. It’s happened before.

Okay, so here’s the current situation. I’ve been invited to participate in a panel at Trawlerfest called “Admirals Roundtable” — for women only, of course. Prior to this panel, I’ll be giving three other seminars with my Slowboat partners, Kevin and Sam (details here), but after my last seminar I’ve agreed to show up for this admiral thing. The other women on the panel are all accomplished boaters who have way more experience than I do, and I’m pretty sure no one calls them admiral. (Or maybe they do!? It’s so confusing!!) When I was approached about doing this panel, one of the selling points was that this roundtable was happening at the same time as the diesel engine workshop!!! How convenient, right? The assumption is that the men will all sign up for the diesel workshop. What will their wives do in the meantime? Let’s make something for the little ladies to attend! So now I have to willingly connect myself publicly with the word “admiral” when I’d much rather be learning more about diesel engines. And I’m worried.

I’m worried about what I’ll say. I’m worried because I’m not the admiral. Will the women coming to this roundtable all show up wearing admiral hats? Will I have to shush myself so I don’t offend anyone with my cranky view on this? Am I missing something and this whole admiral thing is actually a very cool underground club for women that I really DO want to be a part of? I guess I’ll find out!

In the meantime, if you have any insight or opinions on the matter, do speak up. I’d love to know what you think.

Even if you’re a man.