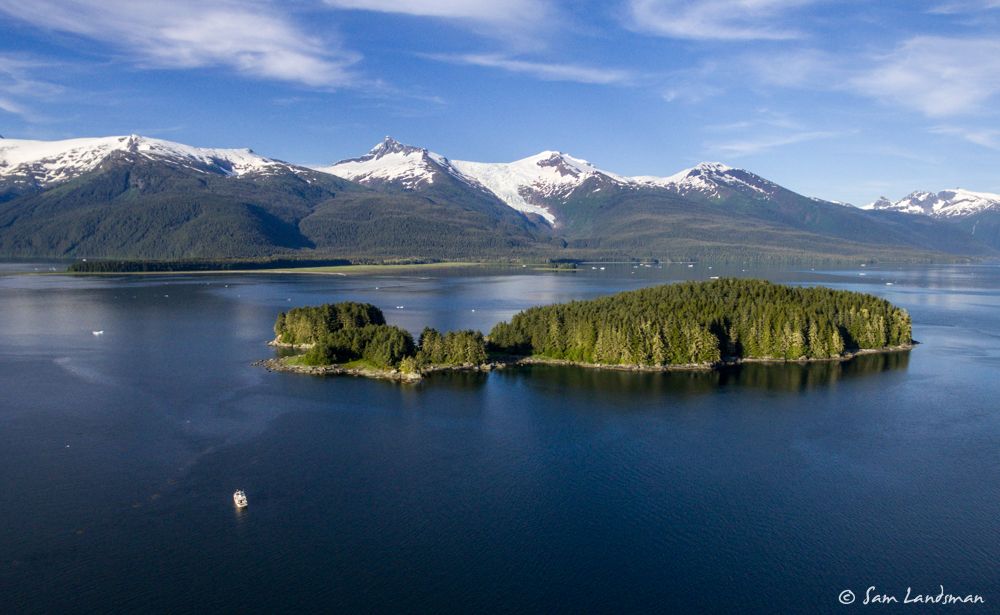 Soon after the flotilla arrived in Juneau I had to leave the boat and return to the lower 48 by air. Juneau is a great place to do this since there’s first-come, first-served open moorage available (rather than hot-berthing), reasonable rates (~$230 for a month, with power!), and good airline service (Alaska and Delta fly multiple flights per day to/from Seattle). Leaving the boat in a strange port can be a bit nerve-wracking, but this year I experimented with a free app called AtHome Video Streamer to convert the boat iPad into a security camera. I placed the iPad in the pilothouse facing aft and left a 120V light turned on (a visual indicator of shore power status). Using the free companion app, AtHome Camera, I could instantly check on the boat from afar. I’m a cheapskate and appreciate getting the most out of the gadgets already on the boat!

I returned to Juneau about a week later and started heading south towards Petersburg to pick up guests. With three nights to make the trip, I wanted to try some new anchorages. The weather forecast was perfect: sun, temps in the 70s, and wind under 10 knots.

After running around in the morning, I finally shoved off early in the afternoon. It was hot, sunny, and gorgeous motoring out of Gastineau Channel. 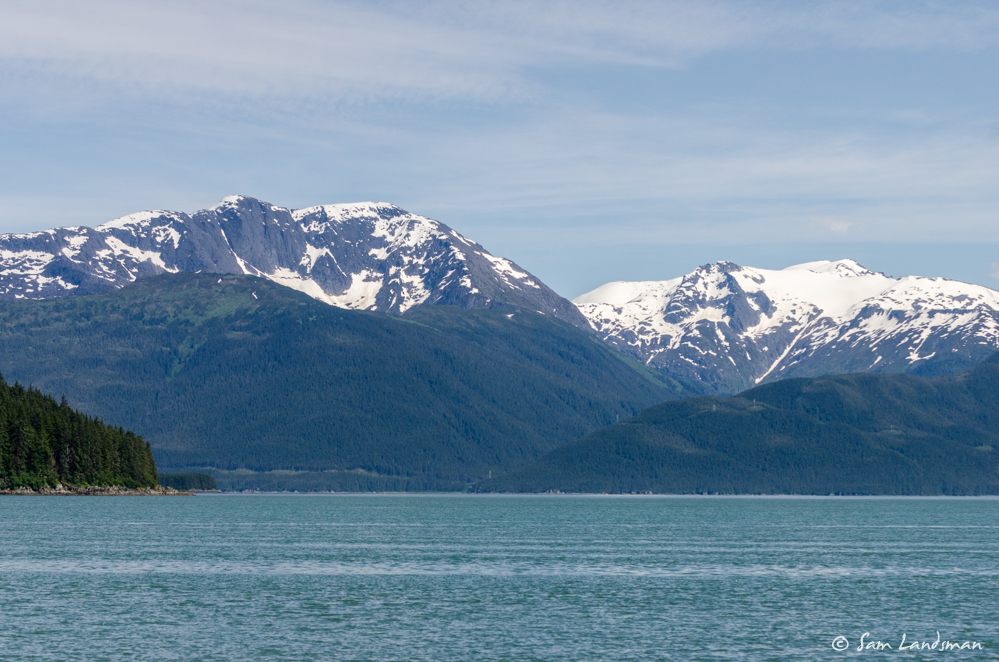 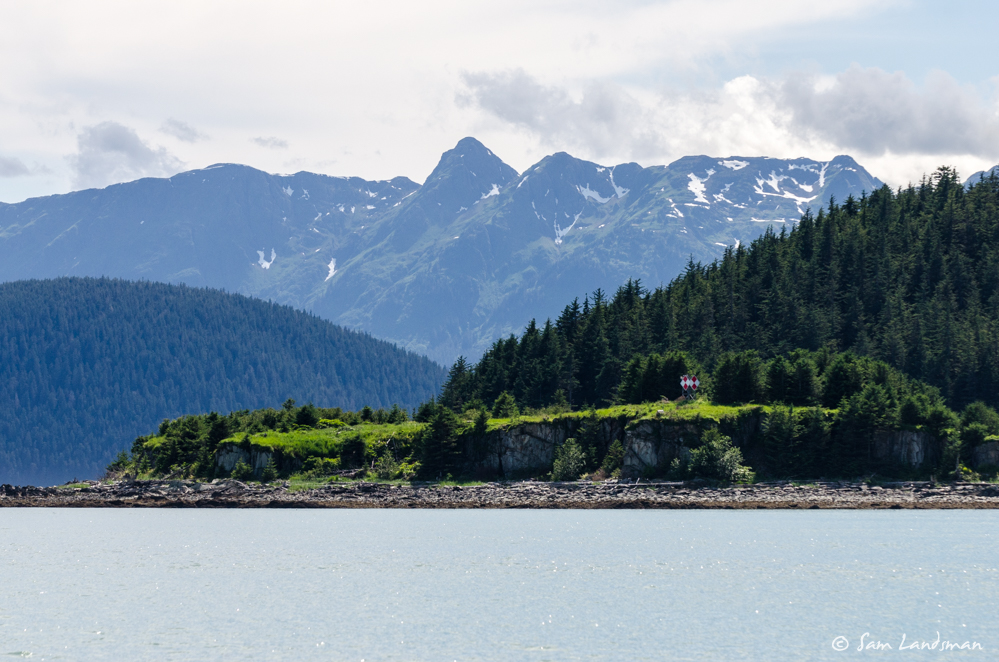 When I’m cruising alone I often depart with no particular destination set. I’ll have a few anchorages in mind, but will hold off selecting where I go until the last minute. Taku Harbor was the first possible stop, but I skipped it simply because gillnetters were busy fishing near the entrance. I didn’t feel like picking through their nets, there was plenty of daylight left, and the current was favorable, so I continued on. The next possibility was Limestone Inlet. I’ve never anchored in there, which made it somewhat intriguing, but it didn’t look all that inviting. The high-voltage power line connecting Juneau with the dam at Port Snettisham runs across the entrance, and some kind of aquaculture operation occupies the bay. I continued south.

Given the calm conditions, I eventually settled on anchorage at the mouth of Tracy Arm and Endicott Arm, south of Harbor Island and just west of Round Islet. This isn’t a particularly sheltered location, but it’s beautiful and a nice alternative to Tracy Arm Cove (busy!) and Wood Spit. I had the anchorage to myself, and what an anchorage it is! Sumdum Glacier and the surrounding peaks tower in the distance. Icebergs, thankfully no huge ones, race past the boat in the current. The area isn’t particularly well charted, but I found reasonable holding on a rocky bottom in about 60 feet of water. 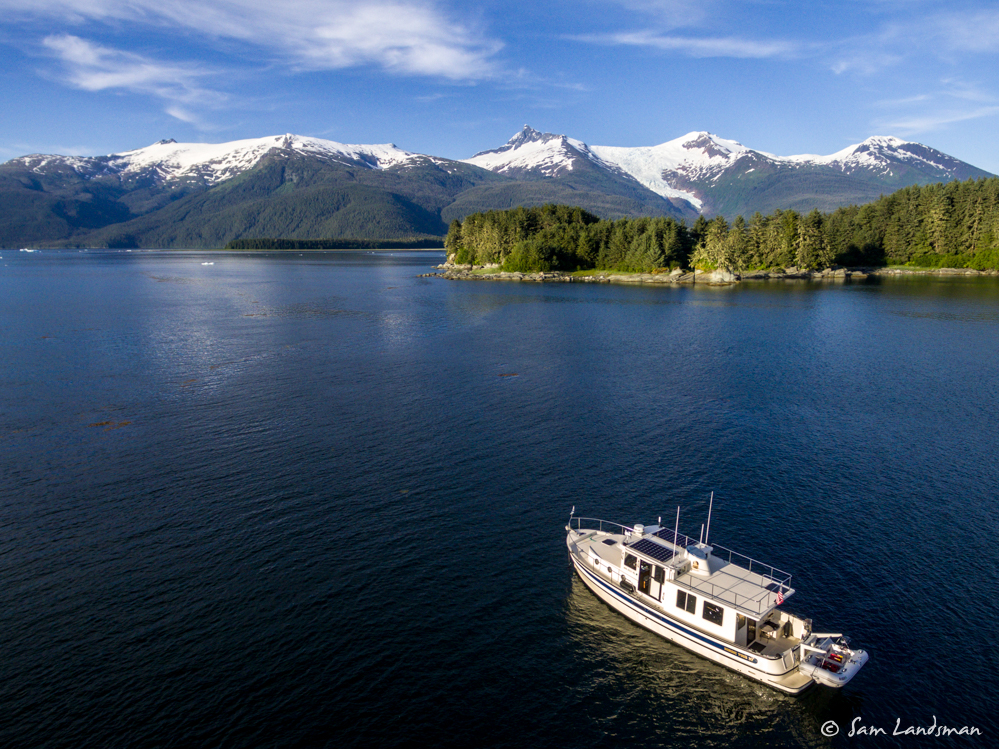 The next morning a cruise ship wake woke me early. I decided to pull the anchor and continue south. I’d never visited Hobart Bay and took a look insideto see if it warranted further exploration. A dilapidated float is in the cove on Entrance Island. I continued on looking for anchor sites. 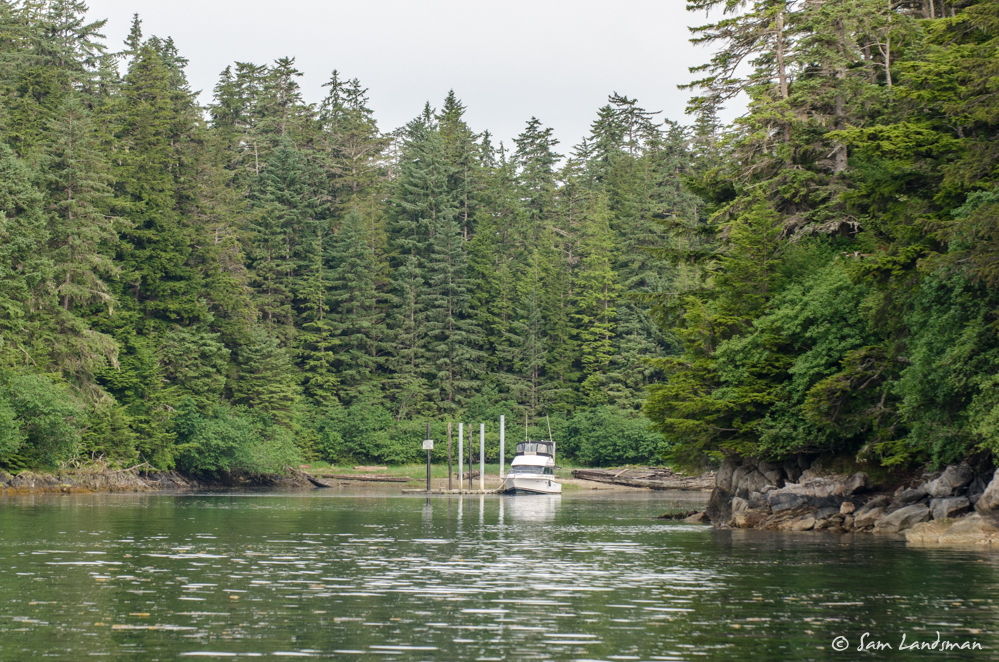 The more I cruise, the less I use the guide books. They’re great resources, full of useful information, but they’re not complete. And that’s not a bad thing. One of the joys of cruising in this area is the ability to find “new” places to explore. As I motored along the shoreline I found a nice spot to spend the night in the northeast corner of outer Hobart Bay. Like many places in Southeast, the water goes from too-deep (150+ feet) to too shallow (rocks and shoals!) quickly, making anchoring a bit of a challenge. I made a few circles, noting depths, and dropped the hook in about 80 feet. At the limit of where I’d swing the boat was in 30 feet of water. Perfect! 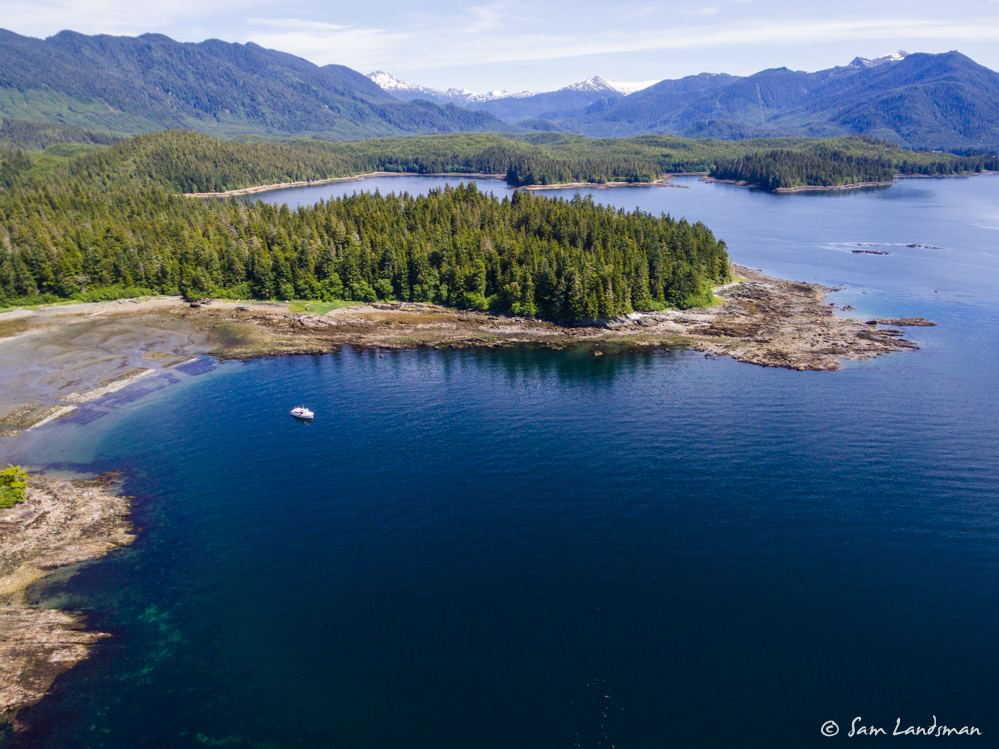 As the tide dropped, a peculiar pattern revealed itself onshore. This wasn’t obvious from the water, but it sure was from the drone! 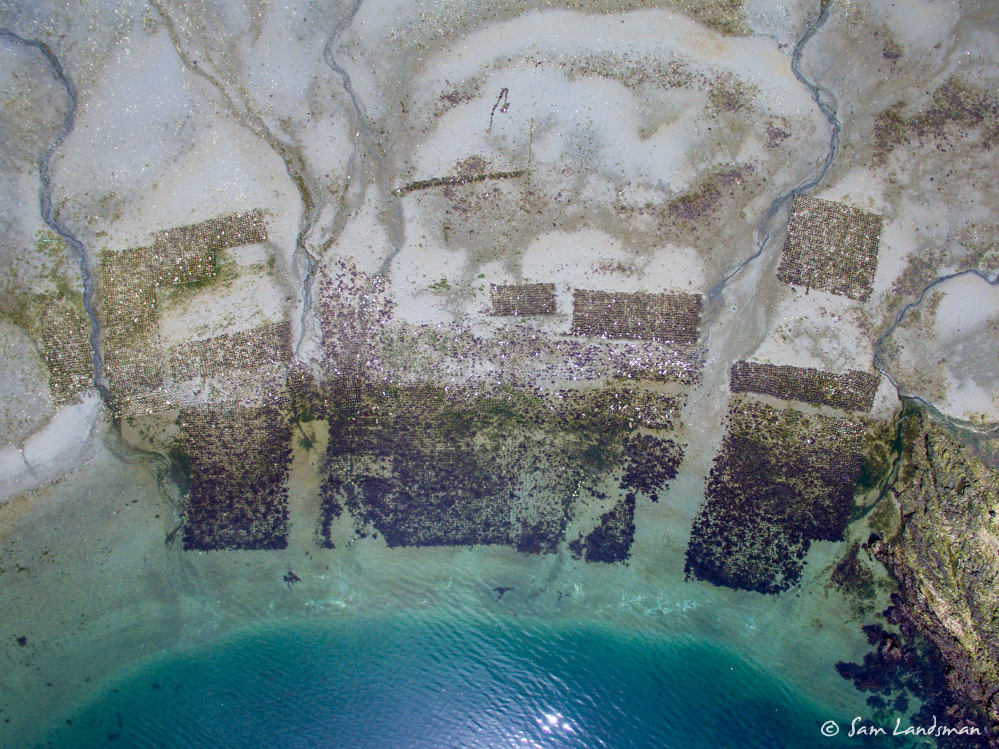 From the boat I could hear a whale sounding and splashing. I got in the dinghy for a closer look. It turned out to be a lone humpback lunge feeding just a few feet from shore. I watched for an hour. 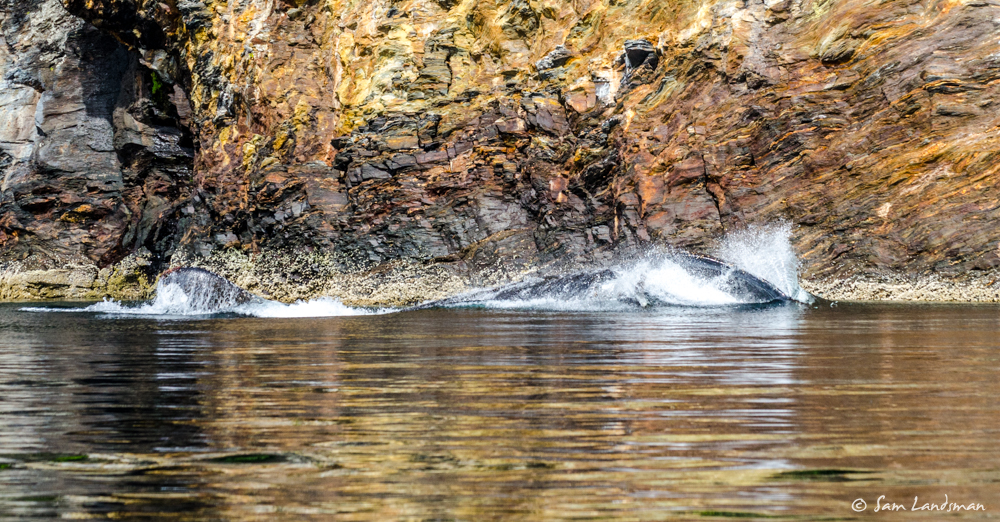 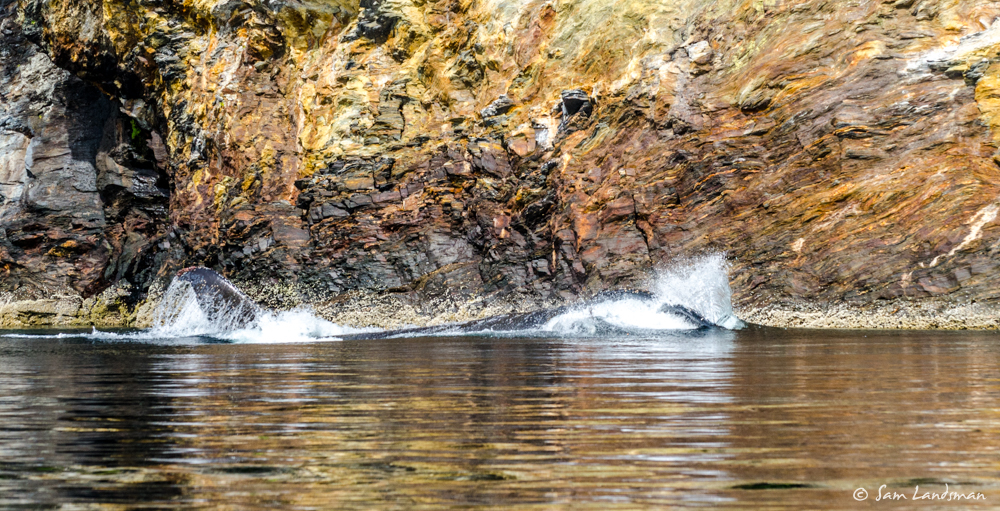 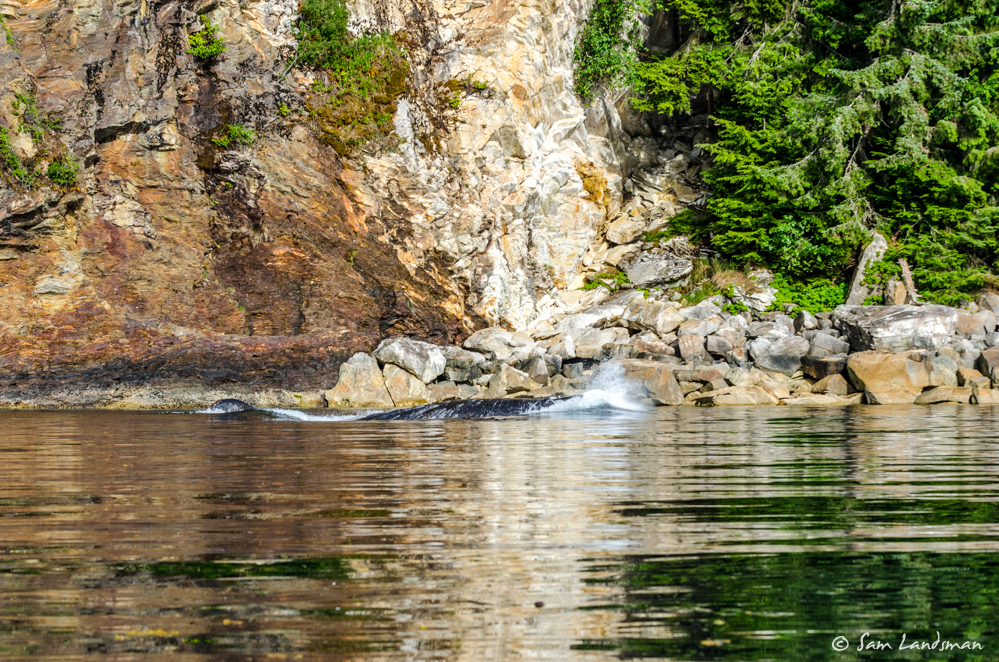 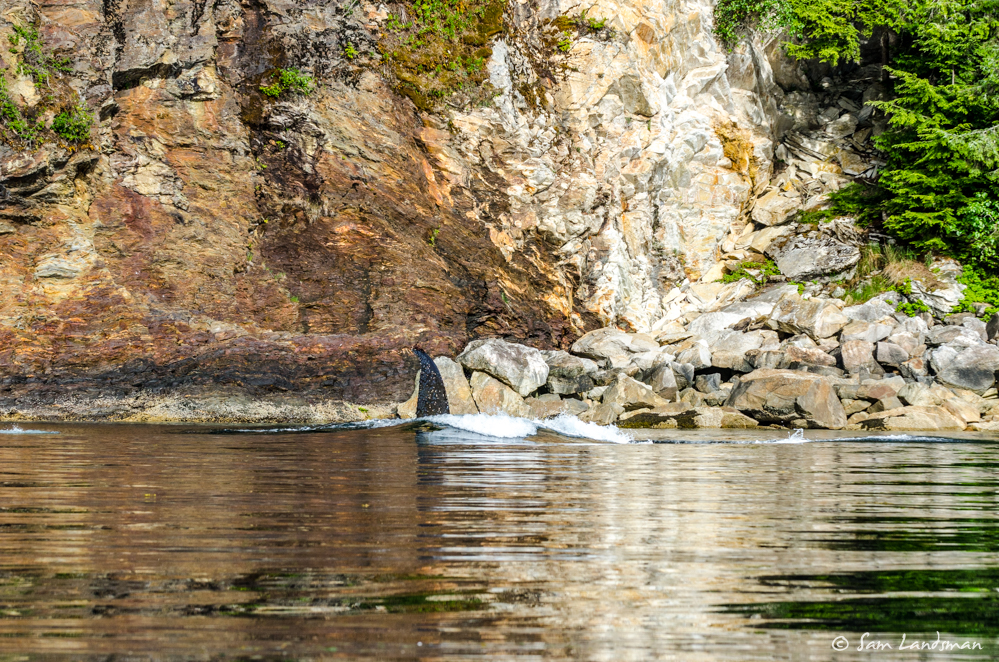 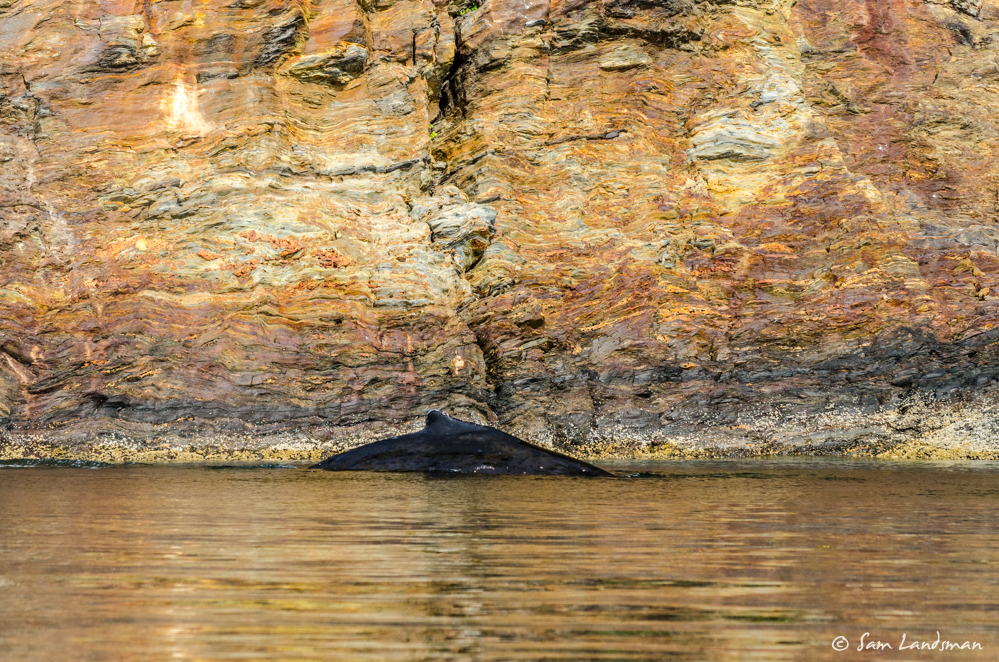 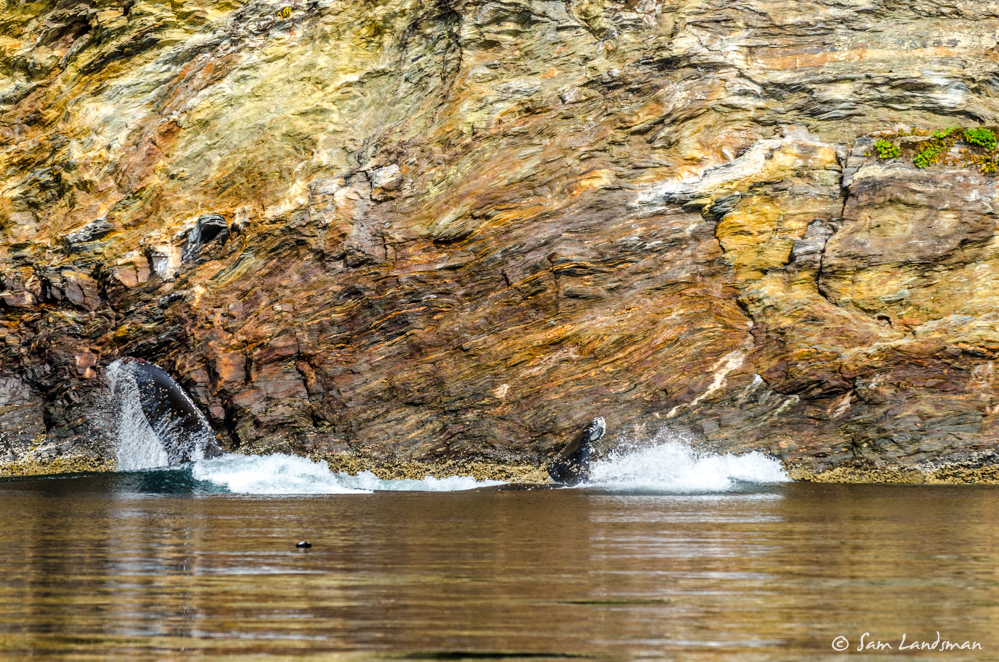 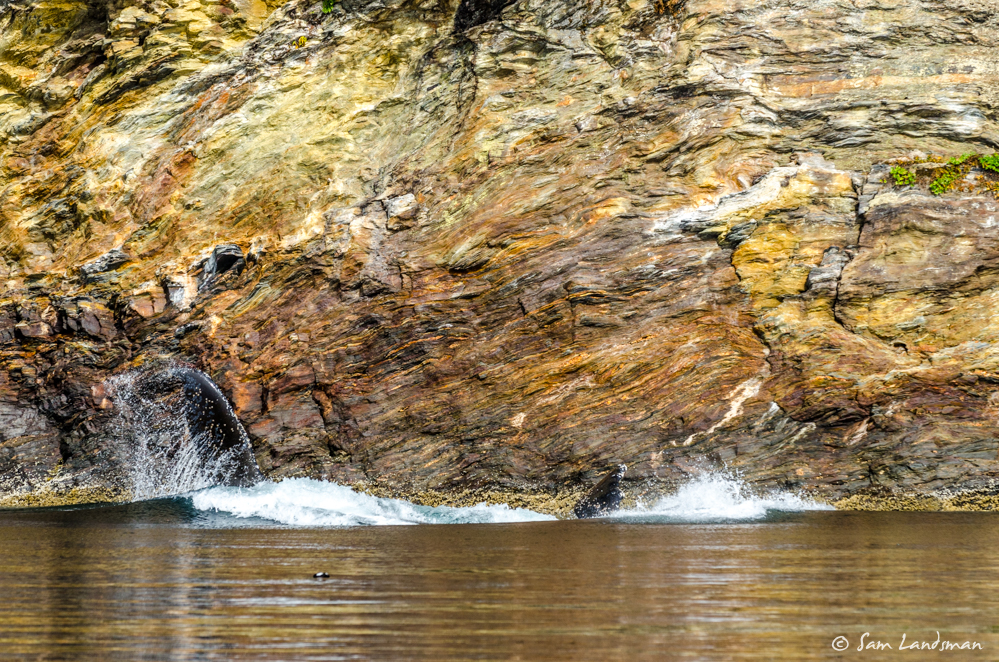 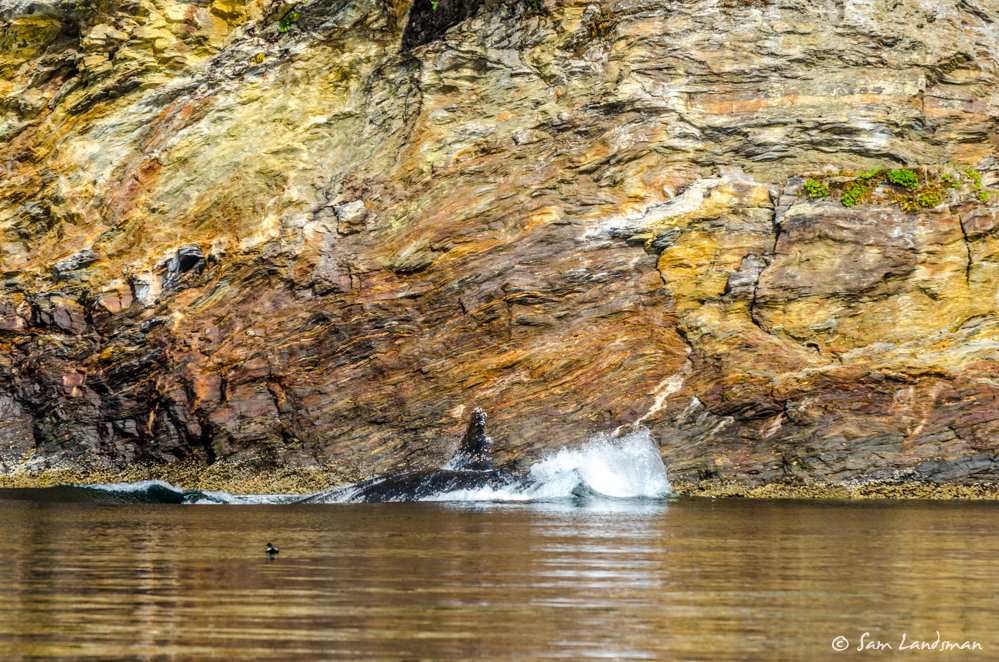 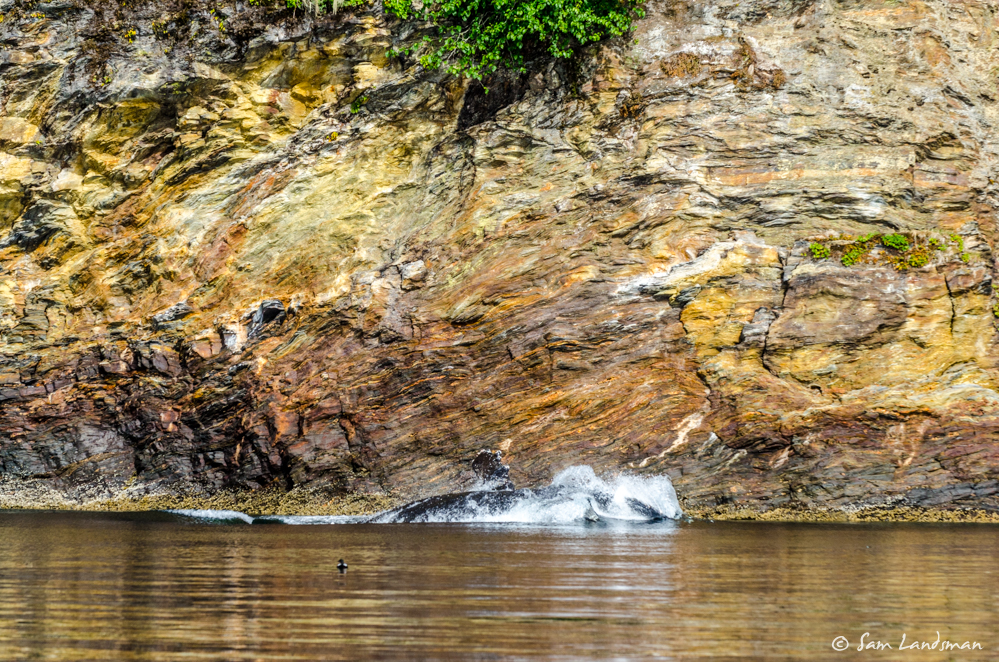 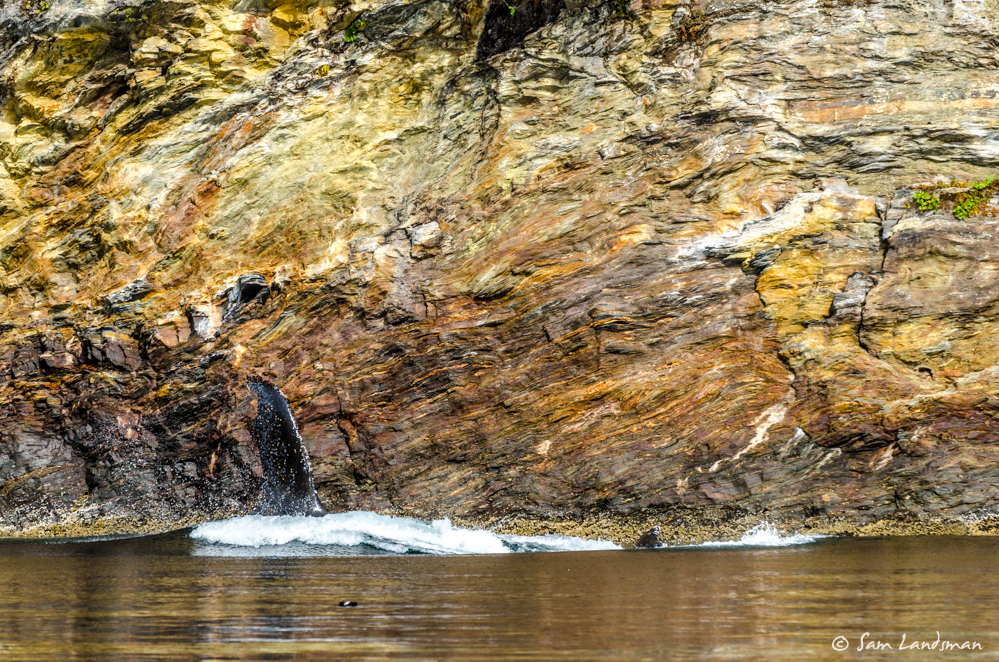 After watching the whale, I continued by dinghy around Hobart Bay. A large dock, probably related to logging, is in the outer bay. One boat was tied up to it, but I didn’t see any indication of people aboard and I don’t think the dock is for public use.

Further in, moderate currents and lots of rocks guard the inner part of Hobart Bay.

The chart showed a lagoon at the head of the bay, so I had to see what it was like. I arrived near high tide and found the narrow channel. 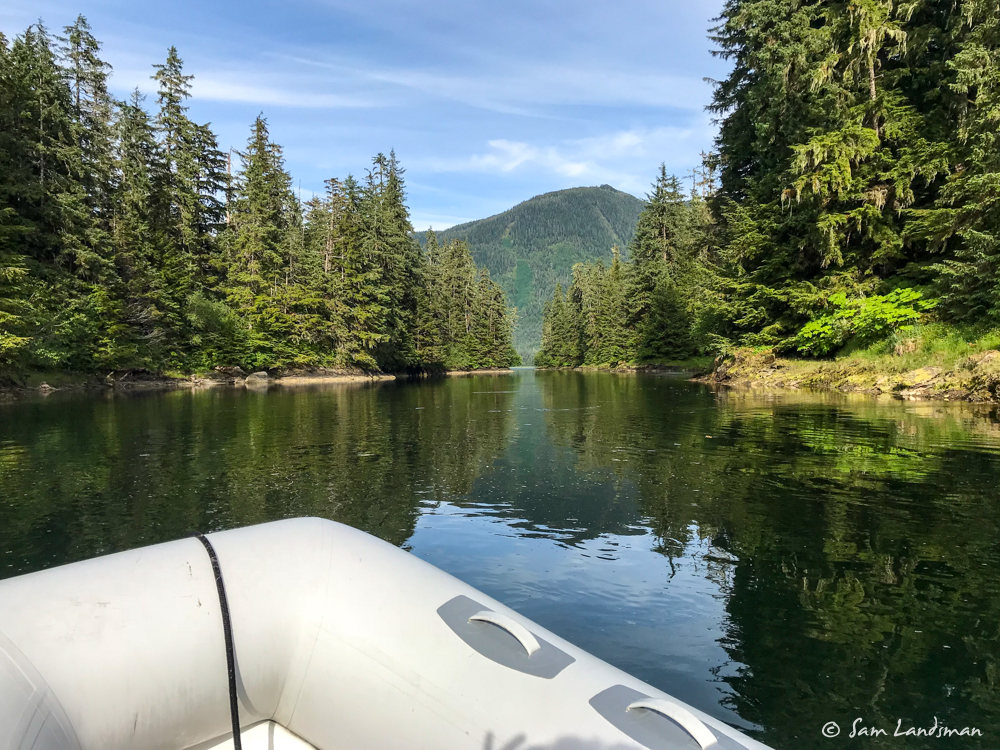 The rapids were fairly tame but the water was shallow. I’m not sure it’s navigable at low tides. 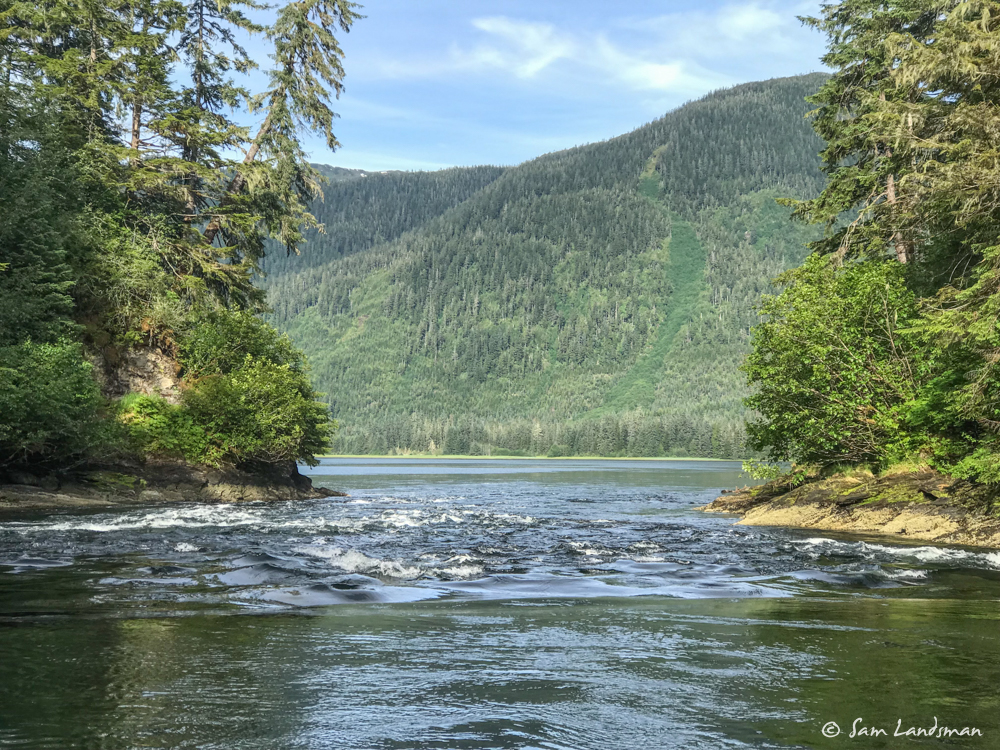 I continued south the following day. The weather was still perfect: warm, calm, mostly sunny. I briefly considered spending the night at Cape Fanshaw, but there was already another boat anchored (I’m getting spoiled!) and it was early. I continued. 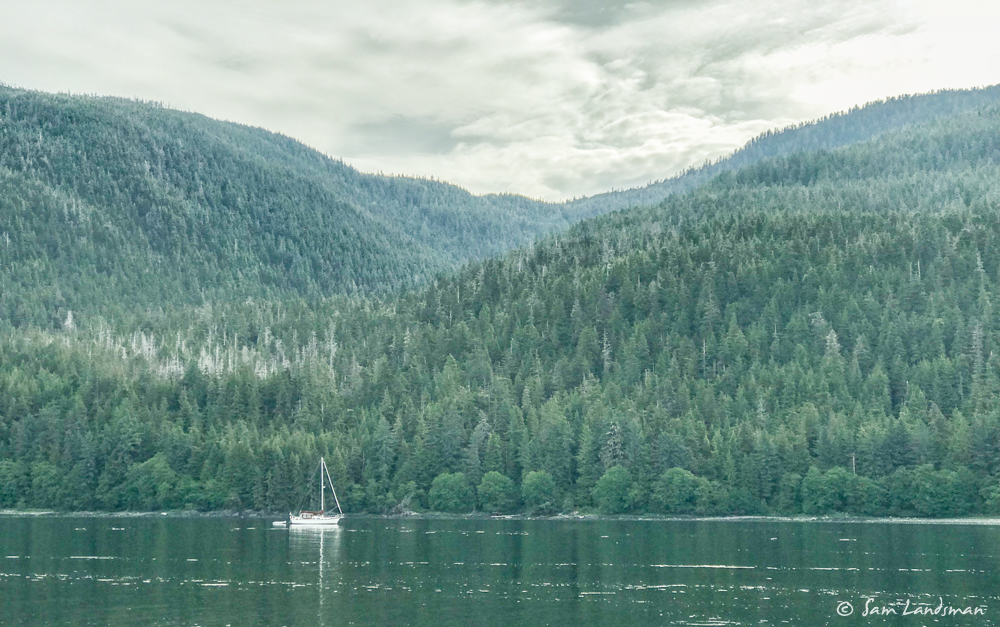 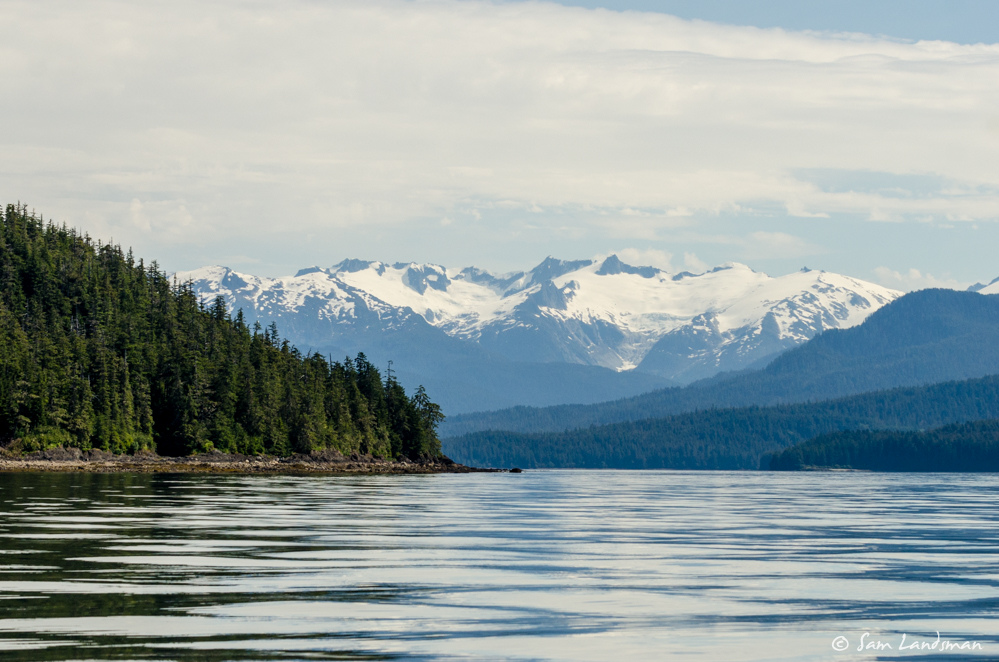 Farragut Bay was the next logical stop. I hadn’t visited since 2012, so it was fun to return. After cruising around a bit, I settled on a small cove on the east side of Read Island. Another beautiful spot! 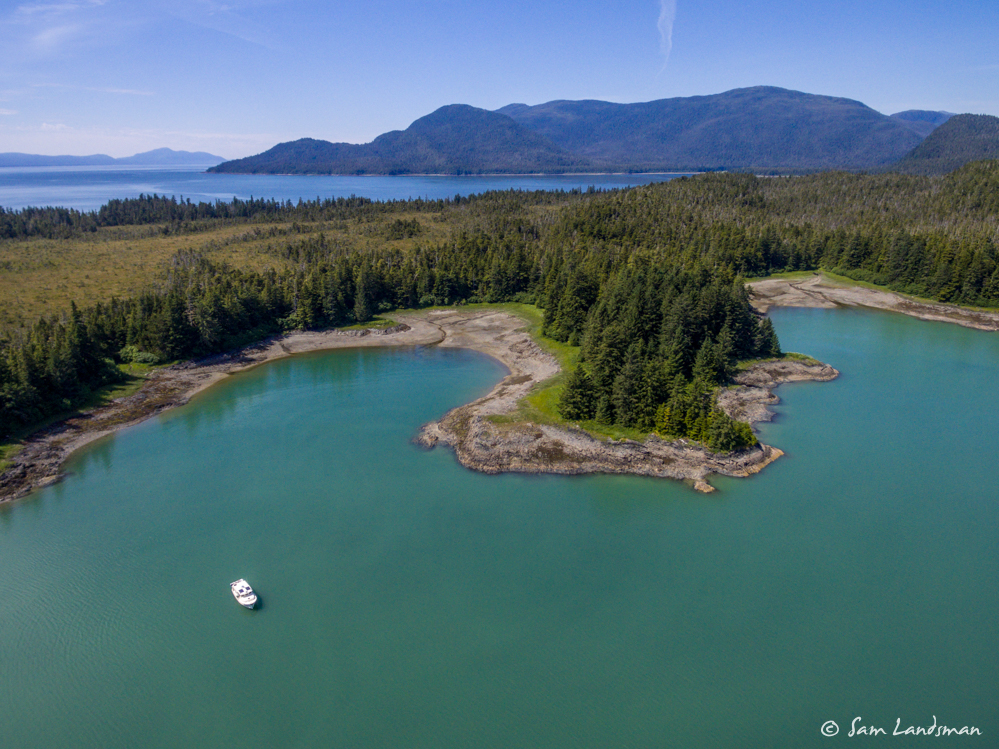 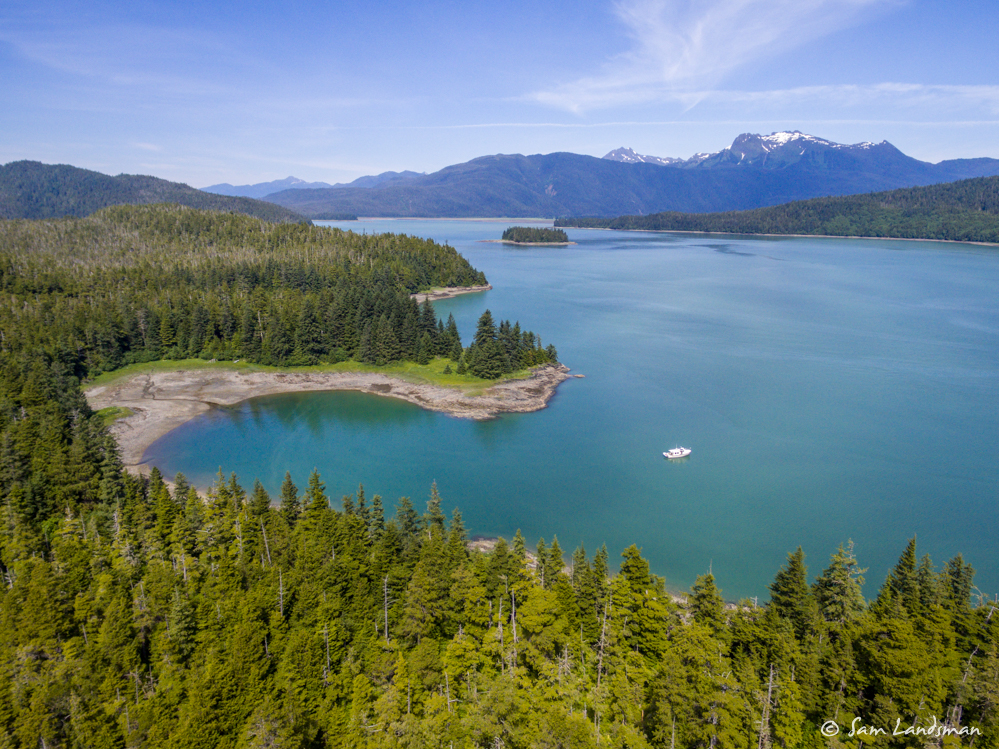 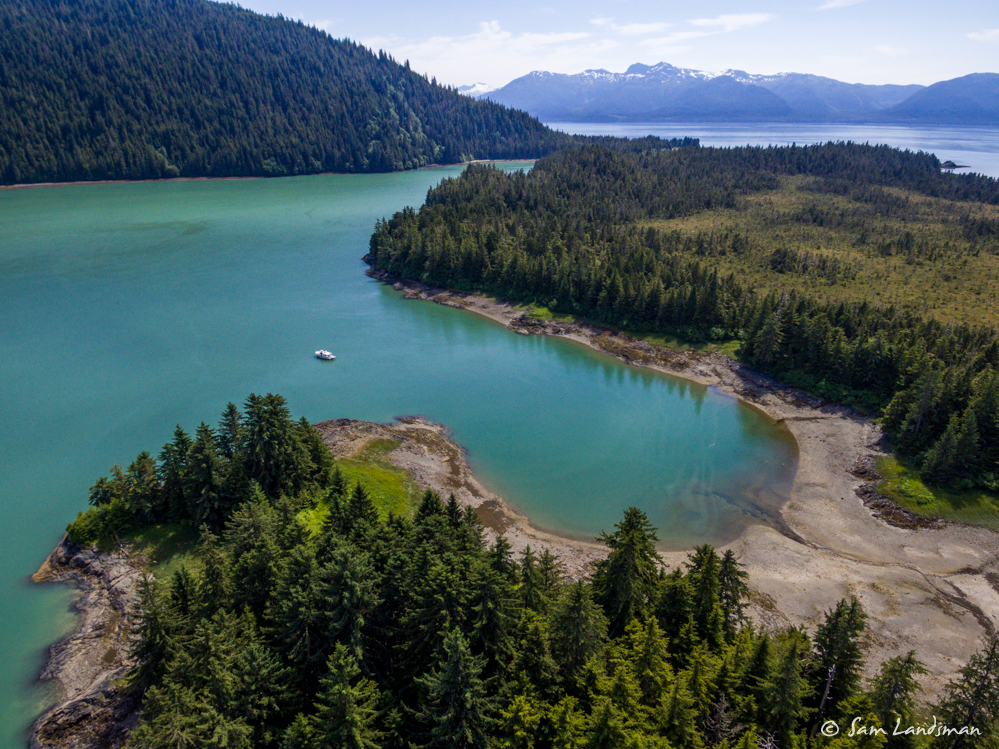 Finally it was time to head into Petersburg to catch up on chores and pick up Ben and Tiffany (my brother and his girlfriend). Next: where to go with guests when you only have two nights! 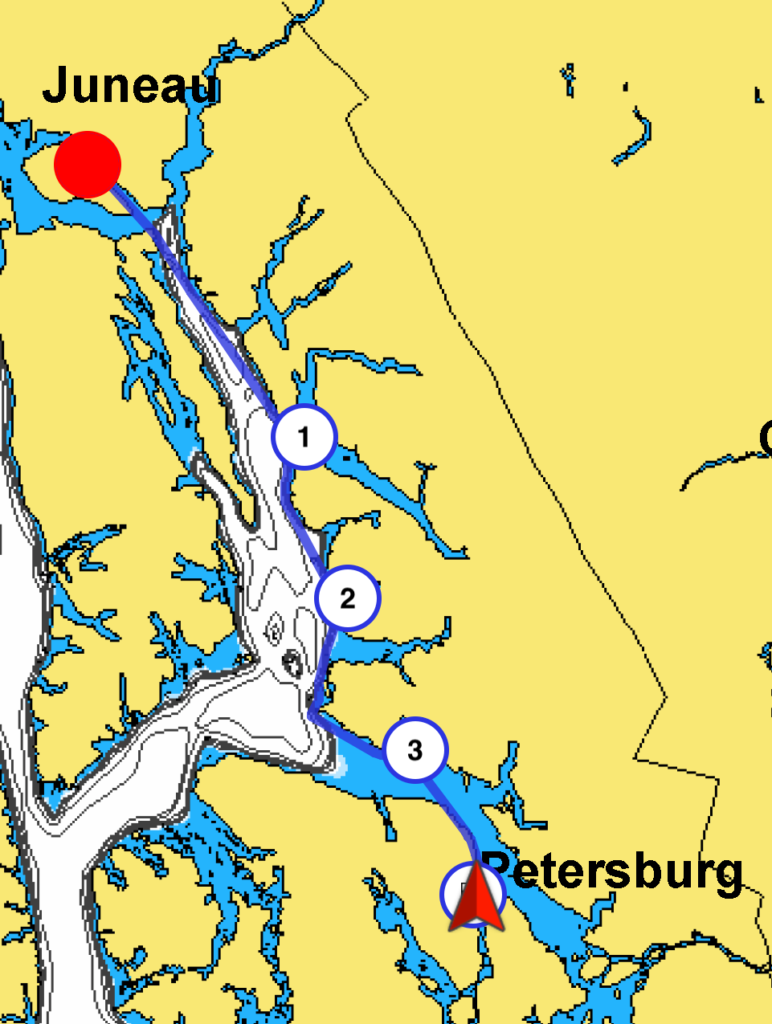