With Seymour Narrows behind us, the timing of our trip up Johnstone Strait was primarily about maximizing favorable current and miles covered. Thankfully the beginning of the ebb—which runs northwest in Johnstone Strait—was about 5:00 a.m., about the same time it’s light enough to spot logs in the water.

Complicating matters was the forecast, which called for winds building to 25-35 knots in the afternoon. Both Environment Canada and the ECMWF model agreed on this. The 20+ knot winds weren’t predicted to begin until after 10am, and with the favorable current, we figured we’d make it out of Johnstone Strait by then. We decided to reassess conditions for crossing Queen Charlotte Strait when we got to Blackfish Sound. Critically, all the predicted wind was behind us, and blowing the same direction as the strongest currents of the day, so despite the potentially strong winds, this wasn’t a typical “rough Johnstone Strait” scenario with wind-against-current.

The morning began with no wind and glassy water.

We picked up a nice boost from the ebb current, briefly exceeding 14 knots at a normal 7.5 knot cruise RPM and often cruising at 9 or 10 knots. The wind stayed under 10 knots for many hours. The biggest obstacles were logs, of which we dodged many. The most boat motion was caused by large eddies and whirlpools, which tend cause the boat to heel over, which seemed like a reasonable tradeoff for our excellent speed.

The wind was supposed to increase, and it did for awhile, but then it died off. As we entered Blackfish Sound around noon, waves were a foot or less and wind was under 15 knots. Herbert Island, the nearest weather station to Blunden Harbour, reported 17 knots of wind. The forecast conditions would worsen for the next few hours as we made the 20-odd mile crossing of Queen Charlotte Strait, but we bet they wouldn’t become too bad.

The bet paid off, and only the last 45 minutes or so was notably bumpy.

We all made it into Blunden Harbour by 5:00 p.m. and watched the rain fall and wind blow all evening. 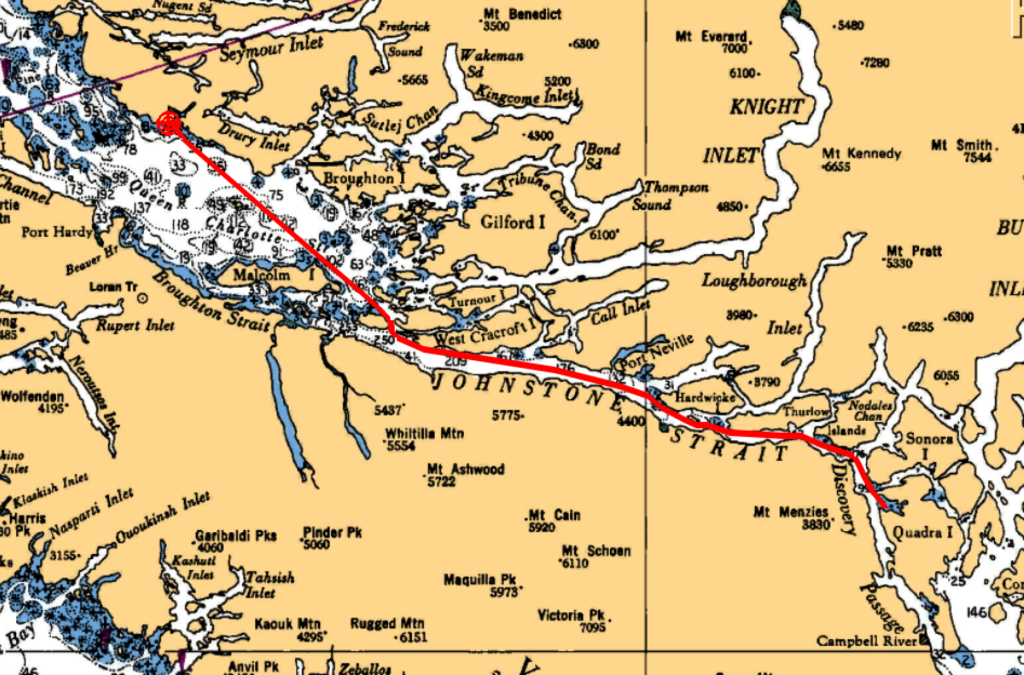