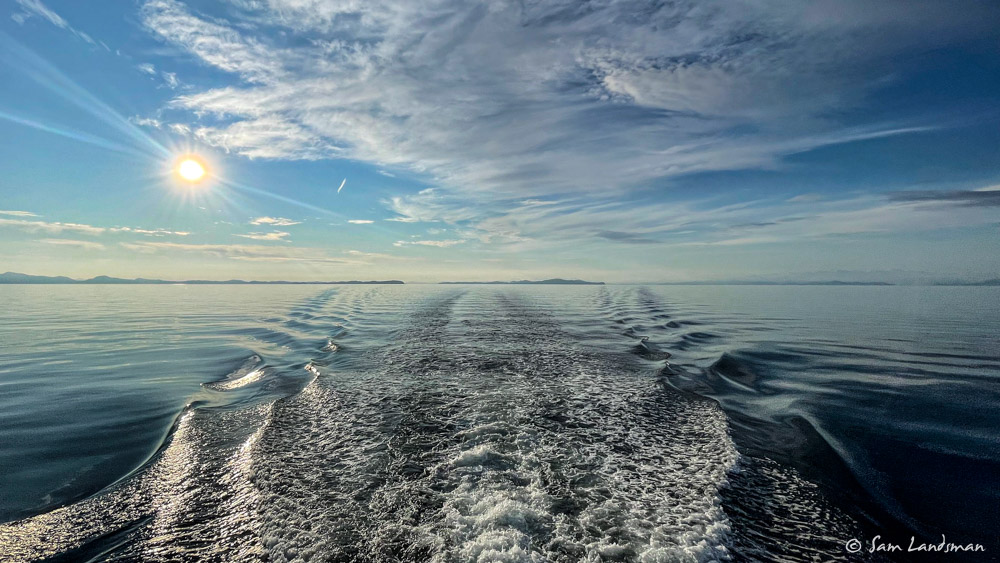 We really wanted to spend more time in Prince William Sound, but we were faced with a deadline a week and a half distant in Sitka. It only takes three days to get from Whittier to Sitka, but those days need to be good weather. The next few days looked pretty good, followed by at least five days of really, really bad weather. After that, there might be a weather window to sneak across that would get us to Sitka just in time, with maybe 12 hours to spare. But it was a long way out, and I didn’t think we could enjoy Prince William Sound fully while faced with the anxiety of a deadline.

For the trip back to Southeast, Ralph from Rubicon joined us. He’d not done overnight passages or crossed the Gulf of Alaska, so this was a good learning opportunity for him and having an additional capable crew member to stand watches is always appreciated. We just felt badly that within an hour of Ralph stepping aboard, we were underway for Southeast Alaska and we didn’t have time to show him any of Prince William Sound.

Our routing for the trip wasn’t certain, with the possibility that wind and seas would worsen considerably on the second day. The forecast called for generally calmer conditions close to shore, with the added benefit that, if conditions worsened, we could easily divert into Icy Bay or Yakutat to wait out any weather. Ralph really wanted to see Lituya Bay, so we set our speed to arrive during the flood, 47 hours later.

I was worried that Hinchinbrook Entrance, where Prince William Sound and the Gulf of Alaska meet, would be bumpy. Instead, we enjoyed a colorful sunset and gentle swell. 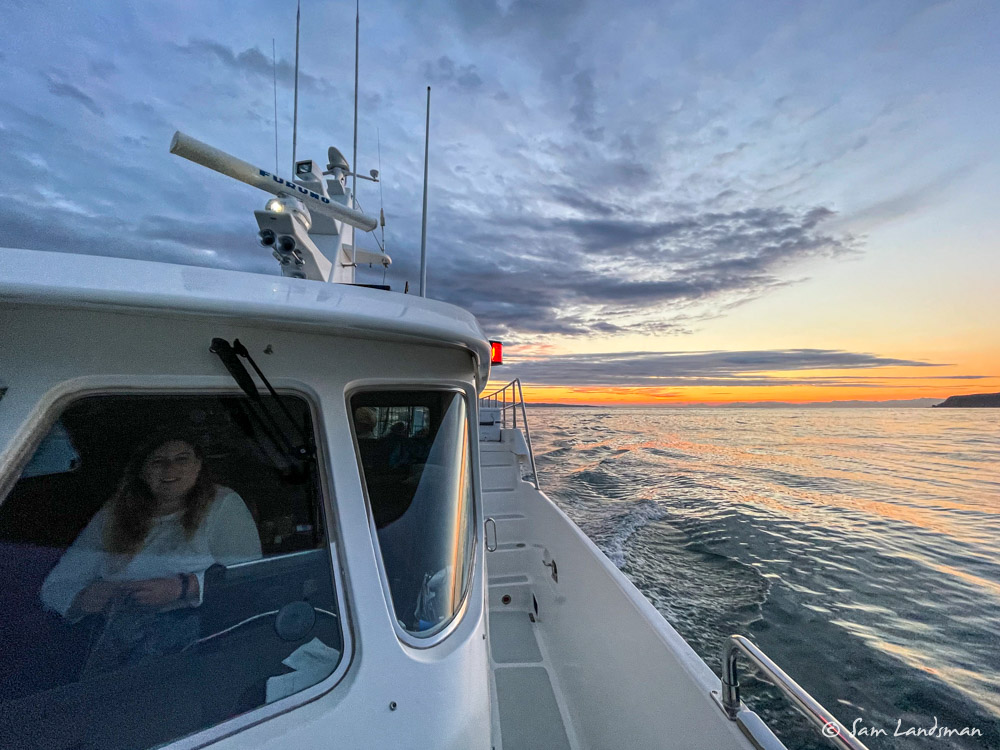 The first night at sea passed uneventfully and the morning dawned beautifully. We each managed to sleep at various points and nobody was forced to stand watch alone (unless they wanted to).

Watches were pretty boring. With hardly any traffic, little flotsam, and no unusual indicators from any boat systems, the watch stander really just watches the screens. The Lugger ticked over faithfully at 1700rpm, pushing as between 8 and 8.5 knots. There seemed to be a slight current against us, but not much.

The days were significantly shorter than they’d been on the trip over, just three weeks ago, so we spent more time running at night.

The weather was clear for the first day and a half and the mountain views did not disappoint. Below is what we saw passing Icy Bay, and it makes us eager to come back sometime to explore further. 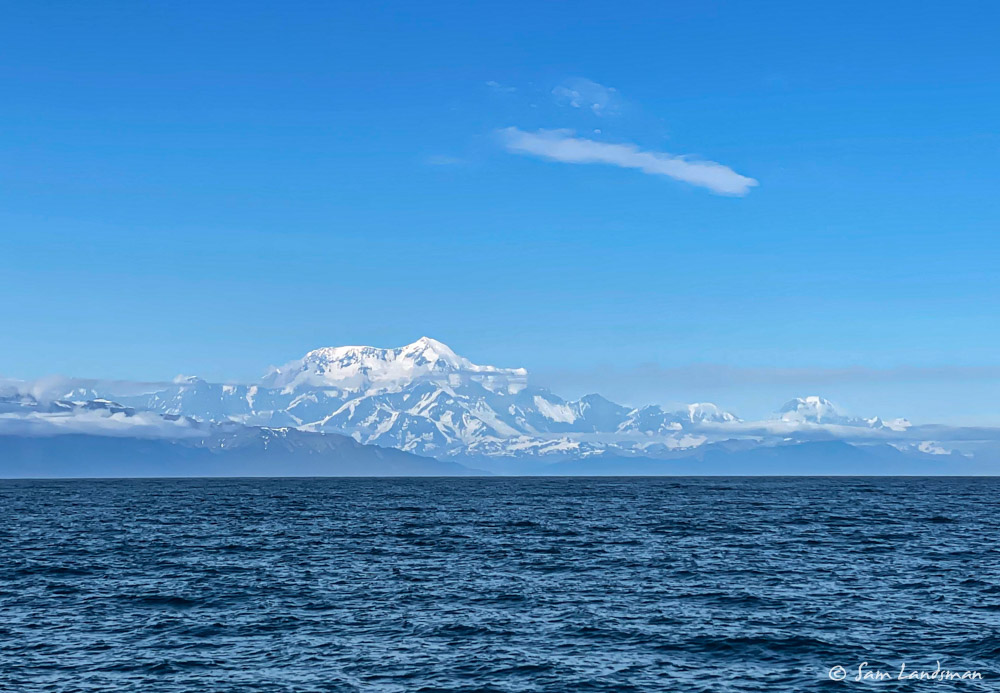 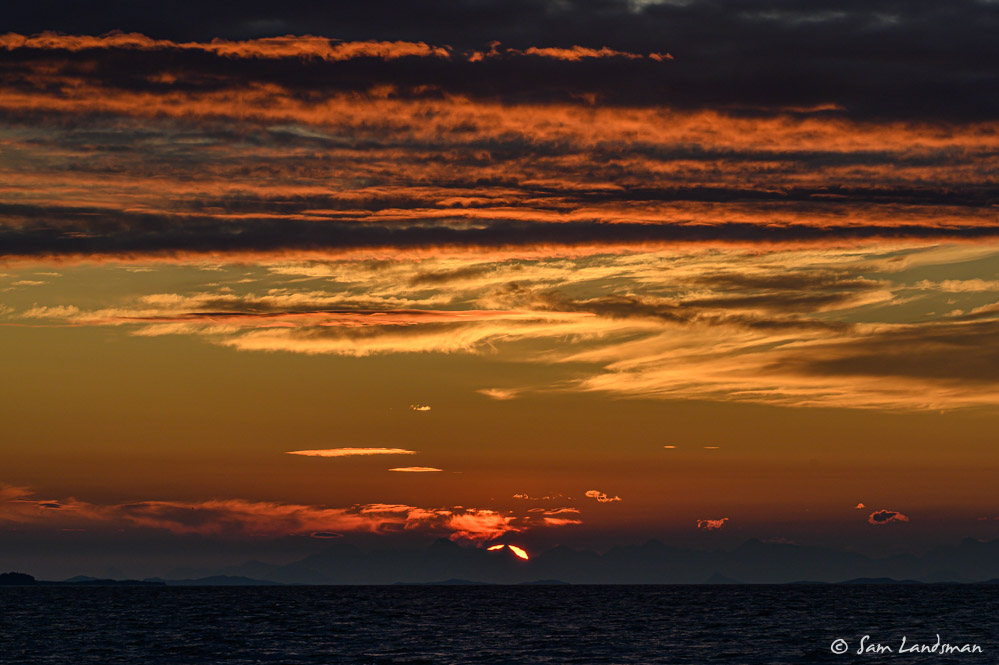 The second night, the views were gone, replaced by heavy rain, but not much wind. The spotlight casts an eerie beam into the abyss. 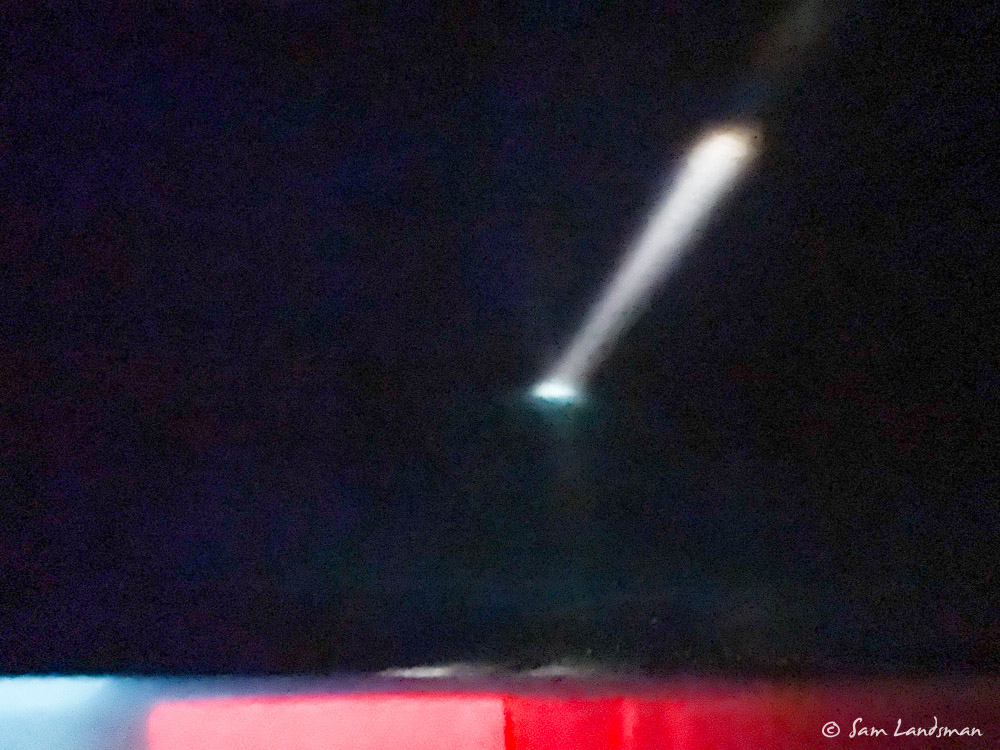 Having been into Lituya Bay before, entering again was much less nerve-racking. We went in during a several knot flood with no problems. Despite the pouring rain, we got a few glimpses of the mountains. 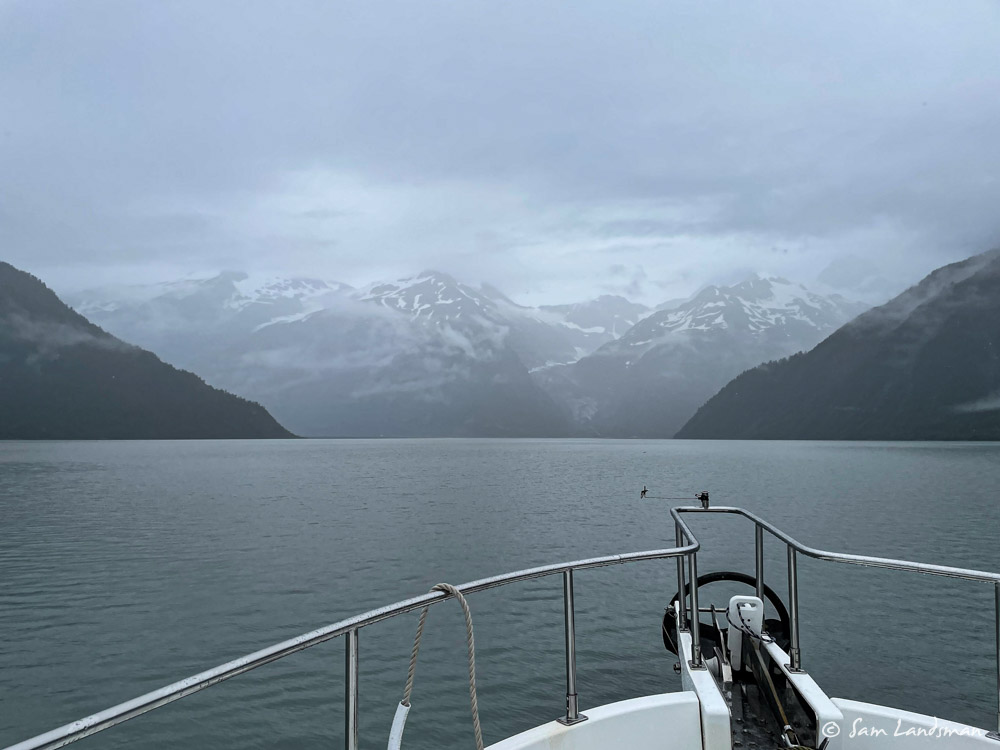 Originally we planned to spend the night in Lituya Bay, but by the time we got there, the weather forecast suggested a quick stop was the more prudent option. Even so, the 60nm from Lituya Bay to Southeast were the worst of the trip, with 20 knots of wind and confused, lumpy seas. Akeeva shouldered aside the seas, but we were all grateful to turn into Cross Sound and feel the conditions calm that evening. We were even more grateful to find an empty dock in Elfin Cove, where we tied up, walked around, and ate a proper dinner for the first time in several days.

Now that we’ve made the trip across the Gulf of Alaska, we’ll surely do it again. We feared that Prince William Sound would be much like Southeast Alaska, that the reward for the effort of getting there wouldn’t be high enough. Our fears were unfounded; Prince William Sound exceeded expectations. Our only regret was not enough time. Next time, we’ll have months rather than weeks, and we’ll continue to Kenai Fjords and Kodiak Island, too.