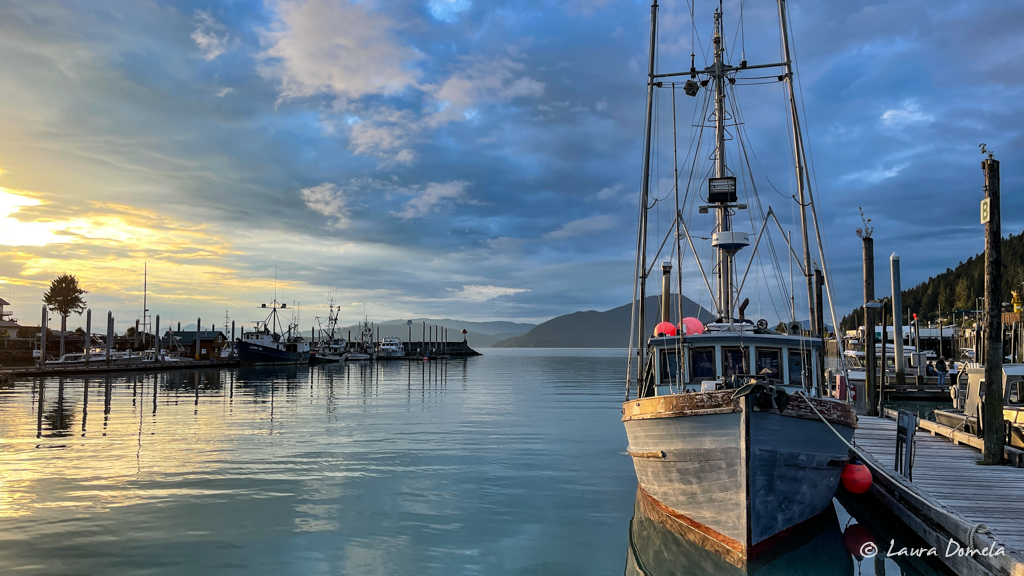 After leaving Red Bluff Bay we cruised over toward the north end of Rocky Pass and anchored in a spot called Stedman Bay. It’s shallow and quiet and we saw no other boats. We dinghied around a bit and saw deer, a large group of harbor seals hauled out on a nearby spit, and some otters. We had a nice dinner of fresh spot prawns dipped in garlic butter, a side of leftover rigatoni in red sauce, and a caesar salad.

The Kp index was high for seeing the aurora borealis, so several times in the night we got up to check for ’em. Once there was a small vertical line of green, but not enough to really write home about. So instead I took this photo of the dipper with my iPhone. Amazing. 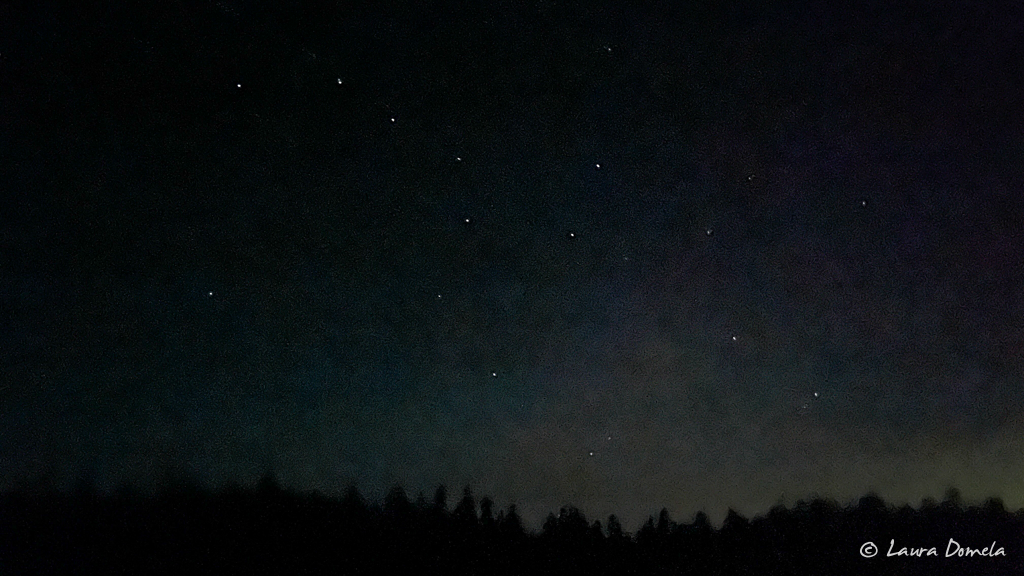 In the morning we were greeted with a bunch of fog…always nice for transiting a narrow, winding, shallow, rocky pass. It did look like sun behind the fog, so we were pretty sure it would be burning off over the course of the morning. 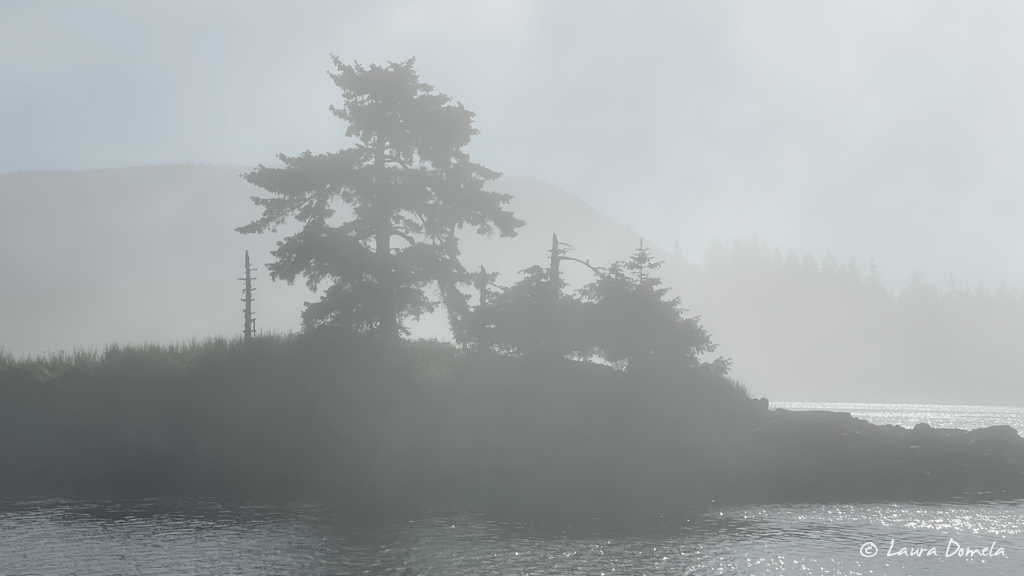 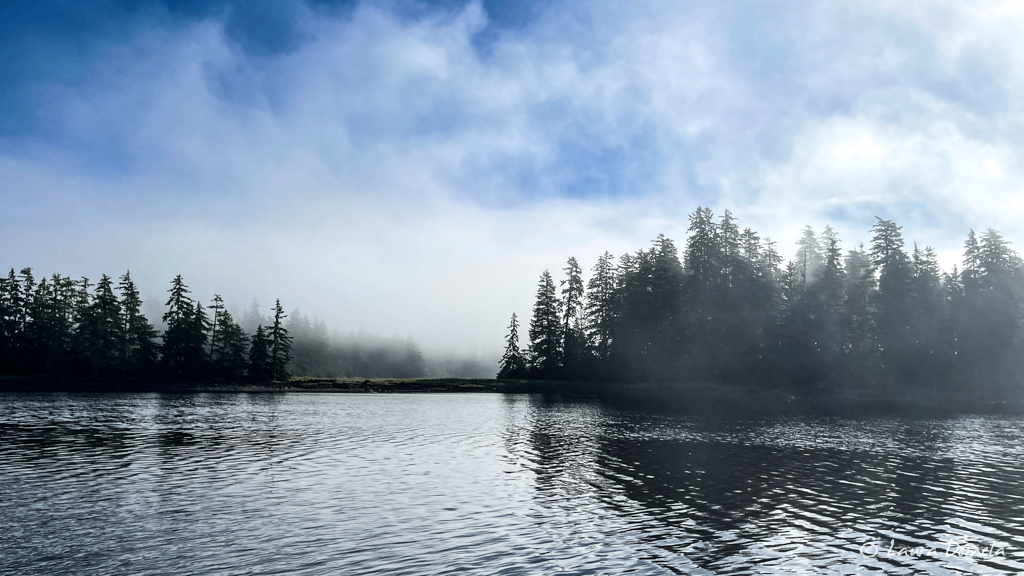 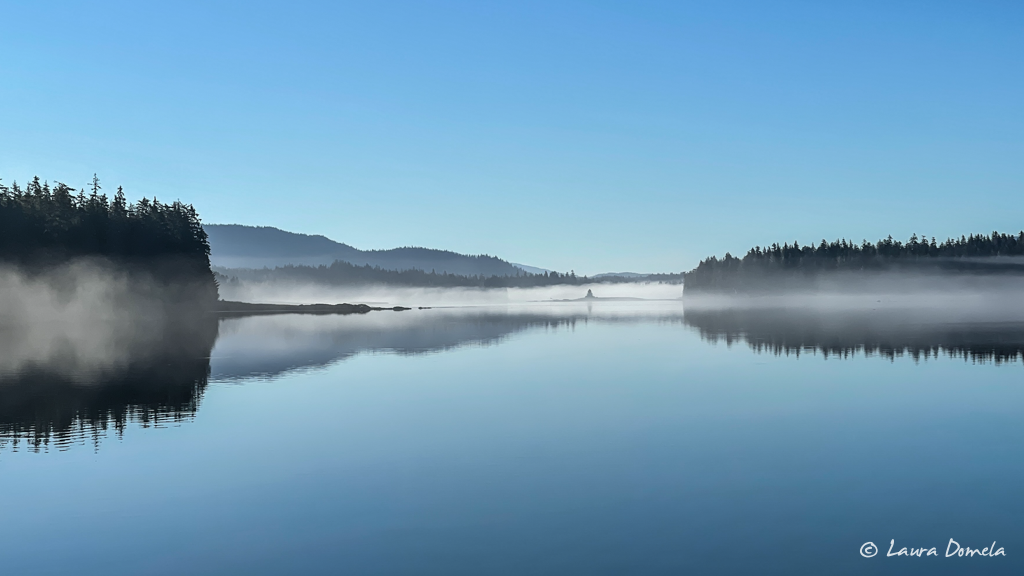 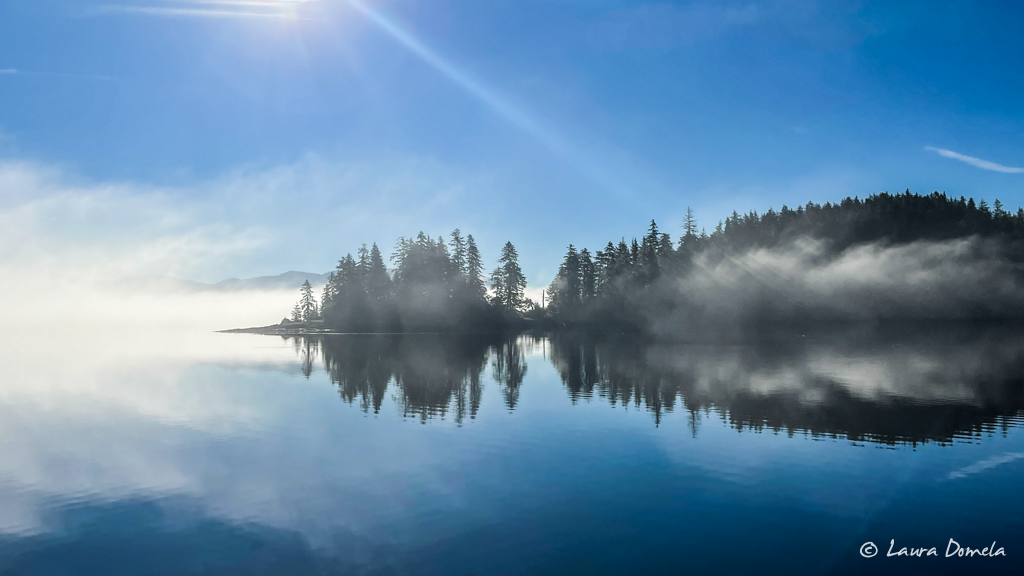 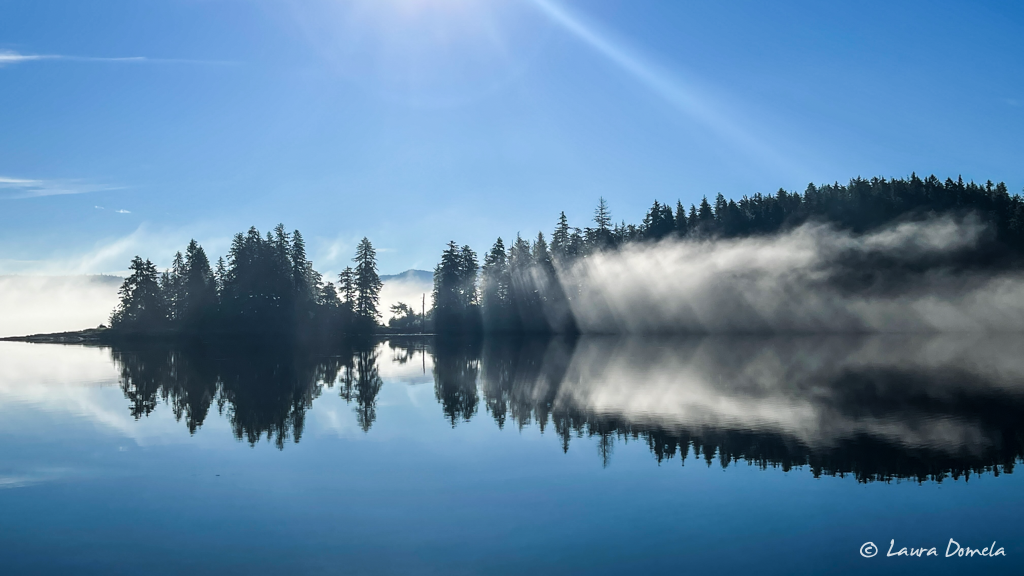 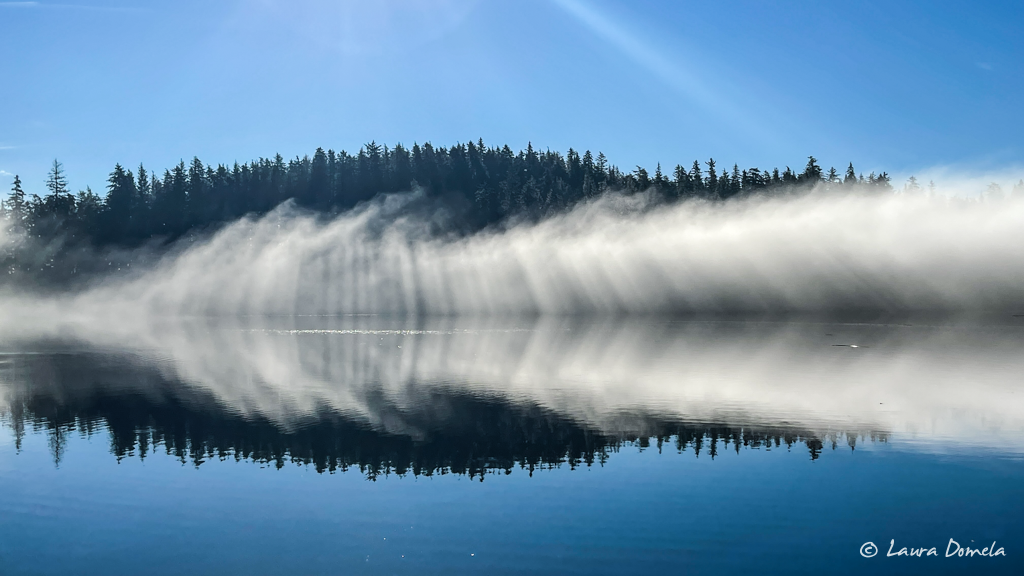 Rocky Pass is definitely a piloting challenge, and several markers were missing. Once, I stopped to double check (okay triple check) that we were heading the way we were supposed to be (we were) but it’s not a pass to be texting your mom through, that’s for sure. Here’s what it looks like on Navionics: 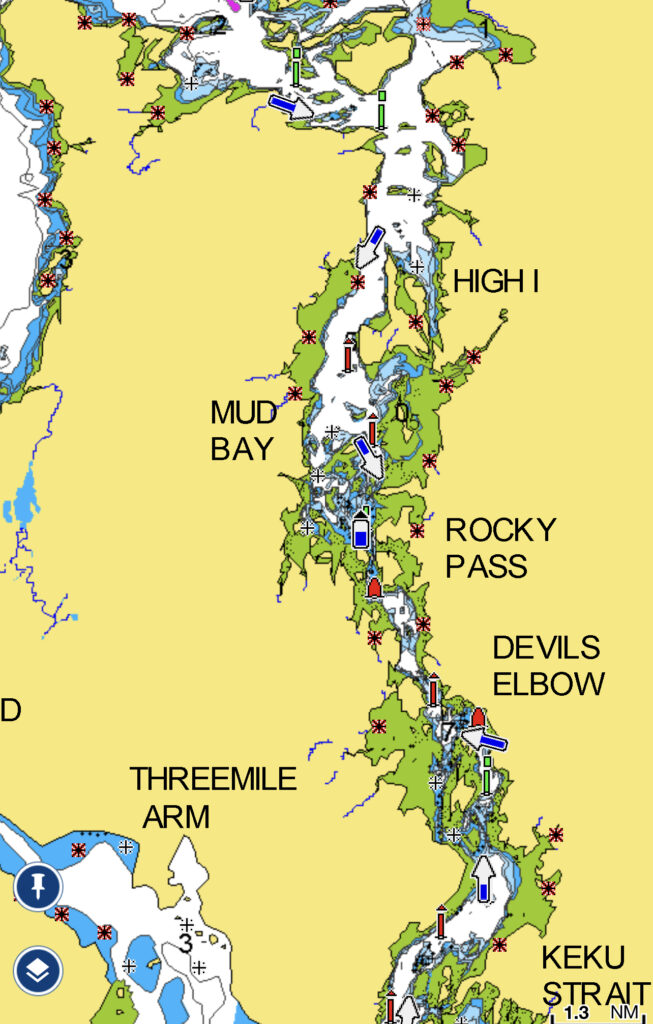 We saw a few (and had to stop for one) humpback whales as we entered Keku Strait and Sumner Strait and then across to Point Baker. There was plenty of room on the dock and we decided to stop for the night. 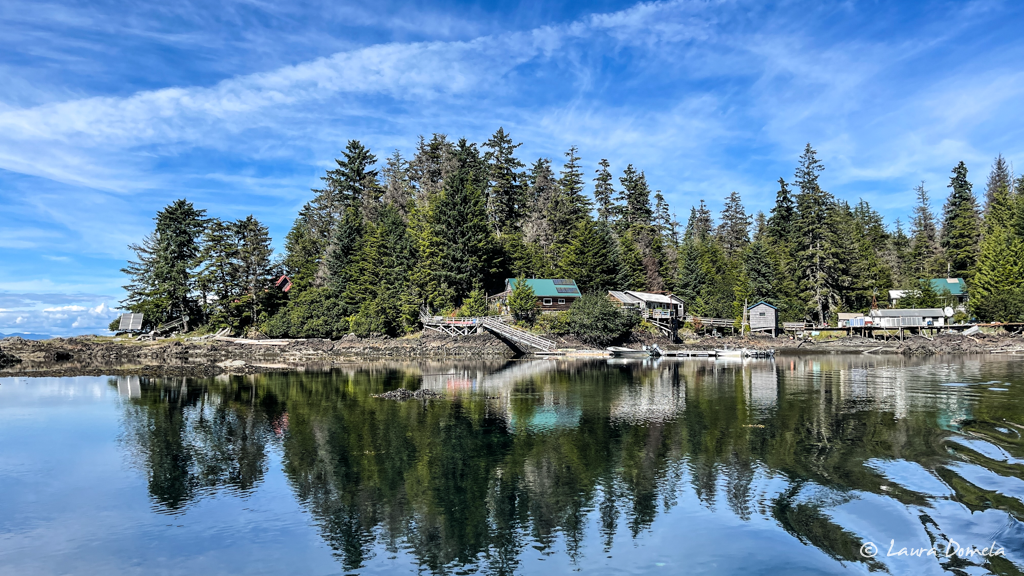 We spent some time talking to Judy, the woman who owns the floating cafe/pub/liquor store/laundry/gas/bunkhouse buildings (plus a main residence). Judy’s husband Herb died three years ago and she has listed the property for sale, by the way…photo below of the realty company sign/phone number if anyone is interested! Judy had the store open, so we replenished our cooler’s supply of cold beer. She warned us it was too expensive, but we figured we could afford to splurge on expensive beer while taking up space on the free dock. One six pack of Denali Brewing Single Engine Red ($15) and one six pack of Corona ($17). 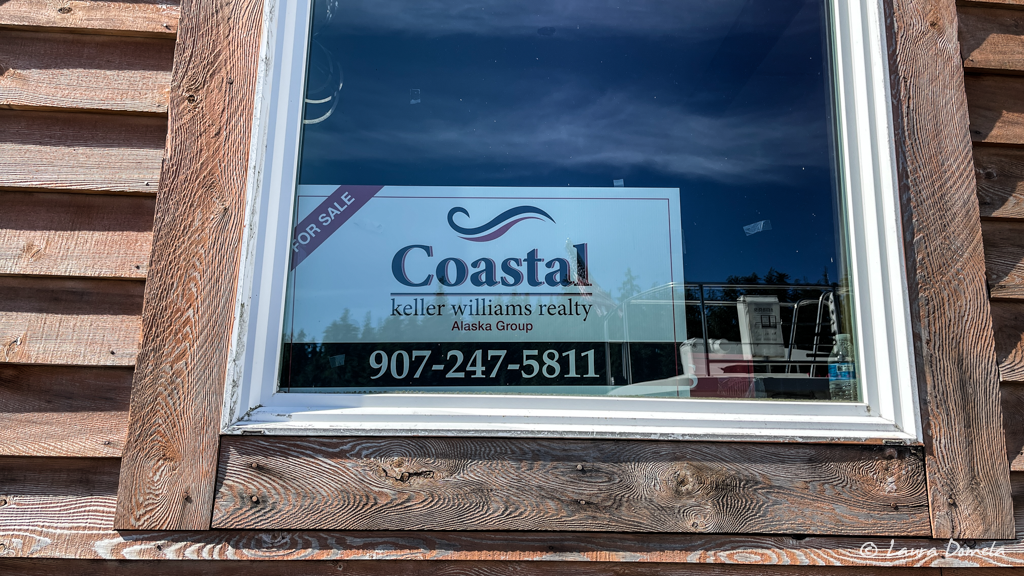 We walked down to the end of the dock to take a look inside the community building. 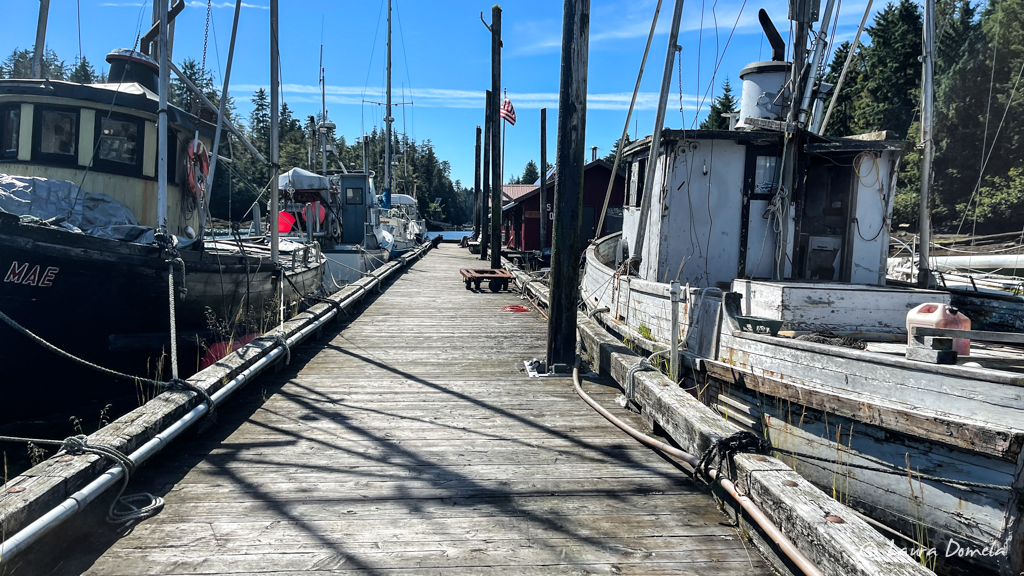 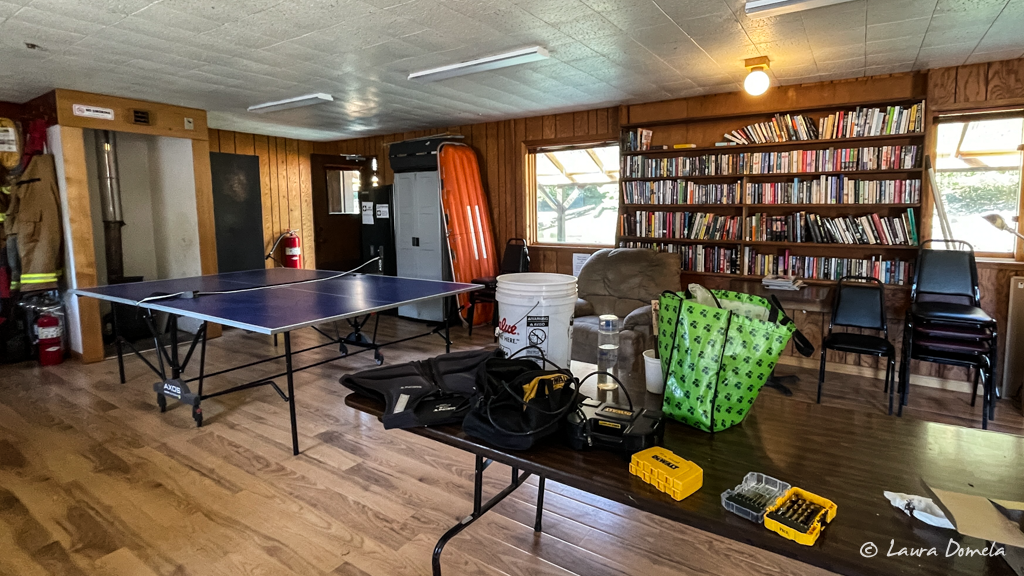 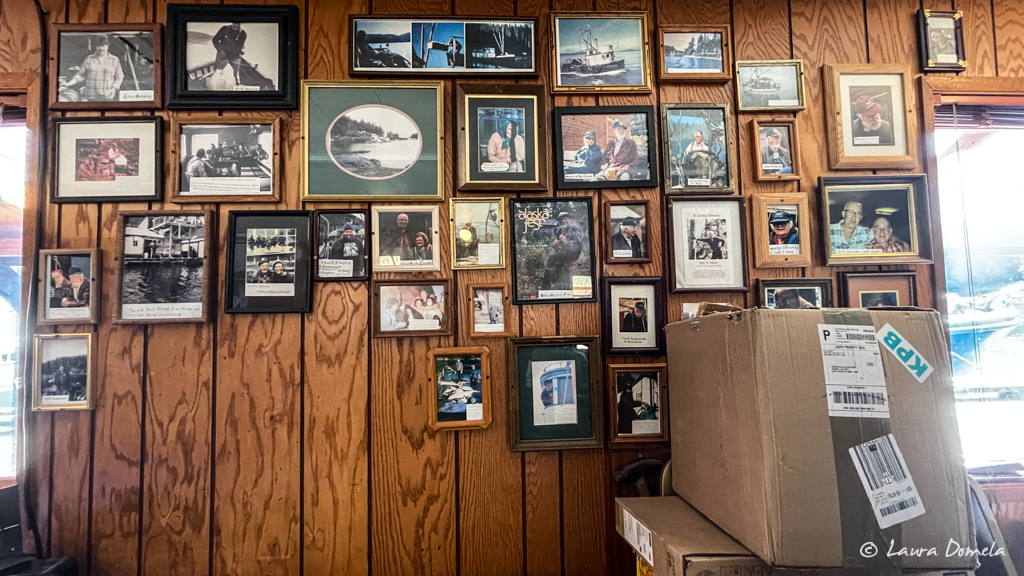 If anyone watches the NatGeo show Port Protection, you’ll notice the little sticker in the window of the post office here: 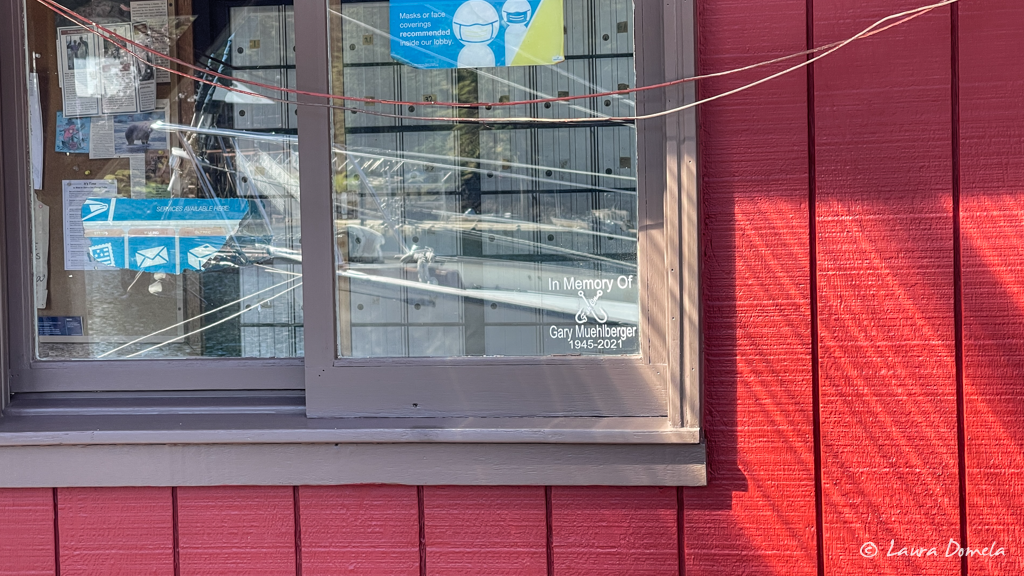 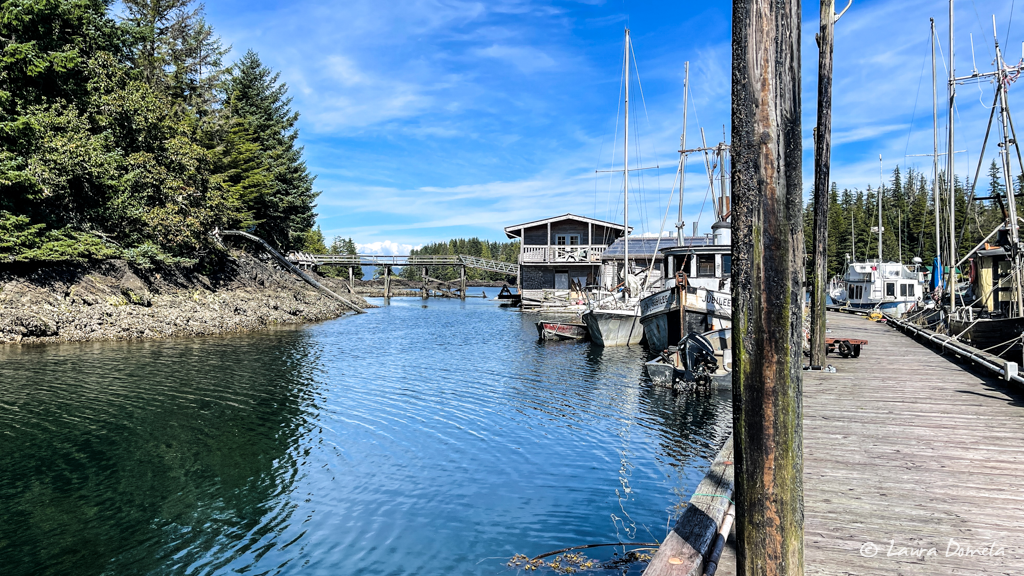 We launched the dinghy and went to explore the back bay and Port Protection: 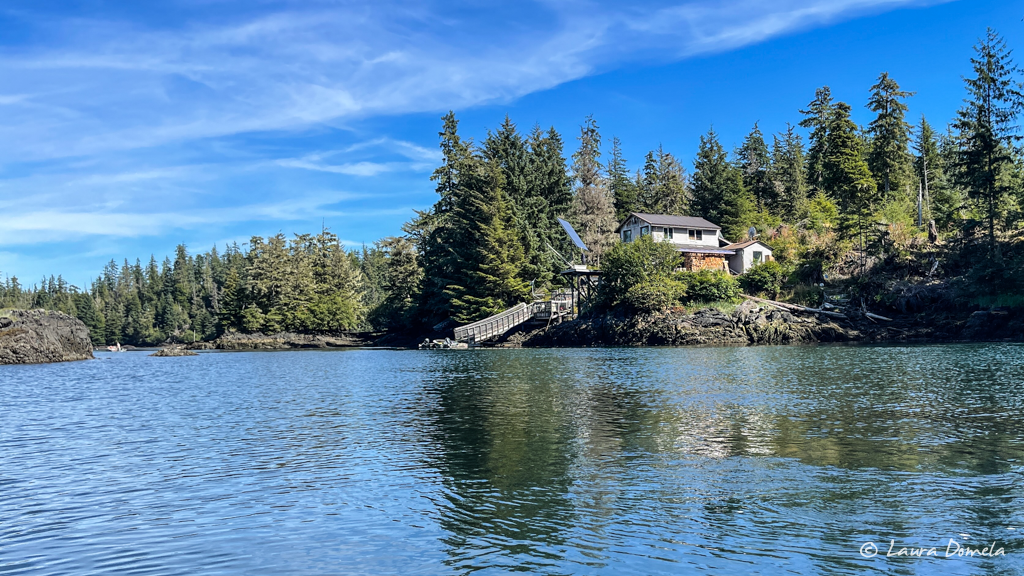 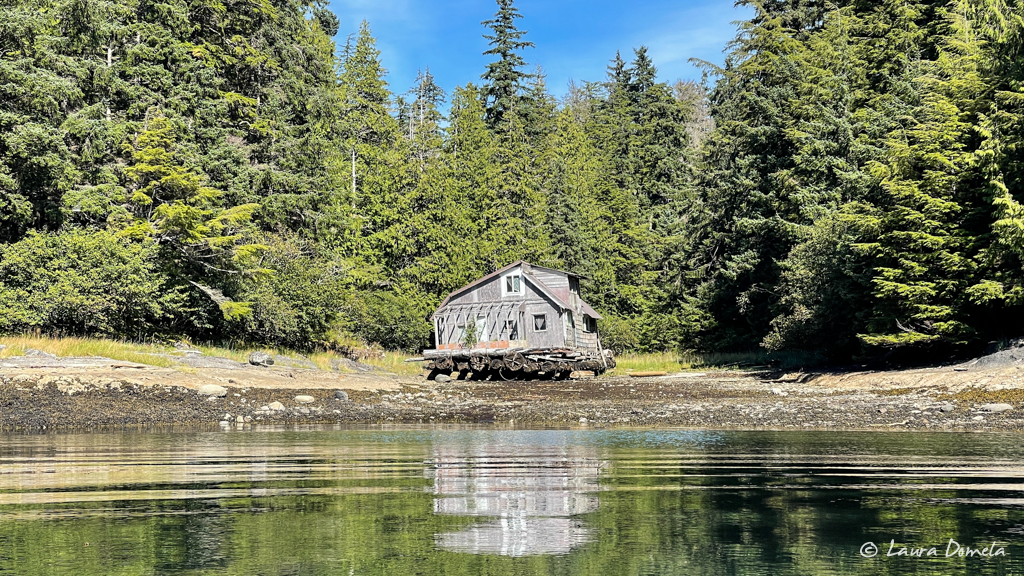 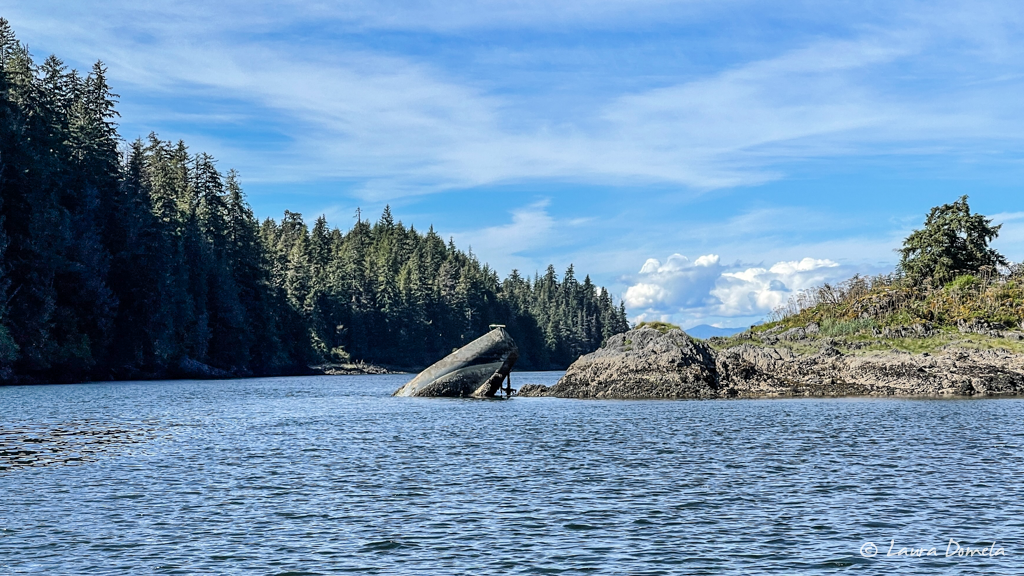 By skiff or dinghy, you can go south out the back way from Point Baker and down to Port Protection, which is just what we did. Here’s a screen grab of the chart if you want a visual: 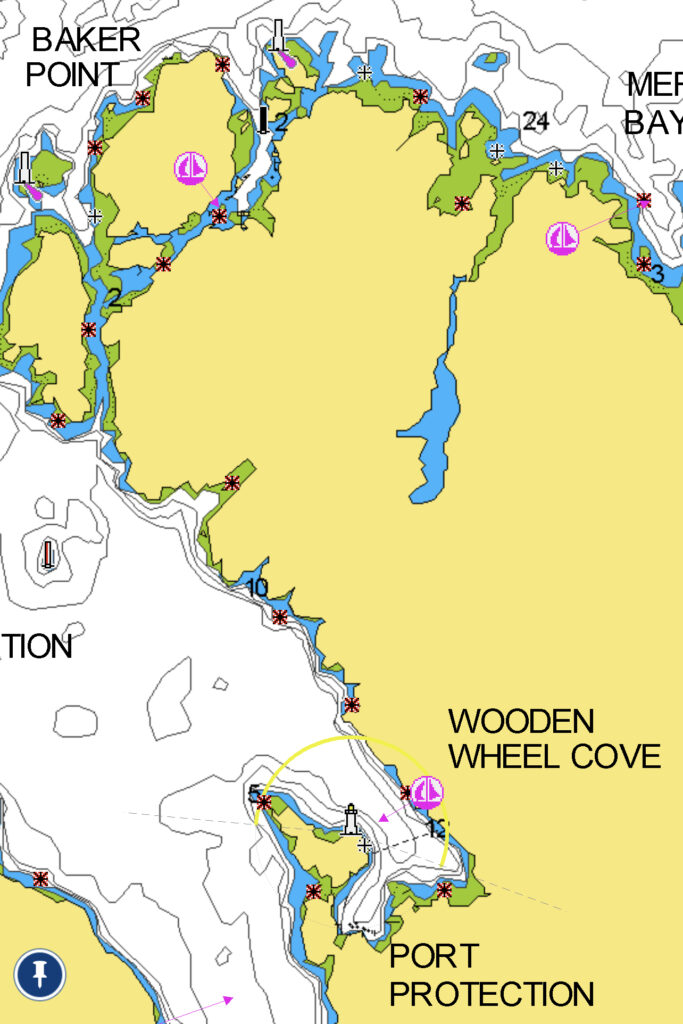 Mount Calder in the distance: 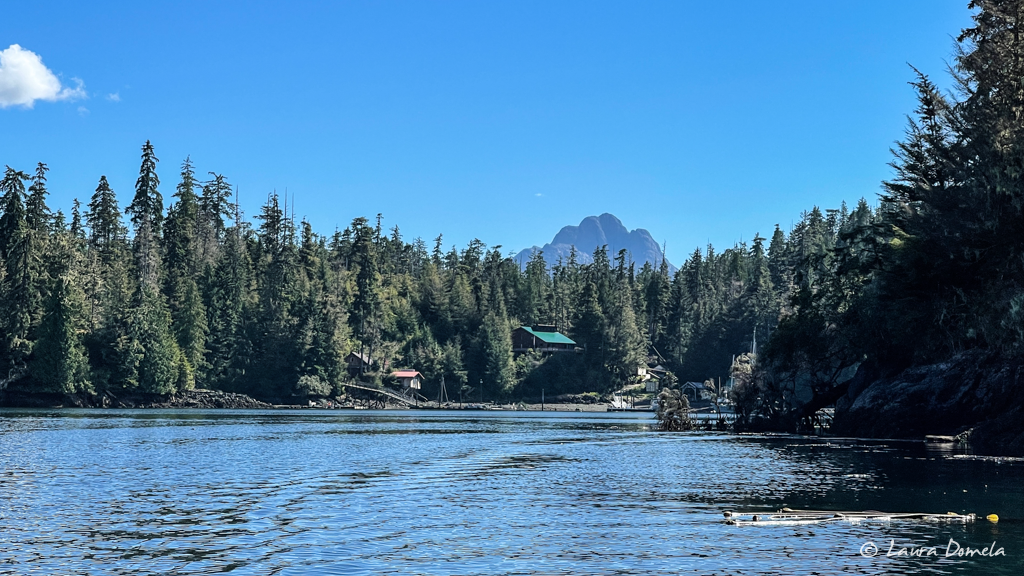 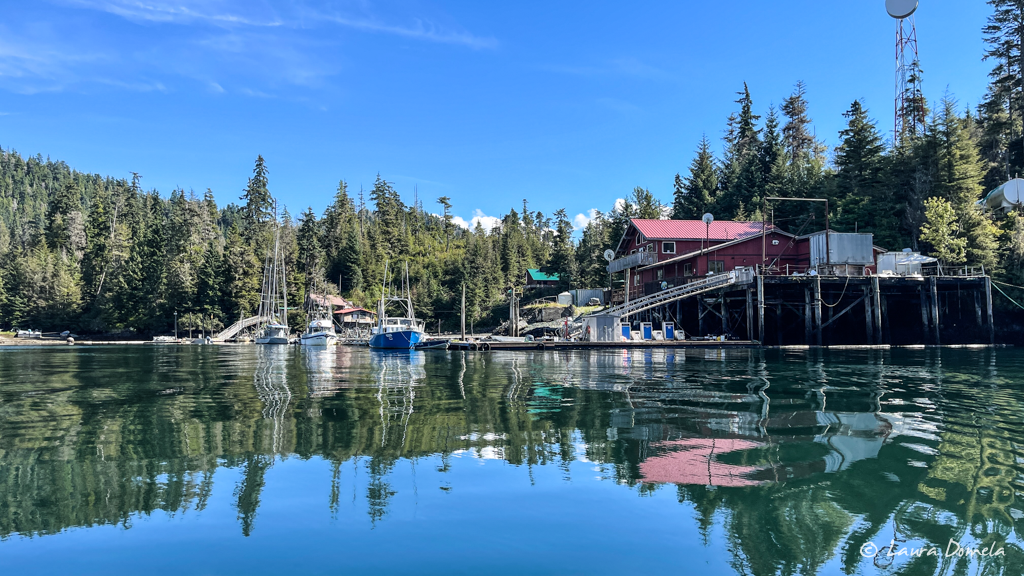 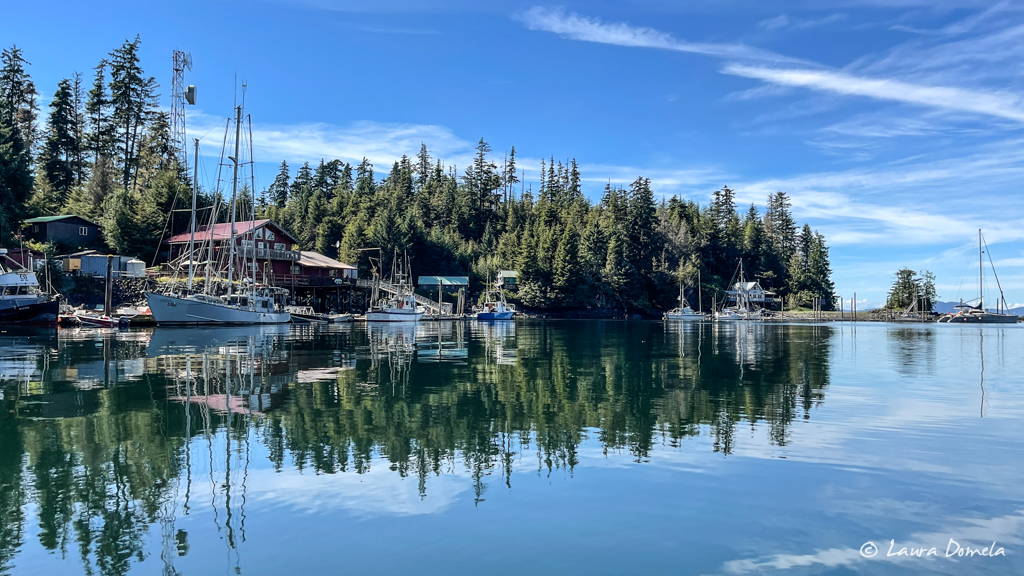 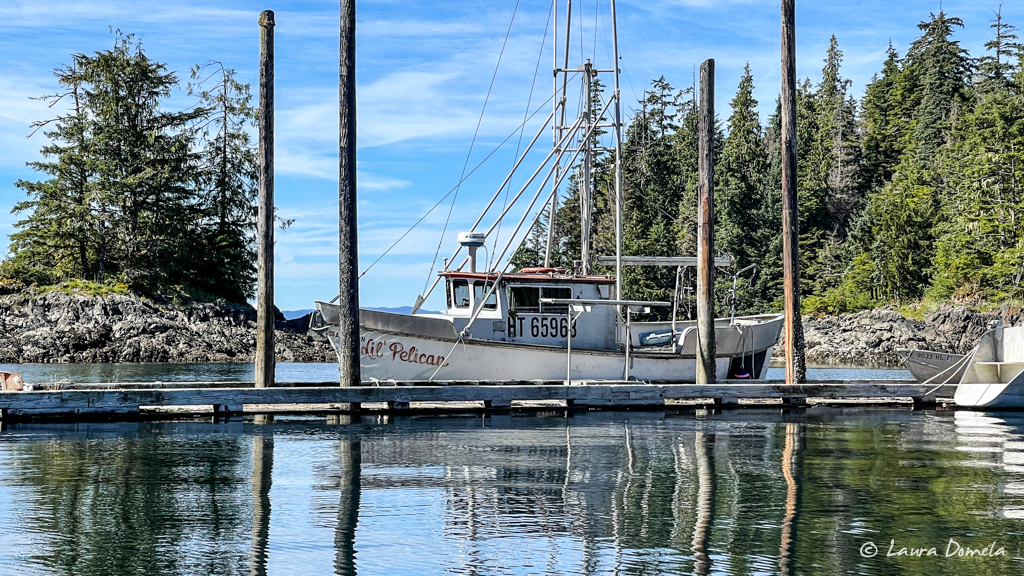 When we got back to Airship and Point Baker, there was a gill net boat on the dock behind us, owned by a super nice guy named Cliff, who we ended up chatting with for quite a while on the dock. Cliff came down from Petersburg, where he lives, and was bringing Hans Porter (from Port Protection) some crab. He offered some to us and after a little arm-twisting, we accepted two nice ones and traded three cans of cold beer we’d just purchased from Judy’s store.

For dinner, we marinated and then grilled up the rest of our spot prawns, shared one of the crabs we got from Cliff, and had a caesar salad on the side. I took Cliff a small bowl of prawns and a bowl of caesar salad. So much fun to share the awesome fresh caught bounty! 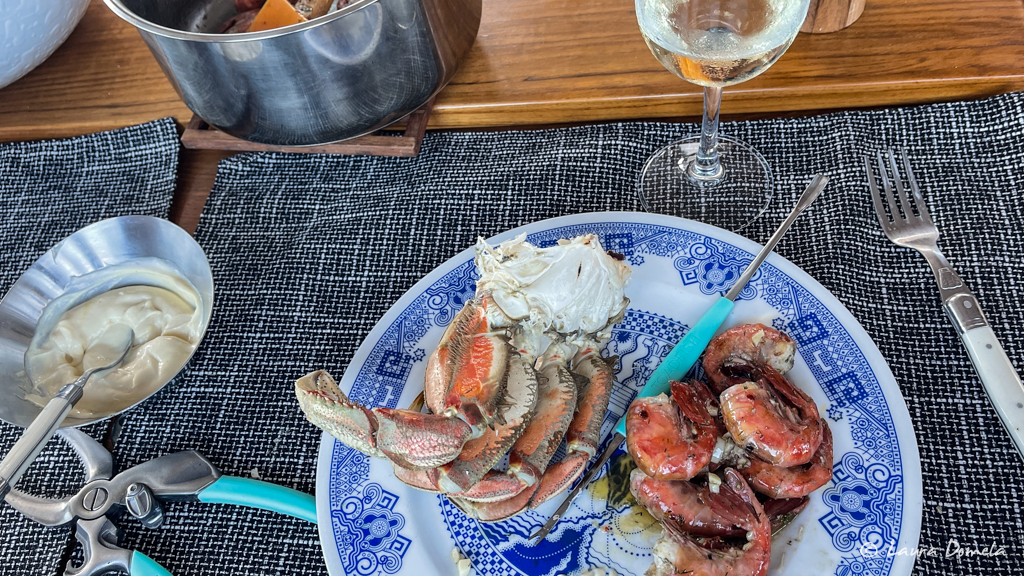 In the morning, we hung out on the chatting with Cliff for another hour or so before we left. He told us about a couple good fishing spots nearby, and we shared some gossip about people up here we both knew. Fun stuff!

We left the dock and cruised east to Red Bay, where there were two humpback whales hanging out at the entrance. 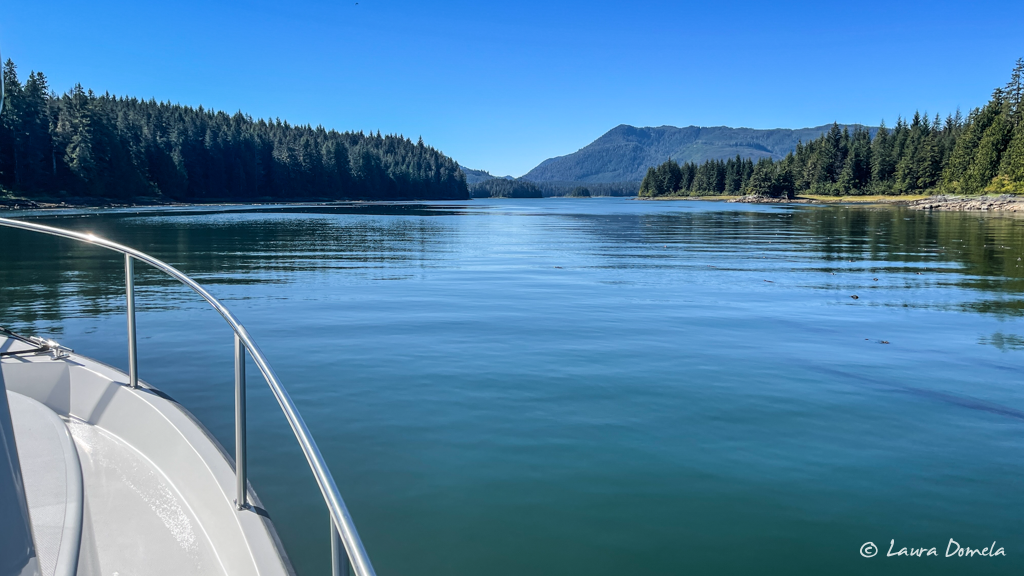 We’ve been in here before and anchored all the way at the head of the bay, but this time we went in just to the Goose Creek Anchorage. We dropped a couple crab traps, got the dinghy set up with the downrigger and rods, and went back out to the entrance to fish for coho. Couldn’t ask for more amazing weather today! The thermometer on Airship said the outside temp was 79 degrees! 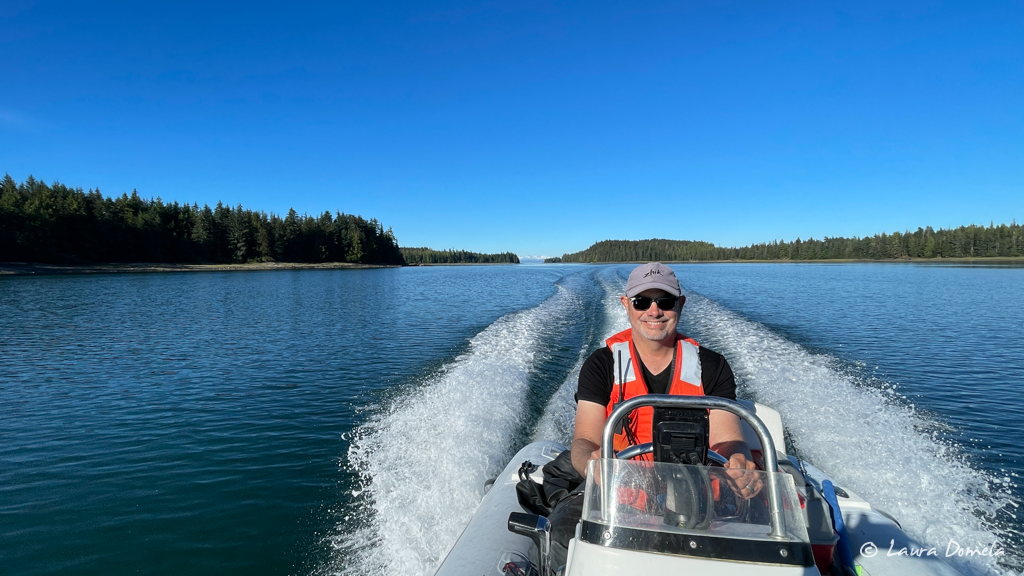 I caught the first one (27 inches) and Kevin got the next one, slightly smaller, but both bright and super feisty! 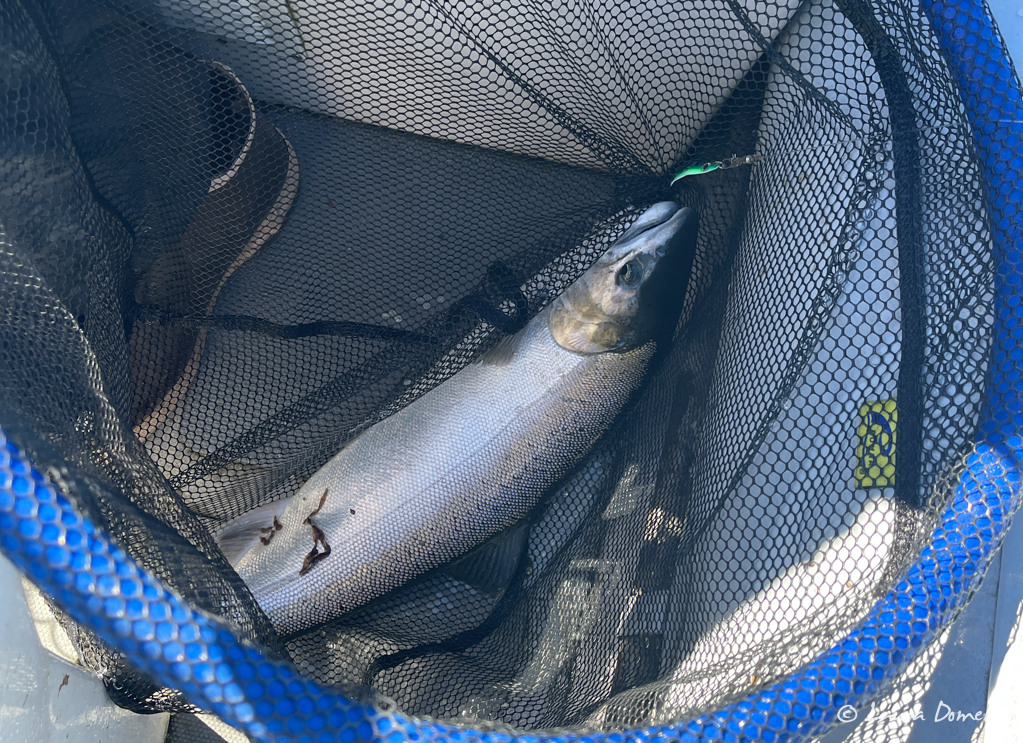 We lost one as it jumped out of the net and off the hook, but it was pretty small anyway. Toward the end of the day, maybe near 5pm, a boat came speeding right at us, and we figured either they didn’t see us or it was fish and game coming to check our licenses, etc. It was the latter. They pulled up alongside us and we tossed them a line and showed them our fishing licenses (and our two salmon). They first asked us where we’d come from…which I can see now was a good question. Here we were in this little inflatable boat out with a handful of charter boats in Sumner Strait, many miles from the nearest port… probably looked kinda funny. We told them the big boat was anchored in Red Bay, etc., and had a fun chat. Eventually, they looked at each other, shrugged, and asked us if we wanted a lingcod. Seriously? Um, sure! They said they’d confiscated it and didn’t have a way to keep it onboard and were too far from where they would donate it (or something like that), but that it looked like we might not have room for it in the dinghy. It was 47 inches!!! A monster! I pulled up my legs and sat in the bow, and they layed it on the floor of the dinghy and I wish wish wish I’d have snapped a photo of how this all looked, but I didn’t. Here it is back on Airship, overflowing the fish cleaning table:

Oh and the troopers gave us one of their business cards with a note on the back that they gave us this fish as a gift, in case somehow we got caught with an illegal lingcod by some other fish and game guys.

We filleted our salmon and then attacked this big ling cod, which was not an easy job, but we got it done. We probably have 10 meals for two out of this guy!

For dinner we grilled up some of our fresh coho and served it with some miso butter bok choy (and a cold expensive Corona). Super delicious! 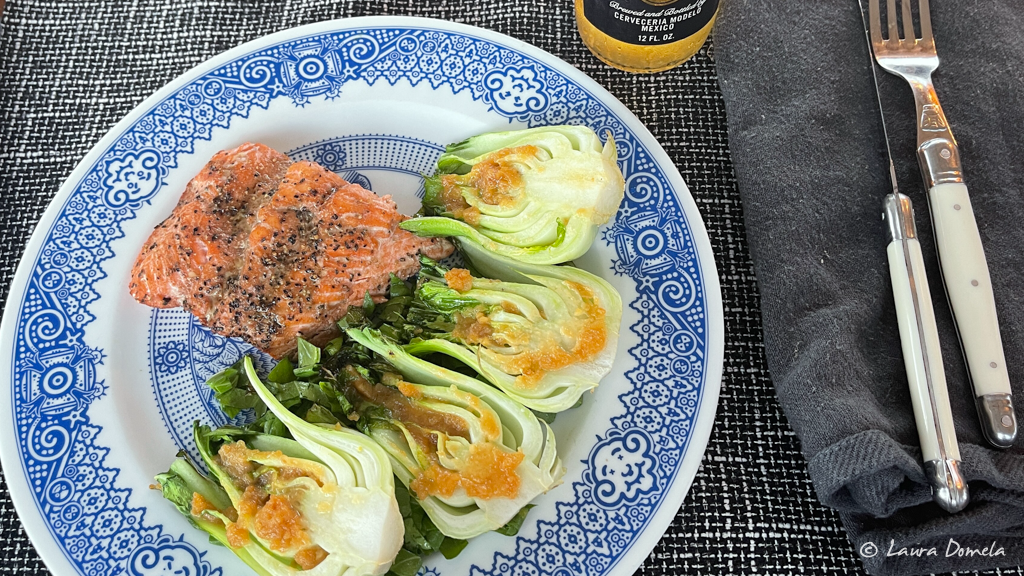 In the morning, we pulled our crab traps and had two big keeper Dungeness. Score!

We left Red Bay and headed for Wrangell. Not quite as sunny today as it was yesterday, but beautiful. 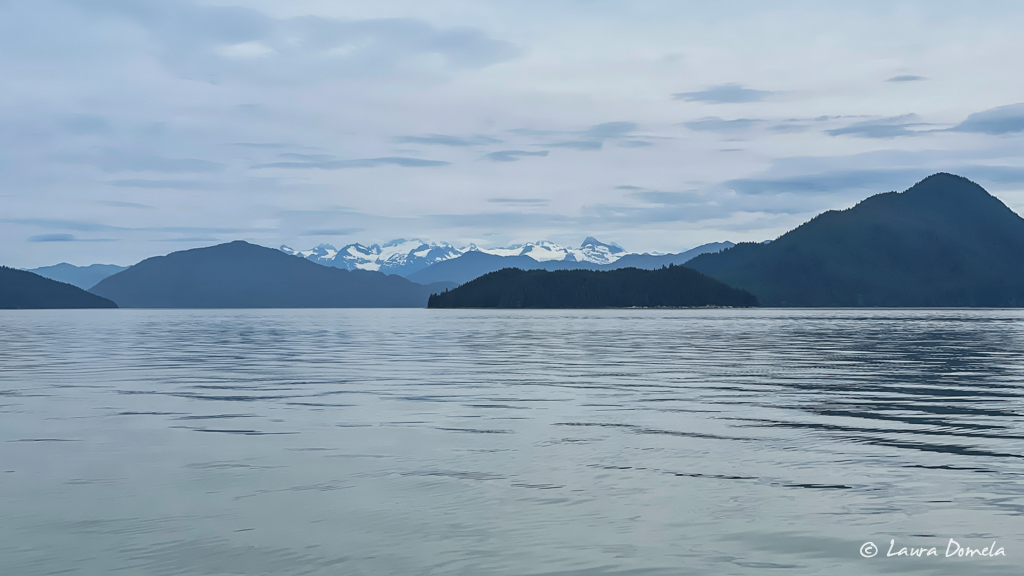 There was plenty of room on the Reliance Float in the downtown harbor, so after we tied up we walked to the market to re-provision and replace one of the downrigger clips I accidentally lost overboard.

We grilled up some fresh lingcod and had fish tacos for dinner. Tomorrow we’ll pick up the grandkid and we plan to do some fishing and such over the next week before flying them back from Ketchikan. After that, maybe some Prince of Wales exploring before we leave Alaska.