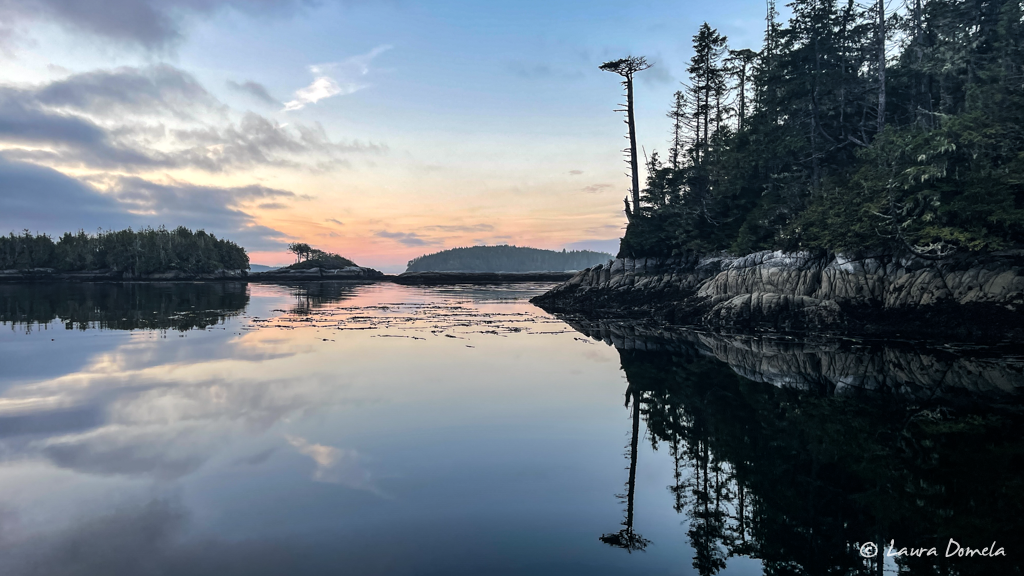 We left Shearwater late morning with perfectly clear skies and calm waters. Today we planned to stop just this side of Cape Caution and then go around in the morning to Skull Cove.

Our destination today was originally Big Fry Pan Bay (since the BC Parks’ website says Fury Cove is still closed for anchoring due to Covid, which seems weird, but okay). However, after looking at chart a little more, we thought we’d try a spot just south of Fury Cove, marked “Secure Anchorage” on the chart, which, as it turns out, is accurate. It was beautiful, and a little less tucked back in than Big Fry Pan Bay, which meant a quicker exit in the morning. We dropped the dinghy and went exploring around many of the little islands dotting the shoreline. It’s gorgeous in here, and the weather could not have been better. 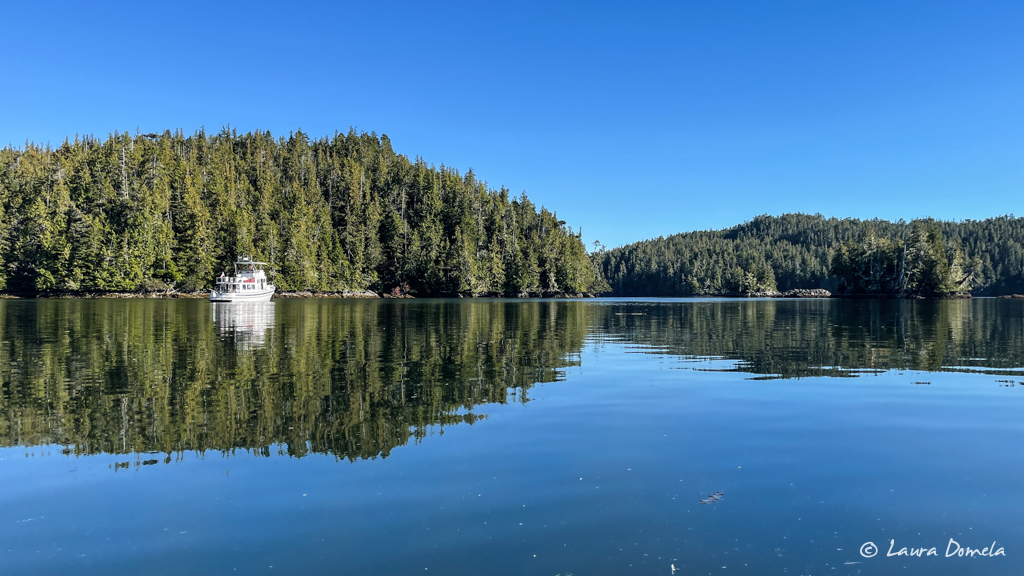 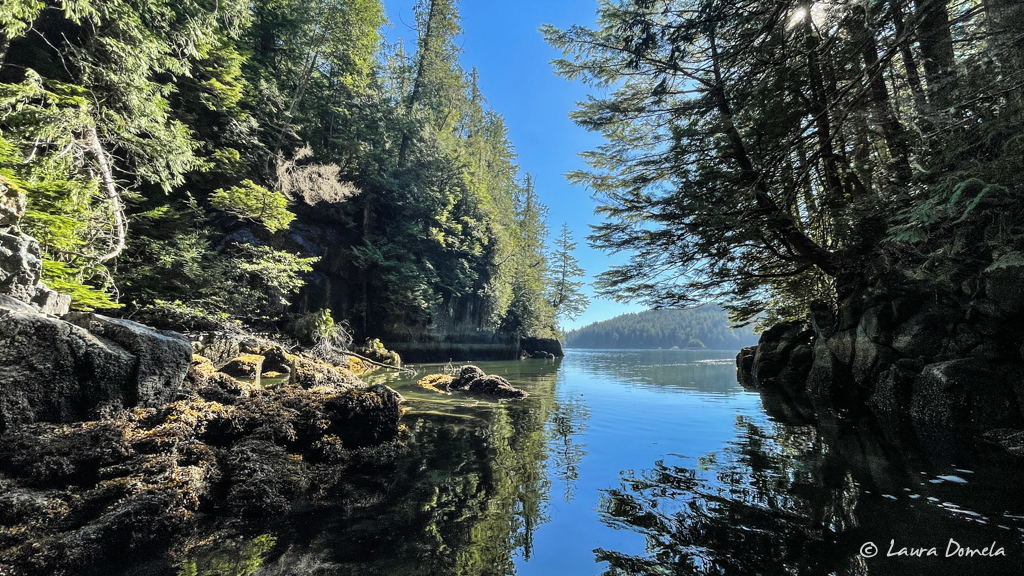 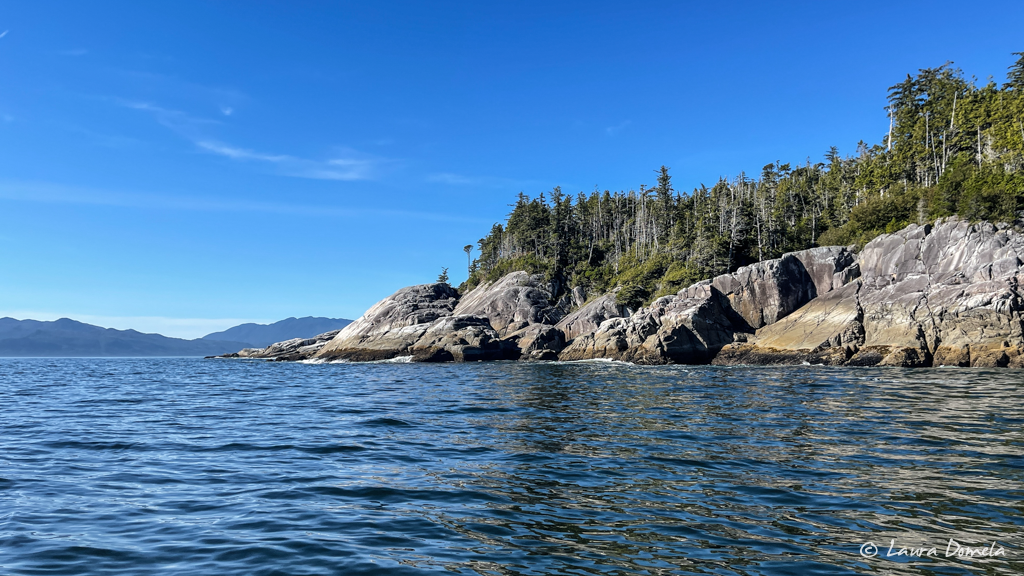 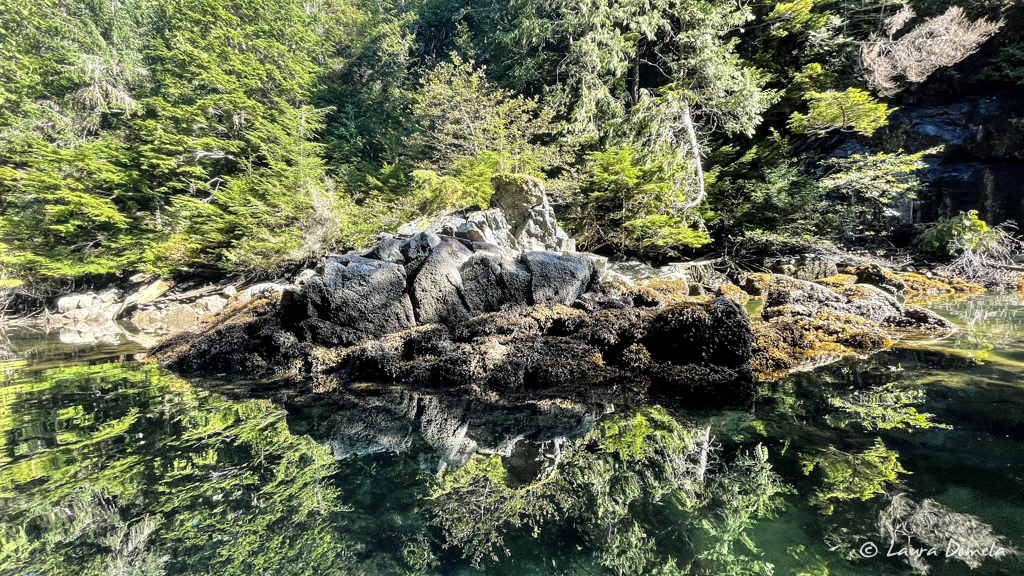 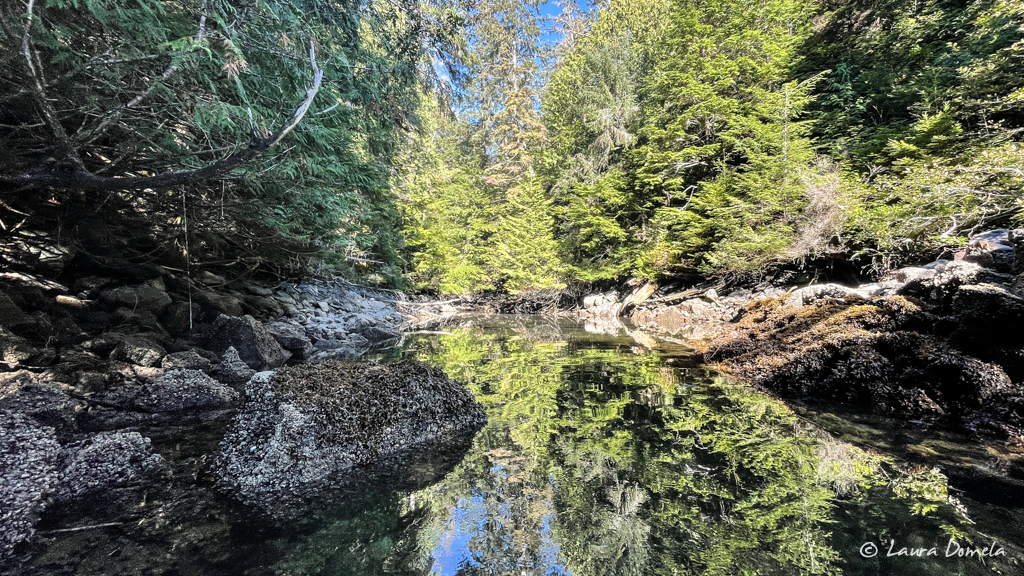 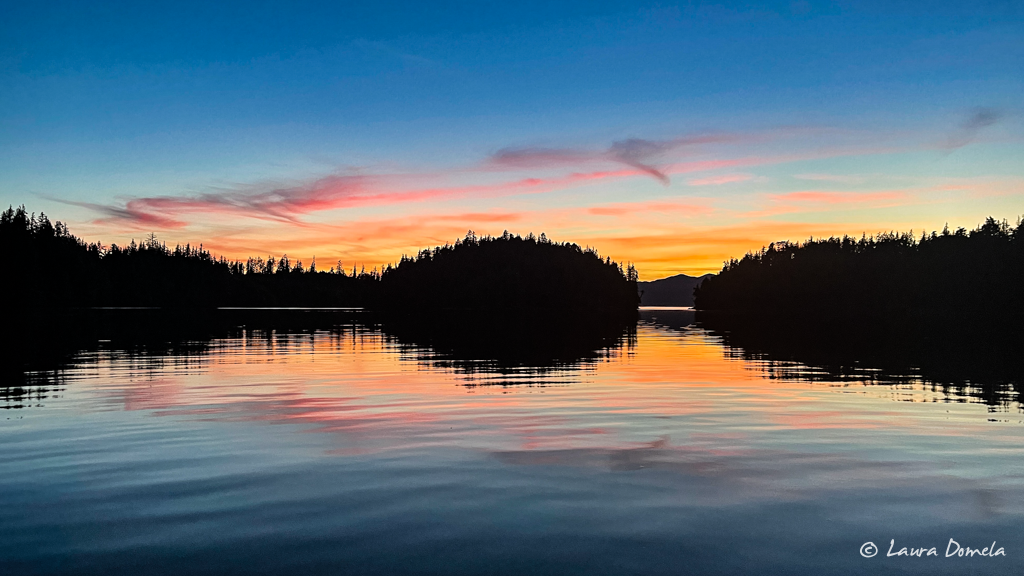 Another sunny morning as we head for Cape Caution! 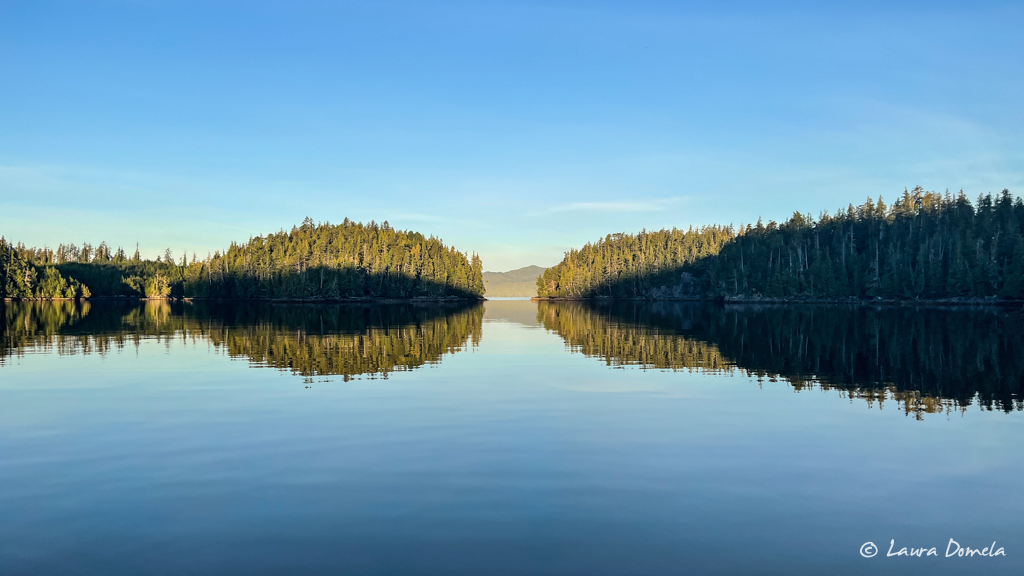 We only had 30-something miles to go to Skull Cove, so no need to leave at the crack of dawn (which, admittedly, is not super early these late summer days). Conditions were wonderful, and we anchored in Skull Cove and enjoyed the afternoon. 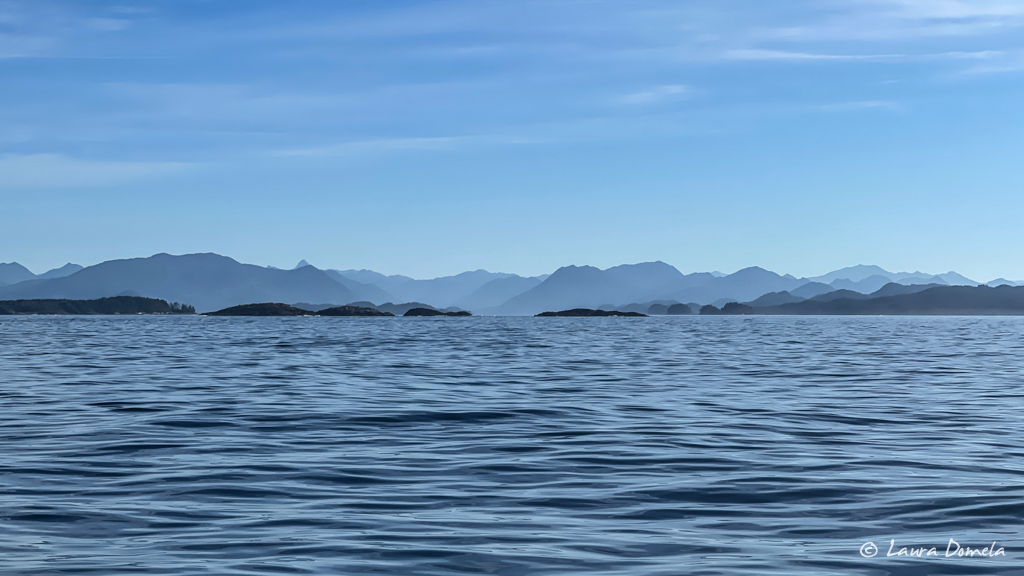 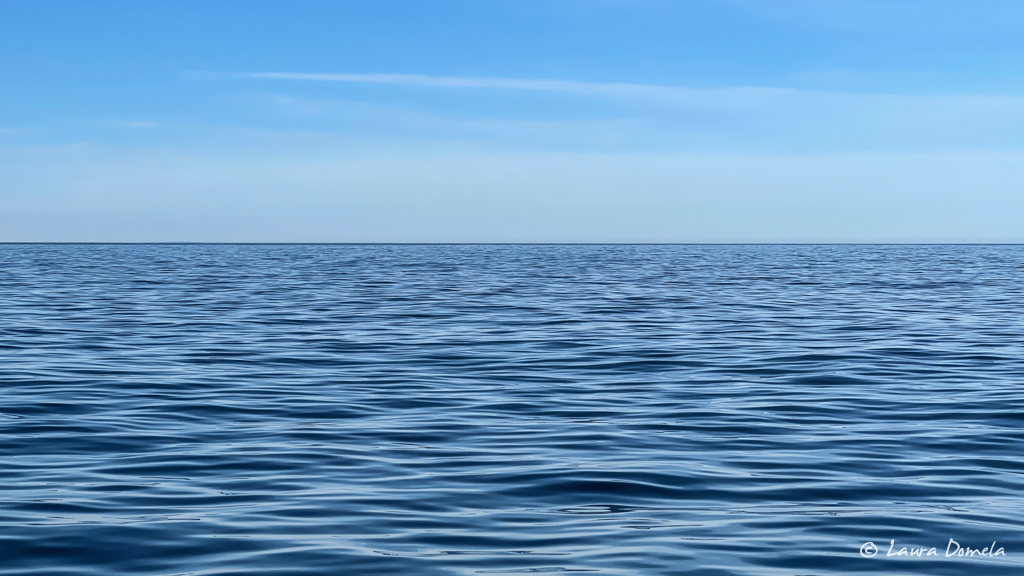 The view from our anchorage in Skull Cove: 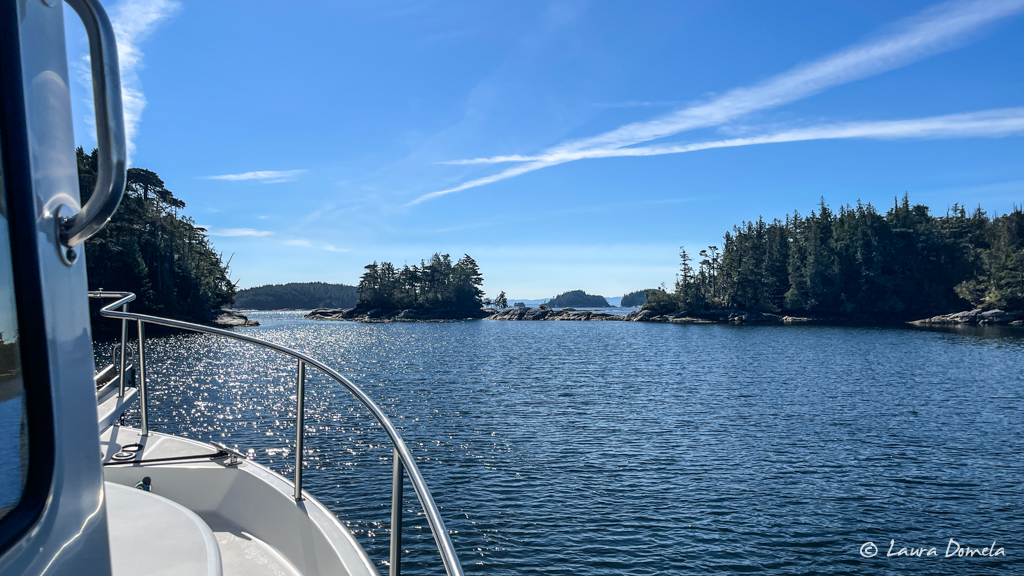 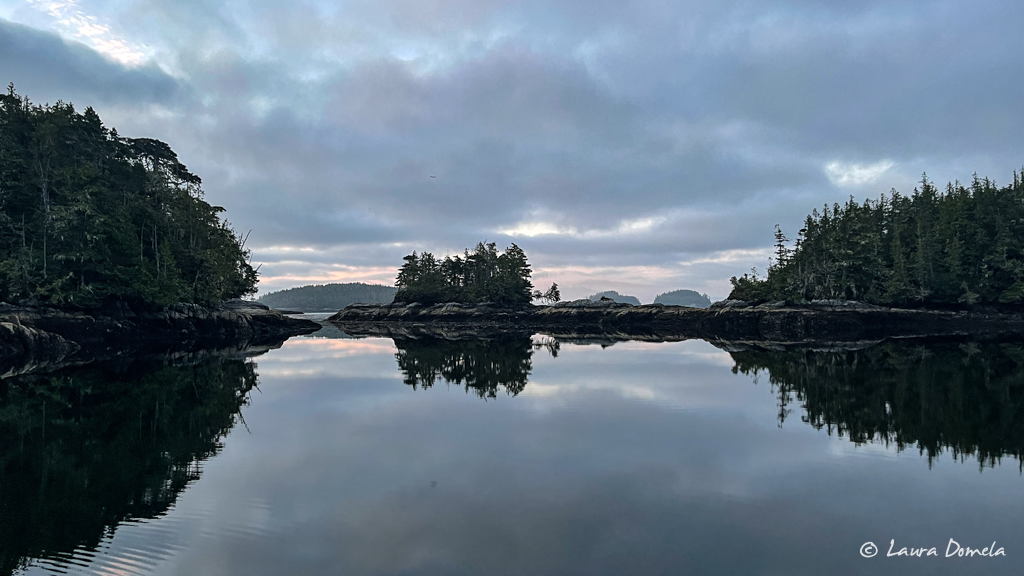 Early the next morning we left Skull Cove and headed out into Queen Charlotte Strait, which was calm as could be.

We’re in the “making miles” section of our trip at this point, obviously. We stopped at Port McNeill for one night for provisions and some internet. Kevin had a Zoom meeting in the morning, and we left around 10am, cruising from Port McNeill to Port Neville, where we dropped anchor not too far past the public dock (in 1.8kts of current!) The sound of the chain sliding around over the rocky bottom every six or so hours as it changed from ebb to flood was a bit noisy with this much current.

Later, after we got in bed, I was hearing an unfamiliar squeaking sound that I couldn’t place. Maybe something changed in the motor of the dehumidifier. Nope. Louder as I got out into the salon. Couldn’t figure out any direction though. I opened the back door and it was louder outside. The flag on the pole? Nope, no wind. The squeaking was rhythmic, mostly, and a little electronic-sounding, which was odd. Could it be something about this strong current going past a thru-hull? I opened the hatch to the lazarette and it seemed to be coming from there. By that time Kevin had gotten up as well to see if he could help me diagnose. Maybe the hydronic heater? Maybe the wash down pump? Fresh water pump? Something got some air in it? We turned off the breakers to those things one by one and nothing made a difference. We checked the hydronic heater fluid (full) and then turned it on (no change). I climbed down into the laz and moved my head around trying to pinpoint the direction the sound was coming from…it’s funny how difficult this is sometimes with certain sounds!! It seemed like it could be coming from under the water tank. The bilge pump under there? Up to the pilothouse to try that switch…no change. Well now it seems a little bit central, so I went back into the salon, opened the engine room hatch, and there it was. The drive shaft was going around and around and the little grounding wand that touches it was squeaking as the shaft turned. The current outside the boat was making our propeller spin, and there was the cause of the squeak. Fun with boats!!

The next day was Port Neville to Kanish Bay. Kanish Bay is about an hour from Seymour Narrows (which is running 10+ knots at max right now!!) so we’ll hang here until it’s time to go and time that transit for close to slack tomorrow (just before noon).

As we were maneuvering to drop the anchor, movement in the distance caught my eye…this seal was muscling his round little body up and down on this rock (looked like a chubby boomerang flipping up and down). It was hard to even tell what it was in the distance, but easy with my long lens. He’s gonna get all he can out of that rock until the very last minute when the tide takes it back for a bit. So funny. 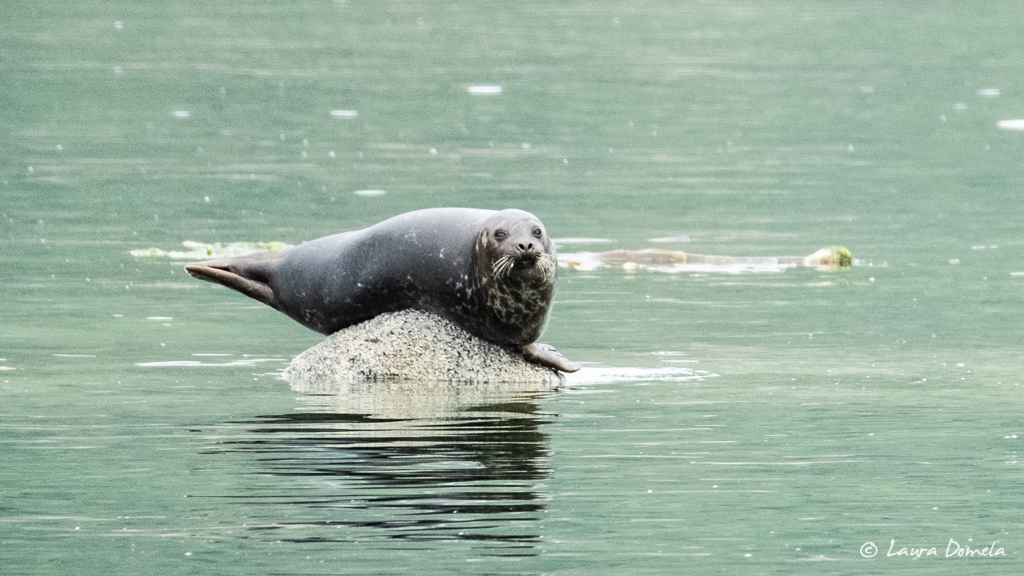 Also, we had strong cell connection until the second we entered the bay. Then, nothing. We motored around a little to see if there was any spot in there where we got service, but nope. Oh well.

I seared some Alaskan sea scallops, and served them with a lemon caper browned butter pan sauce over sautéed spinach and herbed risotto. Yum! 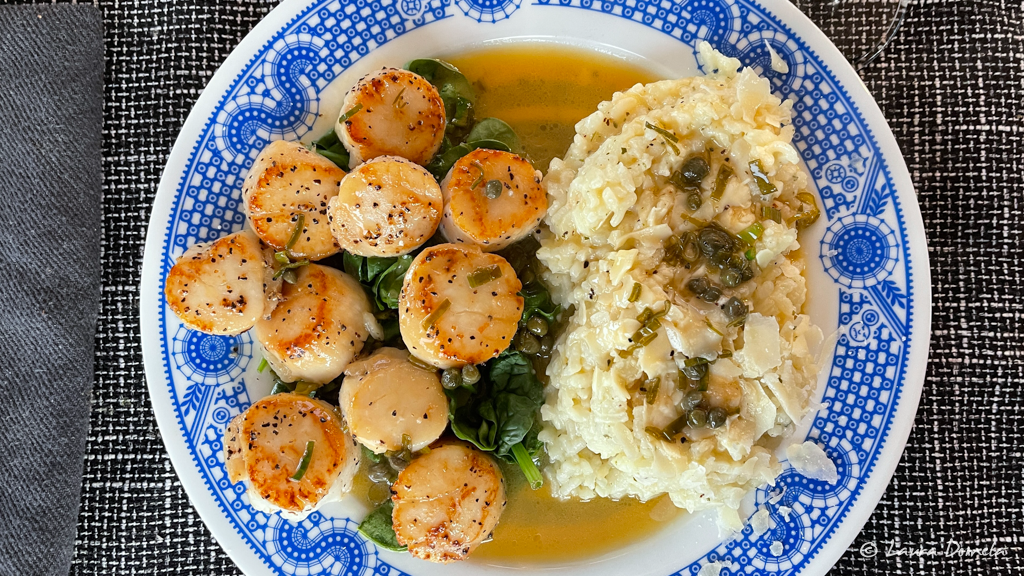 Kanish Bay is beautiful. We anchored just behind the Chain Islands.

In the morning it was super foggy, but the fog slowly lifted by the time we wanted to pull anchor and head for Seymour Narrows (just before 11am).

We were a little late for the narrows which meant that the current had already turned and we whizzed through at about 9.5kts. Wheee! We’re now in Campbell River. We walked up to the (enormous!!!) Real Canadian Superstore and got a few things after we docked and paid up. The place is shockingly large, with many many kinds to choose from of whatever it is that you need. 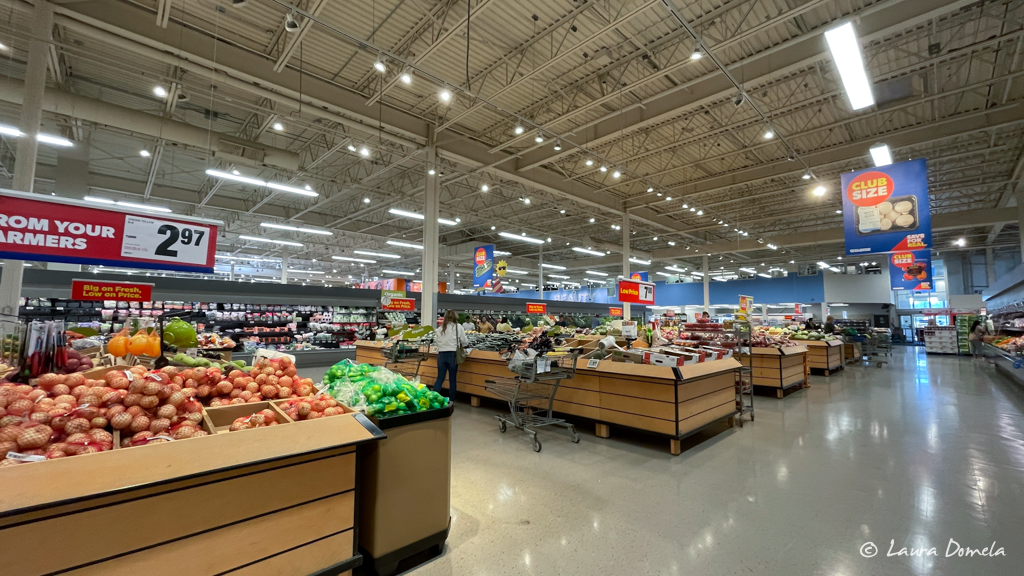 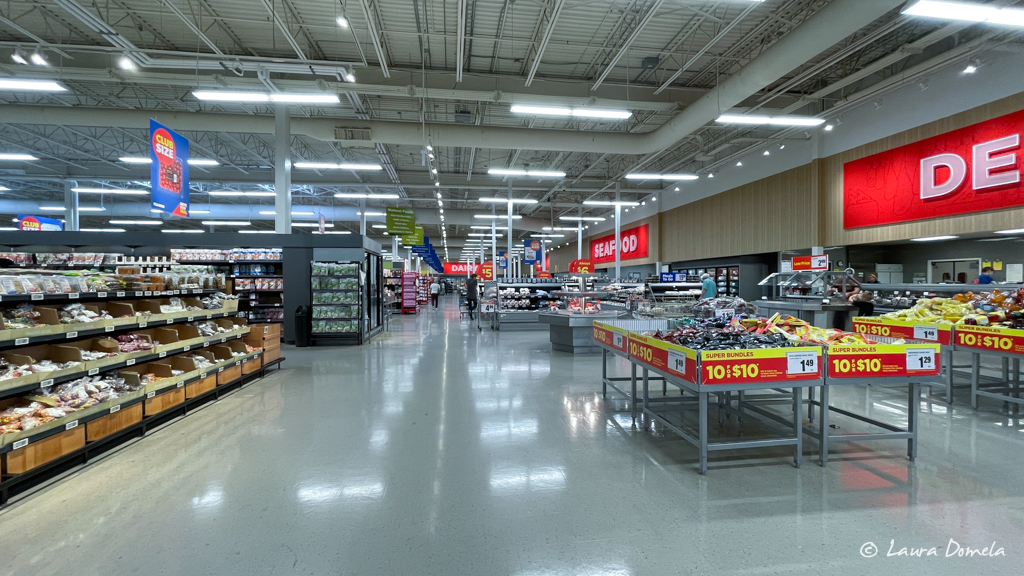 Tomorrow we’ll head south toward Comox (probably stop at one of the marine parks just past) and then on to Nanaimo area (maybe Newcastle Island) and then on down into the Gulf Islands for a couple days, and then back to LaConner.