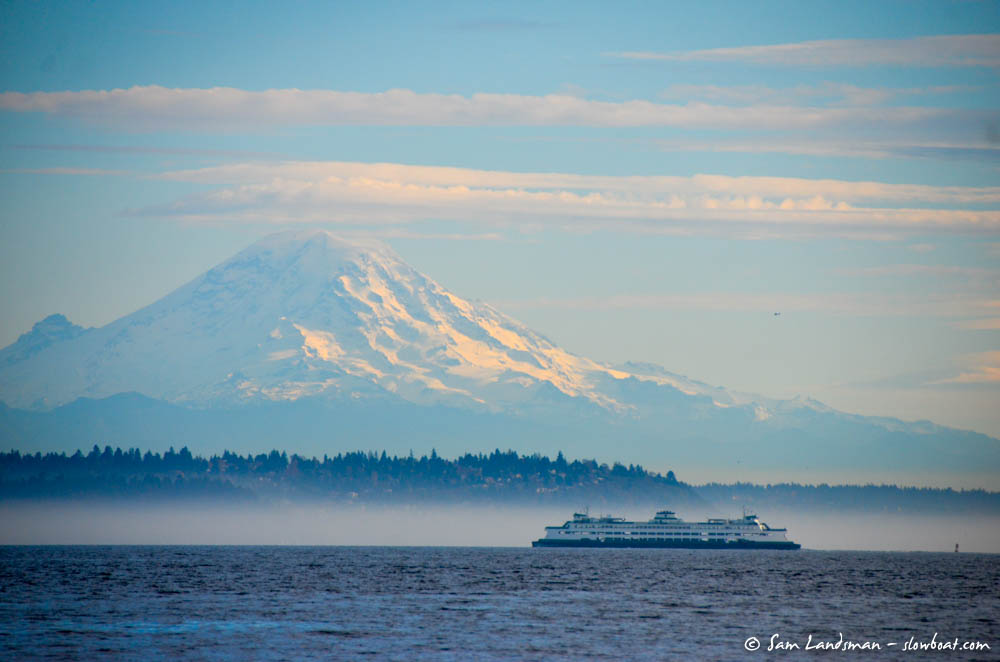 For the last several winters I’ve kept the boat in Anacortes, just an hour from the San Juan Islands. The winter boating was superb, with a dozen or more State Parks within a few hours cruise. More often than not, I was the only visitor. This winter, I’m based at Elliott Bay Marina in Seattle. And while it’s not close to deserted islands, I’m thoroughly enjoying winter cruising on Puget Sound. The most recent destinations? Eagle Harbor (Bainbridge Island), Gig Harbor, and Tacoma.

One of the challenges of winter boating is darkness. Sunset is around 4:30, and if it’s cloudy, the light doesn’t linger long. And so, when I pulled out of the marina at 4:15 p.m. on Wednesday, darkness was rapidly closing in. Low clouds glowed dramatically over Seattle, reflecting the city lights. I dimmed the pilothouse navigation displays, switched on the running lights, and made an uneventful trip across Puget Sound to Eagle Harbor on Bainbridge Island. Seattle Yacht Club maintains an outstation at Winslow Wharf Marina, and unsurprisingly there was plenty of space when I arrived.

The City of Bainbridge Island (formerly Winslow) lies on the shore of Eagle Harbor. It’s a charming, upscale small town. Restaurants, bakeries, and small shops line main street. The Town and Country supermarket, just a few blocks up from the waterfront, is excellent: like Whole Foods, but local, less pretentious, and they carry all the usual brands. Most importantly, Washington State Ferries regularly run between downtown Seattle and Bainbridge, so Anna could easily join me on Friday afternoon.

Surprisingly, grocery stores can be hard to find when cruising in Puget Sound. Neither Gig Harbor nor Tacoma has a grocery store within walking distance of the waterfront. So once Anna arrived, we set off for the Town and Country to pick up a few items. We barely made it out of the marina before we ran into Krishna, a solo-sailor I first met in 2012. After a few minutes of chatting, we delayed our grocery shopping and headed to the local Vietnamese restaurant for dinner.

I first met Krishna and his German Shepherd in Petersburg in 2012. I was in the C-Dory, he was in a 25 foot Bayliner Buccaneer sailboat, and we were moored next to each other. He’d been living in Haines but was relocating to Seattle. He’d purchased the Bayliner for $500, complete with two unreliable outboards and no navigation electronics, and was heading south. He had some paper charts and an iPhone.

I didn’t see Krishna again for a month or two. I wondered if he’d given up, abandoned the boat, and hopped on the ferry. Then he appeared, this time in Shearwater. We hung out at the bar, compared notes (he was down to just a few paper charts; the iPhone had failed), and drank too much. The next day, I departed. Eventually, I forgot about Krishna.

Fast-forward to Shearwater, summer 2016, and Krishna reappears. He’s on a new-to-him 27-foot sailboat. No outboard, just sails and a homemade electric propulsion system, and he’s heading back to Alaska. We chatted on the dock. A few nights later we crossed paths again, this time in Rescue Bay, and we both had dinner on Event Horizon. Then our paths diverged, until we were walking to the grocery store on Bainbridge Island.

Now he lives aboard at Winslow Wharf, while he works in Seattle and builds a new wooden sailboat in Silverdale. After dinner, we had drinks on Safe Harbour and continued catching up.

Krishna’s story is important for a couple of reasons. First, it’s not about the boat. If Krishna—a novice sailor—can successfully cruise the Inside Passage on a $500 boat with only paper charts…well, most boats are up to the task. More importantly, cruising is about the people, the spontaneous experiences, the impromptu gatherings. I’d never meet Krishna in my normal life, but on the water, chance encounters are the norm.

We never made it to the grocery store Friday night, so we went Saturday morning, then headed off to Gig Harbor. NOAA called for 15-25 knot southerlies, which would have resulted in a bumpy ride with seas right on the bow, but they didn’t materialize. Instead, we motored 20 miles south in calm conditions, arriving at the SYC Gig Harbor outstation mid-afternoon. Only one other boat was at the dock.

Anna had homework to do, so I took the dinghy across to town and wandered around for an hour. Gig Harbor is a sleepy small town, easily walkable, with history rooted in fishing and boatbuilding. A maritime museum, brewery, and several restaurants looked appealing, but increasingly heavy rain drove me back to the boat. 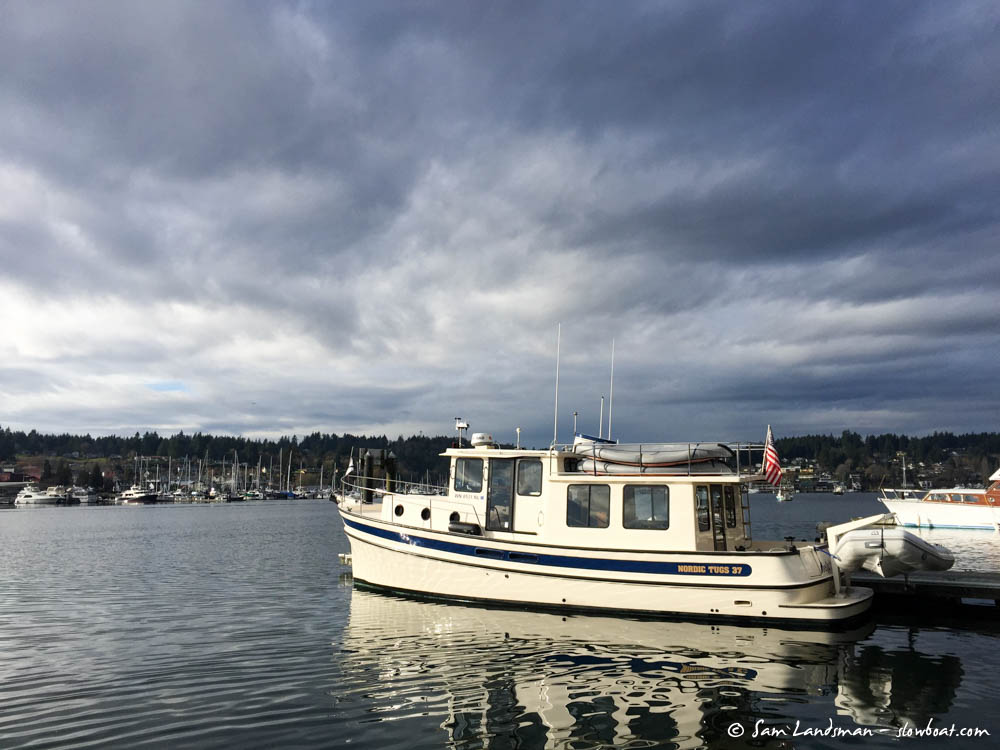 Sunday morning we headed for Dock Street Marina, at the head of the Thea Foss Waterway in Tacoma. It’s a modern, clean, well-managed facility. When you check in, they give you a goodie bag with maps of the area and brochures and coupons for local attractions.

Growing up in Seattle, I tended to turn up my nose at our neighbor to the south. Slogans like “The Tacoma Aroma” come to mind. But Tacoma has changed, particularly along the Thea Foss Waterway. Most of the derelict buildings are gone. Industry is still active, but it’s not overpowering. There’s no foul smell. Several museums, including LeMay-America’s Car Museum, the Washington State History Museum, and Foss Waterway Seaport, are within easy walking distance of Dock Street. The Museum of Glass is just steps away, and it was our first destination. Though small, we enjoyed the museum. Watching artists work in the hot shop was the highlight.

After the museum we walked around Tacoma until the rain picked up. University of Washington operates a satellite campus just up the hill from Dock Street, and the concentration of students has attracted a variety of casual coffee shops, restaurants, and bars. The area was empty on a rainy Sunday afternoon, but I imagine it’s livelier the rest of the week.

Monday dawned clear, a welcome change from the dreary weather the last several days, but it wasn’t quite clear enough to see Mount Rainier. A bummer, since from Tacoma, the mountain appears reach-out-and-touch-it close. After breakfast we headed back to Eagle Harbor, 25 nautical miles to the north.

And then, all too soon, we were back to Seattle on Tuesday morning. I dove right into boat maintenance—replacing the raw water pump impeller, draining the coolant, replacing the coolant circulation pump, replacing the thermostat, and pulling the heat exchanger for cleaning. No boating for a week or so, but there’s lots of winter cruising to come. The San Juans, Gulf Islands, and Princess Louisa Inlet are on the agenda…