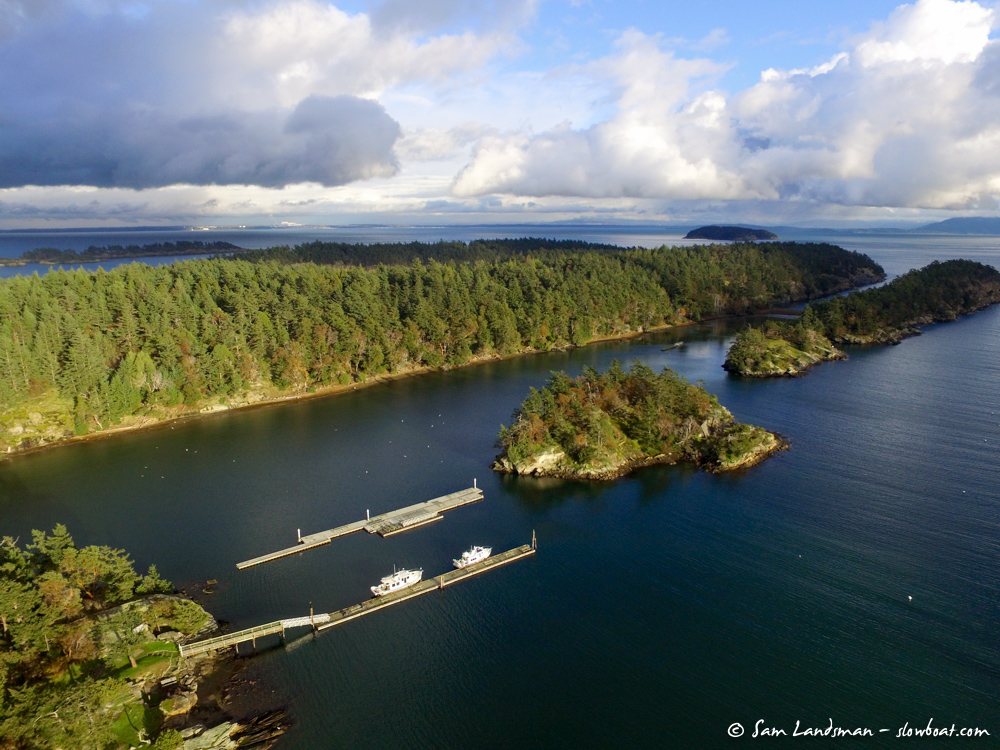 Half a mile outside of Elliott Bay Marina, I peeked into the engine room and saw hot, strawberry-red coolant spraying out of a now-disconnected hose. Twenty knots of southerly breeze was pushing me towards Magnolia Bluff. Instinctively I dropped the anchor and shut down the engine.

This was a maintenance-induced failure. I’d just had the whole cooling system apart to clean or replace several components. Although I’d test run the engine in the slip (no leaks!), I was hyper-aware of the possibility of leaks, and was checking the engine room frequently.

Repositioning the hose and tightening the hose clamp (now an AWAB clamp…these are so much better than the Ideal brand clamps installed by Cummins) took just a few minutes. Excitement over, I pulled the anchor and headed north.

I made it to Hope Island just as darkness was falling (only 4:30 p.m.!) and tied up to one of the mooring buoys. Aside from gusty winds—41 knots at one point—and the coolant hose problem, day one of my winter cruise was uneventful.

I’m planning on spending about a month out on the boat. Hopefully I’ll get to Princess Louisa Inlet sometime around New Years. I’ve always wanted to visit in the winter, and now seems like as good a time as any. For the next couple weeks, I’m wandering around the San Juans.

My first stop was Sylvan Cove, which indents the northwest corner of Decatur Island. Although the land ashore is private, the cove is picturesque. My family has a cabin on the island, so I took advantage of a break in the rain to walk to the top of the island. The view is among the best in the islands.

The next day was social day in Roche Harbor. Laura and Kevin arrived, and then a few hours later friends Rico, Wanda, Scott, and Carey showed up. We all had happy hour and then dinner aboard Rico and Wanda’s Tollycraft…thank you!

During summer Roche Harbor is a madhouse, literally chock full of boats, boats anchored all over the harbor, lines for restaurants and restrooms. This time of year most of the slips sit empty, there wasn’t a boat anchored anywhere, and we seemed to be the only guests.

On Monday morning, Laura and Kevin and I  left Roche Harbor bound for Sucia Island. The forecast called for big north winds (and near freezing temperatures) on Tuesday, so we opted to tie up to the dock in Fossil Bay. A good choice, as it turns out, since all the other coves looked rather bumpy once the wind arrived.

And that’s where we are now…tied to the dock in Fossil Bay, furiously recording new segments for our “Mastering the Inside Passage” webinar series, and fitting in a hike here and there…