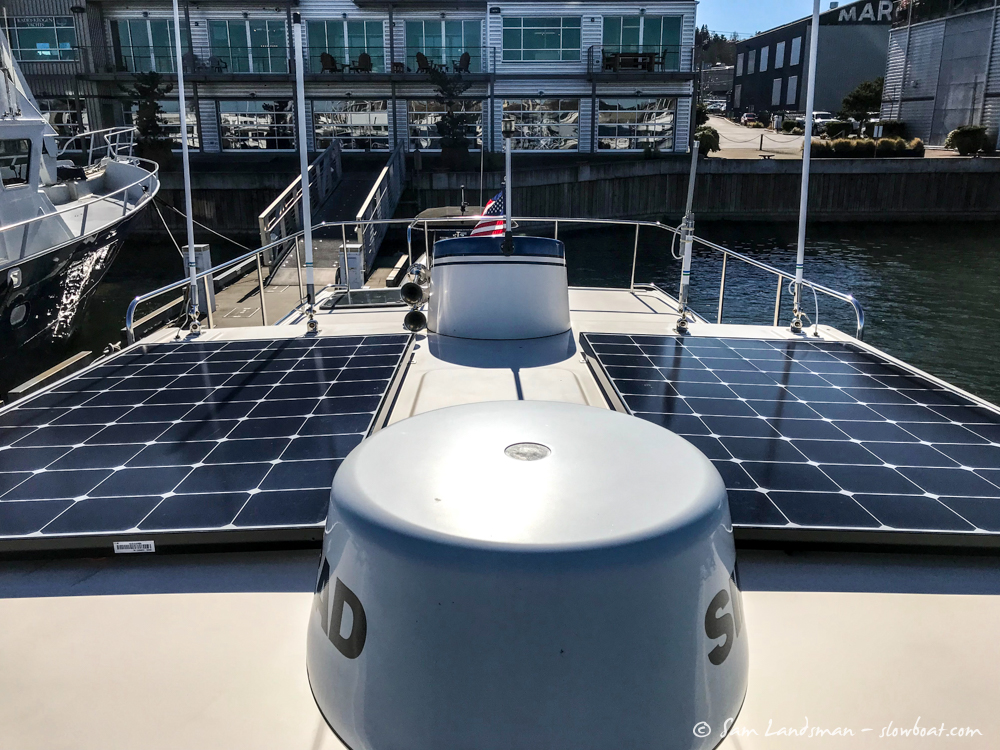 For the last several years, Kevin and Laura have had solar panels installed on Airship. As we cruised together, we compared notes about electrical systems. Despite their enthusiasm for solar, I remained a solar skeptic (maybe even a solar curmudgeon!). I figured I already had a fancy alternator and reasonably sized battery bank. I only used the generator occasionally, typically when I needed hot water and hadn’t run the engine that day. What problem would solar be solving?

Let’s back up a moment, and look at why I didn’t think solar made sense…

First, I’m not a power conserver. My inverter runs 24/7. I routinely burn through 300+ amp hours (at 12V) a day. Cruising, to me, is not about seeing what I can do without. It’s not camping. I’m not interested in sponge baths, doing dishes in cold saltwater, being uncomfortable, or worrying about turning the microwave on to reheat something for lunch.

I’m also underway a lot during typical summer cruising­–at least four hours a day, and I tend to move every day. When I’m alone on the boat, four hours underway is all I need to charge the batteries to near 100%, fill the water tank from the 12V watermaker, and have enough hot water stored in the water heater for a shower on arrival and dishes in the evening.

If other people are on the boat with me, the situation changes a bit. I’ll often run the generator in the morning for an hour or so, so we have hot water to shower and clean up after breakfast. If I don’t go anywhere for a day, I’ll run the generator to charge the batteries and make hot water.

Some people hate generators. I don’t. Mine just isn’t that annoying: it’s audible, sure, but not objectionable. Outside the boat, it’s whisper quiet—way quieter than a lot of furnaces. When rafted to other boats, I’ve occasionally apologized for starting the generator, only to hear from the rafted boat that they didn’t even notice.

My principal objections to solar were thus twofold. First, I didn’t think solar would make enough power to have a meaningful impact on generator use. And second, I didn’t see the need, since I already had as much power as I wanted through existing equipment.

Last summer’s trip down the west side of Vancouver Island was different. Because the distances were often short—sometimes less than an hour—the alternator didn’t have time to recharge the batteries. No problem, just run the generator. Until it stops and won’t restart, at which point there are a few options: head to a dock with shore power (often inconvenient or unavailable) or run the main engine and charge the batteries with the alternator (not good to run the main with such a light load). So I started thinking about alternatives.

Solar seemed like an interesting possibility. It wouldn’t totally solve the redundancy problem, since it’s not exactly power-on-demand, but there were lots of benefits. It would just work, no maintenance required. It would be good for the batteries, keeping them more fully charged and providing a nice “float” charge that can’t be efficiently applied by a generator and battery charger. Most importantly, it would be useful even when the generator was operating normally, by providing some extra power whenever there’s daylight.

I quickly realized that when I ran the generator most—like when cruising short distances last summer on the west side of Vancouver Island—the solar would be most valuable, since I needed the power AND the days were long and sunny.

I started to measure and do math. The pilothouse roof was basically wasted space, so I wasn’t giving anything up by putting panels up there. I discovered two 365 watt panels would fit easily. Research suggested this should be good for about 200 amp hours during a typical summer day in the Pacific Northwest. Enough to make a difference, to keep the batteries nearly charged. Instead of running the generator for three hours a day to charge batteries, I could run the generator for 30 minutes—enough to heat water and provide a little charging—then the solar would do the rest.

So I bit the bullet, ordered the panels and controller, and arranged to have them installed.

They’ve been installed for a month now and they’re exceeding expectations. February in Seattle isn’t exactly prime solar power season, but even on their worst day the panels have made about 30 amp hours—not much, but something. On sunny days, the results are much better. Several times I’ve seen daily outputs in the 140-150 amp hour range, enough to cover the electricity consumed during daylight hours and add a significant amount to the battery bank. During summer, when the days are many hours longer, the results will be even better.

Once solar panels have been bought and installed, there’s nothing to do other than clean them periodically. They harvest previously wasted energy silently, passively, and for free. So now, when I’m sitting at anchor with the music on and computers humming and refrigerator keeping the beer cold, I look at the ammeter and see a +, and I feel like I’m getting something for nothing.