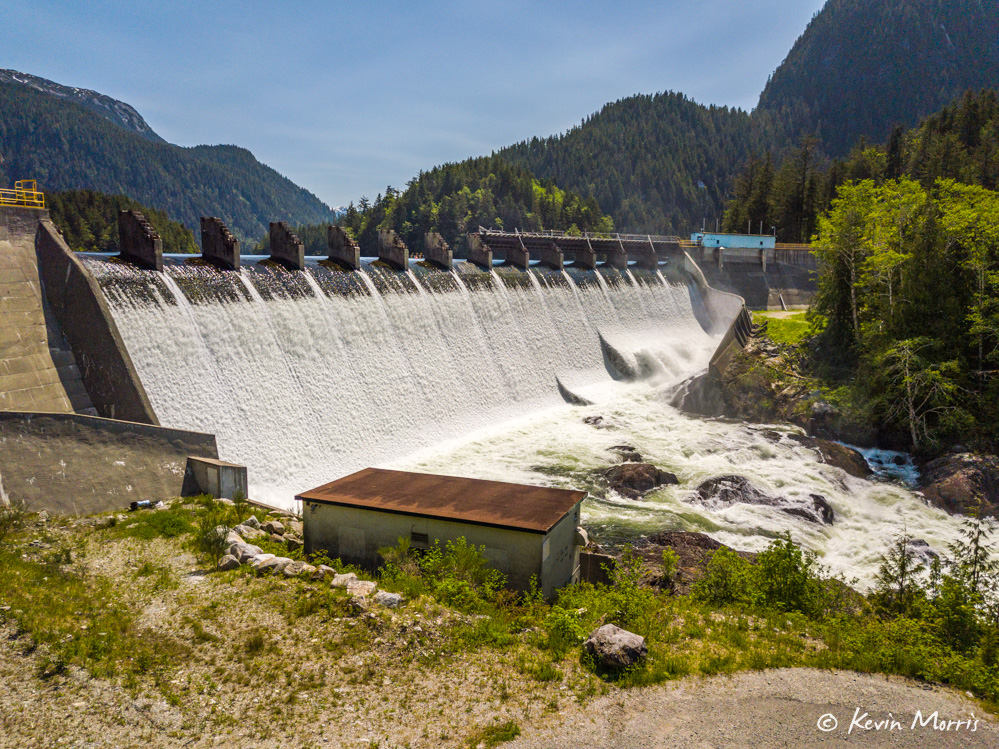 We were on our way to Ocean Falls by 7am this morning. This is an early (and independent!) group.

The wind started to pick up as we approached Cousins Inlet, but the sun was shining and the scenery was beautiful as usual.

We took advantage of the nice weather to hike up to the dam and the lake, then wandered around town in and out of some of the old buildings. It’s interesting as we visit each summer to note the changes from year to year. Mostly, the change is apparent in how much more organic matter has taken over the abandoned man-made structures, but this year there was a bit more of a “buzz” in Ocean Falls than in past years. We saw more people, and more evidence of human activity. 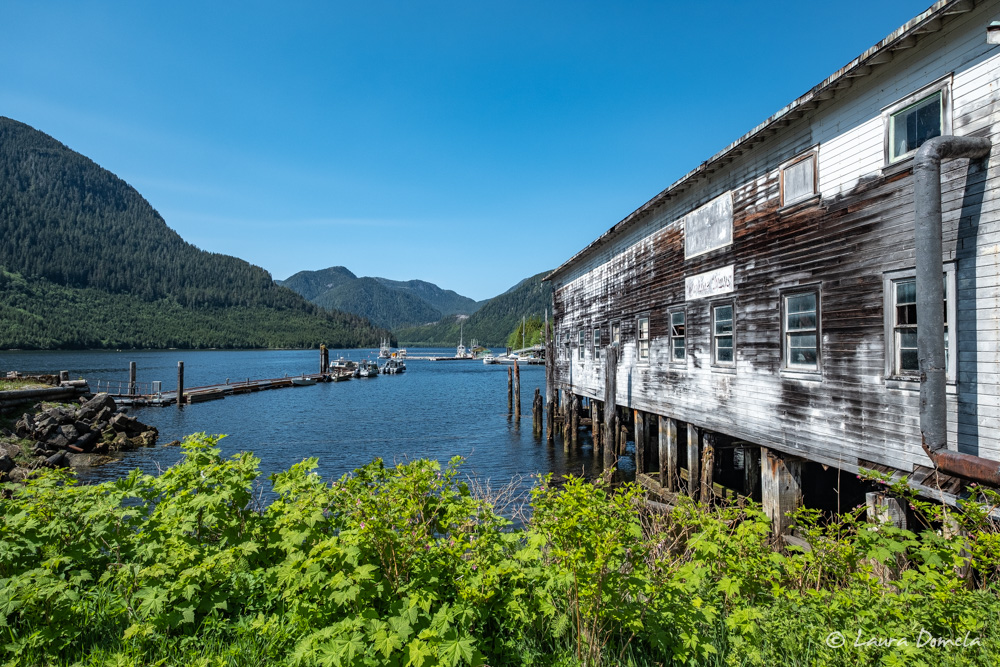 Kevin flew the drone from up near the dam for some overhead shots: 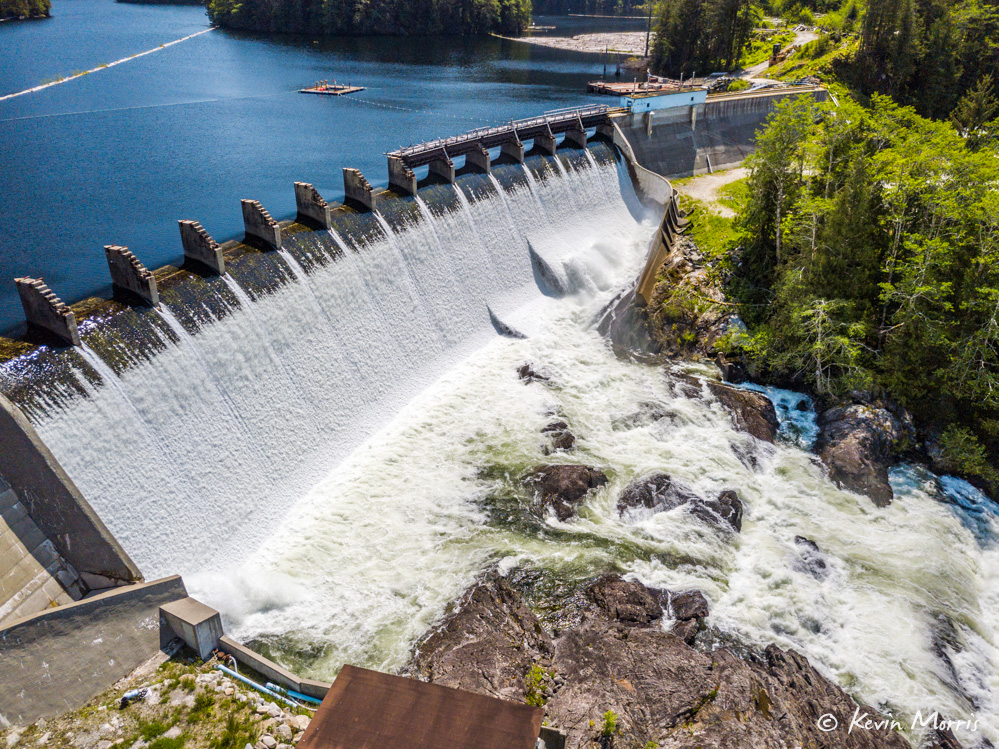 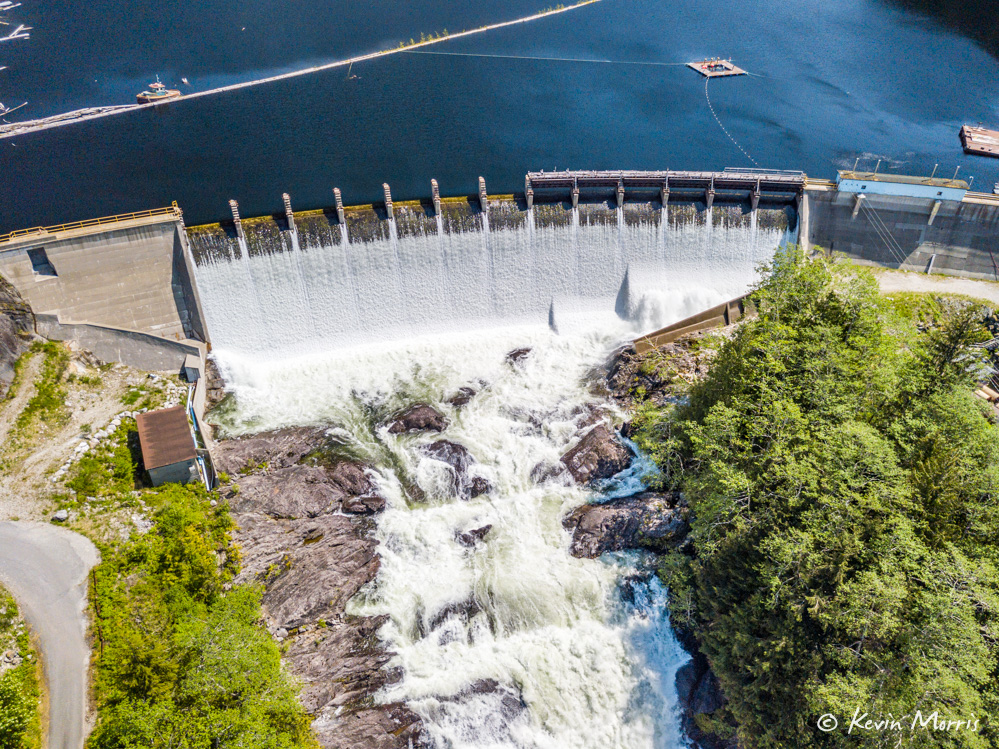 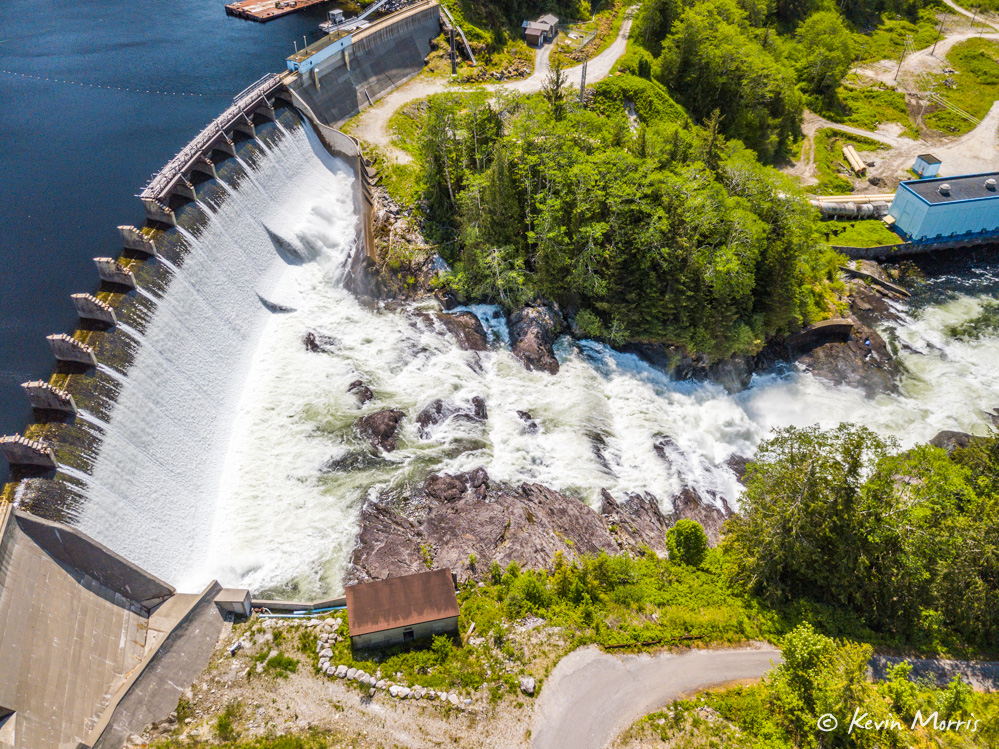 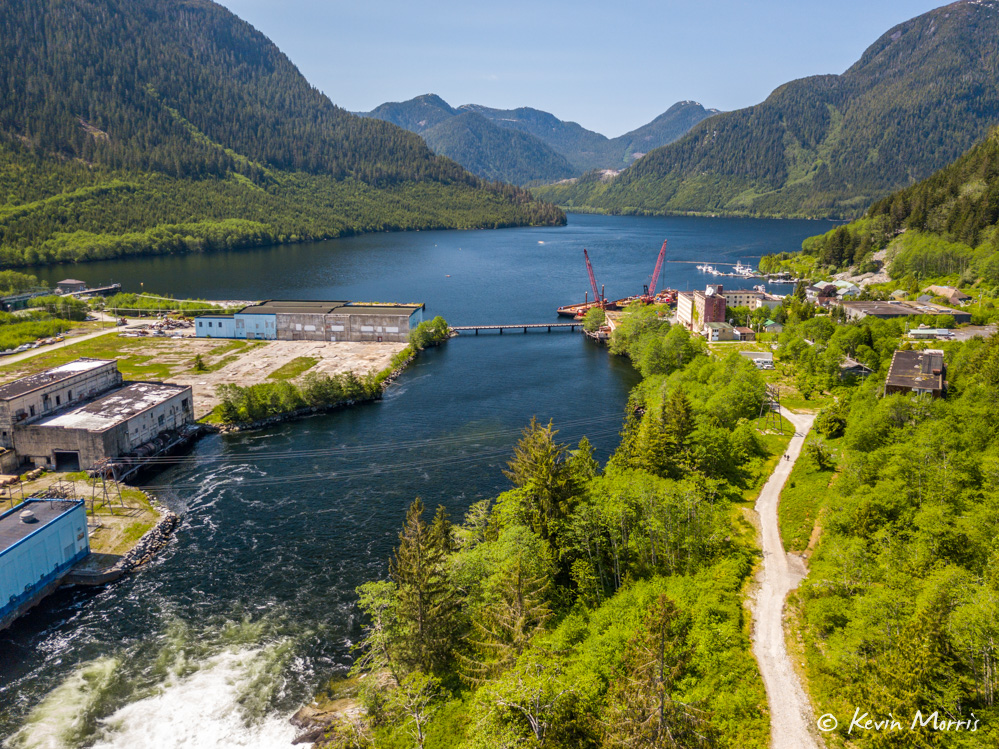 Ocean Falls is experiencing a bit of an economic boom, it seems. After decades of decline (click here for the Wikipedia history), two new industries are emerging: cryptocurrency mining and marijuana cultivation. Both of these industries require lots of electricity, and Ocean Falls has way more power than the current residents can use. Norm said there are three turbines in the dam, and the collective demand from Ocean Falls, Martin Valley, Shearwater, and Bella Bella only uses about half of the output from a single turbine. Mining cryptocurrency profitably depends on huge amounts of cheap electricity, and Ocean Falls Blockchain apparently struck an agreement with the dam operator to use most of the excess capacity. It’ll be interesting to see how this develops!

Other developments include a brand new BC Ferries dock and a new ferry to service Ocean Falls, both still under construction.

Darke Waters, previously the only lodging option in town, was sold to new owners and continues operating. Another hotel, the Old Bank Inn has also opened. Both were full!

Yes, there is much more going on in Ocean Falls this year than in past years, but from the looks of these overgrown streets and structures, you’d never know it.

We took a little detour into the old hotel. Not much has changed since we were here last year.

We set out a couple of crab pots after getting a pro tip from a local that the getting was not as lucrative next to the dam as it had been in past years. We caught 5 big male Dungeness in a couple hours, and we owe that guy a beer!

Later in the afternoon we wandered up to see Norman (aka “nearly normal Norman”). He opened up his “museum” for us and we were able to wander around looking at all the ephemera he’s collected from Ocean Falls during his 30 years here.

The group gathered for dinner in “The Shack” up at the head of the marina. Fresh crab, pierogis, pork tenderloin, broccoli slaw, green beans, spinach, and Pepperidge Farm cookies were on tonight’s menu: 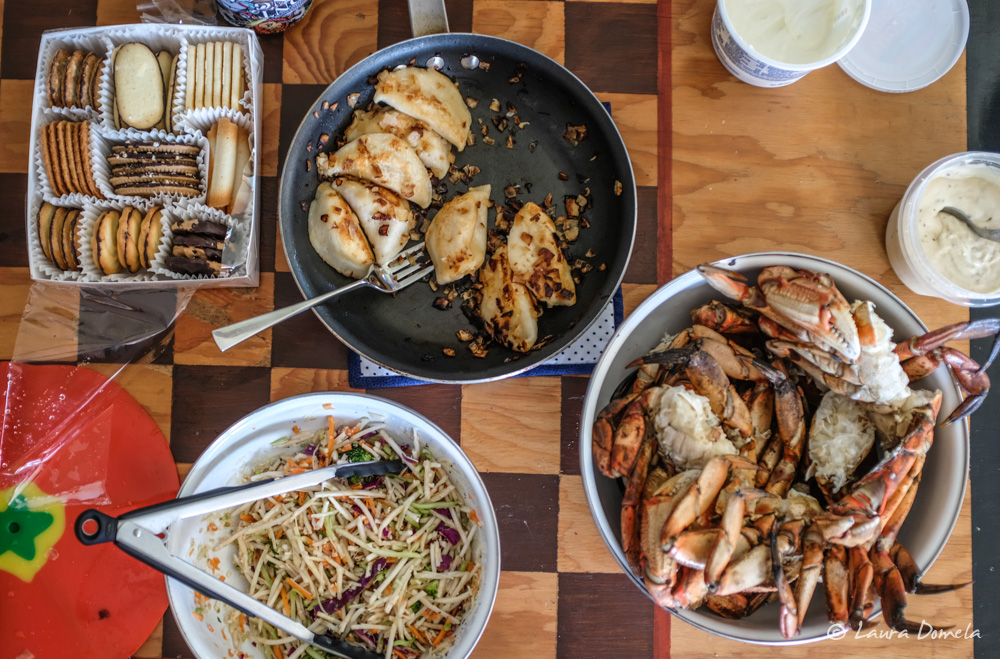 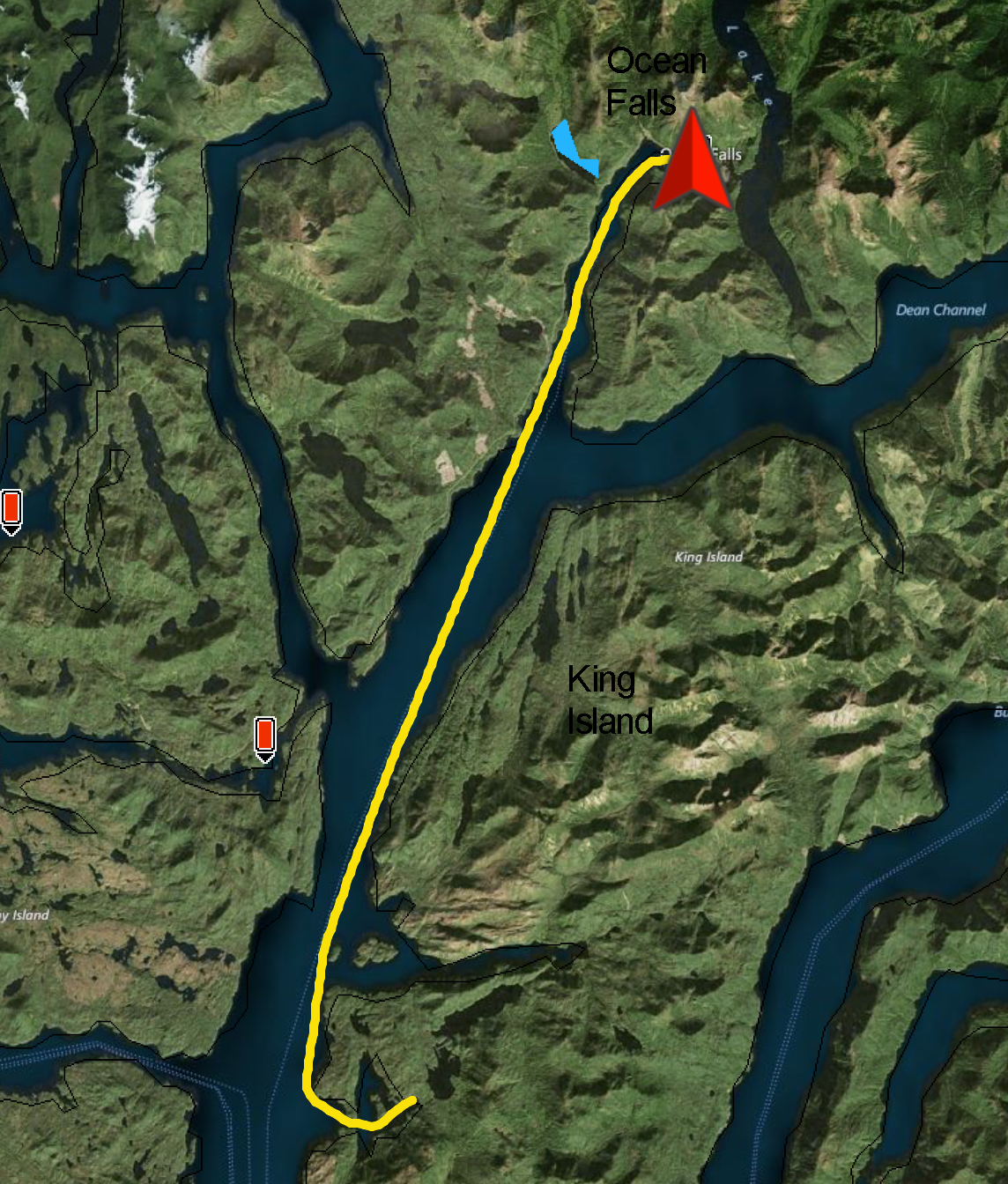