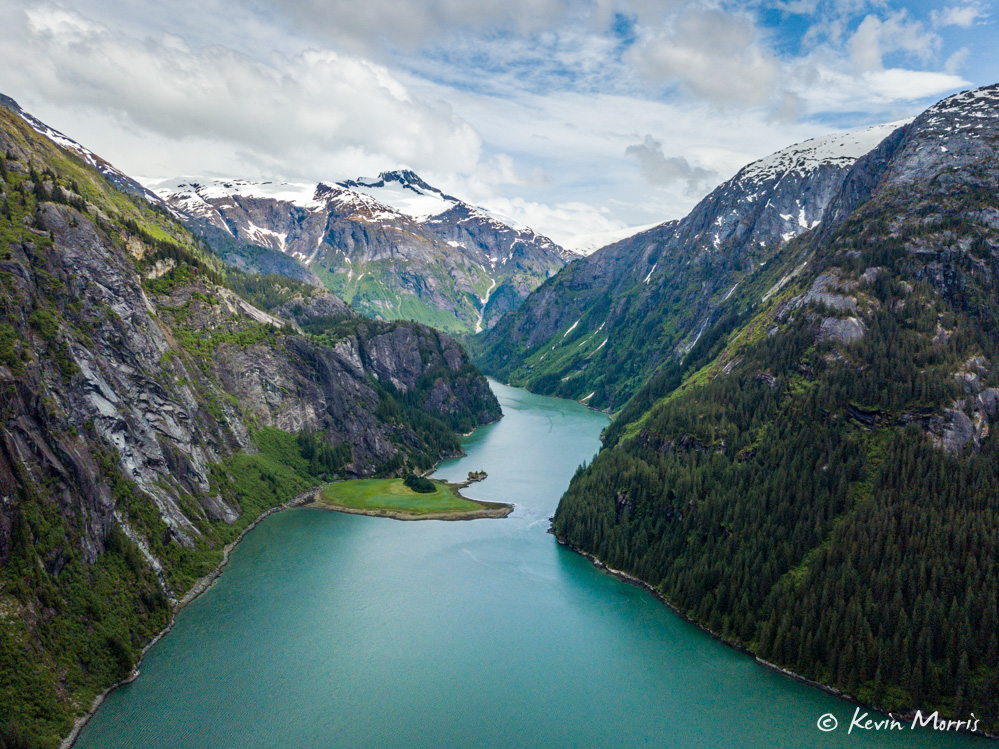 Ford’s Terror is probably our favorite anchorage ever. There’s something about the challenge of getting in, the fact that you can only transit the entrance/exit once every twelve hours (knowing that the current at the entrance can run to 12 knots with large overfalls during non-slack) that makes it an accomplishment. This challenge is rewarded heavily by the enormous unspoiled majestic landscape that surrounds you once inside. Everywhere you look, it’s breathtaking. We are giddy every time we’re here.

Laura was up at 5:00 a.m. this morning because…well, once you get a look at these views it’s hard to sleep through even a minute of it. A while later, Sam baked cinnamon rolls and delivered them to each boat by dinghy. Sustenance for enjoying this scenery!

Kevin took the Mavic up for some aerial shots: 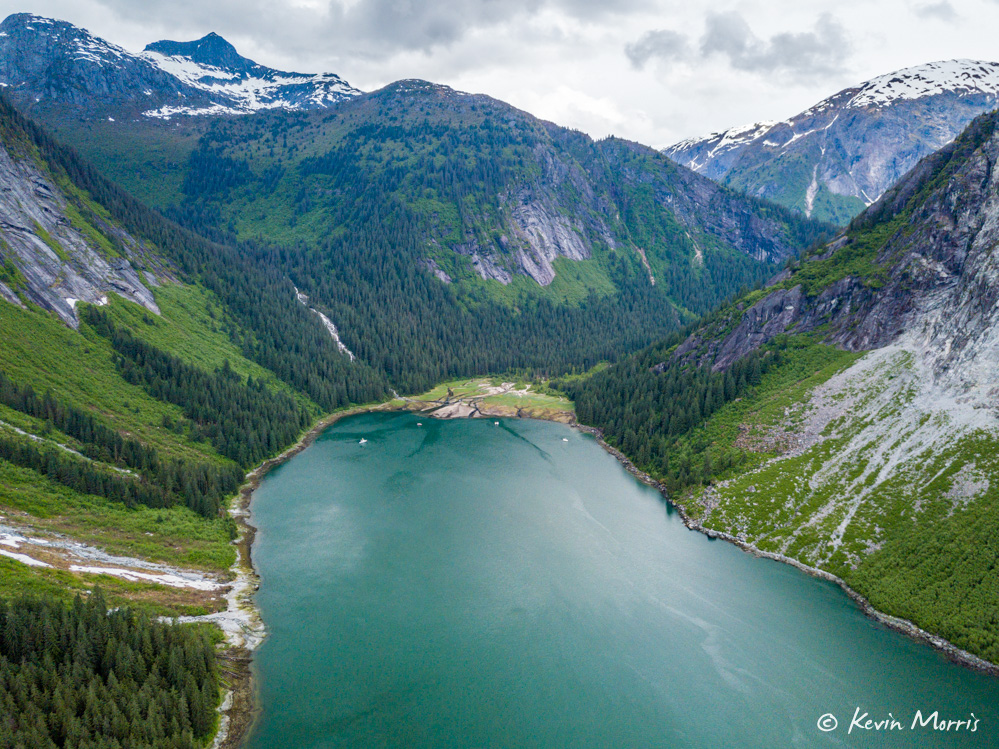 The weather cooperated nicely. Sunbreaks, a few showers, but enough visibility throughout to see the towering peaks all around. And we had this place to ourselves! The morning high slack came and went with no new arrivals.

Dan set his shrimp pots on our way in yesterday evening. When he checked them this morning, this big piece of coral was tangled in the trap: 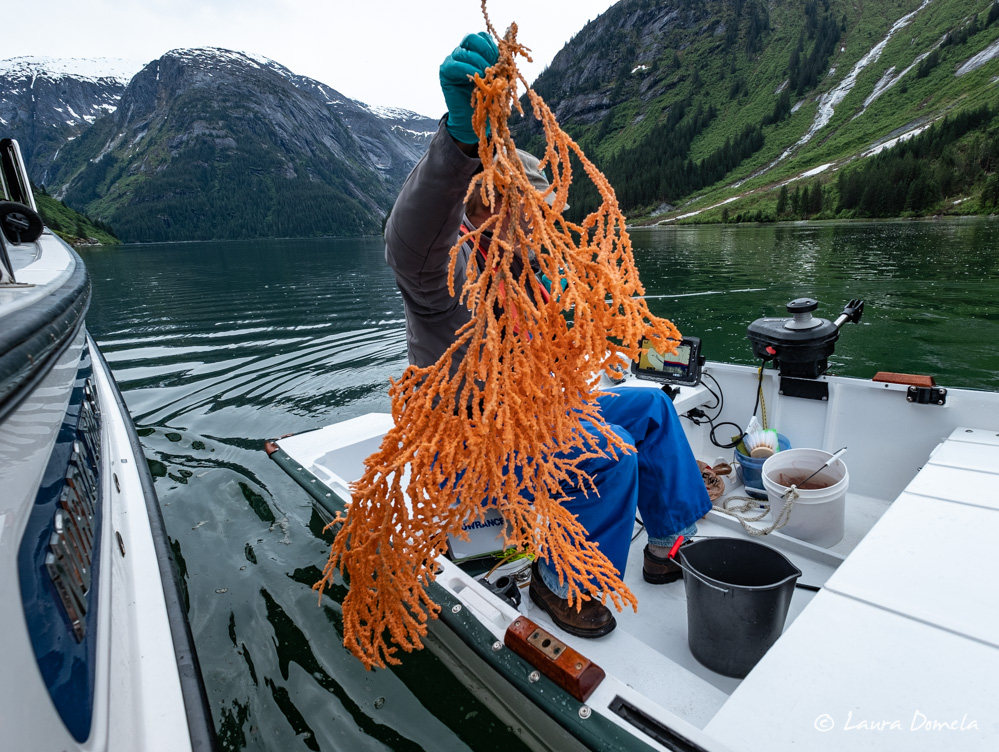 We took another, longer dinghy excursion around Ford’s Terror…in and out of the east arm, out to the entrance, back to the biggest waterfalls…it’s all so beautiful! 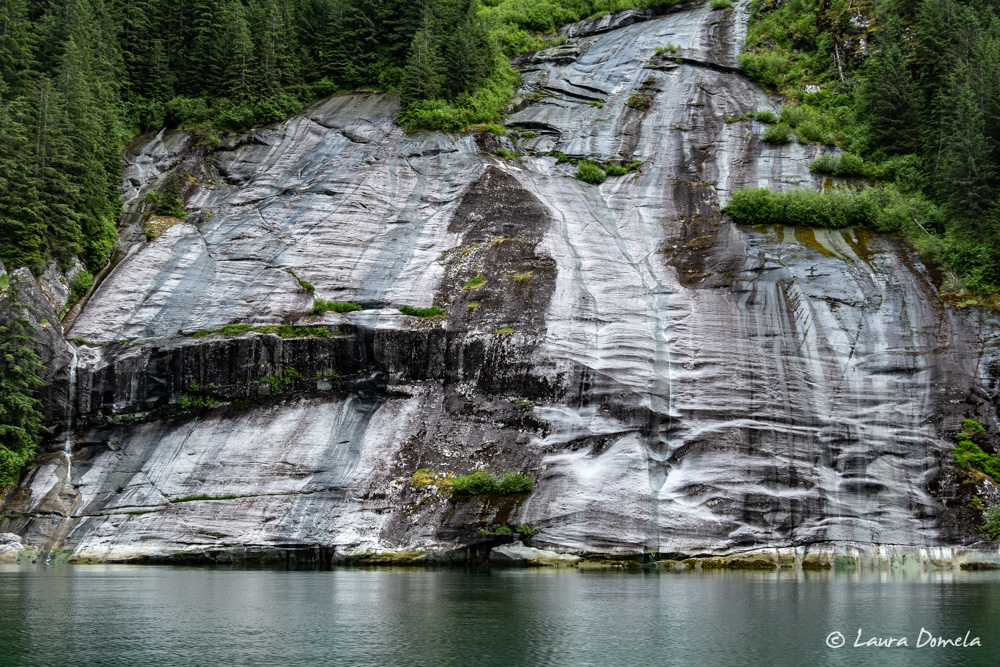 When the sun is shining, the water from higher up cascades slowly down this dark rock face and by the time it ends up in this little spot in the rock near the waterline, it’s warm enough to bathe in. (Yes, we know this from experience!) 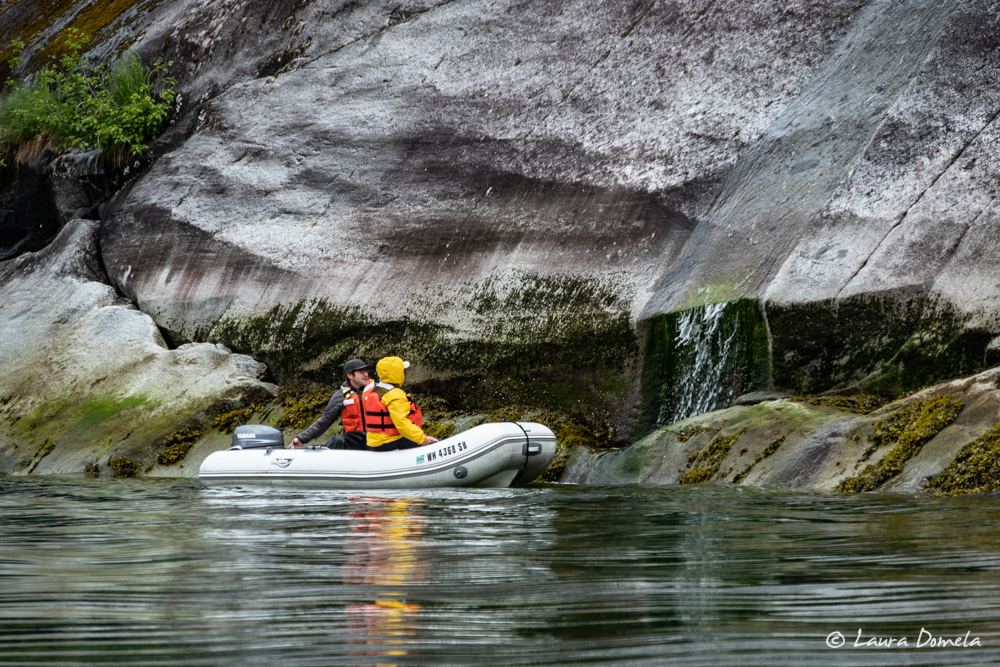 At the entrance of Ford’s Terror the current was ebbing through the narrows but not too strongly and there were no overfalls.

Laura, Kevin, and Ralph each did a bit of kayaking before dinner, and then most of the group gathered for dinner on the Airship/Safe Harbour raft. Dan and Kevin grilled the shrimp that Dan caught, Eileen made some delicious risotto, Laura made a spinach salad, Sam baked some garlic bread, and Ralph brought over a cheesecake!

Dinner was interrupted by a rare Alaskan squall! First, it got dark. Then rainy, then windy. Buckets of rain poured from the sky and the wind quickly accelerated to 30 knots. The anchors held, though, and as soon as it began it was over, leaving a magnificent rainbow behind. 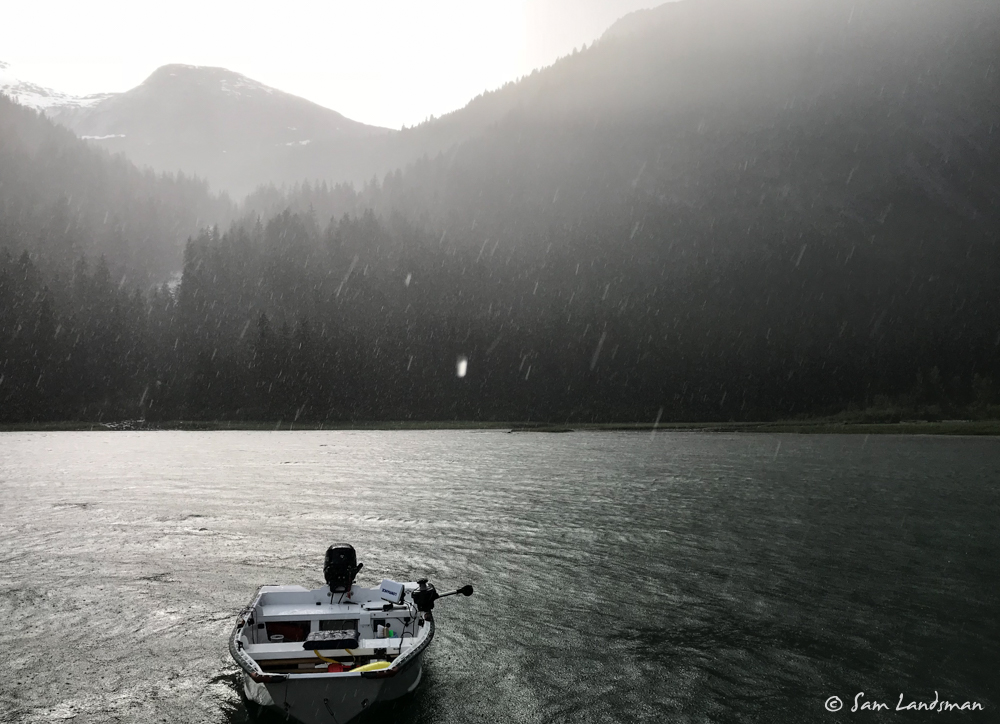 Alas, our time here would not be entirely alone. Around 9:30 p.m., Discovery, a classic wooden charter yacht, and Island Spirit arrived. Discovery is pretty enough to add to the scenery! 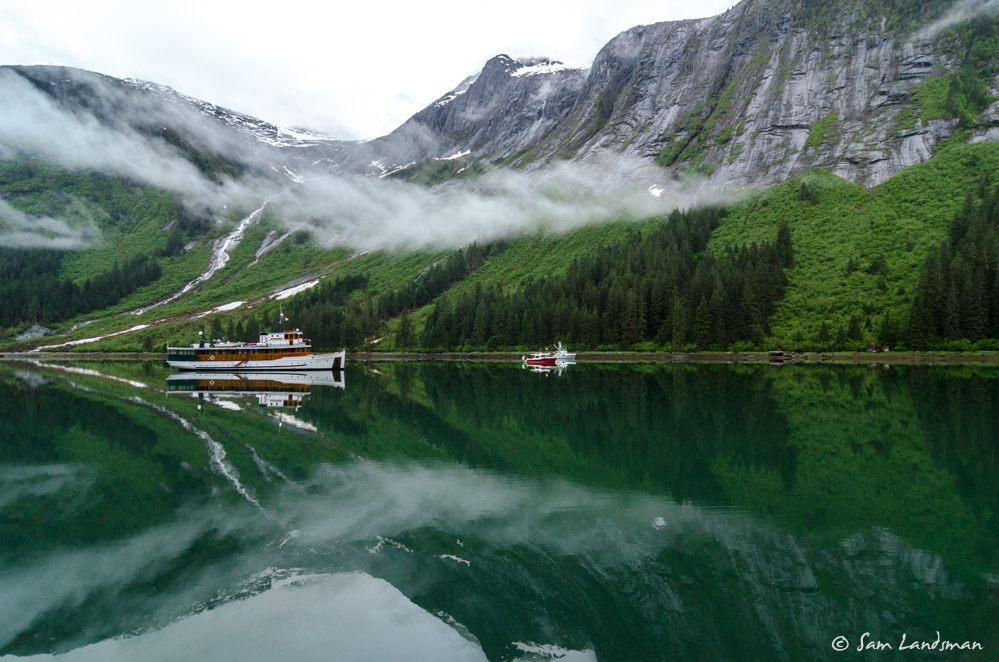 Here’s a map of our dinghy excursion early today: 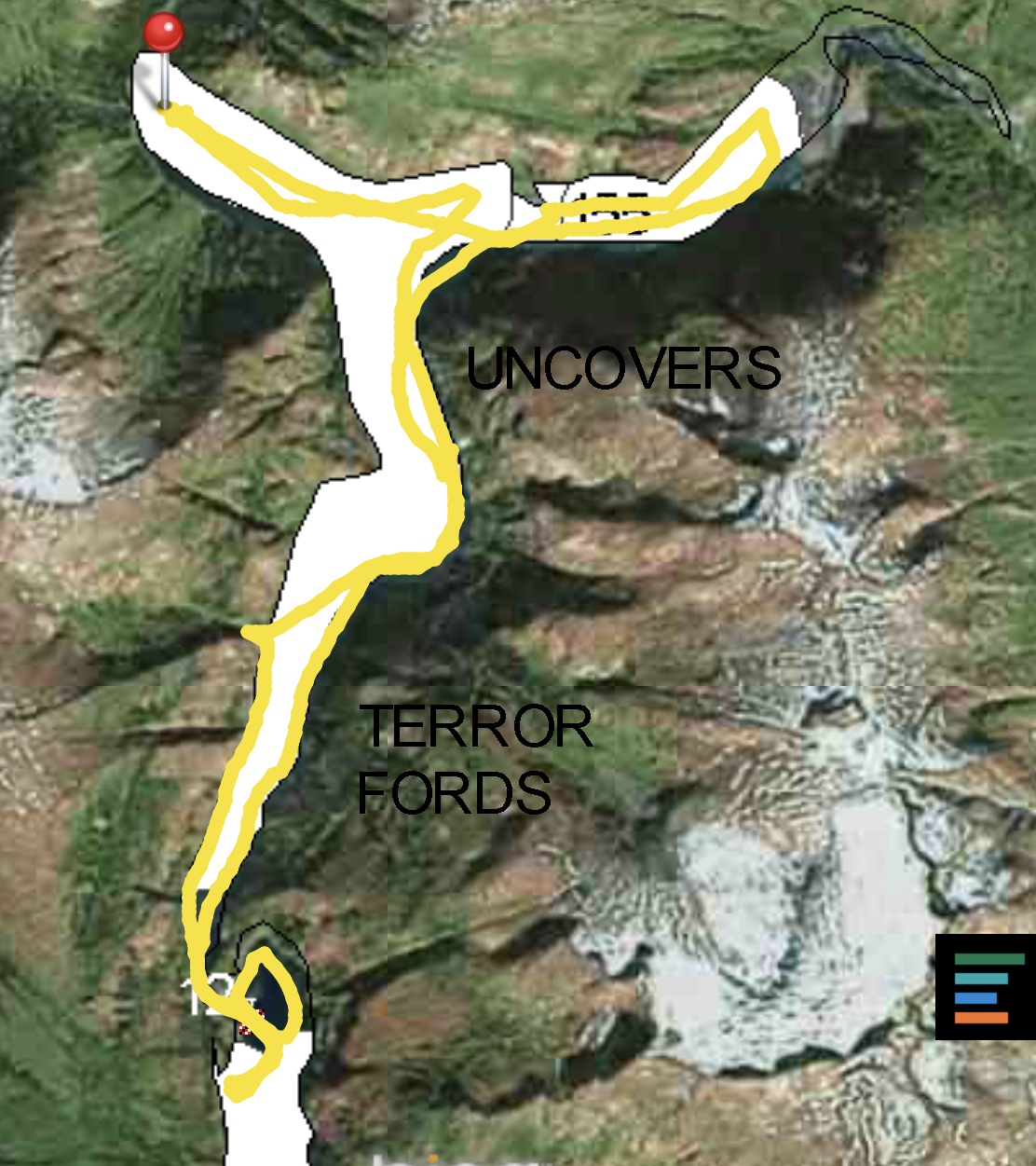