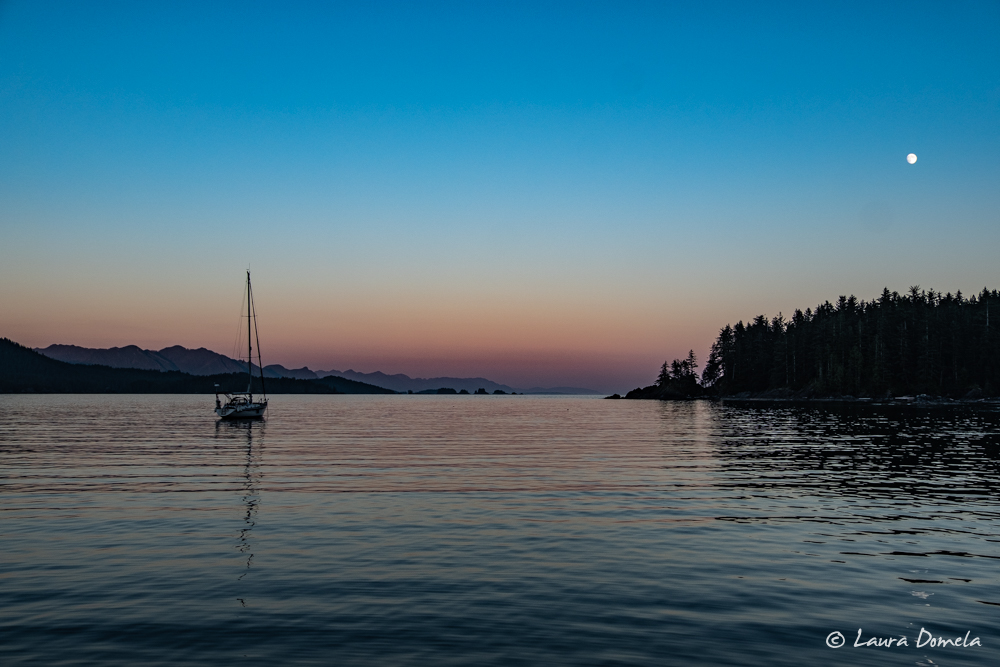 The problem is that it juts a dozen miles seaward from the Vancouver Island shore. Wind funnels around Cape Cook and Solander Island. When the rest of the coast is reporting light winds, it’s not uncommon to see 25 knots at Solander Island.

Today looked like the best weather for a week or more. Environment Canada predicted northwest 15-25 knot winds, but the private models (Windy, Windfinder, etc.) looked quite a bit better. We knew the first twelve miles would be the worst, since the seas would mostly be on the beam.

We departed in fog and calm winds and quickly found the ocean swell. It was running a little bigger than we hoped, but the wind was calm and the ride acceptable. 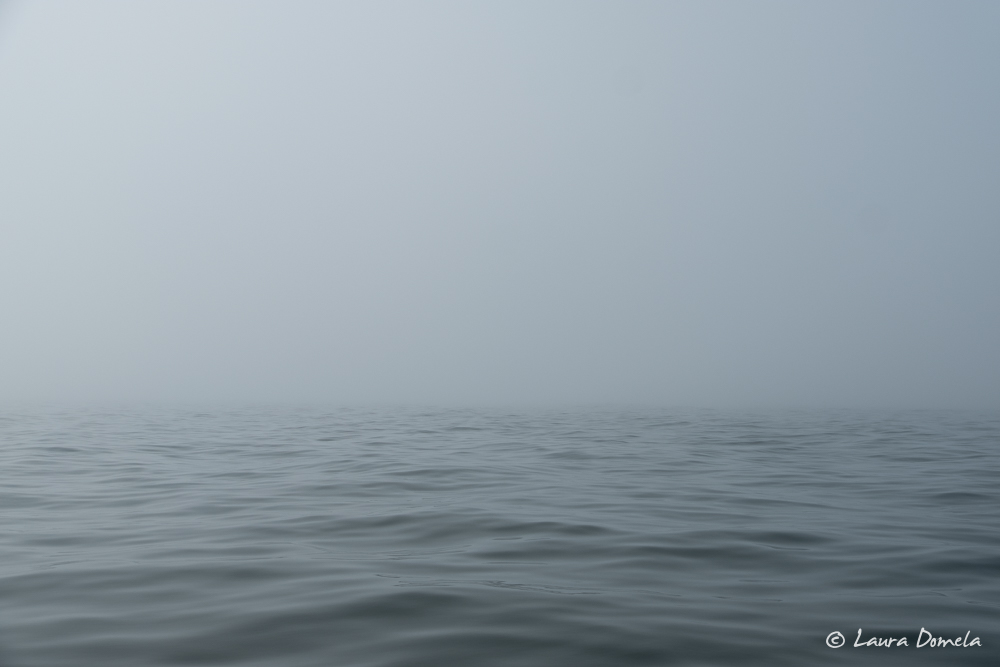 As we approached Cape Cook, the seas built and became confused. A half-mile off Solander Island, still in the fog (we never saw Solander) and with little wind, the seas were running 4-6 feet. Turning southeast and putting the seas behind us was a welcome relief from the previous 45 minutes of rolling around! 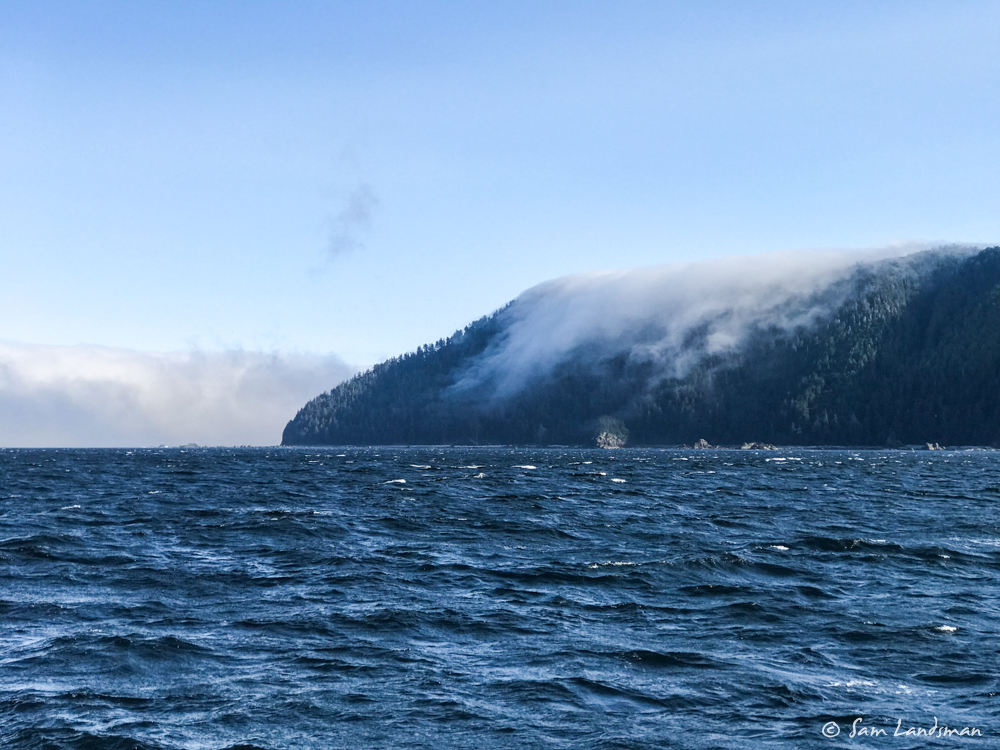 Brooks Peninsula is a little like Johnstone Strait on the Inside Passage: south of Brooks (or Johnstone), the weather is typically dramatically warmer and sunnier with much less fog. Sure enough, within a mile of turning south, the fog lifted, the northwesterly filled in, and the sun came out. We surfed our way down the coast, reaching 11 knots on the face of the swells and slowing to five climbing up the back. Fun!

Columbia Cove is a beautiful, scenic anchorage. A light surge from the ocean swell rolls through, not at all uncomfortable on this day. Hearing the waves rush around the rocks on shore is a different experience than we have on the Inside Passage, and we never tire of exploring the constantly changing intertidal areas.

One of our favorite things about Columbia Cove is walking the short (but primitive) trail to the sandy beaches on the ocean side. Getting to the trail is the hardest part, since it begins at the head of a long tidal flat. Last year we returned from hiking and had to drag the dinghy half a mile (or what seemed like it!) back to the water. This year, we landed the dinghies further out and timed our hike much better!

Note: Both Garmin and Navionics have the incorrect time for high and low tide in the Bunsby Islands – they’re two hours off! (Thus, last year’s mishap with the dinghies.) 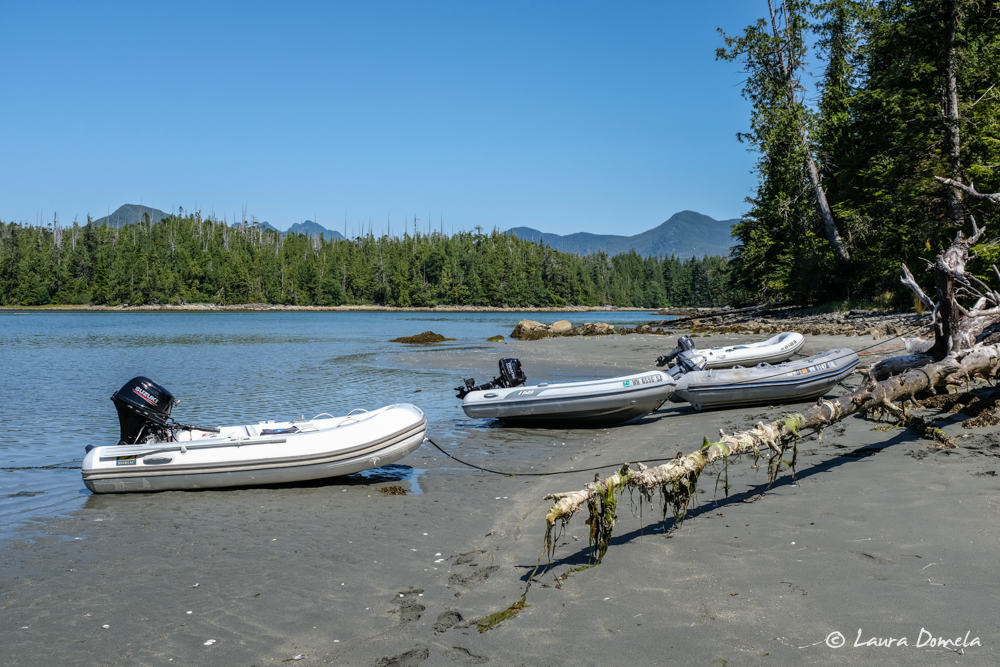 And finally, we’re at the beach! Looks almost tropical doesn’t it? 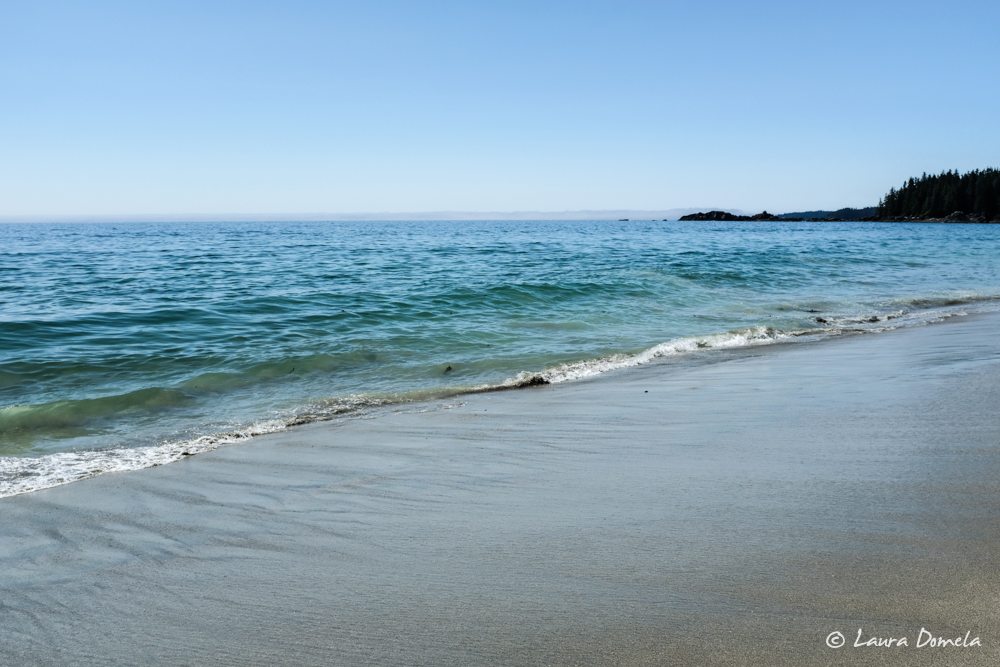 Mike went in for a swim–a very brief swim! 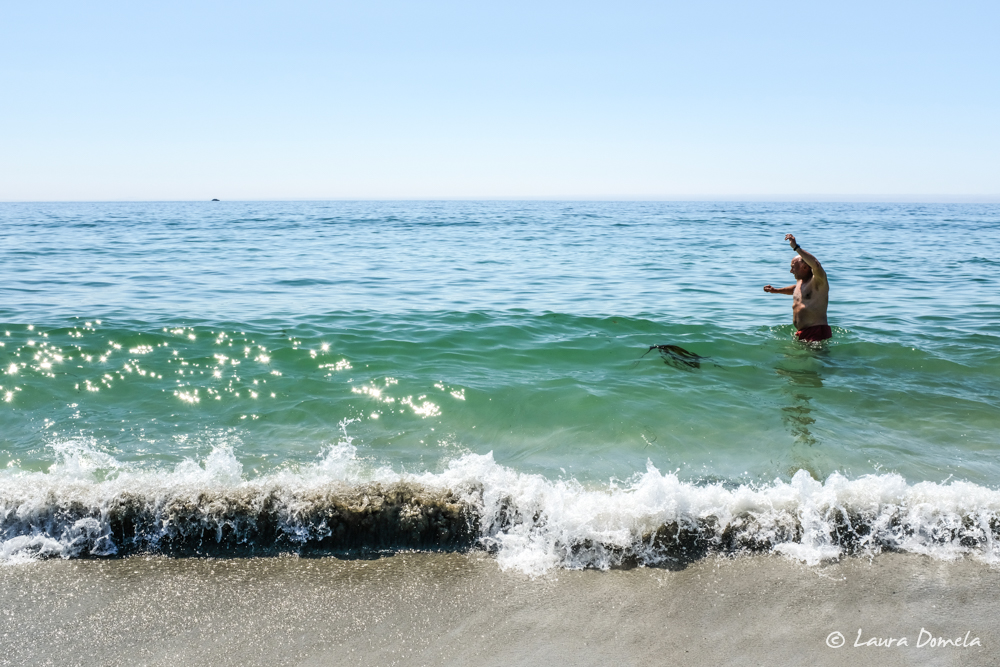 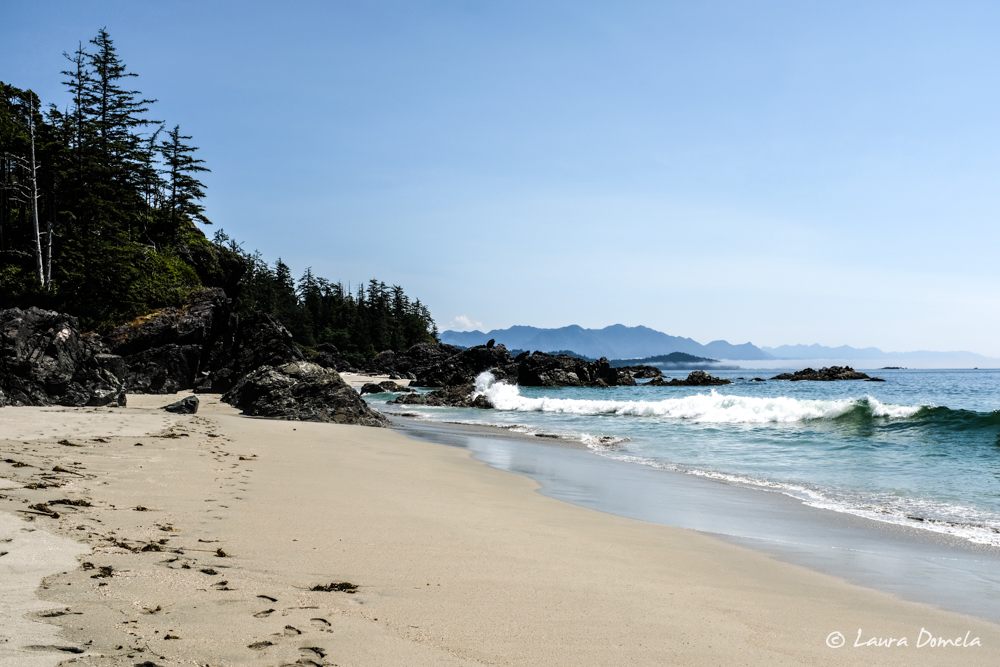 These sandy beaches are breathtaking—expansive, bounded by dramatic rock formations, uncrowded, with a gentle surf breaking ashore. We relaxed in the sun, dipped our feet in the ocean, and quickly forgot about any discomfort rounding Brooks this morning. 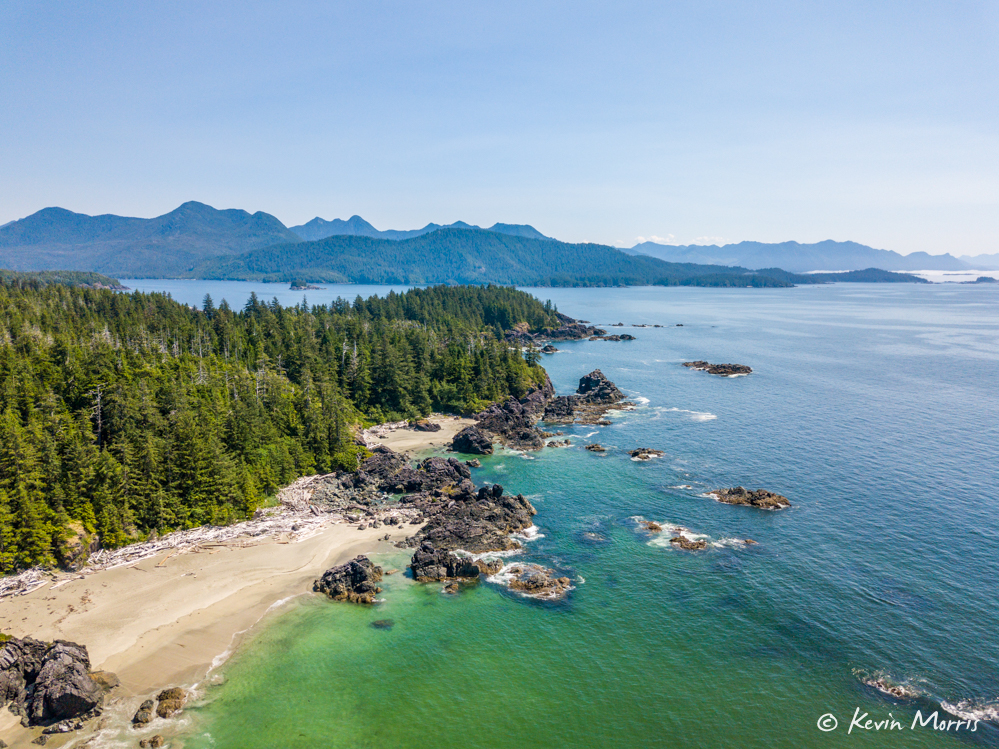 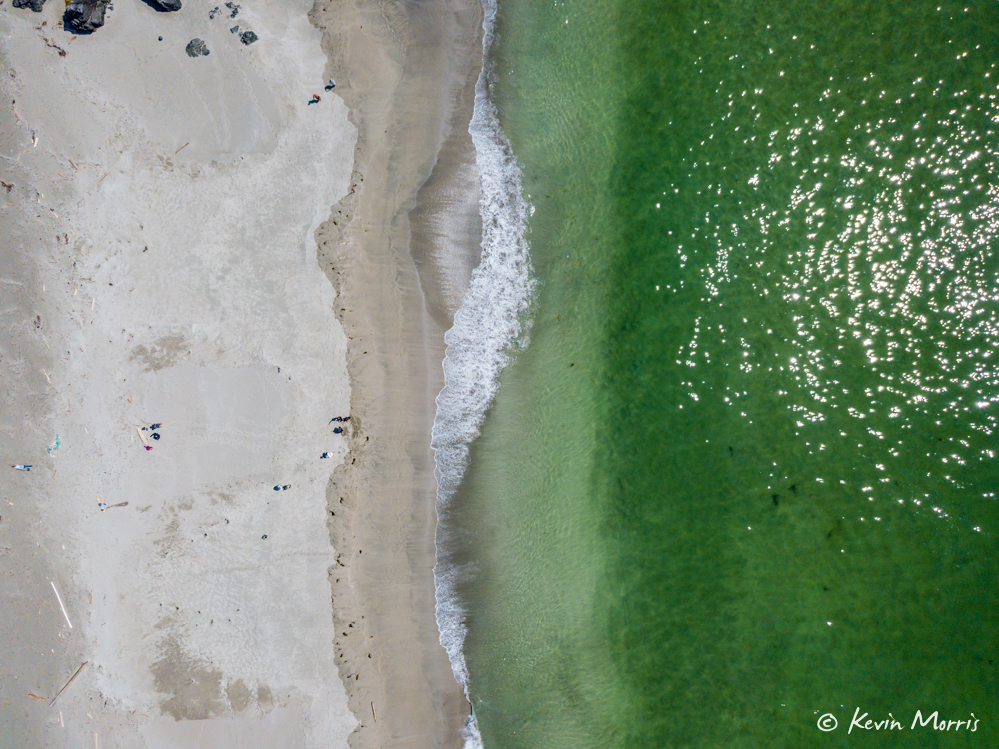 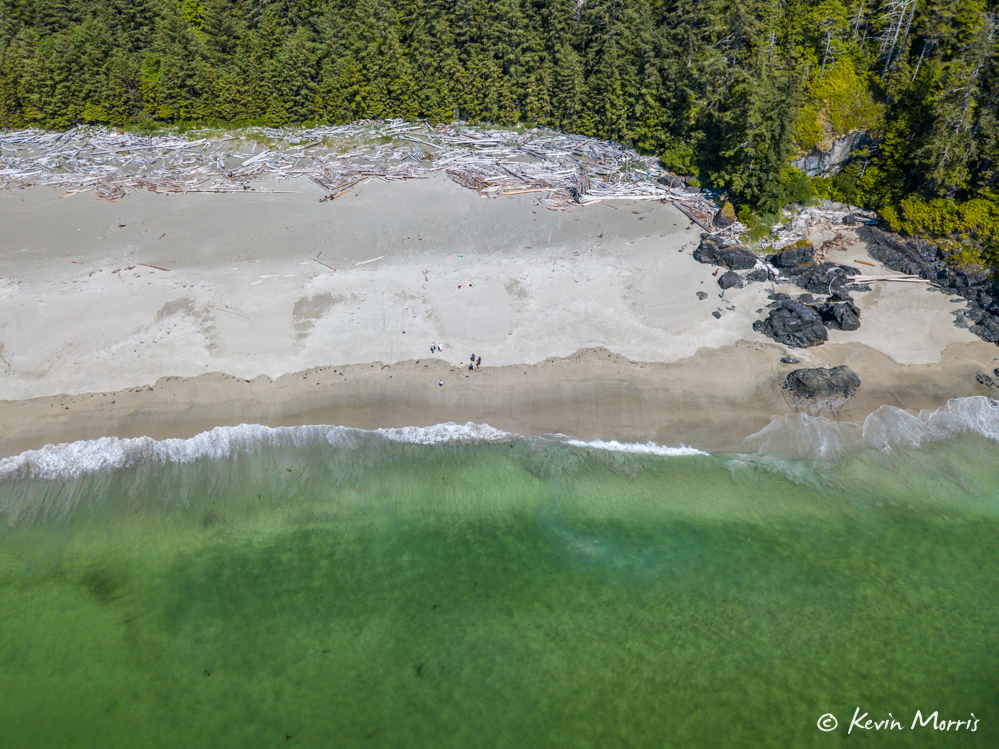 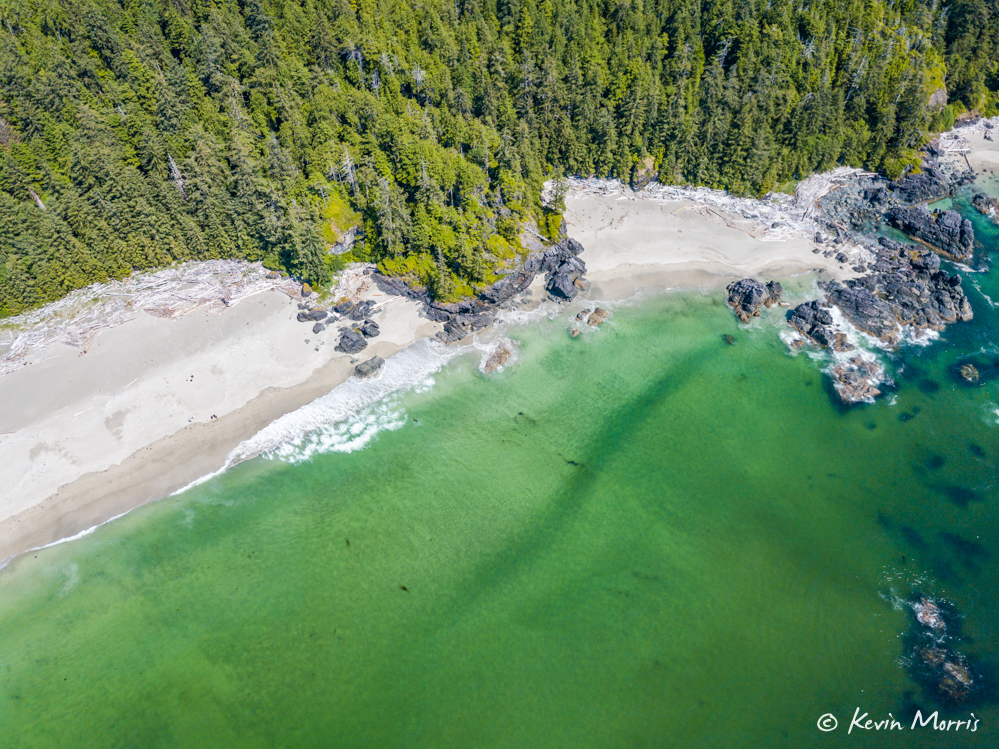 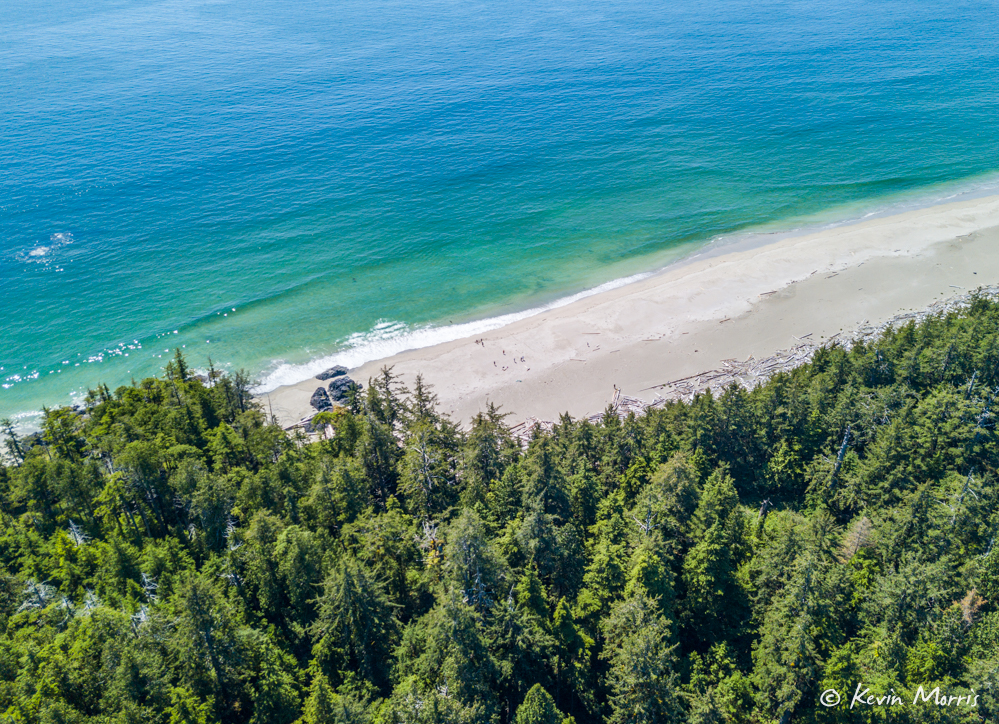 This shot is looking back toward the anchorage, and where our dinghies are moored: 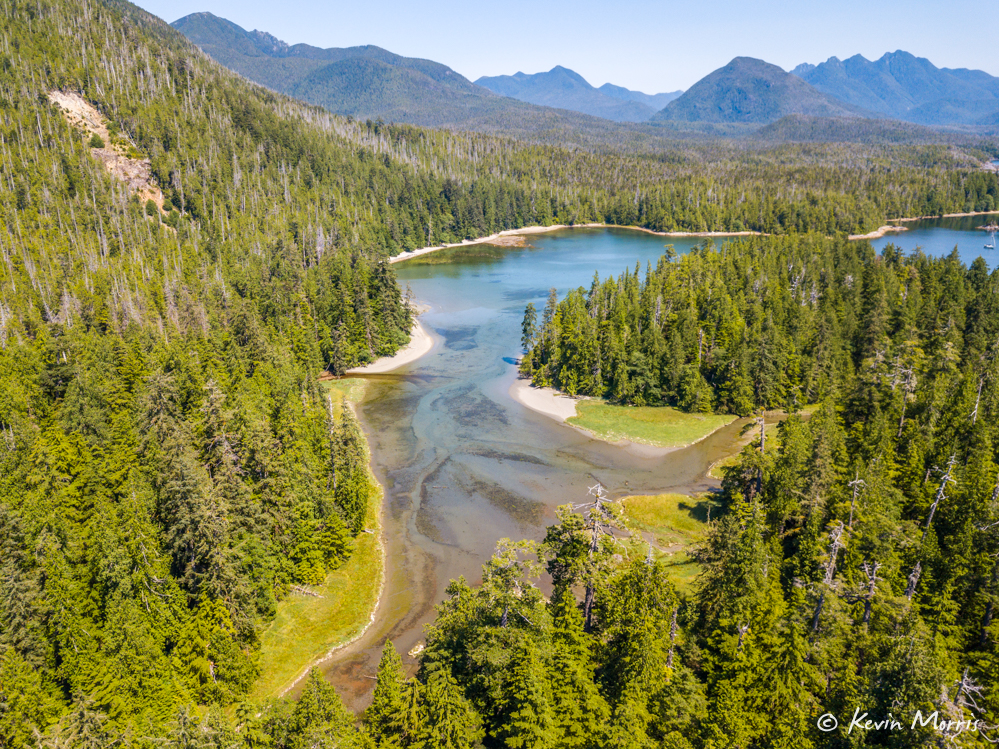 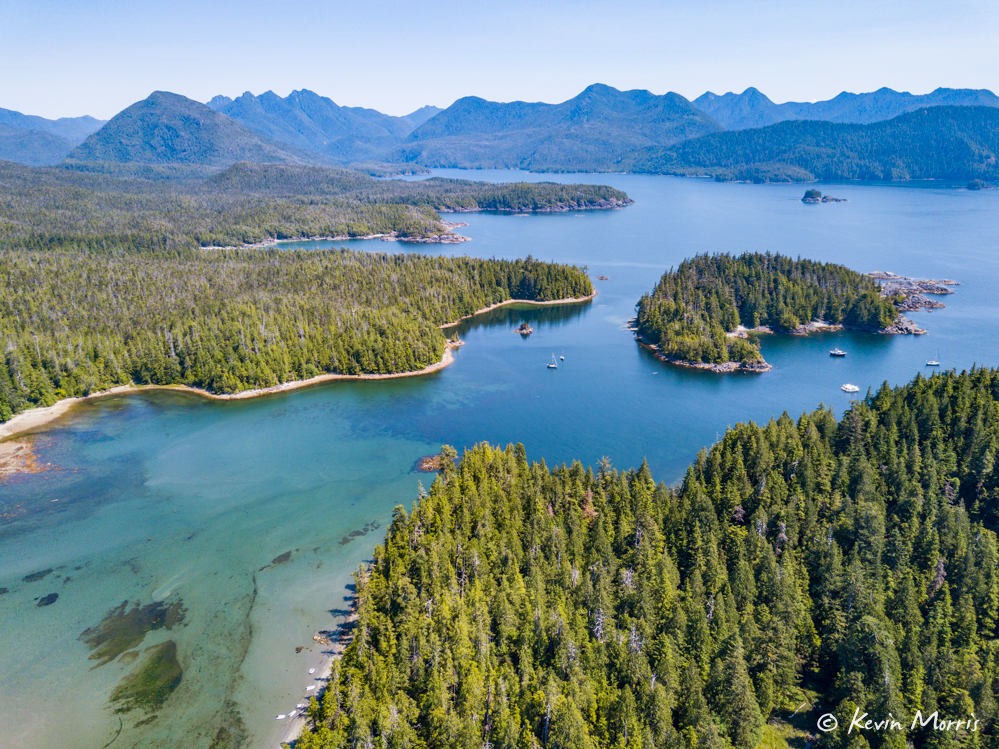 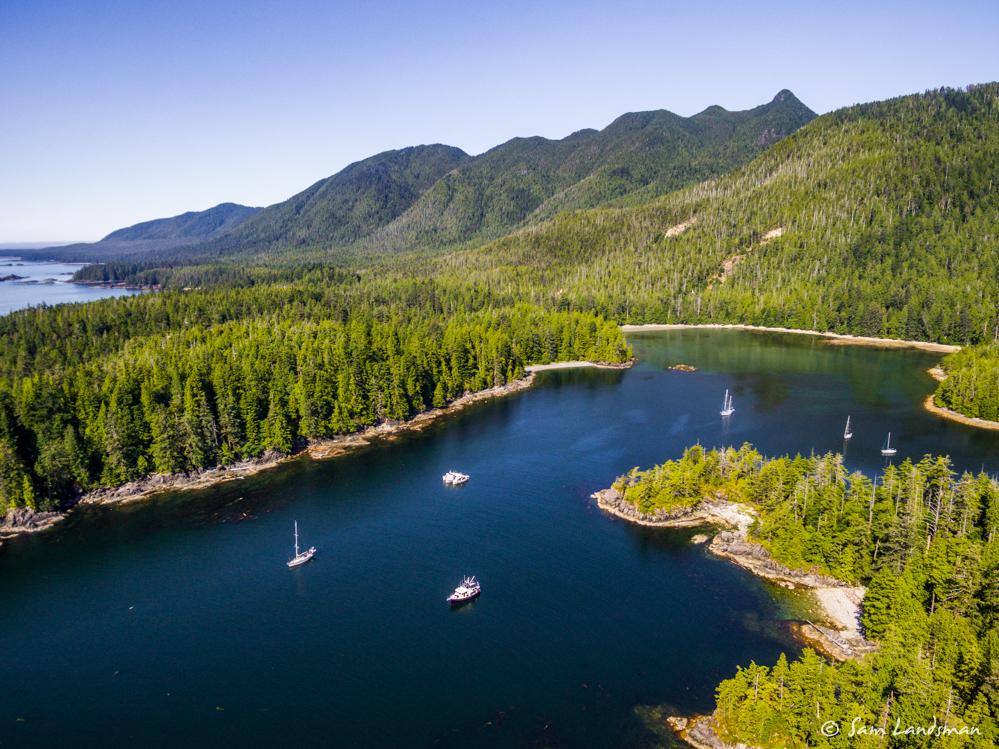 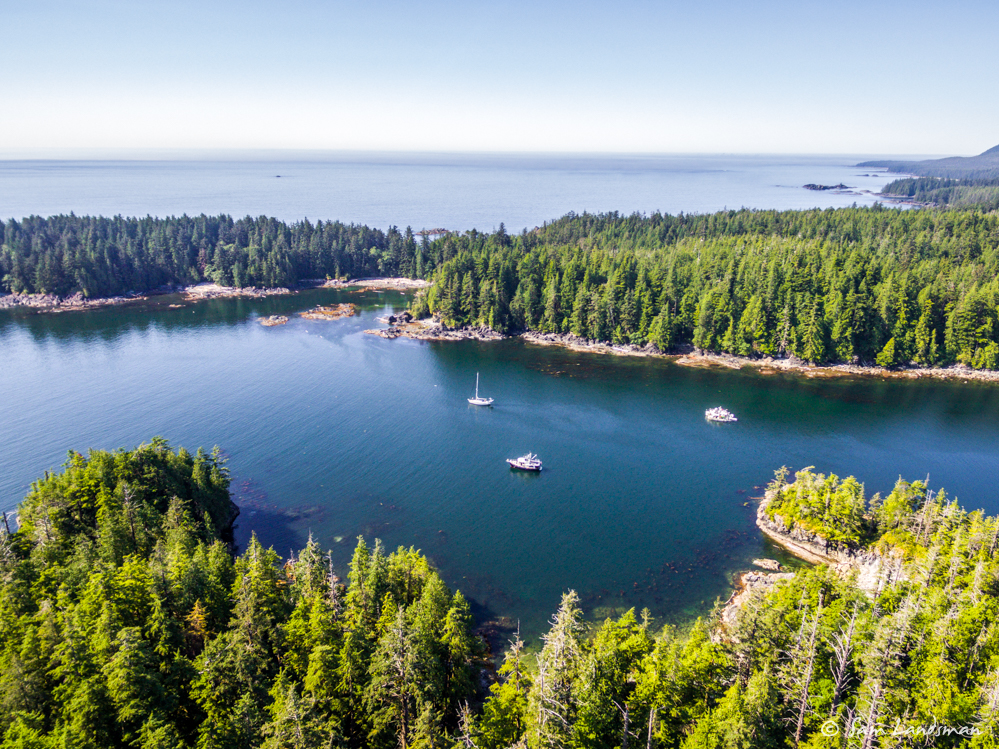 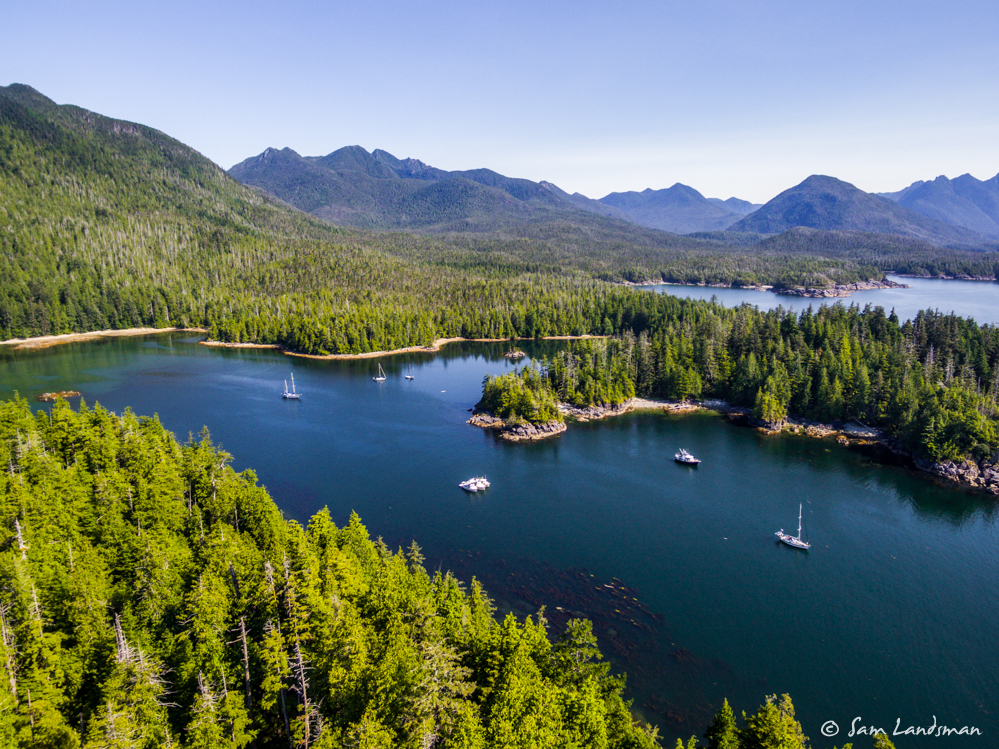 The beach on the ocean side, on the left, and our anchorage on the right: 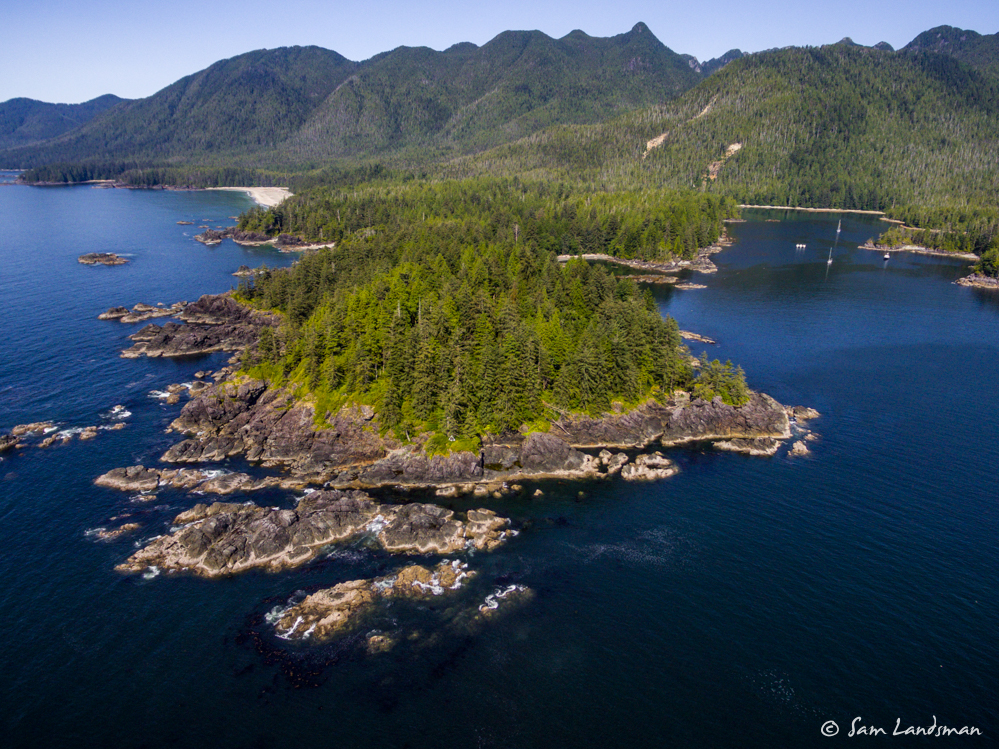 After the hike, we explored the area, some by dinghy and some by kayak. 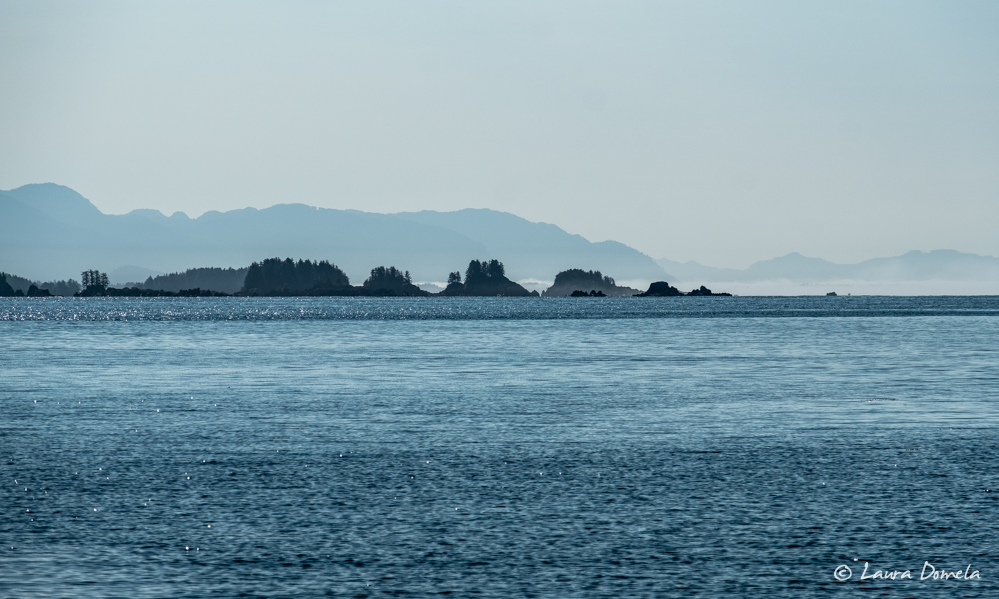 In the evening we all gathered on Safe Harbour/Airship for another fantastic dinner…crab dip, grilled steaks and chicken, salads, corn on the cob, blueberry cobbler, brownies. Sam got some great shots with the drone of the raft at happy hour. 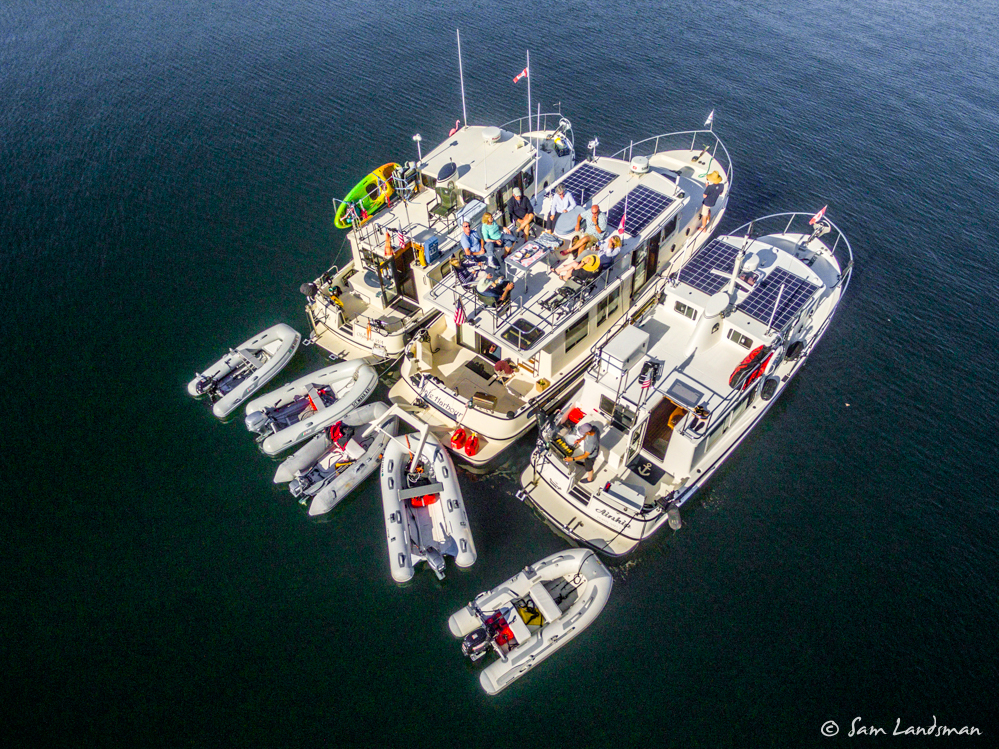 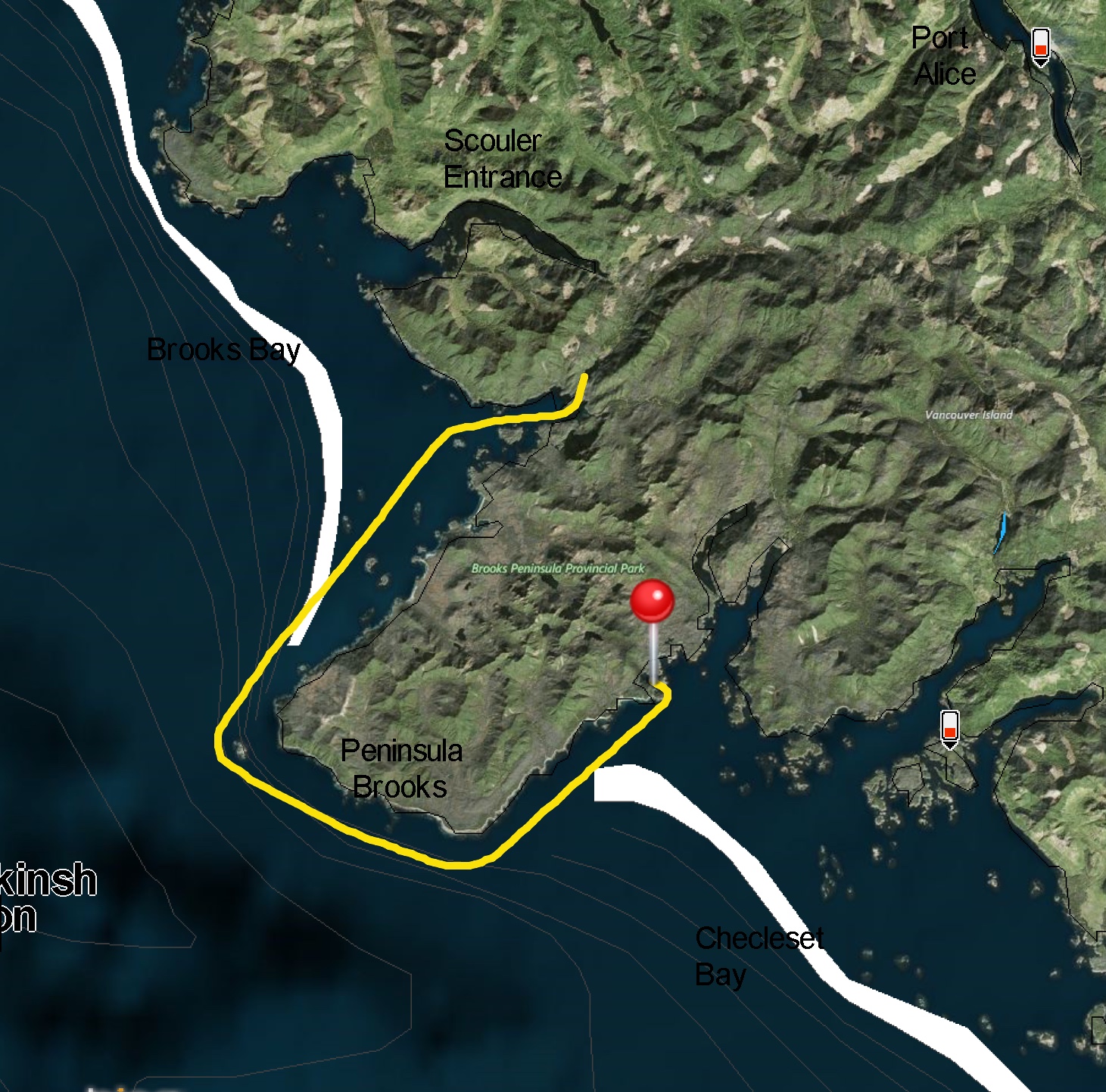