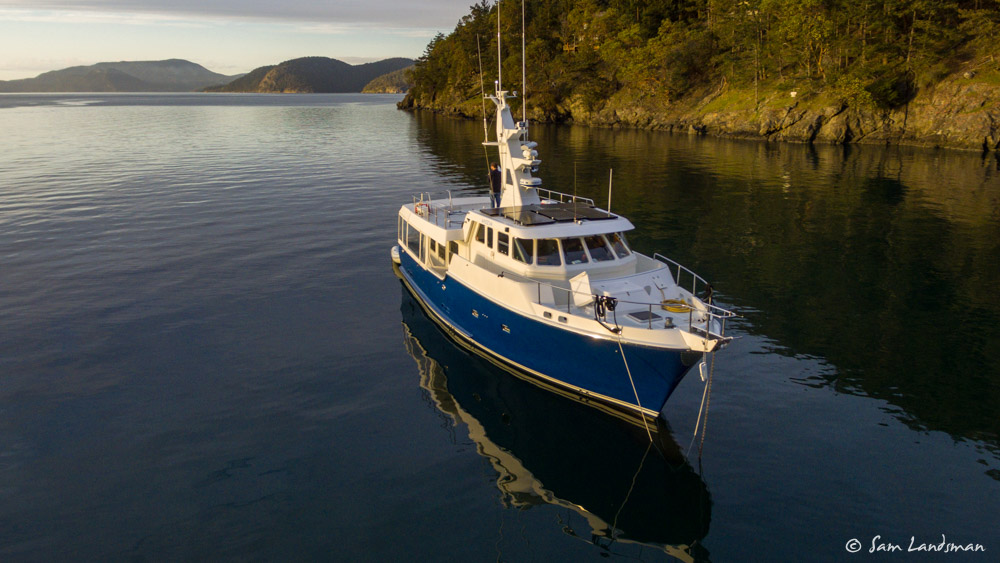 First of all, apologies for the looooong delay in posting.

Much has happened since my last update here. After six years and more than 3500 hours on Safe Harbour, my Nordic Tug 37, I traded her for Akeeva, a Nordhavn 50. As that was happening, the coronavirus situation was rapidly deteriorating. Within days of buying Akeeva, and on the eve of Washington’s stay-at-home order, Anna (my fiancée) and I practically moved aboard, opting to shelter-in-place at a slip we’d rented in the San Juans rather than spend an undetermined number of weeks or months stuck in our tiny Belltown apartment. And eventually, like most other cruisers who planned to see Alaska this summer, we cancelled our plans (flotilla participants were given a choice between refund or credit for next year).

The coronavirus pandemic, for all its awfulness, has brought a few unexpected boating benefits. Anna, who has normal job, usually stays in Seattle all summer while I travel on the boat. We were supposed to be married in the spring and that (like all gatherings) was cancelled, but we’re spending more time together than ever before. We’ve enjoyed the boat so much that we gave up our Belltown rental, so at least for now, we are “full time cruisers,” slipless and enjoying the San Juan Islands wherever the cell signal is strong enough for Zoom calls. Instead of moving anchorages every day like I usually would, we’re often staying three or four days. The dinghy is starting to grow barnacles.

I bought Akeeva to see the world, not sit at anchor in the San Juans, but she’s proving remarkably capable as an autonomous floating home. During one stretch we went more than six weeks between plugging into shore power or filling up the water tank from shore. A huge chest freezer, large fuel capacity, robust electrical system, washer & dryer, and 50 gallon-an-hour watermaker make living on the hook as comfortable as living in a slip, but with a much better view. Still, we’re eager to use Akeeva as intended. Cruising plans include Prince William Sound, the Sea of Cortez, and eventually a trip across the Pacific.

Sharp eyed readers may recognize Akeeva from our inaugural Slowboat flotilla. I was impressed by the boat on that trip—her ability to easily cruise at 8 knots, her comfort at sea, her spacious, easily navigated interior layout, and well laid out machinery spaces. Parker and Carol, her capable (and wonderful!) previous owners, lavished Akeeva with care and upgrades. Over the coming weeks and months, I’ll add some more posts with first impressions of the boat, plans for upgrades, and maybe some stories of our adventures (and misadventures) so far.