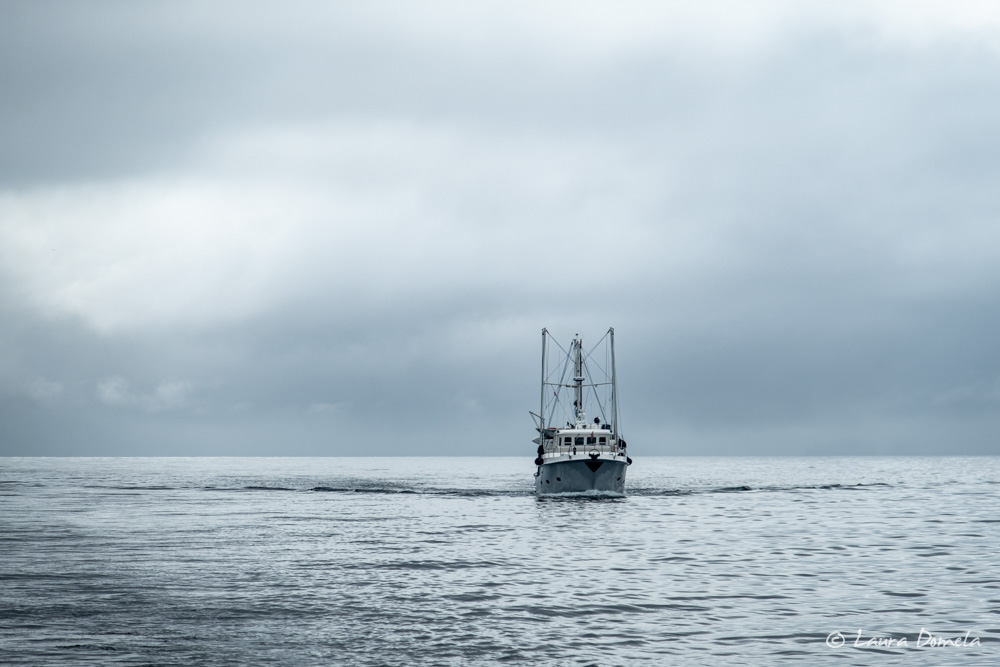 Today we left the Broughtons. We’re constantly amazed at how quickly the miles tick by. A week after leaving the San Juans, we’re further north than many cruisers make it in a lifetime. Granted, our cruise thus far has skipped plenty of outstanding destinations, but that’s only because there are so many to see further up the coast. A week out, we’ve covered about a quarter of the distance to Juneau.

Summer seems to have arrived early this year! We’ve had lots of sun and there’s lots more in the forecast. Mornings have been overcast and calm, and when the sun breaks through, the northwesterly fills in. In order to avoid beating into the afternoon breeze, we left Pierre’s at about 7:00 a.m., destination Blunden Harbour. We were rewarded with a calm cruise. As we arrived, the sun broke out and the wind built to 20 knots. Good to be tucked in!

Wildlife seen today on our route: one humpback, a couple of seals, and a large pod of Pacific white-sided dolphins. They were mostly busy fishing, but several came over to surf Airship’s bow for a few minutes.

Blunden Harbour is a spacious anchorage, but we invited Ralph (Ranger Tug 27CB Rhapsody) to raft with us tonight. He may leave earlier than the rest to round Cape Caution tomorrow, and we figured it would be easier to chat about conditions in the morning after the 4:00 a.m. forecast if he was just right here! 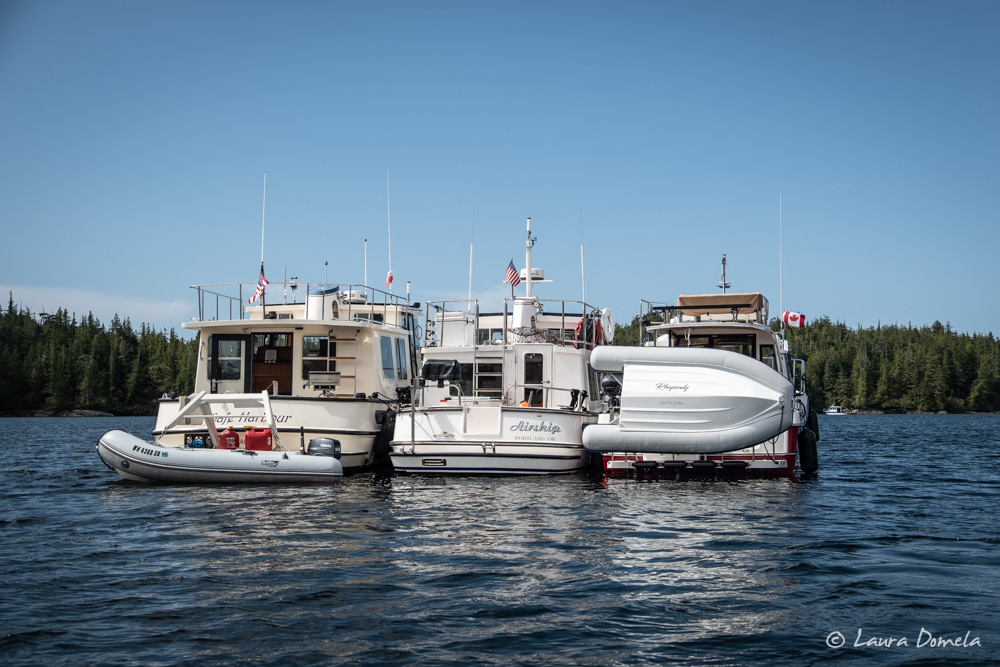 After everyone was anchored we all took dinghies over to see if we could get through the narrow rapids that lead into Bradley Lagoon. We had so much fun exploring this area last year!

We were right at high tide for Blunden Harbour, but the rapids were still flooding at about 6kts or so. Easy to get in and out though, and this gave us a good bit of time to explore the lagoon.

We recorded our dinghy trip with the Navionics app (yellow line is our route, and a little difficult to see) but if you click this link it will open a Navionics tab where you can play around with the map and see where we went. 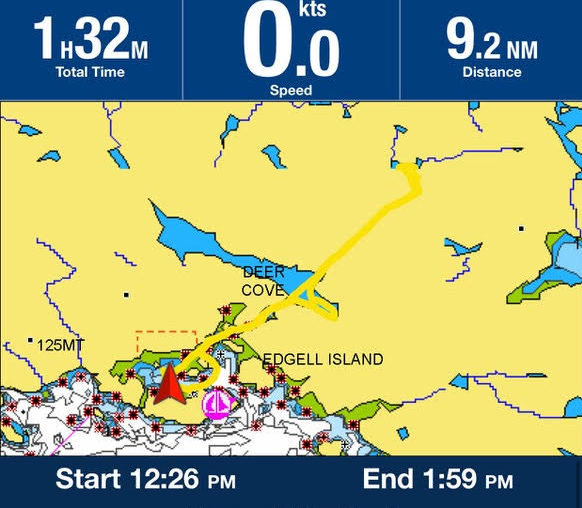 We saw a few shallow areas, but nothing shallower than 6ft. It pays to slow down for the unknown depths (and polarized sunglasses help!)

Ralph got some nice photos of us all while we were out exploring:

Back at the raft, Sam took up his drone and got some shots of our anchorage.

Everyone gathered tonight for dinner on the Airship/Safe Harbour/Rhapsody raft, where in addition to grilled halibut, fresh spot prawns, brussels sprouts, bruschetta, baked potatoes, and corn, we had briefing to discuss the details for tomorrow’s trip around Cape Caution.

Cassidy (the 7 year old) wrote up some darling invitations and handed one out to each boat, inviting everyone over to Cassidy (the Nordhavn) for dinner after rounding Cape Caution tomorrow. Fun! 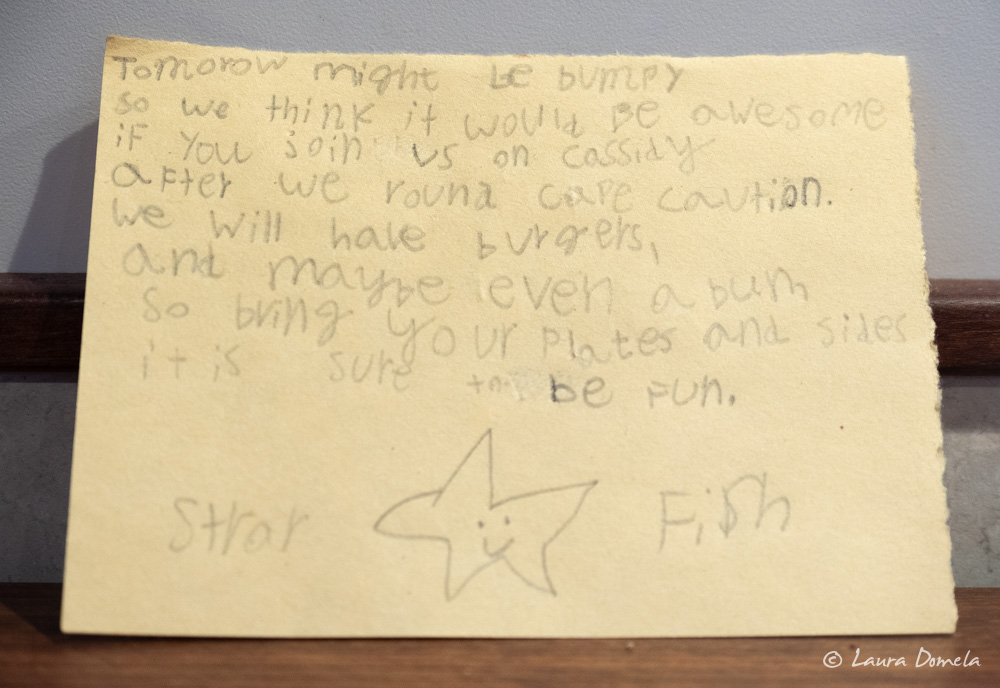 After dinner some of us took dinghies back out to the rapids to see how different the conditions were. The current was ebbing pretty fast but there was still enough depth to get in and out (well, mostly…Airship’s dinghy hit a small rock on the way in, but that prop blade was a tiny bit dinged already). 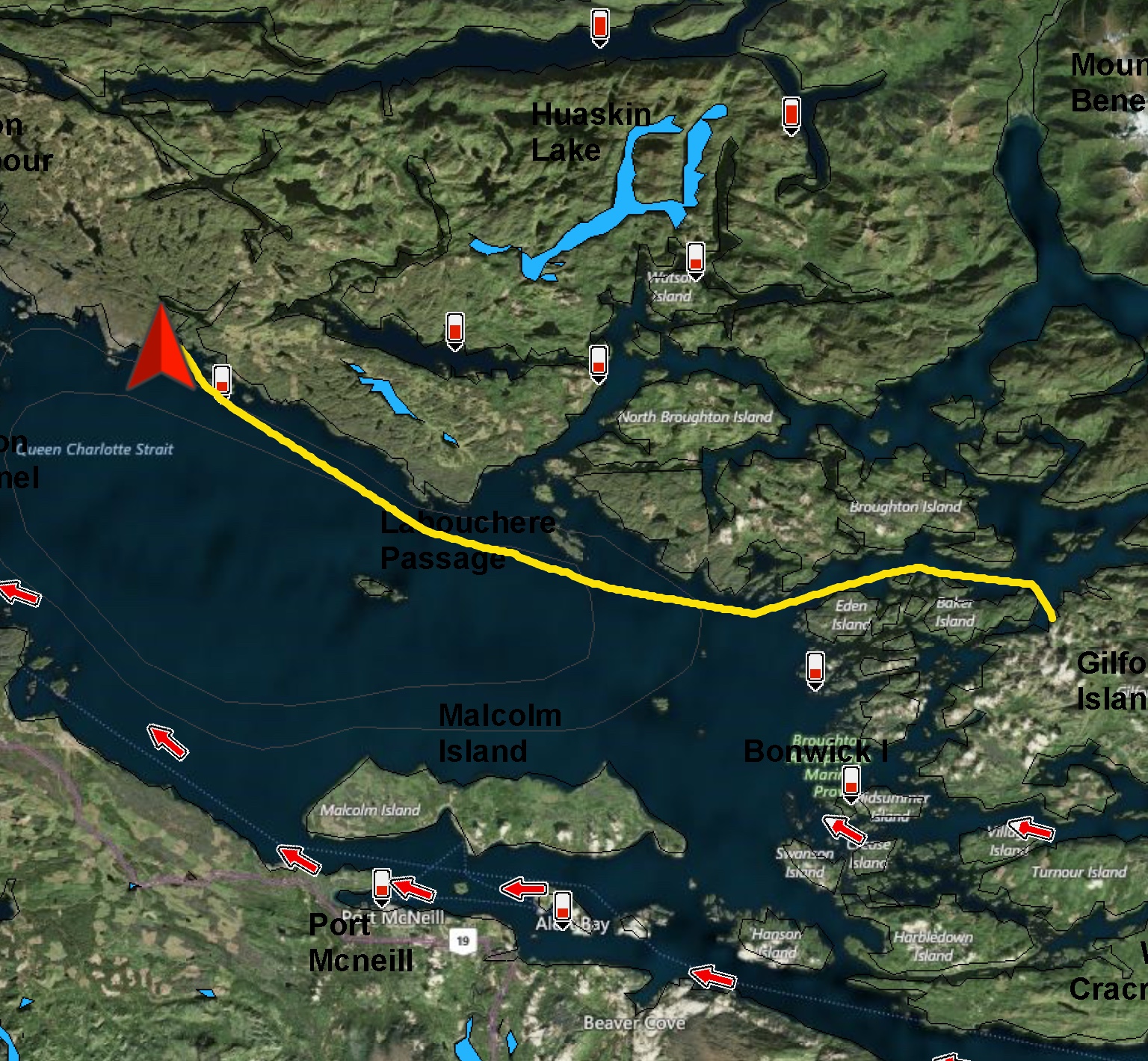 Mix ingredients together in bowl.
Serve with fresh sliced baguette
or spoon on top of grilled halibut.